American playwright Rajiv Joseph is a modern master of the two-man play. Across some of his other works (Gruesome Playground Injuries, The North Pool), Joseph is able to quickly establish familiar encounters between two people who find the oddest, yet relatable connections to each other, developing it over the course of his writing before ending it with powerfully emotional climaxes.

It is with this same deft hand that he writes black comedy Guards at the Taj, this time around focusing on the concepts of male friendship and morality, set against the epic backdrop of India’s Taj Mahal. Directed by Jo Kukathas, Guards at the Taj follows two long-term friends – stoic Humayun (Ghafir Akbar), the son of a general, and inquisitive, creative Babur (Jay Saighal), hailing from a more humble background, as they stand guard at the dawn watch on the eve of the reveal of the Taj Mahal. But beauty comes at a blood price, and it’s not long before their friendship is tested in the aftermath of a traumatic ordeal. 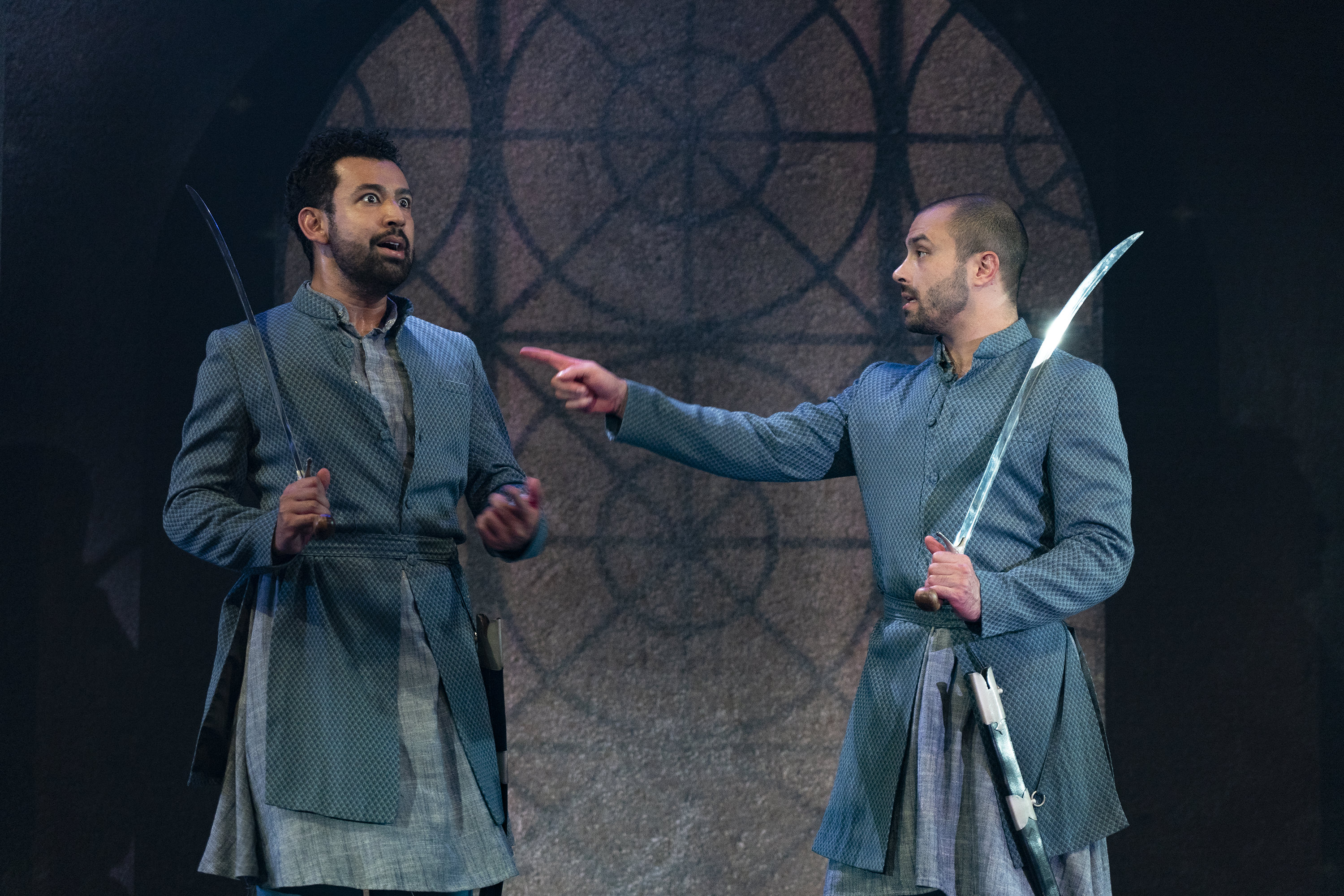 As simple as the premise sounds, Guards at the Taj is a multi-layered, textured play that in the hands of a seasoned director as Jo Kukathas, is stunning when brought to life. Well-researched and armed with a strong, clear vision of exactly how she wants the production to emerge, Kukathas more than capably directs the perfectly cast duo onstage in teasing out and portraying the many issues and themes Joseph imbues the script with. A key part of Guards at the Taj takes inspiration from the unconfirmed legend that then emperor Shah Jahan ordered the behanding of each of the 20,000 men who worked on the Taj in the wake of its reveal, determined to prevent another monument rivalling its beauty to ever be built again. 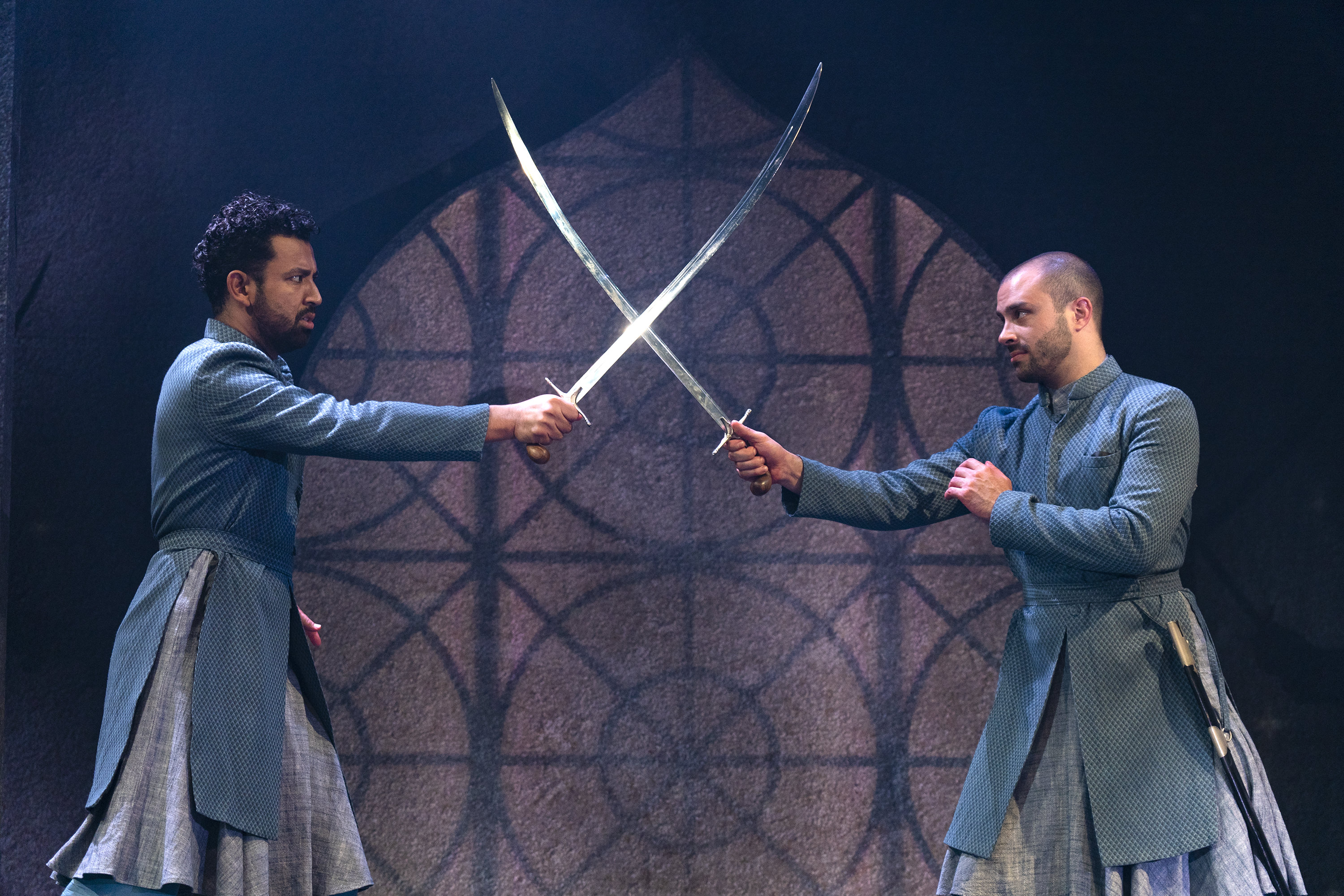 Through Joseph’s interpretation, this legend takes on a secondary interpretation, suggesting that the emperor may have believed that if ordinary men realised that with their hands alone they can create something so magnificent, then anything, even revolution, would be possible. Placing the two guards at the very centre of this bloody legend then brings to mind still more issues of the moral dilemma of doing a job that goes against one’s own personal beliefs, and the traumatic effects it can have on a person. 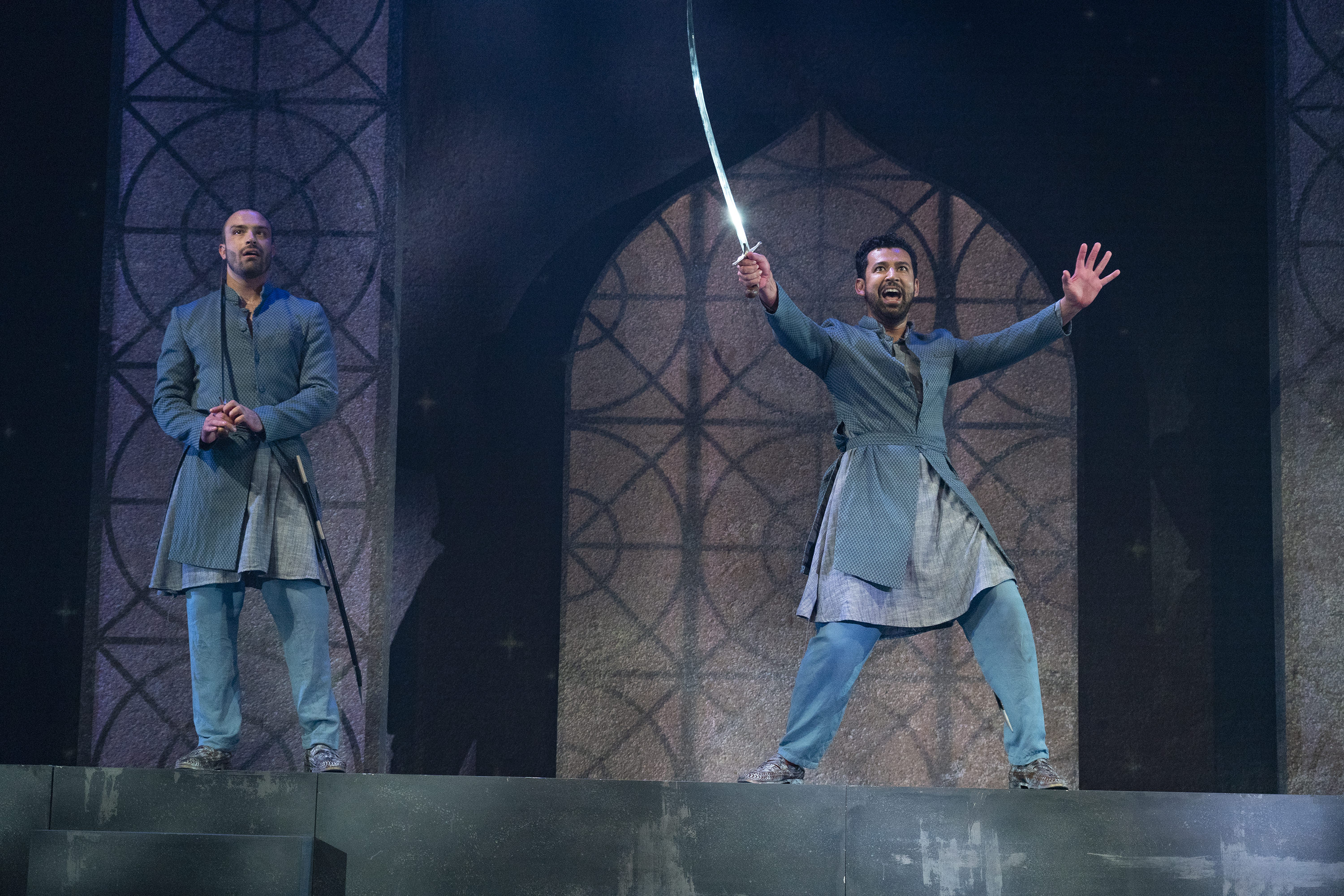 But beyond these big moral and political themes, it is ultimately the great onstage chemistry between Ghafir and Jay that makes this production as powerful as it is. From the moment they step out onstage, one feels as if Humayun and Barbur have known each other since the day they were born. With their contrasting personalities, the script allows for plenty of interesting banter and exchanges between the two, from a passionate discussion on the birds of India to excited fantasies of the Emperor’s harem. Finding themselves at loggerheads more often than not, it becomes incredibly rewarding in the brief moments they find themselves in agreement with each other, their friendship all but assured as they let slip a genuine smile at each other, an incredibly hopeful portrayal of true friendship between two men from completely different classes and backgrounds.

Individually, Ghafir Akbar delivers a performance worthy of a best actor nod as he brings Humayun through a roller coaster of emotions – the enthusiasm of a bird enthusiast speaking of his pet subject, to the pure agony of being forced into committing an act completely against his morals and beliefs. Perfectly complementing this performance is Jay Saighal, whose portrayal of Barbur delivers unbridled optimism to match Humayun’s seriousness, making the eventual climax of the performance even harder to stomach, pre-empting the knowledge that a happy ending does not await both men at the end of the show. 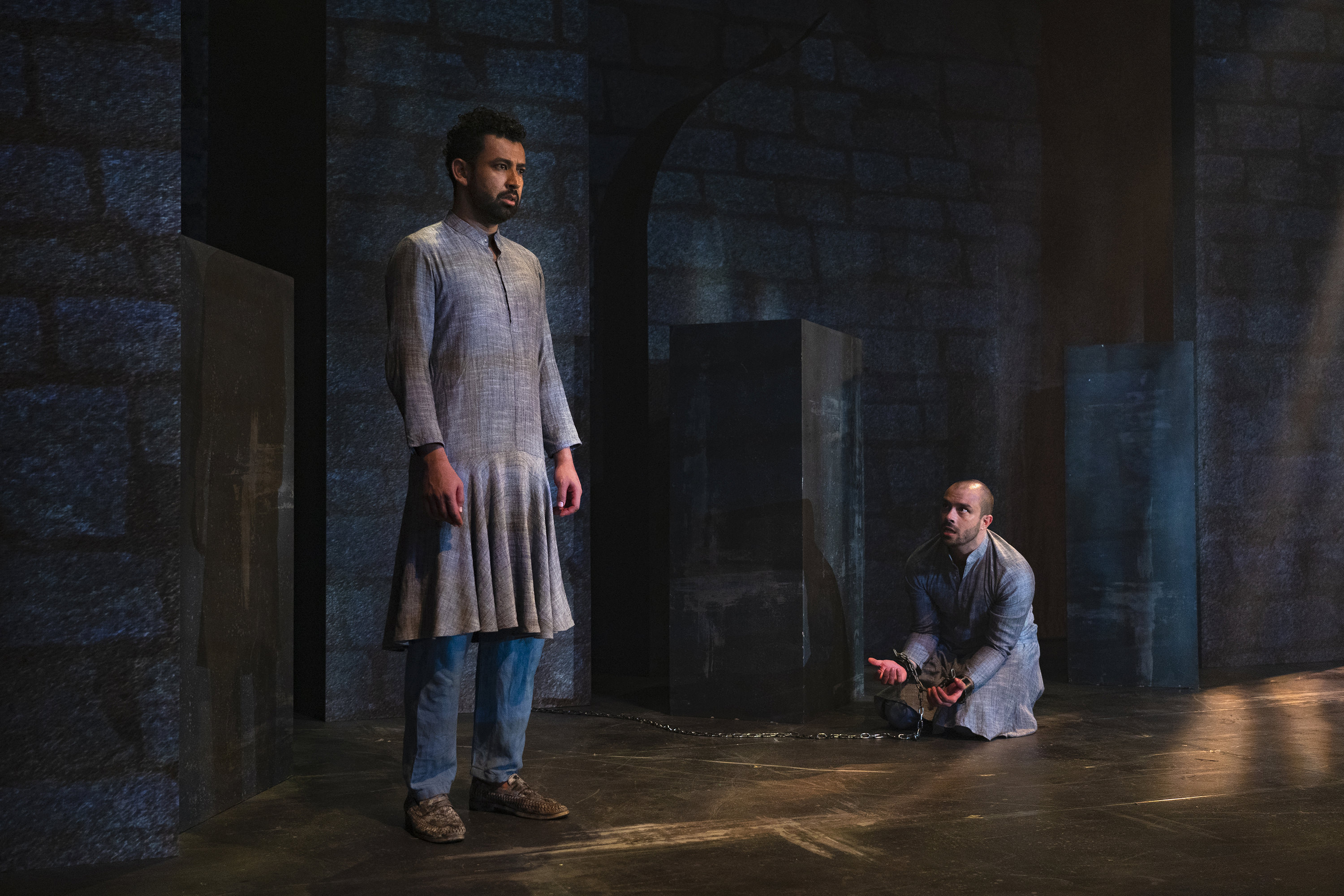 Simple in design but beautifully crafted with their strong silhouettes, Leonard Augustine Choo’s costumes feel grand and detailed in their design, befitting of guards of the Taj Mahal, while a complete one eighty degree mood is achieved when the guards don the ragged, bloody clothing down in the dungeons, amplifying them at their most wretched and miserable. Petrina Dawn Tan’s lighting and Brian Gothong Tan’s multimedia projections help bring each scene to life – one can envision and believe that one is standing outside the Taj with the celestial stars hanging in the clear night sky, while projection mapping technology is effectively used to create textured brick walls and the gloomy atmosphere of a palace dungeon. 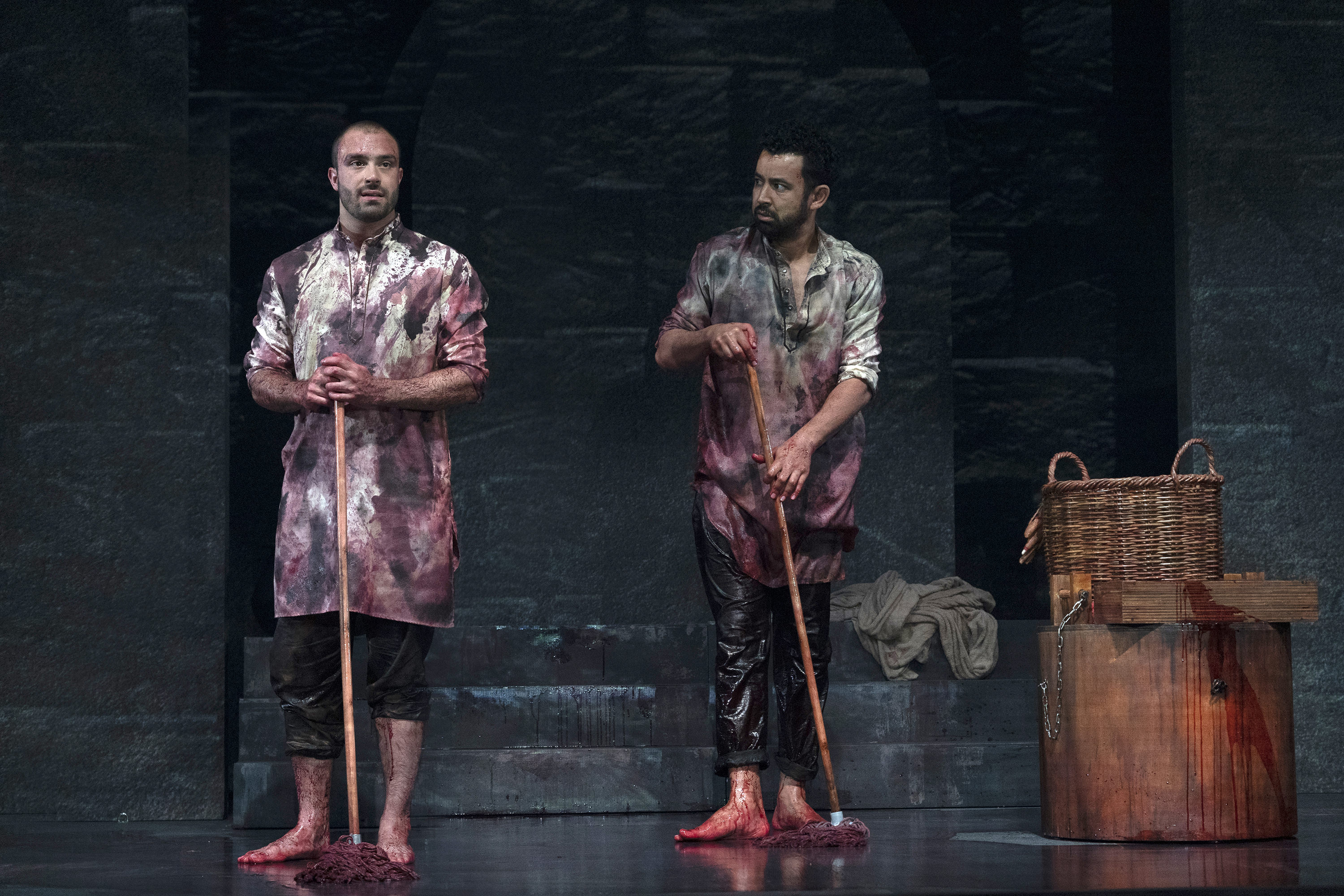 Meanwhile, Mervin Wong’s (theemptybluesky) score and Lee Yew Jin’s (Ctrl Fre@k) sound design come together to provide a powerful soundscape to bring each scene to life – grand cinematic tracks help add a sense of the epic during scene transitions, while there is a realistic, almost tangible atmosphere created onstage as we hear the sound of birds chirping, water dripping menacingly from pipes and the actors’ voices echoing through a damp dungeon, giving us the impression that we truly are deep underground, away from the surface world. Stage manager Neo Hui Jun and assistant stage managers Musfirah Kamsin and Jonathan Heng have done well with their small team to make scene transitions smooth, arranging the props and setpieces in precisely the right places. It is when all of these elements come together in the KC Arts Centre’s cosy, intimate space that the production is able to to fully bring out its beautiful darkness in every moment. 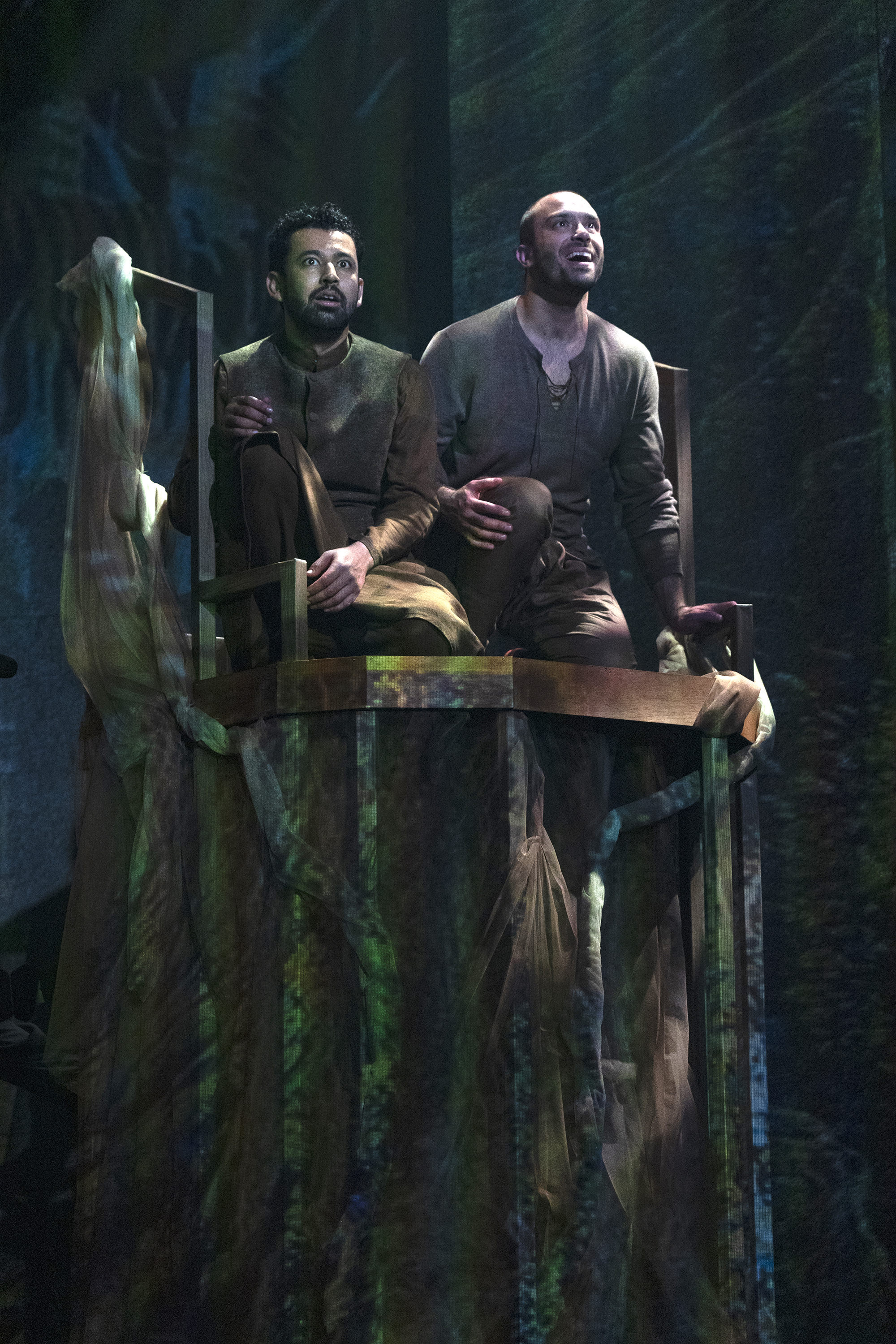 A well-written play is only as good as the creative team that brings it to life, and with Guards at the Taj, the Singapore Repertory Theatre has yet another real winner on its hands with a superb cast, intricate production and a director who knows exactly what she’s doing. A modern, epic tragedy in its own right about the loss of friendship against the backdrop of national bloodshed, this is one dark drama that’s managed to sear itself firmly into our minds like a cauterized wound, and one of the strongest shows of the year to end off Singapore Repertory Theatre’s 2018 season.

Guards at the Taj plays at the KC Arts Centre from 14th November – 1st December 2018. Tickets available from SISTIC

0 comments on “Review: Guards at the Taj by Singapore Repertory Theatre”