Black never goes out of style.

When one thinks of the cultural makeup of Singapore, rarely does Africa come to mind, let alone daily conversation. Yet, as Sharon Frese, Ng Yi-Sheng and Irfan Kasban reveal in their performance lecture Ayer Hitam, Singapore has plenty of surprising ties to the continent, as they uncover the hidden black history and African disapora of our island home. 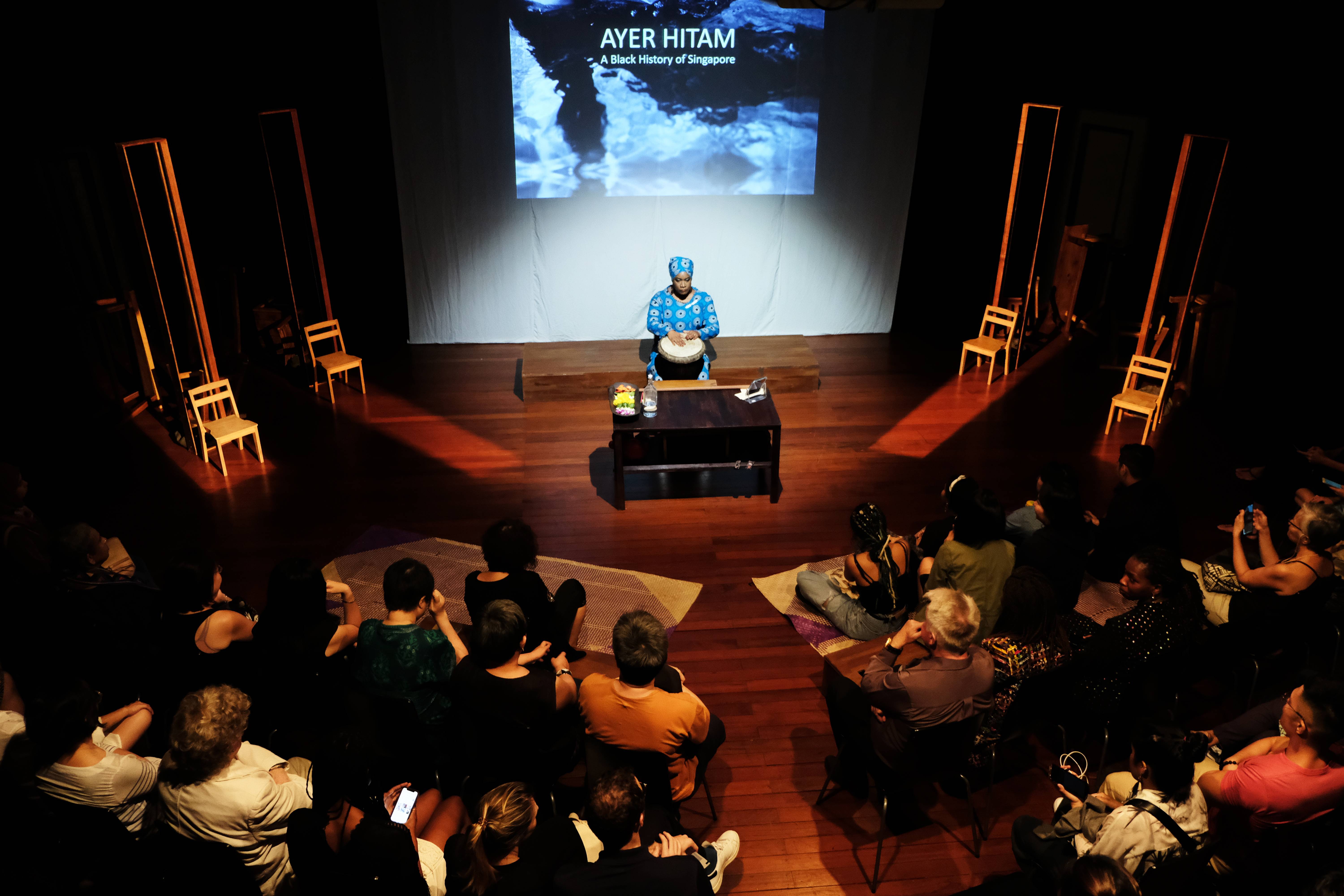 As a performance lecture, the bulk of the show is information heavy, akin to a university lecture delivering historical facts and unloading cultural tidbits onto the audience. Thankfully, buoyed by Sharon’s vibrant personality and the sheer amount of joie de vivre emanating from every fibre of her being alone makes this a show worth watching as she enthuses and waxes lyrical about local black history. 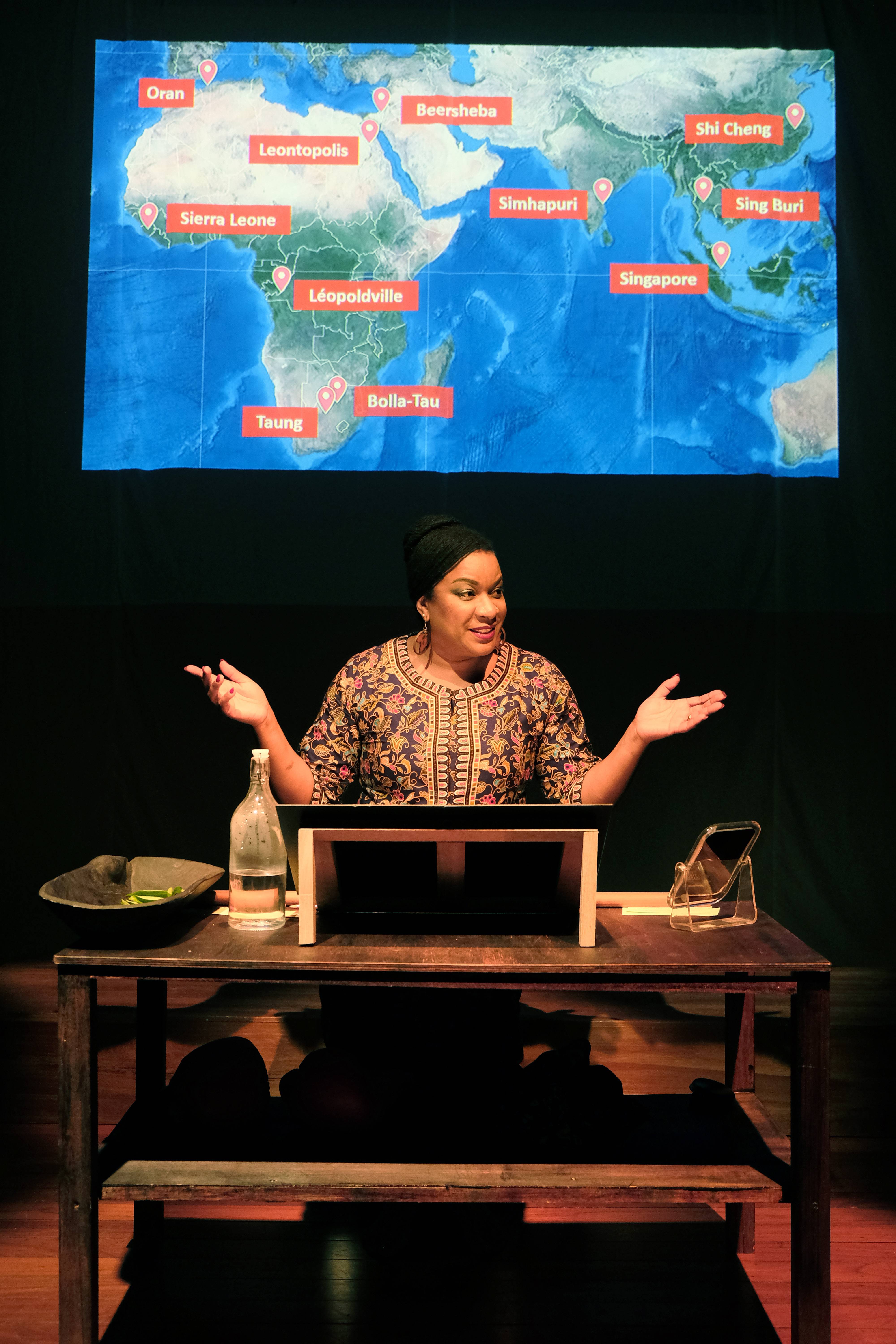 Sharon begins the performance swathed in blue, a map of the continent of Africa in her earrings to ensure she always has a piece of Africa with her, paying homage to her ancestral heritage as she plays the drum, almost as if she has begun the process of a powerful ritual in educating this audience. It’s not long however, before she strips this off to reveal her true costume for the night – a batik sarong kebaya, immediately recognizable as the costume of our national icon, the Singapore girl. Herein lies the crux of why Sharon is the best person to deliver this lecture – having lived in Singapore for the last 10 years, completely immersing herself into our culture and people, Sharon is as Singaporean as it gets, and essentially presents an amalgamated visage of both Africa and Singapore, as she says an obatala prayer before beginning. 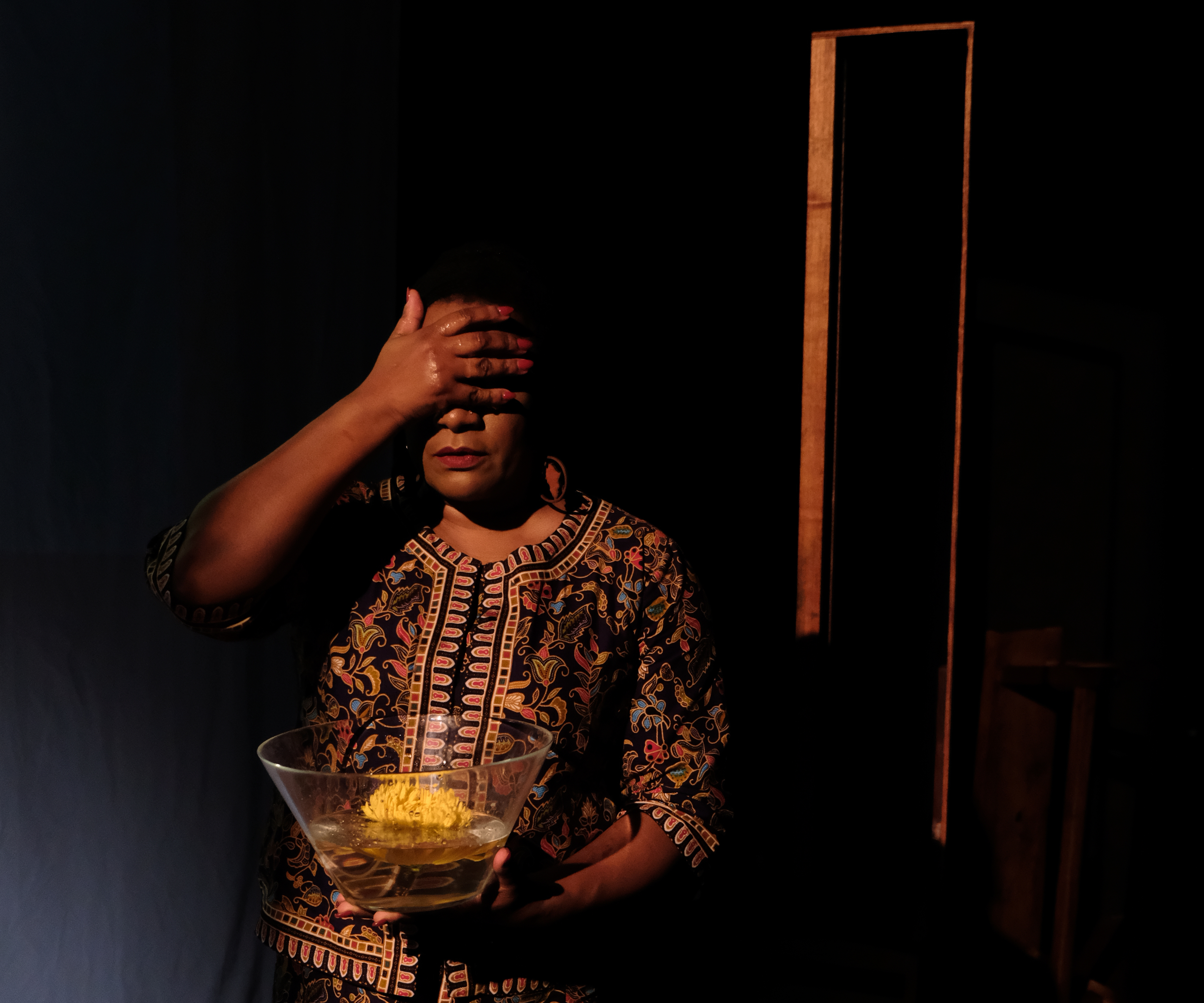 Utilizing the motif of water, the idea of crossing oceans and channels to reach greener pastures appears as a recurring idea throughout Ayer Hitam, with an overhead projector used cleverly to display the silhouette of bowls filled with water. Water becomes a symbol of states of transition, as black history ebbs and flows while time goes by, black lives and black bodies adapting to each new land they find themselves in, growing from strength to strength, suffering to triumph. Water, in Ayer Hitam, is also a source of cleansing and renewal, as at one point, director Irfan Kasban recites a prayer from the Koran, while Sharon uses water to cleanse her face before proceeding. 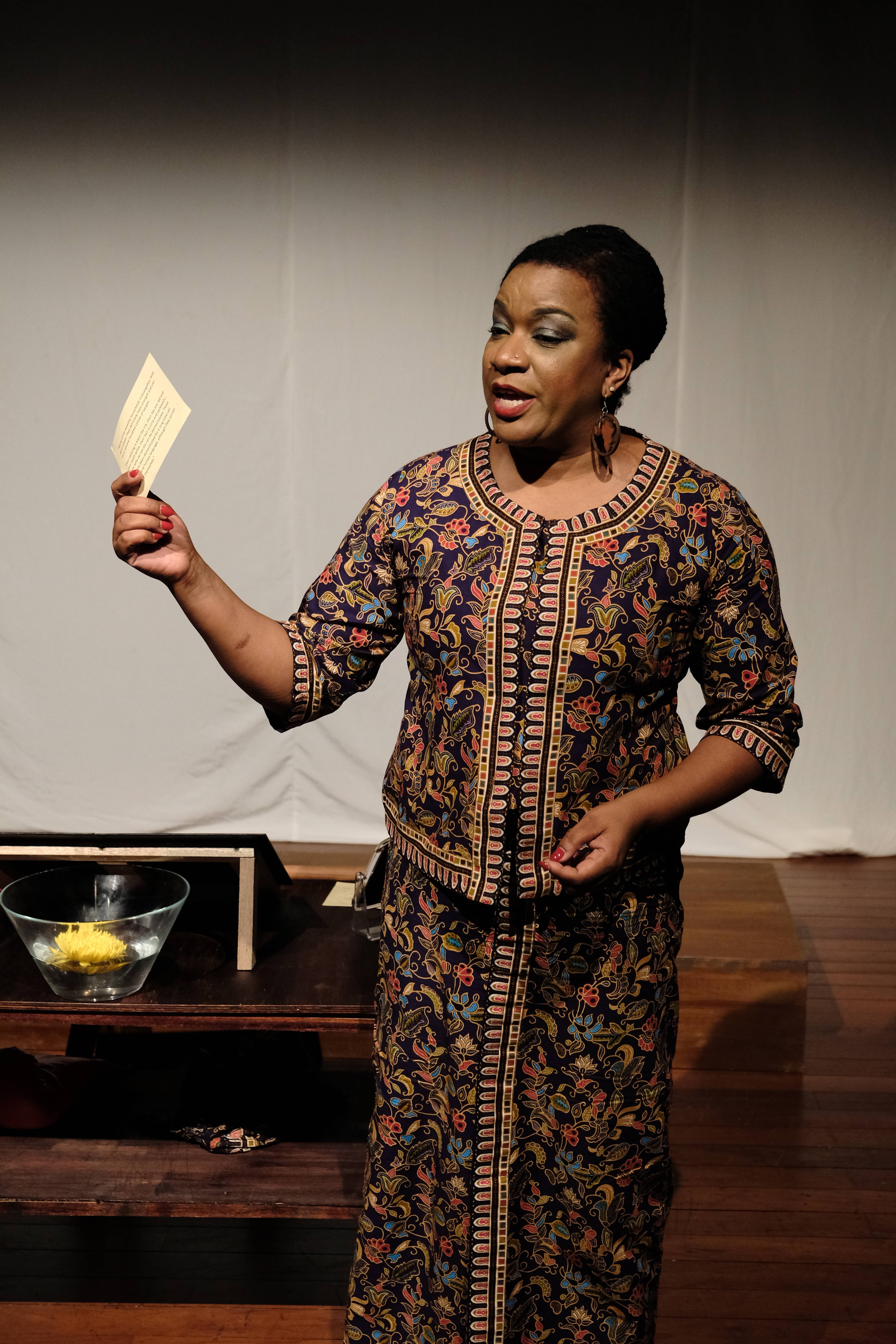 From here, Sharon begins to chart a surprisingly lengthy backstory that weaves both continents’ histories – the Suez Canal, for instance, was a construct that divided Asia and Africa, which were once connected, and ironically of course, built primarily by black slaves. Meanwhile, founder of modern Singapore Sir Stamford Raffles was known for wanting to abolish the slave trade, but his families were conversely, incredibly pro-slave. 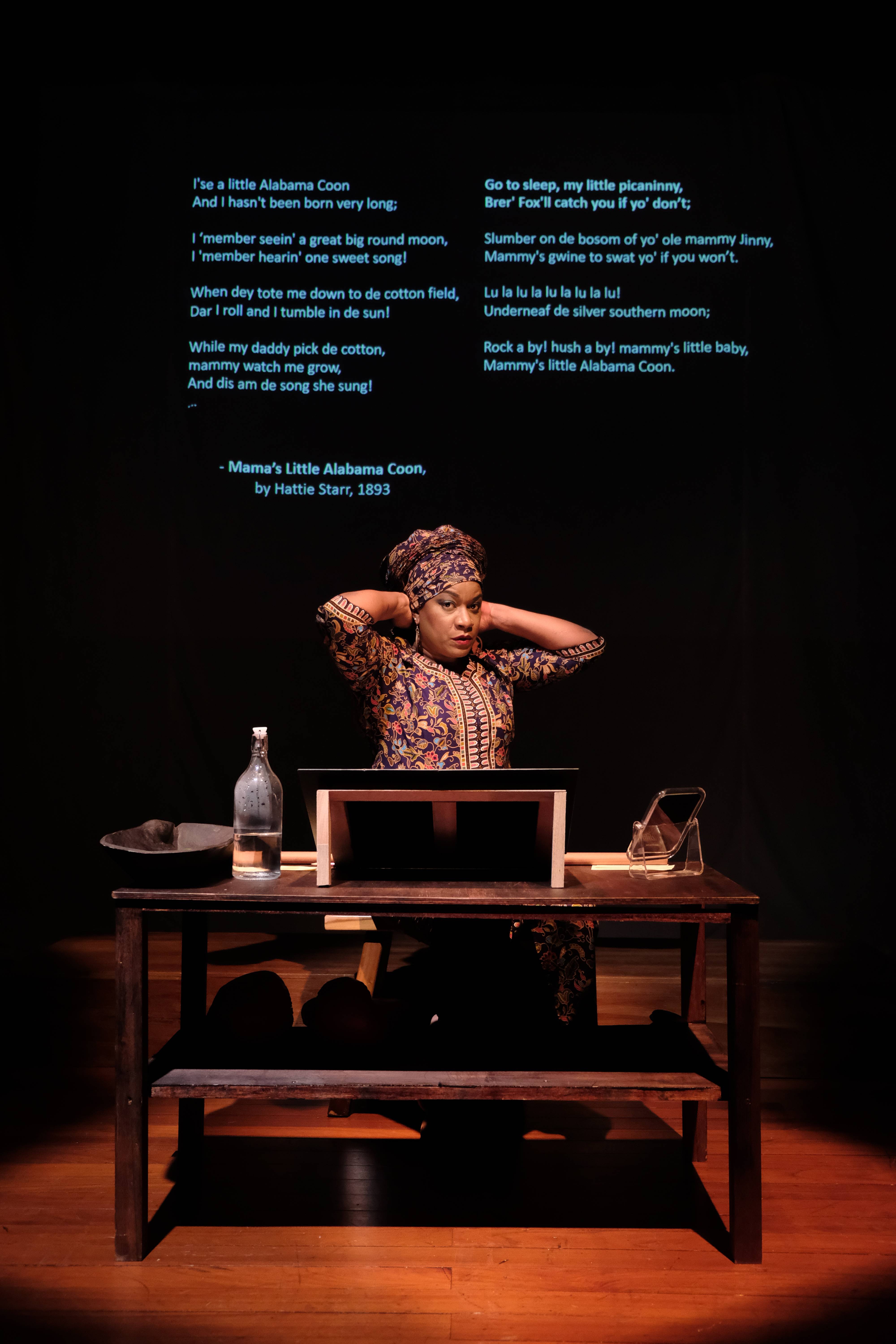 Channeling traditional African storytellers, Sharon then embodies the spirits of other Africans past, drawing audiences closer into her fold as she recounts the journey black people have embarked on as they travelled the world. She quotes from navigator George Windsor Earl, summons infuriated rage about the existence of blackface minstrel shows, traces the rise of black people upon being recognized as stars in the making in the world of boxing, or how the palm oil trade has surprising parallels and intersections in both Singapore and Africa. 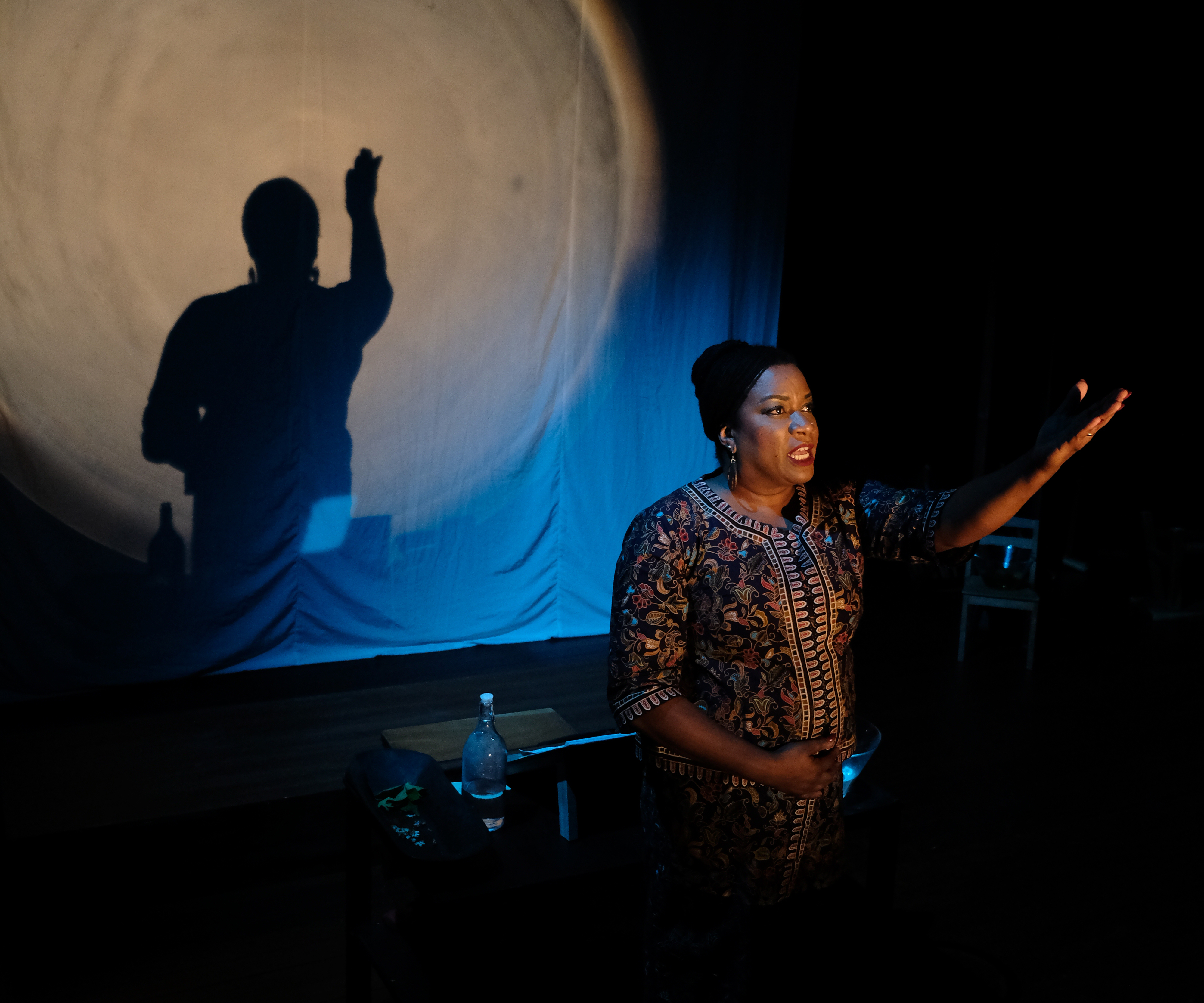 Samuel, an audience member picked by Sharon then read from the writings of W.E.B. Du Bois, Sharon moves into the modern era, continuing by describing how black is all around us, including how black influences (and appropriation) appear in music and dance, such as influences on voguing, Michael Jackson’s iconic moonwalk or even YMCA (at which point she and Yi-Sheng indulge a little, dancing onstage and have a little fun), or the use of the quintessentially black song Mama’s Little Alabama Coon as sung by local playwright Stella Kon in an early staging of seminal monologue Emily of Emerald Hill. Meanwhile, in the sporting field, Sharon reveals how black soccer players have made it in Singapore, from the existence of an all African squad (Sporting Afrique) to players such as Agu Casmir and Itimi Dickson. On a personal note, Sharon shares about her own brethren of friends who have thrived in Singapore, from comic artist Jerry Hinds to scientist/fashion designer Ifeoma Ubby, to even actor Ebi Shankara, who hails from a mixed African/Indian parentage. 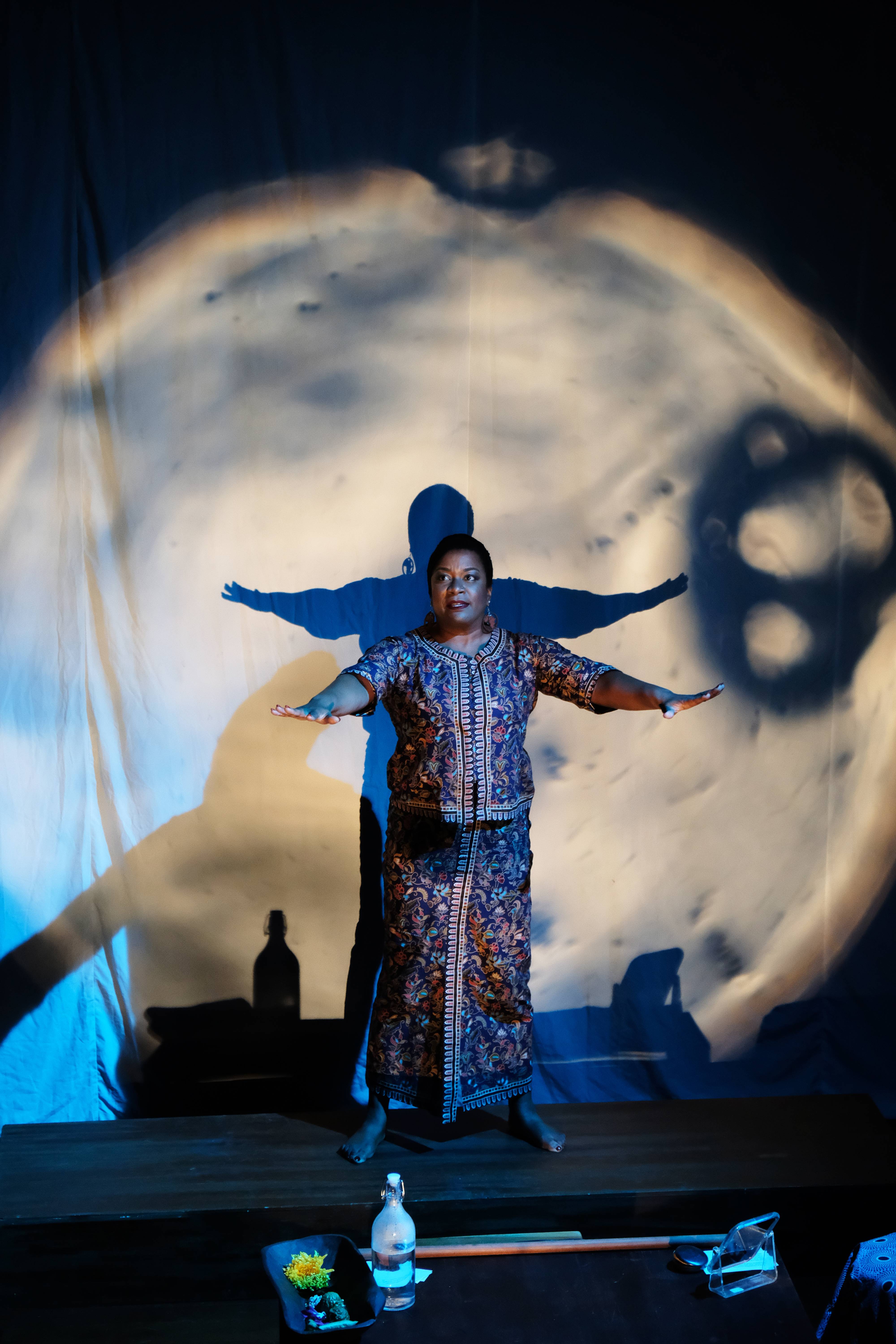 Ending with a photo montage of Sharon’s life, it becomes clear that Ayer Hitam, in a way, is her own way of documenting her love for Singapore, for recognizing how much history exists between her adopted home and her ancestors’ continent, and how it can only continue to grow in the years to come. An enlightening history lesson brought to life by a personality who well and truly respects the subject matter and infuses it with her own performative power, Ayer Hitam manages to end on an emotive note as Sharon looks out into the distance and asks “as I gaze at the water, do I sink?” As the sound of pouring water is heard once more, we are left to wonder how many more bodies there are still to cross these straits and make history in the future. 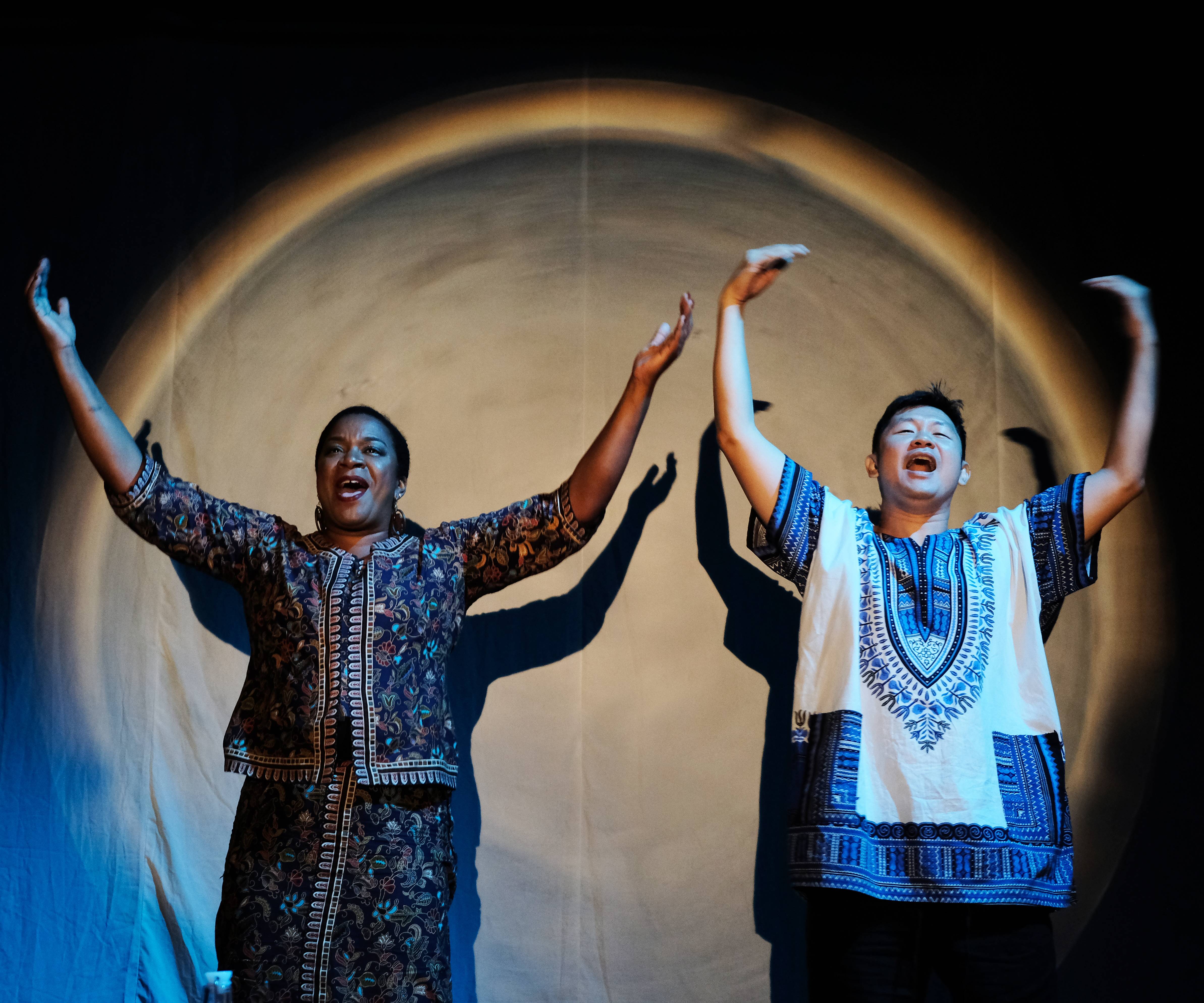 Ayer Hitam: A Black History of Singapore plays from 17th to 20th January 2019 at the Centre 42 Black Box. Tickets are sold out, but you can visit the M1SFF Marketplace for returns.