Held as part of ARTWALK Little India 2019, in a small brick and mortar gallery housed  between Rowell Road and Desker Road, master storyteller Kamini Ramachandran returned for her fourth time performing at the festival to regale audiences with her tales of the past and the epic.

Gathered around her as she knelt beside an altar-like carpet filled with paraphernalia, Kamini began by recalling the history of the twin roads that flanked the gallery, speaking of their former reputation abound with all sorts of people and characters. In particular, she highlighted the women, constantly lonely and seeking companionship, bearing flowers in their hair while smelling distinctly of jasmine oil, and interestingly, how gender itself came to become fluid within these streets. 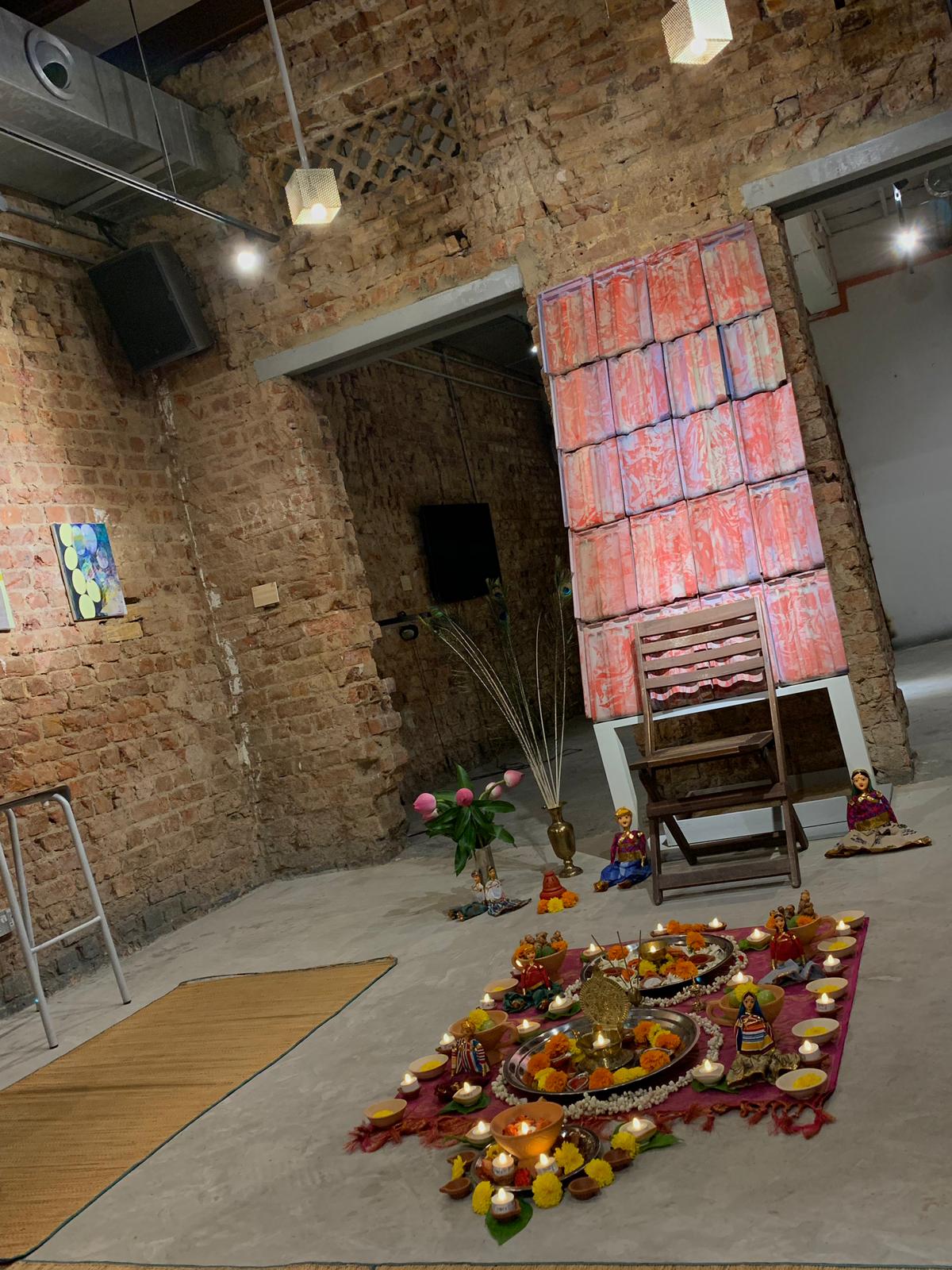 It is from here that the fragrances she describes evokes her memory of a story from the Mahabharata, the classic tale of Amba. Known for being a woman with a mind of her own, Amba is snatched from her true love by the warrior Bhishma, and forced into marriage with half-brother Vichitravirya. But with a series of clever negotiations, she escapes the marriage to return home, only to find that Salwa, her betrothed, rejects her on account of having already been touched. No longer will Vichitravirya take her either, and caught in limbo, Amba prays to Shiva to give her the strength to exact revenge against Bhishma. 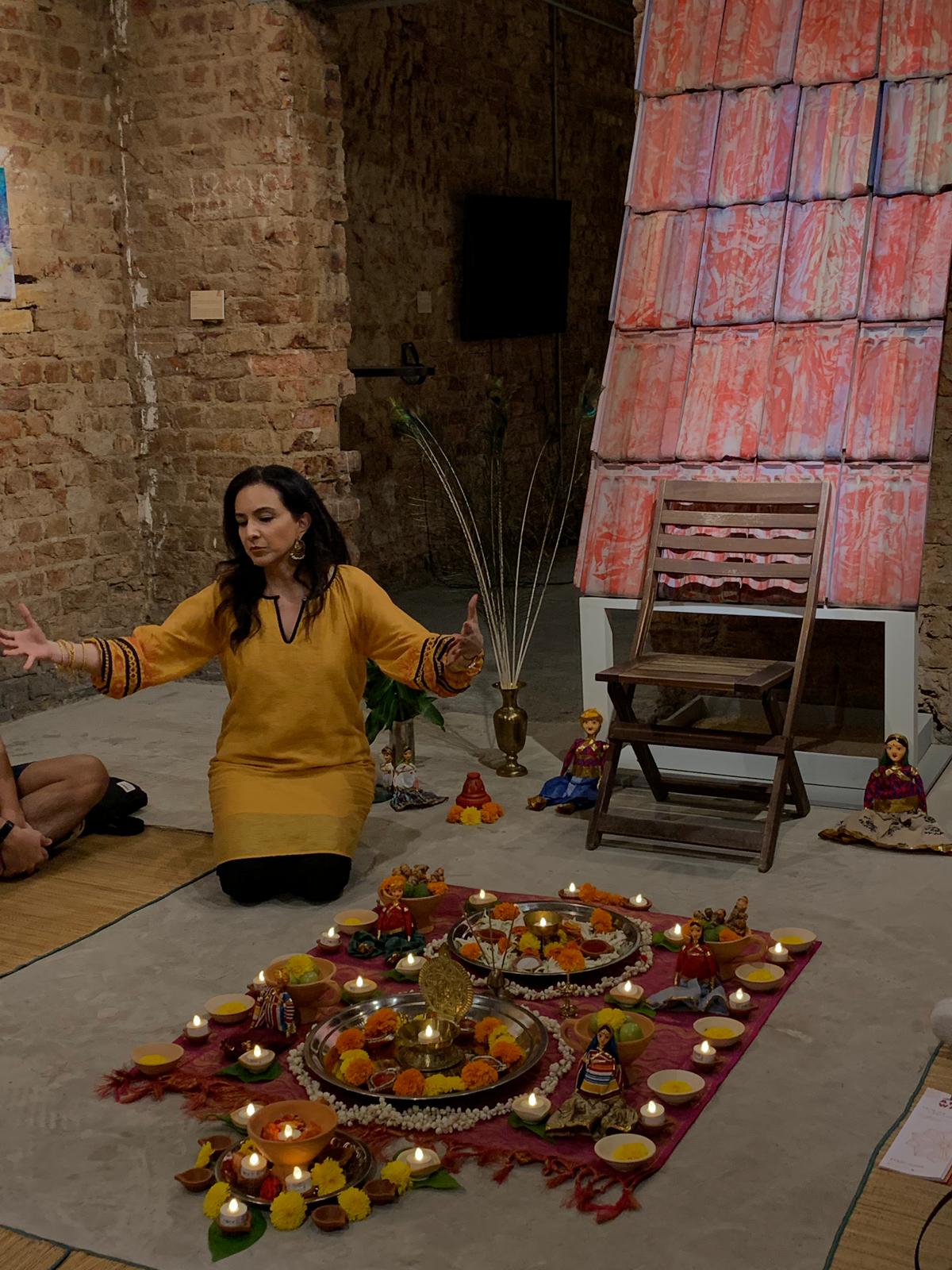 Yet, under Kamini’s guidance, the tale finds itself concerned not with the violence, but with the tale’s sexuality. Amba is reborn as Shikhandi to King Drupada, who raises the physically female hero as a male. It is at this point that Kamini deviates from the thrust towards the final battle, instead leading us to a side story where Shikhandi marries a woman, and upon their wedding night, discovers the impossibility of having heteronormative sex. With a chance encounter with the demon Yaksha, Shikhandi transitions from physical female to male, and they become a symbol for gender fluidity as a whole. When we finally reach the epic final battle, Bhishma’s weakness is revealed – he cannot lay hands on a woman, and Shikhandi, bearer of both genders, emerges victorious.

The tale of Amba is thus elevated and given new life in Kamini’s hands, and one cannot help but see this story with new eyes as Amba becomes a champion not just for women, but a champion for the non-binary, confidently living life as fluid in both gender and sex. Never one to shy away from these darker, more adult-oriented tales, there’s something magical about the way Kamini tells her stories, and she’s not considered one of Singapore’s most mesmerising storytellers for nothing. She shifts seamlessly from one character to another, keeping us rapt with attention as we hold on to every word, desperate to hear what comes next while savouring every sentence. 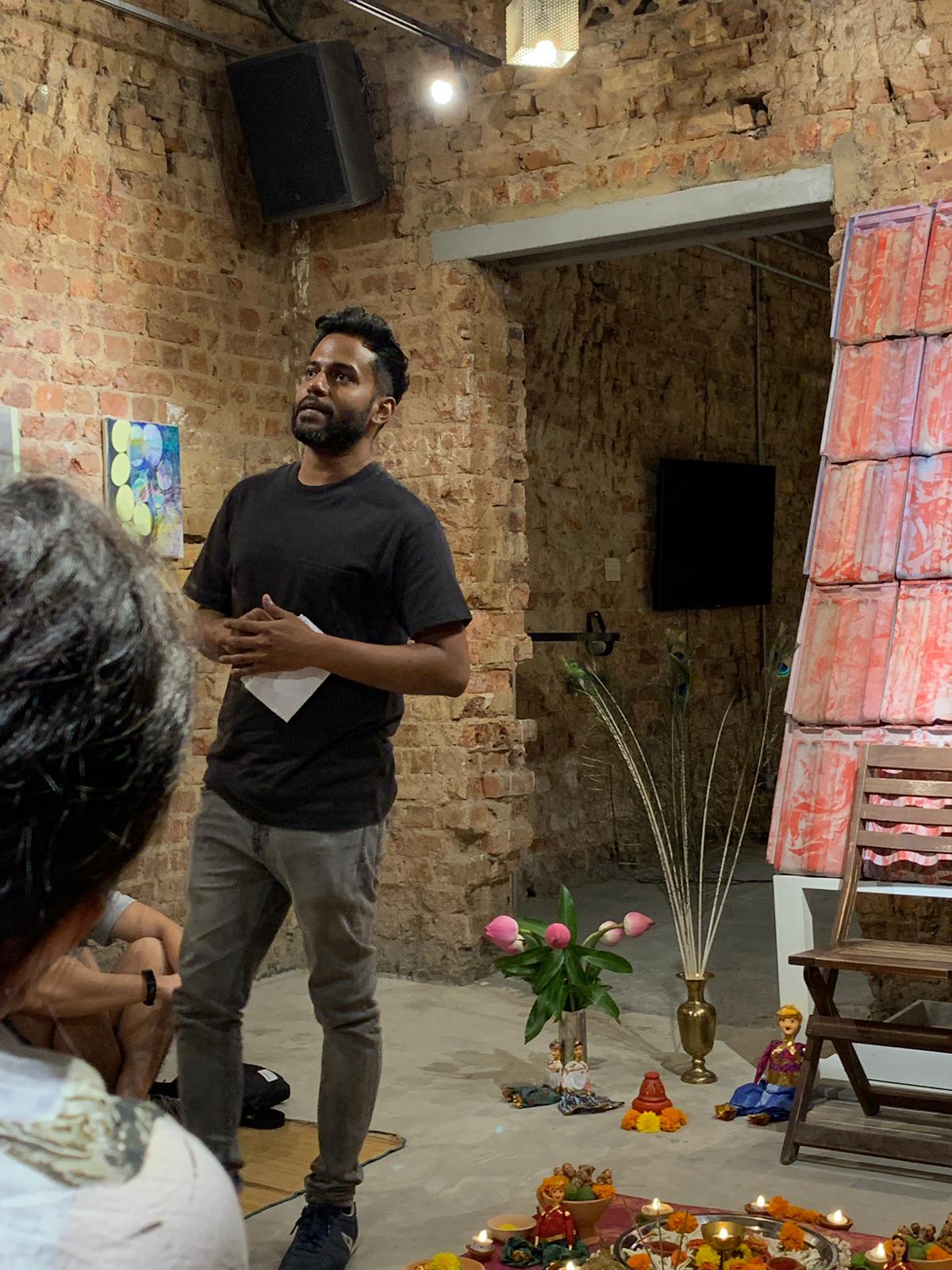 What follows from here is more tales still, this time from Shivram Gopinath, a poet by trade. Going on the hypothetical thought of ‘What if Shakespeare were Indian’, Shivram weaves a tale of two demon brothers from Mumbai as they wreak havoc and gruesomely, eat unfortunate victims from the inside out, showcasing his wealth of talent and creativity to bring a different perspective to poetry and stories. In addition, Shivram also recites a ‘poetic Yelp review’ about his favourite Andhra restaurant at Serangoon Road, bringing to life the smell of coconut oil, ingredients of ghee, okra, tomatoes, lentils, and even the rarely seen rasam through his words alone, showcasing both his sense of humour and gift of writing. By its end, hearing him, one feels as if one has consumed a good meal ourselves, or at the very least, are hungry for precisely the food he’s just described (convenient, since we are in Little India). 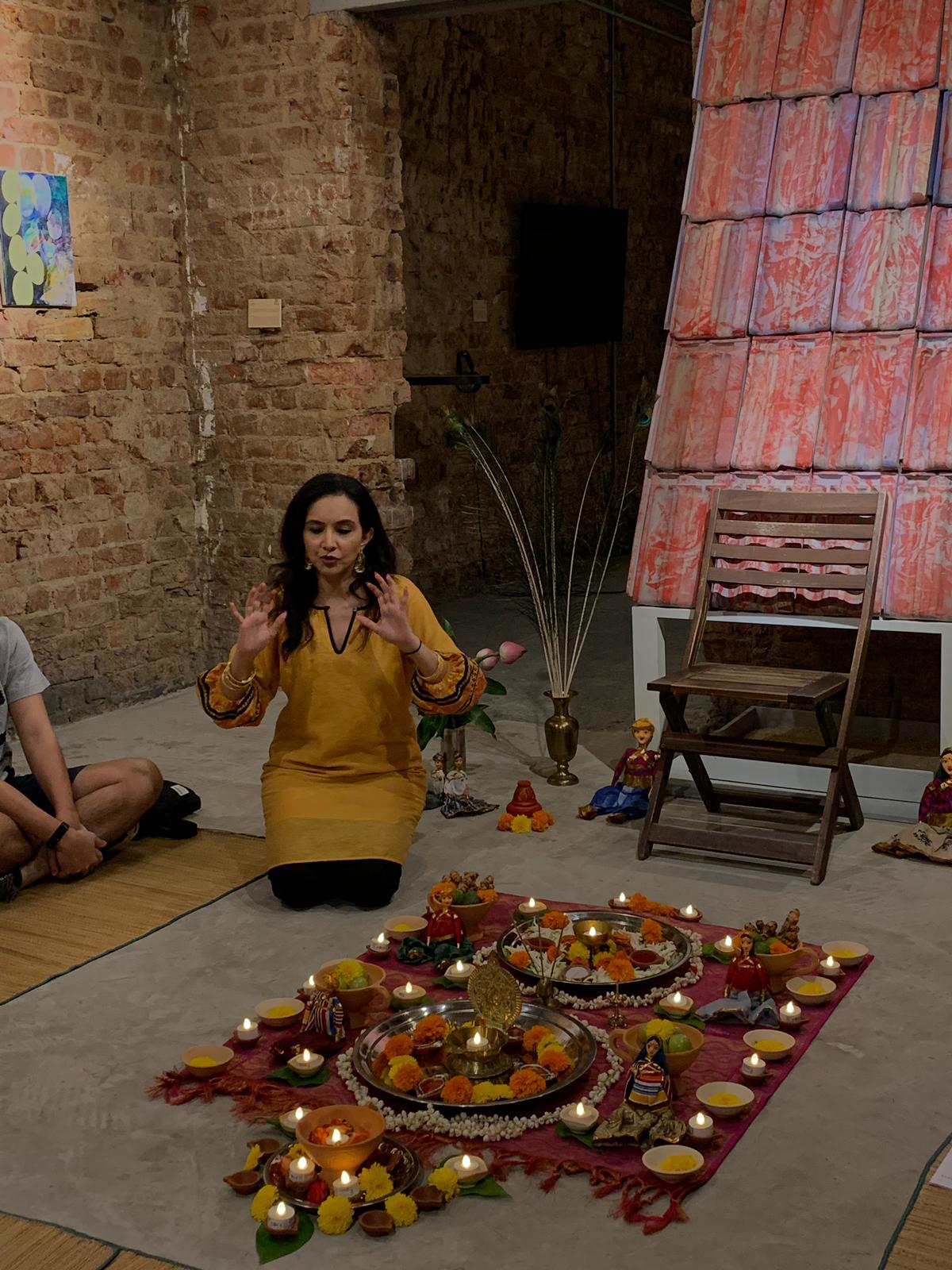 As Kamini returns, she presents perhaps one of the most important elements of the entire session, a form of cultural exchange as she explains her setup and the symbolism behind it, bringing the evening to a conclusion. One sees the peacock feathers, the garlands of red roses and jasmine flowers, the raw turmeric Indians use as a form of medicine, giant limes often used for rituals of good luck and to burn to chase away negative energy. We hear about the marigolds, prayer flowers and tiny Indian roses, dwarfed by the lack of rain in India, the amla fruit (or Indian gooseberry) as an antioxidant used in rituals. We are introduced to the rare betel leaves, not often sold for fear of seeing our walls painted red with spit, before Kamini tells us about the holy ash Vibhuti in clay lamps, and the Sindoor red powder. Finally, she shows us her own personal Kathputli puppets, their presence granting her a vessel with which to  manifest her characters and stories around.

We end the night feeling completely satisfied, drunk on tales both ancient and modern and armed with new knowledge of Indian culture and mythology. If anything, Flowers of the Night has left us with the faint scent of memories past, one that has been brought out by the power of the oral tradition and its practitioners, an art form that once again we’re convinced, remains one of the most esoteric, engaging and enchanting types of performance ever.

0 comments on “Review: Flowers of the Night by Kamini Ramachandran (ARTWALK Little India 2019)”