This year, FOST Gallery starts off 2019 with a brand new exhibition. At In Random Order, works by artists Kray Chen, Heman Chong, Grace Tan and Syagini Ratna Wulan are set to be featured, unified by functioning within a structure, physical or conceptual, in turn determined by a set of rules and a unified composite of interrelated and independent (possibly infinite) modular parts.

Yet each individual artist has found ways to re-delineate both spatial and temporal boundaries, circumventing or subverting the set order, either in response to the immediate environment or by simple prerogative as its creator. This sense of unpredictability and chance elevates what might have been a static, passive system to an energetic, dynamic one. Order is only evident when there is an obvious pattern or sequence.

For both Grace Tan and Syagini Ratna Wulan, their work responds to the spatial constraints of the gallery architecture with their respective works. n. 358 – variable equilibrium, a row of I-Beams, shrouded with long strands of black thread; and Aether Array, a multi-panelled work with a pre-determined gradation of colour, created respectively by Grace and Syagini, were born of a decision as to when to cease the multiplicity while showing enough components to evidence the order.

The fragility and temporality of orders, in art as in politics, no matter how well established, are exemplified in several artworks. The conical sandpile in Tan’s n. 357 – critical point in its positive and negative forms reveals a precarious state where the slip faces of both the pigment pile and pit are on the verge of collapse. Both models demonstrate the concept of self-organised criticality, where physical systems spontaneously bring themselves towards these acute points. Similarly in n. 358 – variable equilibrium, the positions of the loose strands of thread are altered by external factors in the immediate environment. 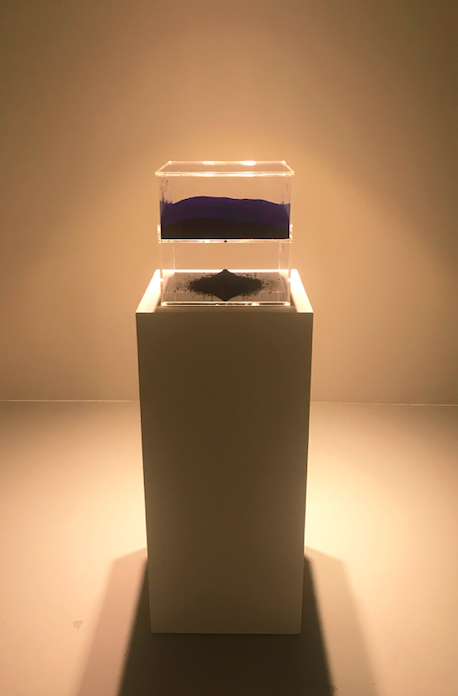 Wulan’s chimera, a sculpture, which constituents are bespoke interlocking polystyrene components was built to a point where another component added might have undermined its physical stability and visual balance. In Heman Chong’s Foreign Affairs #69, repeated banal images of an unnamed embassy back entrance hint of the shifting-sands of power systems in politics and diplomacy, upending old world orders.

In certain instances, the subversion of a system in the artwork may not be due to external factors, but by the artist himself or herself. The book titles in Chong’s on-going Cover (Versions) series of paintings are taken from a reading list of fictional books. However he has since added selected plays and poetry, as part of his on-going research for his own novel, with The Tempest / William Shakespeare and One Fierce Hour / Alfian Sa’at being two such examples. Likewise, the layers of paint built up over his large scale painting The toothache that passes through this narrative has given me a sharp twinge right in the mouth. I break out into a strident, high-pitched, syncopated melody. It is the sound of my own pain, of someone who carries this world where there is so little happiness. Happiness? I have never come across a more foolish word, invented by all those unfortunate girls from north-eastern Brazil. that passes through this narrative both reveal and obscure the underlying gridlike structure. 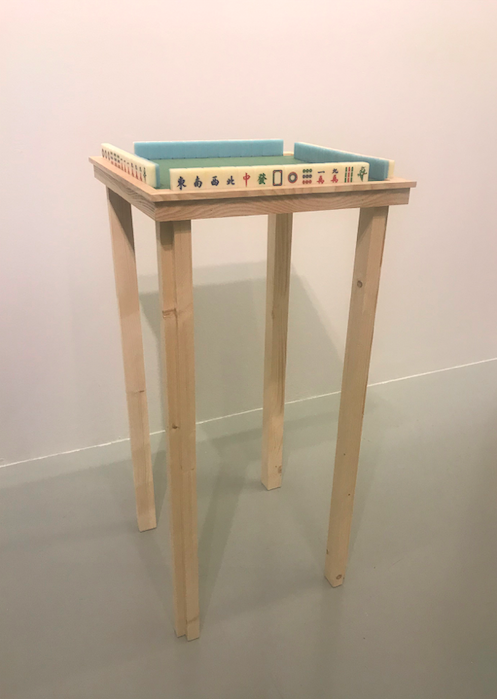 Kray Chen’s Waiting for the Bird #2

The inclusion of Kray Chen’s series Waiting for the Bird provides a counterpoint to the randomness of order. It reference the four-player Chinese tile game of mahjong, which involves a skill, strategy and chance. The four highest-scoring hands have resulted in a deadlock, with the unseen players waiting for the same winning card, and seemingly having abandoned the game. At times, randomness within a complex set of rules does produce finite outcomes.

Come explore the concept and nature of order and chaos as demonstrated by these four artists at the FOST Gallery, and expand your mind by seeing past the surface and discovering the rules or lack thereof that determine our world.