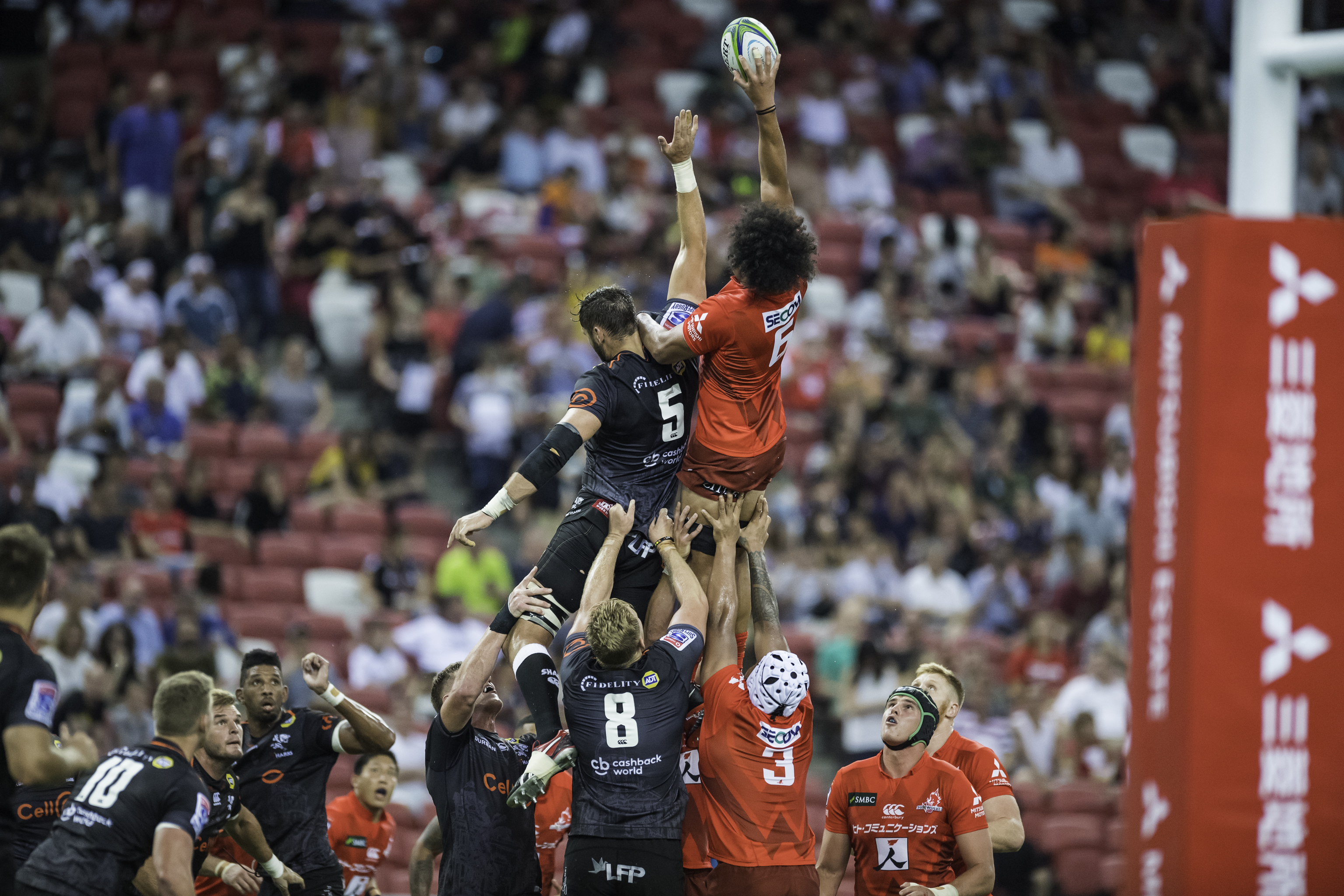 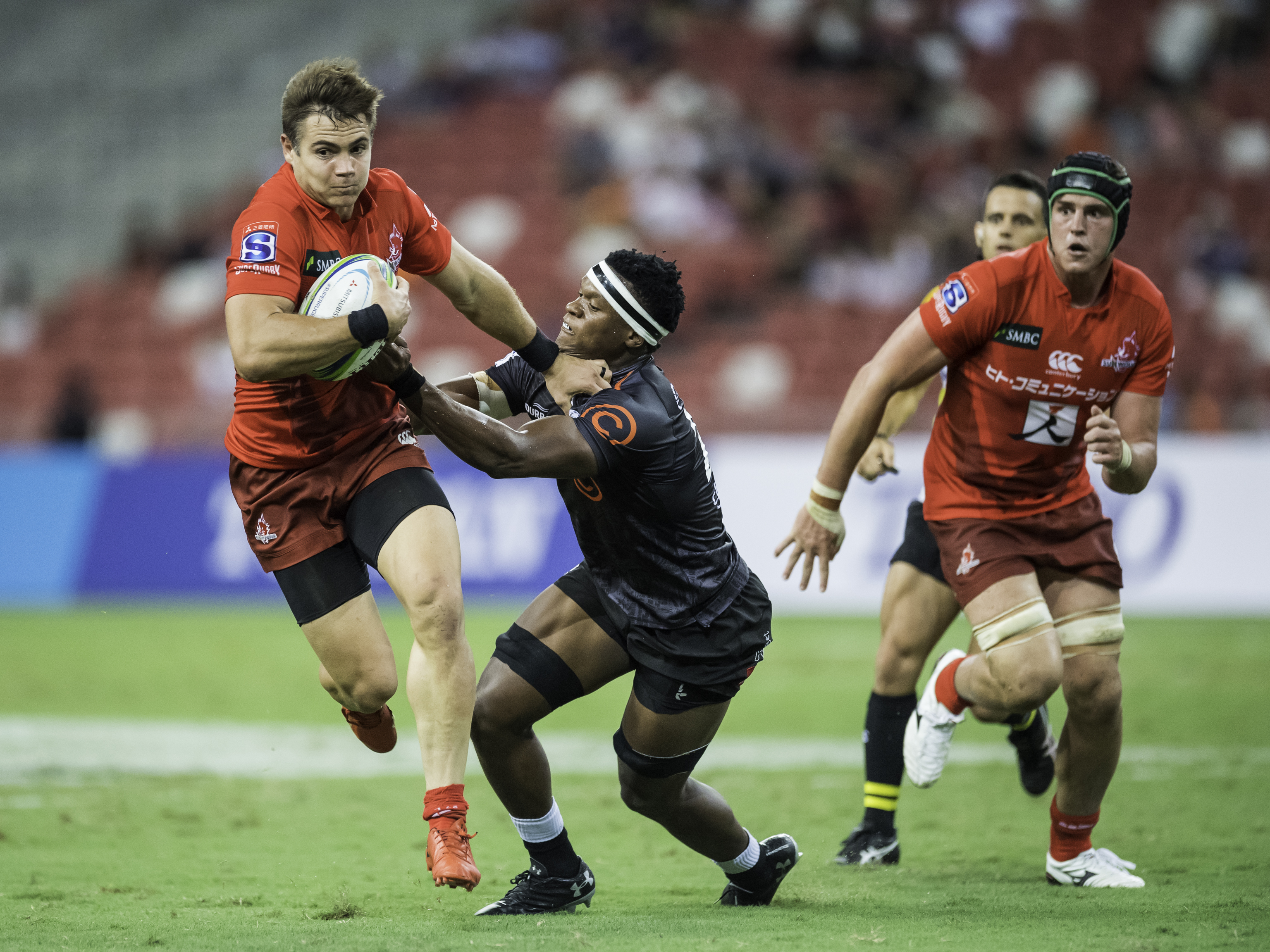 The Sunwolves kicked off the first half, only to lose the opening advantage to the Sharks with a penalty in the 4th minute for offside, with flyhalf Robert du Preez putting the Sharks in the lead 3-0. 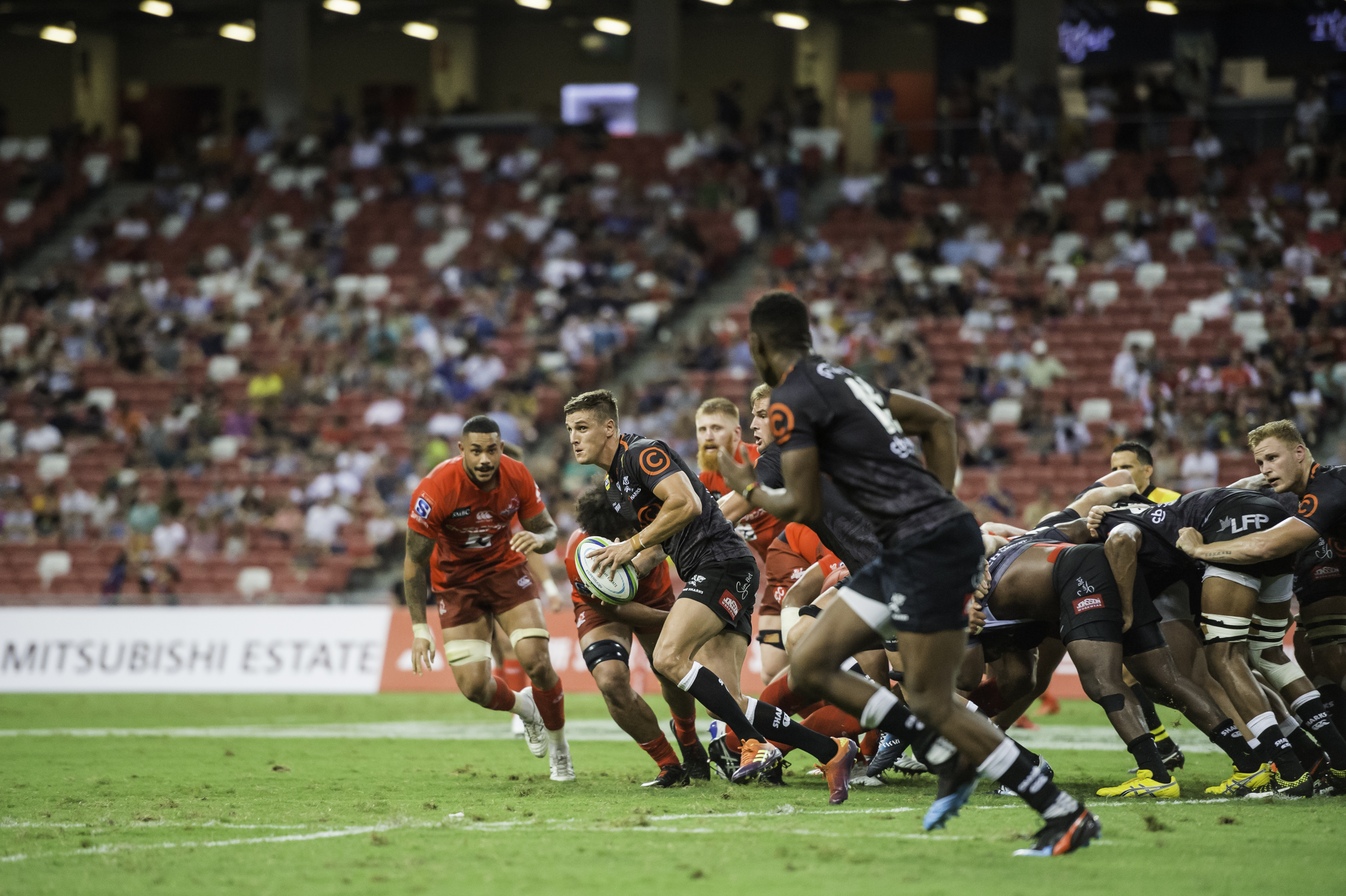 With the home advantage and the crowd behind the team, the Sunwolves weren’t deterred by the early penalty, and outside centre Shane Gates ran to the line and scored the first points for the team, and with a conversion by flyhalf Hayden Parker, they took  the lead with a 7-3 advantage, later extending the lead further still with a penalty, leaving the score at 10-3. 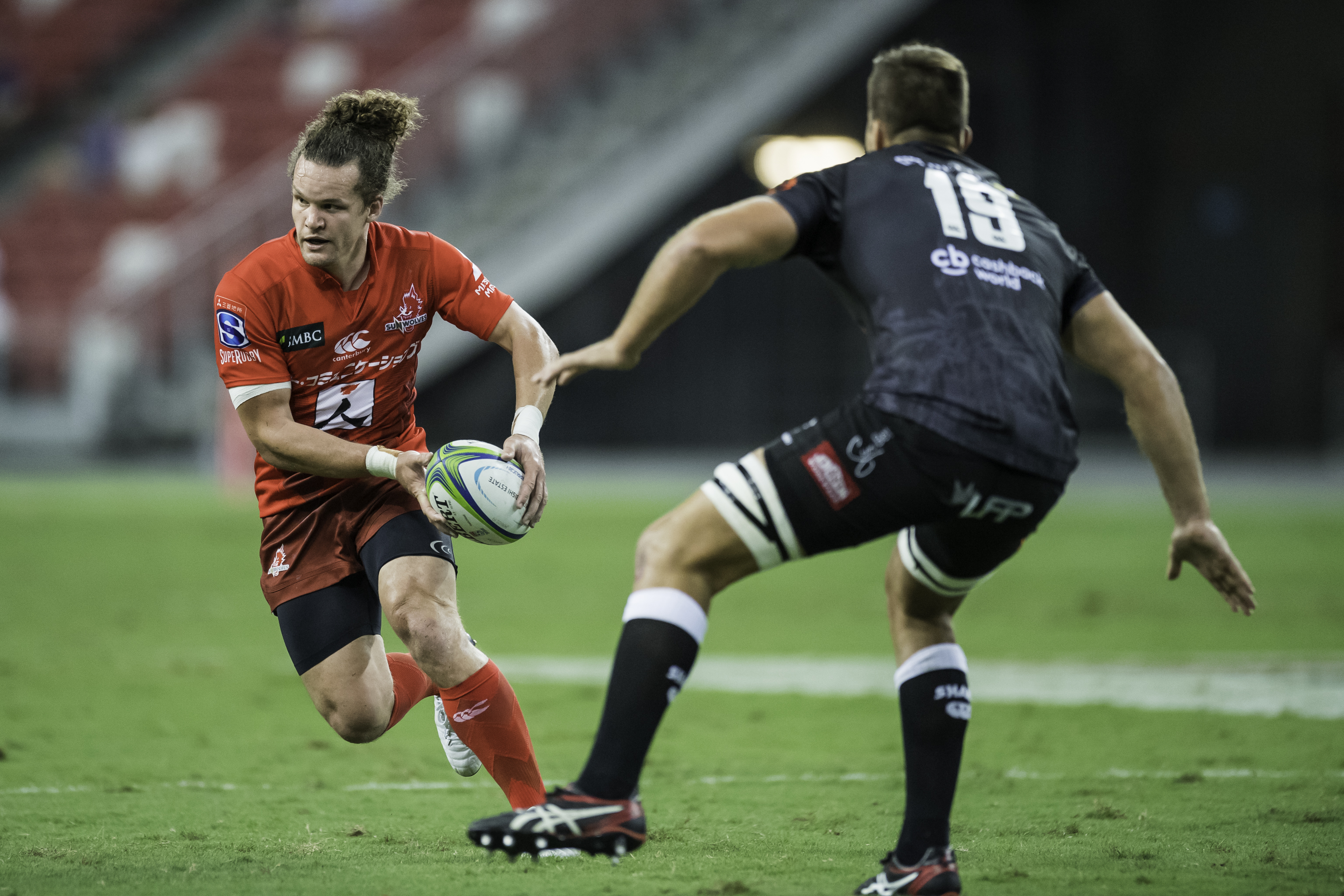 It didn’t take long for the Sharks to respond with a try themselves, levelling the score at 10-10. It was evident who was the fitter team out there, and the Sharks, with the experience from their first two matches, dominated the game from then on, as they took advantage of their momentum with a try from Daniel du Preez in the 34th minute, converted by Robert du Preez to place them in the lead at 17-10. 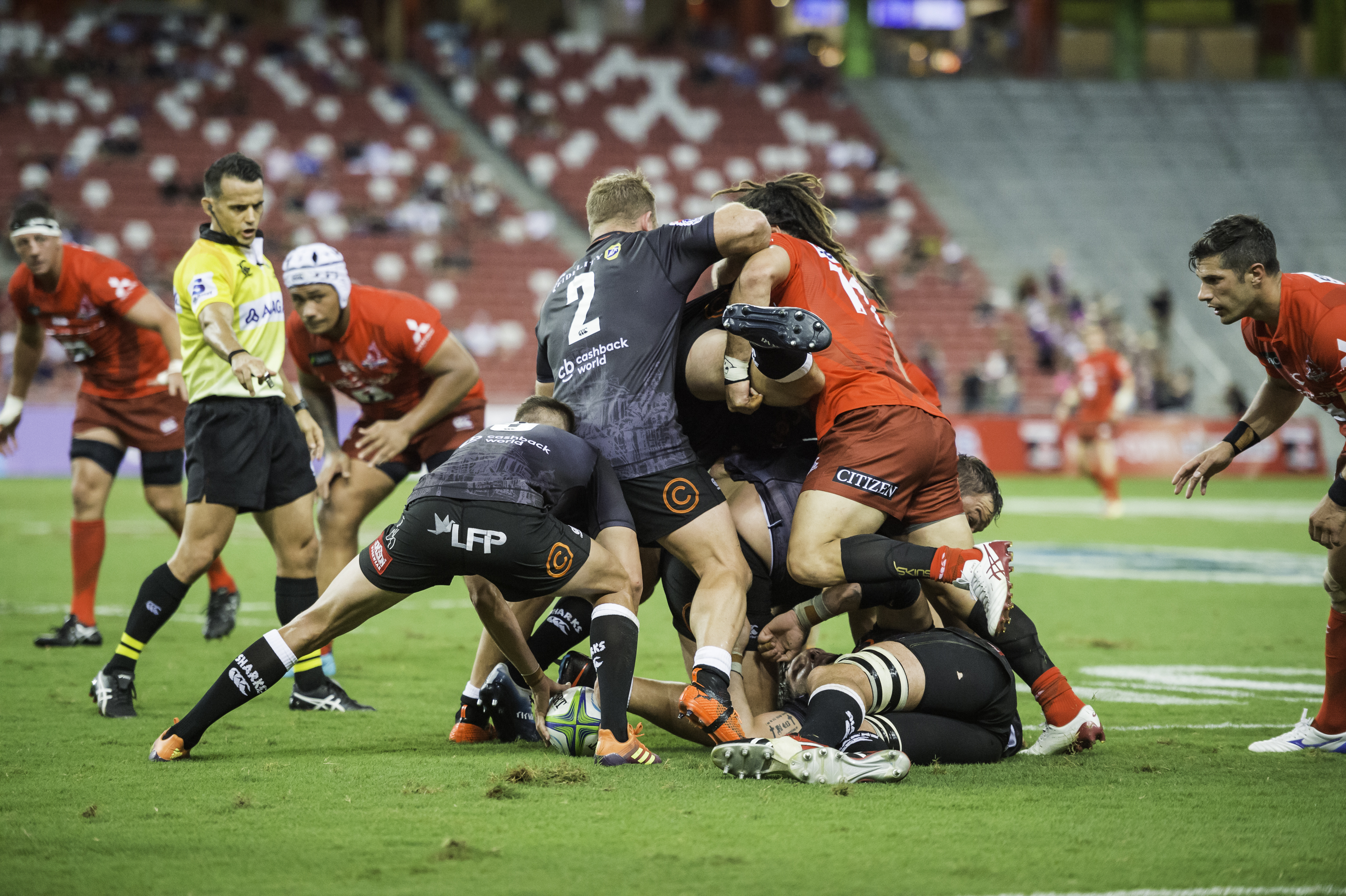 Further tries from right wing Sbu Nkosi, who showed off his strength with a flying finish to the line, as well as another conversion by Robert du Preez, continued to widen the gap in score to reach 24-10 at halftime. 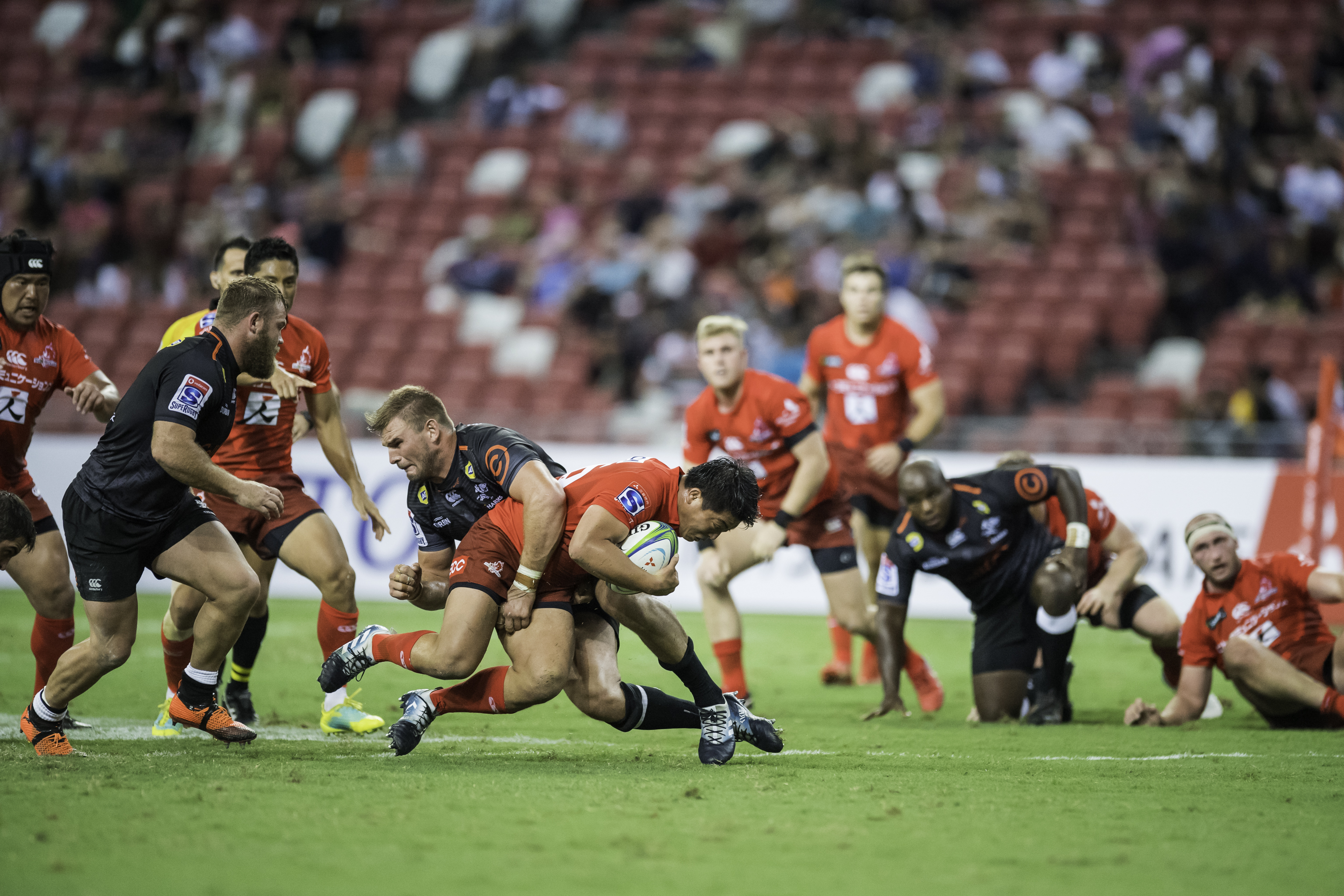 During halftime, it was evident the crowds of families (totalling 4967 in the audience) who came out in droves to support their favourite teams were filled with exhilaration, taking advantage of the break to banter with the other attendees, have some good fun, and continue to cheer on the teams during the intense match. 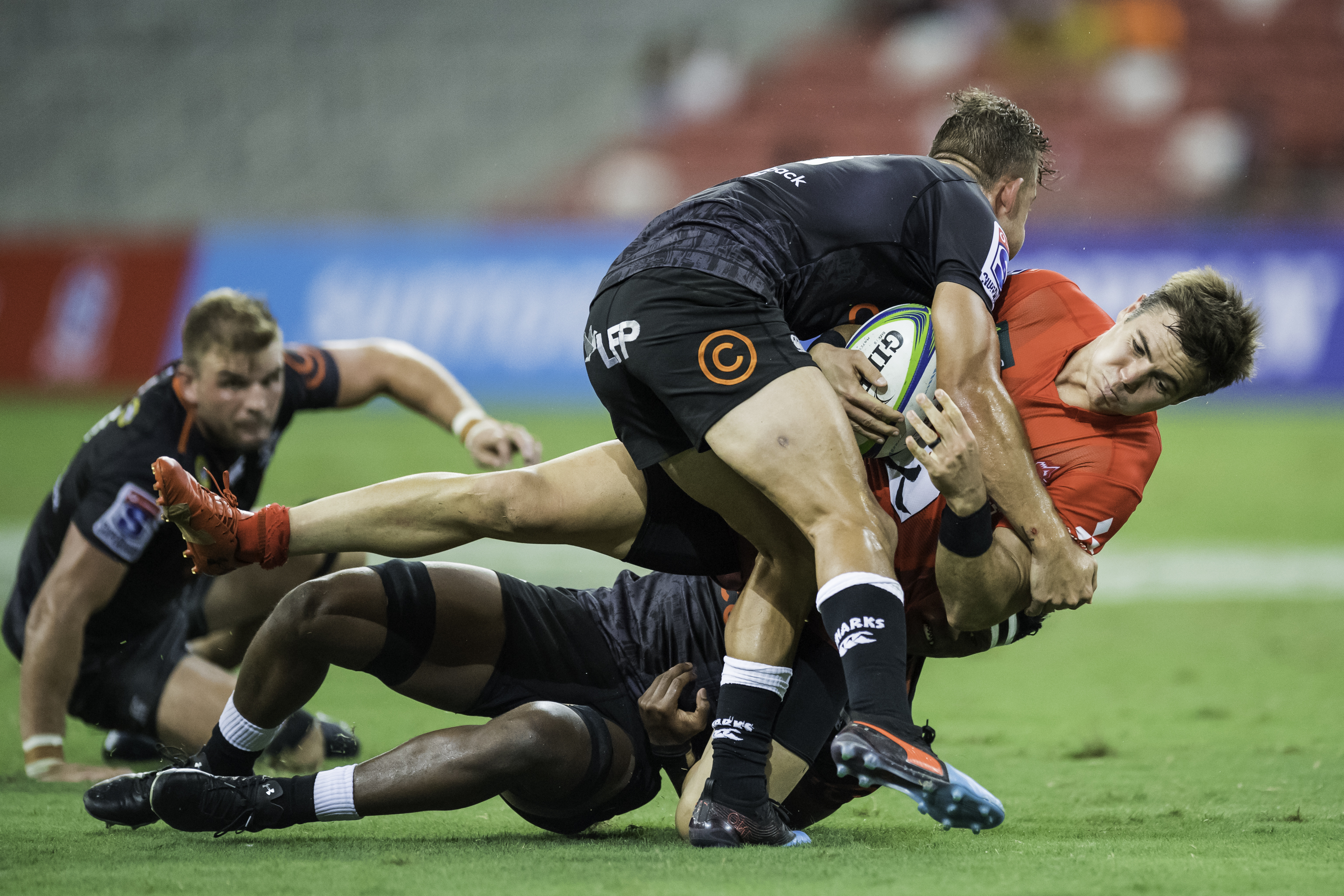 After the break, the Sunwolves started off strong, coming onto the field with much purpose. However, Sharks left wing Makazole Mapimpi took full advantage of possession to extend the Sharks’ lead to 29-10. Further tries by Sharks hooker Akker van der Merwe, and Sharks No.23 Jeremy Ward extended the score to 45-10. 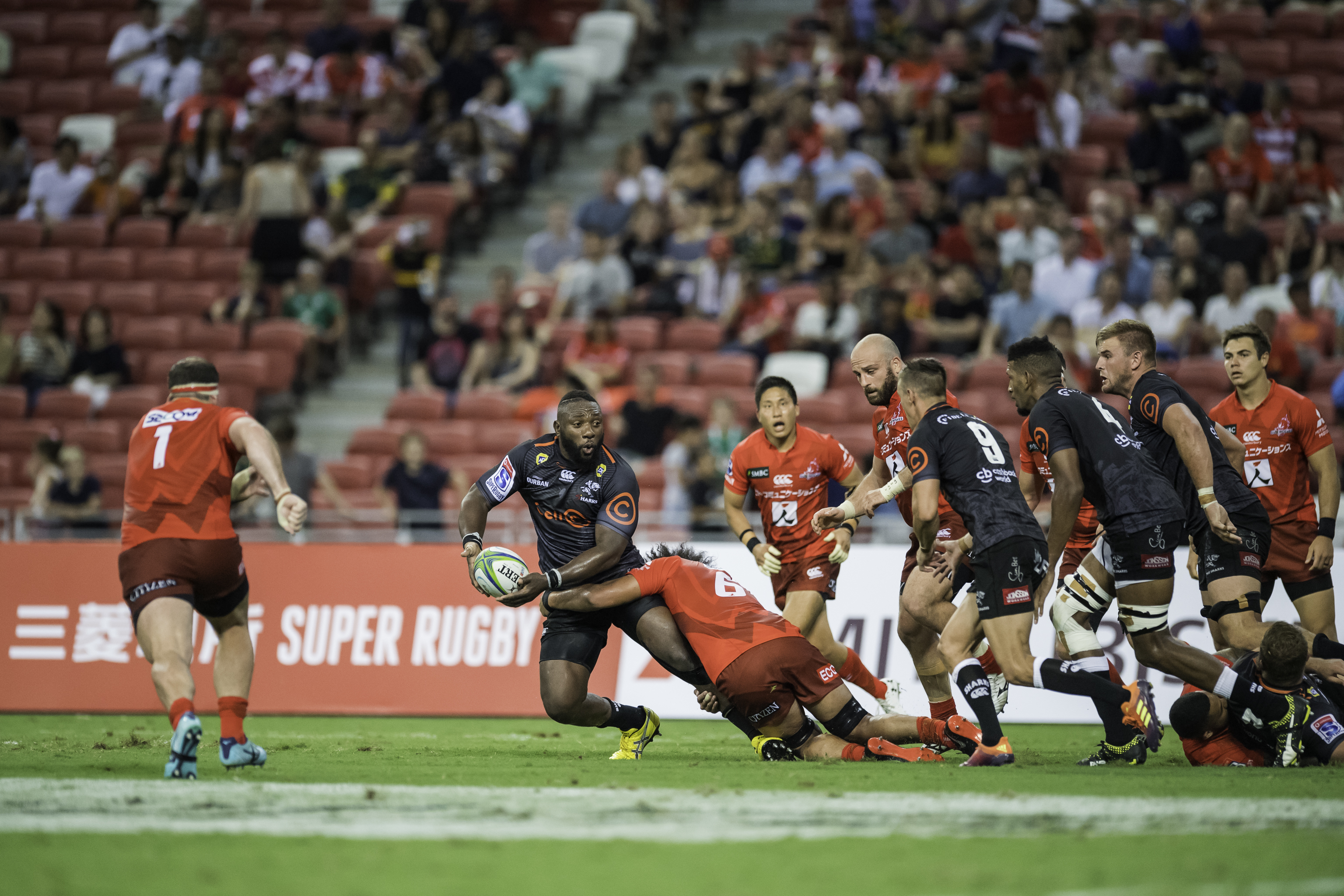 As full time beckoned, the Sunwolves had the last possession of the game, with the crowd still behind them, never for a moment stopping supporting their home team. The Sunwolves put everything they had into this last play, As the full time horn sounded, the Sunwolves certainly wore their hearts on their sleeves and did all they could, but still couldn’t find the response to the Sharks’ dominant display. 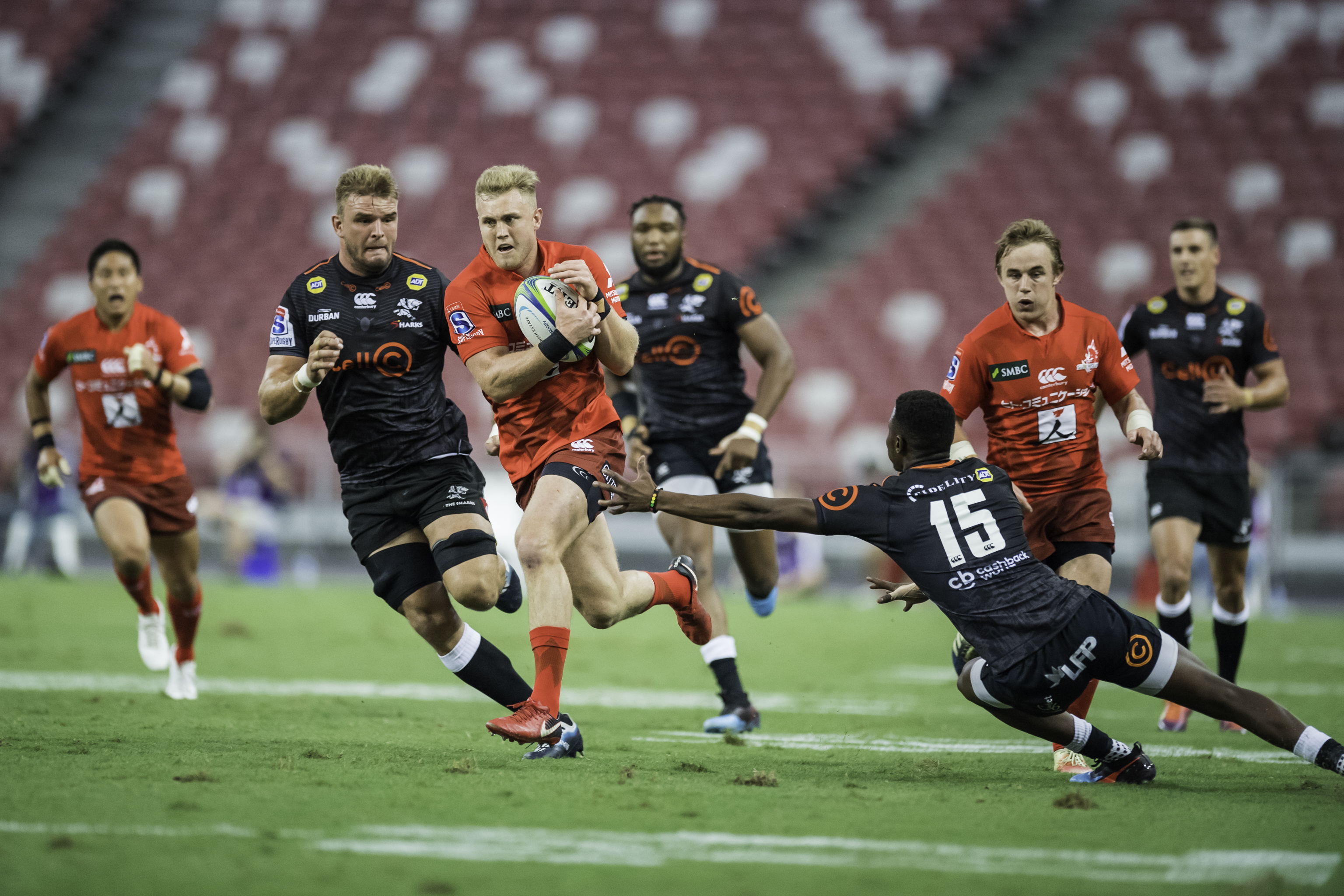 Said Sharks Head Coach Robert Du Preez at the post-match press conference: “We’re very happy. We’re always happy to be here. The boys did really well. They used the opportunities that came along. We played away in Singapore and won with 45 points, it’s really great.” 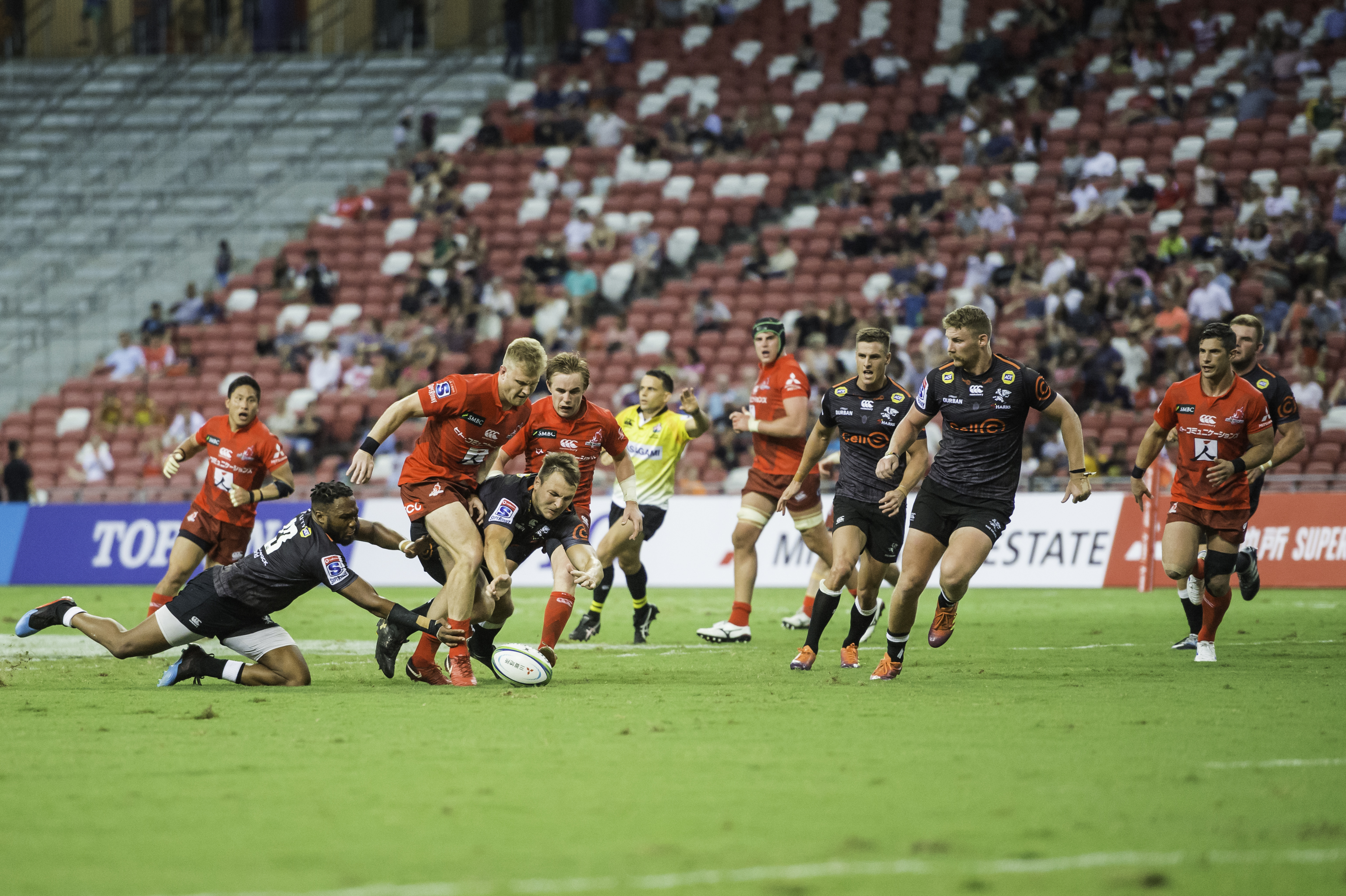 When questioned how the Sunwolves were as a team, du Preez responded: “The Sunwolves team is always a tough side, you never know quite what to expect. I’m sure they will only get better as the competition goes on. There’s quite a few of the guys that are not available at this stage, but they will be a force to be reckoned with. 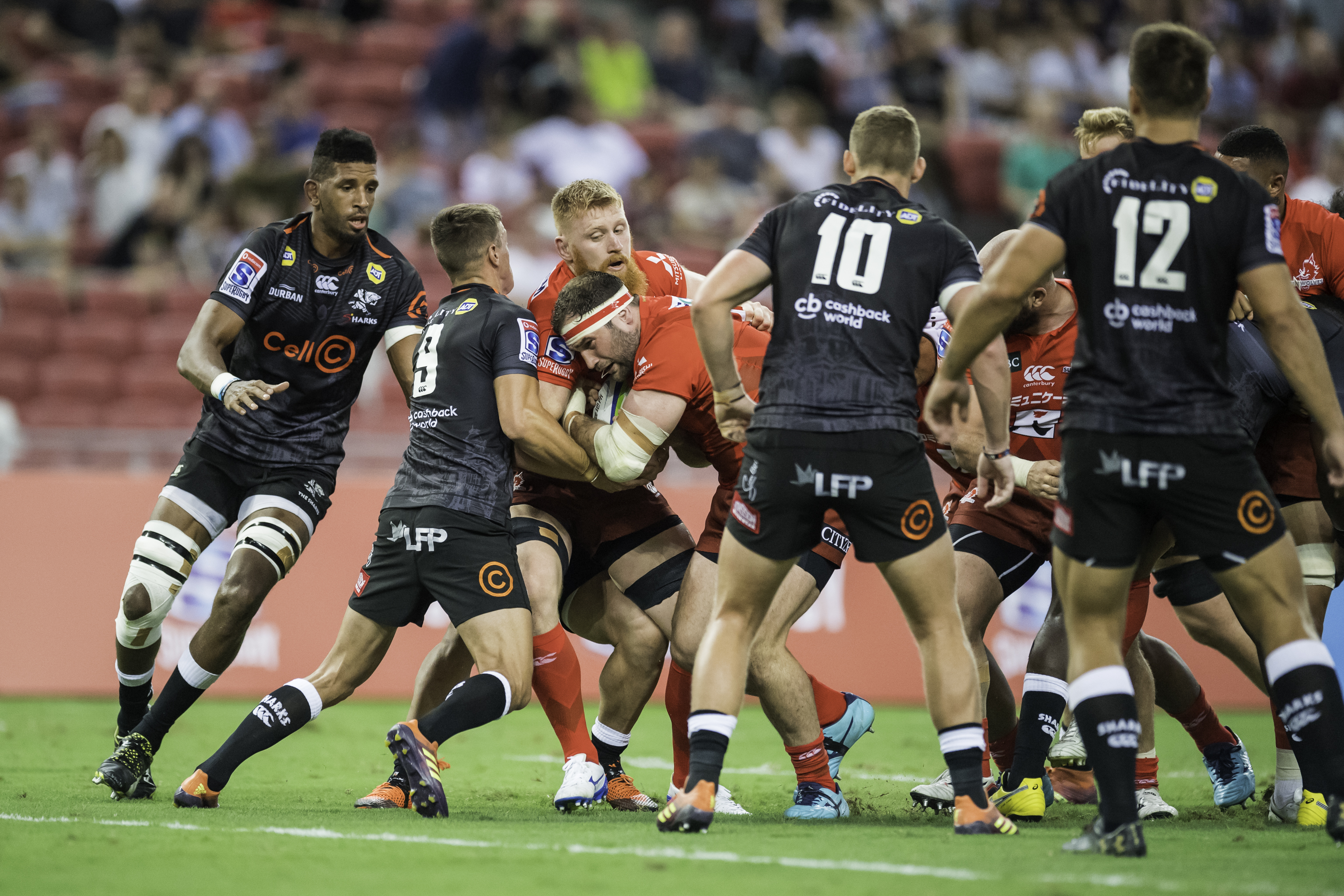 When questioned about certain plays made on the field, du Preez commented: “The captain makes his calls in the field. I thought we were dominant with our drives in the line out. We wanted to capitalize on that.” 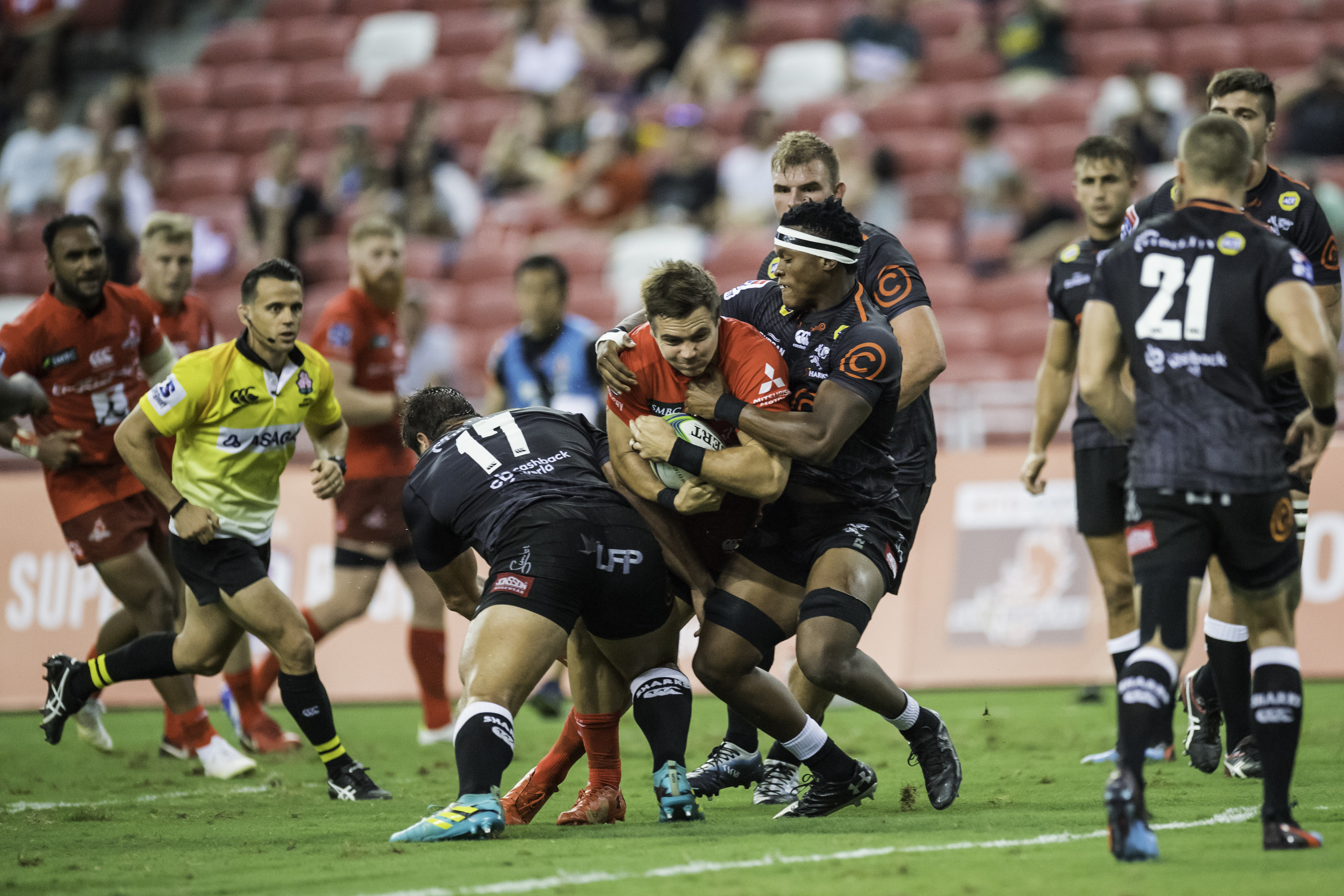 Said Sharks Captain Louis Schreuder: “For us, the last two weeks before today were tough games. We played the Lions and the Bulls. Last week especially, we played in severe heat so I think the boys and the whole squad had a good run out. I think always going into the first games, especially away, it helps. I think that was very pleasing.” 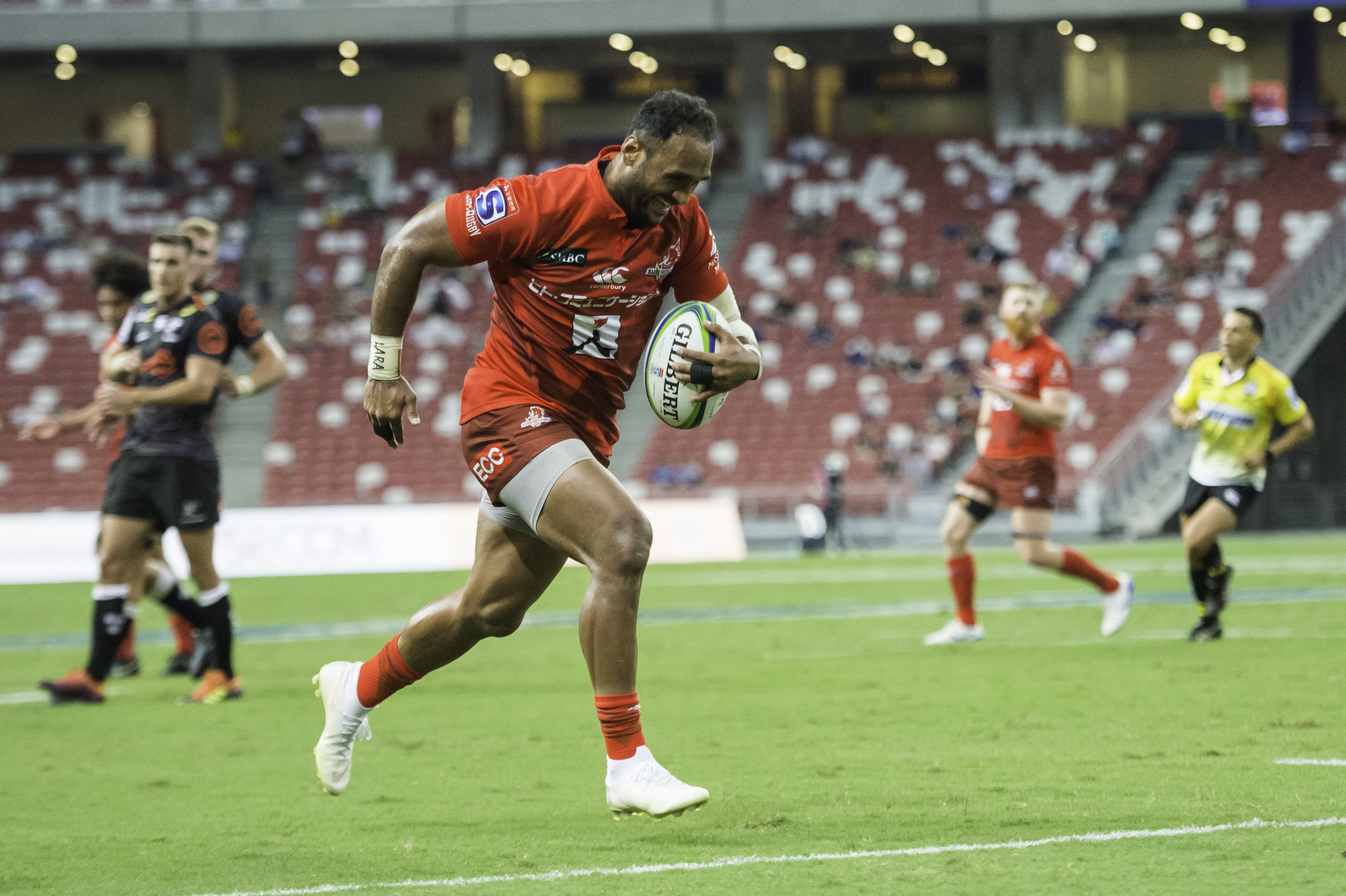 Said Sunwolves acting head coach Scott Hansen: “If we’re to break the game down, as a coach I was really proud of the effort. I was proud of the boys. We’re here for each other and show a lot of care but at the end of the day we’re on a stage. If we look at the things that we can’t quite get it right, it’s because we were under pressure. We’ll grow.” 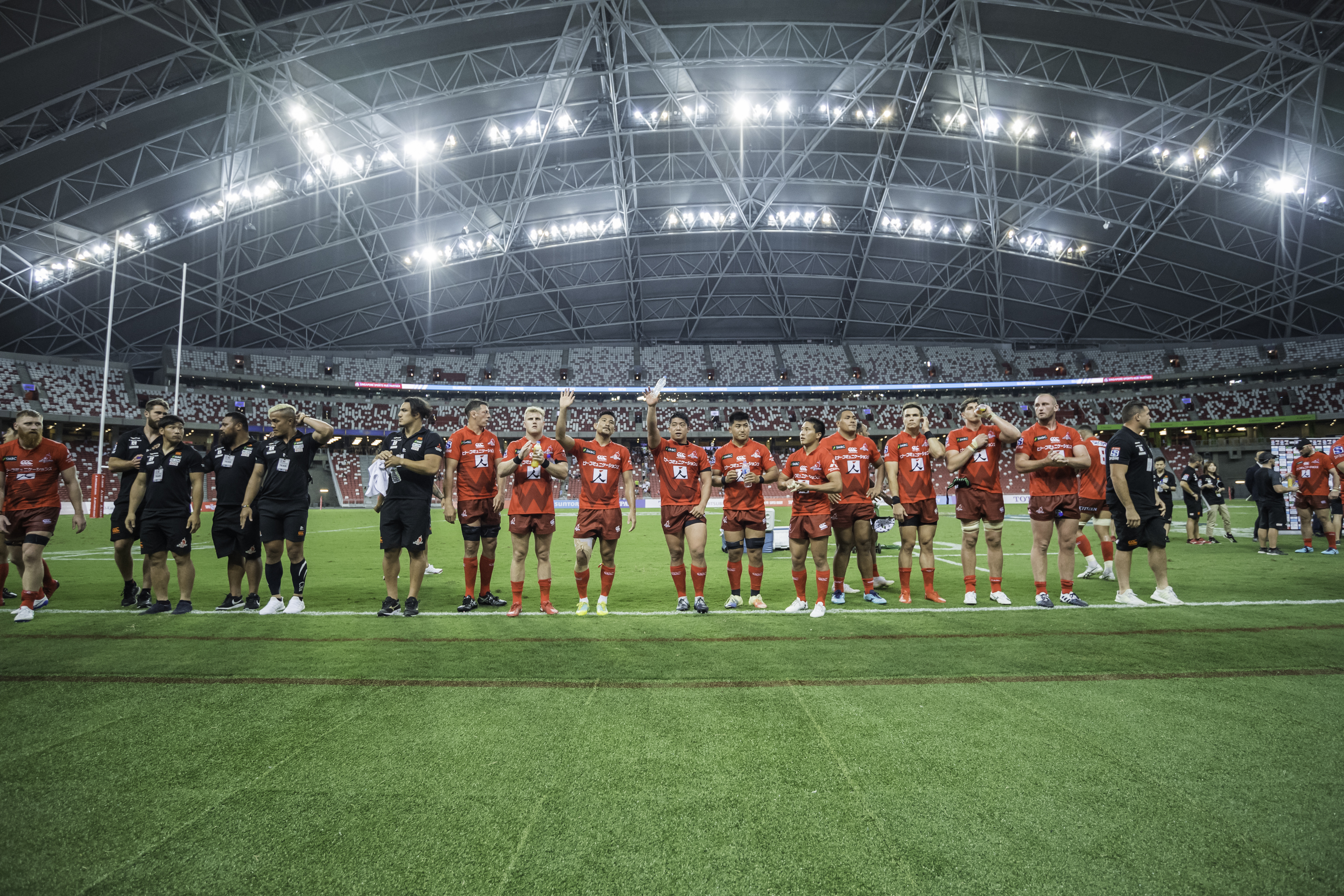 0 comments on “Super Rugby 2019: SUNWOLVES Put Up Determined Fight Against Sharks In First Match of 2019 despite going down 45-10”