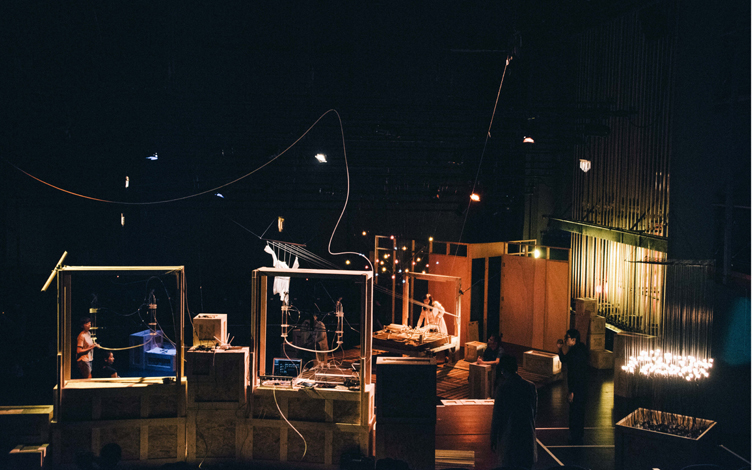 A musical soundscape through unorthodox means.

When John Cage’s controversial 4’33 premiered in 1952, never might the avant-garde composer have imagined the sheer impact he might have had in the field of music theory. Infamous for being four minutes and thirty three seconds of ‘silence’ as an orchestra stands still onstage, the work reflects Cage’s interests in Zen Buddhism, and his magnum opus epitomizing the theory that any sound can and should constitute music. Inspired by Cage’s philosophy, Taiwanese theatre company M.O.V.E. Theatre united music director/composer Lin Kuei-ju with interdisciplinary sound artist Wang Chung-Kun to create interactive performance piece/art installation Dear John, a direct homage and reference to Cage himself.

Building off of the concept, Dear John sees the company completely transforming the Esplanade Theatre Studio into a musical playground, with unusual structures and fantastical contraptions set up all around to facilitate the work. When one first steps into the space, one feels as if one has stepped into another realm altogether, with the otherworldly aesthetics of the musical devices all around us forming an almost an extra-dimensional spiritual repose. One noticed the sound of water dripping into a cylinder, its rhythm constant and pervasive, almost like a makeshift metronome to count the beats, the one constant throughout the entire show. 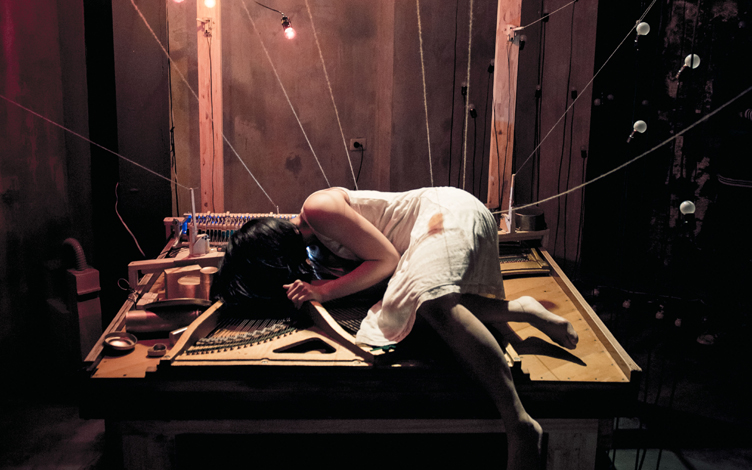 Encouraged to move around the space and interact with the various devices throughout the piece, Dear John takes the form of a sound laboratory, as experimental ways of making music are introduced throughout the experience and open audiences’ minds to alternatives to a traditional band or orchestra. Our musical journey began as performer Jian Ci-yi entered the space, puppet-like while dressed in a jacket fitted with a medley of strings attached to it. Each string controls specific keys on a ‘deconstructed’ piano, and every movement by Jian evokes a different note, allowing her to perform a short musical performance. With this unorthodox music production method introduced to us, a precedence is set, as various performers continue by demonstrating other unusual musical contraptions in their repertoire. 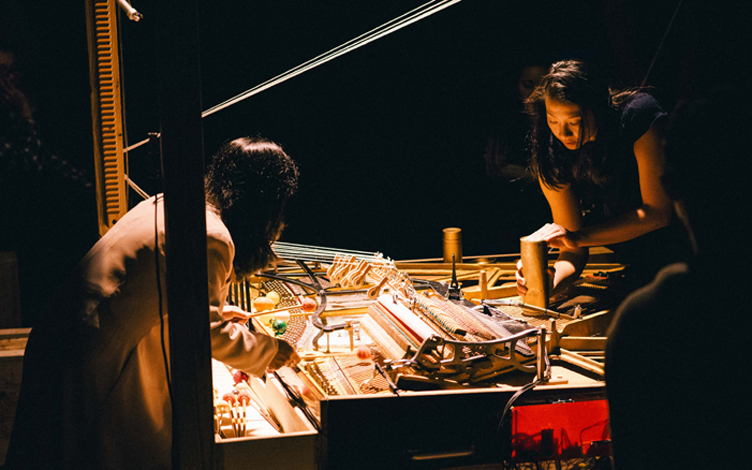 Ci-yi, for example, tugs on various chimes hanging from the ceiling, ranging from traditional metallic wind chimes to wooden ones, each producing different sounds before beckoning for audience members to try too. Wang Chung-kun take charge of a contraption comprising various cylinders, bringing to mind test tubes and beakers, making Wang a kind of ‘musical scientist’ as he embarks on his little sonic experiment. With the single click of a button, air pressure is forced through these cylinders via a pump to produce sounds, each cylinder unique due to differing water levels in each one. Later on, with the lights dimmed, Wang goes on to demonstrate how each cylinder produces both light and sound in a hypnotic choreographed sequence, and it’s no surprise why this award-winning artist is a rising star in Taiwan in the development of media art. 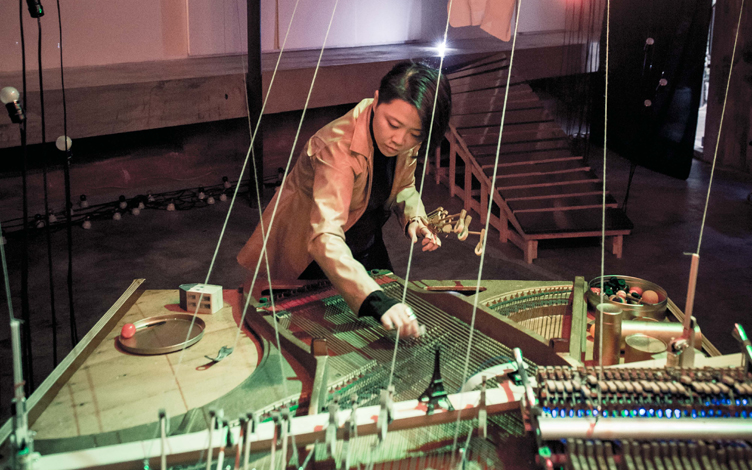 At one point, our focus returns to the deconstructed piano, where both Lin Kuei-ju and Jian Ci-yi were ready to perform. This time around, Ci-yi carefully places different metallic objects onto the piano’s strings, allowing Kuei-ju to produce various sounds from the reverberations with every key pressed. As practical as each demonstration is, the performers do manage to inject a dose of fun into each one, where in this case, Ci-yi plays a kind of guessing game as she attempts to anticipate the next key Kuei-ju will play, catching the predicted string in an attempt to silence it. 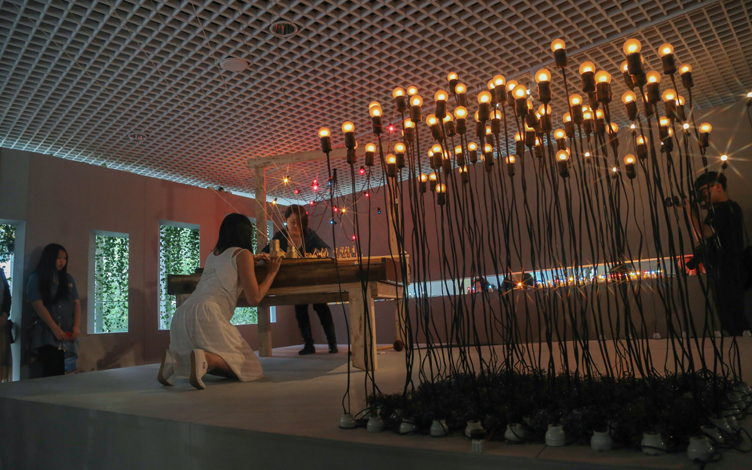 While individually, each contraption is already fascinating enough, M.O.V.E. Theatre still manages to surprise with a brilliant finale. Having introduced all the ‘instruments’, the performers programme each one to move and sound of their own accord through various mechanical means, creating an automated soundscape that seems to come to life all on its own. Accompanying these automated instruments was Ci-yi playing an accordion, while Kwei-ju hums and manipulates the stringed jacket Ci-yi was previously wearing, allowing it to dance freely in midair as the piano played, as if it too has been imbued with life due to the power of music. 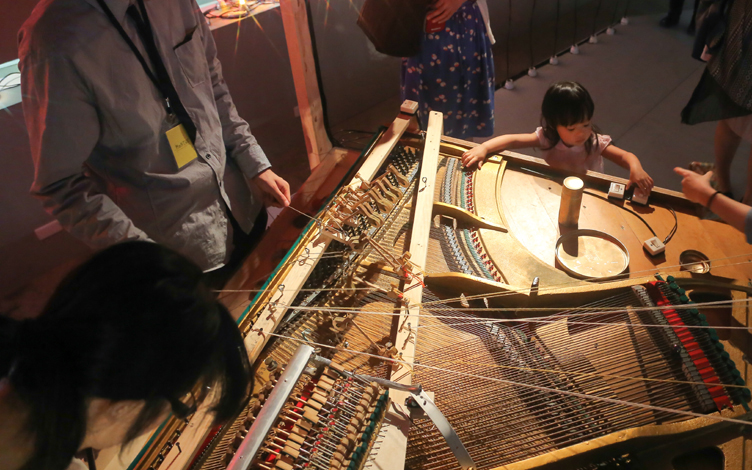 Reflecting upon the soundscape that M.O.V.E. Theatre has left us with, there is plenty of food for thought generated by this strangely serene, surreal space that has been created to perfectly facilitate the wonder of sound and participation. Dear John shows us the potential for anyone and anything to create music, its ambient soundscape leaving us calm and infused with hope and excitement for the unpredictability and potential of this piece. How brave, how bold, how beautiful a work M.O.V.E. Theatre has created, as we are left mesmerised by these esoteric sounds, drawn into this ethereal, otherworldly performance.

Photos from M.O.V.E. Theatre, courtesy of Esplanade, Theatres by the Bay

Dear John played from 15th to 16th February 2019 at the Esplanade Theatre Studio as part of the Esplanade’s Huayi – Chinese Festival of the Arts.