The Arts House plays host to Kamini Ramachandran’s troupe of storytellers in a supernatural-themed after dark special.

Who doesn’t love a good ghost story? As a historic building, the Arts House naturally lends itself as a space rife with phantoms of the past roaming its walls. As the home of literary arts, one then imagines that a natural extension to this would be to tell a plethora of spooky tales come nightfall, and that is precisely what master storyteller Kamini Ramachandran has done with her team from Moonshadow Stories.

In A Night of Terrifying Tales, audiences are led around the Arts House after dark to listen to a series of spectral storytellers, each one housed in their own room on the second floor as they prepared to tell incredible tales inspired by the bestselling True Singapore Ghost Stories series. The corridors dimmed, with lights eerily flashing on and off, the stage was set for the supernatural to creep right out.

(all titles are our own)

We began our roving experience with Jeremy Leong, gathered in a tight, intimate space illuminated by soft pink light. Playing the role of a former inmate, audience members gathered around to listen to his tale of the Chinese variation of the ouija board, as he and two audience volunteers summoned a spirit into a coin, while he told of the spooky accuracy of the answers to inmates’ questions when he played it a long time ago.

We moved on to the Blue Room with Daisy Mitchell dressed in a cheongsam, carefully arranging mahjong tiles in front of her. Despite the bigger space, Daisy still managed to leave us hanging off every word and draw us in with her speech, proving herself to be by far one of Kamini’s best proteges to emerge from her training. Telling a tale of a haunted stretch of highway in Malaysia, with each successive spirit raising the hairs on our back further still, almost lending a Gaiman-esque touch to her tales as they straddles the line of magic realism. 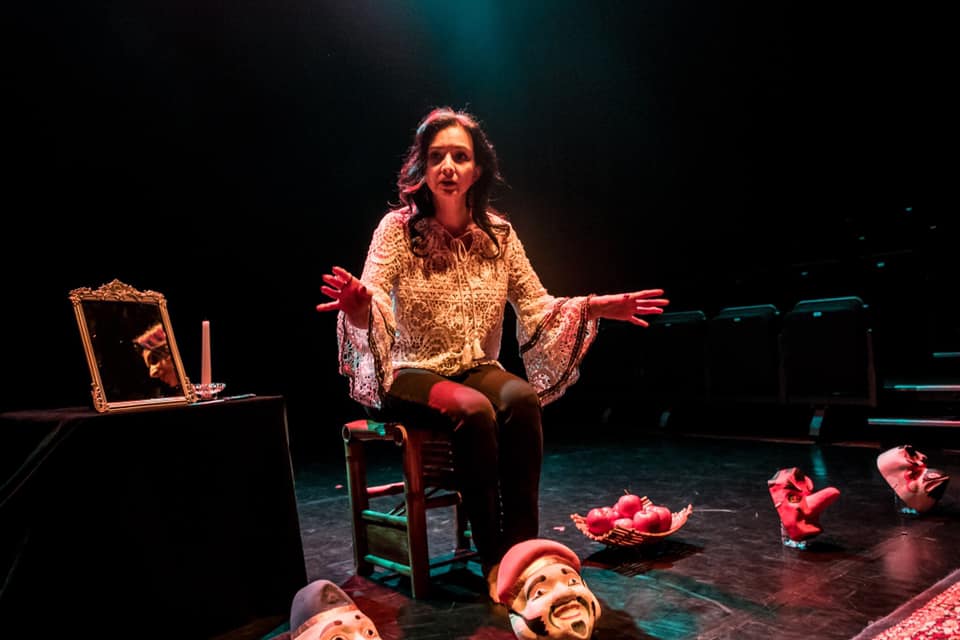 The third story we had was performed by none other than Kamini herself, taking place in a darkened Play Den. Seated on a carpet in the middle of the stage, Kamini’s space showed off her flair for drama, adorned with masks, and the props required to tell her tale of the midnight matchmake. Her voice almost a stage whisper, Kamini then ‘recalled’ her school days, telling of a girl who became obsessed with the image of her one true love, and the creepy consequences thereafter. What works particularly well for both this and the previous two stories was the surprising emotional undertones in each tale, allowing audiences to connect to each tale on a deeper level, and truly feel the supernatural as if we ourselves were present with these characters.

“Phantom of the Opera, But Not Really”

The night wore on as we entered the Living Room, far more brightly lit than the previous ones. Dressed in a suit, Derrick Tay played an original song on the piano, before telling a tale as a former real estate agent of a couple’s new house haunted by an uninvited guest. While it certainly had potential, the brightness of the room lacked a certain atmosphere required to truly set the story, while the airy nature of the room hindered Derrick’s voice from carrying clearly enough. A long table with empty chairs in the room remained underutilized, and might have been better manipulated to bring out the ghostliness of the tale.

We ended our night in the gallery, with duo Charlotte Lau and Fahim Murshed telling a tale set in a village kampong, about a woman seeking eternal beauty from a legendary witch, combining singing, clapping and a sense of the mystique. Attempting to get the audience to participate at this point was a slight struggle, having already sat through four stories, and of the five, this was perhaps the least engaging story of them all, made more difficult still because of the split focus between two storytellers (as much as they had chemistry).

While A Night of Terrifying Tales does have its flaws, it remains a bold experiment in presenting the world of storytelling in a new way, with well-curated stories that spark both fear and wonder in audience members. A good ghost story, when told right, soars like a chill wind in the dark, and with these tales in our minds, we slept with one eye open, our imaginations running wild as we lay in bed, both feared and excited as we dreamt incredible dreams of the supernatural till morning light.

Photos Courtesy of The Arts House

A Night of Terrifying Tales played on 9th March 2019 at The Arts House.

Textures 2019 ran from 7th to 10th March 2019 at The Arts House. For a full list of programmes, refer to their website here

3 comments on “Textures 2019: A Night of Terrifying Tales by Moonshadow Stories (Review)”