Museum Musings: Arus Balik – From below the wind to above the wind and back again at NTU CCA 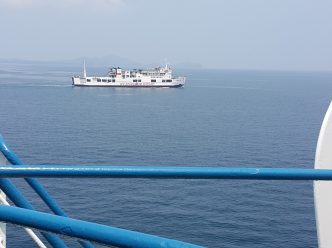 Initiated from a conversation between Belgian curator Philippe Pirotte and Jakarta-based artist Ade Darmawan, the two were considering Indonesian author Pramoedya Ananta Toer’s epic book Arus Balik (1995), which roughly translated can mean “turning of the tide.” In his fictional account, Pramoedya elaborates on the weakening of the maritime culture of Javanese kingdoms in the early 16th century, the progressive Islamisation, and the beginning of Portuguese occupation on parts of the now Malay and Indonesian peninsula and archipelago. The exhibition, as such, uses the novel as a starting point to reflect on perspectival shifts in geopolitical, cultural, social, religious, and natural spheres.

Ade Darmawan re-read Arus Balik with a special focus on how protagonists use natural resources, and will create a distilling dispositive with alkaline water from the straits, recalling that all the scrambling for the control of the archipelago was about the extraction of ore and goods. ila will question what it means to be Boyanese, Buginese, Minangkabau, or Javanese through encounters with Singapore residents now conflated as Malay. Their testimonies will be written on her body and wither, while exposed to salty water and weather on reclaimed areas of Singapore island.

Paradise Blueprint (2017), a wallpaper designed by Zac Langdon-Pole, based on a cyanotype photogram of the removed legs of a so-called “Bird of Paradise,” addresses the history of cultural exchange and mythology surrounding the birds native to Papua New Guinea. Lucy Raven creates silk paintings or monoprints, made by imprint of sedimentation in erosion tables, as scrim backdrops she uses for a forthcoming filmproduction, called Kongkreto, inspired by the 1991 eruption of Mt Pinatubo in the Philippines that finally chased off the Americans from Clark Airbase. Book-aficionado, artist, and writer Shubigi Rao delves into the stories related to the difficult conditions, but also extraordinary examples of solidarity Pramoedya faced on prison island Buru while writing Arus Balik.

A new video-installation by Melati Suryodarmo, Dancing under the Black Sky (2019), traces the history behind Reog performances, an art form of resistance and criticism of Ponorogo people of East Java towards Bhre Kertabhumi, a Majapahit king who slowly lost his authority in the 15th century, before Islam became a major force in Demak and controlled the coastal region of Java.

Through Arus Balik, NTUC CCA then seeks to imagine and re-look at the of histories and politics in processes of transition, such as colonisation and decolonisation. Have the multiple colonisations in Southeast Asia alienated the people from the sea coast? Is it possible to attempt a return? The reversal of the colonial fact, the promise of reversal of a geo-political, -cultural, and social systems, initially embodied by the Bandung conference in 1955, caused Afro-American author Richard Wright to write that “it smacked of tidal waves, of natural forces.” What implications does this hold for us as we reflect on our bicentennial year and our history of colonialism from 200 years ago? Perhaps Arus Balik may offer a sort of answer to that.