It can happen to anyone and everyone.

When Grace Kalaiselvi asked her actresses to read the poems of Sarojini Naidu in preparation for her all new Goddesses of Words series (aimed at highlighting female Indian poets writing in English), each performer somehow connected almost instantly with the theme of trauma, and more specifically, sexual assault. While not all of the poems necessarily put trauma at the forefront of their text, that thought process alone says plenty about the society and world we live in, formulating the key theme of the play. 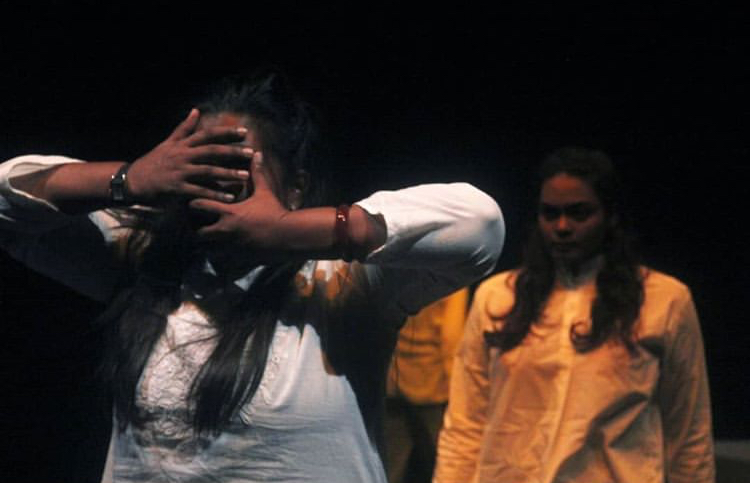 Directed by Grace, and starring Rebekah Sangeetha Dorai, Pramila Krishnasamy and Mumtaz Maricar, Goddesses of Words – Sarojini Naidu never holds back from being completely frank about its dark subject matter, presenting stories based on real life experiences of the actresses and their peers’ sexual assaults, from grown women to students, with perpetrators ranging from complete strangers to colleagues to ‘close’ family friends. 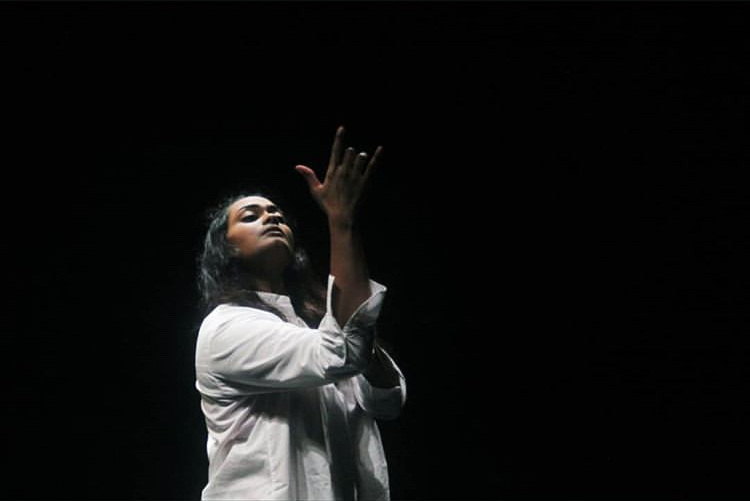 The sheer number of stories the actresses have managed to excavate is all the proof one needs that sexual assault and abuse is everywhere around us, happening to anyone regardless of background, no matter what age or how educated one is. As one listens to each of these tales, there truly is no basis of comparison as to ‘who suffered more’ – rather, each experience is uniquely traumatic in itself, brought out by each actress’s performances emanating pain and loss, and Raghavendra R. lilting flute music that cuts through the silence with often haunting tunes. 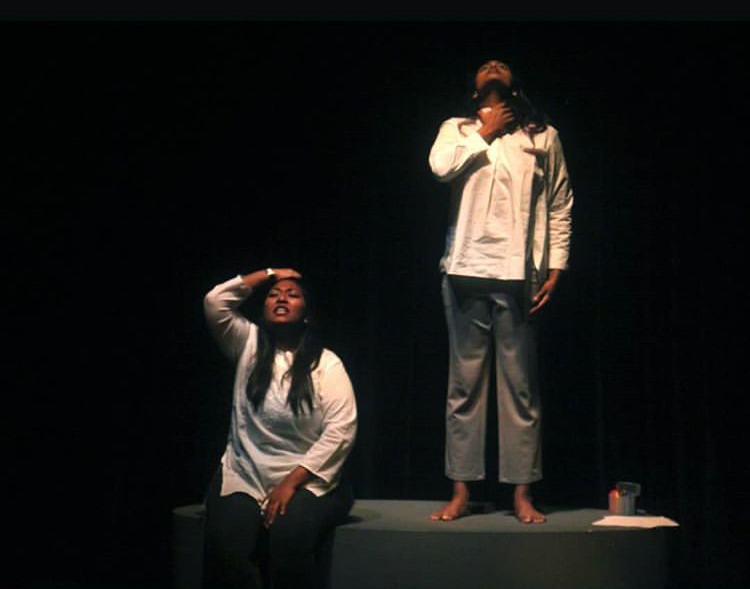 In between, Sarojini Naidu’s poetry is woven into the performance, transformed into song that the women sing, the lyricism on full display, almost ritualistic as they wail or chant the words out loud while etching on the ground a chalk drawing of a woman hanging by a noose, blood spurting from her wounds to represent the state of walking death many survivors often find themselves in, or physically hitting themselves, pulling their hair, lost and confused and breaking down as they wrestle with guilt, shame, and the myriad of emotions that accompanies each individual experience. 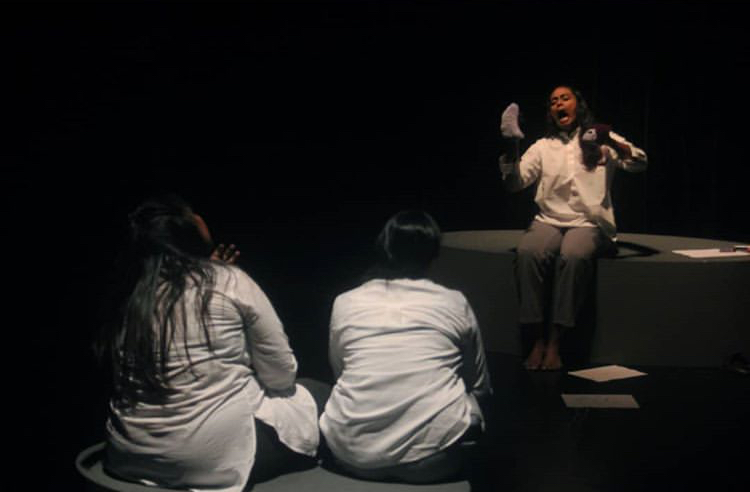 As heavy as all of it seems, director Grace somehow even manages to weave in some lighter material to change up the energy within the theatre every once in a while. These are essentially sex education messages and PSAs, with a lesson on consent told via a ridiculous, absurd metaphor of the desire to eat Nasi Biryani (it works surprisingly effectively), or getting audience members to vote on the political correctness of using the word ‘rape’ in sentences in everyday conversation, or even a gameshow like segment, in which volunteers are called to the stage to select ‘rape-proof clothing’ for actresses to don (spoiler alert: the answer is none of them). As entertaining and high energy as these segments are, there is discomfort behind the laughter evoked from these pieces, and we find ourselves tearing up a little at realizing just how messed up all of it is that we even need conversations about what should be such a basic concept to grasp – don’t do anything to someone without their consent. 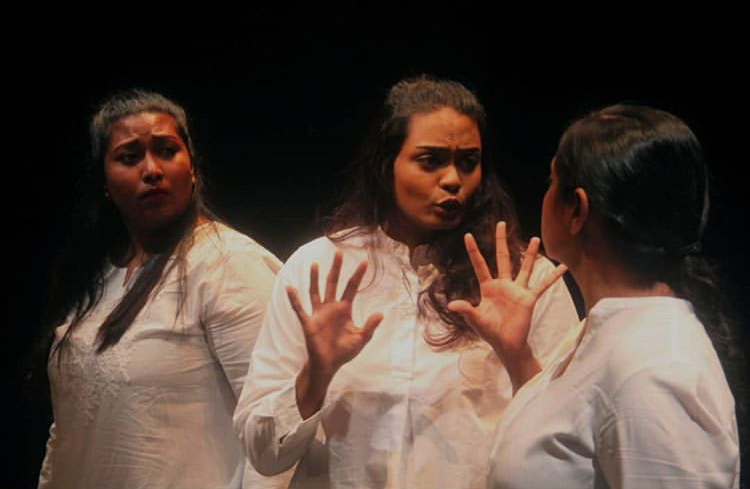 Sexual assault is by no means an easy discussion topic, and as difficult a subject matter as it is, Goddesses of Words – Sarojini Naidu has managed to go boldly forth and speak these truths that are often buried in the shadow of fear, leaving survivors to wallow in darkness and confusion that eats away at them slowly from inside out. The message this performance is trying to bring across is clear: this is a conversation that needs to start, an issue that needs to be more widely discussed, and for the realization that change needs to begin not later but now. 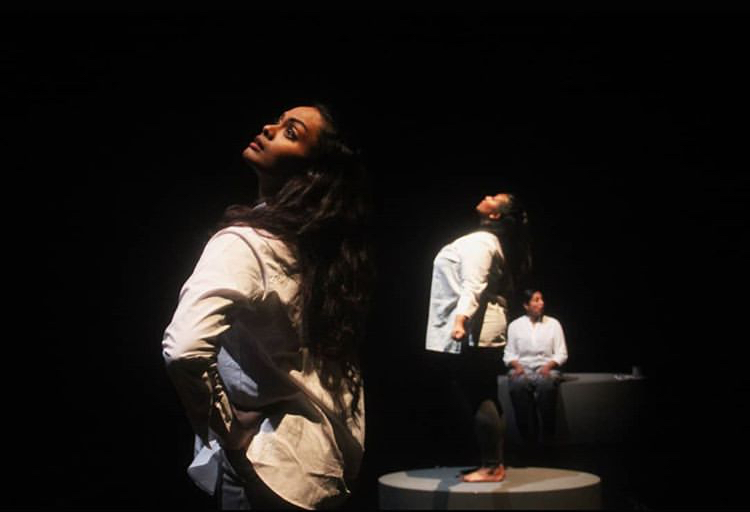 To end off, we think back to a scene in which the actresses, in tears, express their simple need to be wanted, to know that they have reason to live, and quite simply to be touched, opening their arms to the audience to receive a hug from anyone willing to give them one. One may not be able to completely eradicate sexual assault in a day, or erase the past, but as a society, perhaps to slowly unhitch ourselves from the toxic rape culture we live in, we must begin by showing solidarity and lending a listening ear or a hand to hold, assuring survivors that their story is worth hearing without fear of being slut-shamed or blamed for their attire, and perhaps then and only then, does the healing and change finally begin.