A terrace house in Holland Village becomes the site of haunting for childhood trauma.

Growing up, we often don’t think too much of the things we experience as children. After all, kids will be kids, and most people still turn out alright in adulthood, no matter what, right? In Drama Box’s latest production however, that childhood innocence is put under the magnifying glass, as FLOWERS takes audience members through the traumatising family history of a fictitious family living in Jalan Kelabu Asap. 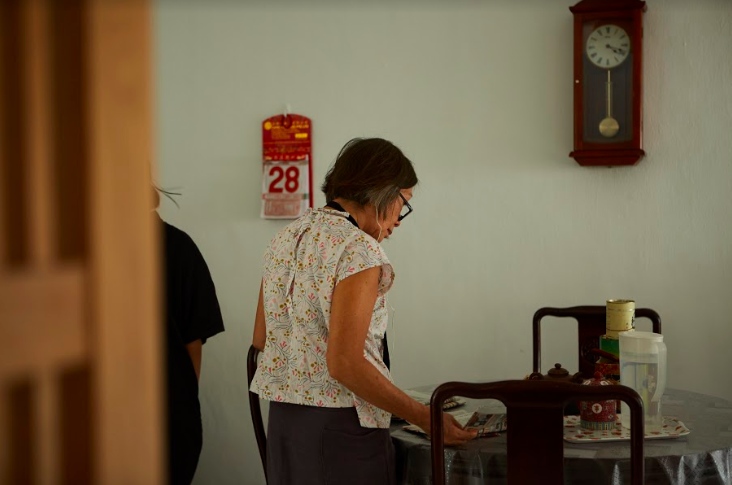 We mean this quite literally, as FLOWERS takes on an unusual theatrical format, more art installation than traditional theatre, combining immersive theatre, self-exploration and audio drama into one unique experience. Arriving at the stipulated venue (conveniently located right beside Holland Village MRT station), audience members are given a quick brief by FLOWERS creator and director Han Xuemei before relinquishing all our possessions, given only a cassette player containing an audio monologue as we enter the house and left to our own devices for 70 minutes as we explore the house and attempt to unravel the lives of the people who lived in it. 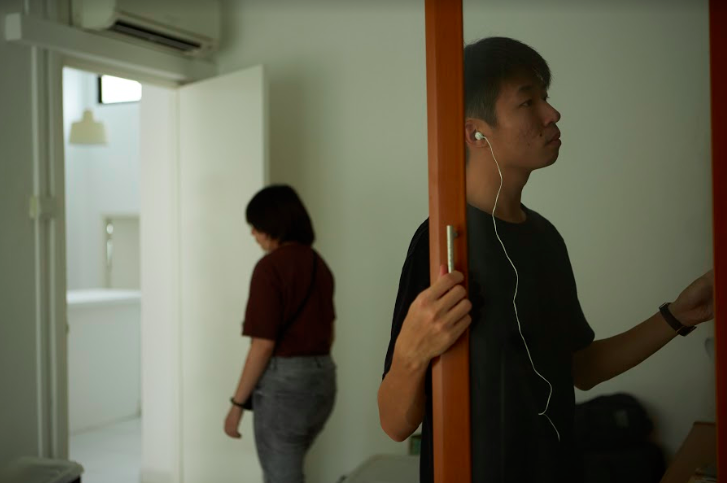 During our visit, we are instructed to listen to the audio monologue on the cassette, allowed to start and stop it at any time as we see fit. Written by Jean Tay, Ann Lek narrates a series of recollections from the point of view of an unknown female protagonist who once lived in the house, telling of her childhood before moving away, recalling her loving mother, her artistic brother, their volatile father, and most significant of all, the recurring symbol of flowers, a symbol of vulnerability yet resilience in the face of trauma. As an anecdotally driven hyperrealist narrative, the prose is emotive and lyrical, and listeners are never guided to think about a specific message, instead, are encouraged to formulate their own conclusions and interpretations of the reasons behind her departure, the tense family dinners, and their resulting effects on the family’s life. Throughout, one cannot help but feel the uncomfortable, nagging feeling of something painful that lingers in her voice, something that spreads and manifests itself in the very walls of the house we find ourselves in, slowly encroaching and suffocating us with its clammy claustrophobia. 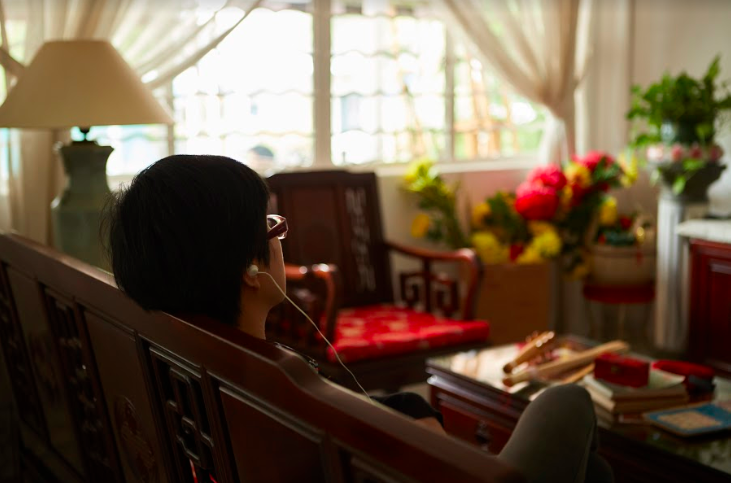 While exploring the two storey building, we are allowed to open cupboards and drawers to learn more about the family’s history and possessions in detail. Our only other companion is the male patriarch of the house (depending on your session, played by Lim Chiong Ngian, Thomas Lim or Yong Ser Pin), the father of the monologue’s narrator, absent-mindedly going about his day, from watching Channel 8 on TV, to sipping tea, to returning to his room upstairs to go over his items. At no point does he notice or interact with guests – we are merely silent observers to his lonely life of solitude, his internal thoughts all but a mystery to us as he emanates a quiet regret or sadness that follows him wherever he goes. 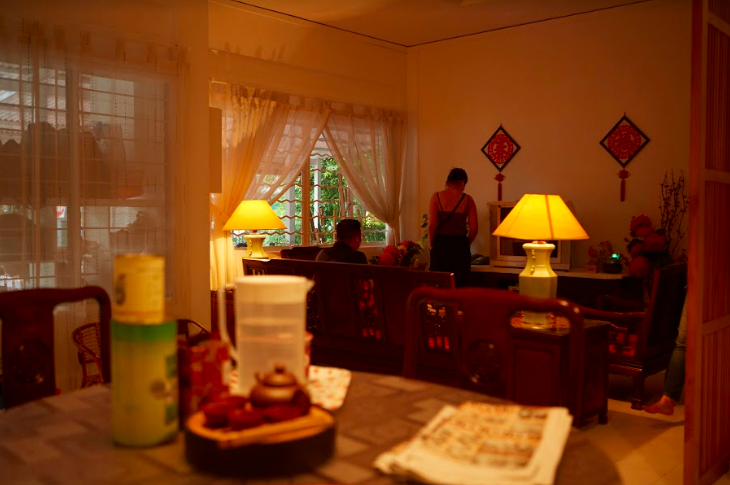 The entire house has been intricately decorated and arranged to give the impression of a real place with history and thoroughly lived in. There are so many familiar elements to anyone who has grown up in a (Chinese) Singaporean household, from the tank of (live) guppies, to the many cupboards filled with vintage paraphernalia from the 90s and early 2000s. The level of painstaking detail that has gone into maintaining such a place is unimaginable – a paper lunar calendar reflects today’s date (along with a current copy of the latest Lianhe Zaobao), recent betting slips in the father’s room, Marvel posters and army photos pasted up in the son’s room (and even well hidden soft porn), and in the daughter’s abandoned room, a cupboard containing items such as an album of collectible phone cards and even a giant, unopened Hello Kitty plush still in the cardboard box. 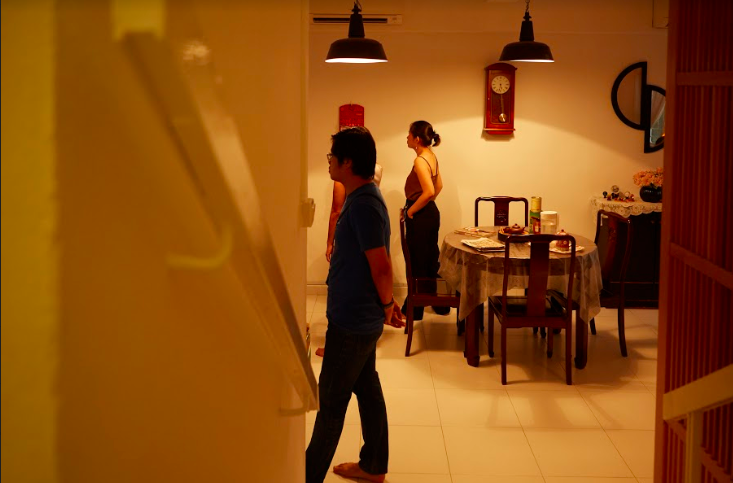 There is something strikingly unsettling about being in such a space, allowed to touch and pore over all these fiercely personal effects, almost as if we are investigating a simulacra of our own lives in order to uncover the answer to our own childhood traumas. One may feel intrusive and awkward at first, but must realise that the more one is willing to explore, the more one will take away from the experience. The one hint we’re going to give is to ensure you hit every nook and cranny of the upper rooms, where papers in files or even metal biscuit tins are integral to understanding and enhancing the story. In poring over a pocket photo album, one gets the sense of the parents’ relationship told through photos, rife with nostalgia and spectral memories and emotion that flow throughout the building, feeling as if the ghost of the narrator’s childhood past is haunting and following us on our exploratory journey. One does wish however, that there were more story-specific hints to discover, rather than the small number we found, with most of the props’ purpose limited to creating atmosphere. 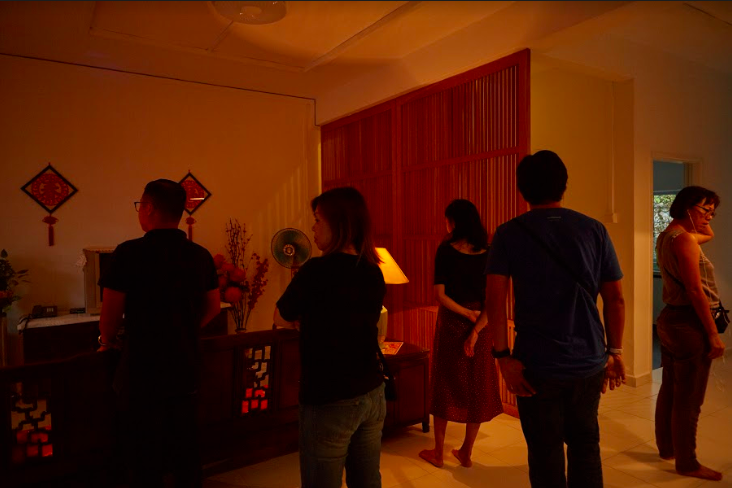 FLOWERS may not provide any sagely answers, but what it does do is strike a chord with its surprisingly resonant presentation of a typical family, teasing out audience members’ own memories simply by providing a space and narrative by which to project our own past on, a snapshot that provides the opportunity and outlet for our own reflection. FLOWERS is simultaneously specific and universal with its dealings with patriarchal violence and its resultant effects, subtly affecting yet haunting in how it clings to us even after we leave, and a bold experiment for Drama Box to produce and delve into, and a rare, innovative theatrical form we hope to see develop and manifest more and more frequently in the local arts scene in time to come.