If there’s one celebrity to look out for each year at the Met Gala red carpet, it’s Rihanna. And back in 2015, when the theme for the Gala was China Through The Looking Glass, the Barbados singer-songwriter stunned with an impossible-to-miss, yellow gown, its long train pooling into a golden circle, as the cameras snapped away.

That iconic dress was designed by none other than Chinese couturière Guo Pei, who was in Singapore recently to attend the opening of the Asian Civilisations Museum’s (ACM) newest exhibition – Guo Pei: Chinese Art and Couture. Opening the museum’s Season of Chinese Art, the exhibition marks a turning point for the otherwise traditional ACM, as they bring together these contemporary outfits and juxtapose them against historical artefacts and patterns, examining the relevance and impact of Chinese art, and how Chinese aesthetics and traditions are being reimagined for the world today.

Guo Pei herself has had a fascinating life journey in fashion, spending most of her humble beginnings designing clothes to sell and earn money. However, this ultimately proved unfulfilling to her, instead pushing herself to start her own label, and doing what she wanted to do, not for the sale but to create her own vision. Although there were times when people chided her for her dreams and didn’t understand what she was doing, eventually, with her first collection “The Magnificent Gold”, taking over 50,000 hours of labour to create, people finally began taking notice of her work, and recognized her for the artist that she was.

In the exhibition itself, spanning two galleries, 20 Chinese art masterpieces from the Museum’s collection and 29 dresses by Guo Pei will be featured. Says Mr Kennie Ting, Director of Asian Civilisations Museum and Peranakan Museum: “Guo Pei: Chinese Art and Couture is significant to our visitors, as our first special exhibition dedicated to fashion and is representative of our shift to the contemporary domain. Our aim is to make a point as to how heritage and tradition are very much relevant to the contemporary; that heritage and tradition can be remarkably sexy and alluring. Every masterpiece in the exhibition is a unique blend of contemporary and traditional design, material and craft.” 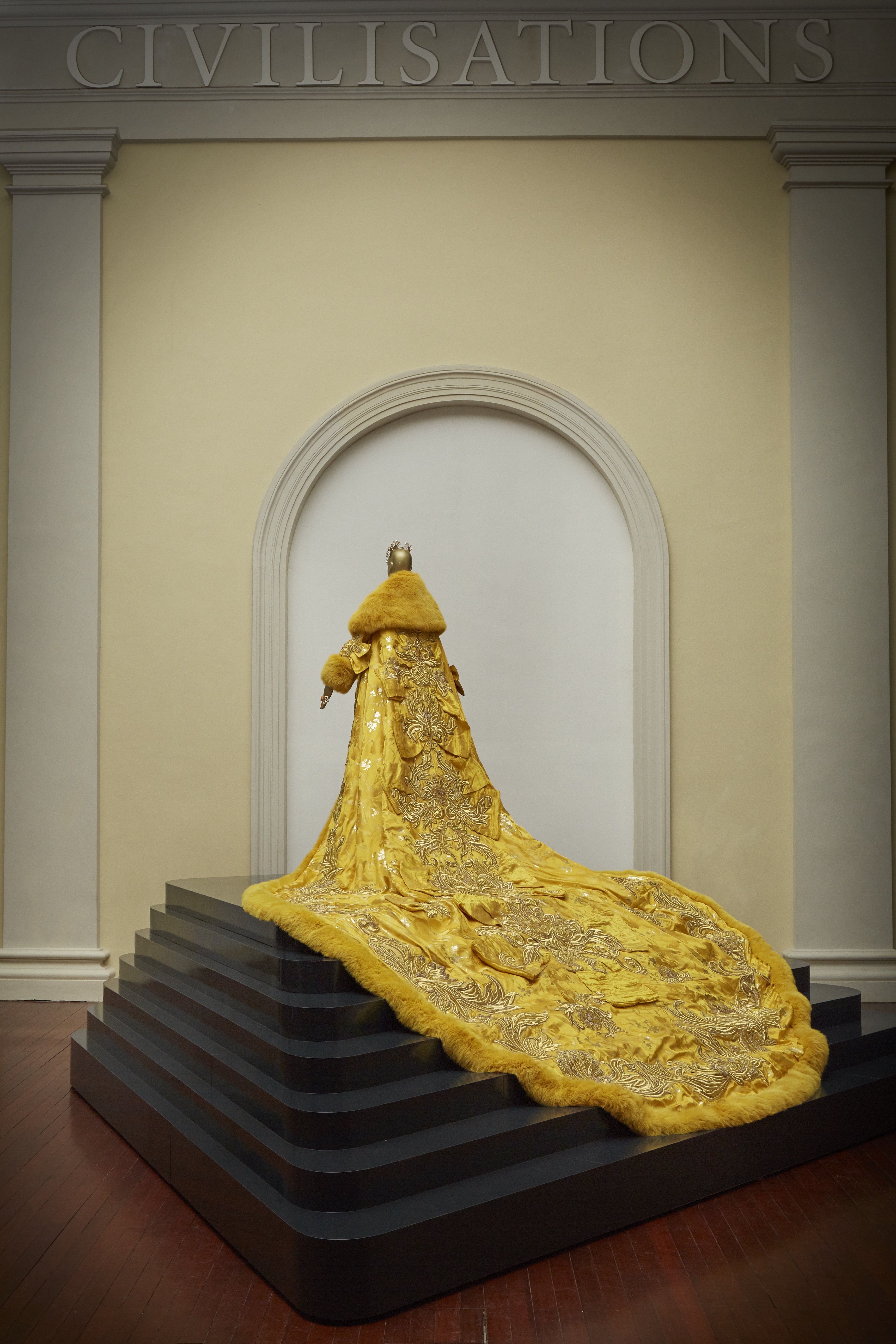 The exhibition begins, as expected, with 黄皇后 (Yellow Queen), the iconic cape worn by Rihanna to the 2015 Met Gala. A symbol of Guo Pei’s breakthrough to an international market, the dress also represents a moment in time when the world encountered and engaged – through countless reactions, conversations, and memes – with a masterwork inspired by the imperial China. As Guo Pei herself says, this remains her most famous dress to date, thanks to Rihanna, and the one that put her on the world map. Rihanna herself has stated that it remains one of the best red carpet dresses she’s ever worn, and has garnered multiple accolades for Guo Pei.

Throughout the exhibition, dresses are paired up with Chinese art masterpieces, showcasing the best of Chinese traditional craftsmanship as well as modern couture techniques in the expression of creativity and storytelling. These reinventions of Chinese tradition have then continued to fascinate the world today and provoke visitors to consider how the past continues to inspire the future with these modern interpretations. For instance, 大金 (Magnificent Gold) sees Guo Pei incorporating prevalent Buddhist symbols in Chinese art into the design, leading to the dress being hailed by the China National Silk Museum as “the birth of haute couture in China” for its technical mastery and incorporates elaborate embroideries, similar to the kind used to produce thangkas (paintings or embroideries on scrolls) depicting Buddhist deities and scenes.

In ‘China and the World’, we see classic Chinese patterns of flowers, crests, and clouds, not just on the precious blue-and-white porcelain, but also incorporated, using the same method of brush painting blue pigment, on Guo Pei’s sculptural masterpiece 青花瓷 (Blue-and-White Porcelain). For all of these, Guo Pei was highly dependent on her team of artisans study the embroidery and patterns on historical artefacts to refine their techniques and accurately depict these patterns and pictures on the dresses themselves.

The continuation of Chinese artistic traditions and culture by the Chinese diaspora is evident in the many cross-cultural masterpieces in this exhibition. Guo Pei’s bridal collection, which has been embraced by Chinese celebrities and other wealthy clients, was inspired by historical bridal ensembles made in China, but imported to Southeast Asia worn by Peranakan Chinese brides here. One of her creations, shown in the ‘Treasured Heirlooms’ section, was the genesis for this collaboration between ACM and Guo Pei. The couturière saw a bridal ensemble in the Peranakan Museum’s travelling exhibition on Peranakan Chinese art in Paris back in 2010. Her interpretation of that Peranakan bridal ensemble, worn by Angelababy for her wedding, was seen by exhibition curator Jackie Yoong. She made the connection to the Peranakan Museum’s historical bridal ensemble and then began to conceptualise this exhibition.

Says Kennie: “Both ancient and modern works featured in this exhibition truly represent the best of the civilisation. One thing about the ACM is that we’ve always been making exceptional acquisitions, and you’ll see a majority of pieces that are aesthetically, masterpieces, many of which have a specific provenance or story behind them. That’s especially important when we want to engage the younger generation, and showing them that yes, even 1000 year old pieces can be cool.”

“As for the collaboration itself,” he adds. “Guo Pei connected with us on a very personal and professional level. She likes to talk about this thing called the verticality of culture, and how you can bring roots into relevance today. It was a very natural collaboration, and her first proper exhibition in Asia. With our pieces in dialogue with hers, this ended up becoming a show about Chinese art history, and how it’s managed to reinvent itself even in the present day, and probably one of the best ways to teach an otherwise dry topic! Whether it’s  imperial art, export art, or folk art, we wanted a show that would introduce visitors to aspects of Chinese art  in a completely unexpected and, hopefully, very memorable fashion.”

Kennie concludes: “I’ve been scolded for attempting to do a fashion exhibition by the board and stakeholders, but I think after seeing the show, they’re finally convinced of why this show is important, and how it ends up revitalising the museum for a new generation. This museum needs to speak to the next generation, and Guo Pei, well, she’s very cross cultural, just like the museum’s mission, so it all aligns.”

As part of the exhibition, there will be a series of complementary family friendly programmes, guided tours, lectures, and weekend festivals. This includes a talk with prolific fashion, celebrity profile, and exhibition catalogue photographer Russel Wong; and a Chinese opera-themed Asian Culture and Music Series (28th and 29th June), with traditional performances and modern renditions, workshops, and a chance to be dolled up in the iconic opera make-up. Other exhibitions to look forward to later this year include a special exhibition showcasing the collection of Southeast Asia’s renowned Chinese art collector, the late Dr Tan Tsze Chor in November, featuring paintings by important modern Chinese masters like Ren Bonian, Qi Baishi, and Xu Beihong.