Historically, cabinets of curiosities have acted as precursors to the modern museum – touring exhibitions of kooky, out of this world artefacts and curios inspiring wonder and joy in all its visitors. In much the same vein then, Cirque du Soleil’s Kurios: Cabinet of Curiosities is just as charming as its name suggests, not just simply presenting a series of curious acts, but immersing us completely into its gloriously steampunk world. 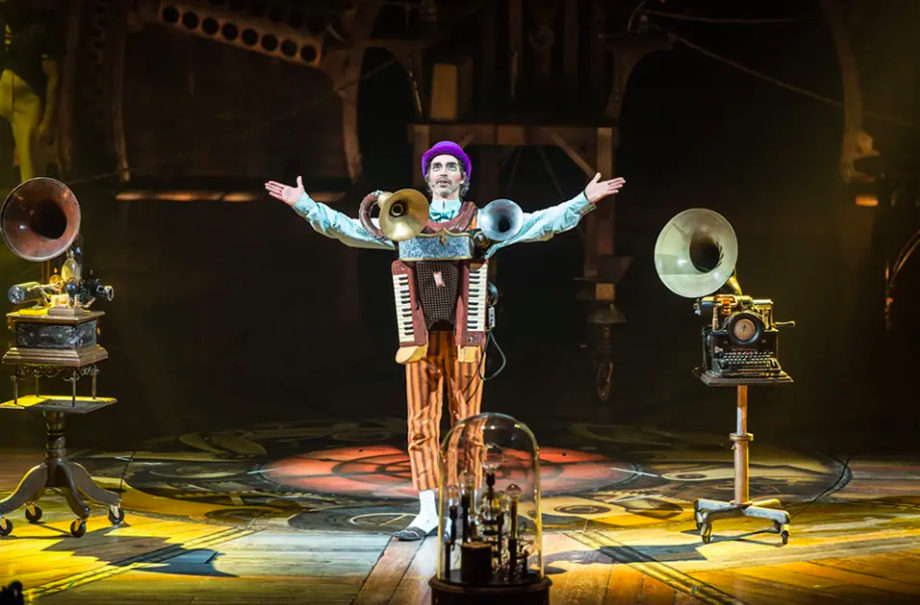 Directed by Michel Laprise, from the moment one steps into the big top, one is filled with a sense of wonder as we witness the hustle and bustle of activity all around, with plenty of families and first time audience members bursting with excitement to see a circus as they milled around snapping photos and buying popcorn. As we settled into our seats, one felt transported straight to a bizarro parallel reality, as we observed the countless strange contraptions and Jules Verne-esque machinery onstage, while lab-coat clad assistants ran about haphazardly as part of the pre-show antics. 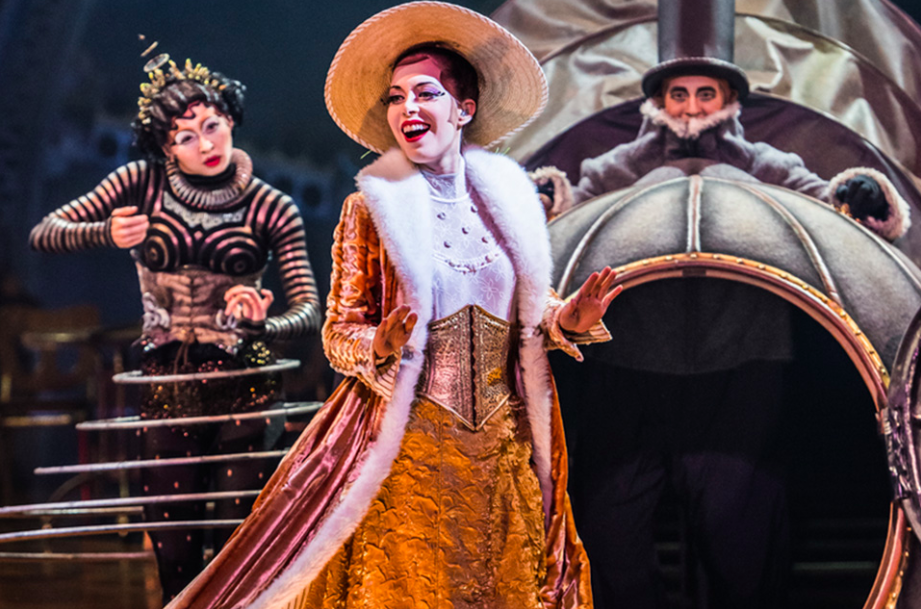 While Kurios’ narrative follows an optimistic scientist as he attempts to uncover the secret to happiness and imagination as he examines his cabinet of curiosities, it is a story that is never made explicitly clear as the show unfolds. But honestly, none of this is necessary, as Kurios’ greatest strength lies in its epic world-building and dedication to spectacle. Opening with the appropriately titled Chaos Synchro 1900, cast members run around the big top amidst the audience while carrying a miniature train, making it speed past tiny forests and other landmarks, while accompanied by frenetic jazz and scat singing. It returns to the wings, only to emerge again onstage, this time fully formed, as it chugs out, the train conductor’s torso seemingly fused with the giant train costume to form a steampunk chimaera. 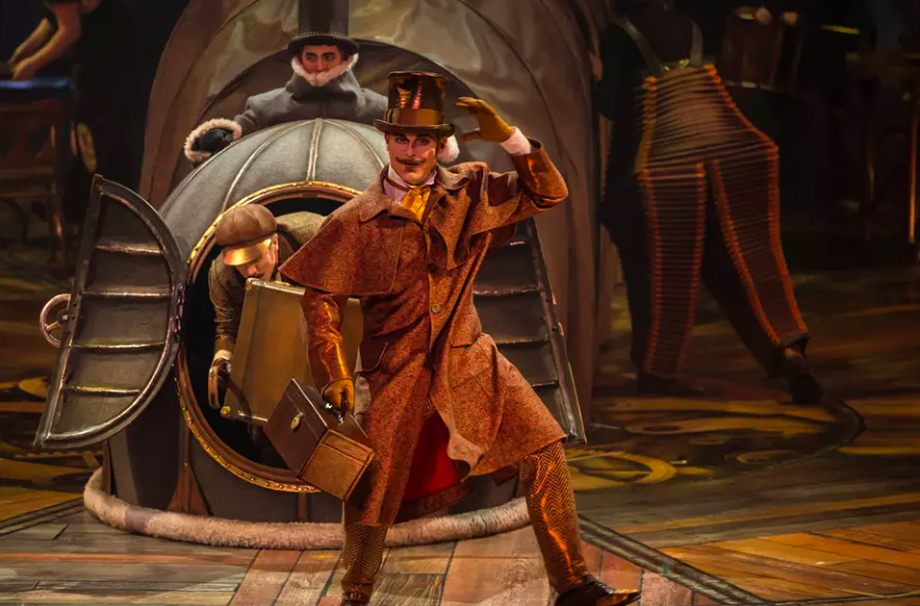 With a quick toot, the train doors open, and out spring Kurios’ seemingly endless, colourful cast of characters, from Nico the Accordion Man, dressed in his accordion-like suit that allows him to bend and stretch any which way he pleases, to Klara ‘The Telegraph of the Invisible’, clad in a skirt comprising several rings, representing a satellite dish. All of this, accompanied by the ensemble in Victorian-style outfits, while the live band appears, visible at the back of the stage, playing a medley of lively gypsy jazz music that helped transport us straight to the 1920s and the peak of the Industrial Revolution. One could practically allow everything outside the tent to just fade away as we immersed ourselves completely in this incredible world Cirque had constructed for us, a world brimming with possibilities with the advent of new technology, where anything and everything could happen right here. 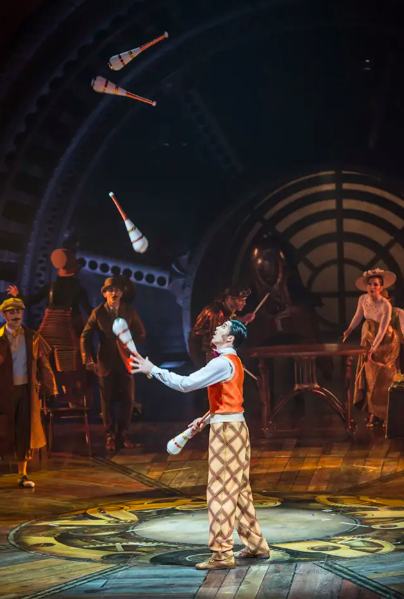 Juggler Gabriel Beaudoin begins the night’s acts amidst the chaos; as he juggles, the energy from the opening number has already affected the audience and makes them bay for more, with every successful catch leading to a round of applause. Suddenly – he is lifted by way of harness, still juggling, and the audience gasps as he maintains his cool, still catching every club in time with the music. 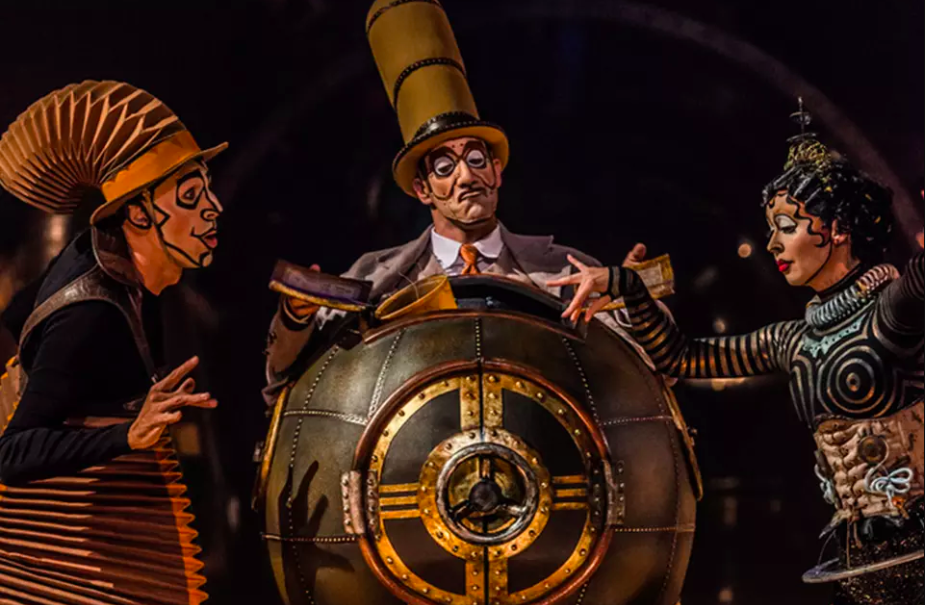 With the opening act energising and enthusing the audience, our night begins proper with the Invisible Circus. Led by Argentinian clown Facundo Gimenez, this rather unusual act sees an empty set of small circus paraphernalia rolled onstage, from a high-dive act to even a unicycle on a tightrope. The twist of course, is that the performers are not only tiny, but also ‘invisible’ to the human eye. While this has all the potential to come across as kooky, Kurios’ comedian is charming enough that he sells the acts entirely to us – when he fails to catch an acrobat, he ‘picks’ her up only to receive tight slaps across the face, while an invisible lion is almost certainly the highlight of this act, jumping through a flaming hoop. As a whole, it’s a risky but inspired performance that not only acts as a homage to classic circus acts, but also reminds us immediately of the power of our imagination, and its ability to create entire worlds before our very eyes. 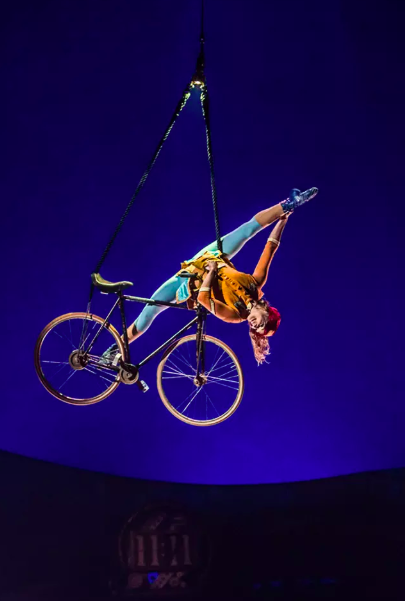 As the Invisible Circus rolls away, Anne Weissbecker zooms onstage on a vintage-looking bicycle, before it is suddenly lifted into the air. Still pedalling, it is as if she has been blessed by the power of flight as she takes to the skies, her facial expression of pure joy all one needs to feel that same level of happiness while the bike swings in circles above the stage. As she gets off her bike midair and dangles from the handlebars and wheels while performing splits, one is left awestruck by this twist on the traditional circus rings act, leaving us behind as she flies away into the great beyond. 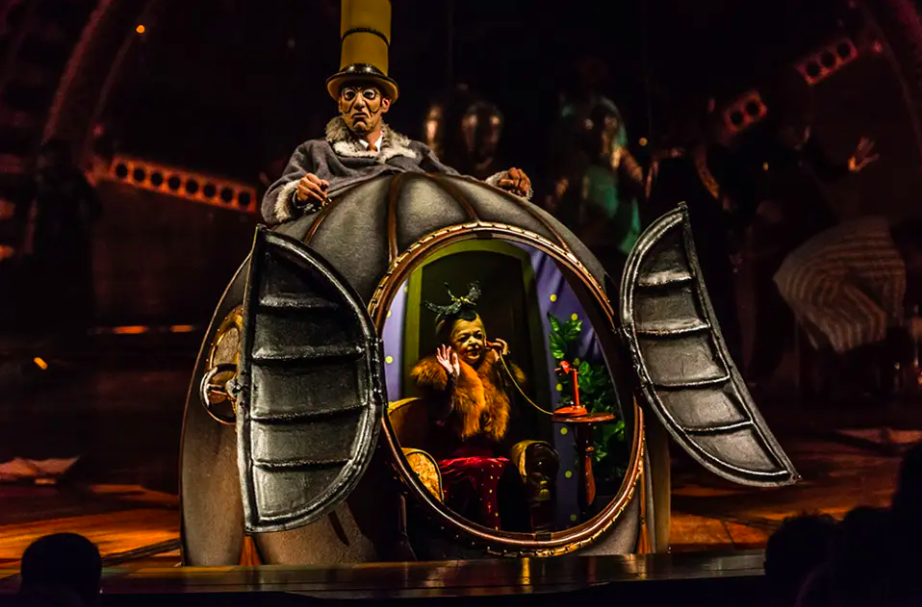 Amidst the many death-defying acts also come the performative ones, where the actors bring their characters to life in their interactions. While one may not understand their speech, it is impossible not to widen one’s eyes just a little as the diminutive Mini Lili (Rima Hadchiti) opens a hatch and pops her head right out of curios leader Mr Microcosmos’ (Karl L’Écuyer) mechanical belly. The duo recur throughout the performance and are always a delight to watch thanks to their natural onstage chemistry – who doesn’t love watching a little person chatting away on the phone in her tiny, mobile Victorian home housed in a man’s dress? There is something quaintly moving about the way Rima interacts with her fellow cast members, a grown woman in the body of a child, seemingly occupying the space of both the fragile and wise. 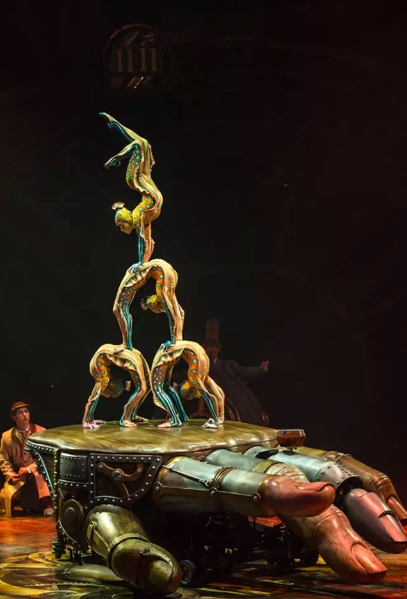 Set pieces also contribute greatly to Kurios’ world-building and feature prominently in several acts – we watch as a giant mechanical hand arrives onstage, while a team of contortionists (Imin Tsydendambaeva, Bayarma Zodboeva, Ayagma Tsybenova) twist themselves into impossible positions atop it. While not a new act, the contortionists were in perfect sync with each other, leading to a very elegant, graceful execution, made even more significant due to the presence of the giant hand. 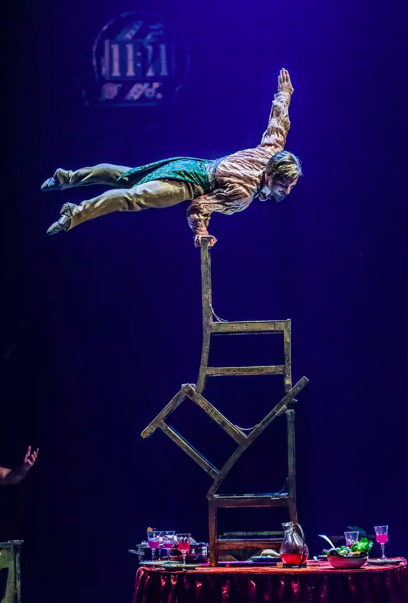 Kurios is at its best when it presents traditional acts given new context, with the acts telling their own story as they play out before us. This is expressed most clearly with Upside Down World, as Andrii Bondarenko begins stacking chairs one on top of another as he is challenged to reach a faulty chandelier. To everyone’s surprise, it is later revealed that this chandelier is shared between two parallel worlds, and exact copies of the characters sit upside down, perched above them from the ceiling. The logic behind this is never explained, nor does it need to be. The guests on the ceiling begin building their own shaky tower towards the chandelier, a gravity-defying illusion that leaves one’s head scratching. Coupled with Bondarenko’s charm, just watching the incredulously whimsical scene play out is enough to capture our imaginations, and the often pedestrian act of balancing atop chairs is given new life in this interpretation. 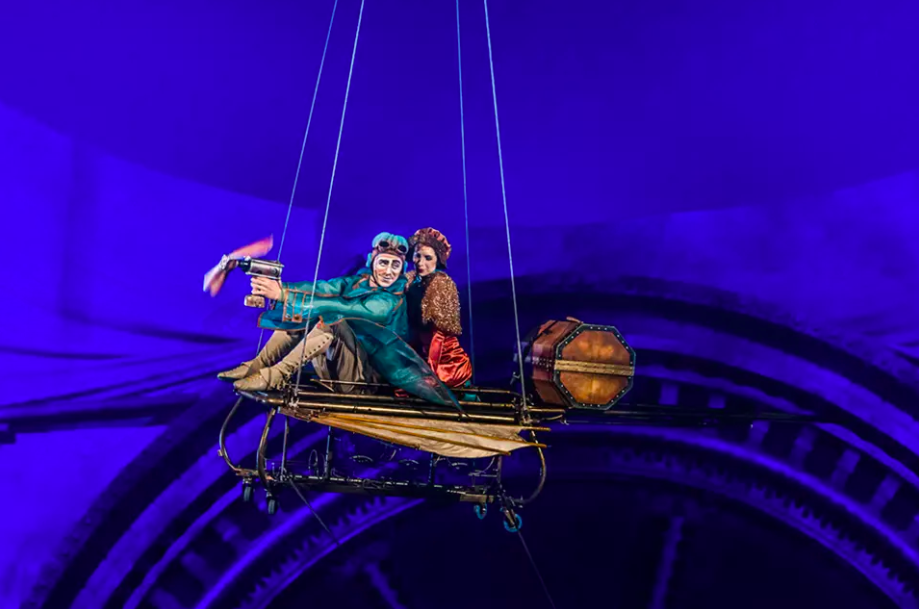 In the finale of the first act, James Eulises Gonzalez, dressed as an aviator, literally flies down from above in a mechanical plane. So much of Cirque’s strength is seen in this simple sequence, with directorial detail that helps paint a full picture – seeing the moment of panic in his eyes as his ‘propeller’ stops working, but managing to safely land. 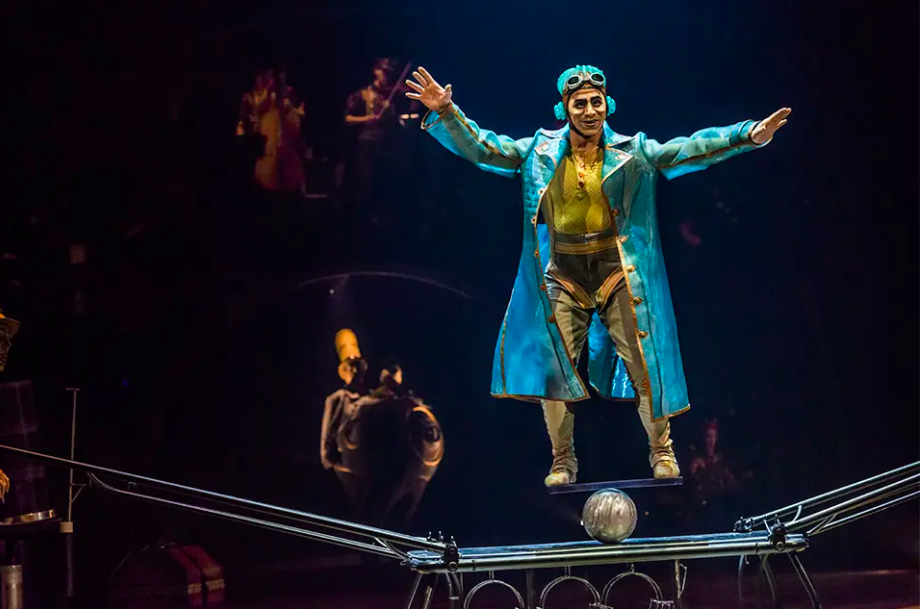 The plane then becomes a platform for Gonzalez to perform his Rola Bola act, excelling in working the crowd as he builds their excitement with each iteration bringing him to greater and greater heights, at one point even seeing him maintain his balance while the platform is swung back and forth in mid-air. 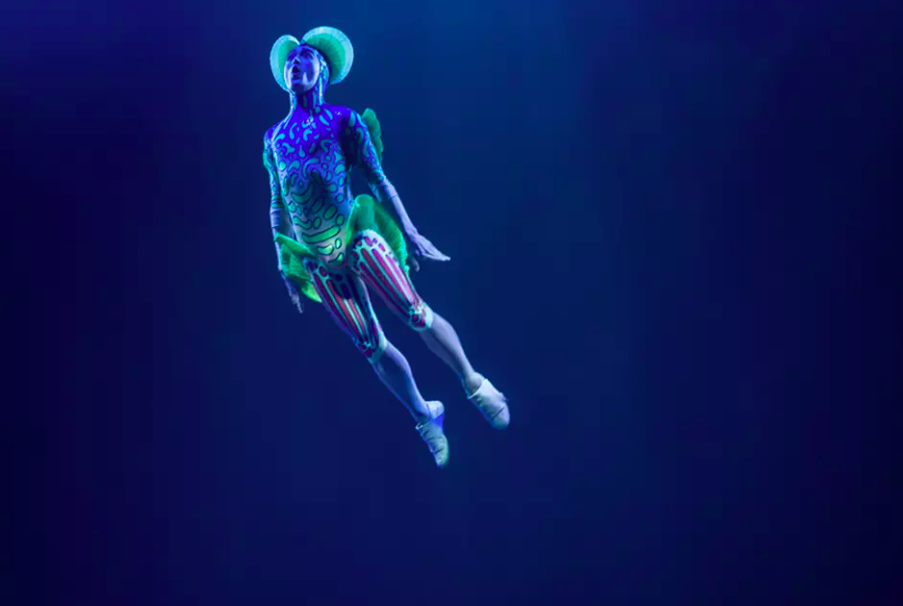 Never letting the energy dip, Act 2 began strong with Kurios’ Acro Net act. Dressed in raincoats and falling from clouds, the acrobats quickly disrobe to reveal they are in fact, some kind of colourful, underwater creature. This trampoline-style act moves at such velocity that one is immediately swept up in the rhythm of the act, as each bounce and rebound takes them higher and higher, almost like a horizontal slingshot that catapults them smoothly through the air, giggling as they fly and when they fall. 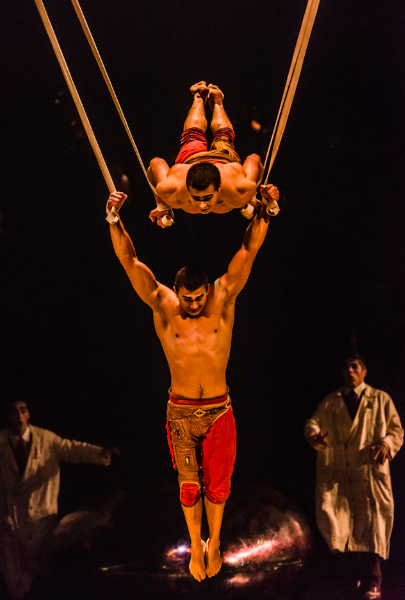 This same energy is felt throughout most of Act 2, coming in during the aerial straps act as the ‘twins’ impress in the familiar stunner. Showing off their rippling, muscular torsos, the display of strength is tempered with grace as they choreograph their movements to crisscross just inches from each other, a feat requiring expertise coordination no doubt build up over months of rehearsals. 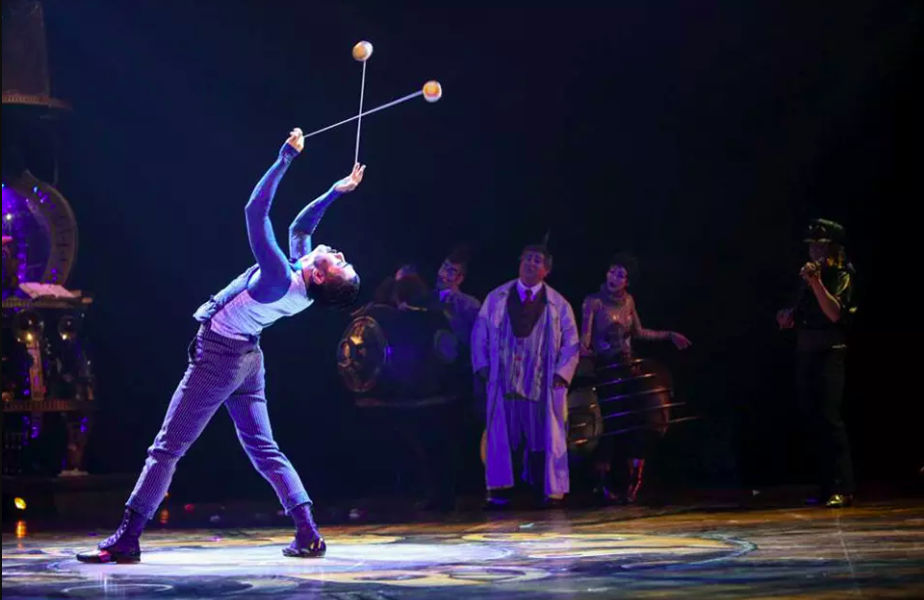 Even the surprising Yo Yo act, while simple in concept, is buoyed by Taiwanese performer Chih-Min Tuan’s showmanship. Dressed in a sharp suit, one cannot take one’s eyes off the yoyos as he spins them rapidly before bringing them to a slow, as if he himself is manipulating our attention, in complete control. 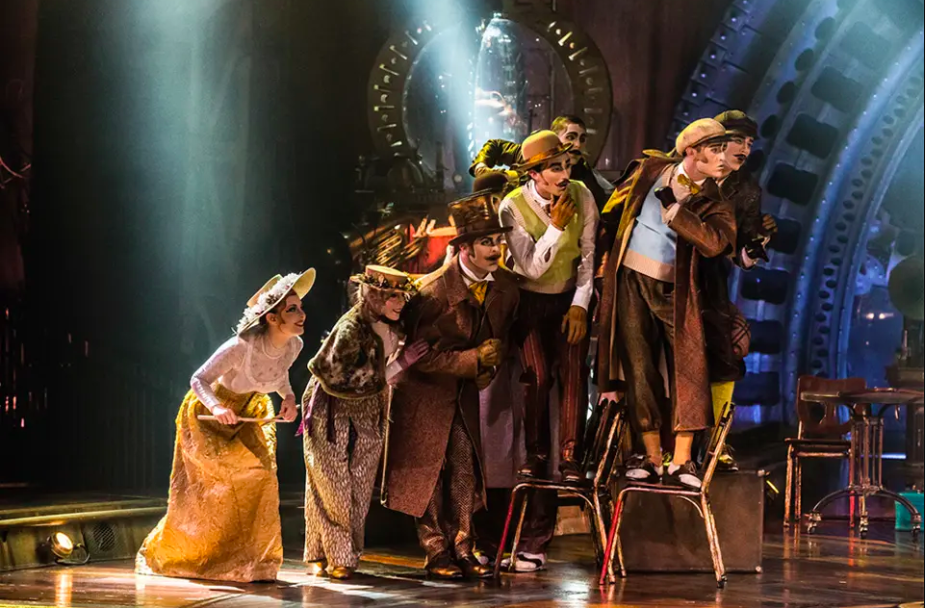 In one of Kurios’ other unusual acts, Nico Baixus’ Theater of Hands sees him using a video camera and performers’ hands to present a wordless story of two hands meeting. Watching them perform these sequences live while projecting them on a hot-air balloon above us, we are reminded of the magic of theatre and storytelling, no matter how simple it is, managing to be both laugh out loud funny and oddly moving when the hands leave the stage and play out the finale atop audience members’ heads. 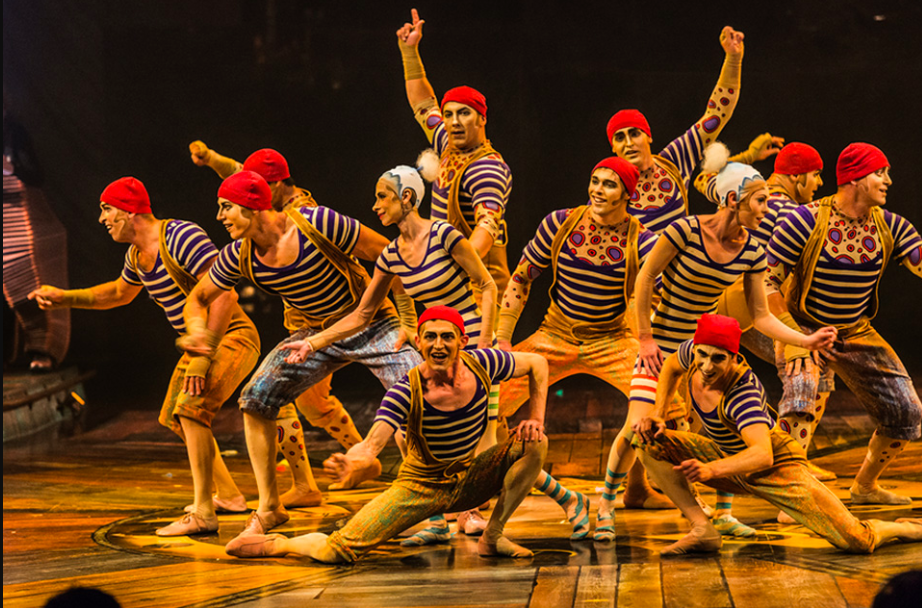 For the finale, Kurios brings back the classic Banquine act, as the 13 performers showcase their strength and coordination by literally jumping off of each other. This proved to be the perfect ending to the show, as each somersault was met with a gasp from the audience as they leapt higher and higher from one human tower to another, even crisscrossing paths at one point. Interspersed with fun choreographies in between stunts, one is left completely endeared to this motley crew of performers. 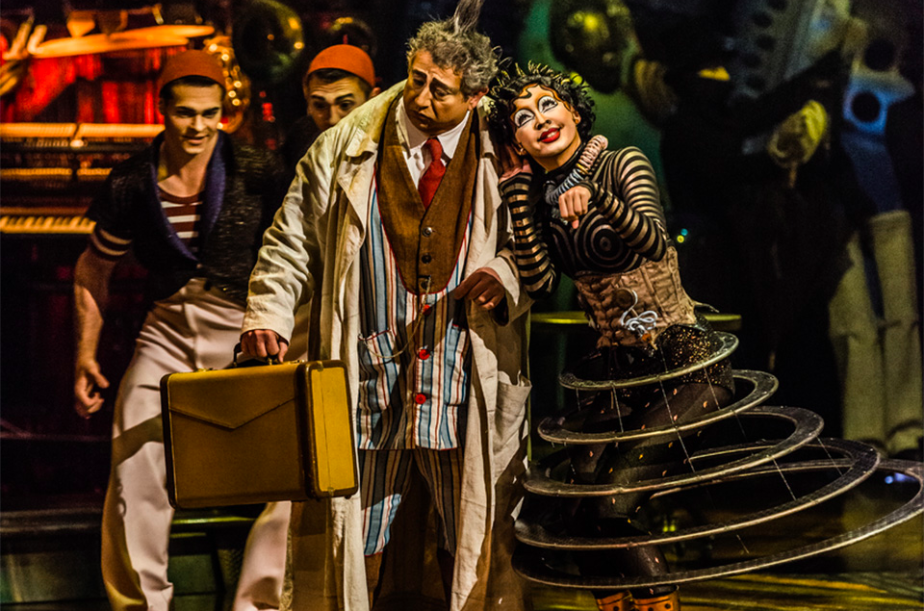 Kurios is heavily reliant on some of Cirque’s most familiar, tried and tested acts throughout the evening, but with its uniquely steampunk aesthetic and charming showmanship from its cast, it’s a twist that only serves to spark joy within any audience member.  Kurios is imaginative, wondrous, and a show perfect for anyone in need of a good pick me up, certainly a testament to how the circus remains a necessity in today’s world as it constantly, successfully reinvents itself to remain fresh each and every time.

Have we made you Kurios enough? Now, WIN yourself a pair of tickets to this amazing show! Just name us 2 acts that Kurios will be showcasing here in Singapore! Winners will be contacted via email.

Kurios: Cabinet of Curiosities comes to Singapore from 5th July to 18th August 2019 at the Big Top beside Marina Bay Sands. Tickets available from SISTIC