Obsession is a dangerous thing.

From its title alone, Killing Eve sounds like your cut and dried thriller series, with a veritable female assassin and an MI6 agent caught in a dangerous cat-and-mouse game attempting to outwit each other. But there’s good reason why this show has received as many awards and as much critical acclaim as it has. 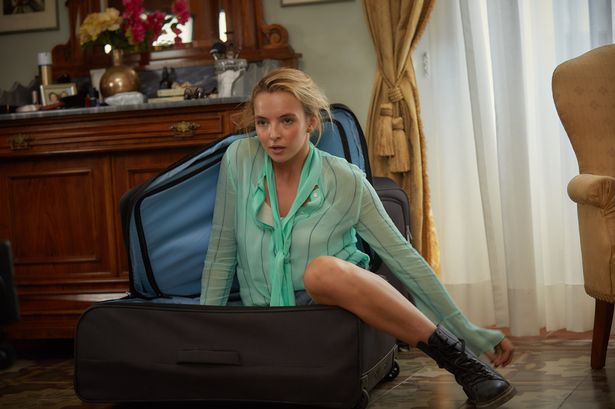 Written by Phoebe Waller-Bridge (of Fleabag fame), Killing Eve is a genre-defying series that never ceases to surprise in each new episode. In its opening scenes, we’re already introduced to our psychopathic assassin-for-hire Villanelle (Jodie Comer), as she oozes feminine mystique, playfulness and pure chaos in an iconic ice-cream scene. Later on, we see her mercilessly stab old men in the eye, or poison women with perfume. It’s disgusting, bloody, over-the-top, and quintessentially Killing Eve in all its morbid fun as we indulge in Eve’s violence with each assassination. Comer is a surprisingly good pick for the role, having previously been known for her role in E4’s My Mad, Fat Diary, and showing a keen sense of maturity and chilling instinct as she embodies the role of Villanelle completely and utterly. 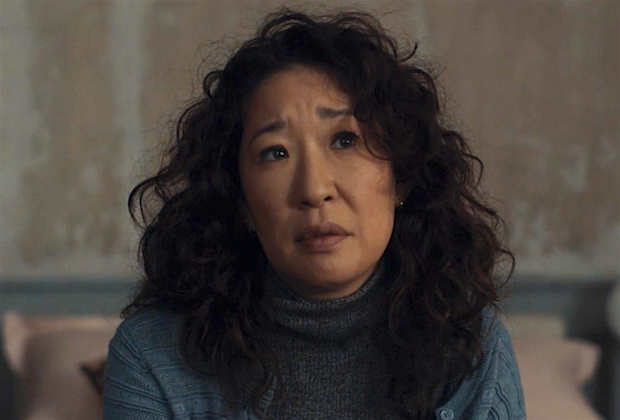 Opposite her is Eve Polastri (Sandra Oh), perhaps the most unlikely adversary to face beautiful Villanelle. Eve, by contrast, is bumbling, almost comical in her trip-ups, brash and direct. Fired from her MI5 office job, she is bestowed with the honour of joining as an MI6 agent instead, tasked to track down and stop Villanelle from proceeding down her path of blood. Yet even amidst her seeming incompetence, Eve showcases a strong knack and disturbing obsession for getting into the heads of female killers, fantasising how their brilliant minds work, or the lack of compassion they possess as they carry out each kill remorselessly. Oh shines as Eve, balancing a constantly anxious face with a determination in her decisions and actions that seals this role as one of her best ones yet, utterly flawed in character yet brilliant in her work and arresting to watch, for all her bizarre decisions that turn out just right. 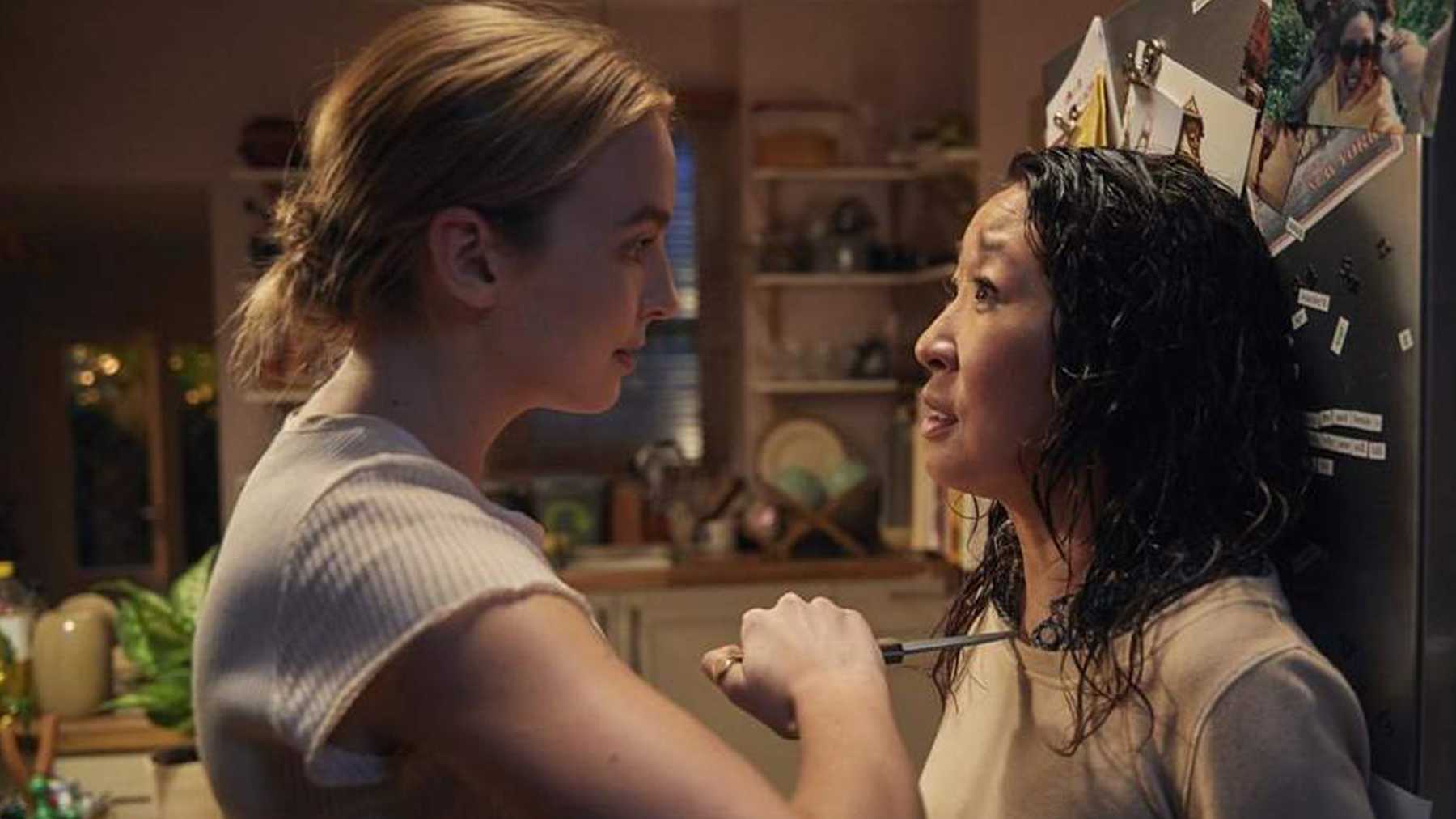 When the two finally meet, the results are electrifying, to say the least. The initial apprehension and fear displayed by Eve (along with a number of hysterical screams) quickly gives way to a never-before-seen boldness as she realises that the two can never bring themselves to kill each other, with their mutual obsession. Even at point blank range, Villanelle chooses instead to walk away, a maniacal laugh on her face as she leaves Eve speechless. For these two women, this is more than a game they’re playing – it’s a relationship they can’t let go of, simply because they’re the polar opposite of each other – Eve is the ideal of a whipsmart detective who will stop at nothing to contain the pure chaos that is Villanelle. 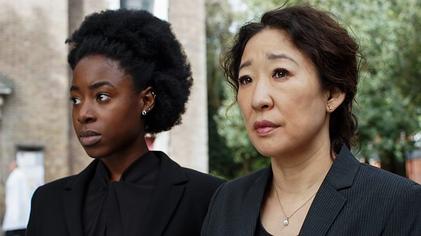 With this relationship at the core of the entire series, Killing Eve makes viewers feel just as compelled to follow these two women’s journey as much as they’re obsessed with each other. It’s difficult to pin down exactly how they feel about each other – and that in itself is part of the grand appeal of the series. As much as it isn’t sexual in nature, there is a clear underlying sexual tension between both women, a strange sisterhood and even at times, a mother-daughter relationship where Eve wants to tame and rehabilitate Villanelle, always characterised by the two women on the brink of doing violence to each other. We are constantly kept on the edge of will they, won’t they each time they meet (knowing full well they will never actually kill each other), and always hungry to see what dark twists their relationship will take next – Oh and Comer share an electrifying onscreen chemistry and tension you could cut with a knife with how far they’re willing to go for each other. 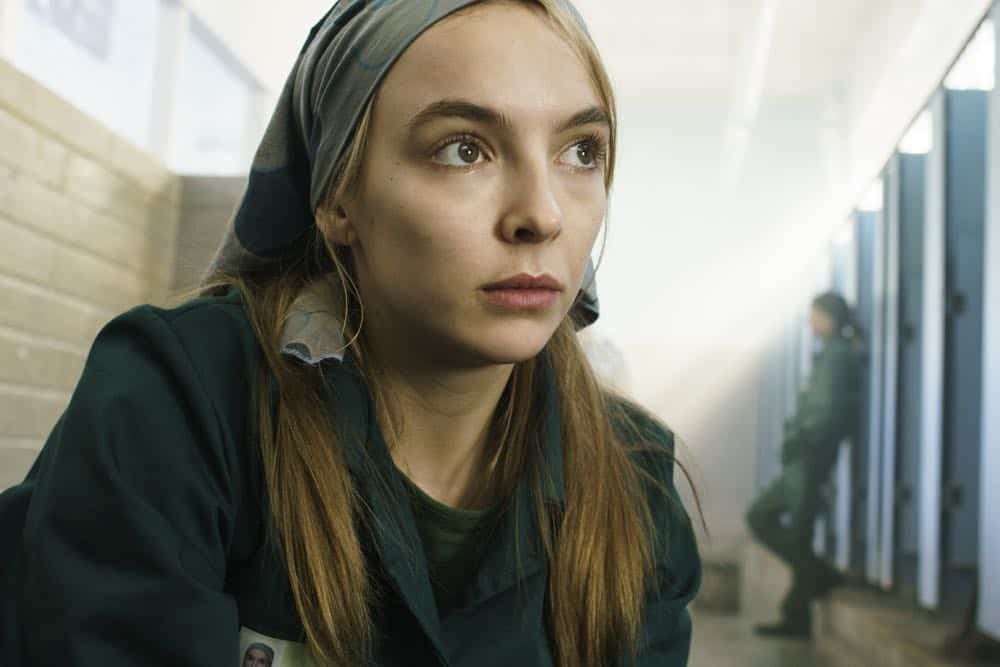 But beyond the blood and brutality, beyond the laugh out loud quips and the thrill of the chase, what Killing Eve gets so right that puts it a cut above every other serial killer series out there is just how incredibly emotive it gets. The true beauty of the series lies in how Waller-Bridge and her team has crafted a rich, absurd world whose rules fall apart piece by piece, and stops making sense when we realise nowhere is safe. Both Eve and Villanelle find themselves respectively in danger, not from each other, but from far greater forces at work, from the shady organisation Villanelle works for, to double agents within their own midst seeking their downfall. 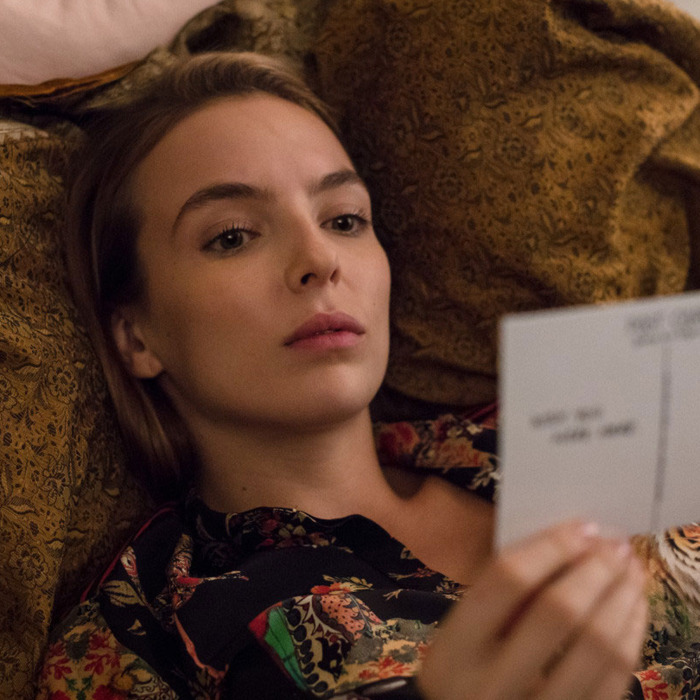 What keeps us holding on then, is the odd couple relationship between Villanelle and Eve, who find that the more they become entangled in each other’s lives, the less they are able to tear themselves away from each other. As it becomes clear that the world they live in is one without any form of conscience, it is evident that Villanelle’s greatest weakness is her ennui and lonely existence, a chink in her otherwise perfect armour that leaves her wanting for a plaything and more – one she finds in Eve. In this season, it is most fascinating to watch Villanelle goes from cold-blooded love to hate killer, to one we almost feel sympathy for as her past becomes unearthed and we learn, disturbingly, to root for this anti-heroine and her unending thirst for entertainment, like a child determined to get her way. With Eve as our eyes, we see and understand how it is that one person can be simultaneously frustrated and completely head over heels obsessed with this beautiful assassin. 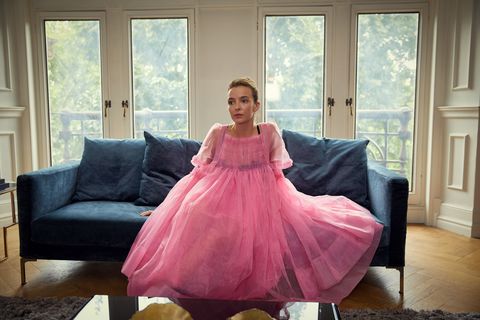 To add to the addictiveness of the show, the production design of Killing Eve is exquisite – taking us from the boroughs of London to the arrondissements of Paris and even the streets of Moscow, Killing Eve simultaneously indulges its viewers in the beauty of these cities while horrifying with the trail of blood left behind. Villanelle’s taste for expensive, chic clothing is also a delight to see as Jodie Comer dons branded goods and looks fresh off the runway each time she appears, along with the picture perfect cinematography we witness in each episode. Often, these have a wicked humour attached to them, such as a scene where a victim’s penis is chopped off (with copious amount of blood) abruptly cutting to a shot of Villanelle frying up sausages – it’s hard to decide if we want to throw up or laugh at the sheer amount of fun the creative team is having in editing each episode. 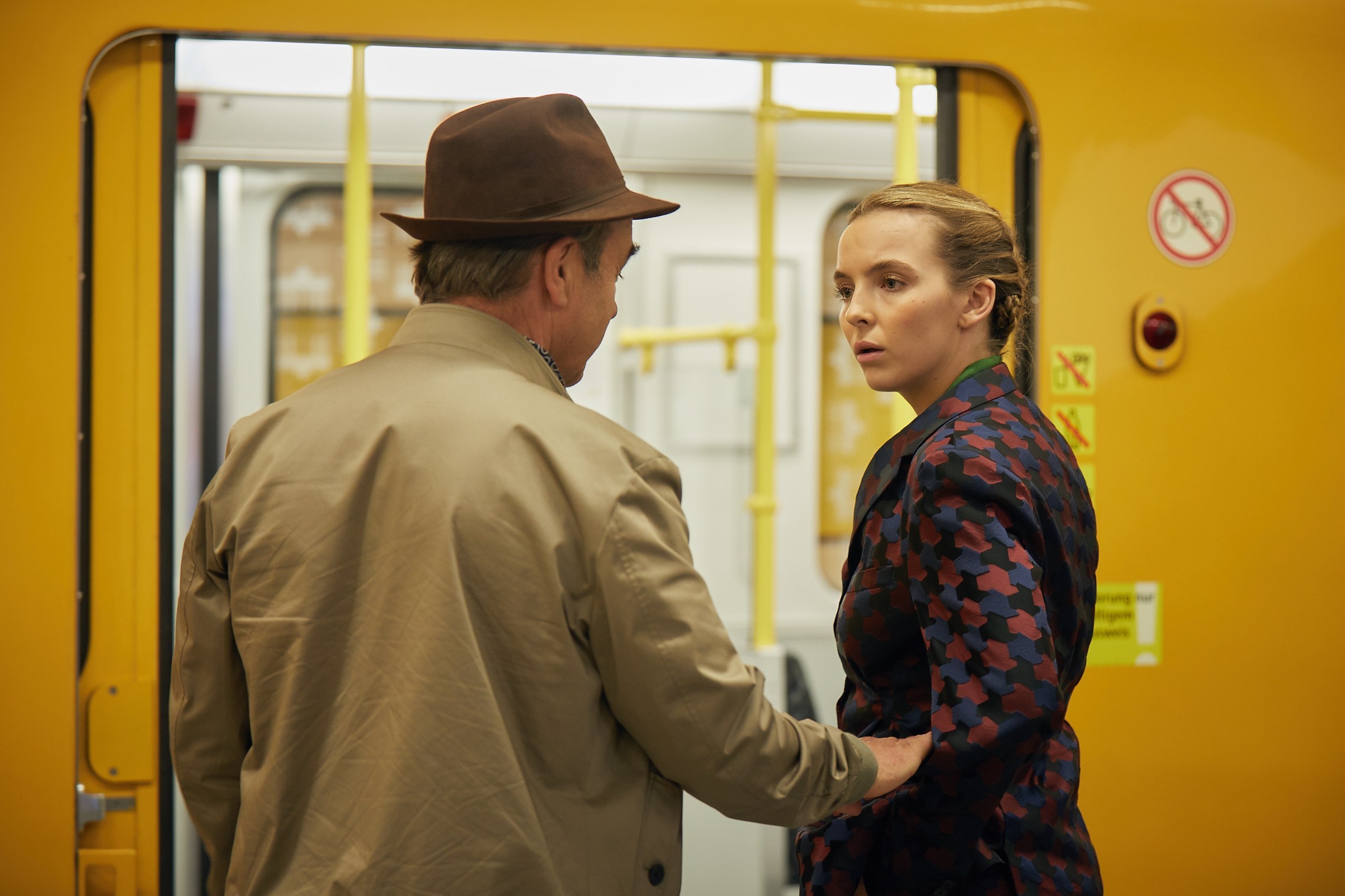 The supporting cast is brilliant as well, with Fiona Shaw as the mysterious MI6 bigshot Carolyn Martens cutting an imposing figure, along with the all too likeable David Haig as a fellow MI5-turned-MI6 agent Bill Pargrave, Kirby Howell-Baptiste as Eve’s sassy assistant Elena, and Sean Delaney as MI6 hacker and IT whiz Kenny. As Villanelle’s handler, Kim Bodnia is perhaps one of the most fascinating side characters to be introduced, constantly switching sides and with his own mysterious past, deadly in his own right. When watching, one shouldn’t get too attached to any of the supporting cast, because far too often, a grisly assassination or twisted betrayal is waiting just around the corner for almost every one of them. 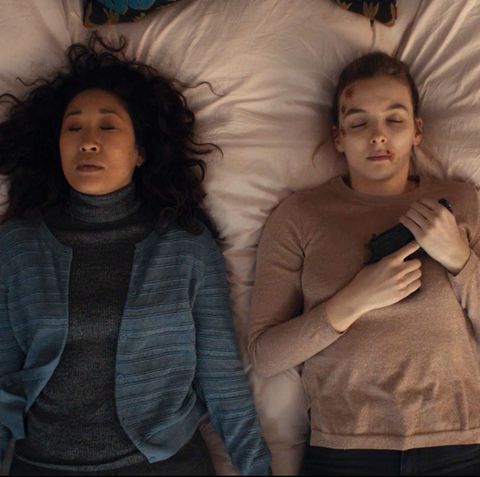 What Killing Eve results in then, is a perfectly paced meditation on murder, one that questions the act and even its supposed immorality. If a person is so terrible that he is above the law, should we then allow for him to die to make the world a better place, particularly in a world whose rulebook is thrown out the window? How do we find comfort and companionship in such a world, where we find the absurd humour in the smallest of objects and learn to embrace the fear that comes with living? Defying convention, featuring incredibly smart writing, and daring to create its own warped mythos and philosophy that keeps us on the edge of our seats with every episode, Killing Eve is the addictive, thrilling, bloody series that gets you excited about prestige television again, and an absolute must-watch as the best of the best in this golden age of television.