Blurring the lines of good and evil as Killing Eve dives ever deeper into the complicated relationship between Eve and Villanelle.

In the finale of Killing Eve Season 1, viewers were left shocked as MI6 agent Eve Polastri (Sandra Oh) delivered a near-fatal wound to beautiful assassin Villanelle (Jodie Comer), in a shocker that cemented the series as one of the most exciting new shows on television. With Emerald Fennell taking over the reins in Season 2, how then would the creative team keep up the frenetic energy and high tension that Season 1 showrunner Phoebe Waller-Bridge had already set-up and left viewers thirsting for more? 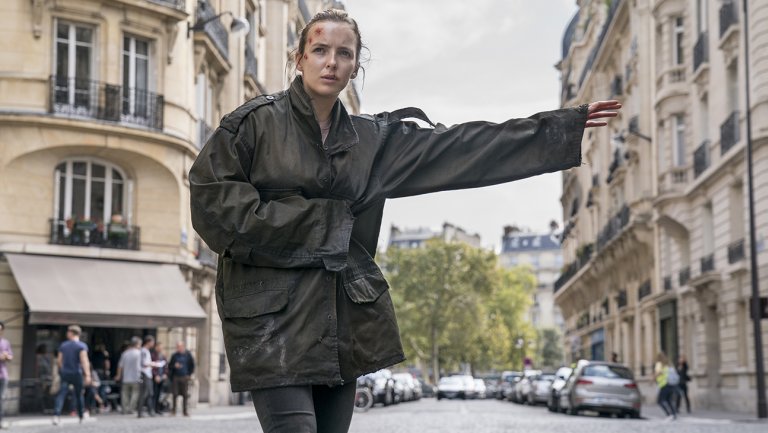 As it turns out, Season 2 picks up exactly where Season 1 ended, and brings with it even more risky cross-country missions, greater threats to both women’s lives, and their mutual obsession beginning to have a visible effect on each other. Once again, Eve and Villanelle’s tenuous relationship forms the core part of Killing Eve’s draw, going from archenemies to mutual admirers to even what can be considered a strange sisterhood. 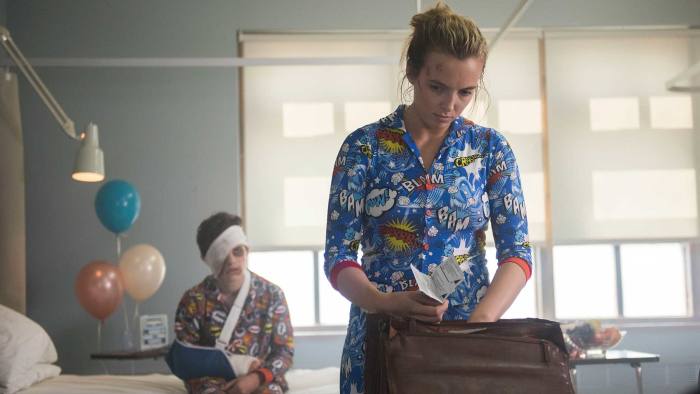 One of the biggest questions viewers were left with at the end of Season 1 was how Villanelle would recover, which Season 2 effectively wraps up within its first episode. Suffice to say, in true Villanelle style, it’s a solution that involves dramatics, murder, surprisingly colourful hospital-wear, and a clever escape involving a wheelchair and a cheeky LOL. This season unarguably places the spotlight on Jodie Comer, pushing her acting even further than Season 1 did, as she plays with her Russian accent, her natural English accent and towards the end, a believable Brooklyn accent. Never does Comer fall prey to simply being an accent though, and she effectively acts through it with her chameleon-like ability to shift from one persona to another. 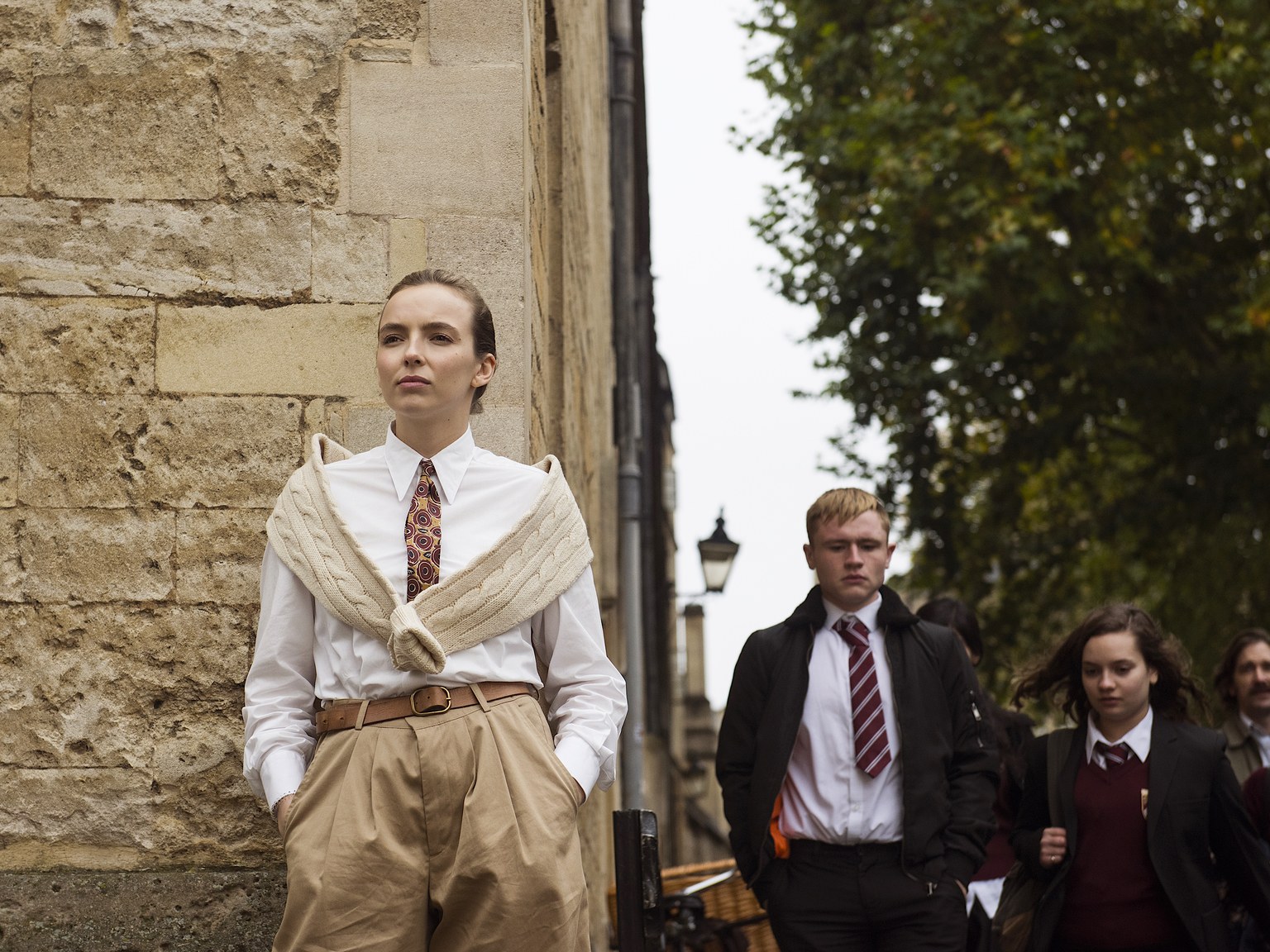 Season 2 in particular introduces a number of particularly dangerous villains to Villanelle’s rogues gallery, including brand new handler Raymond (Adrian Scarborough, incredibly foreboding in every scene), along with other unhinged men such as the seemingly kind Julian (Julian Barratt) and an assortment of henchmen from the Twelve. In a sense then, the second season of Killing Eve makes its intent as a feminist show incredibly clear, as Villanelle finds herself a damsel in distress time and again, only to claw her way out using only her own wits, skills and thirst for bloody revenge. As with the previous season, Villanelle’s wardrobe itself remains a star of the show, and one cannot wait to see what fancy new clothes she’ll don in each episode. 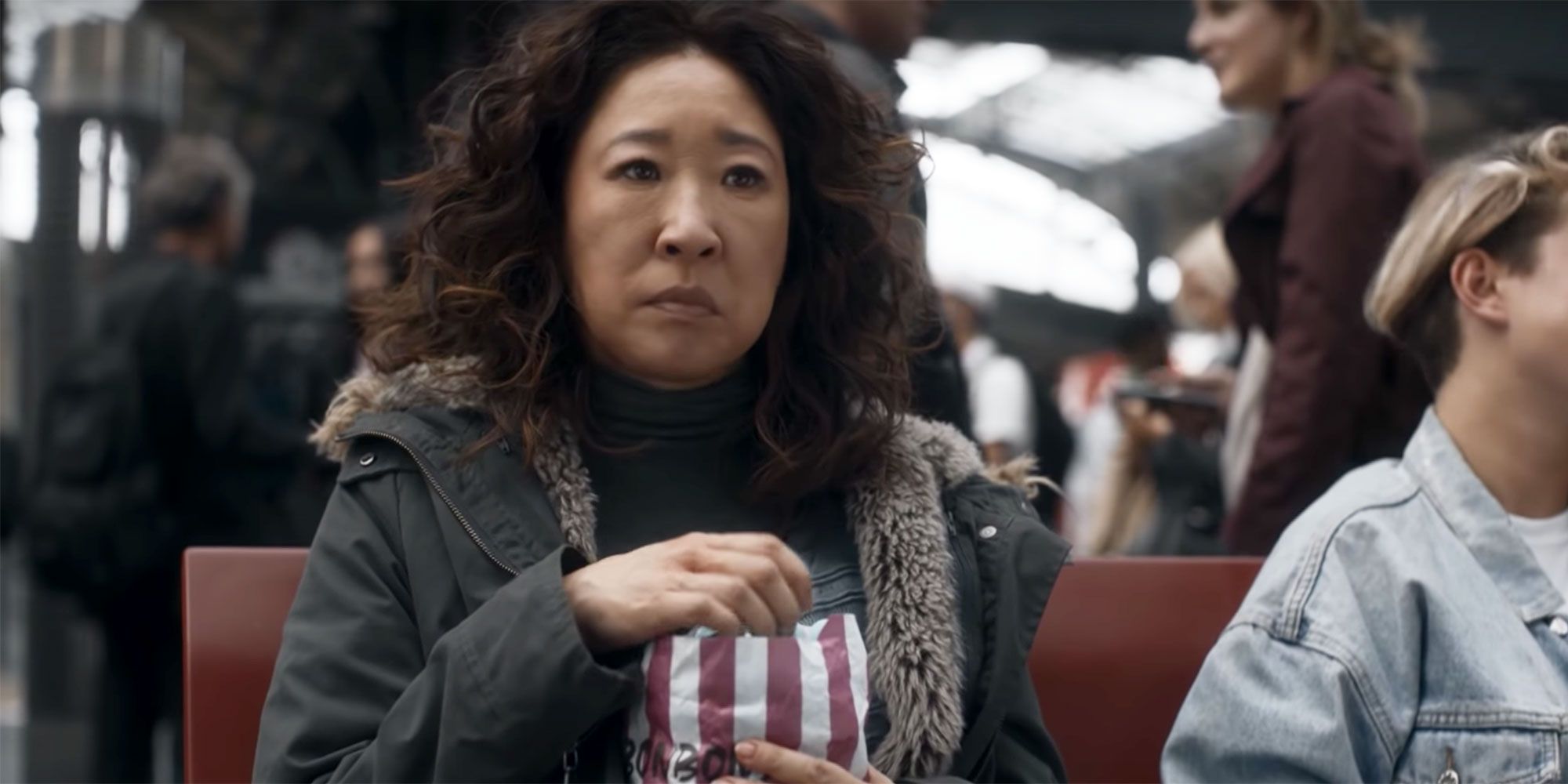 Even as Comer shines bright, that’s not to say Sandra Oh as Eve doesn’t get any attention. In fact, while Villanelle gets most of the action in Season 2, Eve’s storyline is the one that receives far more narrative development, as the show delves into her obsession that borders on dangerous, with Oh delivering screengrab worthy expressions in each scene as Eve undergoes severe psychological trauma. Midway through the season MI6 does the unthinkable – recruiting Villanelle herself to help Eve work on a case involving a new serial killer, and the collaboration that results from it only sends Eve spiralling further down a dark rabbit hole as she finds herself taking increasingly bold risks and teetering on the edge of psychopathy herself with the stress from the job. Already in the first episode, as Eve flees Paris in the wake of attacking Villanelle, her nervous, guilty tics cause her to be mistaken for a drug addict, one that sends her into fits of laughter. 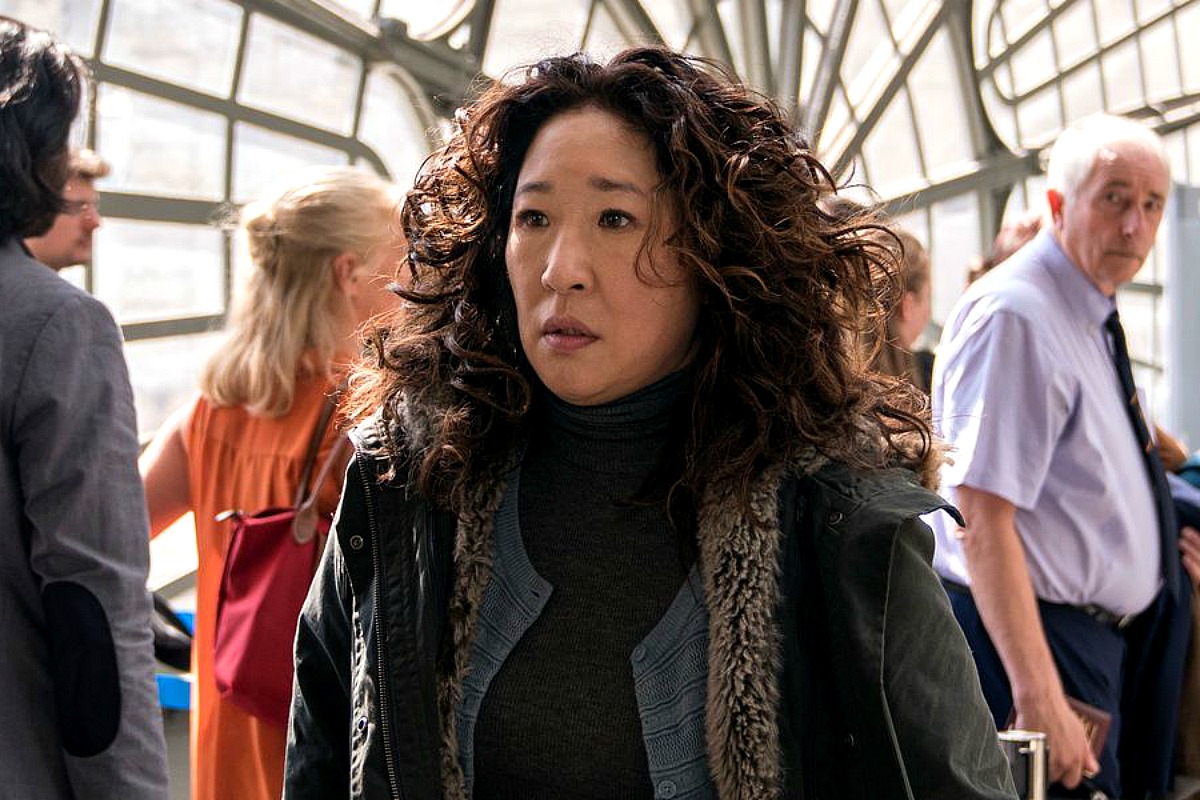 All of this comes to a head in the season’s denouement, which takes both Eve and Villanelle to Rome on yet another clandestine mission, as they attempt to gather evidence against tech heir and surveillance obsessive Aaron Peel (Henry Lloyd-Hughes), himself hiding some pretty dark secrets. It is on this mission that Eve and Villanelle each realise how much they have entwined themselves into each other’s psyche, allowing the other to get under their skin whether sleeping or waking, and how each one desperately, insanely craves what the other provides. 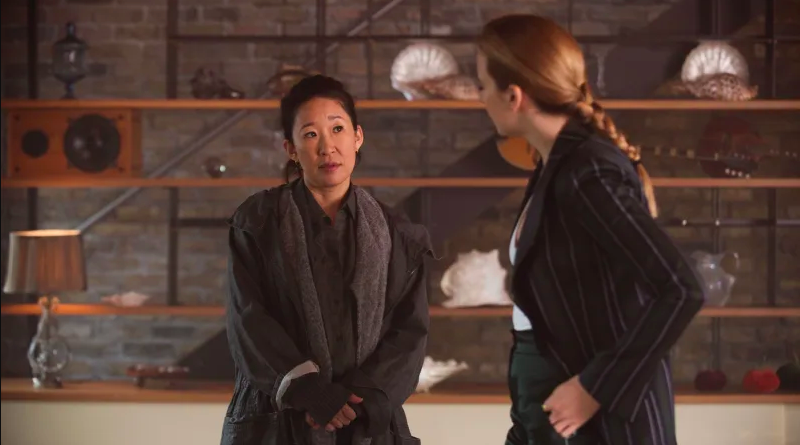 The body count this season continues to rise, and with it, increasingly gruesome murders. It’s hard to imagine how Killing Eve will continue to outdo itself with ever bloodier, ever more inventive kills that shock for shock’s sake, but it somehow managers to in each subsequent episode, be it due to choice of weapon, or pure violence exacted in each scene. The wicked humour we loved so much of in Season 1 is still present, though to a lesser degree, but continues to leave us unable to help laughing out loud even in the most gruesome of scenes with the series’ mastery over dark, absurd humour. 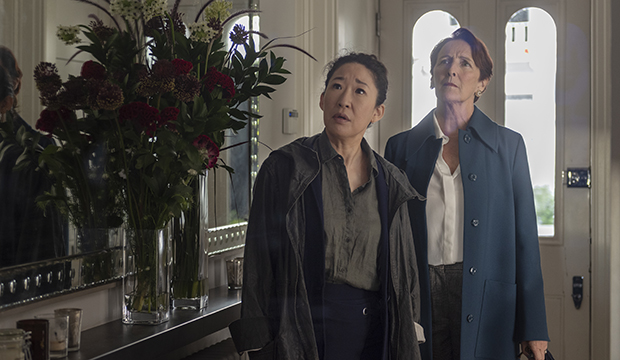 With MI6 also shifting headquarters, Season 2 introduces a host of new characters to settle in with – characters we certainly also fear for as they get involved with Villanelle’s affairs. In MI6, there’s brilliant Intelligence Officer Jess (Nina Sosanya), along with the unquestionably dickish agent Hugo (Edward Bluemel, in a love-to-hate role), and seemingly bumbling psychopath specialist Martin (Adeel Akhtar, who plays double agent exceedingly well). Hacker Kenny (Sean Delaney) unfortunately takes a backseat this season, while Eve’s poor husband Niko (Owen McDonell) just can’t catch a break at all, acting more as a romantic rival to Villanelle than having his own storyline, and subject to her cruel games. 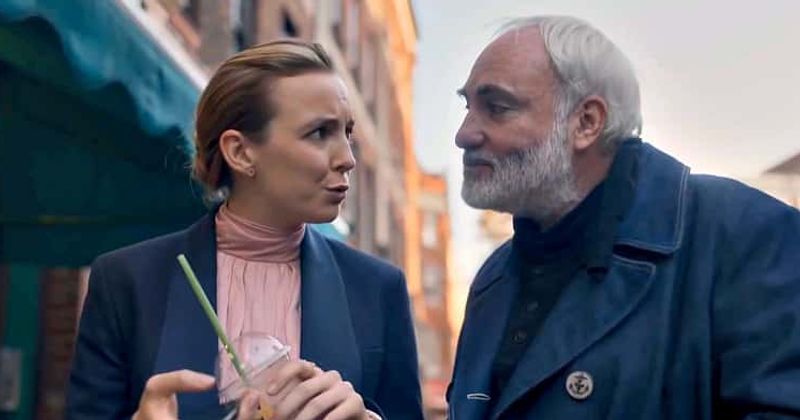 But of the supporting cast, it is both Fiona Shaw as Carolyn Mathers and Kim Bodnia as Konstantin that come back in full force, their characters each delivering more of the mystery they raised in Season 1 as they continue to harbour unknown intents and allegiances with greater forces. Unfortunately for viewers, Season 2 reveals almost nothing new about the shady Twelve, certainly a big reveal we hope will come sooner rather than later as Eve and Villanelle uncover more clues to the truth behind the organisation they chased so hard in Season 1. 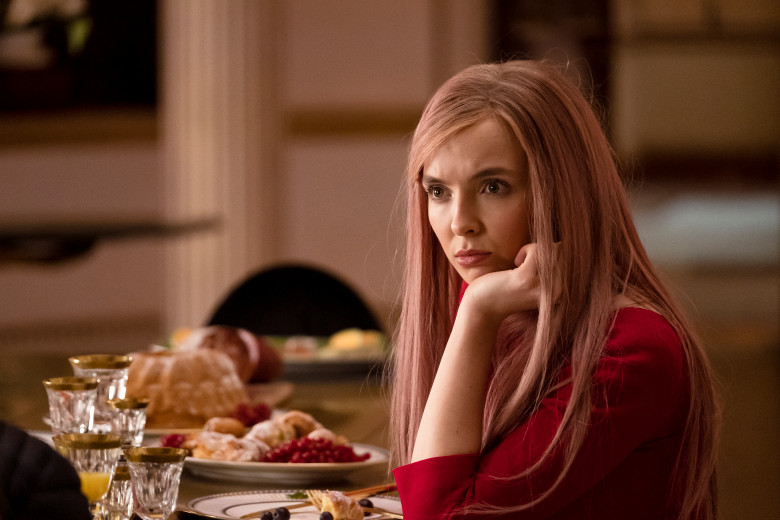 By the time we get to the end of Season 2, the already complicated relationship between the two women is further confused, with little hint as to who truly is in charge when they collaborate – Eve’s initially brave front is quickly dissolved when Villanelle reveals a ruse, and both women are tripped up when they discover the entire mission has secret goals far beyond their knowledge. Just when it seems the two are about to do a Thelma and Louise and leave the world as they know it behind, we seemingly return to the situation we faced in the Season 1 finale, as their loyalties and trust are once again thrust into the unknown from self-doubt and worldly ties, and the two once again veer into ‘will they, won’t they’ territory that sets up for more development in Season 3. 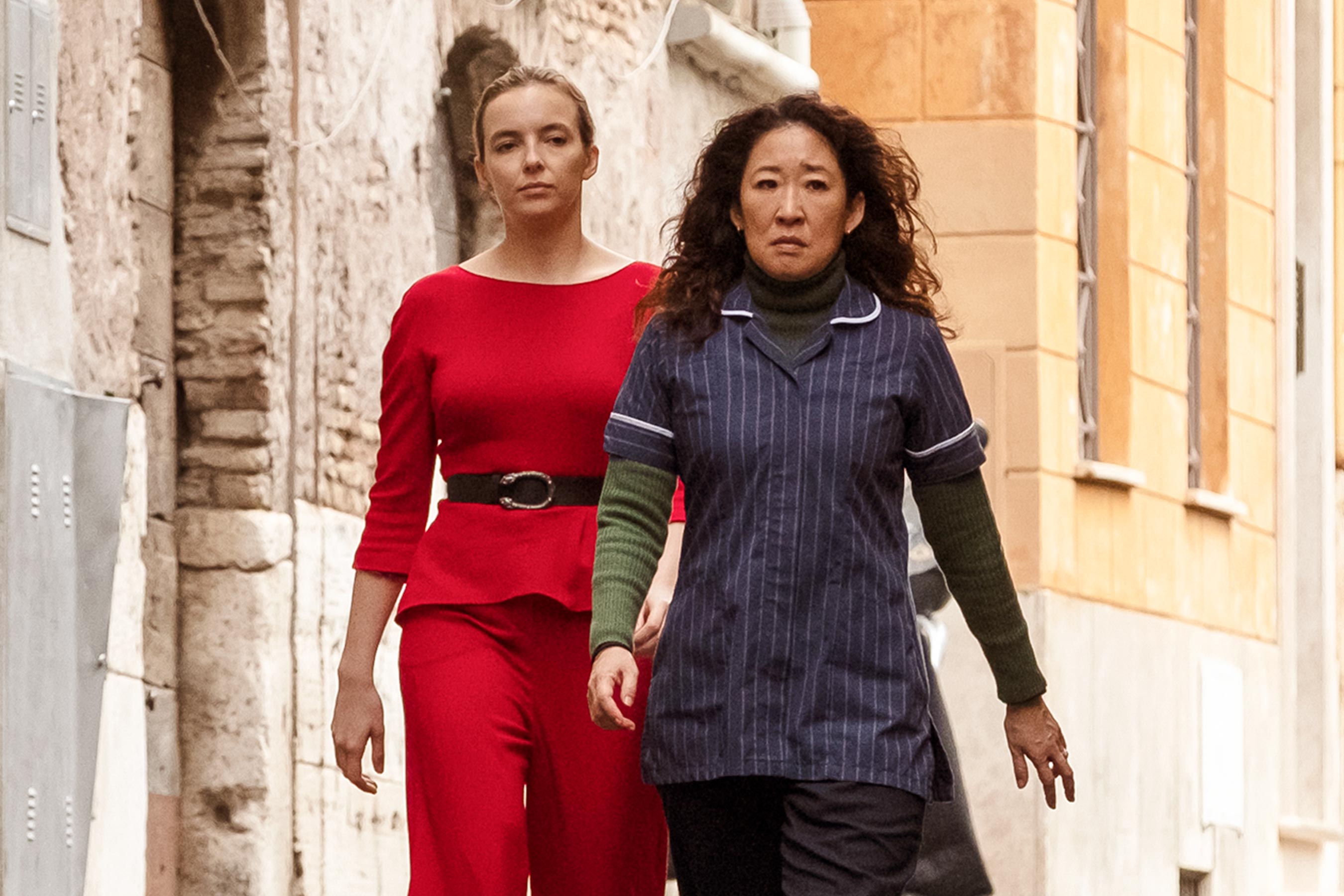 Killing Eve Season 2 isn’t quite as tight as Season 1, but nonetheless delivers on high energy thrills and an ever-fresh plot that strings us along as we yearn for the unravelling of this mystery. The initial adrenaline rush of the cat-and-mouse is gone, but what Killing Eve now offers is far more psychological fare that dares us to gaze into the abyss of human nature and fear the result when it gazes back, as we wonder what depths each woman will sink to as they face down each other, and the increasingly traitorous world around them. Once again leaving us on a precarious cliffhanger, Killing Eve Season 2 still has us wanting more of its addictive plot, its startling originality, and always, more of the fantastic performances from the cast and cinematography from the crew. If you questioned whether the series could keep up with the expectations set by Season 1, then you have nothing to fear, as we eagerly wolfed it all down, and now wait with bated breath for Season 3 come 2020.

Catch the premiere of Killing Eve S2 on Friday, 16th August 2019. Available on BBC First (StarHub Channel 502) and BBC Player. Killing Eve S1 is available in its entirety on the BBC Player.