Come on down for a weekend of independent theatre as Centre 42’s annual Late-Night Texting returns this August! Held in conjunction with the Singapore Night Festival, this year’s programme features a bumper crop of work, with over 25 bite-sized theatre performances, with admission entirely FREE over two nights.

Says Centre 42 Company Manager Ms. Ma Yanling: “Late-Night Texting has always showcased exciting new writing and a wide range of short-form performance formats from next-generation theatre-makers. This year is especially exciting because many of the presenting artists are shining a spotlight on invisible narratives and issues close to their hearts. While international acts might draw big crowds, we believe Late-Night Texting will treat audiences to daring, diverse and very relatable works made right here in Singapore.”

Come catch a selection of 10-minute plays focusing on the Singaporean Indian identity, Indian families and narratives in Kitchen Masala, the debut collection of new works by Brown Voices, Singapore’s first Indian theatre collective. Says founding member Grace Kalaiselvi: “The Indian voice is missing. In a lot of plays, you’ll see the Chinese culture and Malay culture in it, but never the Indian culture. So how else can [Indian culture] be represented if we don’t write it ourselves?”

Under Room To Breathe, Centre 42 will be presenting dramatised readings from two of the playwrights under their Boiler Room programme. Zee Wong ’s The Women Before Me presents the story of two women, four hundred years apart, connected by art and sexual violence. Says Zee: “I wrote “The Women Before Me” because of how perturbed I was by the pervasiveness — and to a certain extent, normalisation — of violence against women in Singapore, and around the world. Seeing the groundswell about these issues made me feel like it was okay to speak up, to question, to be angry about the way things were.”

Meanwhile, Room to Breathe will also feature Tan Liting’s Pretty Butch x 不男不女, which first premiered at the M1 Singapore Fringe Festival in 2017 and has since gone on to the 2018 Taiwan International Festival of Arts in Mandarin. At Late-Night Texting, check out the Singapore premiere of the Mandarin version of the script.

After debuting at the 2018 M1 Singapore Fringe Festival, local collective ATTEMPTS is back to shake up the local dating game with Dating Sim (Beta), a participatory theatrical experience that takes the form of an interactive dating simulation game come to life, allowing the audience a closer examination of modern dating and relationships. Says Rei Poh, Director and Facilitator of ATTEMPTS: “Having a resource like Centre 42 is important for independent artists like me, as they built a relationship with me and allowed me to develop my work. Beyond having a space to work, they’ve built a community where we can interact with fellow artists in the same space and do more experimental work.”

Main Tulis Group and Pink Gajah Theatre will be collaborating on Verso/Recto, taking over the front courtyard of Centre 42 as each group responds to poetry by Southeast Asian writers as curated by BooksActually, namely, Ko Ko Thett’s (Myanmar) A Few Ways to Eat the City Raw, Lee Jing Jing’s (Singapore) The Spirit Catches You and You Fall Down, and Mong-Lan’s (Vietnam) From Argentine Tango: Observations While Dancing (Part 6). Over the 30-minute performance, both groups will be using their own distinctive performative styles that blend text, music and movement.

Fans of Singaporean theatre classics can also enjoy seeing crowd favourites like Stella Kon’s Emily of Emerald Hill, Tan Tarn How’s Undercover and Robert Yeo’s One Year Back Home make a return at the festival…but with a twist. Enter @thisisemeraldgirl, Understudy and Gossip GRLs, fresh takes, responses and reinterpretations of the works, and all of which were previously presented in Centre 42’s The Vault series.

Plus, BooksActually returns with their pop-up store The World’s Loneliest Bookstore, this time with a focus on Singapore and Southeast Asian texts. Hear from the bookstore’s owner herself in a late-night story-telling session, about her journey as one of the 4,169 survivors left on earth after the freak solar flare decimated Earth’s population. Coffee Bandits will also be making a comeback as they spice up the atmosphere with caffeine and bites. 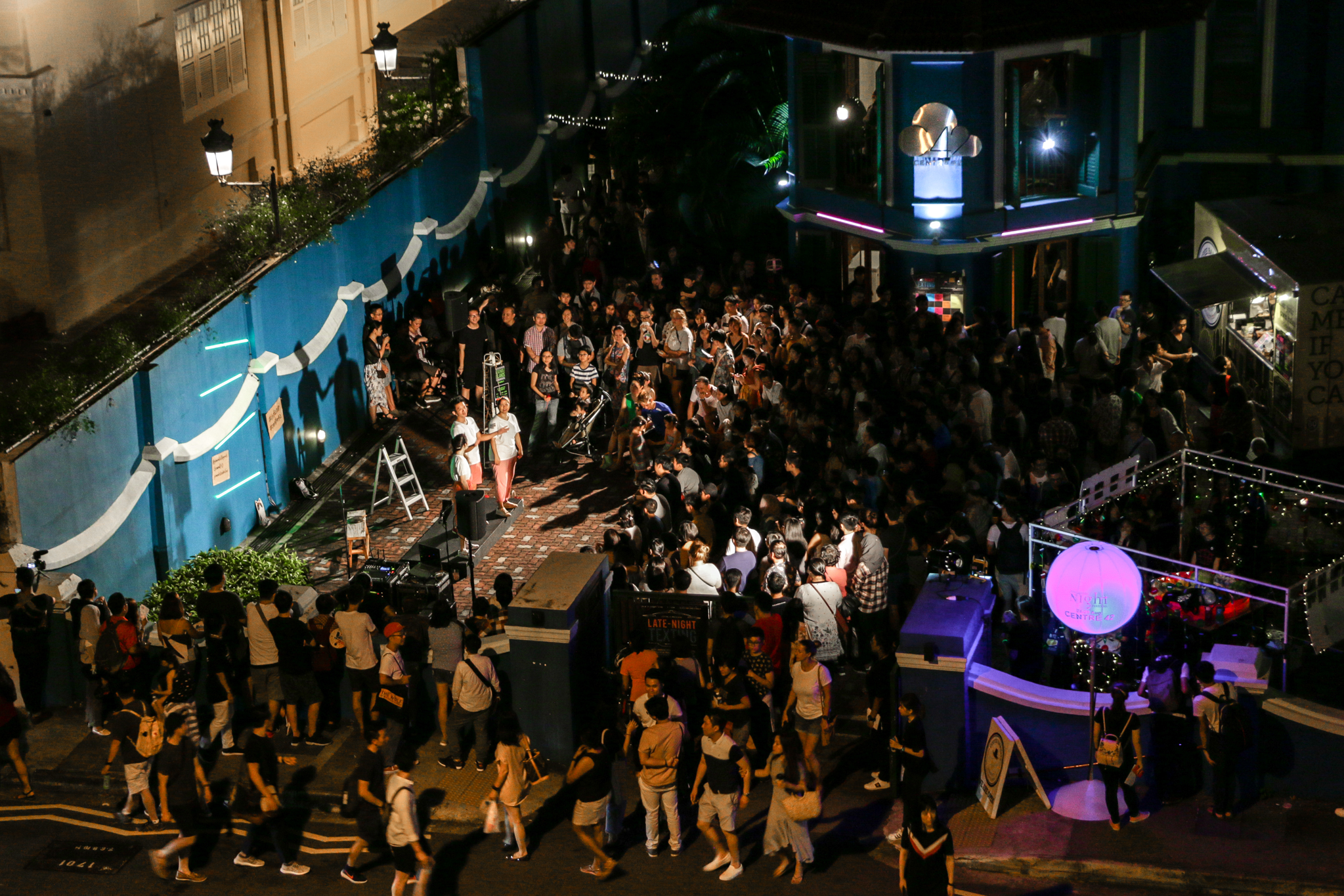 With over 14,000 people in attendance over the last three editions, the new edition of Late-Night Texting this August is set to be yet another brilliant celebration of independent Singapore theatre under the stars, one that will leave you confident and excited about the local theatre scene.

Late-Night Texting runs from 30th to 31st August 2019 at Centre 42 as part of the 2019 Singapore Night Festival. Admission is free. For more information, visit their website here