Remembering those we’ve forgotten via two tales of the dispossessed.

As much as the Bicentennial celebrations claim to remember the some 700 years of recorded history of Singapore and the people who lived here back then, it tends to forget that those same people aren’t extinct, and in fact, still walk among us today. With Drama Box’s incredibly ambitious two part play Tanah•Air 水•土 then, the local theatre company seeks to shed light on these figures we’ve left by the wayside, reminding us of the history and lives of the Orang Laut. 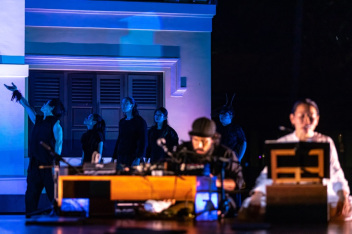 Individually, the elements that make up Tanah are incredibly strong. Hai Bin’s Mandarin script is poetic, evocative and dramatic, one we would have loved to enjoy on its own simply sitting there, our attention rapt as we hang on to every word, from poems to rich descriptions. Tanah takes the form of an epic drama, following the young Marmah, a child of the sea as she comes ashore to Singapore, while the British and Malay Royal Family vie for sovereignty over the land. What follows is a sprawling tale of political intrigue, infighting and betrayal, with countless characters from saints to princesses introduced while weaving in familiar legends and history, such as the swordfish attack on Singapore and the blasting of the Singapore Stone. 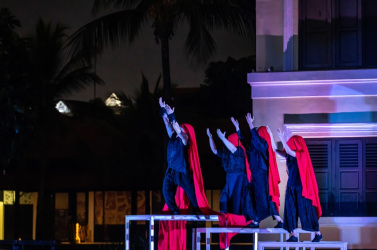 Meanwhile, Koh Wan Ching’s direction proves that she remains at the top of the game when it comes to physical theatre, with the cast of six making full use of the unique outdoor setting, stamping their feet on concrete drain covers like a drum and scaling the pillars of the heritage centre, playing with distance and the natural environment throughout. We see elements of breakdance brought into the mix (from contemporary dancer Jereh Leung), silat that has actors kicking their legs up high, and the use of props such as a giant bamboo pole and lengths of red cloth. A step-like platform is deconstructed to form a wall, the cast splash each other with water from clay pots, and an impossible to miss wedding procession even arrives in grand fashion. You never want to take your eyes off any of the action before you, as the actors showcase artful discipline, precision and control in every action and movement to form each shape that reverberates with something deep within us, always in sync and displaying a keen understanding of each other.

Tying both these elements together is Bani Haykal’s live music, taking us back to a far simpler time, evoking the tropics and ancient wisdom through his melodies, one of the most intentional, essential examples of sound design integral to the success of a production we’ve seen. There is something almost supernatural that seems to possess this production, primal and powerful, supported by Lim Woan Wen’s almost mystical lighting, and Max Tan’s all-black, ritualistic costumes, with a fan of feathers, antlers and antennae protruding from actors’ shoulders, while lengths of red cloth allow the cast to transform into bloody, spectral creatures. In the distance, we hear the roll of thunder and the winds whipping up around us to flip the pages of the books arranged onstage, as if this show has unintentionally called upon something beyond mortal knowledge.

It’s a shame then that all of these elements, put together, end up competing for attention rather than working together as a single work, greatly diminishing the overall quality of the piece. It is incredibly difficult to focus on the entirety of the dense story while also appreciating the movement before us, often forcing us to multi-task and losing the essence of either aspect of the performance. Tanah is a beautifully wrought tragedy of the loss of identity, land and people, sensual and affecting, but requires a structural rework to allow it to shine as a single cohesive whole.

In the intermission that follows, audience members are requested to move over to the auditorium, where the second part of the performance is set to take place. Outside, we are encouraged to read up more about the Orang Asli in an informative exhibition, and specifically, the Orang Asli Seletar, as a way to prepare and settle us into the right mindset before the second part of the performance – Zulfadli ‘Big’ Rashid’s Malay verbatim play Air (‘water’). Co-directed by Heng Leun and Adib Kosnan, cast members Roslan Kemat, Farez Najid, Suhaili Safari and Dalifah Shahril come together to portray a group of Orang Seletar Drama Box interviewed, as they speak of their lives today living on the outskirts of society, and their struggles. 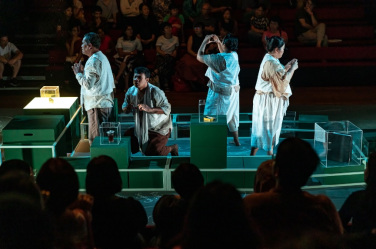 Set in Kampung Sungai Temon, an Orang Seletar village in Johor visible from Singapore, Akbar Syadiq’s set design sees a number of cubes painted green, arranged like a boat in the middle of the stage. Amidst these cubes are various clear boxes of tools and paraphernalia, from a cup of black teh to a fishing net, almost like artefacts on display, bringing to mind how the Orange Seletar used to literally live their entire lives as nomads, travelling from place to place while living out of a boat, but are now the stuff of history museums. The ‘boat’ is situated on a surface where a chalk map has been drawn out, pointing out the various locales in the region, from Jurong Island to the village itself, while twin screens at either end of the stage display black and white photos of the Orang Seletar, all of this coming together to create the semblance of being in the village itself, listening to these people speak directly to us, in the intimacy of the space.

We are introduced to a medley of Orang Seletar, each revealing increasingly distinct characters as we listen to their stories. Over the course of the play, even if we knew nothing about the Orang Seletar beforehand, we’re essentially given a firsthand lesson about their lives as seafarers, their customs of magic and spiritual beliefs, the unique dialect they use that’s distinct from Bahasa Melayu, and even the act of giving birth in a boat. The accounts selected are sincere, real and comprise a good balance of information and the personal, all told through often entertaining if not heartfelt renditions from each actor. 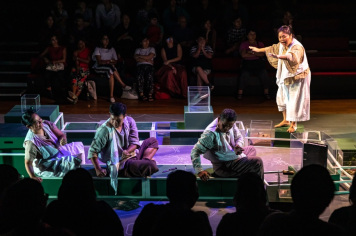 Each of the cast members display strong work in both voice and physicality, capturing the essence of their respective characters. Suhaili Safari, surprisingly, manages to portray a cantankerous old man, while Roslan Kemat is curiously entrancing as an Orang Seletar who takes up an interest in hobby photography, capturing the daily lives of his people via the camera. Farez Najid plays a younger man, full of energy and rage as he expresses frustration and fear at the disruption of their lives, while Dalifah Shahril shines brightest in her role as a believer in the supernatural, speaking with total belief in enchanted oils for midwifery and her unexpected faith in Jesus. There is excruciating pain she evokes over the loss of her child, and a sense of disorientation and disillusionment felt for the rest of the play, with a bloodcurdling scream of childbirth being perhaps one of her most iconic moments in the entire play. Together, they form a believable kampung of villagers, close-knit and understanding each other completely.

By the time we reach the midway point of the performance, it feels as if we’ve known these characters our entire lives, endeared to them and wanting only the best. When they begin to speak of the more recent legislations against them, recognising them as Orang Asli yet severely limiting their rights, we cannot help but feel a sense of injustice and anger on their behalf at the way they have been treated. Essentially innocents who have led their own lives outside of authority since time immemorial, we feel their unfair treatment at being forced to uproot and settle into their current kampungs, unable to request for more land due to their lack of money and education. 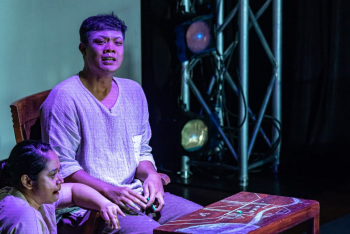 We end the performance on an incredibly emotional note as a slideshow of photos capturing the Orang Seletar’s lives begin to play onscreen, exploring the mangroves or leaping delightedly into the water. We see an image of Singapore as seen from the kampung, the sun setting over it in the distance, their former home in the waters of Seletar so near yet so far. The cast feels defeated, a rage that boils within them, yet knowing they are effectively powerless to do anything about it, but settle into their new lives, struggling to hold on to their old lifestyles in a world that chooses not to accommodate it and move on without them. Air then,results in a gripping piece of verbatim theatre done right, allowing us to love its characters before making its intent to seek justice for the disenfranchised clear, and striking hard and fast at our emotional core.

When the words ‘Tanah’ and ‘Air’ come together, ‘Tanah Air’ then translates to ‘homeland’ in English. In each play, in seeing the lives of innocents disrupted over issues of land and ownership, our eyes are opened to the realities of displacement in a world where a safe home is becoming increasingly hard to find. Tanah•Air 水•土  then, is a Bicentennial production that chooses to ignore the successes of Singapore in favour of those we’ve forgotten, introducing us to stories we never knew about, and leaving us with heavy hearts over the dark truths lying at the edges of the celebrations, knowing that these too must be addressed and acknowledged.

1 comment on “Review: Tanah•Air 水•土 – A Play In Two Parts by Drama Box”