The 22nd edition of the Singapore Writers Festival (SWF), was officially opened at the National Gallery Singapore earlier this evening by Guest of Honour, Ms Sim Ann, Senior Minister of State, Ministry of Communications and Information & Ministry of Culture, Community and Youth.

The opening ceremony saw Ms Sim reflecting on the literary arts as an important expression of the Singaporean identity, and how the Festival continues to champion Southeast Asian literature and talent. Said Ms Sim: “The Singapore Writers Festival is the pinnacle platform in Singapore’s literary arts scene and plays an important role in developing the readership of Singapore literature. It reflects our commitment, as highlighted in Our SG Arts Plan, to nurture Singaporeans’ love for literature and strengthen their engagement of Singapore’s literary works. By cultivating deep appreciation of Singapore’s diverse literary works across languages and cultures, we can connect communities through our shared stories.” 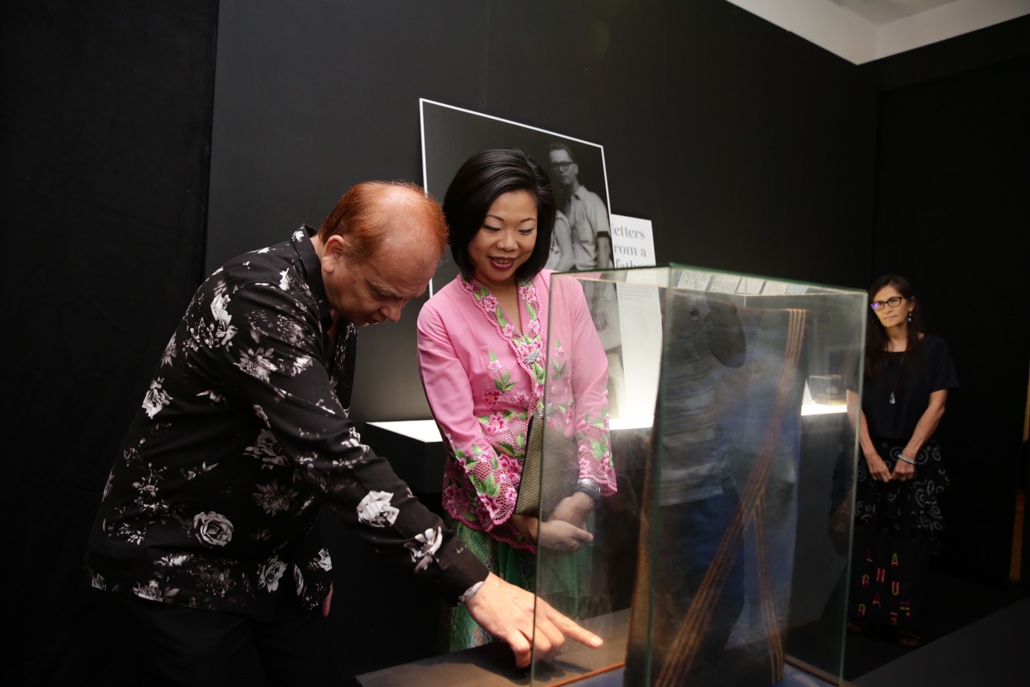 On the opening, Festival Director, Pooja Nansi comments: “The Festival team and I are pleased to present a wide-range of programmes that will allow festival-goers to spend some time thinking about who we truly are, as individuals and communities. It is our deep hope that festival-goers of all ages, language and backgrounds will find something that resonates with them across these 10 days. I hope the festival gives us all the chance to be collectively challenged to think about what it means to have a language of our own, and most importantly, what it means to encourage and celebrate difference rather than insist upon the status quo.”

Ms Sim also addressed the importance of honouring our Literary Pioneers, shining the spotlight on the late Rex Shelley, whose body of work documents the Eurasian community and culture. In collaboration with The Arts House, the Festival curated a series of programmes honouring Shelley’s legacy, including the late night programme A Bigger Party than Expected, which transformed The Arts House into a Eurasian wedding celebration inspired by Shelley’s seminal work, The Shrimp People. Across the entire night, various artists were invited to create works inspired by Shelley’s words, crafting performances inspired by his text.

This year’s edition of the late night programme saw the Arts House filled with visitors as they came to attend the ‘wedding of Bertha and Heng’, from Rex Shelley’s novel The Shrimp People. Learning from last year’s edition, which saw similarities in how multiple events were happening simultaneously across the entire venue, this year, the Arts House team were better equipped to handle crowd control. Audience members were split into distinct groups by with individual ‘itineraries’ and paths to follow for the night, which gave them priority access to programmes at specific times, helping to organise the flow of movement and ensure each time slot was not over-subscribed. 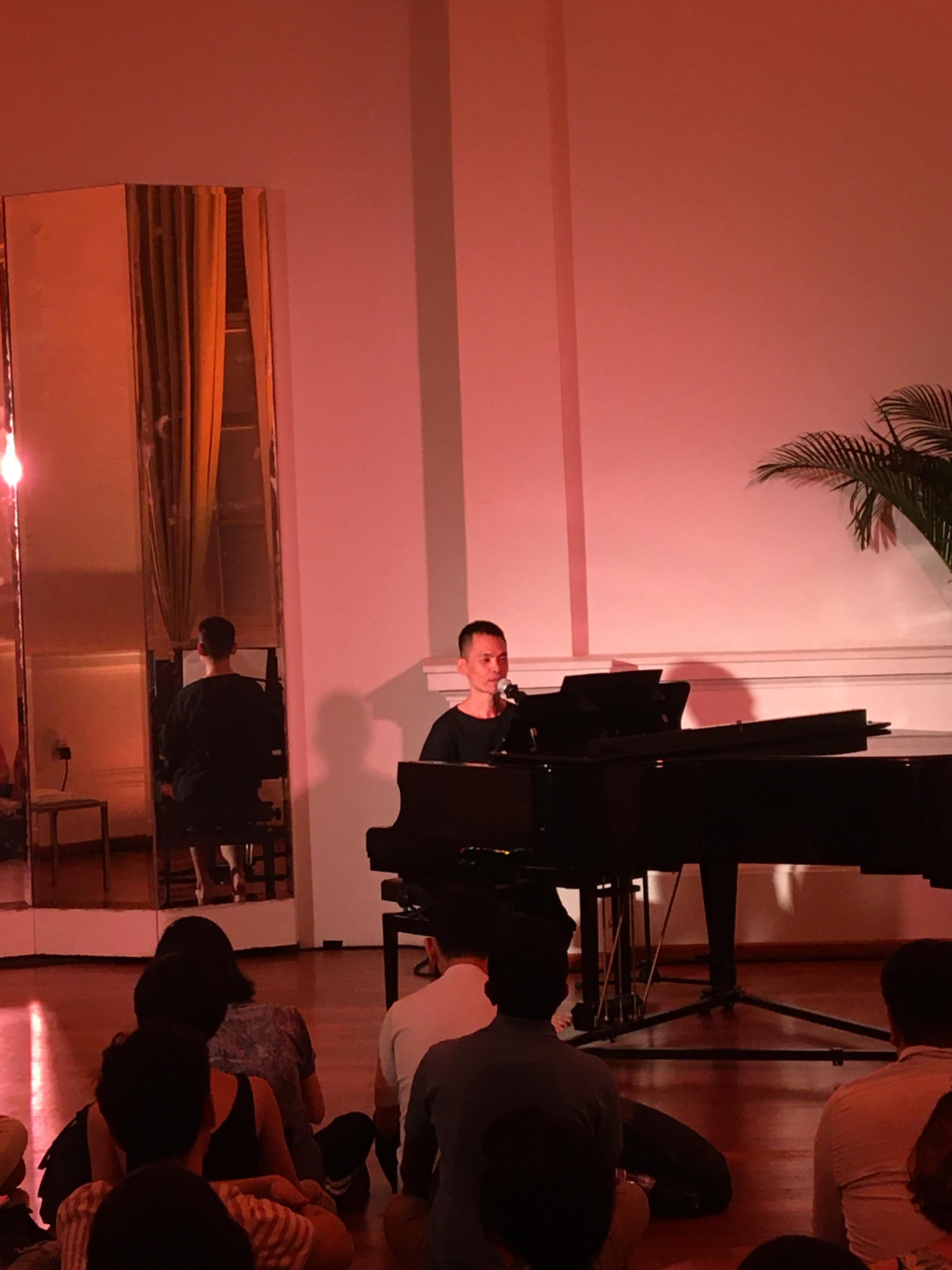 We began our journey up at the Blue Room, with a wedding party by the Eurasian Association complete with ‘wedding band’ Muzik Line to get the party started while guests partook in the traditional Eurasian food and drink from Quentin’s. Grabbing a couple of snacks (including beloved sugee cake), we made our way over to the Living Room, where poet Cyril Wong was set to perform RISK. A simple medley of re-arranged pop songs from the 80s for the piano (from Cher’s ‘Believe’ to Sinead O’Connor’s ‘Nothing Compares 2 U’), Cyril’s soprano singing voice was impressive, and worked wonders with the nostalgia of his song choices. Coupled with spoken word improv playing off Shelley’s words, RISK was a poignant, intimate, set, that filled us with emotion as we proceeded to the next performance. 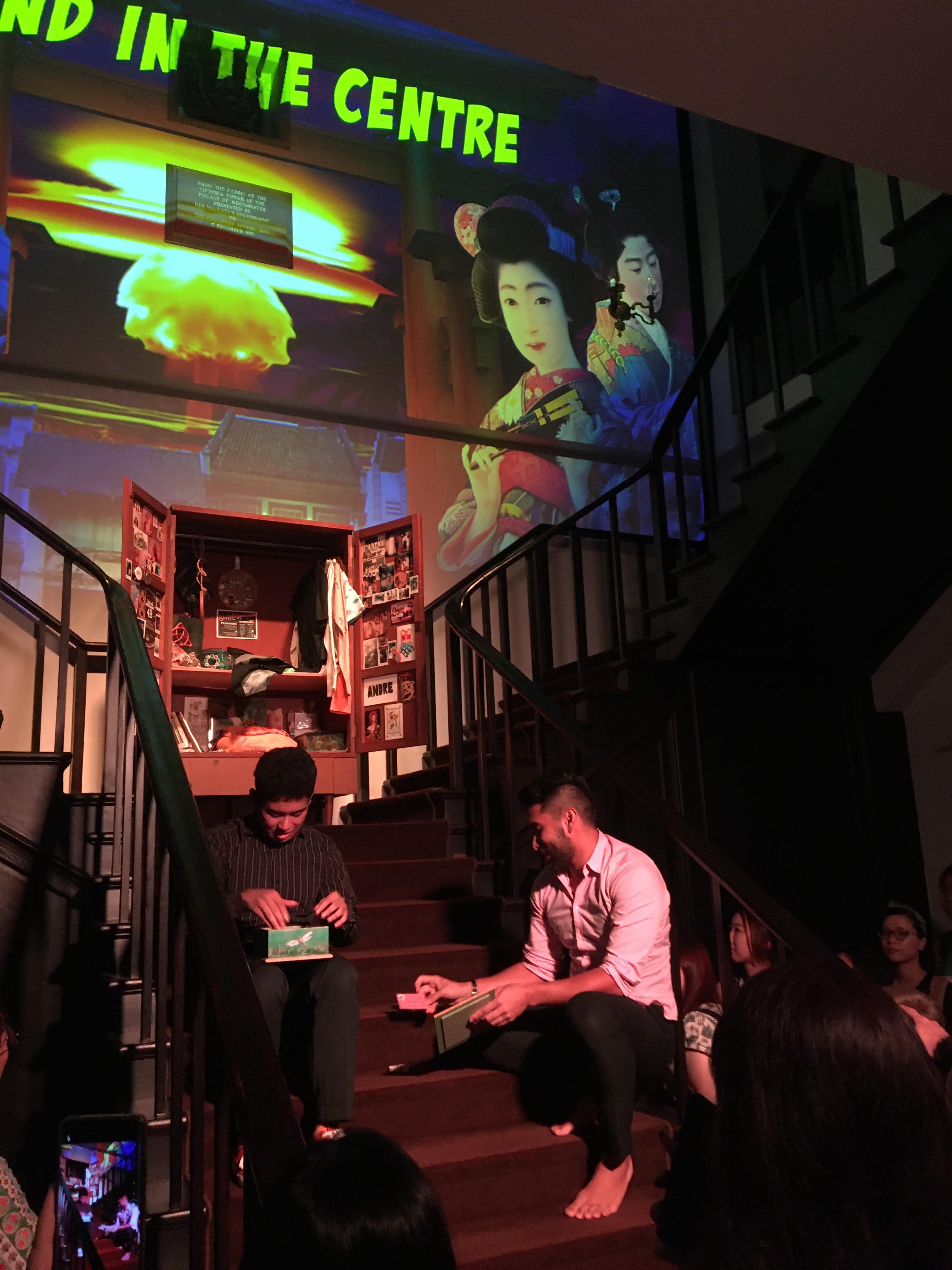 Just outside on the Chamber Landing, Irfan Kasban and Andre d’Rozario performed Almari, a monologue exploring what it means to be an Eurasian today. Written and directed by Irfan, it was only appropriate that d’Rozario co-stars in this piece, as an Eurasian himself heavily involved in the preservation of the Kristang language, as the two explored ‘Andre’s’ personal history through the ‘almari’ (cupboard). Sifting through letters, memorabilia and other paraphernalia, we were taken on an educational and relatable lesson on Eurasian history and the Kristang language that left us curious for more.

Over at the Play Den, the Main Tulis Group presented their signature ETA 9mins programme, with a series of  dramatised readings of brand new plays from the group, each inspired by the quote “I know the Malay of your accent” from Shelley’s The Shrimp People. We caught two sets from the group, starting with Hazwan Norly’s Korban and Adib Kosnan’s The Malay Problem. The comic Korban features a Chinese-Malay couple in a strange predicament – the wife has stolen a lamb from the mosque, leading to some hilarious sheep puns, before the tone takes a sharp turn and the two reveal their grief over a recent miscarriage. While tonally iffy, this was a play we could see being developed into a full-length play, and wonder if the group plans on further developing some of their many playlets. With The Malay Problem, a man returns to the present from the year 2134 and tells a Malay man of the great ‘homogenization’ and removal of Malay culture in the future. In spite of the sci-fi twist, Adib manages to make it believable, and raises some interesting questions about what the difficulties the Malay community today is facing.

In our second set, we caught Nessa Anwar’s Broadcast of All Things Unrelated and Ahmad Musta’ain’s Tarian Kakak. In the former, we meet a couple comprising an English news broadcaster and a Malay language teacher, in a future where the Malay language has been outlawed. While there were issues in attempting to explain the entire context to audience members, this was a highly imaginative plot that felt deeply relevant to today’s time and new forms of racism rearing its head. In Tarian Kakak, we watch the interaction between two sisters, as one of them awaits her white fiance to return. Tarian Kakak does not have much of a plot, but is effective in displaying the fraught relationship between both women, and between a carer handling her patient, at times hitting strong emotional notes with its down to earth writing style and realism. 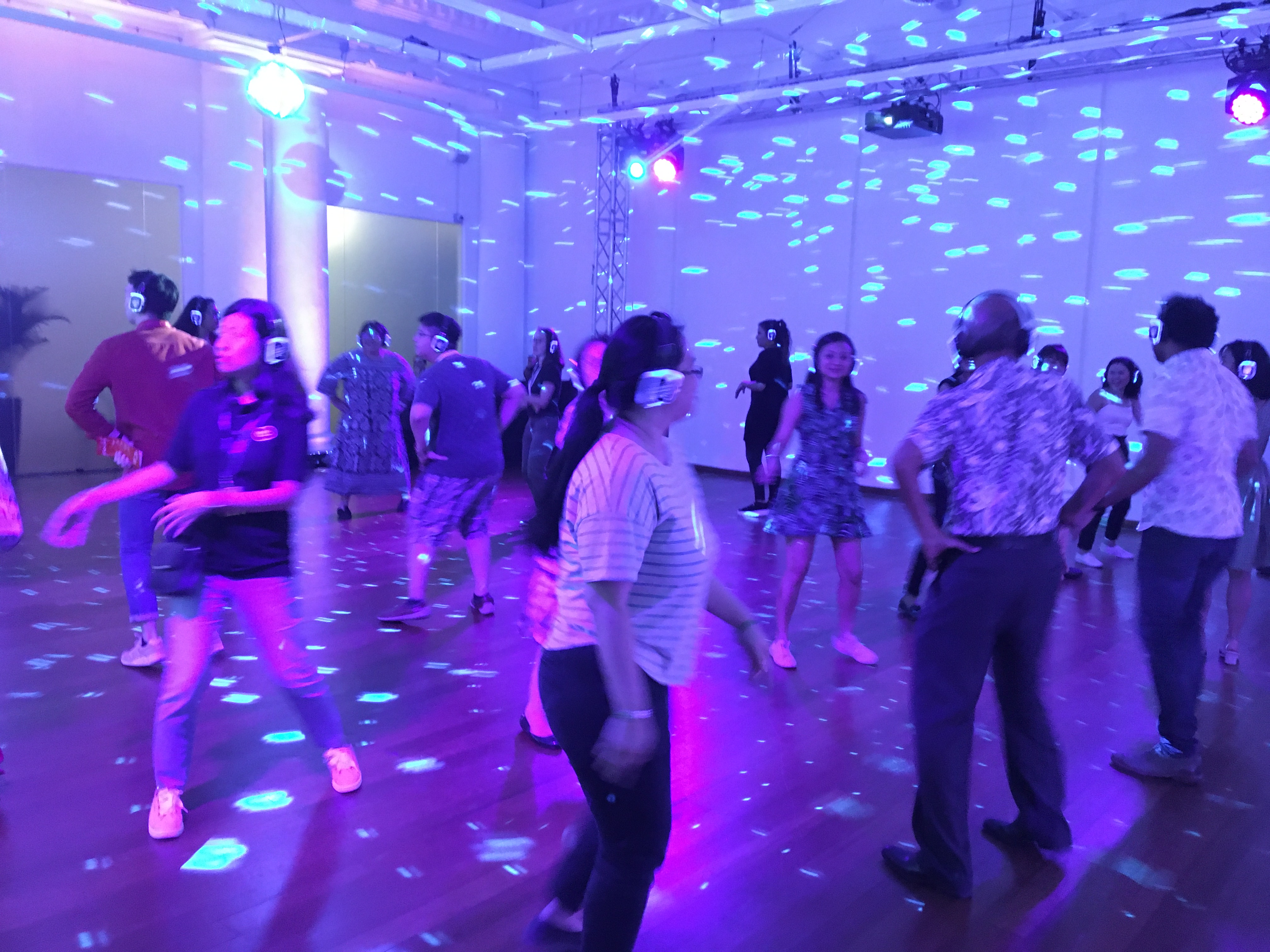 Throughout the night, Edith Podesta also hosted Jinkil Nona Redux, where participants took part in an alternative silent disco, learning steps to the Jinkli Nona – a traditional Portuguese Malaccan folk song, while watching a video of interviews with members of the local Eurasian community, and as much as we had two left feet, still found ourselves having plenty of fun just letting go in joy of the spinning disco lights. Meanwhile sound artist Bani Haykal presented Encrypting Kinships at the Chamber, where up to 20 audience members at a time experienced a soundscape writen in ciphertext, and given his knowledge in both music and tech, makes for a rather trippy, reflective experience. 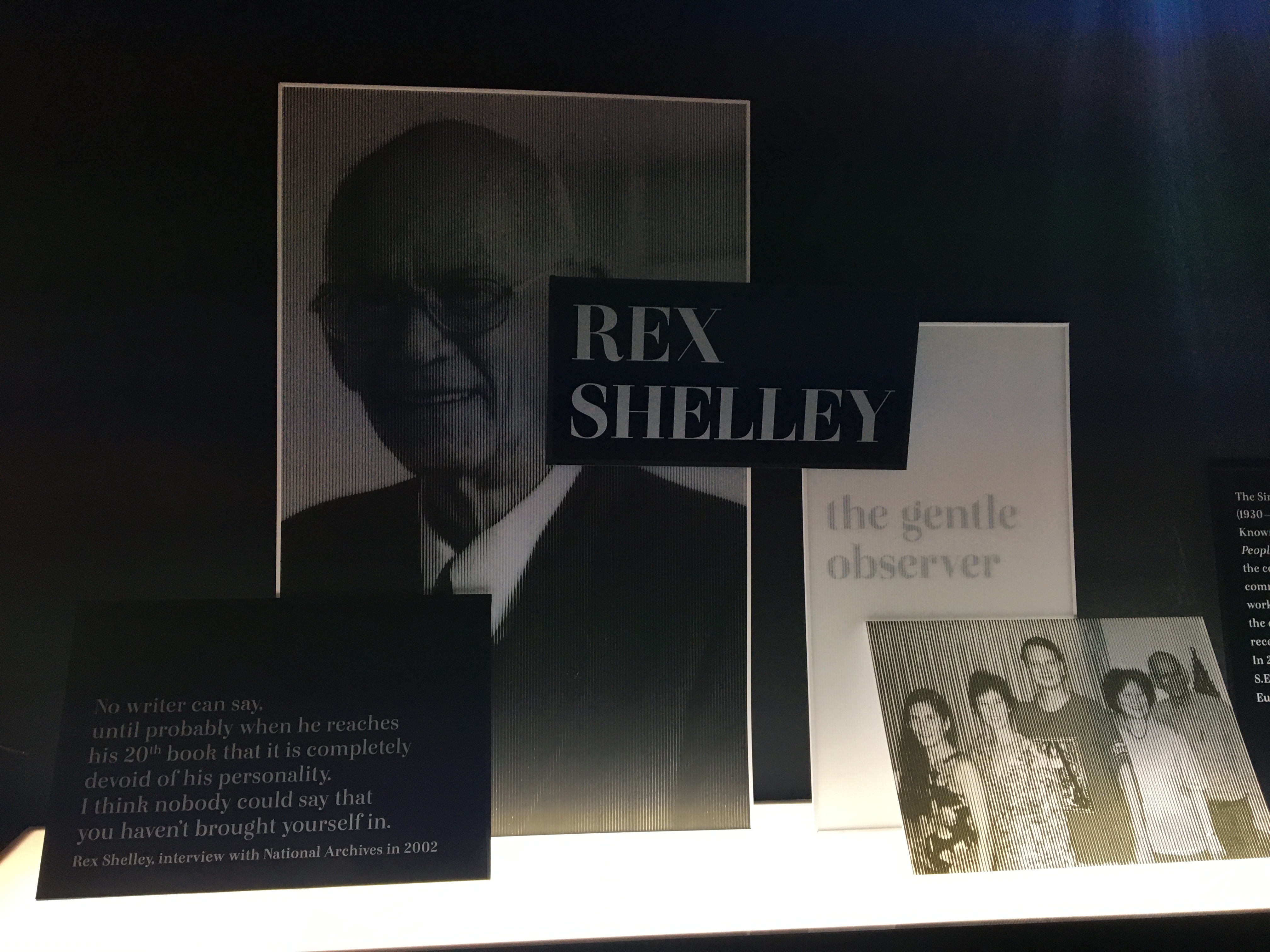 For those who required a quiet moment to relax, off in the corner of the Arts House, a multimedia exhibition that explored the life of Rex Shelley and the impact his work left behind on the Singapore literary scene. Brian Gothong Tan designs the work such that one can simply sit down and watch the video feed of interviews playing before you, flowing like waves through time as we hear even from Shelley himself, while one can also explore the artefacts relating to his work. Even though we’ve never personally read any of Shelley’s works, one is certainly inspired to read a few after experiencing this exhibition in particular, which continues to run all the way till the end of November. 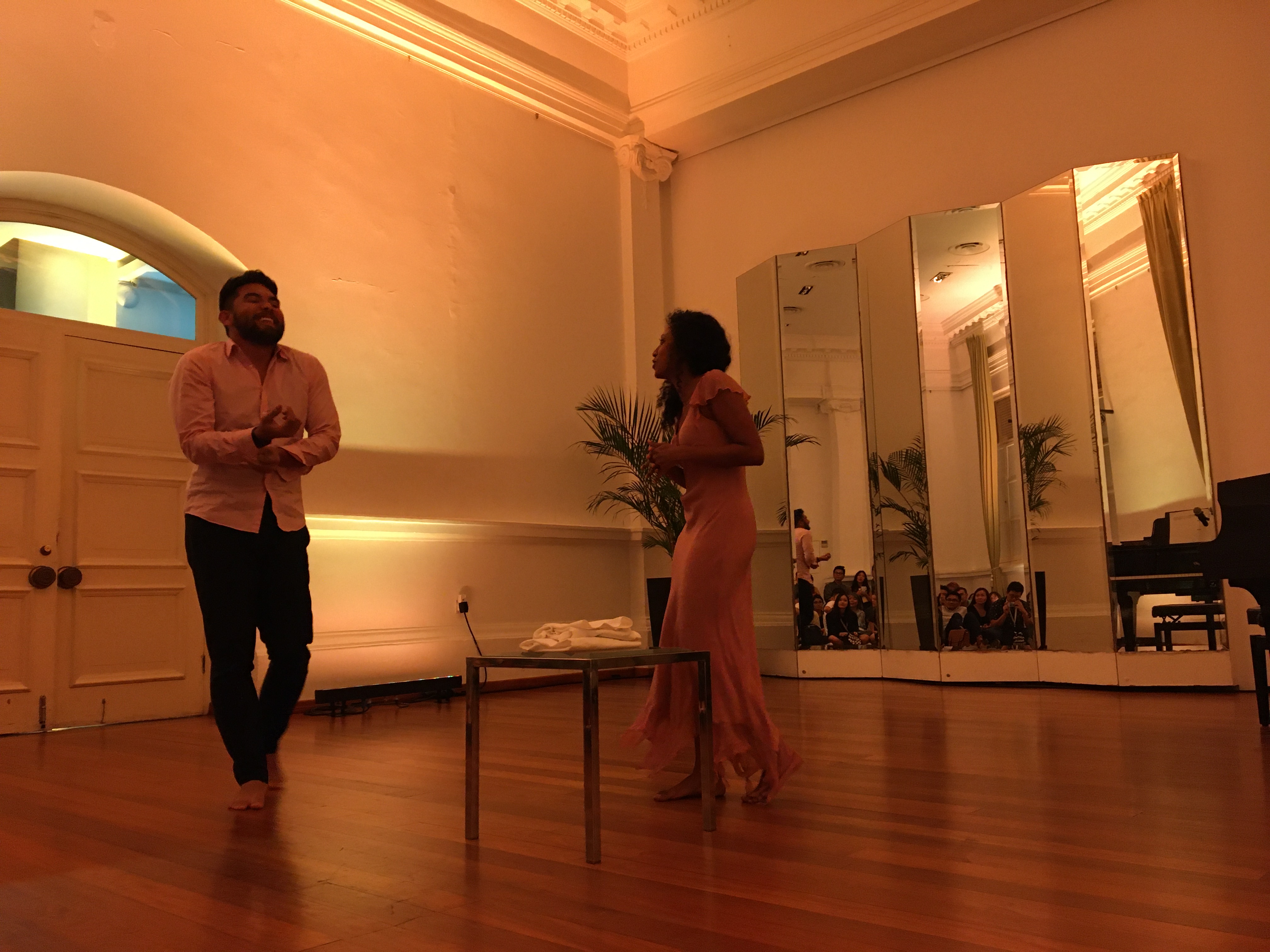 For our final event of the night, we caught Irfan Kasban again as he came to the Living Room with Ruby Jayaseelan to perform Watch My Damn Mouth. Portraying the best man and maid of honour of the wedding respectively, the initially light-hearted piece takes a dark turn when the caterer enters and realise they’ve forgotten to consider both Irfan and Ruby’s dietary restrictions, presenting them with a rather measly serving of fried wantons. Reacting to this, they both begin to laugh maniacally, pointing to each other and playing some kind of absurd game as they pick up the wantons, feeding them to each other, laughing in a mix of sheer incredulity and sadness at the realisation that they’ve been marginalised once again. There’s something hypnotic about the way they move and commit to each pose and position, and the high point of the performance comes when both performers enter the audience space, yelling ‘no pork! no beef!’ at the brown-skinned audience members and handing them wantons, while to the Chinese, they simply laugh and yell ‘naaaaah!’, highlighting the discrepancy in treatment between races. The sheer energy displayed in this is riveting to watch, disturbing in their too loud laughter and evident mania that we can’t help but simultaneously be horrified and absurdly amused by, one that we hope can be re-presented in another form sometime in future as well. 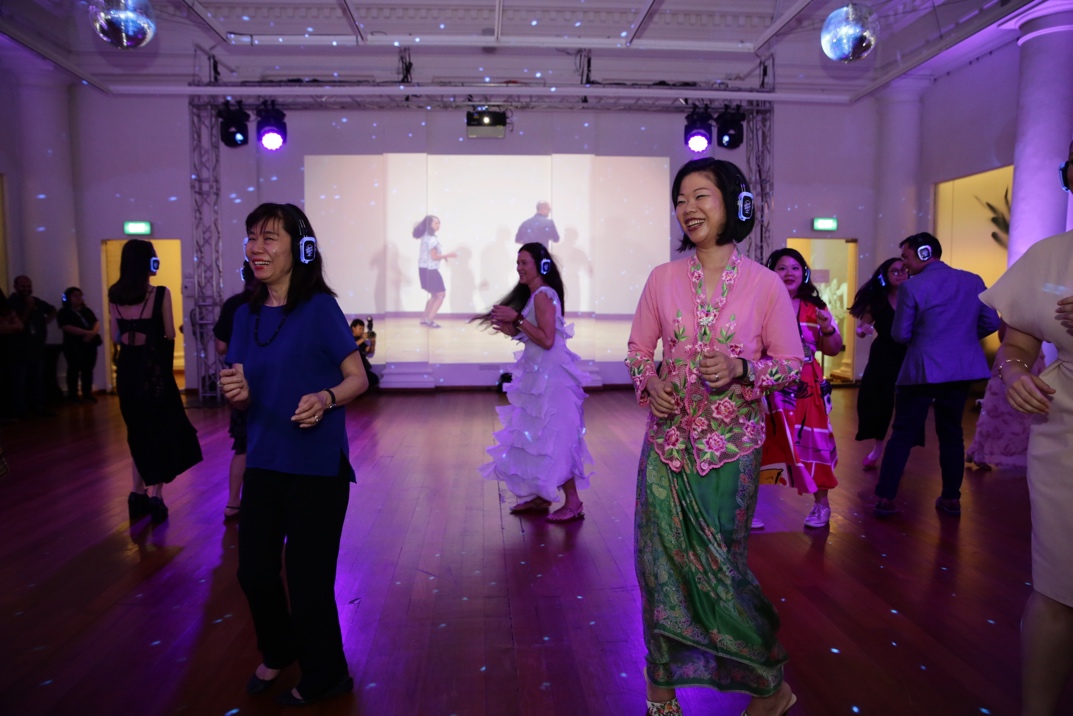 As Muzik Line returns to the stage for the closing and plays one last hurrah and the Arts House closes its doors to mark the end of the wedding party, we’re left in a rather celebratory mood, feeling the rush from the sheer variety of texts and artistic performances we’ve experienced in a single night. Indeed, with the amount of activity happening simultaneously, the buzz of energy in the air from the excited guests, this truly is a bigger party than expected, and sets up the right mood to begin the Singapore Writers Festival proper.

A Bigger Party Than Expected ran at The Arts House on 1st November 2019 as part of the Singapore Writers Festival.