Following Awakenings: Art in Society in Asia 1960s–1990s held earlier this year, National Gallery Singapore’s dives even deeper into the period as it presents its latest exhibition – Suddenly Turning Visible – Art & Architecture In Southeast Asia (1969 – 1989), which explores the experimental art forms that emerged during the late 1960s to the late 1980s in response to rapid urban development.

Curated by Cheng Jia Yun, Joleen Loh, Seng Yu Jin and Shabbir Hussain Mustafa, the exhibition’s title refers to a phrase by Filipino artist Raymundo Albano, describing the transformation of Manila’s urban landscape as a tangible manifestation of the city’s aspirations. This in turn relates to the significant shift in the history of art in Southeast Asia arising in response to this development, which saw the rise of interdisciplinary, experimental and conceptual art. With the late 1960s to late 1980s known as a period of rapid social and economic change in Southeast Asia, the transformation of cities like Singapore, Bangkok and Manila via massive state-led infrastructure projects spurred artists and architects to then offer varying perspectives towards this new vision of modern urban life. 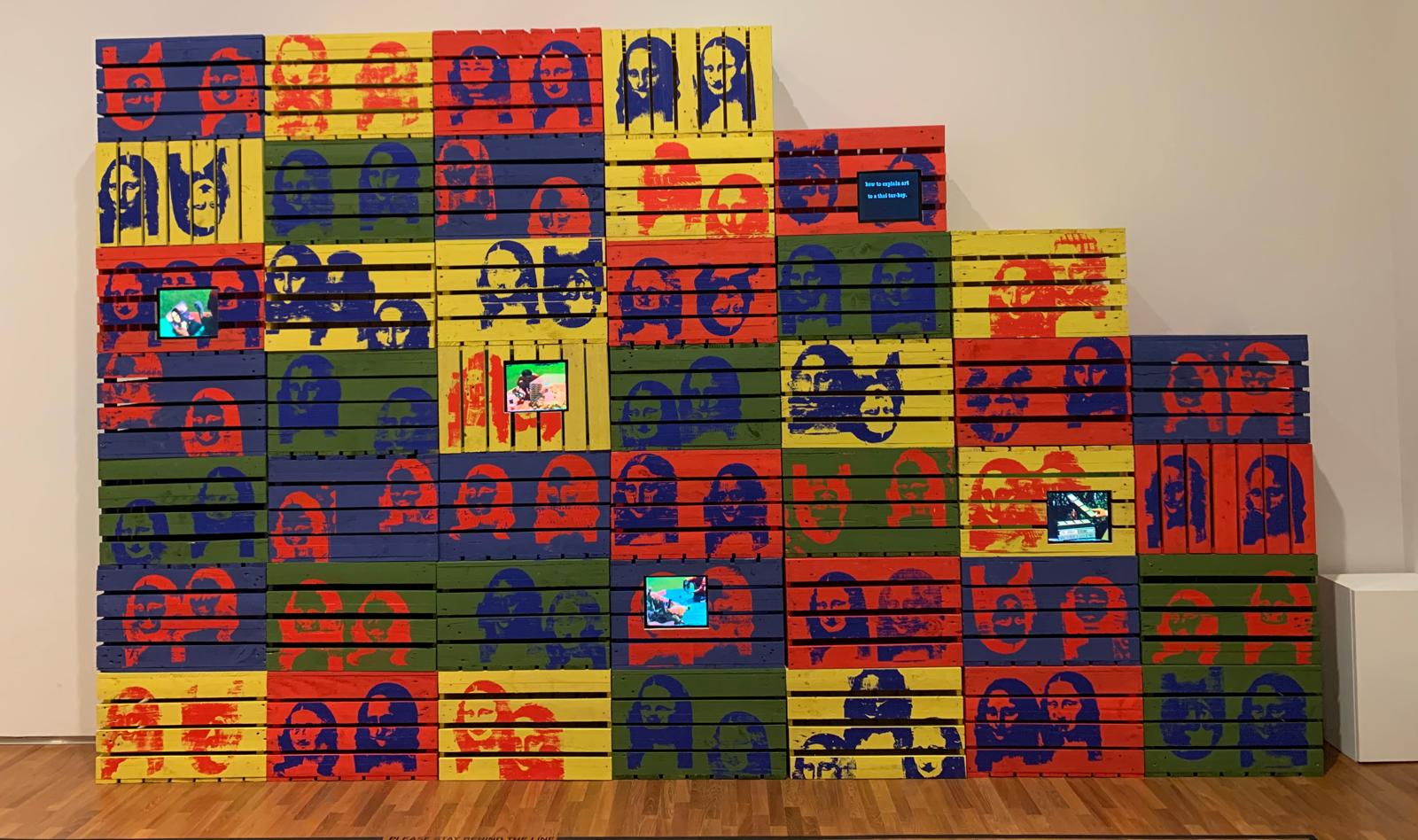 The exhibition opens with a spotlight on the architects behind the three institutions that embodied this desire for progress: Leandro V. Locsin, architect of the Cultural Center of the Philippines (CCP); Mom Luang Tridhosyuth Devakul, who designed the Bhirasri Institute of Modern Art (BIMA) ; and Lim Chong Keat, co-founder of Alpha Gallery and architect of the Singapore Conference Hall and Trade Union House. In designing these purpose-built art spaces, these three architects were informed by international design movements such as Brutalism and the Bauhaus, which expressed the values of democracy, equality and progress promoted by the new social order, integrating art and architecture by inviting local artists to create works for their buildings. 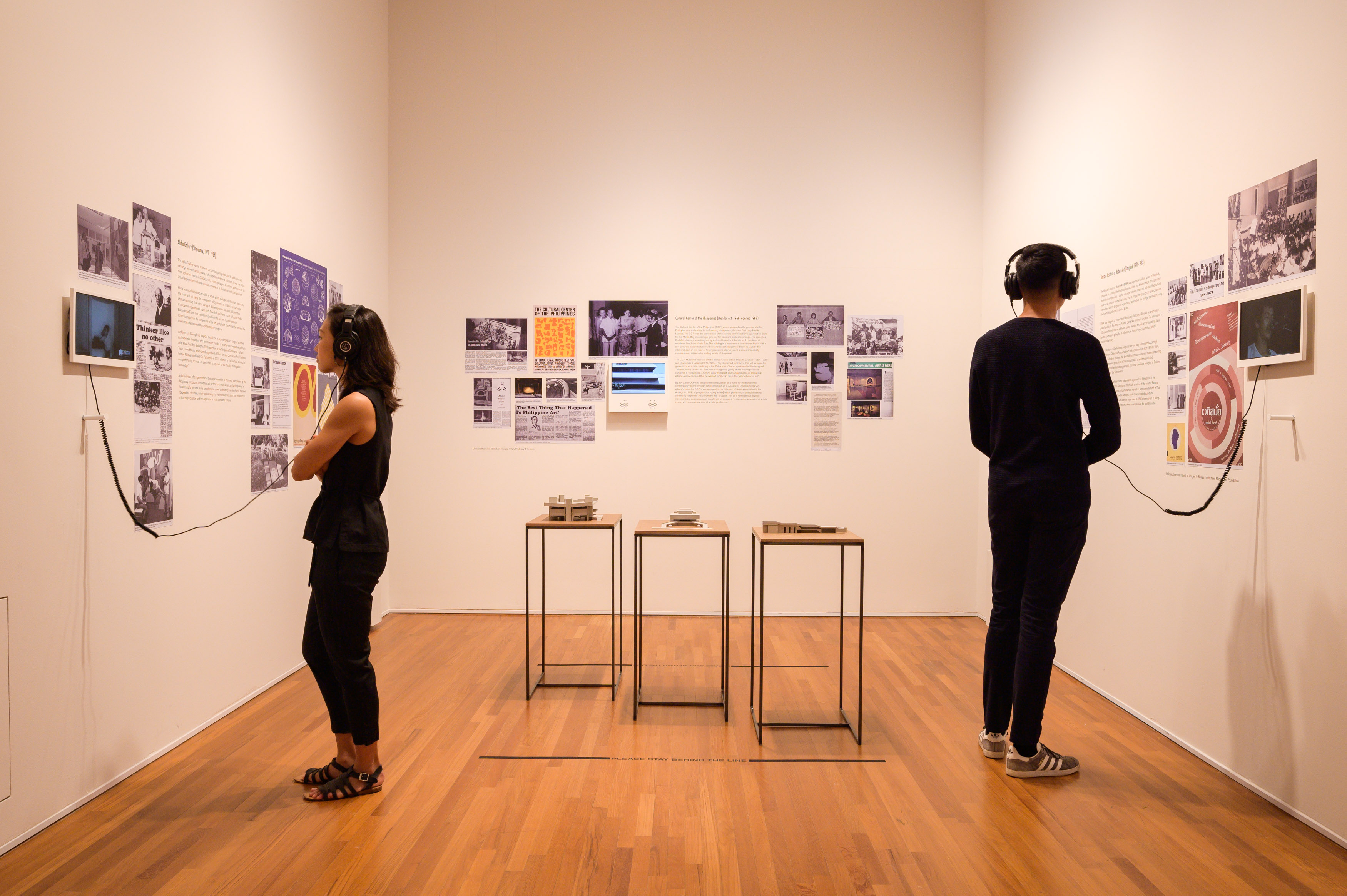 Lim Chong Keat, for example, commissioned Khoo Sui Hoe to create a painting that would welcome audiences into the Singapore Conference Hall and Trade Union House. The resulting work was Children of the Sun, a monumental 2.4m-tall painting that demonstrates Khoo’s dynamic figurative style during the early years of his practice. This would mark one of the earliest instances in Singapore where art was integrated directly into the design of a building, blazing the trail for future generations of local architects who continue to incorporate art within their work today. Children of the Sun will be shown alongside Filipino artist Hernando Ocampo’s Genesis, which was woven into an intricately patterned curtain for the CCP’s Main Theatre. Together, these works exemplify the close relationship between art and architecture that continues to be relevant in the present day. To bring the work of these three architects to life, Singapore artist Michael Lee has been commissioned to create new sculptural models of the CCP, BIMA and the Singapore Conference Hall, which are accompanied by views of their current sites via Google Earth Flythrough.

In addition, the period saw artists freely reinventing international art movements such as abstraction, realism and conceptualism while creating a dialogue with folk and vernacular traditions from across Southeast Asia. Suddenly Turning Visible then presents over 50 artworks across the Ngee Ann Kongsi and Koh Seow Chuan Concourse Galleries at the basement of National Gallery Singapore. The Ngee Ann Kongsi Concourse Gallery will highlight the evolution in form and medium of art, alongside archival documents, photographs and publications, illustrating the pioneering role of Alpha Gallery, CCP and BIMA as vital platforms for artistic expression and discourse. Works here include Thai artist Panya Vijinthanasarn’s Struggle, which incorporates Buddhist iconography traditionally used in Thai mural painting with abstract geometric forms; Filipino artist David Medalla’s Kumbum series of collaged placards, which document the social upheaval and economic inequality of the post-War period; and the mural-sized painting Flight to Freedom by Filipino artist Pacita Abad, which illustrates the plight of Cambodian refugees escaping into Thailand during the Vietnamese intervention in 1979.

Suddenly Turning Visible also features several major works which have been reconstructed and restaged specially for the exhibition. One of the iconic experimental works being restaged is the large-scale performance Cassettes 100 by Filipino composer and ethnomusicologist José Maceda. Originally presented at the CCP in 1971, it comprises 100 participants moving through the space while playing recordings of indigenous Filipino instruments and voices from cassette players. Cassettes 100 will be staged in Singapore for the first time in a one-time-only performance at the Gallery on 23rd November at 3pm. Apart from restaging Cassettes 100, the exhibition also showcases four reconstructed works in the Koh Seow Chuan Concourse Gallery that shed light on social concerns in each city during this period.

Former CCP director Raymundo Albano’s Step on the Sand and Make Footprints was first presented at the 1964 Tokyo Print Biennale. It invites visitors to step into the artwork and leave their footprints in the sand, referencing the abundant sand found around the city due to construction work. Alongside this iconic work are two installations previously shown at BIMA: Sickness Age by Vasan Sitthiket, which comprises three coffins bearing the names of Thatcher, Reagan and Gorbachev, who were at the centre of global geopolitics at the time; and Kamol Phaosavasdi’s provocative Song for the Dead Art Exhibition, which features a wall filled with pages torn from postmodern manifestos and essays, challenging the dominance of painting as the preferred artistic medium in Thailand.

The final reconstructed work is State of the Nation by Manila-based social realist collective KAISAHAN. This banner-sized painting illustrates the social injustices and human suffering arising from the declaration of martial law in the Philippines by Ferdinand Marcos. The work recalls the murals and posters that the group created for the protest movement in Manila during this turbulent period.

Some standout works in the exhibition include Pratuang Emjaroen’s The Orchardman’s Smile, a piece that was first shown a the third Dharma Group exhibition at BIMA, one day before the 1976 Thammasat University massacre, before being taken down thanks to its symbolic representation of a military coup, with a beaming man hiding more sinister elements such as bullet holes in the top right hand of the painting.

Prasong Luemuang’s Insanity (1962) takes images from his daily life back in rural Thailand, and melds it with superstitions and cultural practices to showcase a contrast between high art and native art, alluding to topics of fertility, nature and animalism, a frenzy of colour and imagination that feels like a performance on the canvas, depicting the chaos of human behaviour.

Vasan Sitthiket’s Sickness Age was displayed at BIMA in 1985, and comprised larger-than-life stick figures engaged in actions that spoke out against living in a time of excessive consumer culture. These figures were made of wood that the artist had scavenged, which he then assembled on site.

Says Dr Eugene Tan, Director of National Gallery Singapore: “Suddenly Turning Visible presents critical insights on Southeast Asia through the eyes of artists during a period of significant ideological and geopolitical change in terms of discourse and action. Particularly, art histories were examined beyond national boundaries, and measured contributions made by Southeast Asian practitioners to global debates on conceptualism. This spirit of experimentation, innovation and disruption still resonates today, and should be uncovered by a wider audience.” 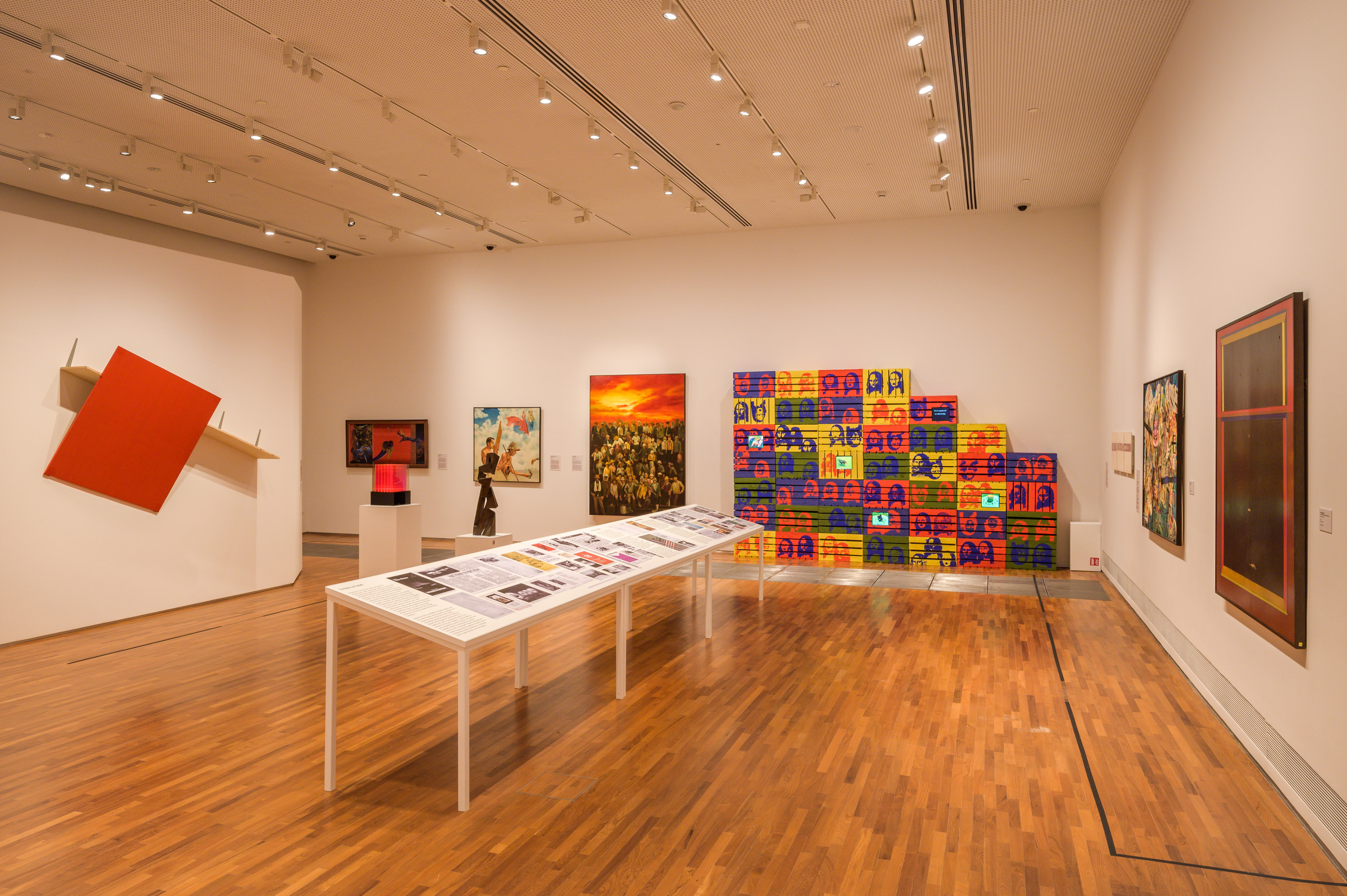 Suddenly Turning Visible feels like a natural follow-up to Awakenings, taking place in the same late period with similar concerns with bringing to light societal issues, less about revolution but more to do with experimentation and a means of highlighting the three art institutes at the centre of the exhibition. Each art work here feels carefully chosen, themselves not the artists’ most renowned works, but each holding their own share of historical significance and value. There is plenty to admire and discover in Suddenly Turning Visible, as one observes how architecture and history come together to inform Asian art practices.