Music Is: VCHPresents – Chamber, with The Stradivari Quartet and Pavel Haas Quartet (Preview) 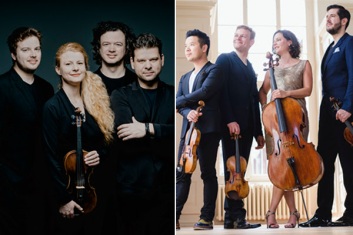 Two of today’s top string quartets perform in the Victoria Concert Hall as part of the SSO’s VCHpresents: Chamber series this spring. In April, the brilliant Stradivari Quartet brings two programmes of Classical and Romantic works; before the Pavel Haas Quartet delves into Beethoven’s magnificent “Great Fugue” for String Quartet in May.

On 17th April, the Stradivari Quartet performs works by Strauss and Enescu before being joined by musicians from the SSO for a rare performance of Klaus Simon’s chamber arrangement of Mahler’s Symphony No.1.

Two days later, on 19th April – at the earlier time of 4pm – the musicians turn to Beethoven, performing two of his great string quartets: No.11 in F minor, Op.95 (“Serioso”) and No.8 in E minor, Op.59 No.2. The concert closes with a contrasting work: Tan Dun’s Eight Colors for String Quartet.

The following month, on 29th May, the Pavel Haas Quartet brings a programme of Dvořák, Schulhoff and Beethoven to the Victoria Concert Hall. The climax of the concert is one of Beethoven’s most famous works for string quartet: his String Quartet No.13 in B-flat major, Op.130, performed in its original form with the monumental “Great Fugue” (Op.133) to close. The great Russian composer Stravinsky said of the fugue ‘[it is] an absolutely contemporary piece of music that will be contemporary forever.”

Since it was formed in 2007, the Stradivari Quartet has built up an enviable international reputation for itself both through its concerts and with its trademark, StradivariFESTEN. Throughout all of this it has remained in close contact with its audiences, who often follow the players as a loyal and enthusiastic fan base, enjoying not only the concerts themselves but all the attendant action. The result is an enthusiasm for music and culture on the very highest level in Zurich, Hamburg, Cremona and many other places.

The Pavel Haas Quartet was founded in 2002 by the violinist Veronika Jarůšková and the violist Pavel Nikl, who was a member of the ensemble until 2016, when he left due to family reasons. Following their victory in the Prague Spring Festival Competition and Premio Paolo Borciani in Reggio Emilia, Italy in 2005, the Pavel Haas Quartet soon established themselves as one of the world’s most exciting contemporary chamber ensembles. Performing at the most renowned concert venues around the globe, the PHQ have made numerous critically acclaimed recordings, which have received many prestigious awards. The ensemble members studied with Milan Škampa, the legendary violist of the Smetana Quartet.

The Stradivari Quartet plays Mahler on 17th April, while they will play Beethoven on 19th April 2020, both at the Victoria Concert Hall.

The Pavel Haas Quartet – The Great Fugue plays on 29th May 2020 at the Victoria Concert Hall. Tickets available from SISTIC