Two years after it inaugurated in Paris, National Gallery Singapore’s first travelling exhibition of Southeast Asian art, Latiff Mohidin: Pago Pago, will return to the Gallery from 27th March to 27th September 2020. Visitors will be able to discover the life and practice of Malaysia’s leading artist-poet and how his travels across Europe and Southeast Asia informed his work, which defined a place for this region in modern art.

Conceived by curators Shabbir Hussain Mustafa of National Gallery Singapore and Catherine David of Centre Pompidou, the exhibition features more than 80 artworks and writings alongside rare photographs and films drawn from private and public collections in Singapore and Malaysia, the Gallery’s exhibition follows a ground-breaking debut at Centre Pompidou in Paris and a successful showing at ILHAM Gallery in Kuala Lumpur in 2018. Its journey from Southeast Asia to Europe and back parallels Latiff Mohidin’s own experiences as a young artist from 1949 to 1969, when he embarked on numerous life-changing journeys across British Malaya as a young boy, and then across Europe and Southeast Asia as a student and aspiring artist. With the intention of challenging Western modernism, Latiff Mohidin often asks himself, “how does one advance the mediums of painting, drawing and writing to suit local milieus outside Europe and America?” In telling his story, the exhibition will also feature a new section showcasing early works made during his formative years in Singapore, alongside resurfaced works once deemed lost. 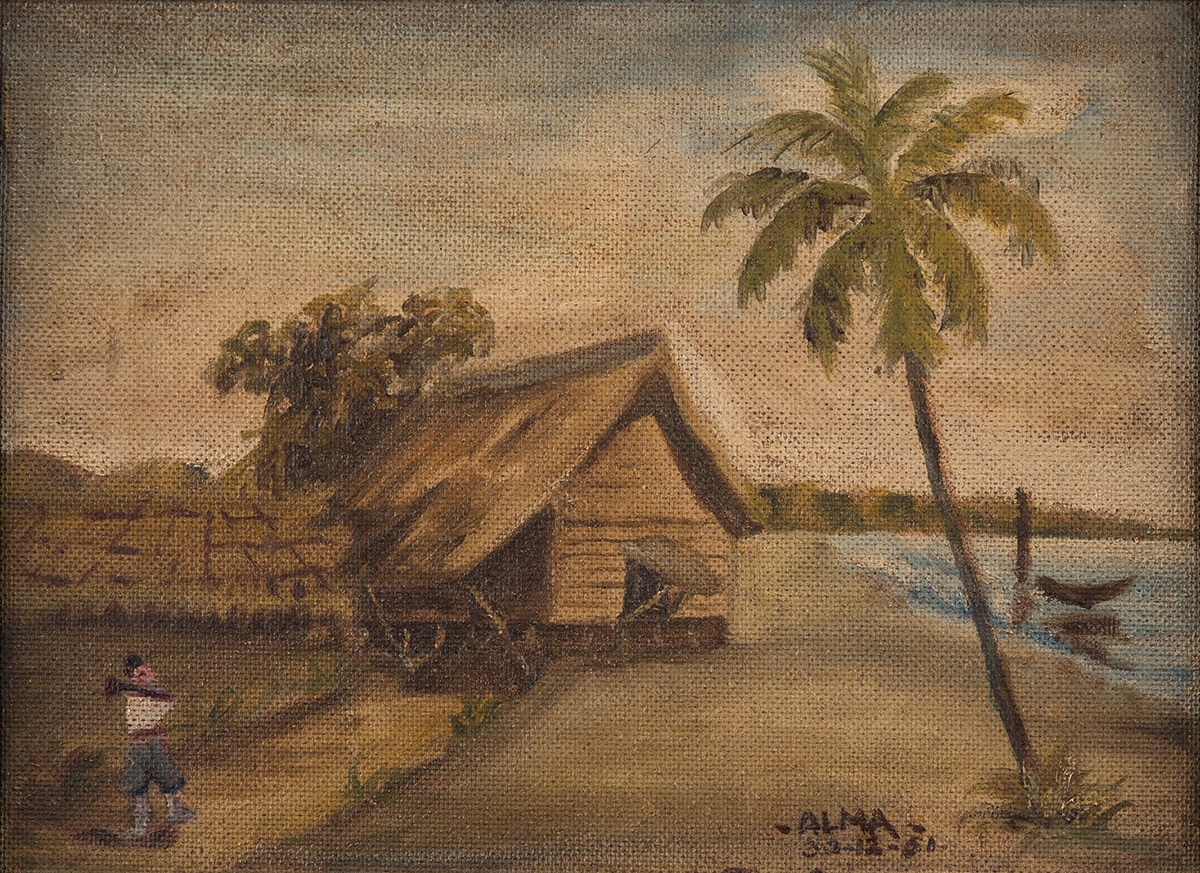 Dr Eugene Tan, Director of National Gallery Singapore said: “Situating Southeast Asia within global art history is a core focus for the Gallery, and Latiff Mohidin’s Pago Pago works are exemplary of a major contribution to this debate. As one of the first artists of the region to imagine ‘Southeast Asia’ as a distinct aesthetic realm, Latiff Mohidin’s practice lends a unique perspective to understand the values and ideals represented in Southeast Asian art and how it engages in dialogue with global art movements.”

In 1949, Latiff Mohidin arrived in Singapore from Kampong Lenggeng, a village in Negeri Sembilan with his mother Hajjah Noor. A cosmopolitan centre for trade and cultural exchange, Singapore was a major transit point to Mecca for pilgrims from across the Malay world, and Kampong Glam was the city’s centre for literary and cultural activity driven by these communities. Latiff Mohidin lived in the Kampong Glam area, where his father Haji Mohidin owned and operated a lodging house for Hajj pilgrims. It was in the urban climate of Singapore that Latiff Mohidin was discovered as an artistic prodigy, hailed in the press as a “boy wonder” with “the gift in his hands”. He was mentored by leading painters and writers of the period, including Suri Mohyani, Abdul Ghani Hamid, Liu Kang and Ho Kok Hoe. In 1953, at the age of 12, he held his ﬁrst solo exhibition at Kota Raja Malay School. This early chapter of Latiff Mohidin’s life is presented exclusively for this exhibition in Singapore. 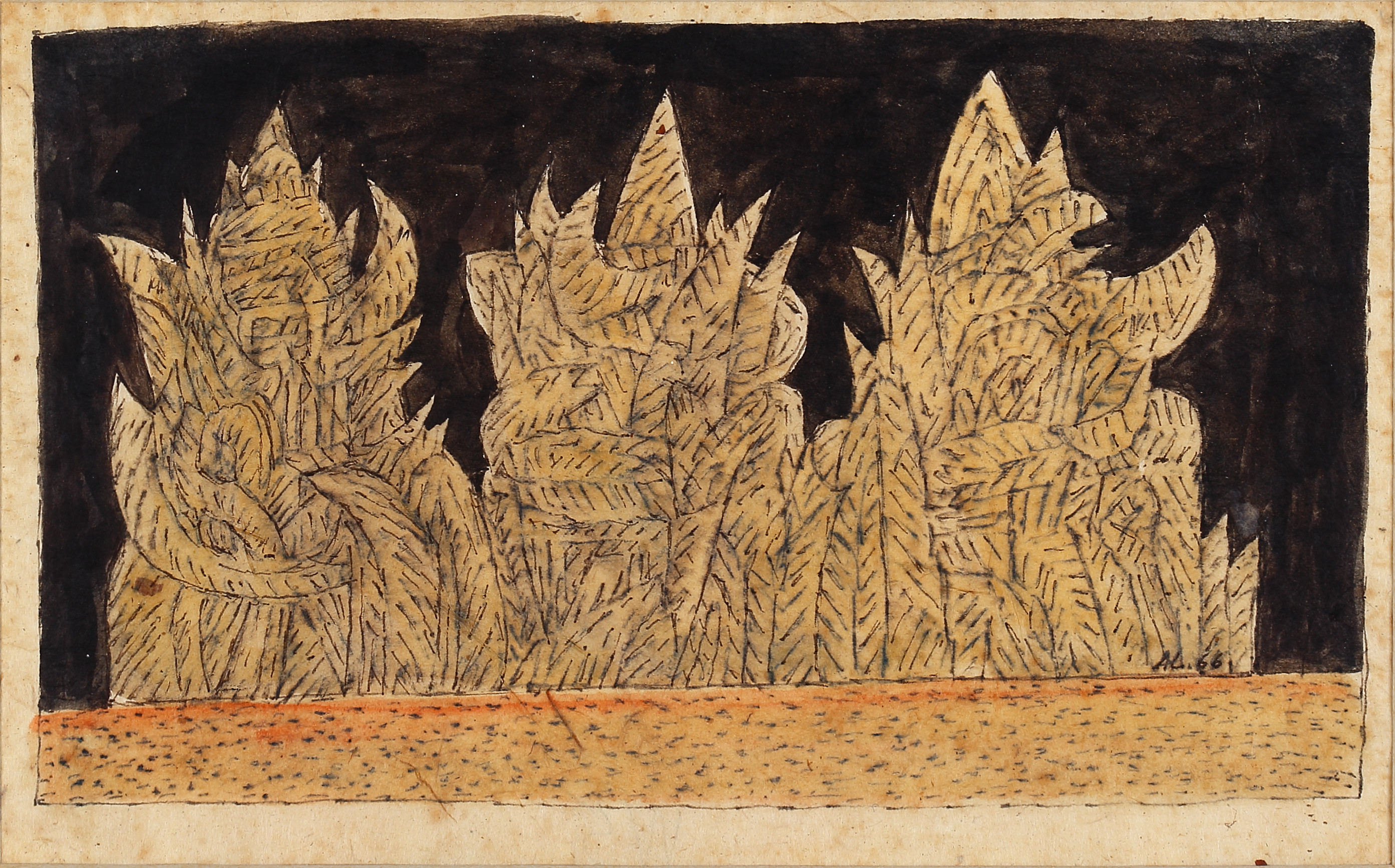 Through the display of some of his earliest paintings, alongside photographs and newspaper clippings that trace Latiff Mohidin’s earliest encounters with art, visitors will be able to see first-hand how his childhood experiences in Singapore geared him for a life of travel and art in the decades to follow. Indeed, one of the key approaches that Latiff Mohidin adopted from 1949-1969 was merantau, a sensibility instilled in his Minangkabau upbringing and heritage, that encourages the community to travel outside of their homeland to seek knowledge and experience from the world. 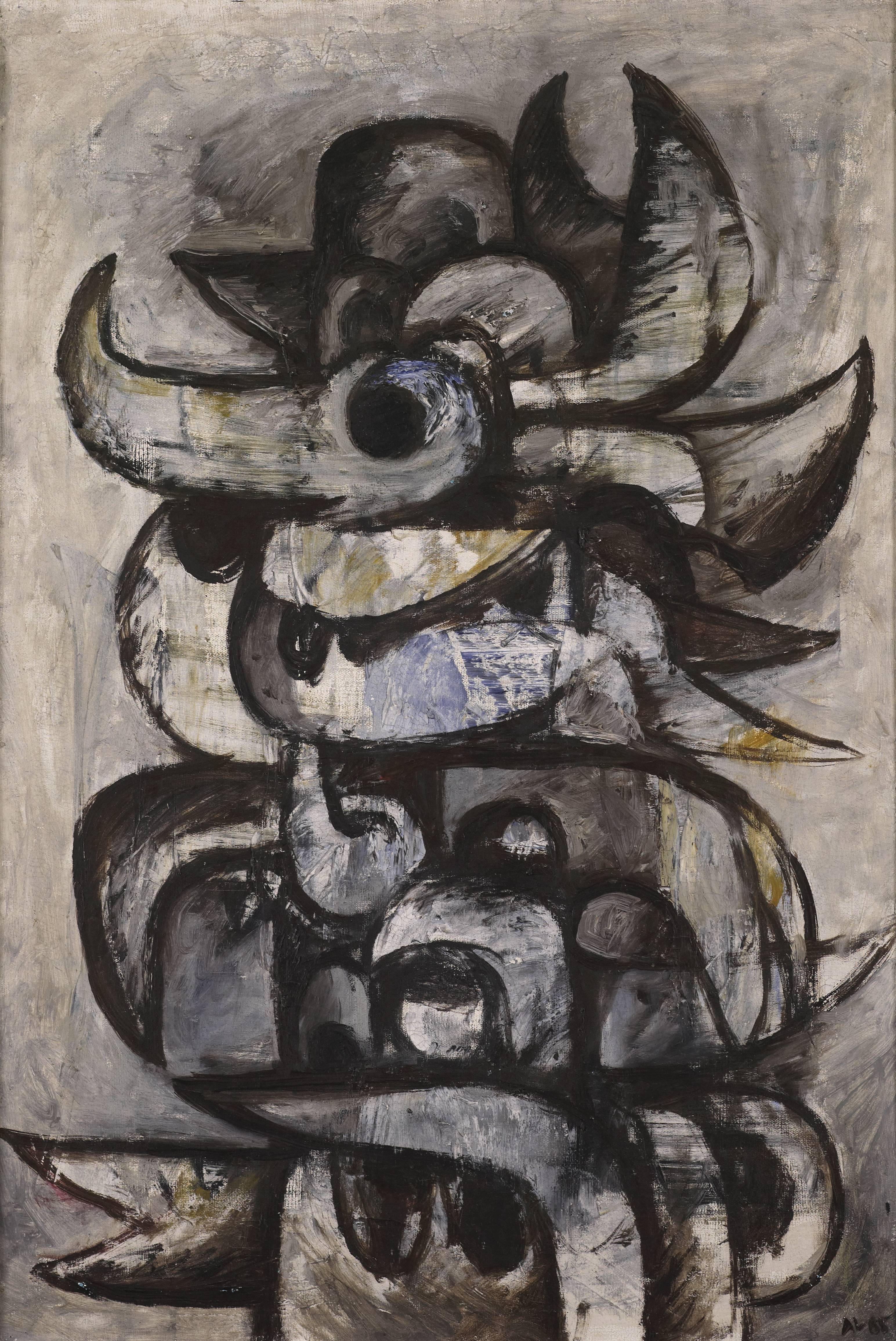 The exhibition will also feature a hand drawn map of Kampong Glam made by the artist exclusively for this exhibition, which highlights the complex layers of the neighborhood as he remembers it from the 1950s. The Gallery is also collaborating with the artist to publish a special booklet titled Half Art Half Craft, which recalls Latiff Mohidin’s interactions with personalities in the world of art and literature in Singapore during the 1950s. A series of public programmes are also being planned in conjunction with the exhibition. 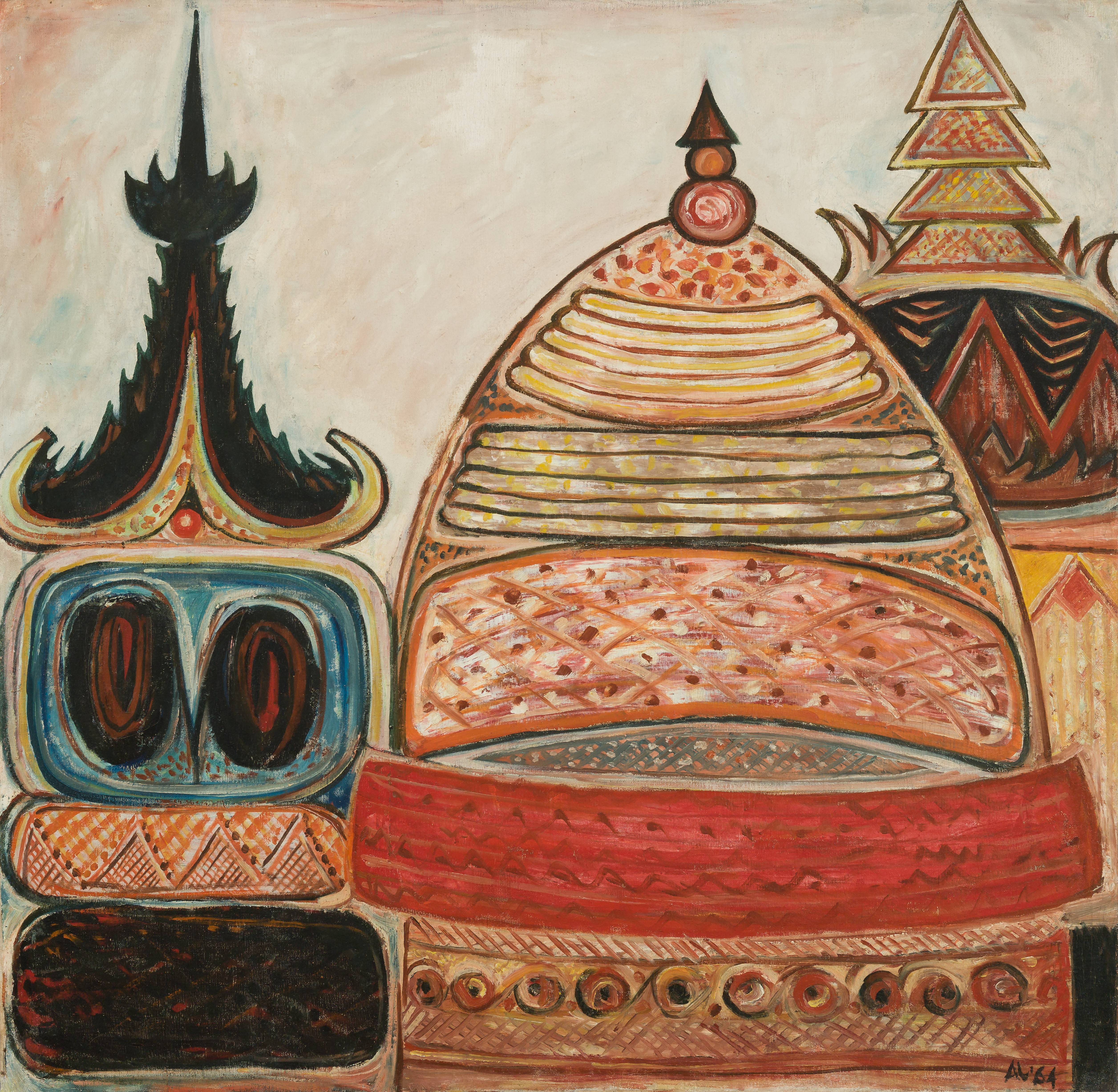 Following Latiff Mohidin’s early life in Singapore, the other three sections of the exhibition follow the travels which left a lasting impact on the artist and his work. It was in Germany where Latiff Mohidin took a less-travelled path (many of his peers travelled to Britain) to continue his formal art education at Hochschule für Bildende Künste in 1960. Studying in Berlin, he was exposed to modernist movements such as Cubism, Futurism, and Surrealism, as well as the worlds of drama, music, experimental ﬁlm, cabaret, and jazz. At the same time, the city enabled him to examine links between his own ancestral imaginary and these progressive ideas. 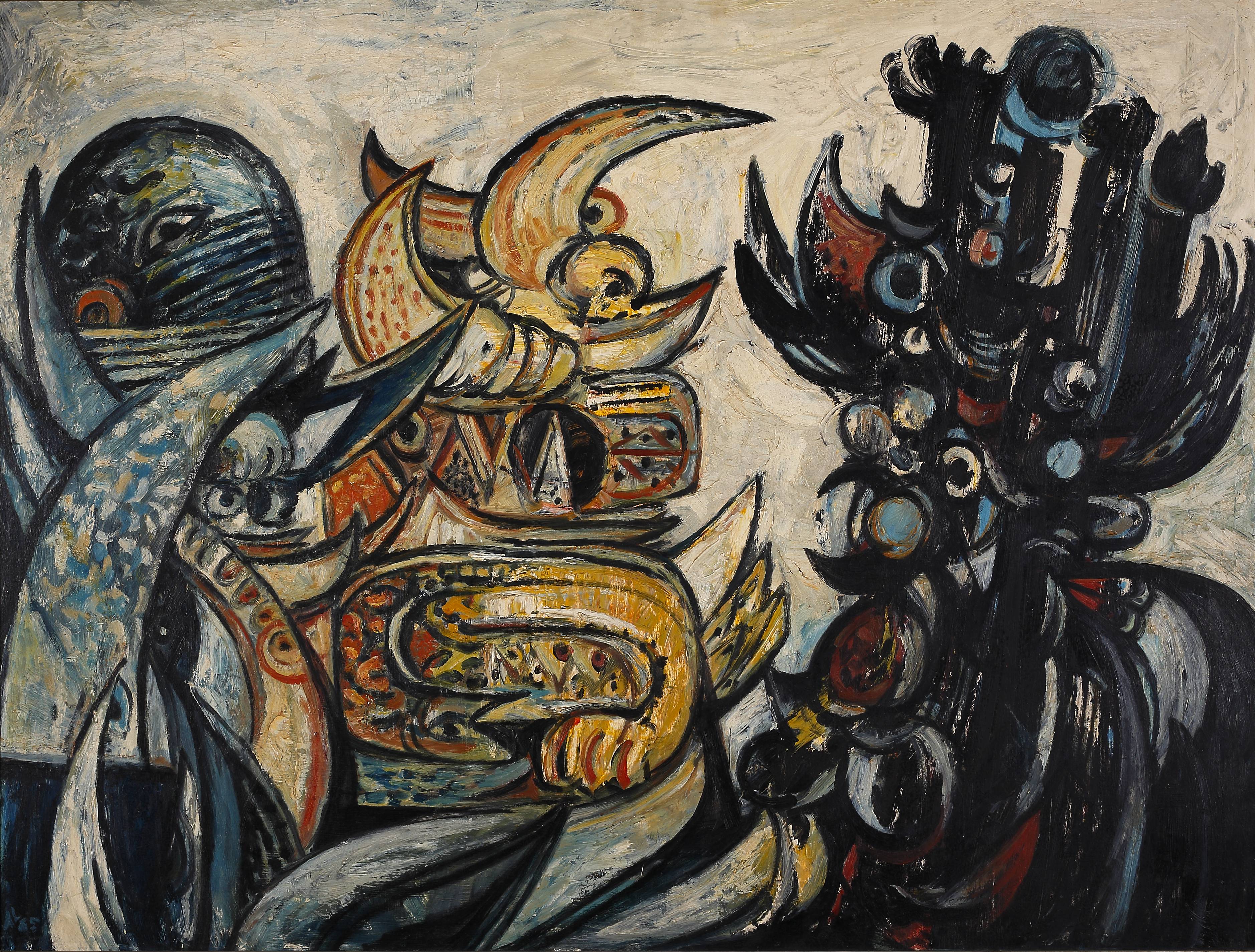 In 1961, Latiff Mohidin encountered Thai and Khmer objects in the Berlin’s extensive ethnological museums, which led to the horns and serrated edges typical of his Pago Pago paintings. The artist recalls, “Pagoda in German may be called “pagoden,” and the word stuck. Later, I took out the sufﬁx “den;” Pago remained. To evoke it colloquially in the Malay language, I began to repeat the word for rhythmic effect — Pago Pago. I also began to recall that the traditional Minangkabau and Batak homes in western Sumatra have shamanic carvings within the four cornered roofs and fences, which are called Pagar Pagar. In my ancestral village in east Sumatra, Pagar Pagar is pronounced Pago Pago.” 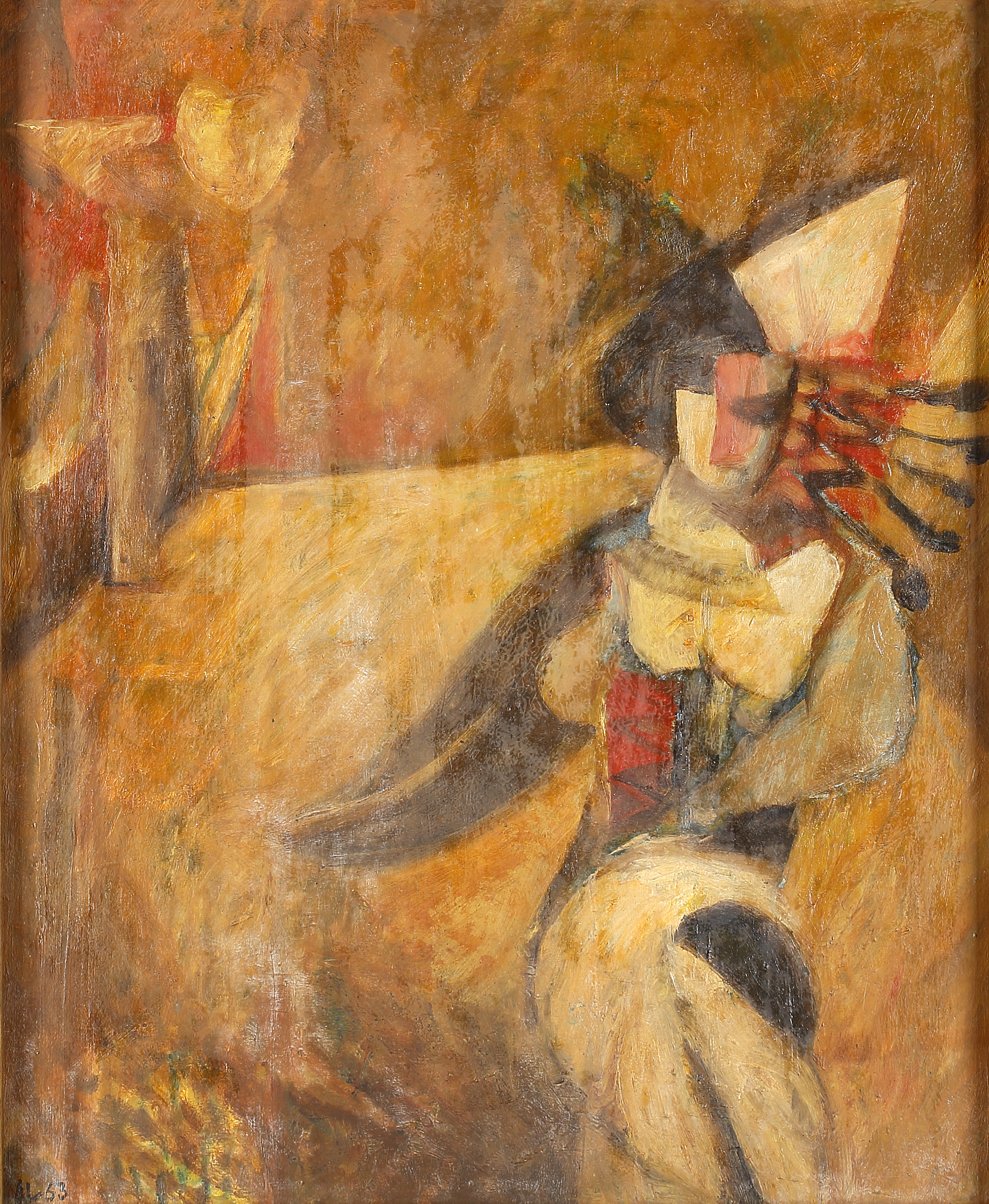 As such, the artist then coined the phrase “Pago Pago” to evoke the consciousness that emerged from his travels, referring to a way of thinking and working that sought to challenge the dominance of Western modernism at the time, giving rise to his Pago Pago series. The distinctive aesthetic of Latiff Mohidin’s Pago Pago series was further developed when he returned to Southeast Asia in 1964. Travelling across the region to Thailand, Cambodia, Laos and Indonesia, he began to explore specific regional phenomena in his paintings and writings. From the temples of Angkor to Balinese dance, the ginger root to bamboo rhizome. The poetry of his Pago Pago period is in free verse form, while the paintings are composed of thick outlines, controlled brush strokes, and jagged or curvilinear shapes. 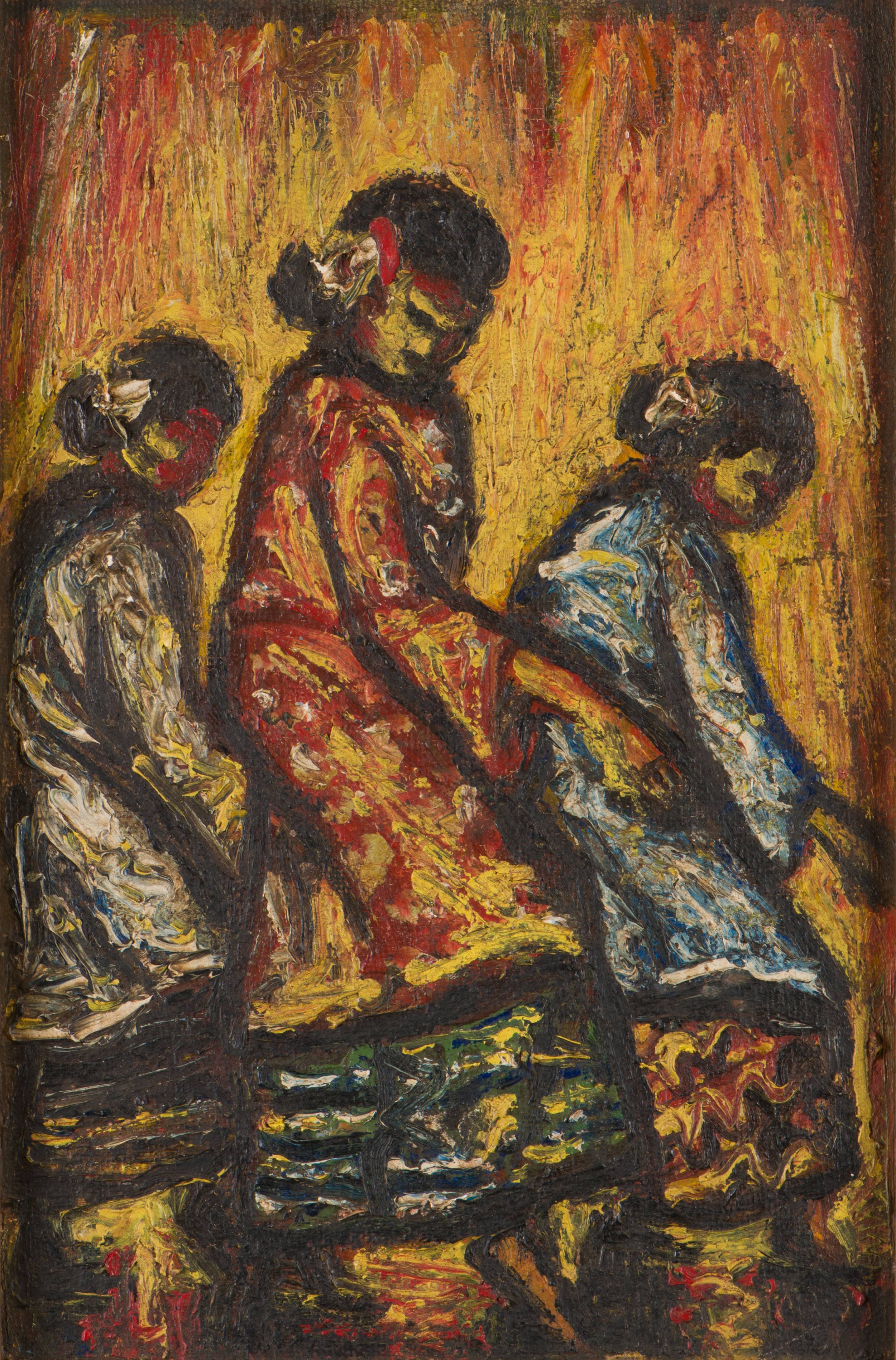 From 1964-1969, he not only travelled extensively but actively engaged with peers who self-identiﬁed as the “avant-garde” of Southeast Asia, including the writer Goenawan Mohamad in Jakarta, the painters Thawan Duchanee and Damrong Wong-Upharaj in Bangkok, and the poets Salleh Ben Joned and Usman Awang in Kuala Lumpur. Together, they aimed to foster a position for the region as a source of new ideas for modern art and literature. In tracing the networks Latiff Mohidin formed from 1949-1969 and how Pago Pago marked a turning point in Southeast Asian art, the exhibition will feature a detailed timeline of events surrounding his life during the period. 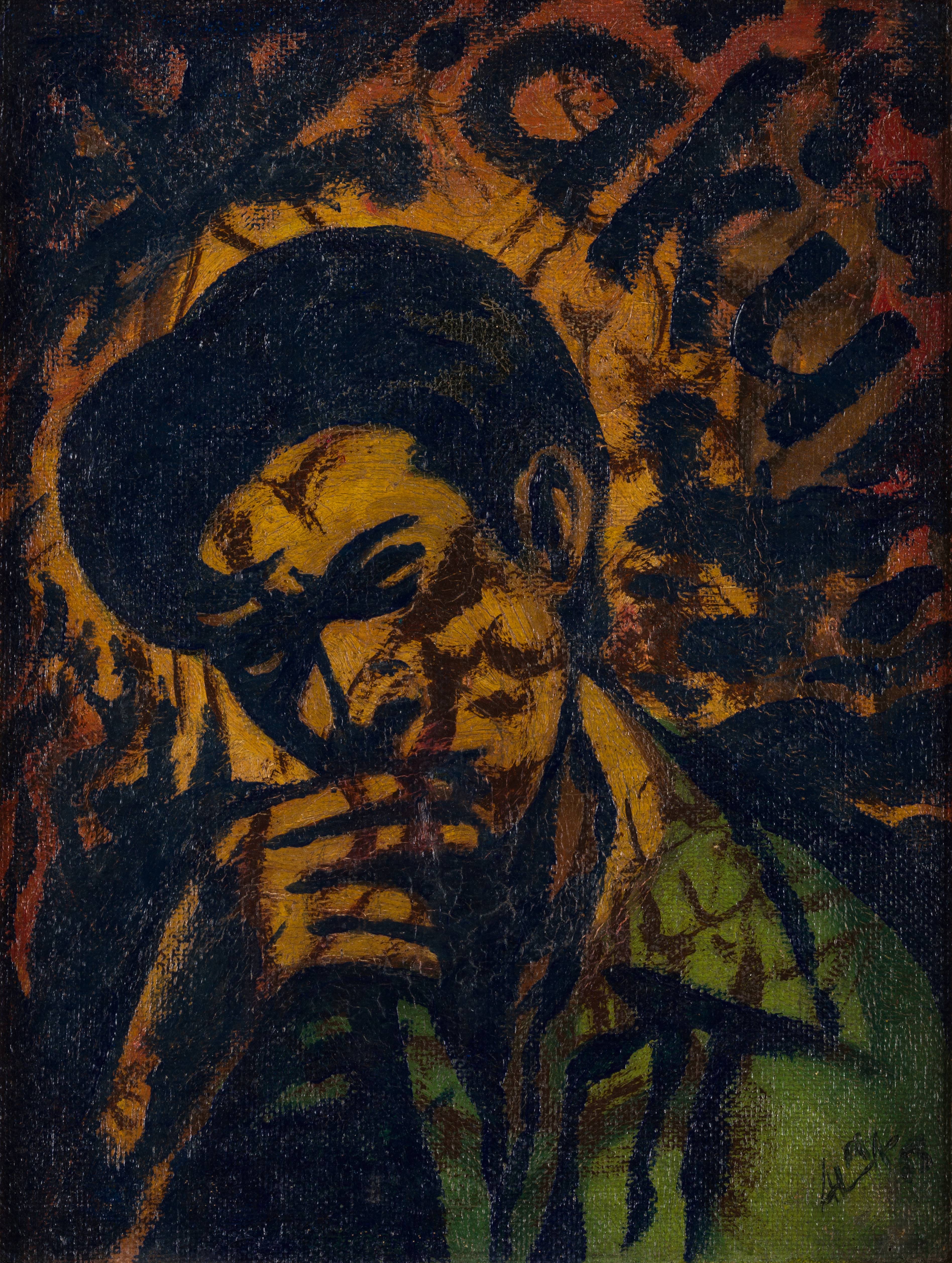 Reflecting on his journey, Latiff Mohidin has said: “It was difficult for me to identify as an “Asian” in the 1960s when there were no familiar cultural anchors within global art dialogues. The consciousness evoked in Pago Pago was my response to this inner struggle, and it offered me a way to put onto canvas the images and ink the words that made up this complex and fascinating region we call Southeast Asia. It is humbling to see these pieces together again, and it is a moving reminder of how far Southeast Asian art has come.”