Preview: Coming Home by The Substation 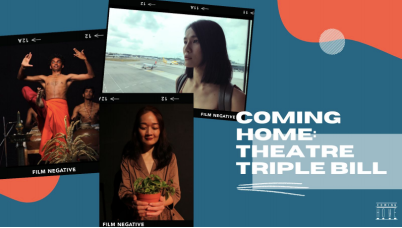 This Friday, The Substation kicks off the first programme of its 2020/21 programme season—Coming Home. Under the new directorship of Raka Maitra and Woon Tien Wei—both who started their artistic careers or benefitted from the programmes at The Substation—the Co-Artistic Directors are now inviting artists, creatives, and allies whose lives have been touched by The Substation to ‘come home’.

Says Woon Tien Wei: “Beyond the physicality of the idea, which is a conscious effort to use every inch of space at Substation to allow meaningful projects to take place, Coming Home is about reminding everyone that ‘home’ is here and still relevant. Coming Home is about bringing The Substation “values” to the world at large. We need to remember that art is more than commodities and spectacles. Art, in its diversity, has agency and potency to affect the world.”

With the ongoing COVID-19 pandemic, the new directors of Singapore’s longest standing arts centre are immediately faced with the challenge of creating meaningful engagements and collaborations in the digital realm. Initially planned as a 3-day weekend programme, Coming Home will now take the form of an online festival. The line-up features artists of the Associate Artist Programme who are selected based on their engagements in collaborative practices and practitioners who are working with The Substation to develop new commissioned works in the later half of the year, such as Lina Yu and Ramith Ramesh who will be developing a piece that explores the notion of stereotypes and fluidity of culture in a globalised world.

Over the last weekend of June, Coming Home will feature a virtual exhibition showcasing the works by artists of the Associate Artist Programme (available here from 26th June); a series of short films, directed and produced by Singaporean filmmaker Russell Morton, that are adapted from three theatre works; and a film industry roundtable where independent players of the Singapore film industry come together to discuss sustainable solutions on how each sector can support independent filmmakers to relieve some of the challenges faced.

One of the highlights of Coming Home is the adaptation of three theatre works into short films. The three works were originally intended to be a theatrical production, however, due to the measures in place for the circuit breaker and the need for arts venues to remain closed, rehearsals had to shut down prematurely and The Substation had to find new ways of presenting the works.

Directed through the cinematic lens of Russell Morton, the writing, direction, design and performance of the three productions are now reinterpreted and presented in three distinct ways: Lina Yu’s The Ecosystem’s script and narrative arc being adapted for the screen, a documentation of a cross-border Kutiyattam performance by Ramith Ramesh in a blackbox and lastly, a collaborative post-production, which will see Russell Morton creating a conceptual piece based on the pre-recorded footages featuring actor Wendy Toh and sound bites provided by Zelda Tatiana Ng.

The interdisciplinary collaboration not only demands a certain openness and flexibility from the artists, but also requires the adaptability of the artists to reconfigure their performance from stage to screen. During the filming process, Intercultural Theatre Institute (ITI) alumnus Lina Yu mentions, “The biggest challenge in the adaptation of the script is to visualise the story-telling through the lens. In the theatre space, we get to breathe and vibe with the audience. On film, we get to play with a mix of images, which adds a different dimension to the piece.”

Says Raka Maitra: “All our plans came to a halt as the world is now faced with a serious pandemic. There was immense pressure to go digital, but how can digital art replace the magic of watching a show in an intimate black box? How about the fervent discussions that follow a show, and conversations which themselves ignite new ideas? We must adapt. We will go online too, but continue to think about how to present it meaningfully, and at the same time, giving the work and art-making process its due respect.”