The trials and tribulations of brown women finding love among the many fish in the sea.

Written by A Yagnya and directed by Rebekah Sangeetha Dorai, Between 5 Cows and the Deep Blue Sea tackles one of the most pressing and contentious issues that Indian people have been facing throughout history – marriage.

As anyone who’s watched Netflix’s hit series Indian Matchmaking will know, love is serious business in the Indian community, and almost always a cause for concern. So for the unmarried, self-described “Singaporean-Indian-Vegetarian-Tam-Bram–Thank-You-Fam-Theatre-Making-20something-Japan-Obsessed-Woman” protagonist of the play, you can be sure that she’s constantly being bombarded by reminders from those around her to get hitched ASAP. 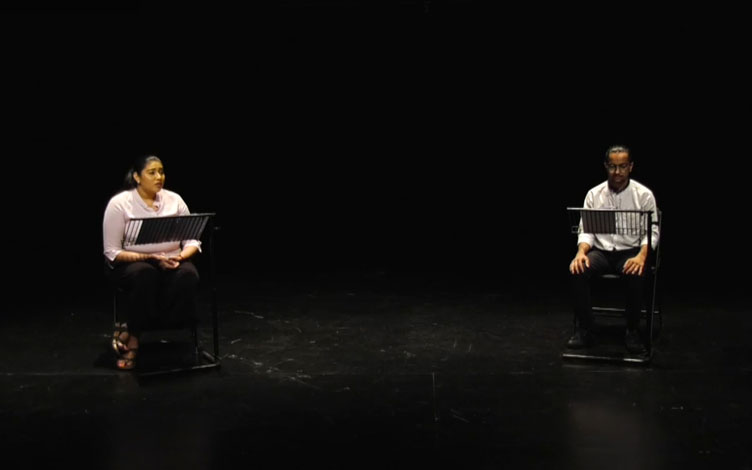 Performed primarily by Sajini, with stage directions and secondary characters performed by Kewel Kartik, as the title of the play suggests, our unnamed protagonist (known only as ‘Girl’) is stuck in a conundrum, struggling to be true to her identity while pleasing her parents as a filial daughter. Opening with a Japanese song titled ‘Hanayome Ningyo’ (literally doll bride), we get the sense that her dating life doesn’t offer much room for independent decision-making, caught in the rolling waves of familial pressure.

Recounting her treacherous, tumultuous journey of online dating and profile matching, Girl uses her unsuccessful (and painfully familiar) dates to highlight the immense expectations placed on an Indian woman, the need for their caste and even their astrological charts to match, or quite simply, the difficulty in finding a guy who’s not a complete douchebag in the polluted sea of men, whether arranged or matched on the ever-increasing number of dating apps. 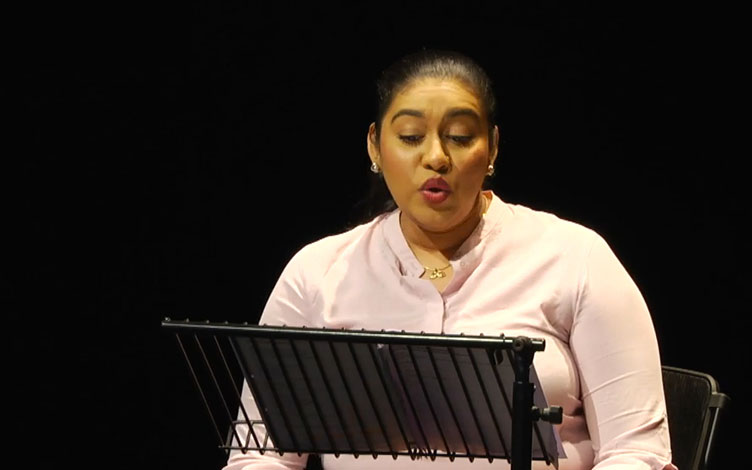 A Yagnya’s script isn’t afraid to question the norms and assumptions of Indian dating, primarily using humour as a means to highlight issues of conservatism, sexism and femininity. Sajini’s performance is magnetic, landing the jokes with pitch perfect facial expressions that tell an entire story by themselves, and the warmth emanating from her performance (and close-ups) help bring her closer to us even with the physical distance, as if she were a friend recalling a bad date to us. Under Rebekah Sangeetha Dorai’s direction, despite it ‘only’ being a dramatised reading, Yagnya’s words and Girl’s character come to life, and makes us excited for when we finally can see a fully staged version.

Between 5 Cows and the Deep Blue Sea is also rife with powerful recurring imagery and themes. A ‘carnage of Barbie dolls’ suggests the damage conservative ideas have wreaked on generations of Indian women, while a Japanese-style game show segment later on reveals an unnerving exercise in sexual humiliation, as she is constantly encouraged to ‘sit on uncle’s lap’. Playing on the links between Japanese and Indian culture, alongside mythology about women and marriage (from the Tanabata legend to Draupadi), Girl comments how she is a mix of so many cultures and traits unusual to an ‘ideal’ Indian woman, and in a particularly powerful scene, invokes a medley of goddesses from both cultures and beyond to show how issues of love go beyond a single culture, affecting women as a whole. 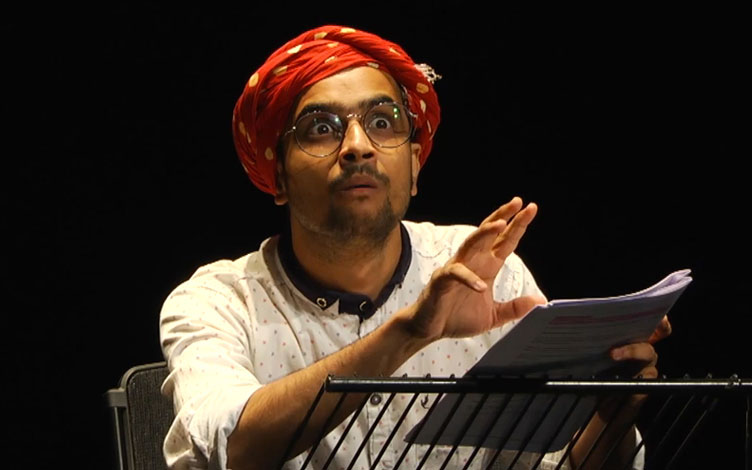 Eventually, it is revealed that beyond the defense mechanism humour provides, Girl wrestles with an ocean of uncertainty about her own identity, and that she has never allowed herself the chance to explore her sexuality out of fear of rocking the boat. The pressure of marriage never leaves until one is actually married, happily or not, within a narrow definition of success. Ultimately, Girl questions the very value of women in the community, recalling an incident where a friend was arbitrarily valued by a stranger at ‘5 cows’ and wonders how many cows celebrities would be worth, or even, herself. Like how Draupadi used in a bet like a piece of property, are women judged by an inherent financial value whose sole purpose is to be married off?

With Between 5 Cows and the Deep Blue Sea, A Yagnya has allowed a simple recount to expand and grow to explore some of society’s biggest unresolved issues today, and the pain and discontent it has caused the people it affects. By the end of the play, while Girl does not get a happy ending (yet), we are left moved by her plight and argument that it’s time to change up our perspectives on love and to stop deciding what women want for them. Relatable, fun and poignant for anyone going through life wondering if marriage is the only endgame, the dramatised reading of Between 5 Cows and the Deep Blue Sea left us impressed by the writing and performance, and a script we hope gets the chance to be staged as a full play soon.

Between 5 Cows and the Deep Blue Sea (Dramatised Reading) is available to watch on YouTube until 11th September 2020. This dramatised reading was filmed in the Esplanade Annexe Studio and is being screened digitally, in place of the live performance which was cancelled due to COVID-19. For more information, visit their website here

0 comments on “Review: Between 5 Cows and the Deep Blue Sea (Dramatised Reading) by Brown Voices”