Esplanade – Theatres on the Bay, Singapore’s national performing arts centre, turns 18 on 12th Oct 2020. Since its opening in 2002, the centre has presented more than 49,000 performances and activities, drawing an audience of 32 million patrons and 112 million visitors. Following the pilot trial performances with live audiences which took place at several arts venues in Singapore including Esplanade in September, the centre looks forward to welcoming everyone back at #mydurian again.

While live performances with audiences are still not allowed, there’s hope yet, as the Esplanade begins re-opening its various spaces this October, just in time for its birthday. PIP’s PLAYbox, Esplanade’s dedicated space for children and families, and Jendela (Visual Arts Space) will re-open from 9th and 16th October 2020 respectively. Esplanade’s daily guided tours will also resume from 15th Oct 2020. As part of the anniversary celebrations, Esplanade will be launching two specially curated limited edition tours: a Family Tour & Play Date (where the little ones will receive a PIP’s watch) and a Night Tour which includes dinner at a participating Esplanade Mall tenant and a special collection #mydurian tote bag. In addition, free virtual tours on will also be available for those who prefer to experience and explore our venues from the comfort and safety of home. The Esplanade Mall and public spaces including the waterfront, Roof Terrace and Forecourt Garden, and facilities such as toilets and basement carpark, remain open and accessible to all visitors and patrons.

While audiences are still unable to watch live performances at Esplanade, they can continue to enjoy the arts from home with Esplanade Offstage. Launched in October 2019, this one-year-old multimedia platform has had close to 200,000 total users and garnered some 405,000 total page views, and continues to be an all-access backstage pass to the arts and performances at Esplanade, demystifying the performing arts in Singapore and Asia for newcomers as well as offering more in-depth perspectives and resources for art enthusiasts. Over the past year, Offstage has released more than 200 videos of performances and performing arts content as well as related podcasts, features, quizzes and educational resources.

Ongoing and upcoming Esplanade Offstage offerings to look forward to through the month of October include daily Free Programmes, children’s festival Octoburst! Online till 18th Oct 2020 and thought-provoking digital programmes at da:ns festival 2020 from 12th to 31st October 2020. 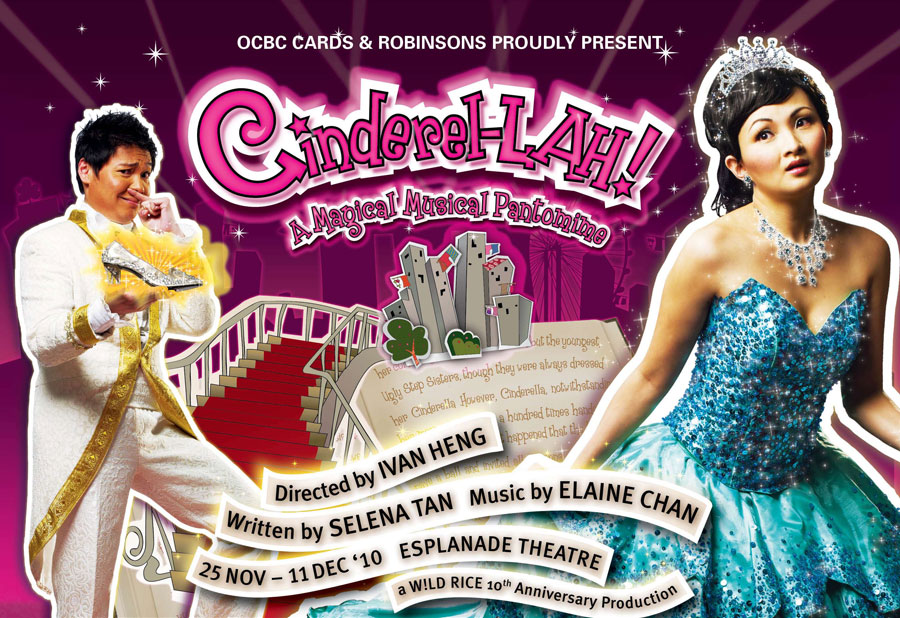 Cinderel-lah! at the Esplanade in 2010

Also premiering on Esplanade Offstage on 1st Nov 2020, Sun, 3pm, is Lights Up! which is presented by Esplanade in collaboration with Dream Academy with support from the National Arts Council (NAC). Filmed in the Esplanade Theatre from 12th to 14th October 2020, this production features more than 35 freelance artists, musicians, creatives, filming and technical crew, and is part of a package of support measures for arts freelancers put together by NAC during the pandemic.

The 45-minute revue features Singapore’s veteran and emerging artists such as Sebastian Tan, Dwayne Lau and Hana Rosli who will perform their renditions of Selena Tan and Elaine Chan’s classic musical theatre creations from Dim Sum Dollies, SING DOLLAR! and CINDEREL-LAH!.  Says Selena Tan, Founder Artistic Director, Dream Academy: “Elaine and I have been writing songs together since secondary school, but this is the first time our songs will be reinterpreted by other artists. We hope Lights Up! will put a spotlight on local theatre as well as the talented emerging artists featured.”

Yvonne Tham, Chief Executive Officer, The Esplanade Co Ltd, comments: “As Esplanade turns 18, we are excited to re-open all of our spaces safely and launch newly-designed tours around our venues. Last month the pilot trial performances not only cheered those who attended but gave us encouraging feedback. A vast majority of the respondents were very satisfied and extremely confident of Esplanade’s safe management measures, and ready to return to watching live performances.”

“The past months have also challenged us and artists to innovate. We introduced so many different forms of digital programmes and activities to engage, uplift and inspire people. Many of these will continue, even as live performances resume. Esplanade turning 18 in such times reminds me that the arts are integral to an individual and a society’s resilience. I am grateful that many supporters and donors have stood by the arts, and I am confident that how artists, audiences and Esplanade respond to these challenging times will be testament of that resilience.”

The Esplanade turns 18 on 12th October 2020. Support them with a birthday gift at www.giving.sg/esplanade/artsforchange. Dream Academy’s Lights Up! premieres on 1st November 2020, 3pm for free here Find out what else is happening at the Esplanade here