With the work from home and circuit breaker measures in place over the last few months, most of us are already familiar with dragging ourselves out of bed to attend the next Zoom meeting, only to find ourselves ‘waiting for the host’, bemoaning how we could have slept in just a little more. It’s no wonder then that it’s already the subject (and title) of a brand new play written specifically to be performed on Zoom, one that local theatre company Pangdemonium will be premiering in Singapore this week.

In speaking to founding co-artistic directors and dynamic husband-wife duo Adrian and Tracie Pang, the journey to get here hasn’t been an easy one, not just for them, but for the entire performing arts scene, both in Singapore and the world. While they started the year strong with a stellar production of Florian Zeller’s The Son February, it quickly became clear that plans for the remainder of their 10th anniversary season were going out the window, as the restrictions on performing arts continued, with no sign of theatres opening their doors anytime soon. “It’s been a bit of a roller coaster for us over the last six months,” says Tracie, in a Zoom conference call from London. “At first we thought it would be just temporary, and we could just tell audiences to look forward to our next show. But then things took a nosedive as it dragged on and we had to cancel our next show as well.” 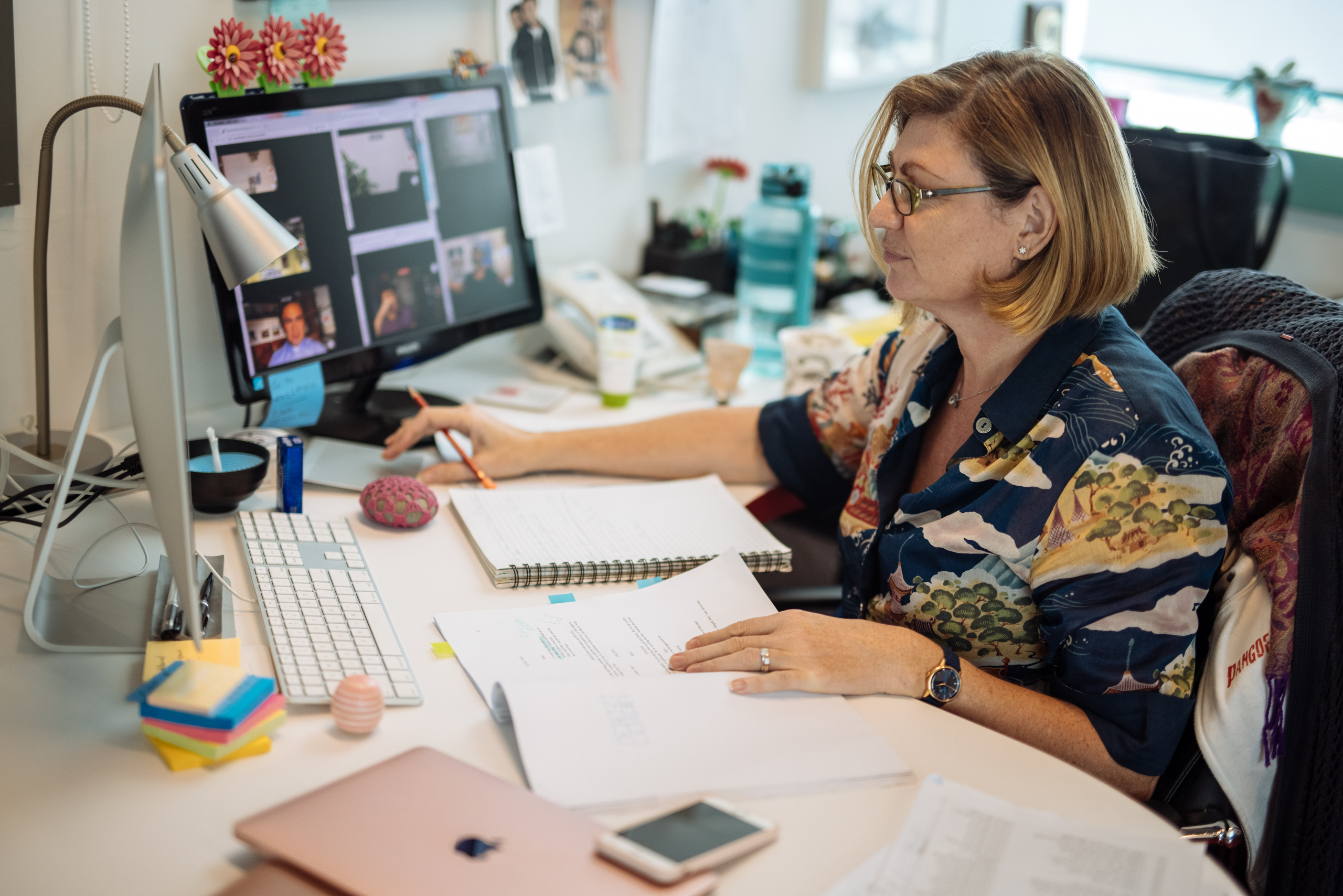 Over the last few months, in a bid to help the struggling performing arts scene, the National Arts Council (NAC) rolled out the Digital Presentation Grant (DPG) to encourage artists to turn to the online world as a safe, alternative way of presenting new work. Pangdemonium, however, was initially resistant to the idea. “We were quite reluctant to respond to call to go digital as well, because to us, it felt almost like it was going against what we stood for as a theatre company, compared to say television and film companies who actually specialised in such work,” says Tracie. “This period has been a journey for us, both personally and as a company, learning and growing and adapting to what we’ve had to deal with. Working on The Pitch with SRT and Wild Rice gave us an injection of energy and something to work towards, and being able to work is what gives us the positivity we needed.”

“Of course as an artist, it’s a good time to learn new things, but I still want to go back to the theatre, and going digital is just an interim measure and not the future, at least for Pangdemonium, and perhaps inform some of our future work,” she adds. “Waiting For The Host was a natural next step for us because it was written specifically for digital presentation. As a seven-hander, we weren’t just presenting a series of monologues, but really putting on a play where a group of people were communicating with each other and the audience to tell a story.” 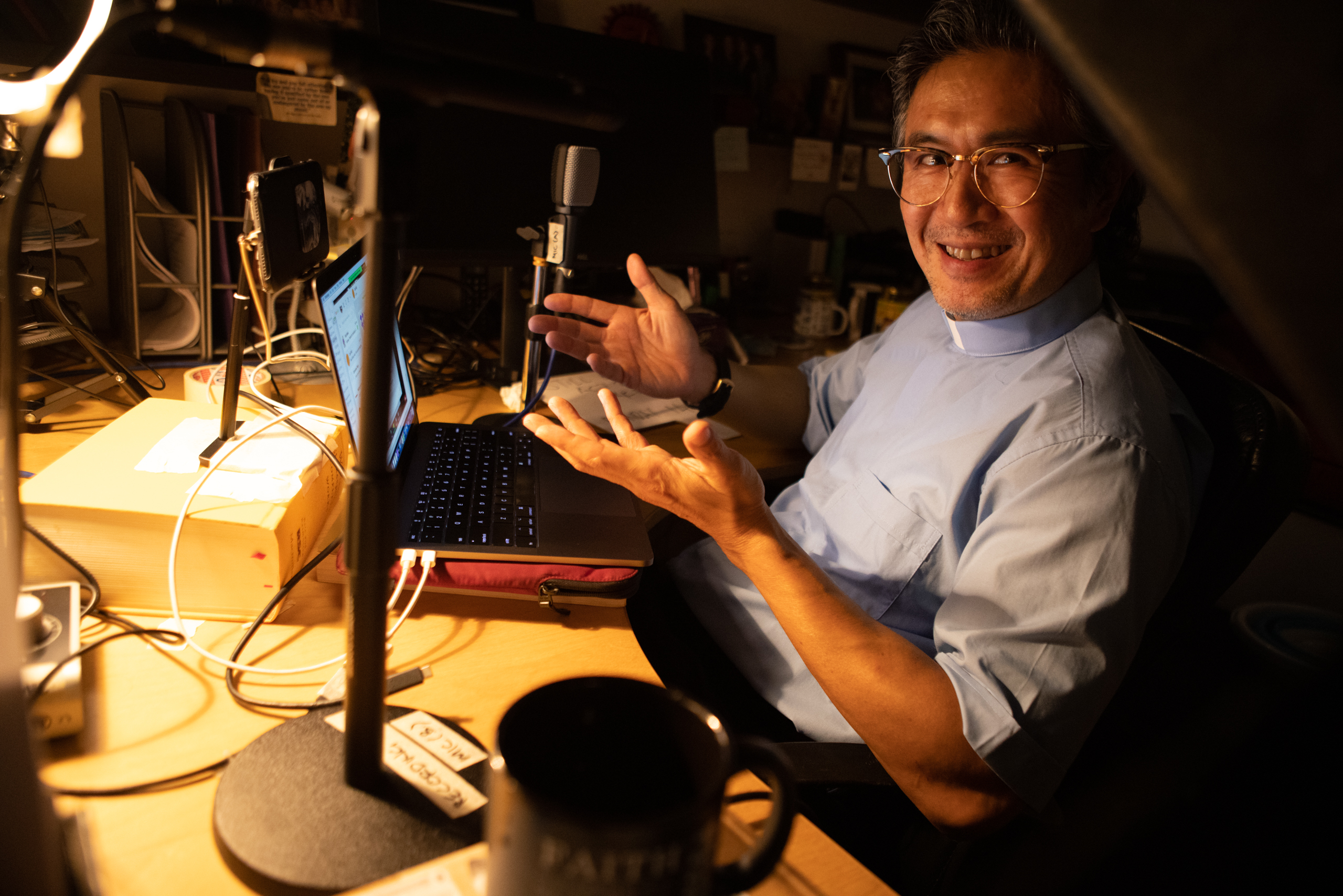 Adrian adds his own story to it all, elaborating on the personal difficulties he went through during this period. “This was a tricky time for all of us, and I really struggled to get on with the day or find motivation because every plan we made, it would fall through, like being slapped in the face time and time again,” says Adrian. “I felt robbed of our company’s mission. It’s really because of Tracie and the boys, and having reached out for help with mental health that I got through it.”

“While the path ahead is still difficult, I came to the realisation that we had change, adapt and evolve. It’s almost ironic how our 2020 season was themed ‘evolution’, and the pandemic has forced us all to enter a heightened rate of evolution, in a way, survival of the fittest,” he continues. “We thought the phrase ‘going digital’ was a bad word for the first few months and were resistant, but eventually decided we had to pick up the pieces we could and re-energise ourselves to do what we could to get by. Waiting For The Host acts as a kind of lifebuoy for us, to allow us to continue telling stories through theatre even in these crazy times.” 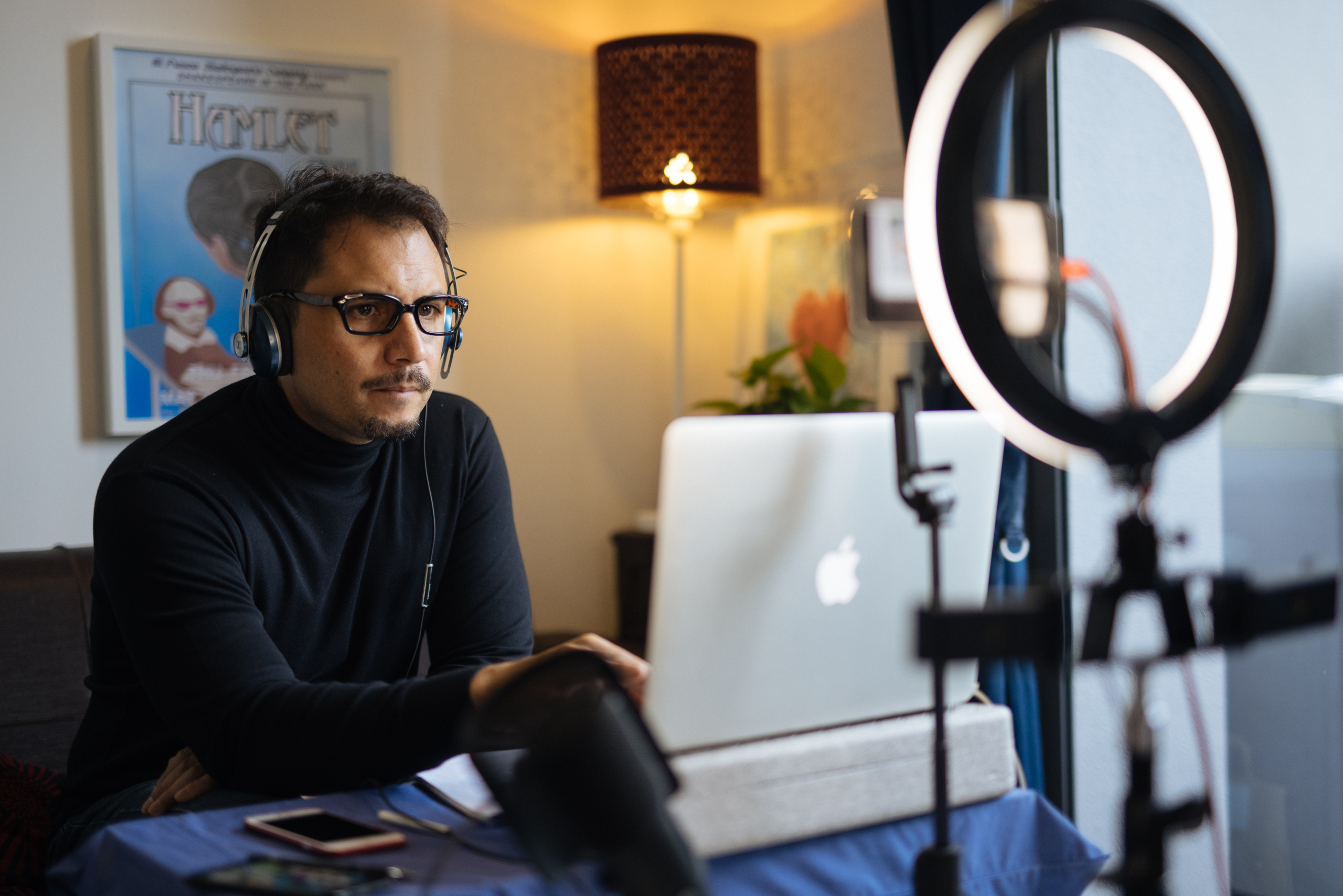 Waiting For The Host is one of the newest plays of 2020, written by Marc Palmieri during the pandemic and specifically to be performed and enjoyed online, on Zoom. The play itself follows a group of amateur theatremakers attempting to stage a Passion Play online, and resulting antics from socially distanced, virtual rehearsals, and drama amongst the colourful cast of seven. Pangdemonium’s version is directed by Tracie, and stars Adrian, alongside their son Zachary, as well as Mina Kaye, Neo Swee Lin, Petrina Kow, Adrian Pang, Gavin Yap, and Keagan Kang. 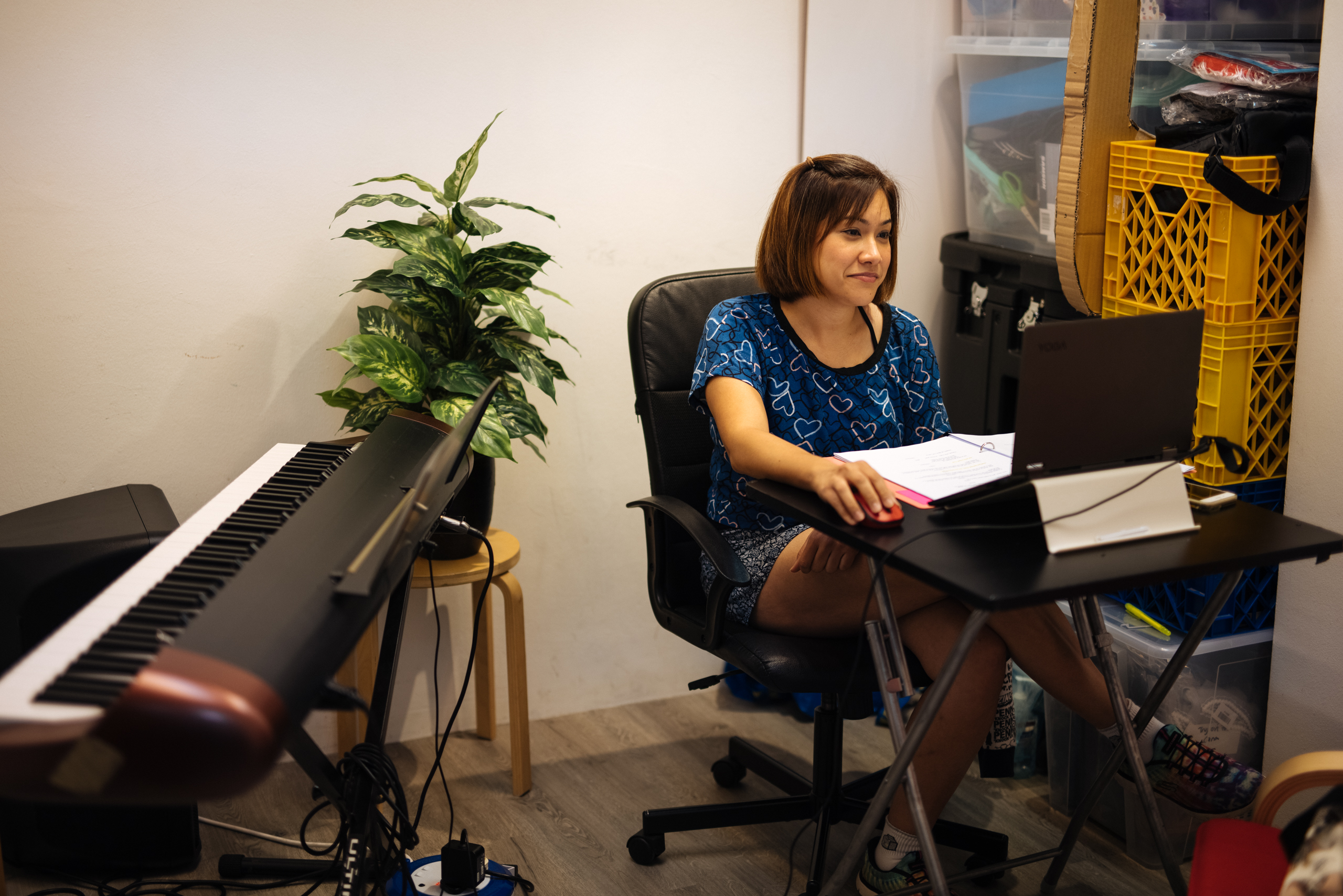 Most significantly, Waiting For The Host will not be performed live, rather, it was pre-recorded and edited, with the primary reason being the fear of losing connection and the countless quality control issues. “We experimented with doing Waiting For The Host live at first, but it very quickly became evident that it was impossible to do that,” Adrian explains. “Seven actors, a director, a tech team, all in different locations and at the mercy of their respective connection strength and camera quality, that makes it a potentially erratic show. Even beyond connectivity, there’ might be issues with the camerawork, and while we understand the limitations of technology, we didn’t want our work to end up that way. That’s why we pre-recorded it, to ensure high audiovisual quality, and the ability to edit it properly and craft a work we would be proud of. Plus, we also included several storytelling elements to the piece that require complex technicalities, so that’s how we ultimately arrived at this decision.” 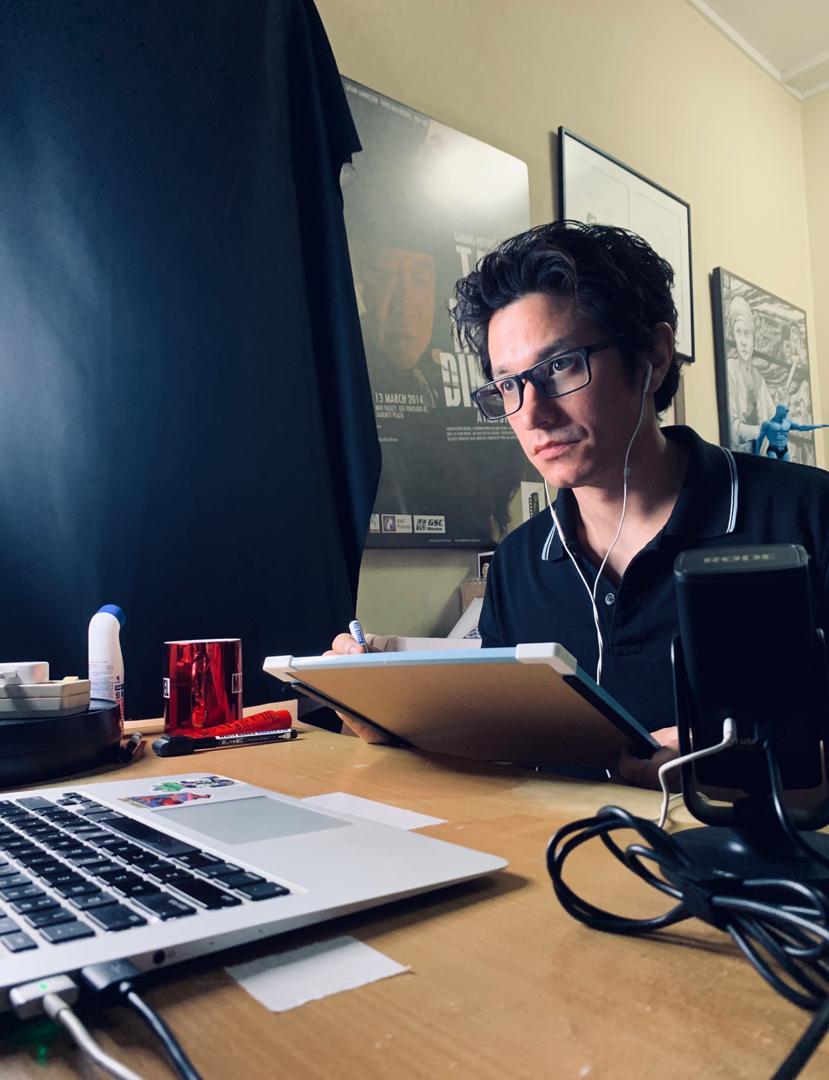 “Sure, it would have been great to get the entire cast in one space to ensure they’re all on the same network, but there were so many elements involved in that too,” Tracie adds. “Since we’re charging money for a ticket, we needed to ensure the work we put out was of quality, and find the middle ground between a quality production and the ‘theatre’ element that makes sure people will be paying for a product they can appreciate.”

In choosing the play, not only did Pangdemonium pick Waiting For The Host based on its performability online, but also because of its narrative and the message they sought to bring across. “It was very different from anything we’ve done before. We wanted to pick something that was humourous to lift our spirits during this dark time, something people could relate to,” comments Tracie. “It was a very moving play, and deals with elements of faith. There’s something in there to cling to, believe in, and regardless of whether you’re religious or not, and to get that sense of community at the end of it hoping for better days ahead, something that felt right for us.” 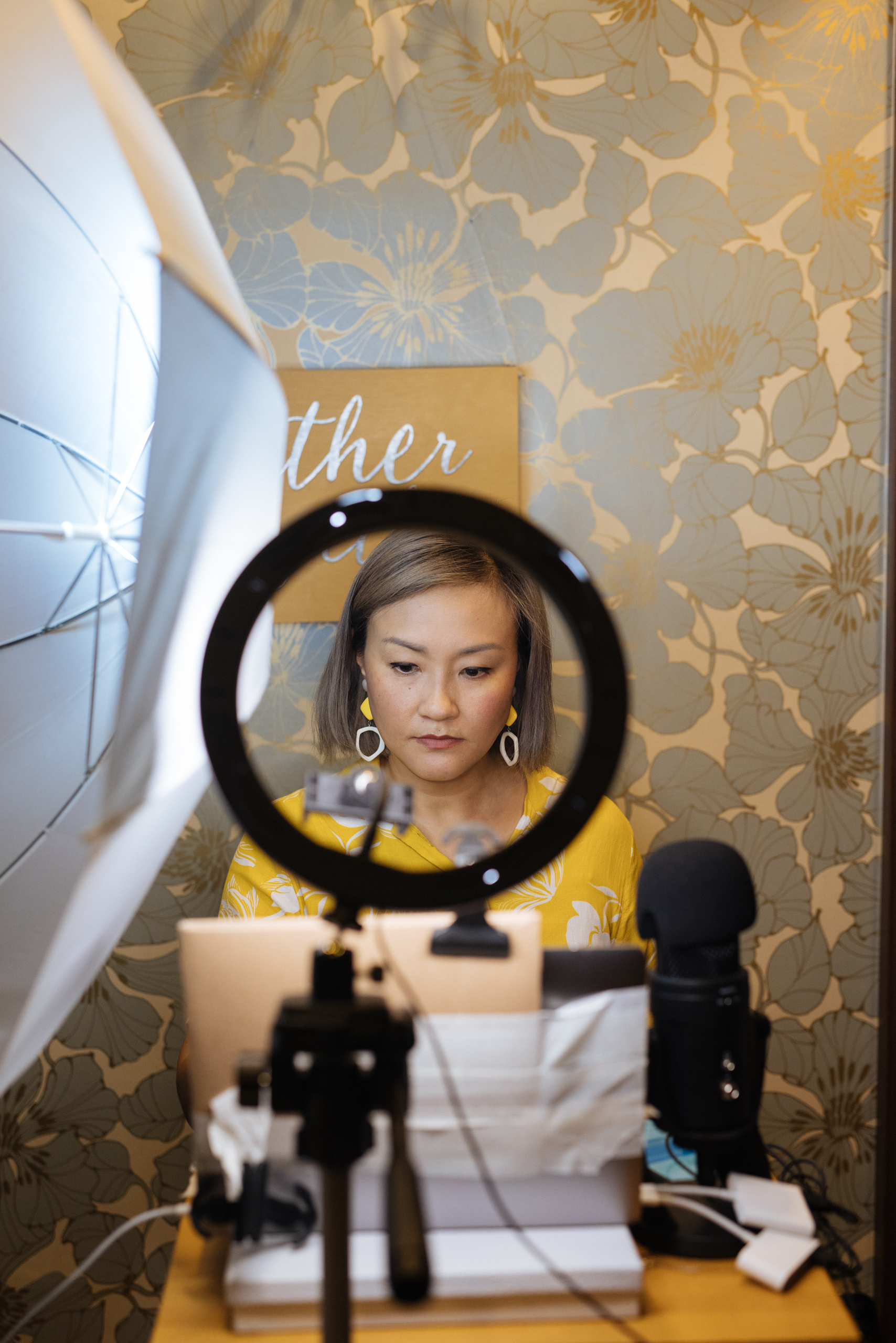 “It’s a very meta play too, as a play within a play by an amateur theatre group putting up a play online because it’s the only thing they can do – something we understand very well,” adds Adrian. “When we contacted Marc (Palmieri), he was really sweet about it too when we told him we were thinking of adapting it, and he replied that he do anything he could to help, and was very positive about it.”

“As for the characters, in reading them, you get a very clear idea of who they are in the context Marc wrote them. I suspect they’re all people he knows in real life. When we were casting it, we were going oh this character must be played by Gavin, this one by Swee Lin and this one by Petrina. All the characters are quintessentially, recognizably Singaporean, and hopefully it translates to the play as well, in this story we’re telling.”

“I was positive it had to be Petrina, because even though we’ve never worked with her before, we knew she was absolutely right for it,” adds Tracie. “But I’ve known her for years and we have a lot of mutual friends. There’s something about Petrina personally who has such a positive spirit about her, and I wanted somebody like that for this character, nothing fazes her and I thought that’s what we need. And to be honest, not many actors are like that!” 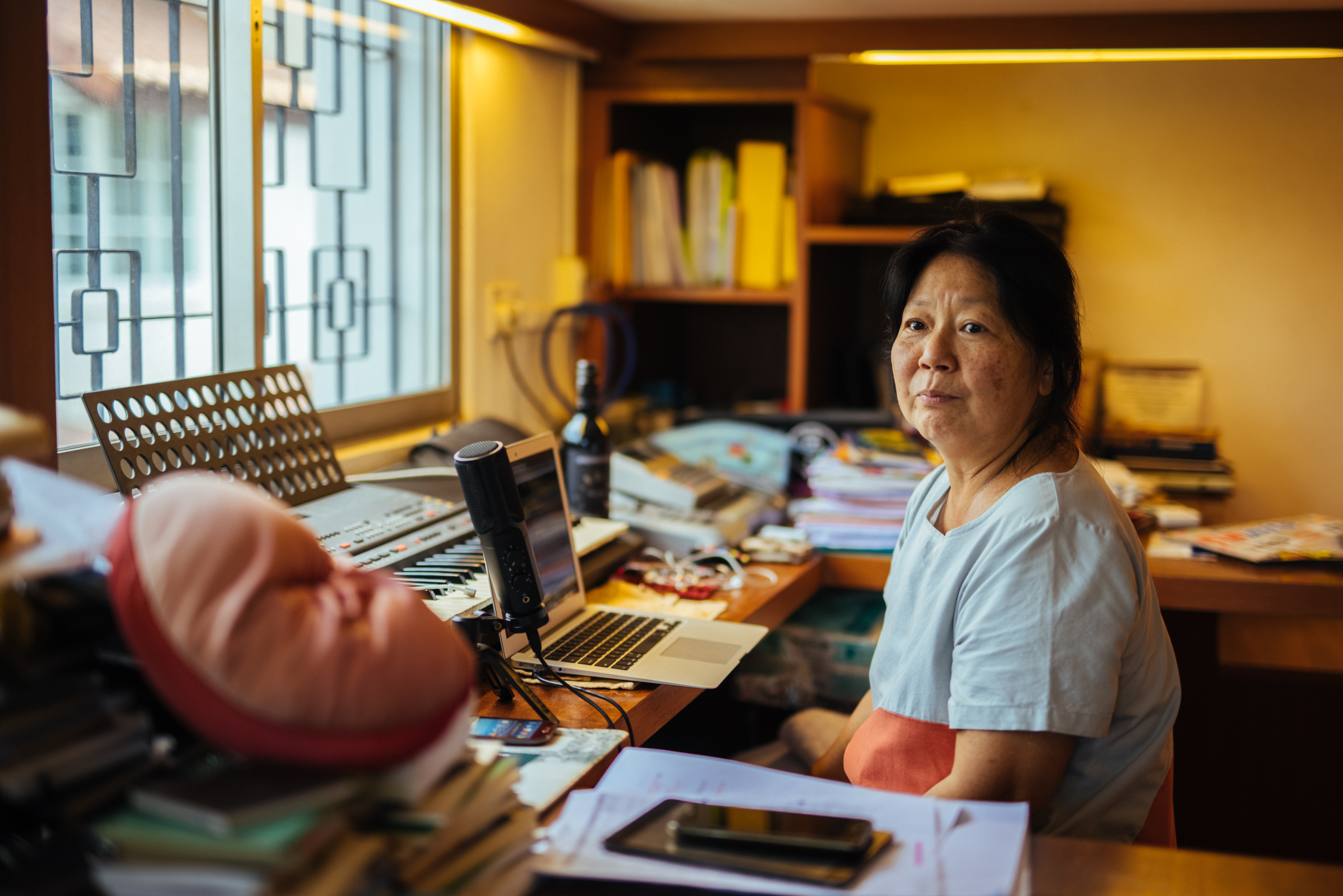 In the meantime, both SRT and Wild Rice have announced live shows again come November, re-opening both the KC Arts Centre and Ngee Ann Kongsi Theatre at Funan respectively. While Pangdemonium will not be following suit for now, they welcome their fellow theatre giants to proceed with it. “Because they have their own venues, it’s in SRT and Wild Rice’s best interests to stage their shows again as soon as possible. And I see it as a good thing, because it’s pushing the needle, to test the water and see if everyone’s comfortable enough to head back to the theatres,” says Adrian.

While their initial season for the year fell through, Pangdemonium isn’t opposed to staging them if the opportunity arises next year, currently planning to produce both The Glass Menagerie and The Full Monty with the same cast, should circumstances allow. “It’s wholly on how the measures change, and of course, we can’t extend the rights to it forever,” says Tracie. “If it has to be pushed beyond that, we’d have to recast and find actors who can do the plays justice. There’s a lot of uncertainty right now, and that’s why we haven’t launched our 2021 season ticket either, because it’s all up in the air. You can’t expect people to commit to buying a ticket when the season has yet to materialise, and for the first time in years, we’re really going to do things one play at a time, and hopefully, by the end of 2021, have a solid plan and season ticket we can roll out for 2022.” 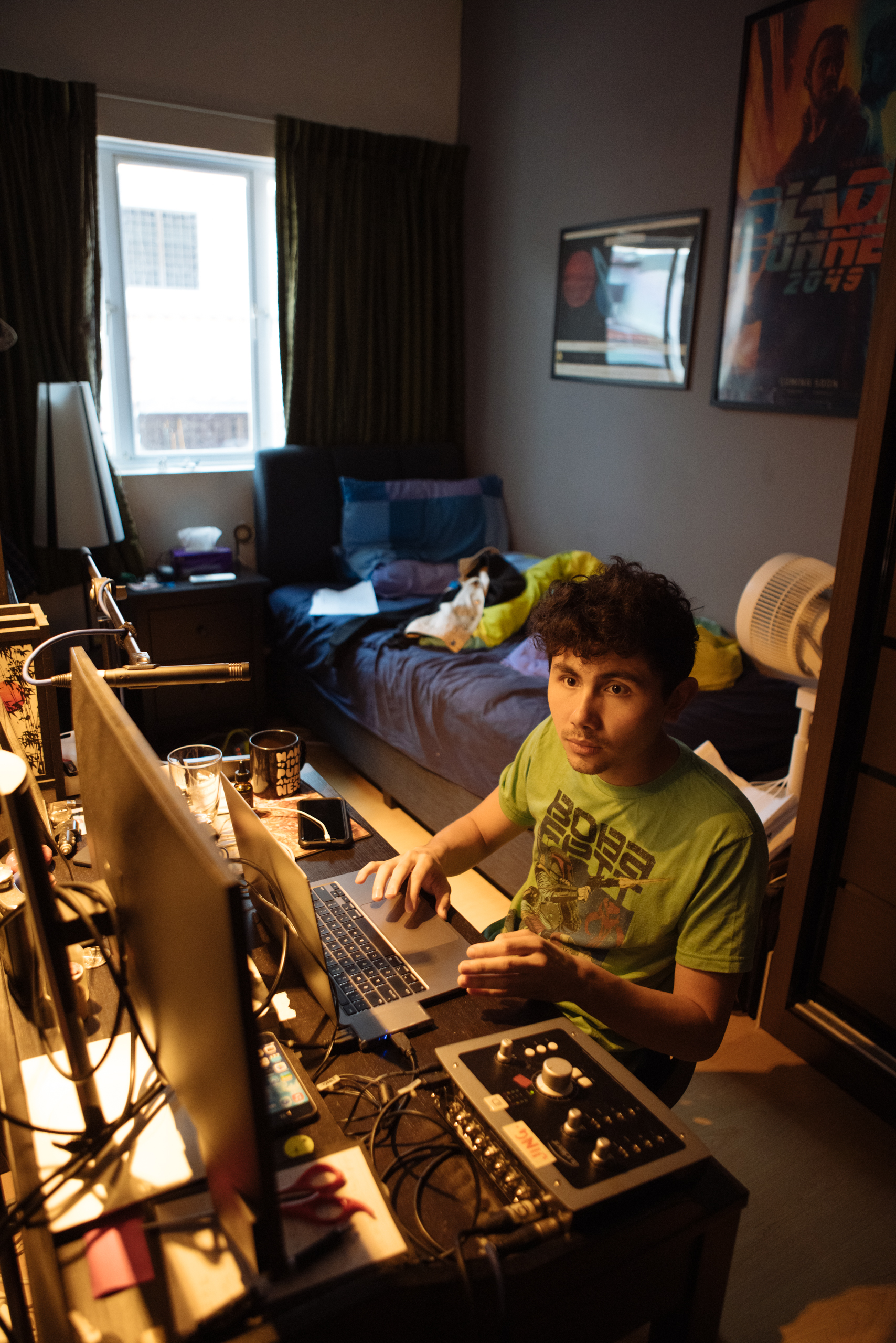 Things do seem to be looking up for the Pangs. For one thing, their son Zachary (last seen in The Son) is now in London pursuing higher education, with Tracie helping him with the move. “It’s been a wonderful journey for us as a family and as a company to do this last project together (Waiting For The Host) before he went away for university,” says Tracie. “He’s going through is own personal journey of fear and trepidation going to a new country, and I was in two minds whether to go with him or not, what with the COVID-19 risk and the compulsory quarantine on either end. But choosing to go with him was ultimately a good idea, helping him acclimatise and move into his halls of residence, and knowing he’s becoming part of this community.”

“For now though, Waiting For The Host is mostly a move that’s all about embracing this age and production, and to be willing to experiment. We’ve still got a bit of trepidation and have no idea how it’ll be received,” Adrian concludes. “There’s always a lot of pressure, but I hope that this show resonates with audiences, as it resonated with us. That’s how we’ve always done things here at Pangdemonium, pandemic or not.”

Waiting For The Host will be streamed online via SISTIC LIVE every Thursday to Sunday, from 15th October to 1st November 2020. Tickets available here

0 comments on “The Banter: Tracie and Adrian Pang talk about Pangdemonium in a pandemic”