For a play that’s titled The Son, it’s interesting how it ends up becoming a show that reveals far less about the eponymous son than it does about the people surrounding him. In Pangdemonium’s latest production, Nicolas (Zachary Pang), a troubled 16-year old, seems to be undergoing problems far bigger than the usual dose of teenage angst. His recently divorced parents Anne (Shona Benson) and Pierre (Adrian Pang), and Pierre’s new wife Sofia (Sharda Harrison) have no idea what’s wrong with him. But as the days go by, it becomes clear that there is something truly terrible affecting him, as they struggle to find a solution to save him.

Written by Florian Zeller and directed by Tracie Pang, The Son is a play that brings to light the struggles of teenagers today, and the increasingly difficult task of parenthood in dealing with these struggles. At the heart of the play is Nicolas, whose steadily declining mental health is the catalyst for everything that happens in the play. Initially just a shy, sullen boy who keeps to himself, it’s not long before his condition leads him to lock himself up in his room, escalating into self-harm and suicide ideation. These are concepts bewildering to the adults in the play who simply cannot understand why he’d resort to such acts. While there are times one feels the Nicolas’s range and depth of emotion is limited by the script, Zachary manages to execute the role well, his actions feeling completely natural as he shirks into corners, ghost-like as he hides away from the world. 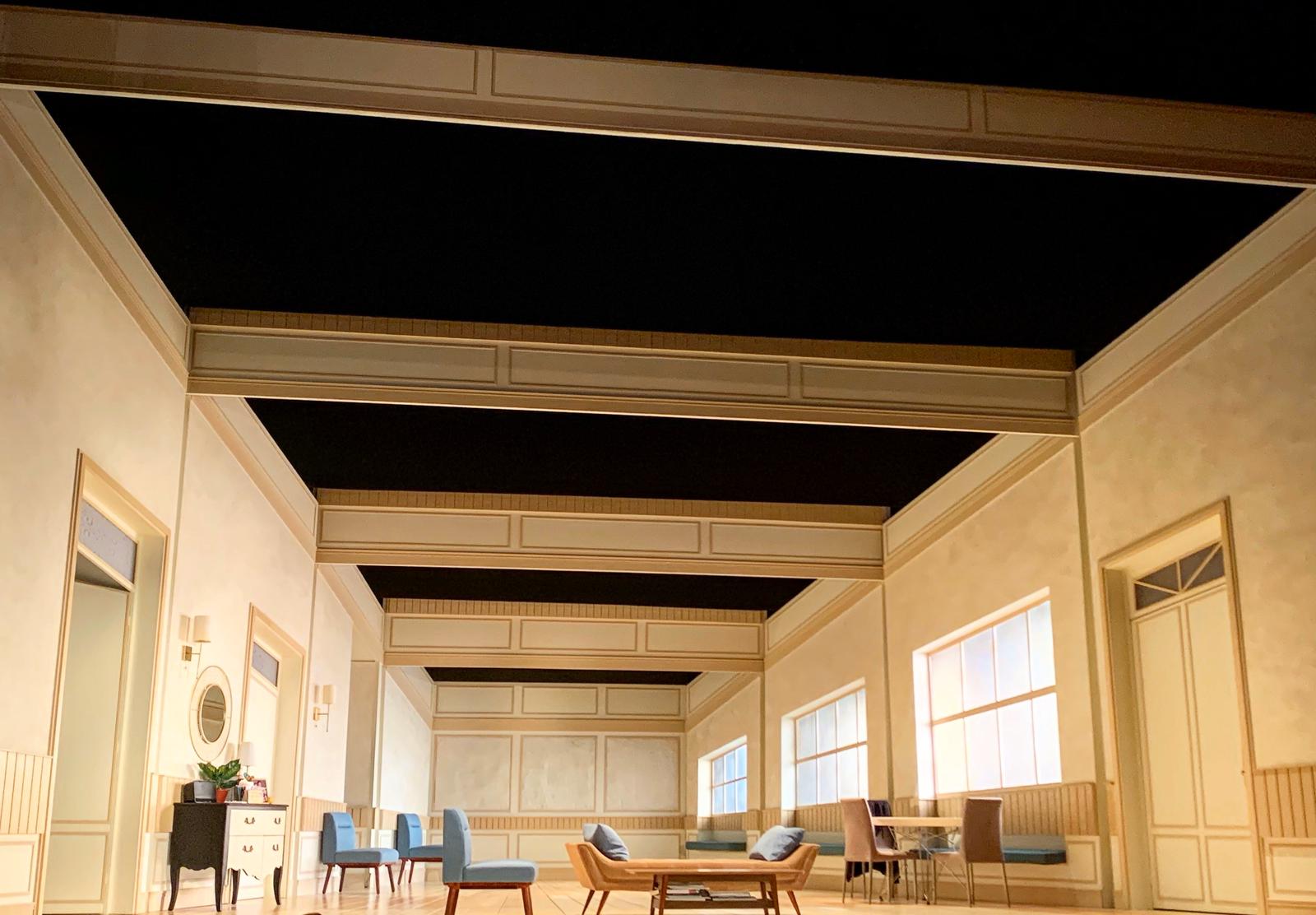 The Son features a deep, multifaceted set by Petrina Dawn Tan, with walls slanting towards the back, operating like a concave lens to focus our attention on the back of the stage. This brings us to the start of the show, as Nicolas scribbles frantically on the back wall, where the blocking allows the set to create an optical illusion making him look physically larger than life. This suggests how everything in the play ends up revolving around him and his condition.

The set also separates the space into four distinct rooms, each one well-defined and representing other aspects of each character’s psyche. Anne’s house, for instance, placed at the forefront of the stage, seems to represent how Nicolas is at the centre of her life, with a wall in the middle of the room adorned with photos of him. On the other hand, Pierre’s house instead displays three paintings instead of photos. The paintings depict fractured circles on the brink of bursting, a hypnotic spiral and a trypophobia-inducing group of dots, each one suggestive of how he might be feeling about his son. In addition, Leonard Augustine Choo’s costumes seamlessly fit into every scene, with a selection of sweaters, scarves, blazers and hoodies to represent the play’s wintry London setting, stylish but never overpowering. These help us imagine the chilly, gloomy weather, adding to the dour mood of the play, and another potential reason for Nicolas’s condition deteriorating.

The tragedy of The Son isn’t so much that Nicolas is in pain, but that his own parents are unable to protect him from harm or recognize the depth of his suffering. When we first meet Nicolas, an exasperated Pierre lectures him on his unusual behavior, from lies to truancy. In their later interactions, be it choosing an ill-advised gift for him or lamenting about how things were different back in his day, the generation gap between them becomes clear, and shows his inability to understand what Nicolas is going through and connect with him. It’s no wonder then that when Nicolas metaphorically displays his frustration by violently overturning the contents of a drawer, Pierre completely fails to notice this, blind to his own son’s cry for help as he buries himself in work.

In casting his own son as Nicolas, the onstage chemistry between Adrian and Zachary possesses a strong sense of realism. Each time they face off against one another, there is a distinct sense of history between them, as their performances are informed by years of actually living together, with a palpable tension between them likely to have been experienced between them in real life at some point. When Nicolas closes himself off, answering only in vague sentences, we see Pierre’s face fall as he realizes the pain of no longer recognizing the person his own child has become. While there are times Zeller’s script feels lacking, with certain characters feeling extraneous and underdeveloped, with Adrian and Zachary’s strong chemistry and stellar performances, both Pierre and Nicolas’s lines are somehow given more weight and remain impactful.

That’s not to say the play doesn’t have its moments of hope, such as when Pierre demonstrates a slightly-embarrassing, hip-thrusting dance move that puts a smile on Nicolas’s face, even getting him and Sofia to join in, and the trio briefly feel like a real, happy family. As for Sofia, despite her impression of Nicolas as being ‘ultra-weird’, she does genuinely try to reach out and include him into her daily routine, from waking him up for school to addressing his difficult, existential questions. In her performance, actress Sharda Harrison achieves a careful balance between ‘evil stepmother’ and sympathetic wife, even cleaning up the ‘mess’ that Nicolas has left, as if picking up the pieces in this broken family. Throughout the play, despite coming in and out of scenes so often, Sharda maintains a consistent energy that lights up the room each time she comes onstage, nailing each and every one of her lines and making them her own, instantly capturing Sofia’s emotions and intent with her words.

While the vignette-like style of the play does not give enough time for most of the characters’ personalities and problems to really sink in, making it difficult to feel sympathy for most of them, Tracie Pang manages to capitalise on the dramatic moments to deliver maximum impact and emotion. In one of the most powerful scenes, the underlying emotions and frustrations built up over the course of the play eventually erupt as Pierre lashes out and physically hurts Nicolas. But as he looks at his cowering son, he is immediately filled with regret, realising he is no better than his own absent father at parenting his own child. When Nicolas is admitted to the hospital later on, compared to all the noise and disruption felt throughout the rest of the play, the hospital’s almost eerie quietude stands in stark contrast. It feels almost like a facade of peace, the calm before the storm, and we cannot bring ourselves to believe that things might get better.

Towards the end, audience members are taken on an emotional roller coaster that makes us feel relief, shock, surprise and pain in quick succession. Tracie Pang skillfully executes Florian Zeller’s whiplash-inducing twists, and as we watch the characters slip in and out of fantasy and reality, we think about how these sudden shifts mimic the highs and lows of mental conditions, and we are left feeling uncomfortable and confused by the unpredictability of life.

As the opener to Pangdemonium!’s 10th anniversary, The Son sets a strong precedent for the rest of the season with its reminder about the difficulty of navigating familial relationships. The Son is a poignant play shedding light on the ever-increasing problem of mental health issues in society, and leaves an indelible mark on us with its message that sometimes, we have to admit that love alone isn’t enough, and seek professional help before it’s too late.

The Son plays from 20th February to 7th March 2020 at the Drama Centre Theatre. Tickets available from SISTIC