Taking place on a Sunday evening, it was raining heavily outside, but the music that kept us warm later on, as we settled into the Stamford Arts Centre black box for Ding Yi Music Company’s first live concert since the circuit breaker. Taking on a rather interesting format to comply with safe distancing rules, Together We Stand, Live Again! featured musicians lining up the space, keeping as close to us as safely possible, while providing a ‘surround sound’ effect. Even the woodwind instrument players were seated in glass boxes to prevent vapour from their mouths from reaching the audience, evidence of how much effort the company put in to ensure the safety of the audience and musicians alike.

We started the evening with the aptly titled ‘Thunder in Drought’. The piece started with birds singing, before the melody takes over. With the music showing a lot of flair, the ensemble shines when the musicians come together and showcase their chemistry in their sound, with the music complementing the mood, and was the perfect opening to get us in the mood for the concert ahead.

In the next piece, ‘Spring Wind’, the music starts out with a melody evoking the feeling of the oncoming spring season, thanks to the erhus. The ruan then plays the melody that comes after gave me a spring in my step, while the double bass and yangqin came in playing a deep melody. The guzheng lends a lightness to the piece, which when combined with the cello, seemed to show an affirmation of the spirit, grounding us in the new season. Seated in the middle of the stage was a prime position giving me the best feel of the music and mood. As it all came together in the end, they began to repeat the last stanza of the melody, almost to remind us that of the spring wind, as the chiming of the bells heralded the arrival of spring.

Before they began playing their next piece, we were shown a video montage paying tribute to the older generation of Singaporeans who’ve faced a tough time during the pandemic, with the next piece, a medley of Hakka folk songs, paying tribute to them in an attempt to lift their morale. Songs can always be relied on to bring the older generation together, often seeing large groups gathered together to listen during getai or Chinese opera. It is these familiar tunes that remind them about the togetherness and love they have for each other, with this medley acting as encouragement to them to keep going and stay strong despite the odds.

Seeing the clearly marked safe distancing indicators on the floor reminded us once again of the strange times we were living in, and how we’ve had one of the most difficult years in the arts. For me, it was just a real privilege to be back in the theatre and listening to live music once again. Conductor Quek Ling Kiong then adds how things have changed, and how important audience members are to the company. This is essentially what chamber music is all about, allowing its intimate form to bring out the full power of the music to audiences, something that Ding Yi always excels in.

Like receiving a warm embrace, it seemed that Dingyi had found its voice in this piece. The dizi started the piece off, the guzheng and yangqin lead the instrumentation, and the drums provided the under melody. The running melody of the erhu added a lightness to the piece, while the double bass almost affirms the melody. With a frantic finish to the piece, there is almost a sense triumph during this time of chaos. It is at this point, I have to reiterate that it was such a privilege to have had 18 musicians playing for us, with both Quek Ling Kiong and Dedric Wong there to lead the orchestra. While Dingyi might have been using a 360 degree software, I had a complete 360 degree view from where I was seated.

We then moved on to a song, ‘Our Singapore’, as arranged by Kok Jun. Before the piece, Ding Yi presented a video reminding us of all we had gone through in the last few months, an emotional moment that reminded us once again how just being back in the theatre today was worth celebrating. The music allowed us the space to reflect, and think about how as things are coming back to normal, we’ve learnt how strong we are when we come together, slowly but surely able to overcome this together as One Singapore. The song began with the main beat from the drums and percussions. The double bass and cello formed strong, affirmative beats, an unusual composition that allowed the Chinese instruments to shine, and emanate grandeur.

As the whole chamber comes in, we could imagine a montage of everyone living in Singapore, forming a musical tapestry of Singapore culture, going from traditional folk song ‘Lenggang Kankung’, to Tamil classic ‘Munneru Valiba’, to the Eurasian ‘Jinkli Nona’. The introduction of the Chinese instruments, especially the guzheng and woodwind instruments, really brought the music together. And it’s not like the audience were passive listeners too, with everyone getting involved with the concert at one point. Each audience member was given a percussion instrument, from the bells to the kompang, and together, in spite of our differences and unfamiliarity with each other, we came together as one Singapore. 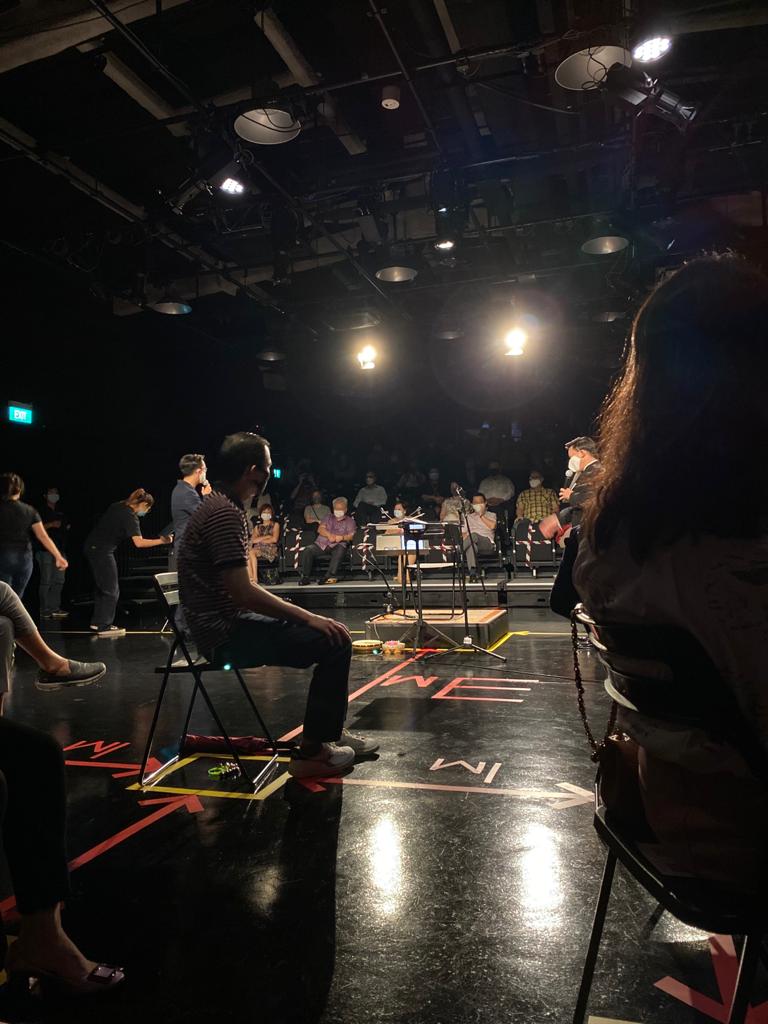 A tribute to the arts scene in Singapore and Singaporeans as a whole, Together We Stand, Live Again! has proven how the arts can be a source of hope, solidarity, and reassurance that we will weather even the toughest storms. We left the venue with a smile on our face, and more than ever, wished for the day when these venues would be filled with audience members experiencing the power of the arts once again.

Together We Stand, Live Again! played at the Stamford Arts Centre Black Box on 15th November 2020 (2pm and 5pm). For more information on their upcoming programmes, visit their website here

0 comments on “Review: Together We Stand, Live Again! by Ding Yi Music Company”