It’s hard to imagine that a Greek play from 429 BC would have any relevance in modern day Singapore, but as Nine Years Theatre has shown time and again, there is good reason why the classics are still read even today.

Directed and adapted by Cherilyn Woo (and translated to Mandarin by Huang Suhuai), Nine Years Theare (NYT) opens their 2021 season with Sophocles’ Oedipus. As one of the foremost Greek tragedies, NYT has done well to create an overwhelming sense of dread from the moment we take our seats, as Grecian pillars tower over us (as designed by Petrina Dawn Tan), while dark, atmospheric electronic music by Bani Haykal sets the tone for the rest of the show. Adrian Tan’s lighting ensures that the stage is never fully lit, with the possibility of secrets always lurking elsewhere while the characters speak. 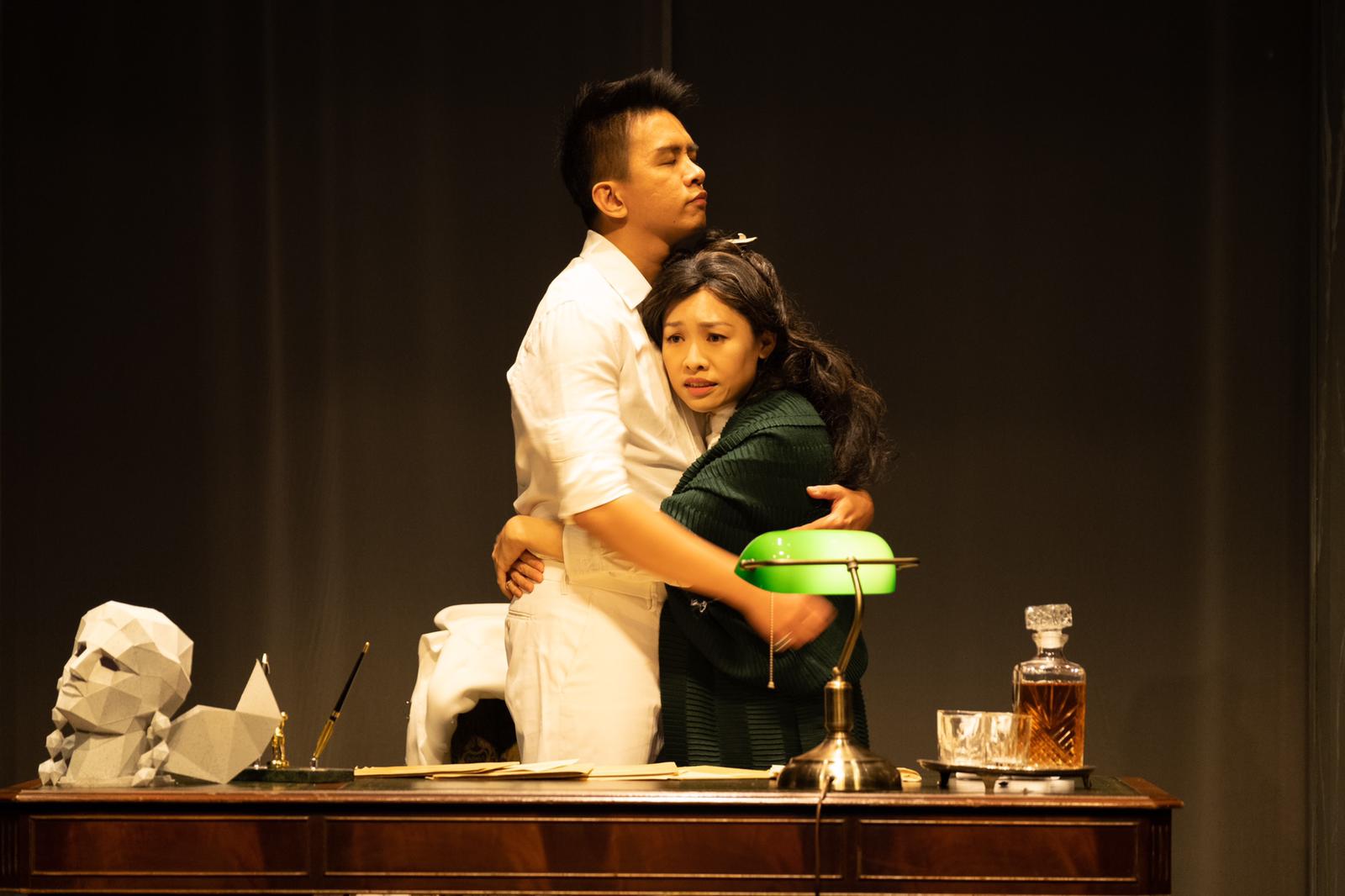 Perhaps rather appropriate for the times, the original Oedipus was set in a city ravaged by a mysterious plague claiming the lives of thousands, something this play reminds us of with a rapidly growing death toll they flash between scenes, impending doom hanging over our heads. With the citizens panicking at the increasingly dire situation, we feel a sense of urgency as President Oedipus (Hang Qian Chou) and his aides source for a solution.

Teetering on the edge of reality and the mystic, Oedipus exists in a world where the gods are believed to hold sway over mortal fates, and actual demons roam the lands, such as the sphinx Oedipus defeated years ago. There is almost a sense of magic realism then that the solution to the plague, as discovered by Oedipus’ brother-in-law Creon (Timothy Wan), is to find the murderer of the former king and bring him to justice. Following any lead he can, Oedipus summons the blind prophet Tiresias (Neo Hai Bin, firm in tone while capturing the physicality of a blind person), and in a surprisingly modern and logical explanation, uses tarot cards to unveil the truth Oedipus must himself face as he looks back at himself. 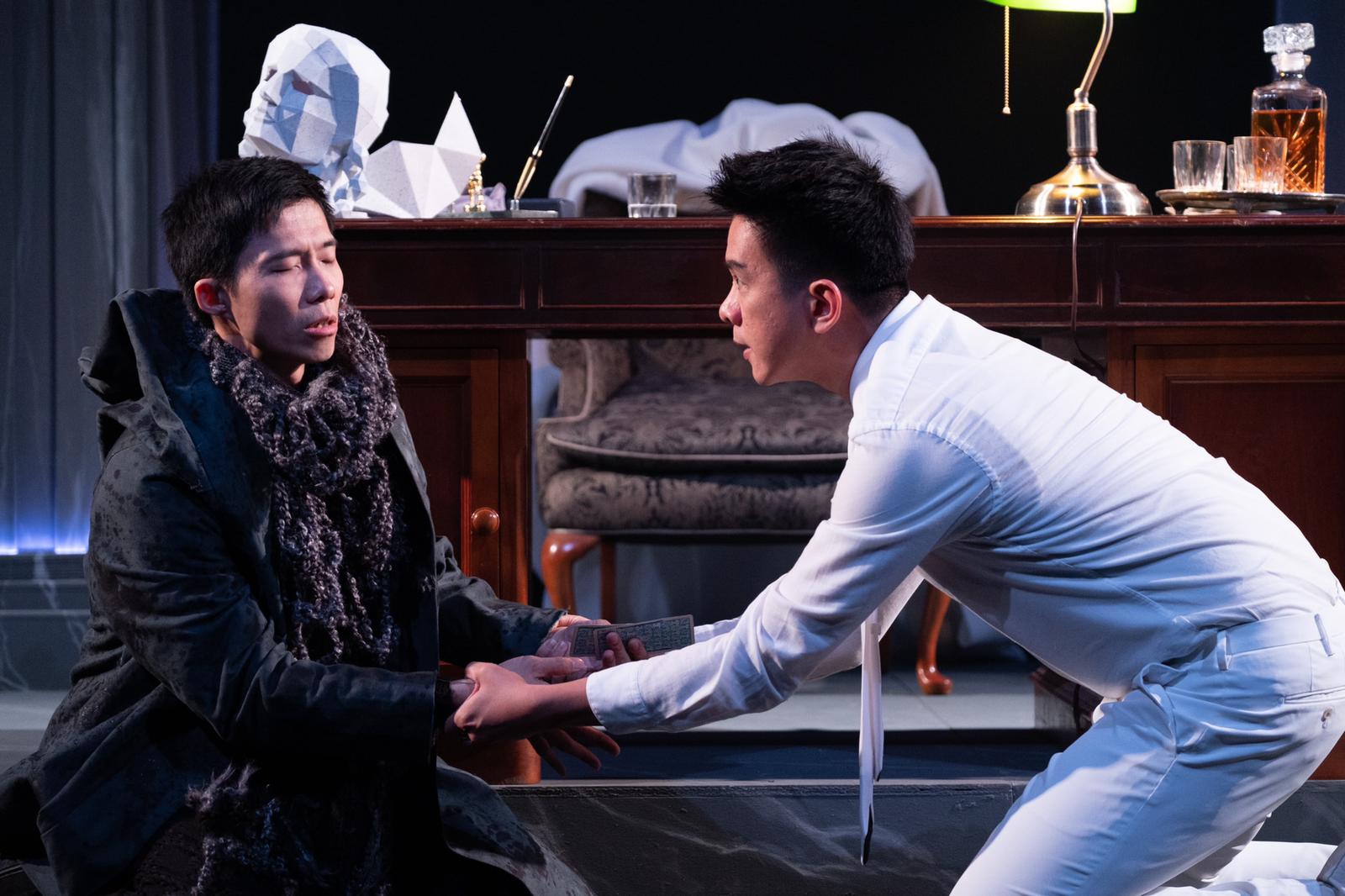 For anyone who’s familiar with Freudian psychology or heard of the ‘Oedipus Complex’, you would already know the cruel twist of fate that befalls our titular hero. Prophesied to kill his father and bed his mother, one might think that knowing this so early in the play makes it less powerful and suspenseful. But under Cherilyn’s direction, the rest of Oedipus plays out like a theatrical thriller, as we watch the president descend into madness, defending his innocence and clutching at straws or new leads to follow to throw the blame onto others. Even though we know he will not succeed, we feel for him, and want him to somehow find a way to succeed. Take for example when Oedipus accuses Creon of treason, Timothy Wan’s shifty performance allows us to suspect him of foul play, and that he still has some ulterior motive behind hiring Tiresias.

As more evidence mounts, Oedipus becomes increasingly desperate and violent, as denial becomes harder to do. Dressed in pure white, with a hooded, structured cloak (designed by Loo An Ni, whose entire costume selection feels like something out of a stylish winter collection), this image of purity and power becomes ironic the more his guilt and inability to run from his fate becomes clear. Qian Chou does well here to capture the fear in Oedipus’ voice, hiding behind a facade of shouts as he lashes out at those around him and defies the gods. In a similar vein, Mia Chee as his wife Jocasta is also eventually affected by his madness, despite maintaining a regal, royal stance and tone for most of the play, as her voice wavers once she too realises there is no escape. 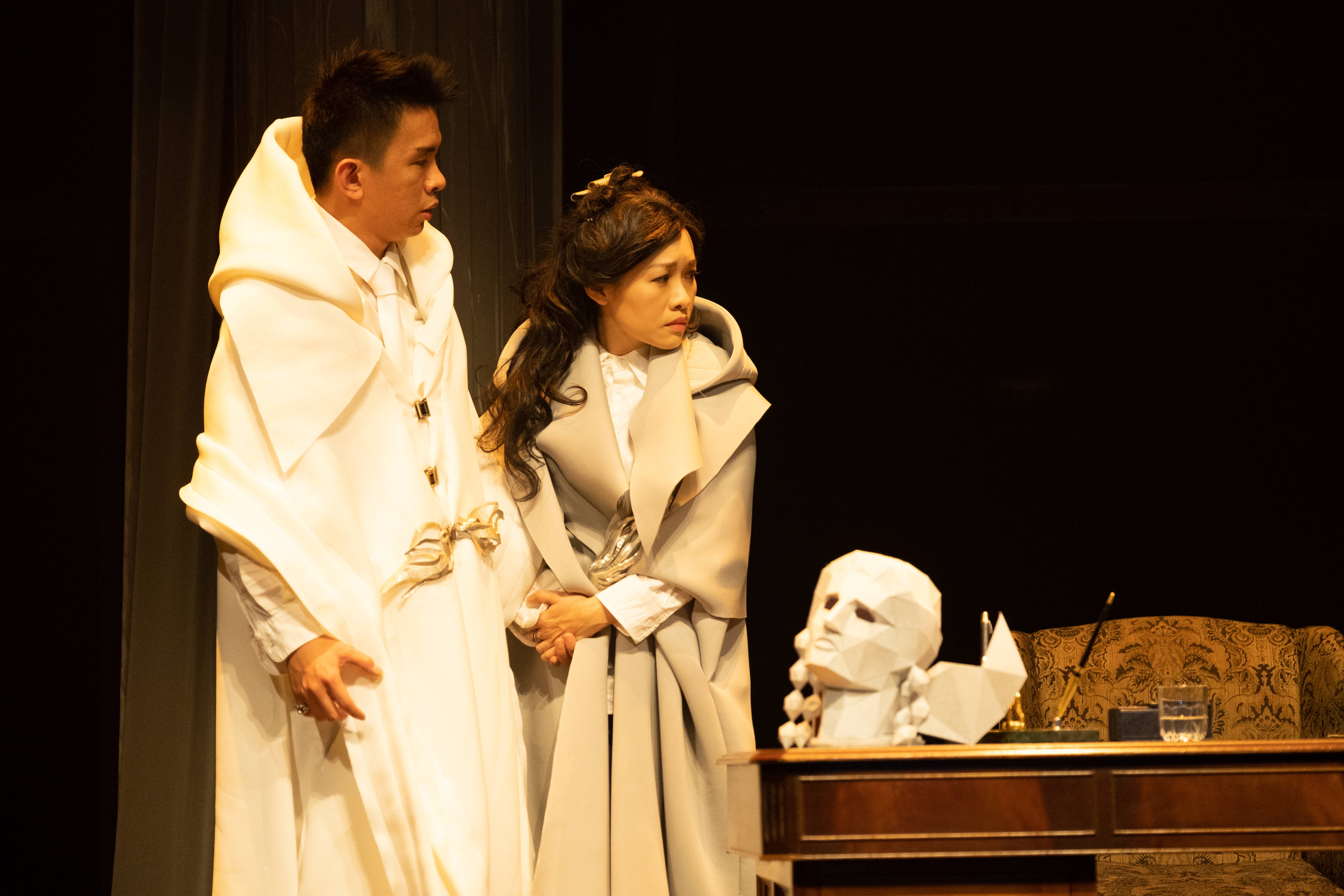 The production’s atmosphere is key to its success, with the constant sense that there is something or someone out there watching these characters, especially with a set piece of a statue literally looking down at the characters throughout the play. Similarly, as Jocasta prays to Apollo, the gods themselves seem to hear her when a Corinthian secretary (Timothy Wan, whose voice makes him sound believably beyond his years) seems to creep up on her, and we get the impression that the news he is about to deliver will be the final nail in the coffin for Oedipus.

With the Corinthian secretary revealing all, Oedipus is finally forced to accept the truth as a series of inevitable reveals leads to the dramatic climax, as he corroborates all the evidence against his final witness’ testimony (Hai Bin, pathetic and fearful in his physicality as an old shepherd). The truth hurts, and to present this, Cherilyn choreographs a stylised show of agony as we watch Oedipus’ family come apart, all the elements coming together to break him, and allow us to feel his physical and mental pain as he inflict brutal wounds upon himself. 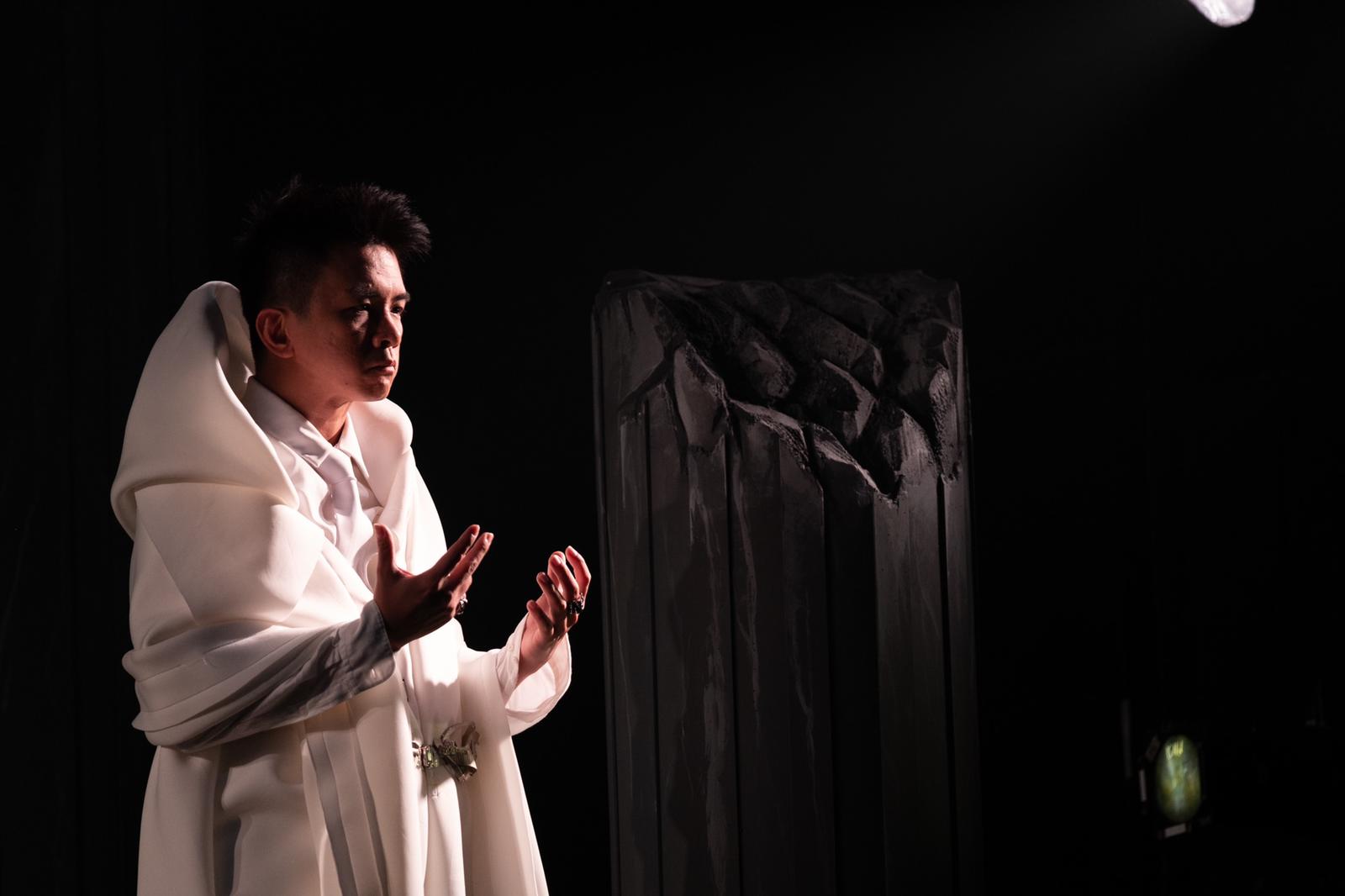 Yet as violent as that scene is, even if the cards fate has dealt him are undeniably cruel, we sense relief emanating from him as Creon takes over the presidency, and Oedipus finally accepts his punishment. At our matinee show, Oedipus’ exile and exit from the theatre sees him stepping into the outside world while blinding sunlight streams in, almost as if to signify that it is only when one dares open one’s eyes to the harsh realities about one’s self, that one can begin to make amends, and let the truth set you free.

As a modern adaptation of a classic Greek tragedy, director Cherilyn has done remarkably well to bring out the play’s message and cathartic effect, and showing strong understanding, maturity and vision. Oedipus is ultimately a chilling look at a man hanging by a thread to a facade he’s built up his whole life, and a reminder to the audience that the truth will always catch up to you.