This weekend, local theatre company Drama Box will make history as the first arts group outside of Rotterdam to host part of the International Community Arts Festival (ICAF)‘s Mini-ICAF. Focusing on community arts and community-based arts work, this year’s edition takes place across both Rotterdam and Singapore via livestream and Zoom, through in-depth conversations, dance and film workshops, and even a community arts performance fully created on Zoom.

Prior to this festival, we spoke to Drama Box Co-Artistic Director Koh Hui Ling and found out more about how Drama Box has been working with the ICAF over the years, and what a milestone it is to do this. Particularly as this comes right after Hui Ling has formally assumed her role, this marks the first big programme as Co-Artistic Director.

“We joke about how so many of our current staff have been working at Drama Box for so long, and it’s honestly a very calming situation to have the same group of colleagues around, and for everyone to be familiar with each other’s work and style, it allows us to explore different options and possibilities,” comments Hui Ling. “And we do see everyone as capable in their own right, so we never to hover over them to monitor their work, and really give them a lot of independence. I’d say it’s very flat in terms of hierarchy, and how we like to involve even our resident artists Xuemei and Yikai to join in for ‘high level meetings’ like major grant submissions.”

“We’ve had great synergy, and a good working relationship, and a mutual respect and appreciation for each other’s views.”

As for her position as Co-Artistic Director, Hui Ling explains how it really is more of a title change than actual change in responsibility. “I’ve been working with Heng Leun for more than 16 years now, and even before I joined the company, I was following him around as an assistant for his workshops on applied theatre and drama,” says Hui Ling. “We’ve had great synergy, and a good working relationship, and a mutual respect and appreciation for each other’s views.”

“We’ve been going through some restructuring since 2019, and the main aim was to readjust the work and our process, and needing an executive director to come in with a strategic eye and lend administrative support to our artistic work,” she adds, regarding . “When Kevin came onboard, he really took the time to understand the company, and together, we’ve planned what Drama Box can do in future, especially with how we aren’t just ‘producing theatre’, but also considering our process and the social commentary forming the backbone of what we do. So after taking the time off not to produce any new work in 2020 and have a bit of introspection, we now have programmes planned up to the next 5 years. There’ll be some big changes and small changes, but we’re really all just pushing ourselves further each time, grow new networks, and work on all the potential and possibilities we have.”

“While we are taking precautions, we’re still optimistic that our new programmes will work, whether they’re online or have live elements (all within safety measures of course).

“Living under pandemic conditions as a major grant holder, we had to negotiate with NAC about our output, and change the way we worked. We even had a COVID committee which monitored updates in rules and regulations, and how that would end up affecting our work!” adds Hui Ling. “While we are taking precautions, we’re still optimistic that our new programmes will work, whether they’re online or have live elements (all within safety measures of course). And of course we’re trying new things too, like with Heng Leun’s new multi-disciplinary project Butterfly, about mental health issues, where we’re exploring outdoor spaces as an option, and involve audiences somehow. After all, it’s been said that it might take 7 years for the entire world to be vaccinated, so in the meantime, we need to adapt and work with these new limits, morphing and changing our projects accordingly.”

Going back to the philosophy behind Drama Box itself, Hui Ling emphasises the company’s focus on Theatre of the Oppressed and forum theatre, making them the perfect candidates to host the Mini-ICAF hub here in Asia. “We tend to look a lot at minority communities and voices, where theatre becomes a powerful, privileged space where we can allow these conversations to happen and be heard,” says Hui Ling.

“The first year we went, there were so many icons and figures of community theatre, like Peter Schumann of Bread and Puppet Theatre, and we ended up building up this strong network of friends over there.”

“I first heard of ICAF when I was studying, and I wanted to attend because it was one of the few community arts festivals out there, and also, the chance to meet artistic director Eugene Van Erven, whose books I had read,” Hui Ling says. “The first year we went, there were so many icons and figures of community theatre, like Peter Schumann of Bread and Puppet Theatre, and we ended up building up this strong network of friends over there. We ended up connecting with Eugene via Dr Edmund Chow from Lasalle, and in 2014, he ended up writing to us, and telling us it was his dream to expand ICAF to other parts of the world, and how to include more of an Asian presence, to show the different practices within the region.”

“Eventually, in 2016 when we did IgnorLAND of its Loss in the GoLi at Dakota Crescent, Eugene flew over to see the kind of work we did, and he really enjoyed the experience. Following that, we brought the whole company over to Rotterdam in 2017, and it acted as a mini-study trip for us as we explored how the world created different community art projects, before we were asked to be panellists for the 2020 edition,” Hui Ling continues.

“We got around to talking about the potential for satellite ICAF hubs in other parts of the world, and since ICAF is a triennial event, these hubs can keep the momentum going and showcase different artists-in-residence or programmes, before coming together for the main event. It’s all about multiplication, and being able to spread this idea of community theatre to even villages to make them practitioners, and gain traction and numbers to produce social movements. And so ICAF eventually got the funding to do a Mini-ICAF, got back to us, and with how it’s gone virtual, there’s no need to travel, and even with the pandemic, we can continue this conversation, continue to teach each other, and do cultural exchange.”

“For me, while the Mini-ICAF is new and we have no idea how it’ll carry on from here, I’m just very excited by the possibilities it presents, as we get to gather, especially with Southeast Asian practitioners,” Hui Ling says. “We do have things like SIFA which make us an arts hub, or even Arts In Your Neighbourhood to try to engage the community, but I do feel that our practice focuses on working with specific interest groups, and looking to find a targeted group of people to work alongside us.”

“I do believe that such a practice opens up a totally different point of view, and we need to learn more about the importance of facilitating.”

“Hopefully, that more experienced practitioners eventually try engaging in this way, honing the skill required to do it, and develop the practice further. Even when we did Both Sides Now for instance, our Front-of-House had to learn a whole new skillset when it comes to facilitating conversation with members of the public, and how to handle when they tell us personal things, since the overarching topic is about death and what comes after.”

“I do believe that such a practice opens up a totally different point of view, and we need to learn more about the importance of facilitating. Take for example how the Singapore Drama Educators Association (SDEA) do a lot of training and application of that, and how when I was in SDEA, we always dwelled on how to gather practitioners from the region, and being able to help them apply such practices for those from less privileged backgrounds than Singapore, and how to adapt it to each different community,” Hui Ling adds.

“When we were talking to people from Thailand and Cambodia, where they were dealing with literal life and death issues, I wondered to myself whether our own work was unimportant or frivolous by comparison, and really looked at how an urban city faces such completely different challenges from a less urbanised place. I want to showcase the diversity the practice can be applied to, and Eugene shares that thought, to see the cultural boundaries that shape each artist’s work, and to help others understand the sociopolitical and cultural contexts, and how complex our backgrounds are that result in such different work.”

Local company 3pumpkins will be involved in the Mini-ICAF

“I remember how when social media first appeared, I was having a conversation with Heng Leun about how this was a perfect opportunity to explore the possibility of using it as free space to talk, which then required people to learn how to talk,” says Hui Ling. “Critical discourse is a key aspect of the work we do, and perhaps why we’re all so drawn to Theatre of the Oppressed. We want to create this safe space where people are comfortable enough to share and talk, and think and rethink about the nature of theatre itself. Drama Box seeks to find the middle ground between being popular and accessible, while also finding the ability to bring out the seriousness of our topics.”

“We imagined that Drama Box would one day be able to provide a space where such critical discourse can happen, and to help move us outside of our arts scene echo chamber, and have conversations and exchanges with people even outside of the scene.”

“We’re still exploring the possibility of forum theatre, what participatory theatre means, and still experimenting with form and execution. We’re thinking of this thing called The Exchange, which stems from how Heng Leun and Xuemei and I remember about spaces, like just out The Substation, where people could hang out and share ideas and somehow have projects blossoming from that,” Hui Ling muses. “And we imagined that Drama Box would one day be able to provide a space where such critical discourse can happen, and to help move us outside of our arts scene echo chamber, and have conversations and exchanges with people even outside of the scene. It’s still in the works of course, but we’re taking a leaf from Heng Leun’s stint as Art NMP, where he demonstrated how to use an artistic approach to comment on non-artistic things, like policies, and find new ways of facilitating those conversations.” 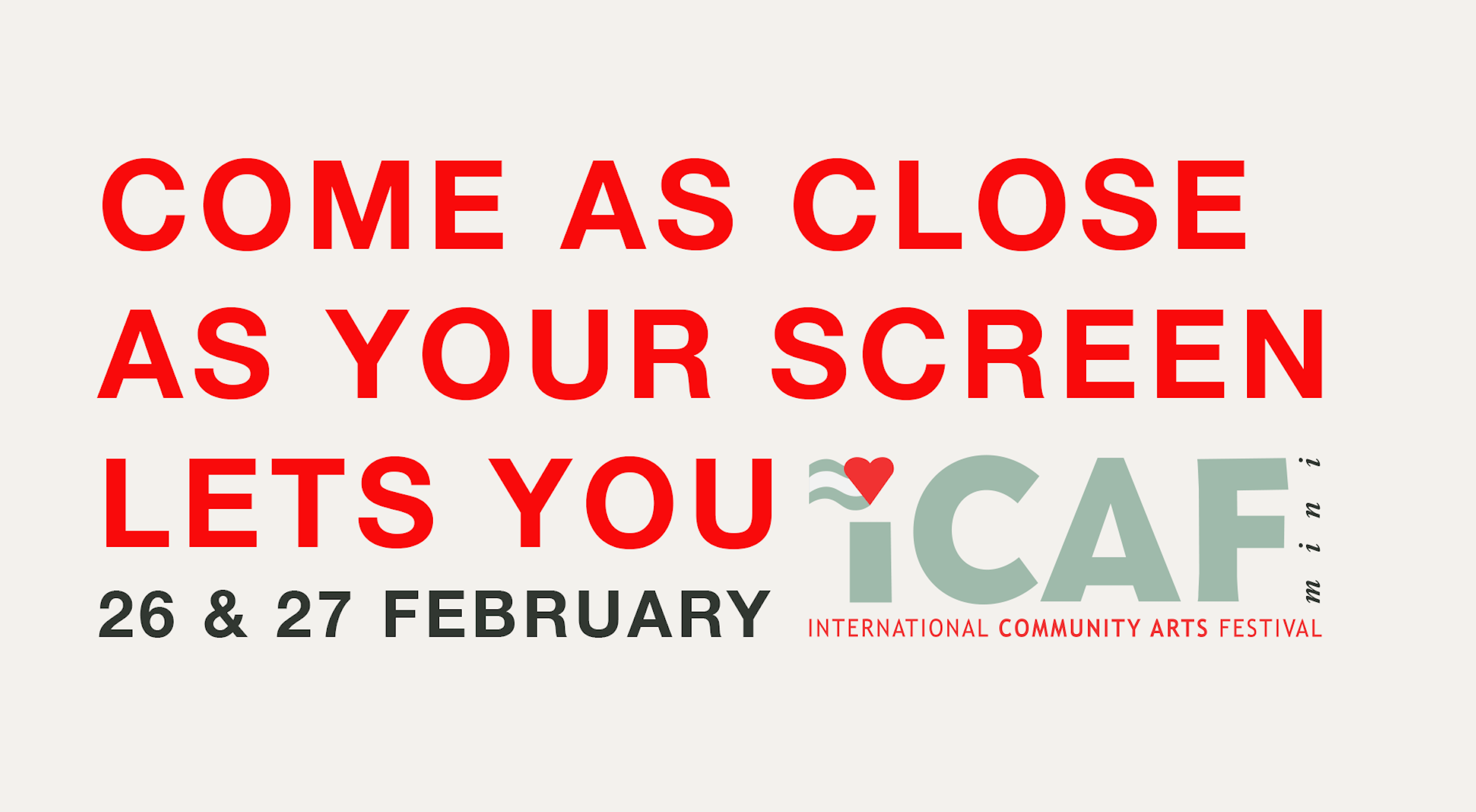 “Ultimately for us, it’s never just a case of putting on a show, but also making sure it is a practice of change through the critical discourse and meaningful conversations generated,” Hui Ling concludes. “While yes, we see a lot of online vitriol where people have no accountability for what they put up, I do have a lot of hope in the youth of today. I think they see the mess, and they don’t want to be a part of the mess. That’s exciting, to look forward to this new generation of young people who want to make a change, and hopefully, we see that extend to society as a whole.”

The International Community Arts Festival (ICAF) takes place on 26th and 27th February 2021 online. All programmes at Mini-ICAF are free of charge, and for more information, visit their website here

0 comments on “The Banter: Koh Hui Ling shares more about the Mini-ICAF and Drama Box”