Ambitious project takes a leaf from the past and spotlights newer actors.

In the making since 2018, The Singapore Trilogy marks one of The Second Breakfast Company’s (2BCo) most ambitious projects. Combining Robert Yeo’s plays Are You There, Singapore? (1974), One Year Back Home (1980) and Changi (1997) into a single 2.5 hour epic, the play traces the lives of two siblings and a close friend, as they return to Singapore from their studies in London, participating in politics while dealing with their personal entanglements. 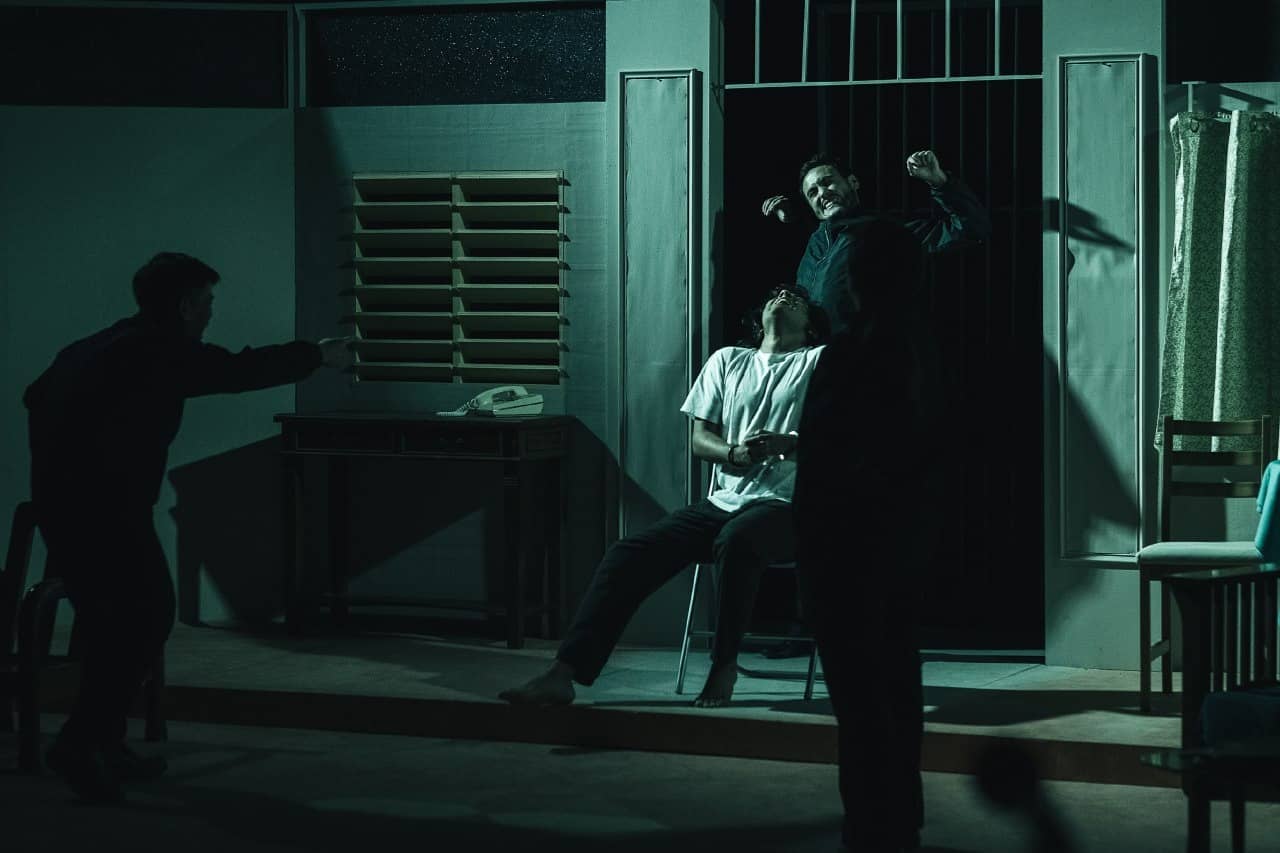 Taking place during the 60s and 70s, the scene is set with snippets of news and music from the era, one that was not only defined by big hair and disco, but also the rise of Singapore as an independent state. The play’s political slant is apparent from the start, as we watch a worried mother (Aiswarya Nair) wondering about the whereabouts of her son. That son happens to be Reginald Fernandez (Shrey Bhargava), who’s being tortured in detention, a chilling echo of some of the more morally questionable actions from Singapore’s internal security division (ISD).

While The Singapore Trilogy is primarily about politics and nationhood, the heart of the play lies in the changing friendship between Fernandez and his best friends, siblings Chye (Caisdhe Ng) and Hua (Ong Yi Xuan). Flashing back to the time they were in London together, we watch as they discuss the political situation in Singapore, with its one party state and how it would progress, and we wonder how this close relationship, will be tested in the years to come. 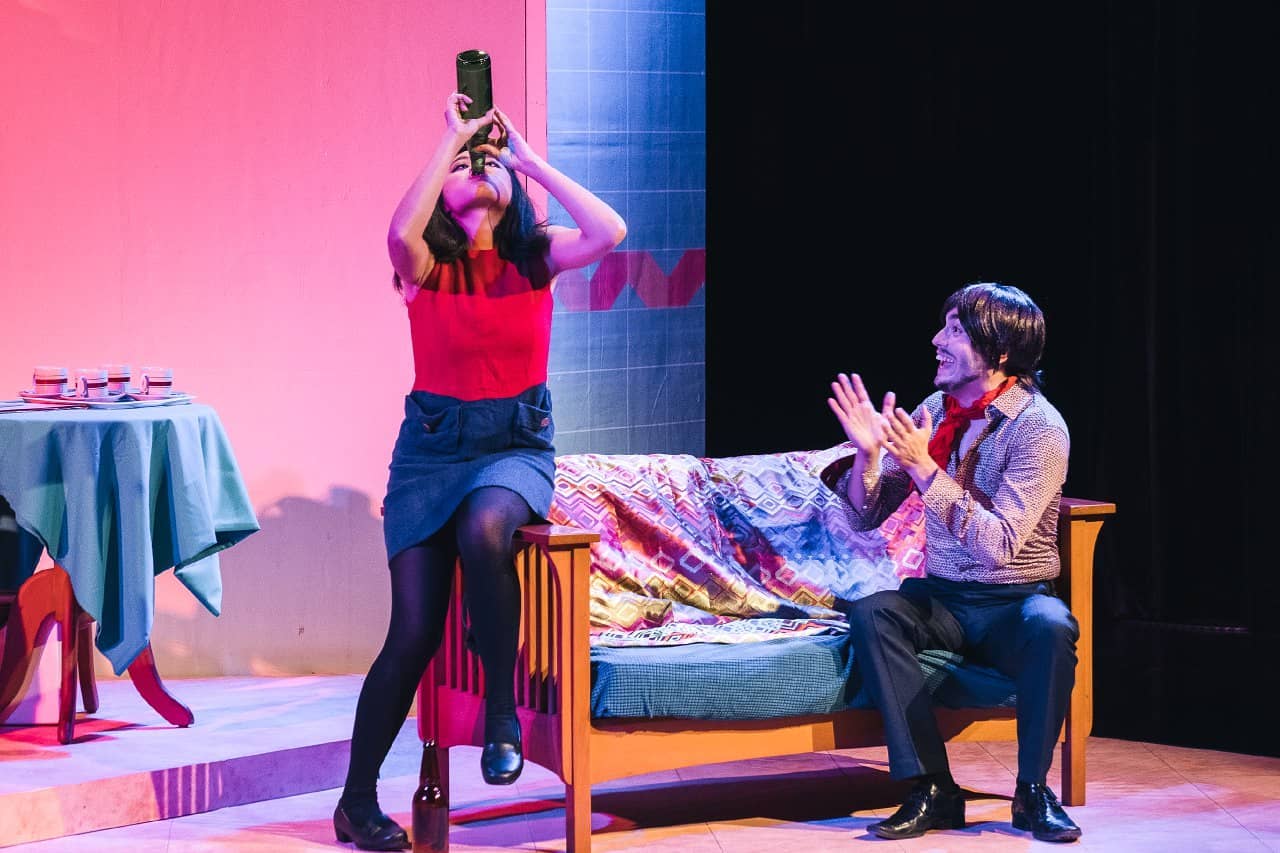 Moving to the 70s, complete with disco-era clothing and lights (costume designers Denise Dolendo keeps us invested in the illusion with her wardrobe choices), The Singapore Trilogy begins to delve into the chain of events that lead to their futures. The stage is set for an intense rivalry as Fernandez and Chye have now joined opposing political parties, while Hua has gotten pregnant thanks to a charming Italian suitor (Yuri D Hoffman), and must decide whether to keep the child. The tensions are high and primed for drama. 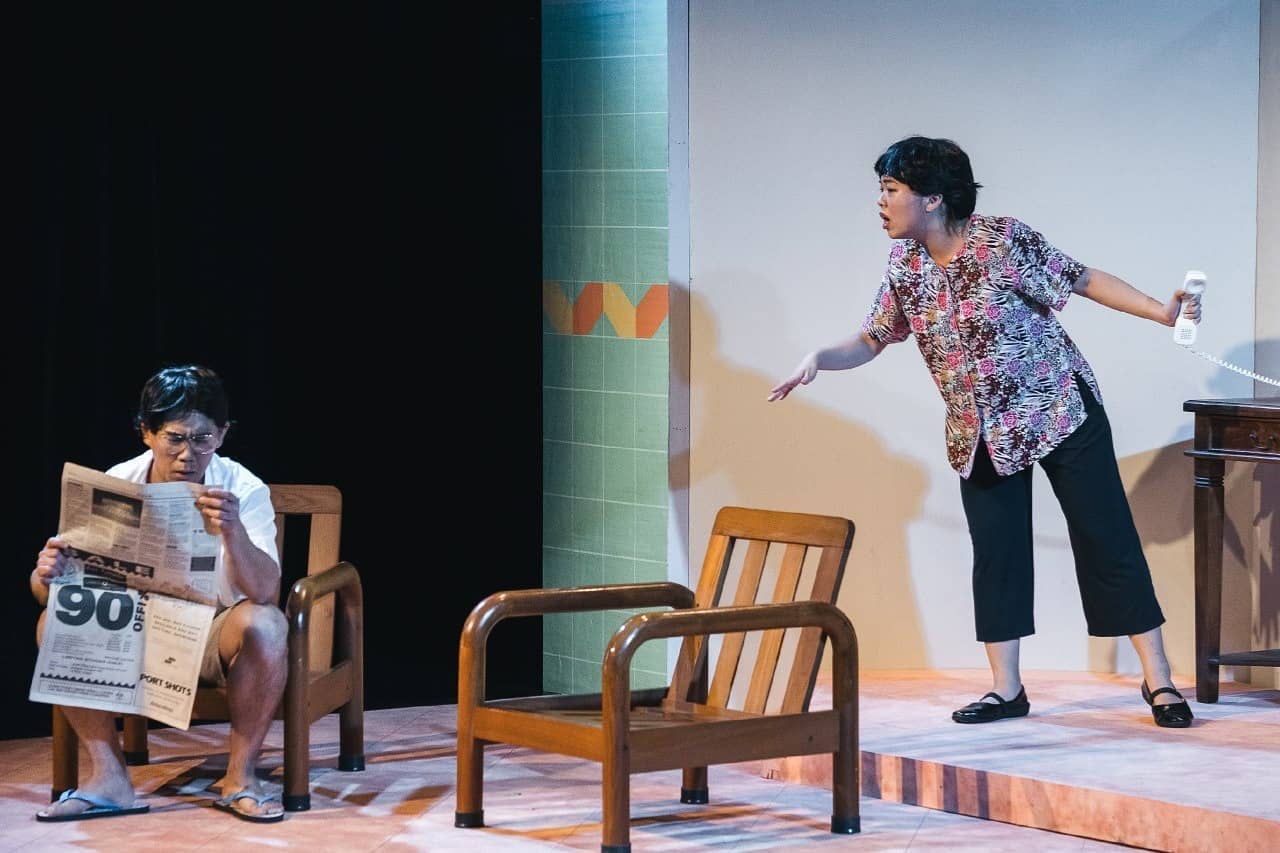 Despite these tensions, there are occasional moments of levity, especially with Chye and Hua’s parents (Lim Shien Hian and Aricia Ng), cheeky yet worried about their children so far away in a foreign country. At times, they offer comic relief with their contrasting personalities – the father is far more lax, while the mother is a ‘kanchiong spider’, constantly busying herself with her friends on the phone. 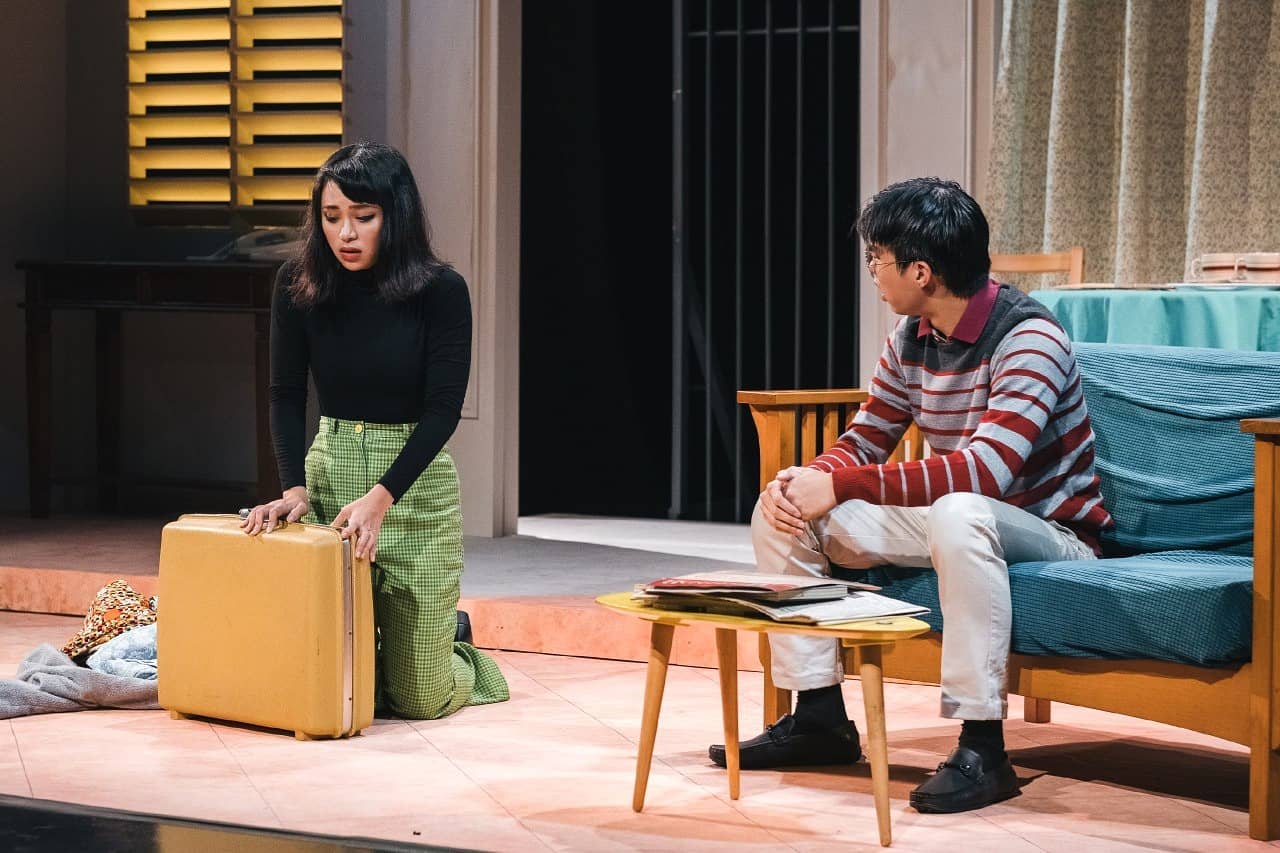 But of course, our main focus remains the friendship between our three protagonists, as Chye and Fernandez prepare to go head to head in the by-elections. The chemistry between Shrey and Casidhe, as friends and political rivals, is particularly exciting to watch. Both of their characters stand in such strong contrast; Chye is in a do or die position, where he must win at all costs, while Fernandez is more lax; his campaign photo resembles a mugshot, something he laughs off. Fernandez also makes it clear he doesn’t stand in opposition to all the PAP’s ideals, but simply wants to hold the middle ground, where the only way out is to stand against. It is these tensions that keep us fixated on their relationship at the heart of the play, and create the possibility of an explosive argument at any point. 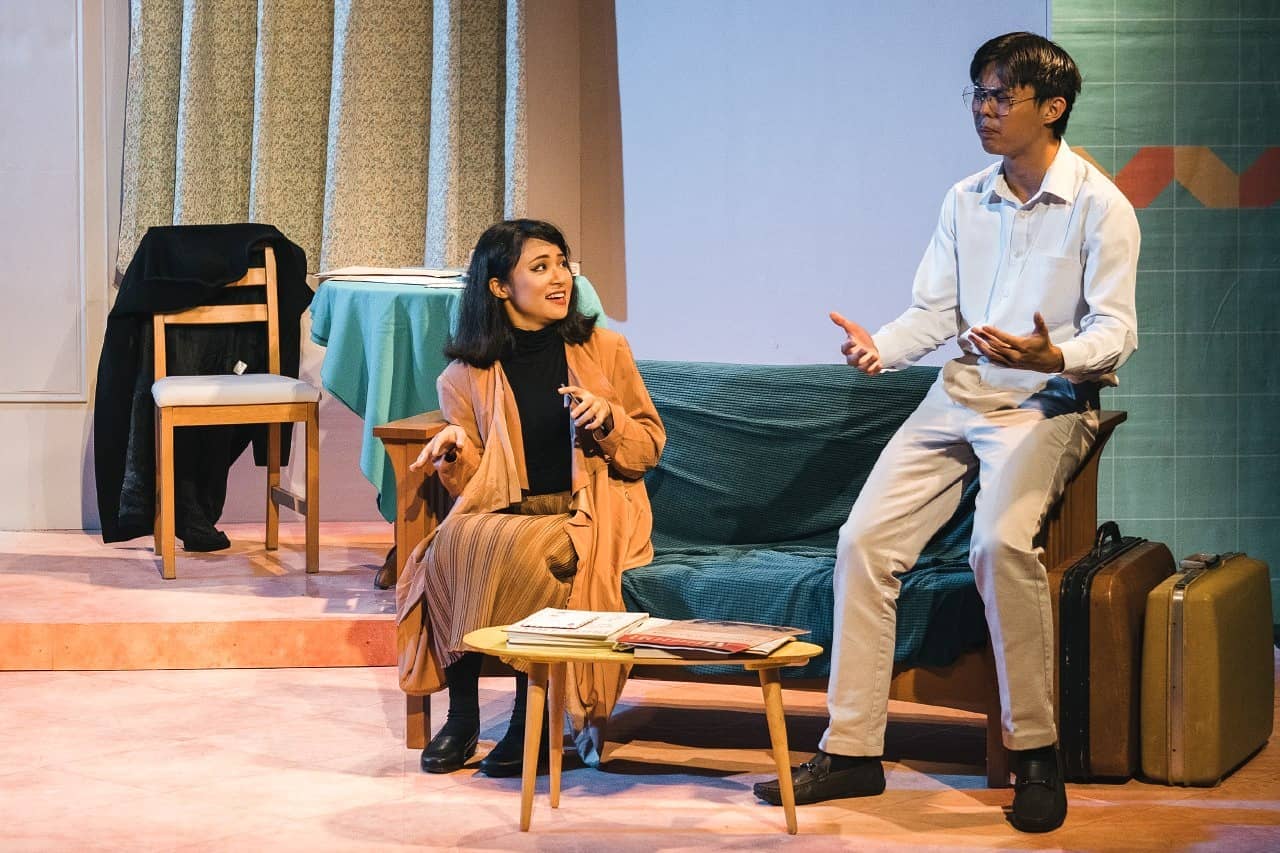 The first of many fights between them arises when the stock market crashes, and we watch as the two rivals break into an argument. Here, Casidhe does especially well to showcase his character’s drive to win, using eloquence and wit to get his way, revealing a smug smirk once his victory is assured. As the two continue to prepare for the elections, we watch Hua torn between her brother and friend, wanting to support them both, yet still steadfast and level-headed in her conversations with them. 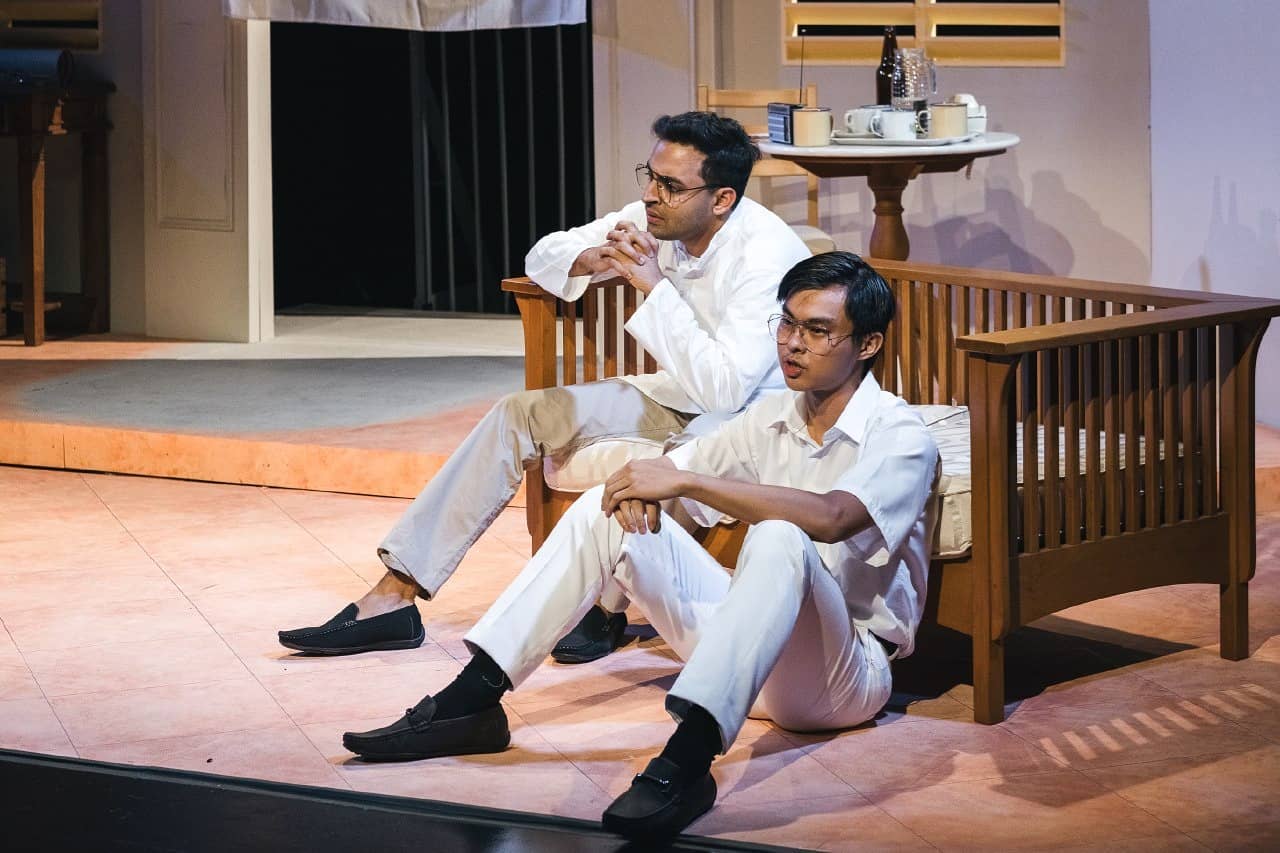 While we are familiar with the inevitable outcome, our heart still breaks for Fernandez’s loss. At a television conference, he appears completely beaten down, and we realise how much the odds were stacked against him to begin with, the opposition having never been given a fair chance at winning.

Back in prison, Chye, now working for the ISD, attempts to negotiate with Fernandez, tempting him with a television confession to be let out of detention early. Fernandez however, is clearly struggling to say yes, and watching Shrey, his eyes red with tears, we see how overwhelmed he is by this act of betrayal from his former best friend. Chye pulls his last trick – leveraging on Fernandez’s close relationship with Lisa (Hua’s daughter), and convinces him at last, emerging victorious once again. 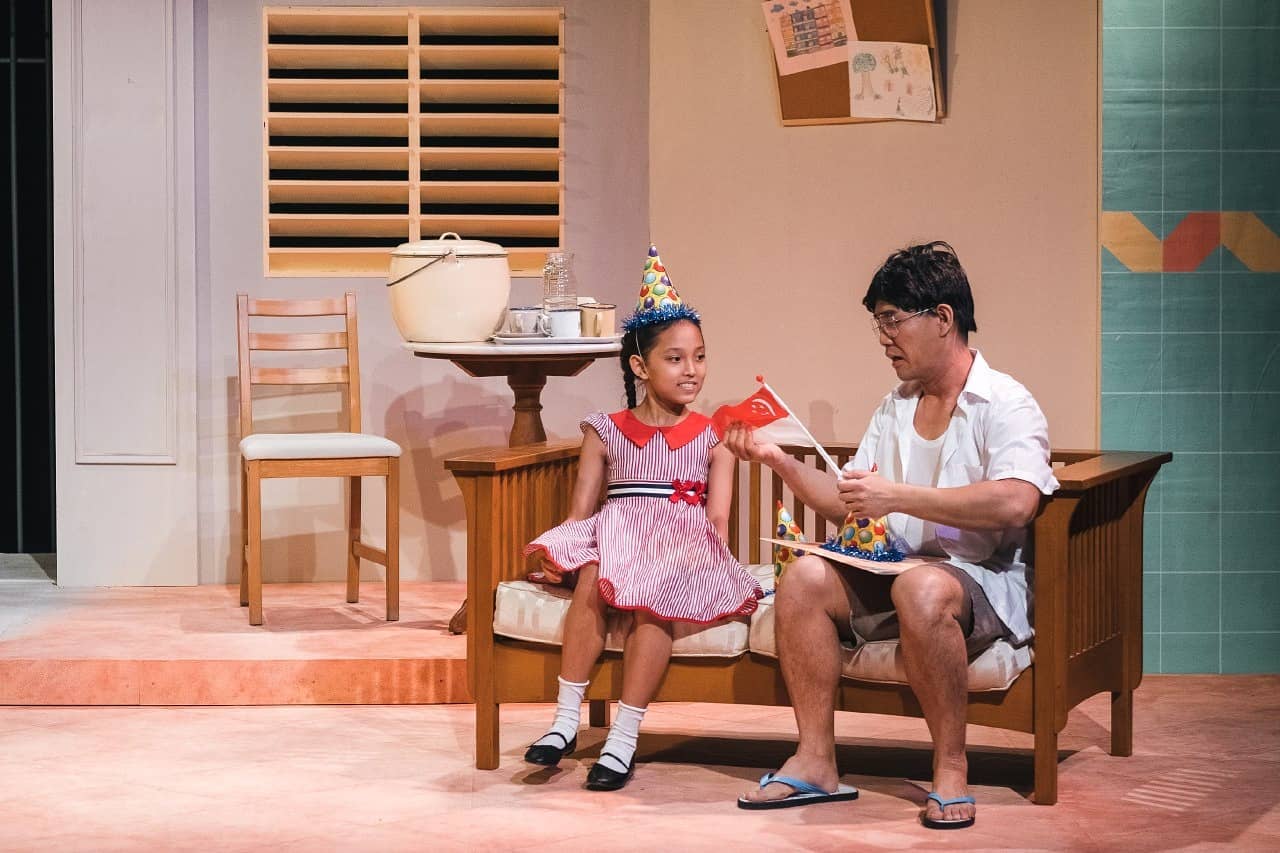 In the play’s denouement, a few years later, Lisa is celebrating her birthday (National Day). She asks the adults about what the stars on the flag stand for, and no one can answer her, showcasing how there are times we forget to uphold these ideals and promises we make in our pledge every day. For the long-suffering Fernandez, things are only getting worse, as Hua makes a call to inform him his father has passed. 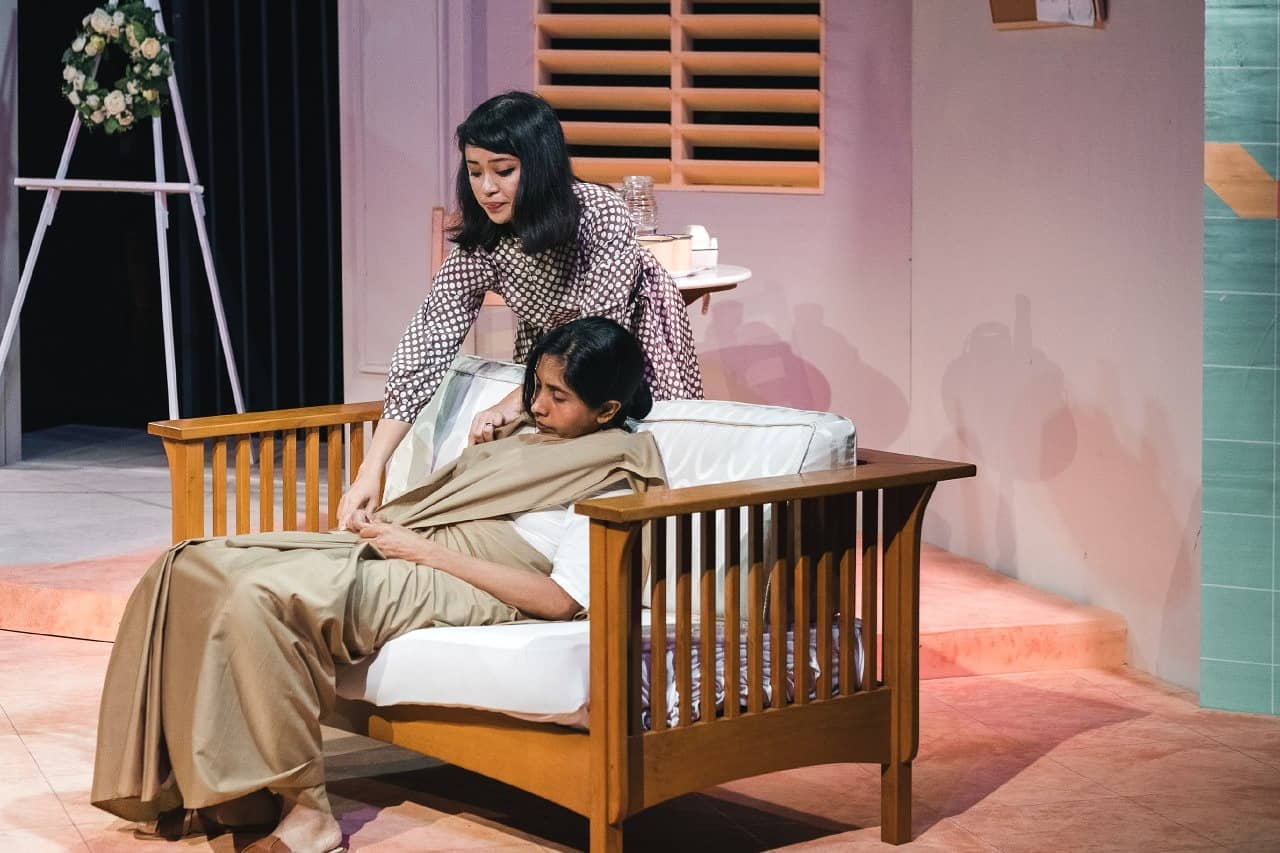 The funeral is a sobering one, with how much light it sheds on the differences between Chye and Hua, and Fernandez. The siblings hail from a more privileged family, while Fernandez’s has always struggled, indirectly leading to him wanting to help others through politics. He delivers a speech, and we feel for him, and sense his fire and passion through Shrey. Walking with a limp after the years in detention, we wonder what else is left for him, as we watch him, Hua and Lisa hang the national flag on the front door, holding hands and contemplating its significance, or lack thereof. 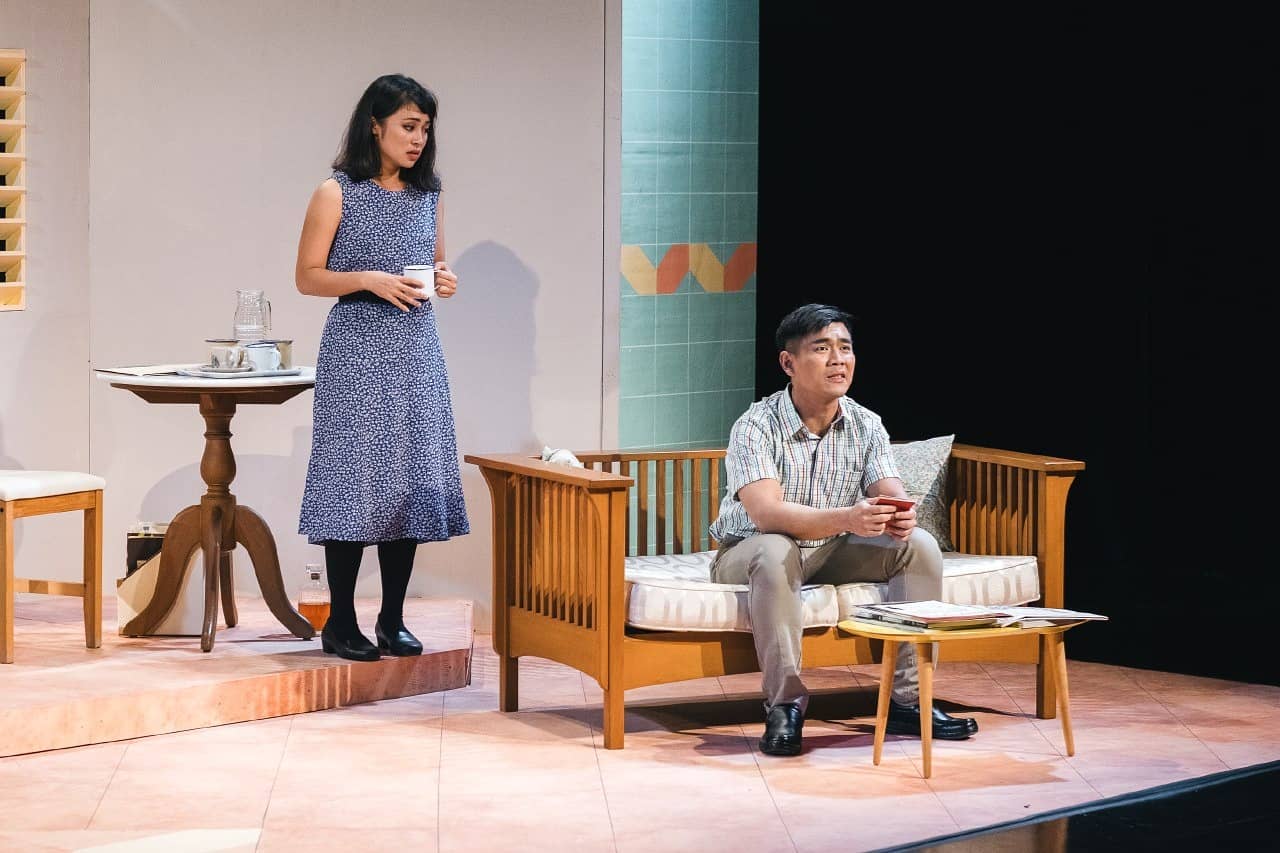 2BCo has always been a champion of new artists to the scene, and this play is no different, spotlighting Shrey, Casidhe and Yixuan’s talents in their leading roles, and a chance to showcase the other cast members onstage as well. However, the fact that each minor character gets so little stage time often serves as distraction from the core of the play – the ever-changing relationship between Fernandez and Chye. This play was a challenge for the company, combining three dated texts into the runtime of single play, which then saw difficulty in maintaining its cohesiveness and pacing, often with too many events that drag out the runtime and prevent it from being as tightly directed as it could have been. Still, in spite of these issues, there remain little echoes and moments littered throughout The Singapore Trilogy that strike close to home, touching on familiar issues of politics, nationhood, and above all, friendship. 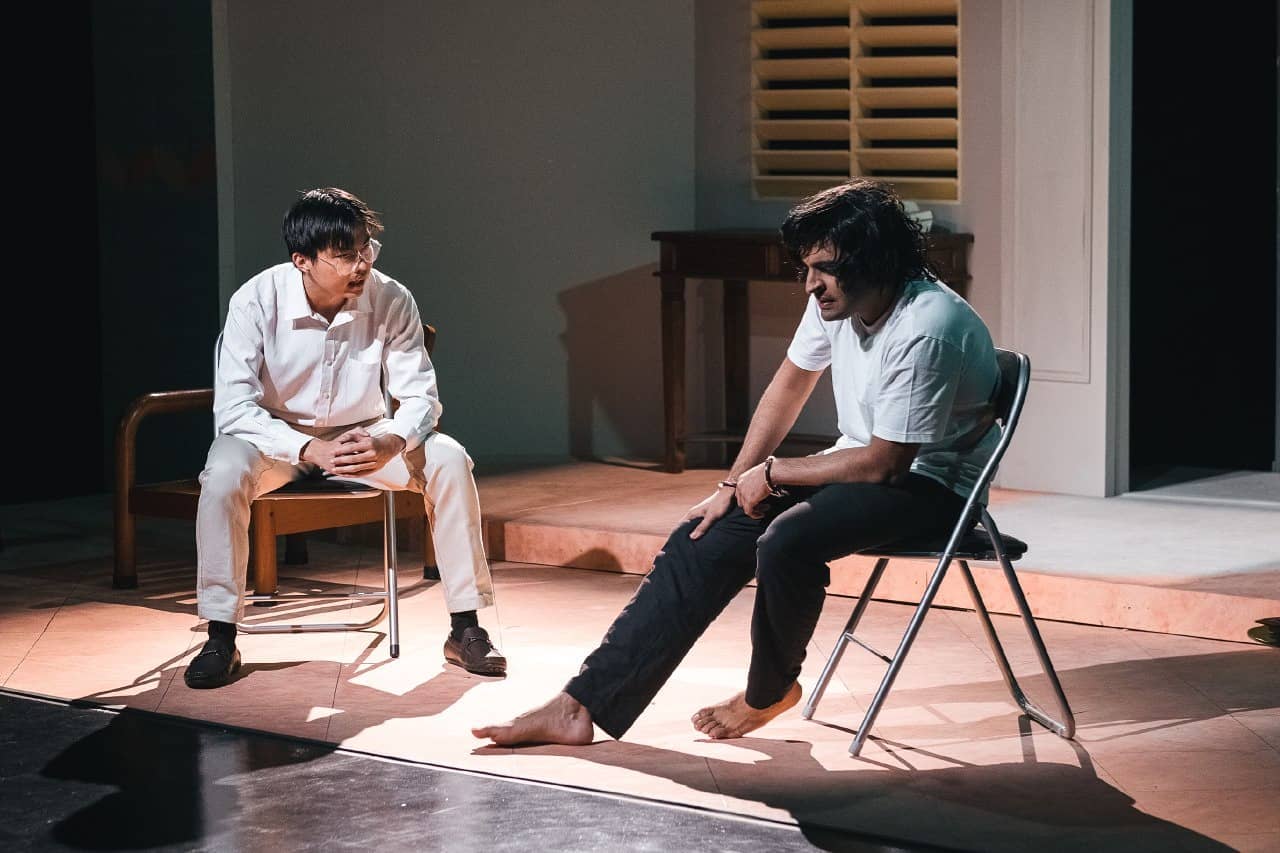 It is the actors’ chemistry that makes the final nail in the coffin so hard to watch, as Chye make a final attempt to convince Fernandez to switch sides. Lording over him with the power he wields, the friendship that has weathered the years seems at an end, as Chye hands Fernandez a beer and offers a handshake. We think about the troubles faced by Fernandez and his life whittled down to nothing thanks to the ruling party. Are these the foundations we want to build our nation on, as we say our pledge each morning facing the flag? We’re left only to wonder this as we end with a blackout, the question left unanswered and hanging in the darkness.

The Singapore Trilogy plays from 11th to 21st March 2021 at the Stamford Arts Centre Black Box. Tickets available from Eventbrite Digital streaming details to be confirmed.

3 comments on “★★★☆☆ Review: The Singapore Trilogy by The Second Breakfast Company”