The stories and lived experiences of minorities take centrestage in week 2 of The Substation’s SeptFest.

For the second week of The Substation’s SeptFest, we watched two works centred on minorities, in terms of both race, and unique life experiences. Both pieces this week had strong messages about what they wanted to say about their identity, fiercely unique in their personal voice, and speaking loud and clear for all to hear. 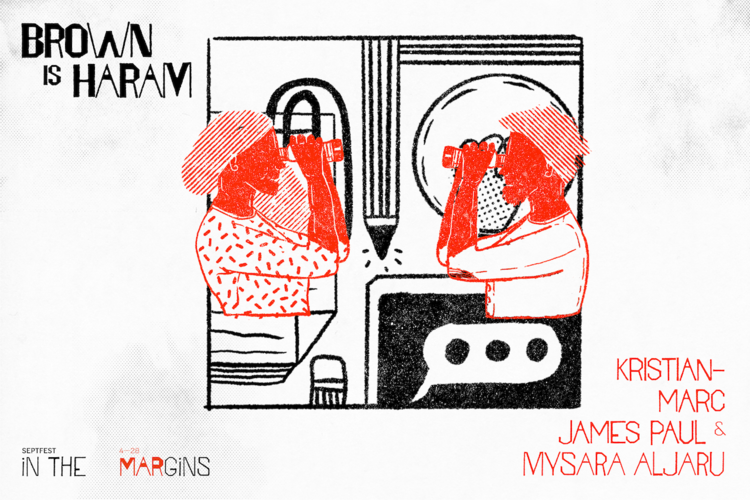 We opened the evening with Kristian-Marc James Paul and Mysara Aljaru’s Brown Is Haram. Split across 4 ‘chapters’, the performance-lecture explores Brown narratives in Singapore, with a focus on social mobility and masculinity. The set is simple, comprising only a screen, a table full of books, and two chairs, where Kristian and Mysara sit across from each other. 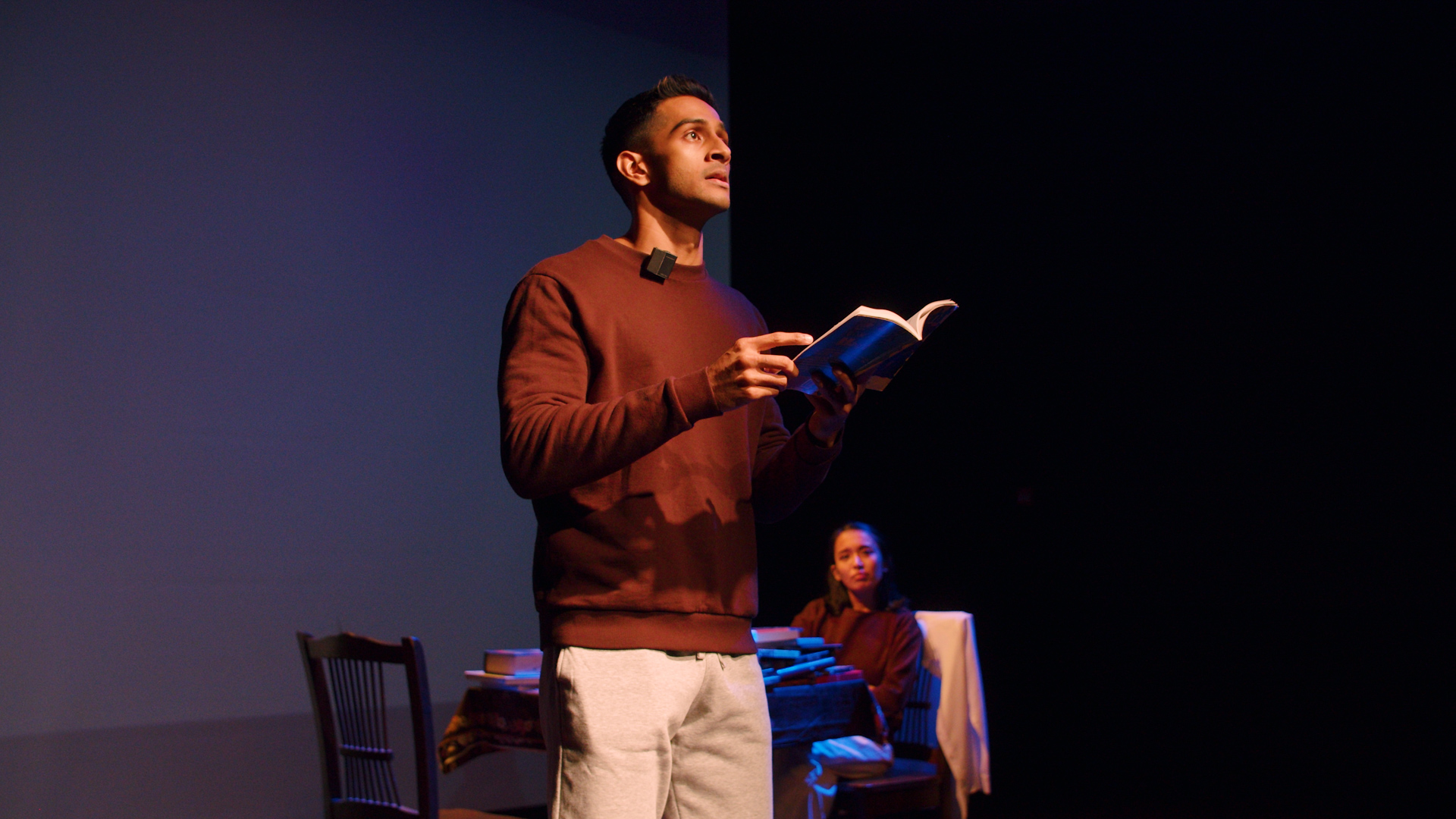 Speaking candidly about the brown lived experience in Singapore, the performance opens with a conversation about colour, pondering over the definition of brown. Coming from a place of authenticity, the storytelling in Brown is Haram is powerful, rich with descriptors that allow us to feel and sense their emotions onstage. 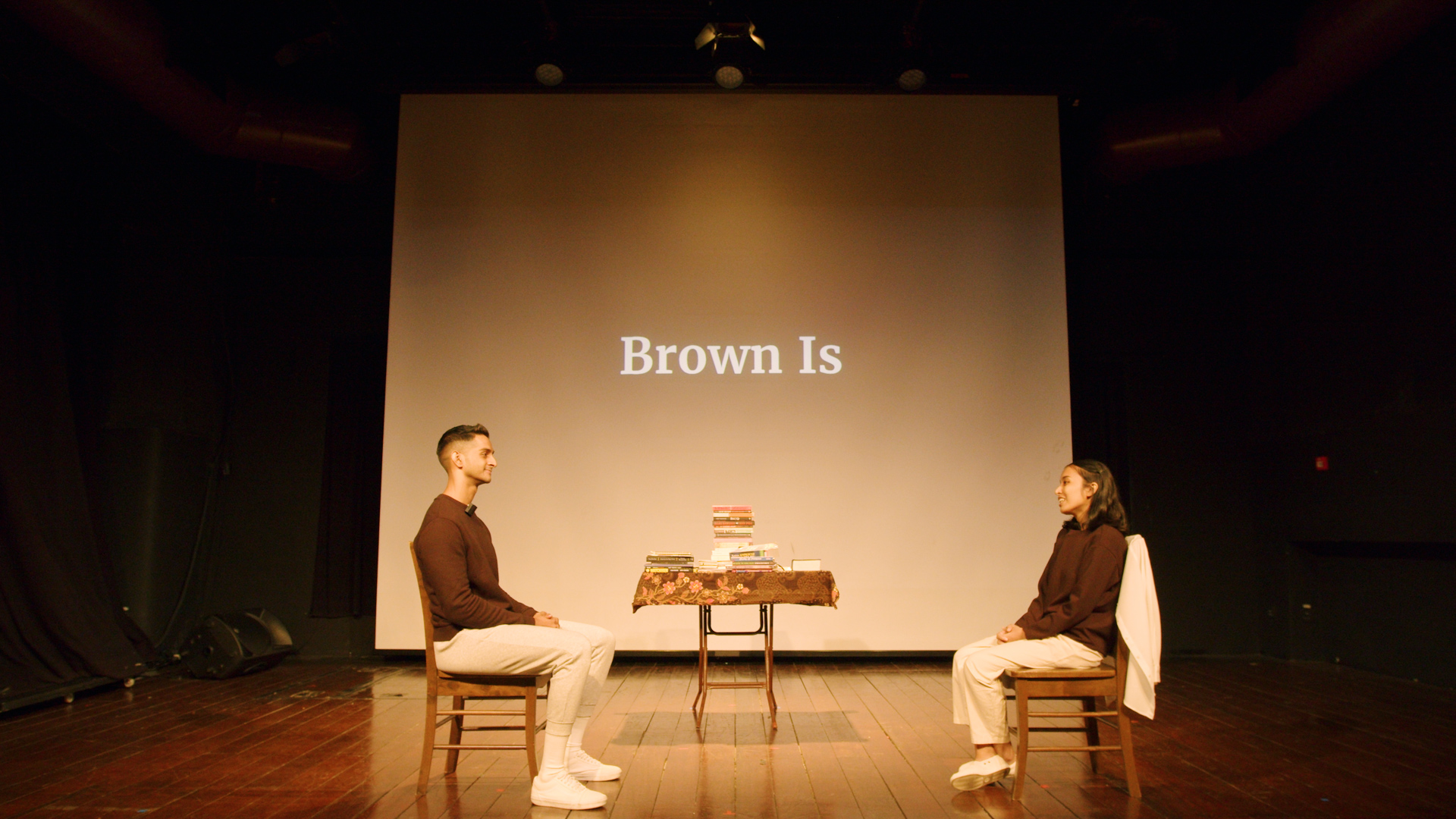 Much of the performance-lecture centres on unearthing hidden truths about being a minority that actually lie in plain sight. They liken the interaction with minorities to the act of eating roti prata, where we have this urge to fully submerge each piece into a warm, inviting plate of curry. But what we actually do is just dip it far enough to not have our hands stained by the curry, enjoying it without fully engaging with it. 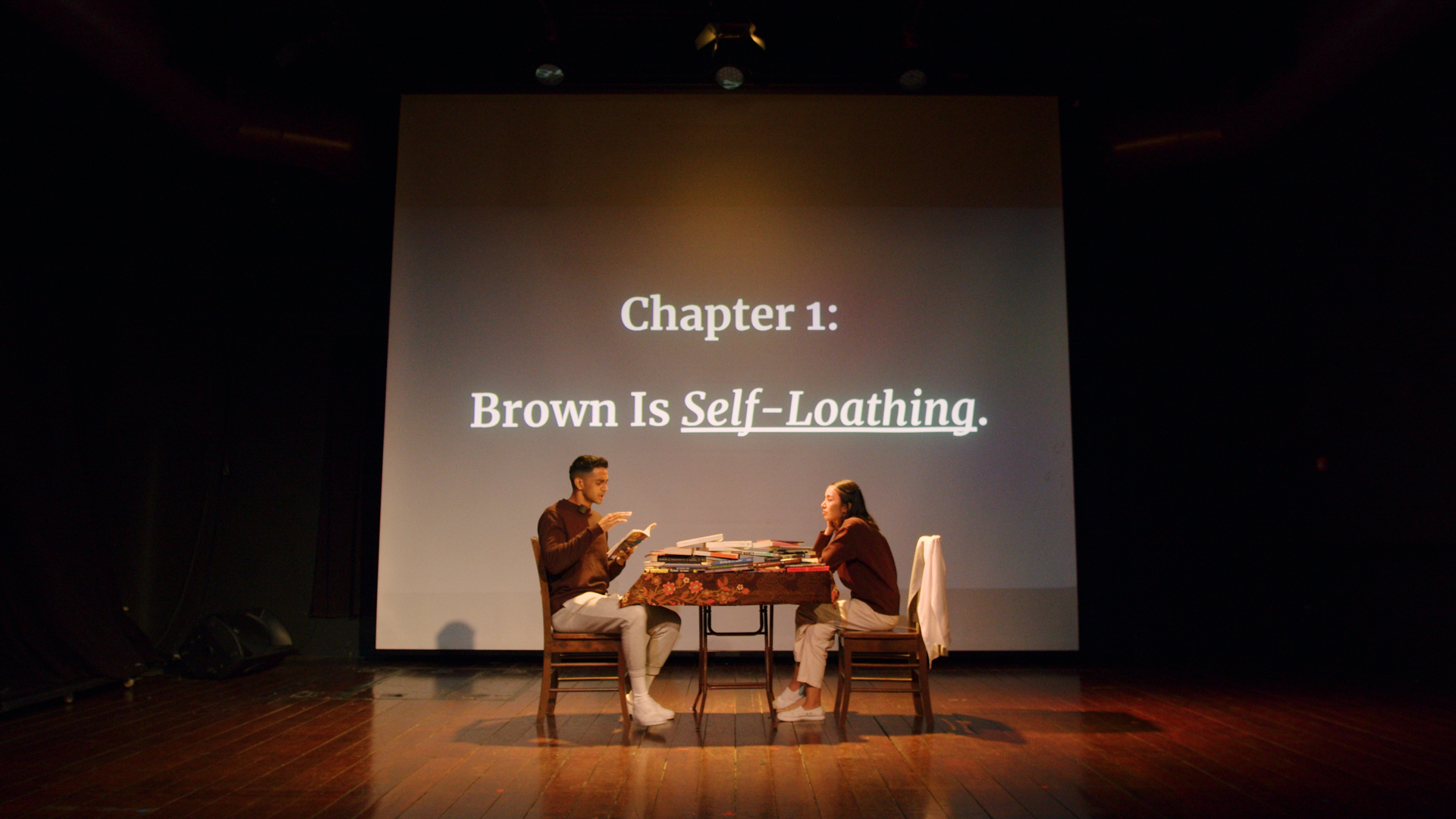 The aim then, of Brown is Haram, is to push us into moving past our shallow misconceptions, and start having real conversations so we have a deeper understanding of race relations in Singapore. Even seemingly innocent scenes, like the coffeeshop aunty speaking Chinese to a brown person, can sometimes feel like a micro-aggression, based on the assumption that everyone can speak Chinese. They wonder if, in such cases, we should let these slide and give them the benefit of the doubt. 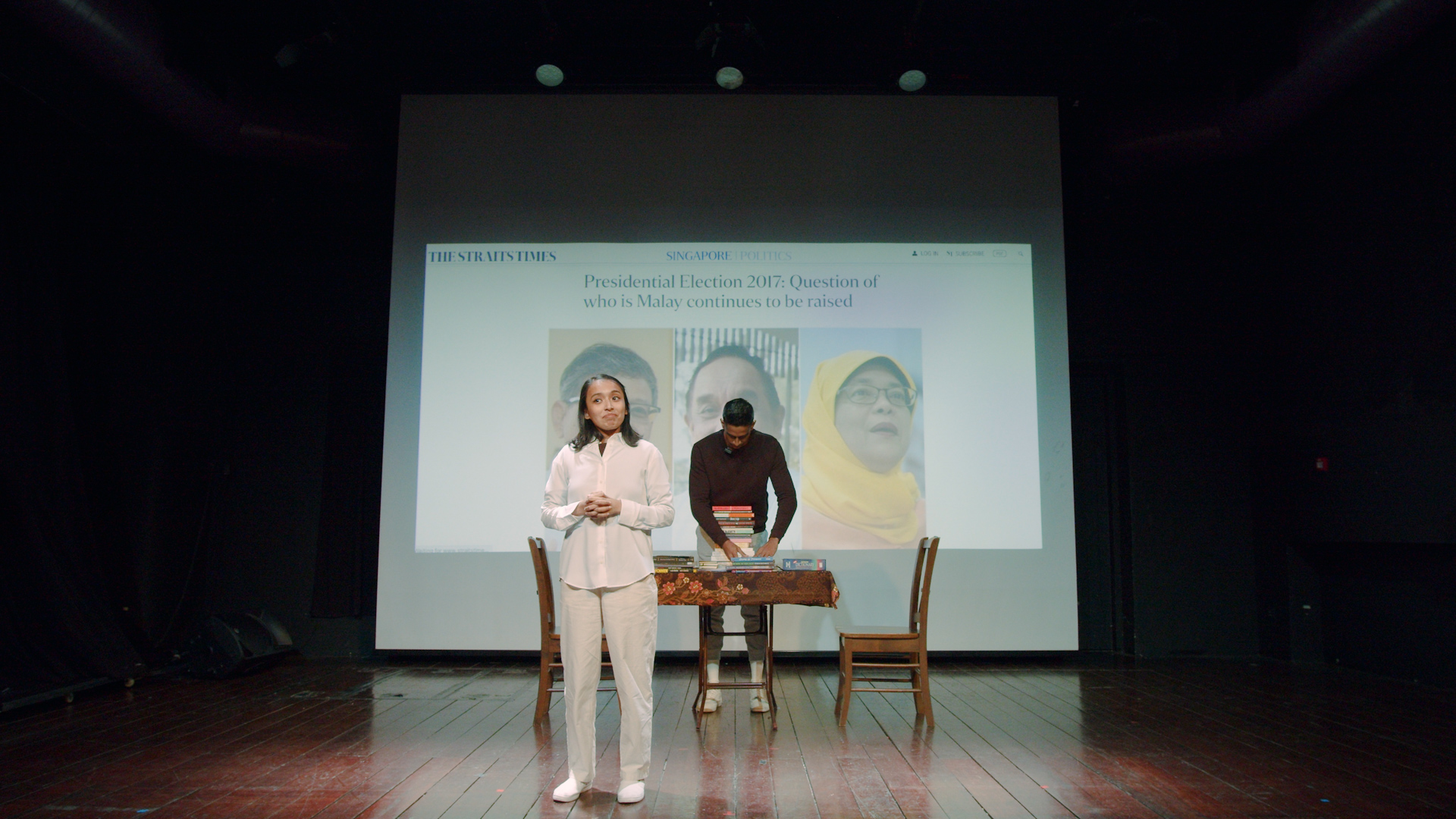 The performance never shies away from difficult issues, whether it’s the conflict between how muslim women ‘should’ dress and how she wants to express herself, or how it seems minorities need to be especially outstanding to be considered a success story – take President Halimah Yacob, for instance, as a model brown woman. We even watch as they present a case study of a poor Malay woman interrogated on the spot, the questions framed in a way to spotlight her destitute nature and evoke pity, and making us realise that they have to present themselves in such a light to get the financial aid they need. All of these are rooted in stories and anecdotes from real life, making them all the more relevant and urgent. 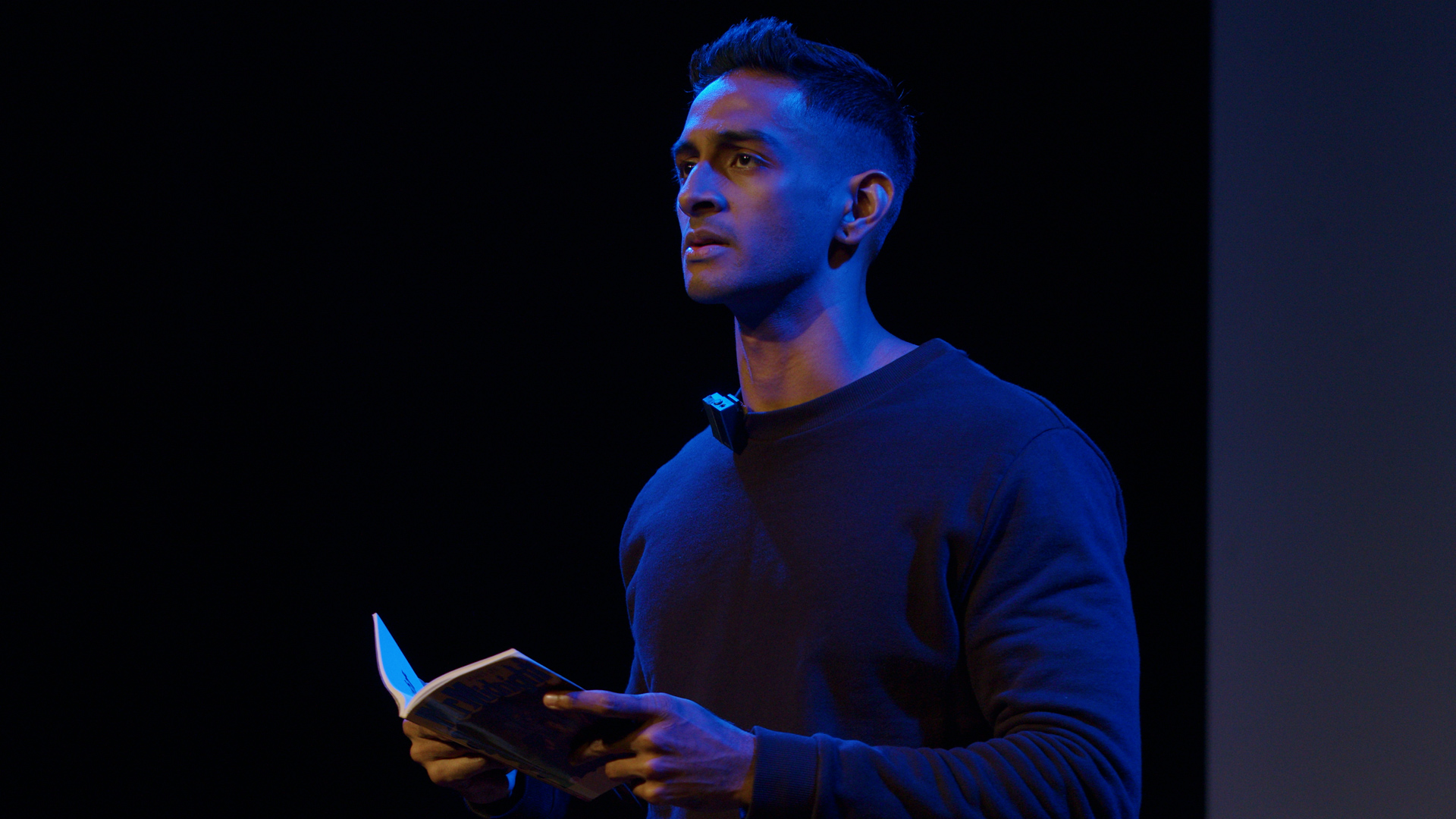 How then do we bridge the gap and start talking about these issues with the general public? Watching as Kristian passes a book to Mysara, we see it symbolic of the need to educate and share knowledge. But beyond being booksmart, Brown Is Haram also pushes the need for more space to learn, to have mutual respect, and always be aware that we are on this lifelong learning journey to expand our understanding of others. 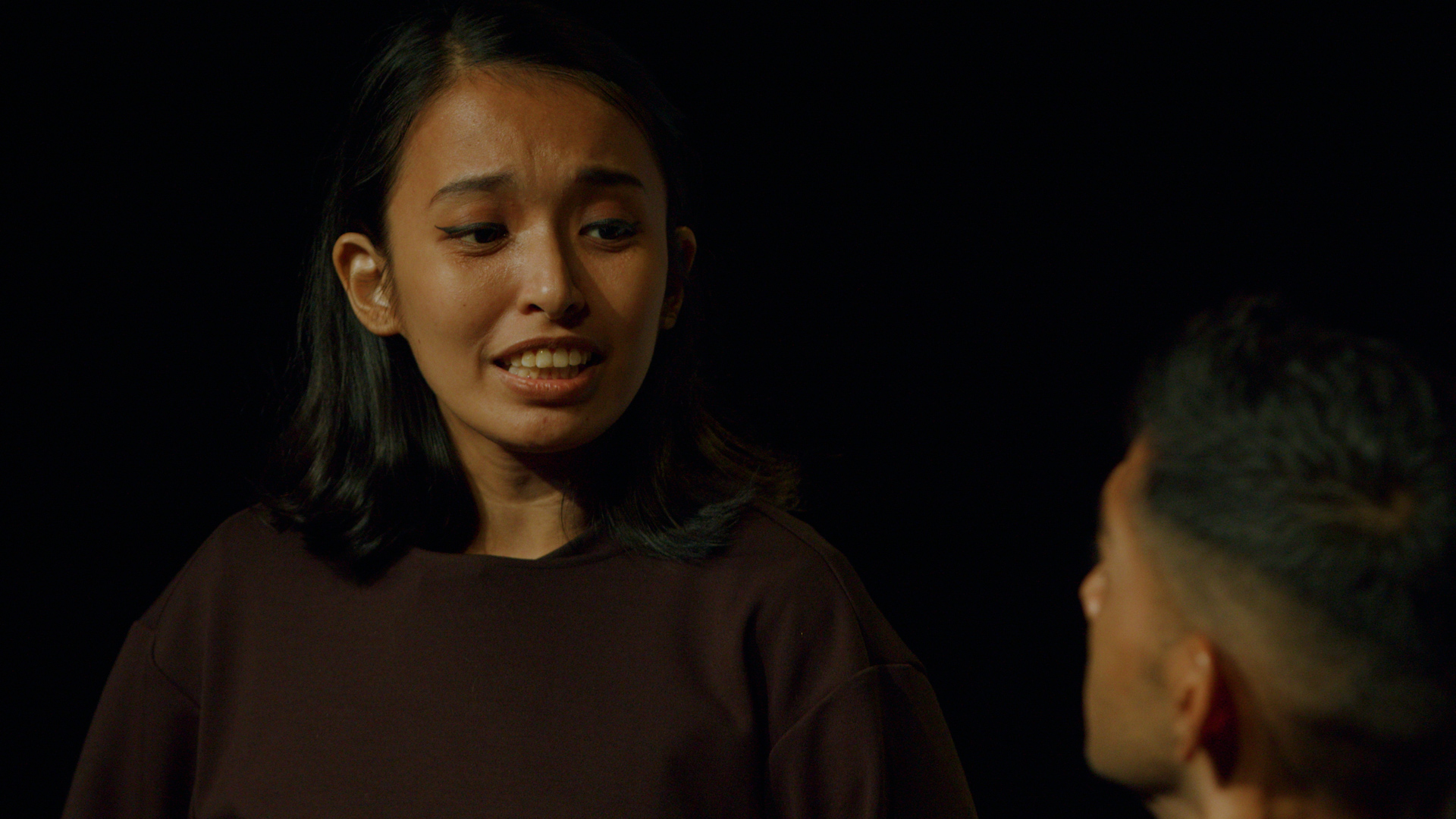 To have these real conversations then, we must be willing to let go of our selective hearing, and listen to the voices around us. We hear them now, loud and clear in this show, but will we continue to do that once we exit, and is society moving in the right direction? By the end of the performance, we see Kristian and Mysara onstage, two people just being themselves and asking to be heard, to have a conversation, and to communicate their thoughts and feelings to us, and emerge as a more compassionate society. 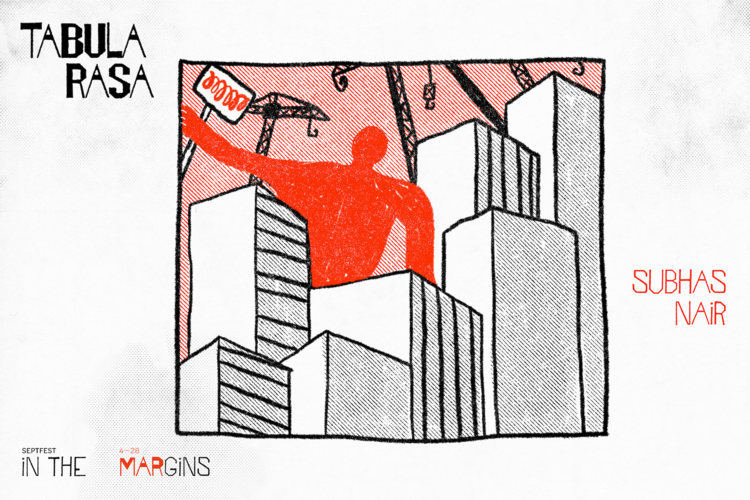 In the second part of our evening, musician and songwriter Subhas Nair presented Tabula Rasa, a performance that doubled as a preview of his upcoming album of the same name. Comprising eight songs, the conceptual album looks at erasure in the city and interrogates the power play in writing of our narratives, dealing with stories of gentrification, language theft, racist policies and the displacement of identities in Singapore. 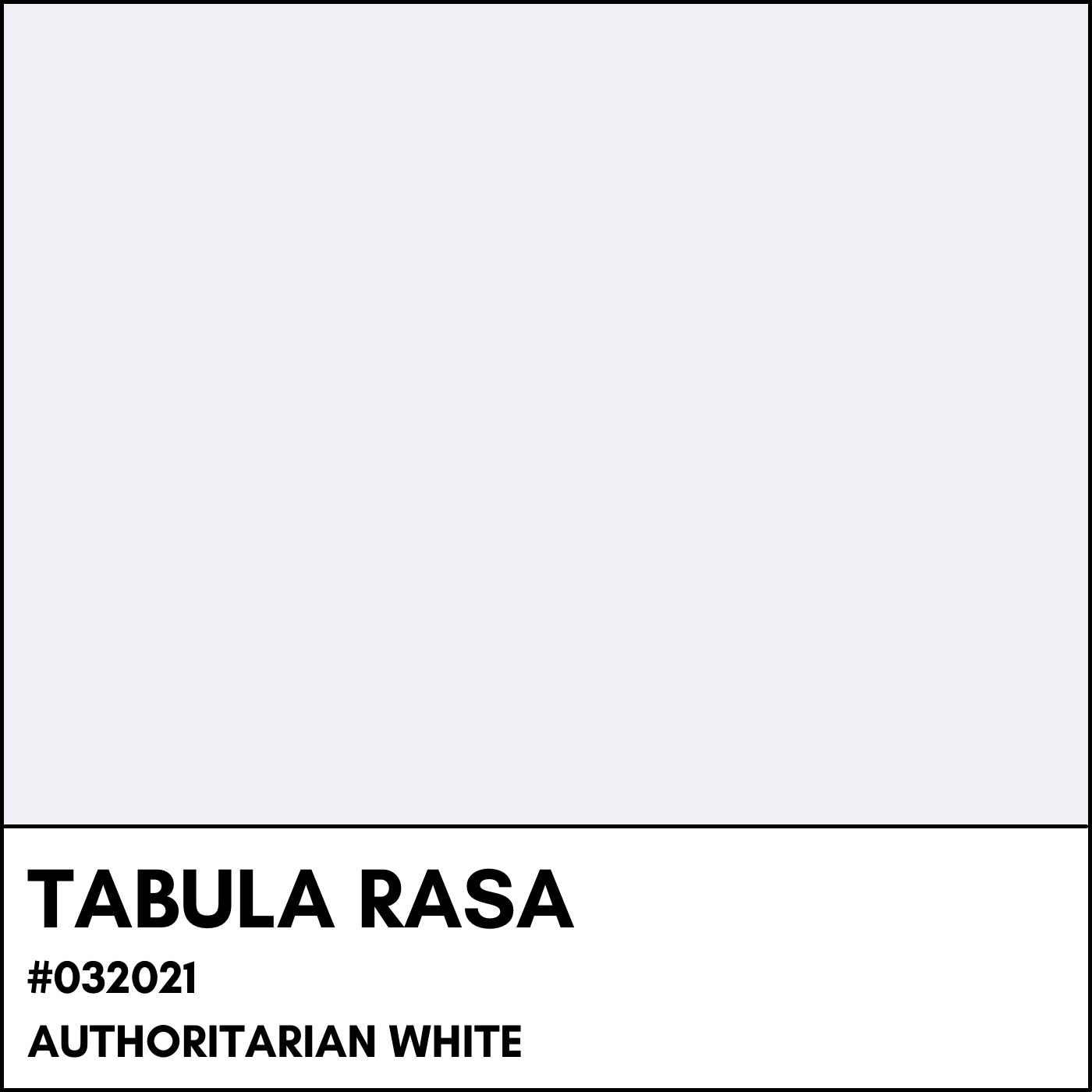 The way Subhas does this however, isn’t purely through rhetoric and speech alone, but by telling his own personal stories.  Subhas begins by coming onstage and singing ‘Tell Me Who I Am’ (with pre-recorded vocals by ArunDitha) as he tries to wash off the red paint splashed on a gated ‘front door’. The two artists begin to rap about the idea of destiny, as he wonders how to change his life for the better if it is already ‘written on the head’. 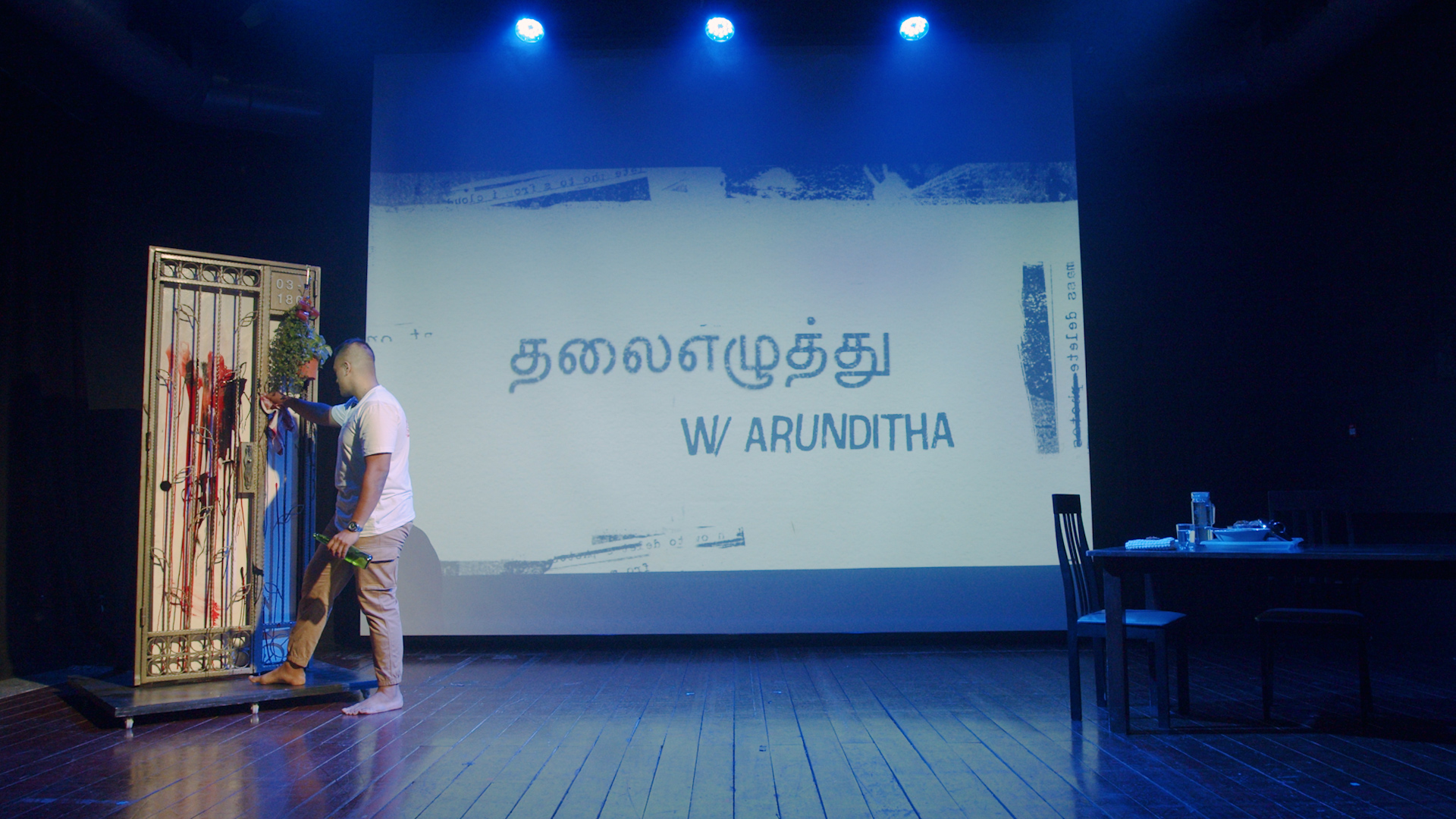 Segueing into his song ‘Feeling’, Subhas dives into his family dynamics, getting personal as he shares about the radio silence from himself and his sister (Preeti Nair, aka Preetipls) over the last few months. He reveals that their father passed away in November, and how in this sombre period, he reflected on his regrets, his family, and their relationship with one another, wondering what would come next.

He elaborates on this with a reflection on the unique tradition of eating with one’s bare hands, especially during family meal times. Nothing can replace the feeling of scooping it all up into a single mouthful and tasting it all at once, and the scent that lingers on one’s fingers after. These vivid images come together in the song ‘Those Hands’, once again featuring ArunDitha’s vocals. 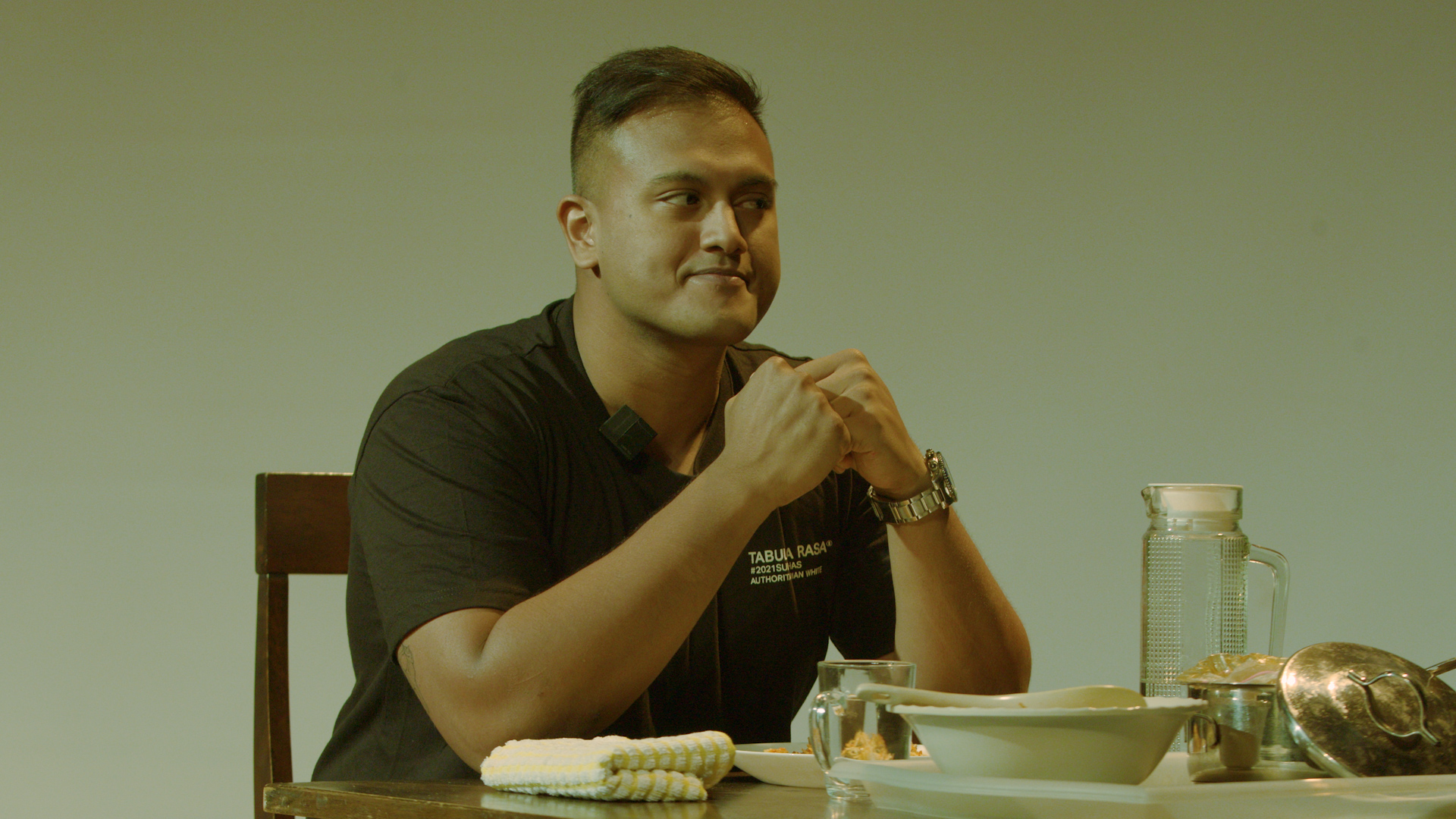 In essence, Tabula Rasa is like reading a book on Subhas’ life, as he speaks of the prejudice and misconceptions against him, and this constant search for a better life. In the song ‘Bhasa’, blues and jazz and hip-hop and rap come together, a metaphor for the sum of his life experiences. He recalls the police visiting him in 2019, after their controversial video, and he questions what are the proper feedback channels we have left. Speaking up seems to result only in being policed, creating a constant climate of fear, as he sings in ‘Who Said?’.

In sharing that his family has never owned a house, he reveals the strange irony of renting a house in Toh Yi Drive (known as a wealthy area). There is clear frustration in his voice when he explains how he’s been rejected by HDB time and again, expressed through his song ‘White Collar Crimes’, fighting for his needs to be heard and recognised. 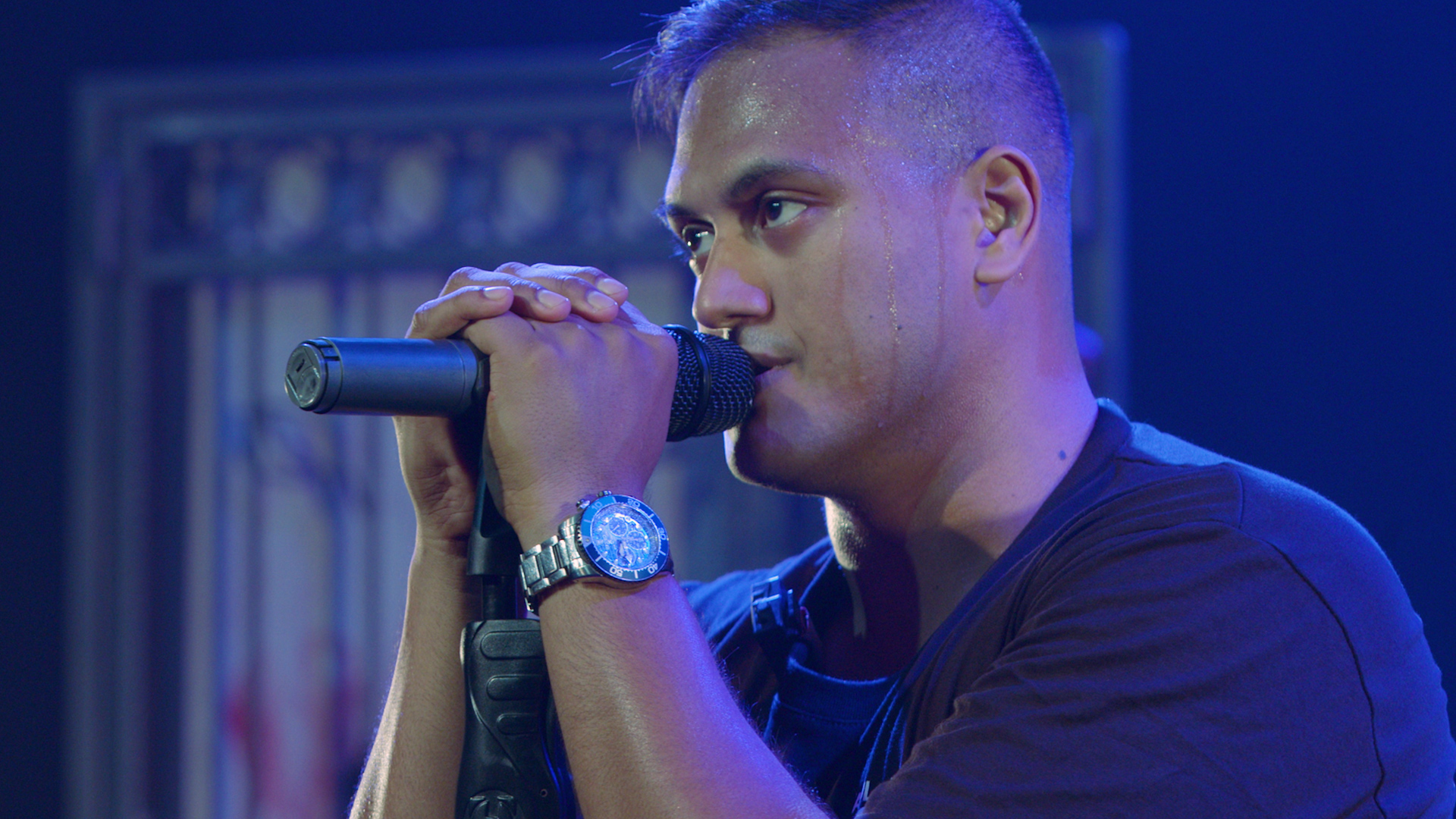 But it seems his prayers are recognised, as he arrives at a new space, a new home and a new life, finally owning his own house. “Life is one big dance,” he says, before singing ‘Don’t’, expressing the ups and downs in life. And to watch him enjoying the process of making music, being onstage and singing, we realise that whether or not we agree with his views or politics, this is an artist who is incredibly passionate about what he does.

Credit should be given where it is due, and across all his songs, there is good mixing coupled with evident heart and soul that has been poured into the lyrics and performance. Subhas has a big personality that speaks volumes, and combined with his talent, gives him the potential to shine as a unique voice in the scene with something to say. 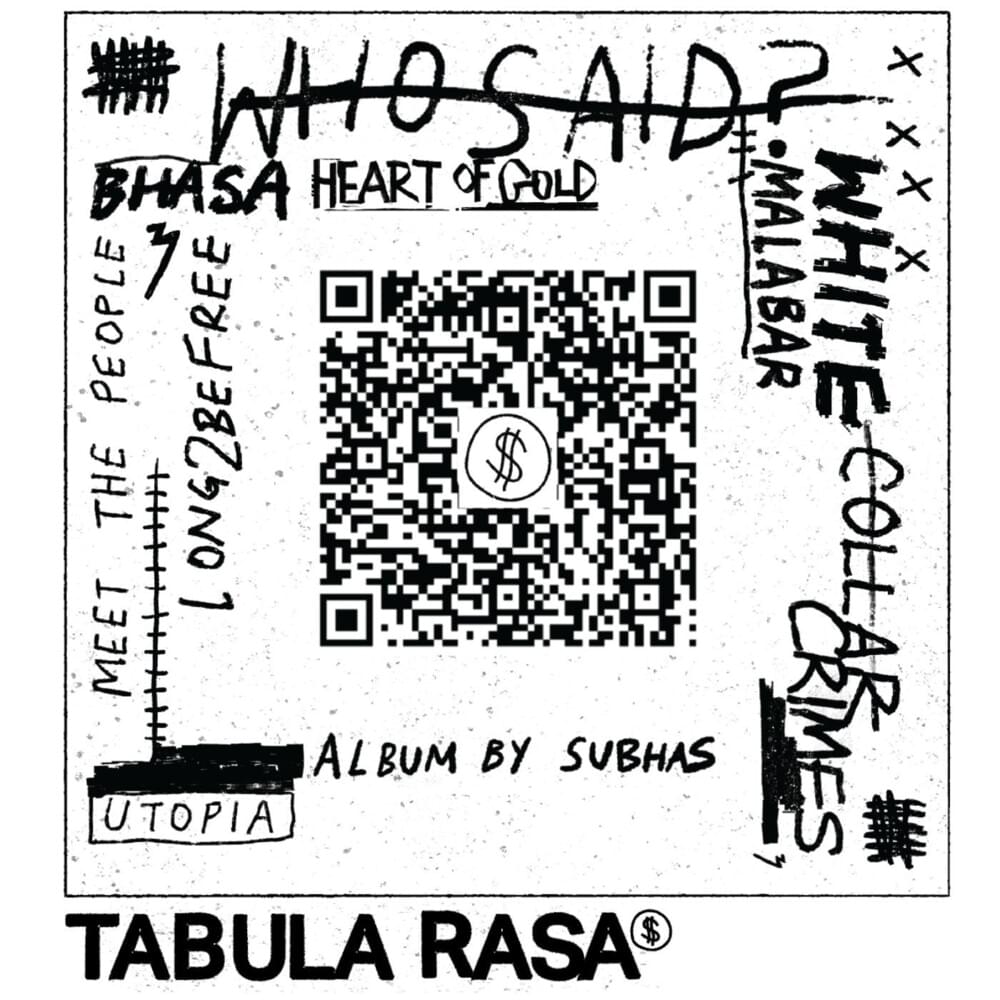 Still on the topic of houses and homes, he now segues into giving back to the community, as he performs the song ‘Utopia’, which was made with a band comprising migrant workers. The song discusses how they come into our country, and how we don’t seem to take care of them despite them having literally built our city, reminding us of the need for more compassion in our country.

What is left by the end of the show is Subhas as a blank slate, the ‘tabula rasa’ of the album’s title. Even his Instagram starts off on a clean slate, having deleted everything except for posts relating to Tabula Rasa, reflecting his desire and willingness to start over and write himself a new future and be a better person. We wonder if he can still smell the scent of the past on his hands, wonder about his family and his life, and how he can possibly leave all his burdens behind. But for now at least, as he sings the final song ‘Heart of Gold’, we watch as everything on stage is cleared out and stripped down, decluttering the space as he has decluttered his life. Alone on the empty stage, we hear his story loud and clear, and stand ready for the rebirth of Subhas.

0 comments on “SeptFest Week 2: Brown Is Haram and Tabula Rasa”