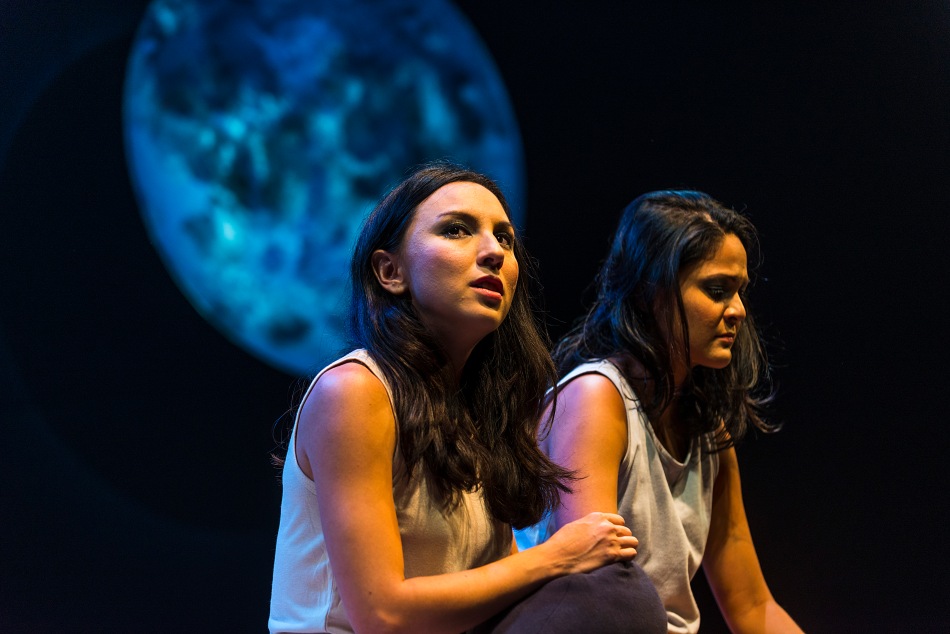 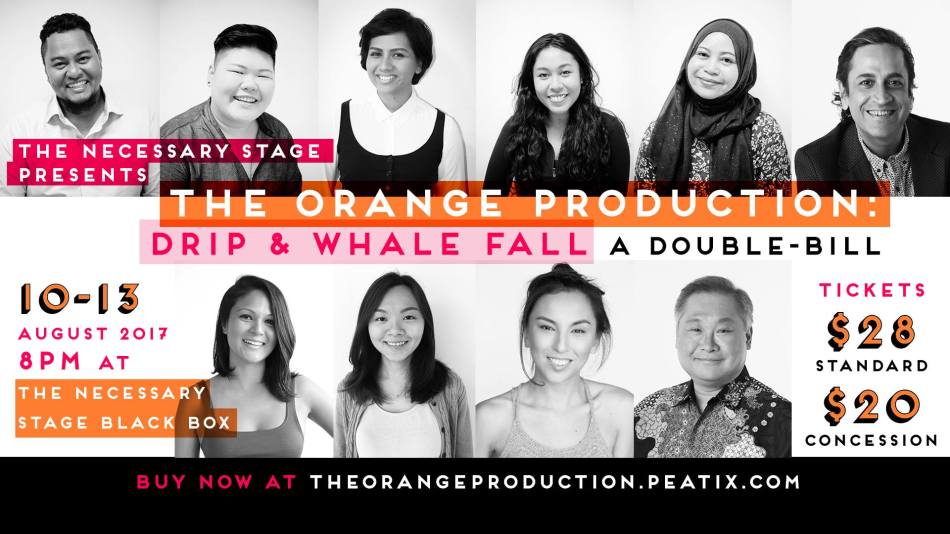 Even amidst the madcap restagings and new productions as part of their 30th anniversary, The Necessary Stage has been spending the last few months nurturing and developing new scripts for the stage. This week, The Orange Production is the result of that, presenting two all new plays from writers Nabilah Said with Drip, and Faith Ng with Whale Fall. Check out our review of these new plays below! 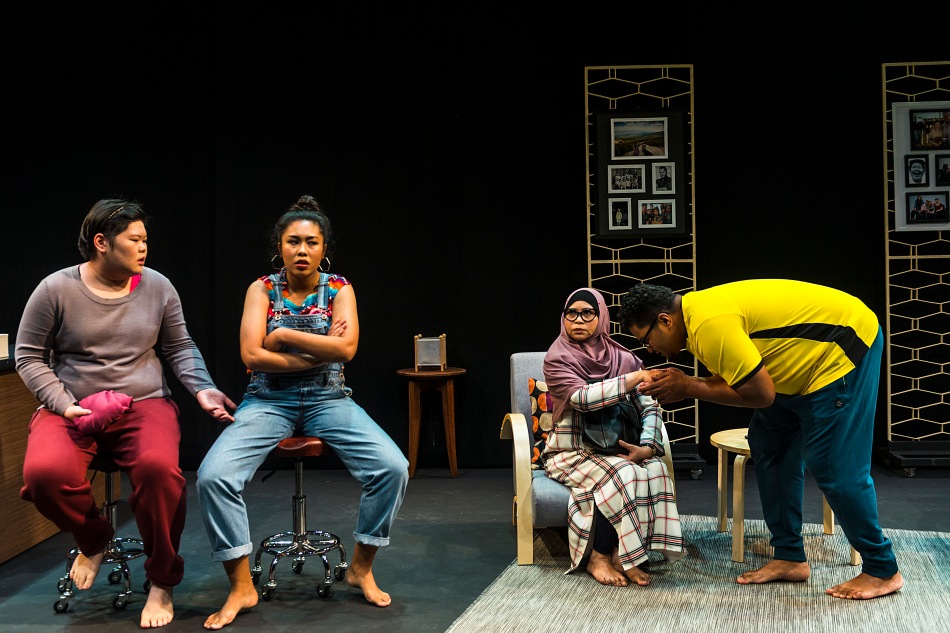 Directed by Haresh Sharma, Drip follows an afternoon in the life of married interracial couple Azam (Faizal Abdullah) and Xiaoyan (Deonn Yang). A day meant to be spent nursing his hangover after a wild party the night before, their peace and quiet are interrupted by the visit of Azam’s sister Ana (Shafiqhah Efandi) and worst of all – his strict, overbearing mother (Nurijah Sahat) to check up on their halal lifestyle. 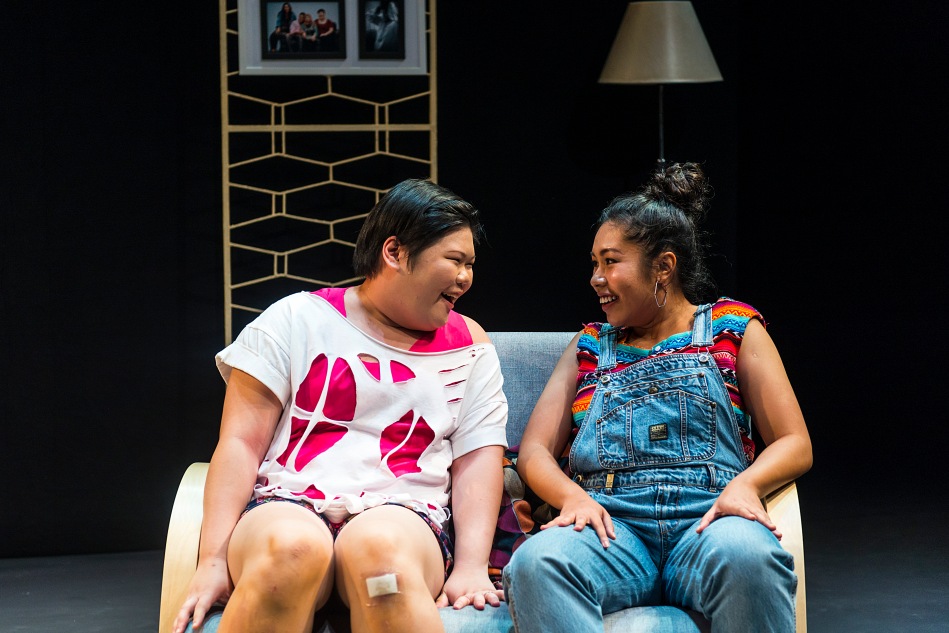 On its surface, Drip is a fun, farcical family comedy that’s full of light moments from each and every one of the cast members, often at each other’s expense as they throw backhanded insults at each other and joke around. There’s even a couple of moments that Haresh Sharma transforms into a parody of Suria TV dramas for hilarious overwrought effect. But as the play progresses swiftly, the deluge of secrets the family attempts to keep under lock and key begins to leak out in drips and drops, dissolving the sitcom like facade to release the floodgates of drama, revealing the delicate nature of relationships and how differently religion and all its hypocrisies can be interpreted even within a small family. 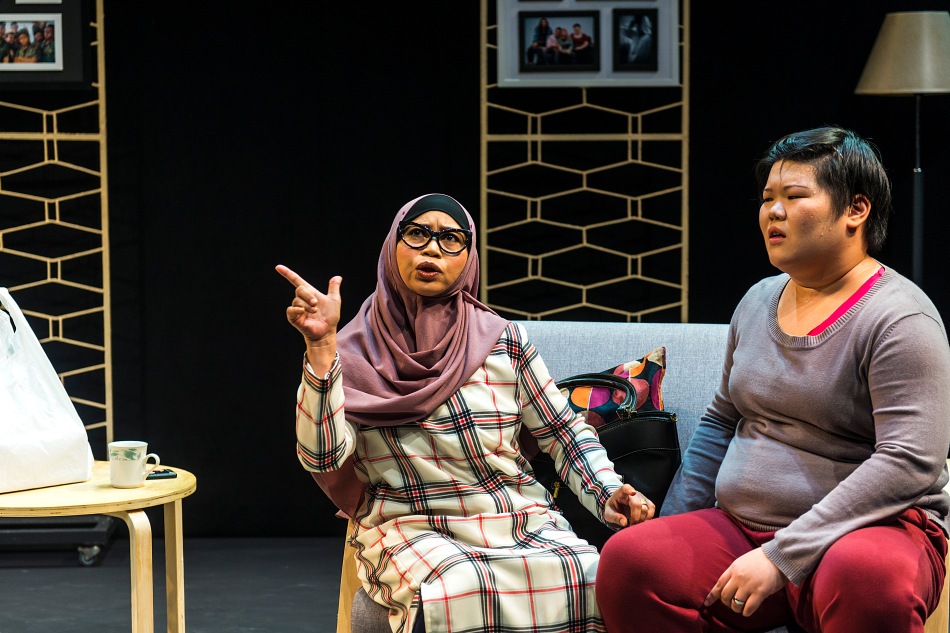 Nabilah Said has a firm grasp of humour and dramatic tension, and cleverly uses language as a tool to both identity and to be wielded as a weapon of exclusion, easily brought out by her well written characters who each have their moment to shine. Nurijah Sahat, in particular, is a tour de force of passive-aggressive matriarchy, a whirlwind of unsolicited advice and criticisms as she barges her way into the house and begins commenting on each and every little detail, an absolute joy to watch as her expressive face exaggerates and displays her every reaction, increasingly horrified as she realises just how haram her family has become. 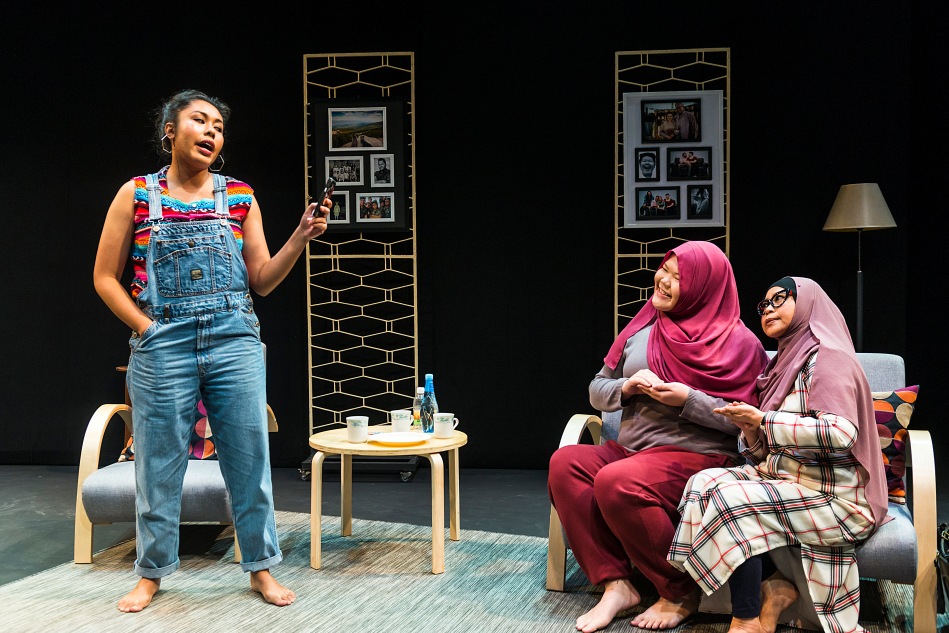 Meanwhile, Shafiqhah Efandi perfectly encapsulates her character of the black sheep of the family, always falling into the shadow of her brother no matter her little victories while putting up a brave front. Deonn Yang’s Xiao Yan is constantly, hopelessly trying her best to be a good convert, yet constantly fails, often tripping up on her limited bahasa melayu and providing plenty of opportunities for laughs, and even manages to strike a (hungry) chord with us as she expresses her sudden cravings for all things pork related. 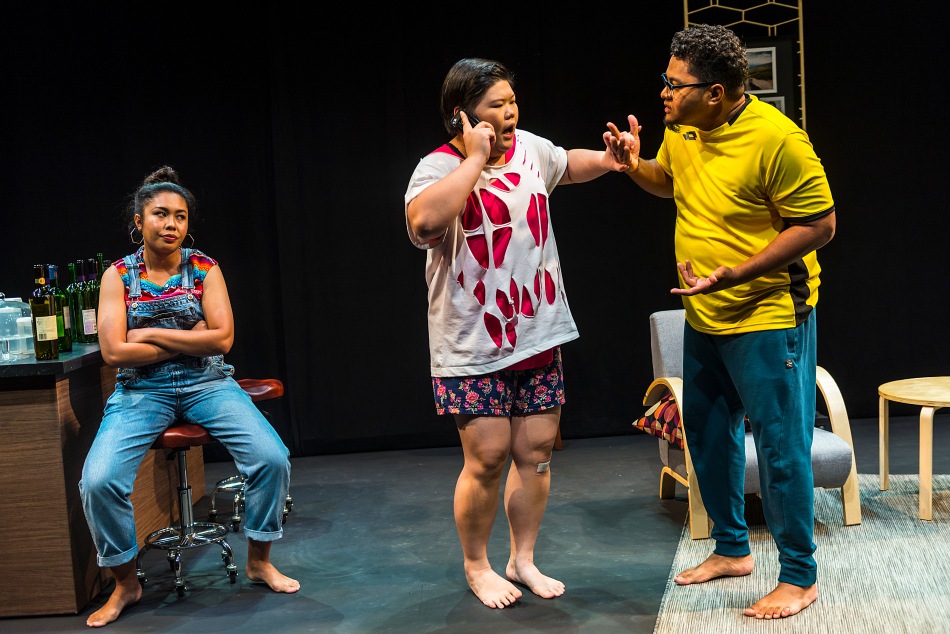 Azy Alias’ set here is a simple one, showing only the absolute essential aspects of a living room and kitchen scene to make it realistic while still leaving enough to the imagination, and adorns the ‘walls’ with adorable family photos that suggest a depth and history to each of these characters.

Through Drip, Nabilah Said has crafted a highly accessible, approachable work that will make you both laugh and reflect on the flaws and imperfections in each person’s interpretation of religion, where ultimately, there is no one right answer. Instead, these alternative views form an amalgamation of views that makes up a community of individuals, each with their own backstory and bringing something different to the table, well presented in this relevant, relatable and necessary piece. 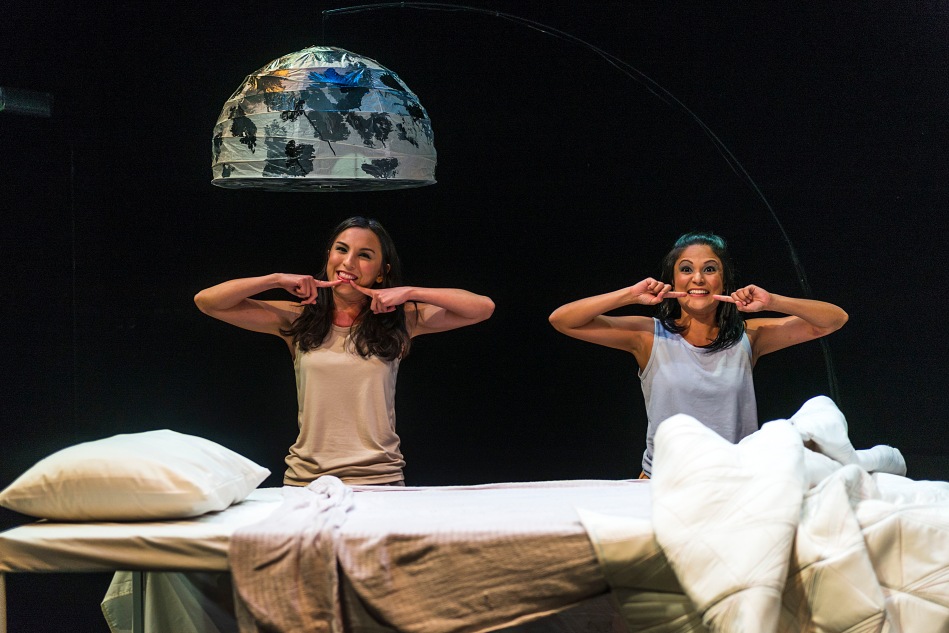 Directed by Alvin Tan, Whale Fall is a decidedly different work from Faith Ng’s previous repertoire. Whale Fall is a rather abstract, multilayered work that dissects the relationship and personality of two friends, and what initially appears to be a straightforward piece transforms into what feels like an extended improv performance between two actors. And yes, a whale does quite literally fall from the ceiling at some point. 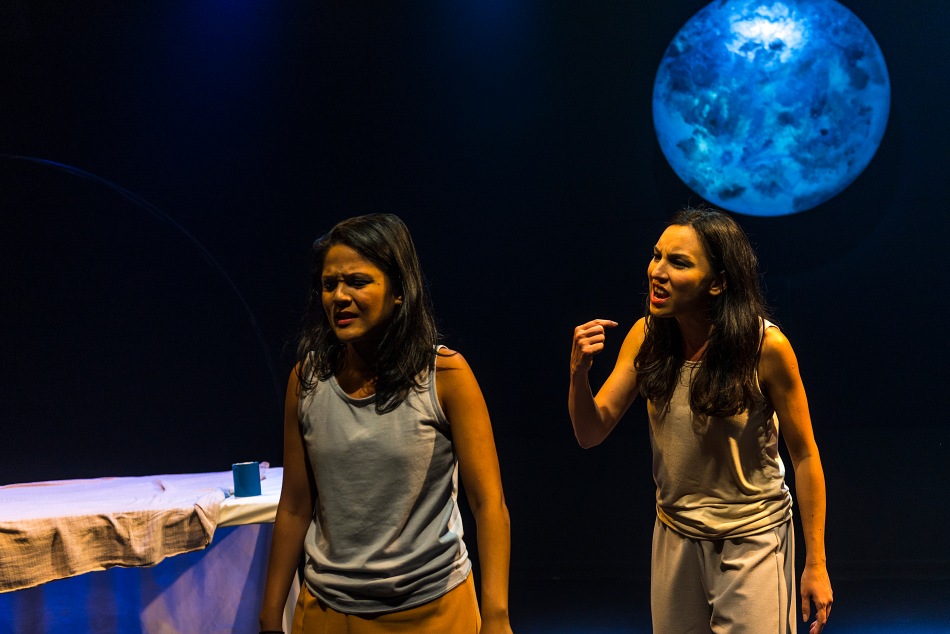 J (Jeane Reveendran) has been in bed for an entire weekend, and best friend L (Liz Lazan) finds it impossible to pull her out of bed. But just as you think the narrative continues normally from there, Faith pulls the rug from under the audience and thrusts them into a decidedly more dreamlike, almost Beckettian world, where the borders of reality and fiction are blurred and both women find themselves on a journey through their imagination as they engage in both silly and serious theatre exercises, working through their own shared and individual family histories to reveal an innate sorrow in their lives that’s been bubbling just beneath the surface the whole time.

Azy Alias’ minimalist set is hauntingly beautiful, with a gigantic, mysterious full moon at the centre of the stage that serves no practical, diegetic purpose, but evokes a creeping sense of doom as a symbol of tidal shifts and constant change as one of the girls remarks how nice it would be if everything stayed the same forever, where one would never be happy, but also, never be sad. Both Jeane Raveendran and Liz Lazan are capable actors, easily shifting from the more light-hearted segments to bringing across the darkness that lies in their pasts, translating that not only through their words but also their actions. A simple act of passing sweets to each other, for example, goes from hospitable to hostile in a matter of moments, underscoring the unresolved frustrations the women continue to possess both within themselves and between each other. 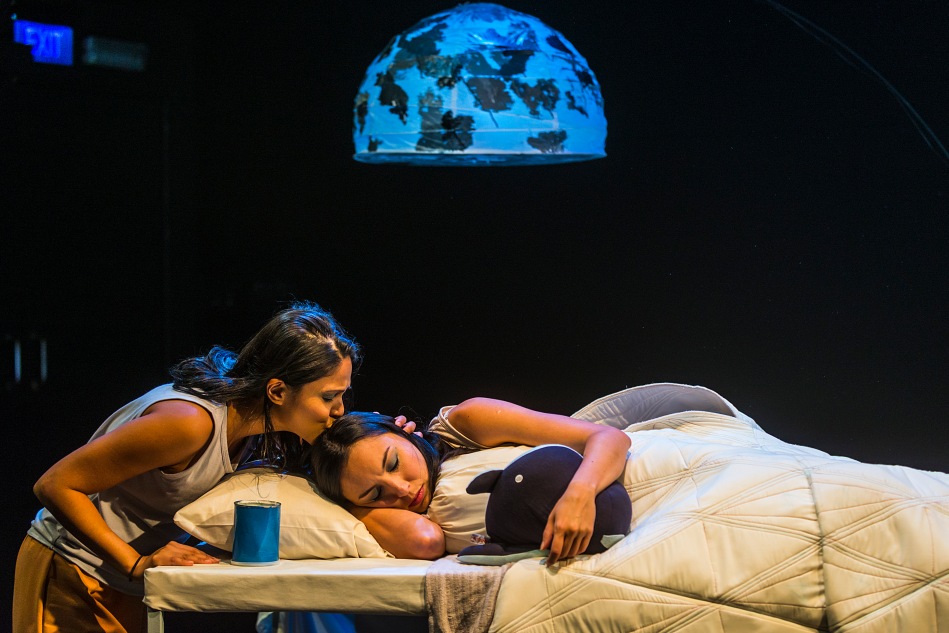 Whale Fall is a poignant, affecting, play that deconstructs the concept of modern day depression and uses it as the starting point to paint an evocative, oneiric environment emanating with melancholia that both explains and expresses the mood that one feels on days you just can’t get out of bed. Ultimately, as the blue lamp goes off in the final moments of the play and the stage sinks back into inky black darkness, Whale Fall ends on a hopeful note, that as cyclical as it all is, we will all manage to move on in some way and things do get better.

The Orange Production plays from 10th – 13th August at the Necessary Stage Black Box. Tickets are now sold out.

0 comments on “Review: The Orange Production by The Necessary Stage”