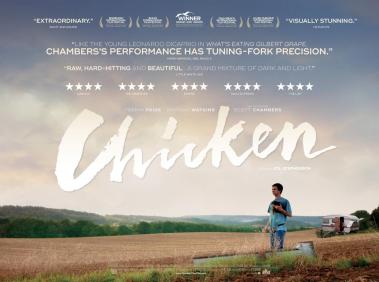 Adapted from Freddie Machin’s play of the same name, Chicken marks a stunning debut for director Joe Stephenson and a powerful start into the realm of indie film. Making the leap in medium from stage to screen can be awkward in the hands of a lesser director, but Stephenson imbues his film with such a keen lust for life and a loving, pastoral beauty that one can only watch in wonder as the coming of age story unfolds before us.

Chicken makes for an incredibly strong breakthrough film for actor Scott Chambers, who plays our protagonist Richard. Richard is a sensitive fifteen year old boy with learning difficulties living in a caravan with his older brother Polly (Morgan Watkins). What is initially an idyllic lifestyle is thrust into turmoil as Richard befriends Annabell (Yasmin Paige), whose family has acquired the farmlands he and his brother reside on, and increasing tensions between the two siblings lead to some grisly fights and the unveiling of some uncomfortable skeletons in the closet.

Scott Chambers is a constant light in the film, and his performance is what anchors and endears us to it. Chambers is a real star in the making as he adroitly brings across a purity and simplicity to Richard that one wants to simply reach out and protect him. Always optimistic and lightfooted, Chambers even makes the scenes where he talks to his beloved chicken Fiona completely believable, a genuine quality to his performance that makes the scene feel as natural as if he were talking to an actual person. 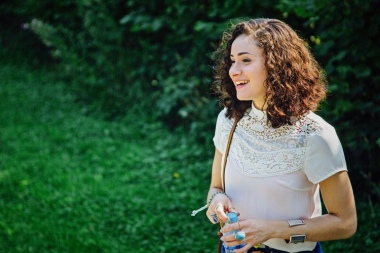 Chambers shares a wonderfully likeable chemistry with co-star Yasmin Paige, whose brash loaded words and double meanings get lost on the innocent Richard. Initially infantilizing Richard and treating him as nothing more than a child, the relationship grows and matures with the film, and if anything, evolves into an authentic form of friendship, with real care and concern for Richard’s well-being brought out by Paige’s performance that shifts from spoilt bully to true friend.

Meanwhile, Morgan Waites wears a perpetual scowl as Richard’s loose cannon, older brother Polly. Initially poised as an washed out antagonist, alcoholic and drunkenly sidling up to girls, there’s little to love about his character as he flies into violent fits of unbridled rage and makes plans to abandon the dysfunctional siblingship once and for all. But Waites isn’t simply playing a character you love to hate; he brings out the subtle nuances of Polly that make you completely understand the position he’s coming from, and disagree as you might with his actions, the final unveiling in the film’s dramatic denouement is a painful one, as Waites fights back tears and the trauma of revisiting disturbing incidents in his childhood, a man as much a victim of his circumstances as he is master of his own fate.

Whether its the lush green of the woods or the cold, fresh dawn of a new day, Joe Stephenson’s cinematography is a marvel, celebrating the quiet beauty of the countryside in each of his shots. Even a car scrapyard can become a thing of beauty in the hands of Stephenson. Stephenson is a mature enough director to understand how to capture psychological distress, with rapid cuts of a visibly broken Richard cycling through as he clutches his head in shock. There’s a richness and depth to the world of Chicken that Stephenson is able to capture, and at times he allows for the ambient noise of the environment to serve as his soundtrack, natural sounds that only contribute to our idyllic world view as seen through Richard’s eyes.

Chicken is a poignant, sincere adaptation of a solid story that oozes with talent from the incredible acting from its cast. It’s hard not to fall in love with this film, and cry out in horror when it hurts you in the most unexpected and shocking of ways. Chicken is a promising debut from a new director that feels like a product of the very best years from the emergence of the British indie flick, and is a film that will give you hope, not only in the persistence of the human spirit, but also in the future of indie cinema.