Featuring 38 diverse local artists who have all showed at the Esplanade at some point in the last 15 years, 80by80 is the latest event in the Esplanade’s visual arts calendar. Each of these artists have generously contributed a single work, constrained only by the dimensional requirements of 80cm x 80 cm (hence the exhibition’s name), and the resulting works have been arranged across the entirety of the Tunnel’s exhibition space. 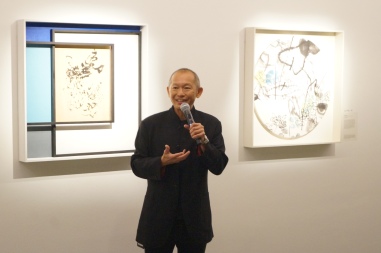 At the opening, Esplanade CEO Benson Puah spoke of the significance of holding the exhibition in such a space. In its initial years, members of the public balked at the Esplanade encompassing and displaying visual art in its non-traditional space; whether it was the Jendela, the Concourse or the Tunnel, these alternative spaces felt unprofessional and unusual, and people were slow on the uptake. Yet at the same time, precisely because these spaces were so different from the usual white galleries one thinks of when it comes to art exhibitions, they became an incredibly accessible type of gallery that easily reached out to the public and helped its artist gain, at the very least, a strong level of visual exposure to passers-by.

This aim to reach out to the public now comes full circle with 80by80: each of these 38 works have been put up for auction online, and members of the public have until 19th November 2017 to bid for artworks they wish to purchase. All proceeds from the auction will go towards future development of the Esplanade, particularly with regard to the free programmes the venue will continue to offer. We’ve selected five of our personal favourite pieces from the exhibition to feature in this post, read more about them below:

Taking its name from the eponymous Esplanade gallery, Jendela is based off an earlier work that Yeo presented in the Jendela in 2008, where he created a ‘tangible’ shadow cast on the gallery floor that referred to the shadow cast by the unique structure of Jendela. This would go on to become a recurring theme in some of his works, where he would consider extending the concept and replicating the resulting shadow in other formations. Here, there is a multitude of layers and textures despite the work’s seemingly monochromatic tone, and makes for a fascinating visual wonder one can look at and consider time and time again.

Yeo Chee Kiong presented solo exhibitions The House (2007) at the Jendela and Endless Night (2009) at the Esplanade Concourse, and also participated in These Sacred Things (2015) at the Jendela.

Lot No.11: Let Me Take Care of You (The World of Suzie Wong) by Susie Wong

Subverting the now hackneyed phrase “I love you”, Wong instead chooses to chip away at the fundamental meaning of the phrase to unveil what people really want out of love: someone to take care of them, long after the initial climax and rush of romance has died, and highlighted in bold pink neon lights. The text is taken from the 1960 film, The World of Suzie Wong, which was based on a book by Richard Mason.

Susie Wong presented at These Sacred Things at the Jendela in 2015.

Lot No.15: Conversation with Mondrian & the Trees by Yeo Shih Yun 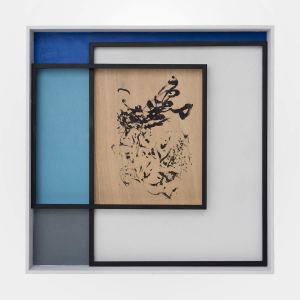 In this work, Yeo melds East and West as she takes Piet Mondrian’s most iconic abstract compositions and brings them into the 3D world using recycled picture frames as black lines, while also inserting a panel depicting inky black trees made with Chinese calligraphy brushes attached to the branches of actual trees as they swayed in the wind. These etchings were then digitized and worked into the piece using silkscreen printing. This work also recalls Yeo’s earlier work Conversations with trees exhibited at the Jendela in 2011.

Reminiscent of the epic, surreal landscapes of Salvador Dali, award winning illustrator Christine Lim presents a strange, lucid dream where everything is in motion yet had ground to a halt, a glimpse into the madness of the unconscious mind as its central figure loses his sense of self, his face erupting with a hole where tropical, multicoloured messenger birds emerge from, and one is both calmed yet disturbed by this pink and blue hued, elusive fever dream.

Christine Lim has a permanent mural, The Gathering, displayed on the walls outside the Esplanade’s Stage Door.

A simple yet stunning landscape piece made with graphite and watercolour paper bringing to mind ancient Chinese myths and legends, the promise of something epic about to unfold as we gaze out upon these conical misty mountains. One feels completely at peace viewing this piece.

Yong Kah Kin has previously participated in Inside (2012) and These Sacred Things (2015) at the Jendela and presented a solo exhibition, Making Sense, at the Esplanade Community Wall in 2012.

Although we’ve featured only five of our personal favourites,  do feel free to come on down and have a look yourself at all 38 pieces; some of them really do make for a nice display in a lobby or hanging in a restaurant in which the online photos don’t do them justice, particularly with regard to the 3D pieces, or those that involve lights. No doubt there’ll be plenty of interested buyers bidding for any one of these fantastic works of art, and we can rest assured that fifteen years later, the Esplanade will still be at the forefront of showcasing new artistic talent to every single member of the public that passes by these underground walls.

80by80 is on display at the Esplanade Tunnel till 3rd January 2018. To view the works in detail and participate in the auction, visit www.esplanade.com/80by80 The auction closes at 23:59 on 19th November 2017, but do note that successful buyers will only be able to collect their purchase after the exhibition closes on 3rd January 2018.