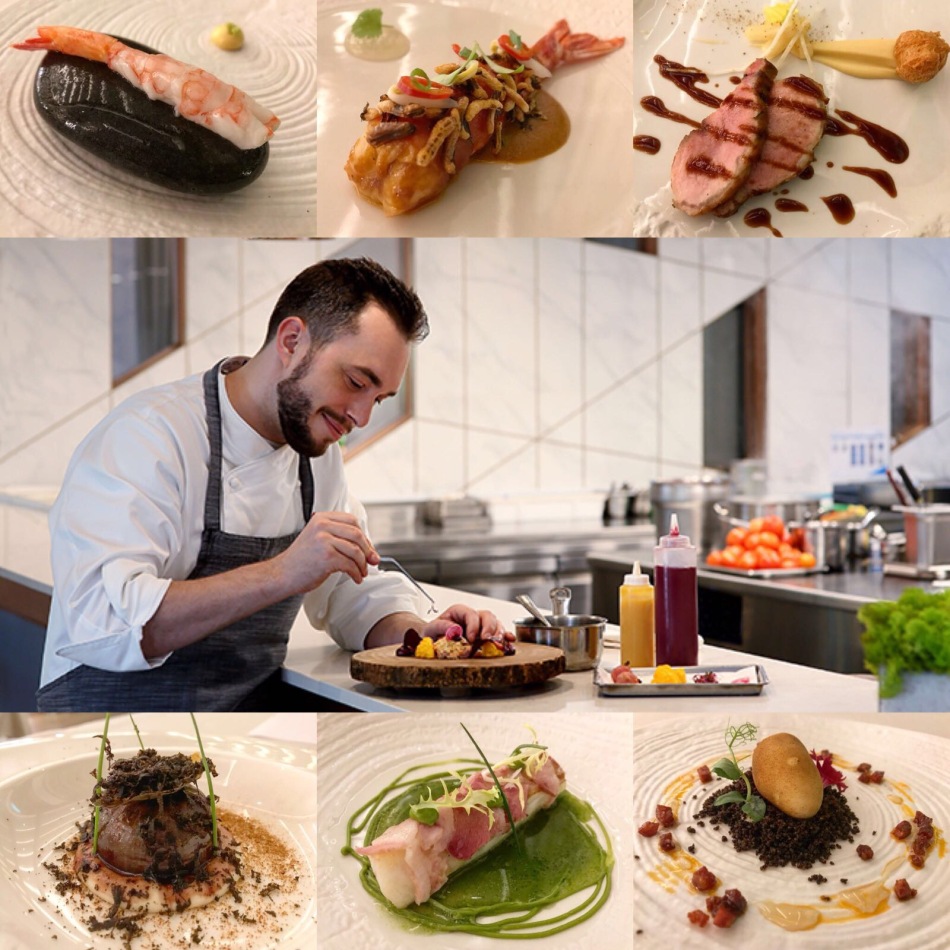 We love art. We also love food. So it makes perfect sense that we’d love a restaurant who serves food that has been so well crafted, so innovative and painstakingly planned out that it naturally, elevates itself to an art form. Besides visiting Resorts World Sentosa for its theatre and for Universal Studios, there’s a plethora of great restaurants available as well, and one we’ve been meaning to try each time we walked by before or after catching a show there is Curate.

Curate is best known for playing host to Art at Curate, where the restaurant brings in Michelin starred chefs from all over the world over the calendar year, giving visitors a chance to savour these tasty meals they might otherwise have to travel to far flung countries to experience. But what we were interested in when we headed down to Curate for dinner last week was in fact, resident chef and rising culinary star Benjamin Halat’s very own menu instead.

Only introduced to RWS this year, Munich born Benjamin Halat is already cooking up a storm at Resorts World Sentosa’s Curate as its Chef de Cuisine. At the young age of 31, Halat has already worked with multiple Michelin-starred restaurants in Germany and Switzerland, and was even personally mentored by two-Michelin Star Chef Diethard Urbansky while working at Restaurant Dallmayr in Munich. A few weeks prior to our dinner, we had a taste of what Halat was capable of at the recently concluded Great Food Festival, and needless to say, we were impressed at what we got a taste of. Changing his menu periodically over the year, we got a chance to try Halat’s latest 8 course menu ($198++), and you can read more about the delicious east-meets-west inspired cuisine Halat has come up with below: 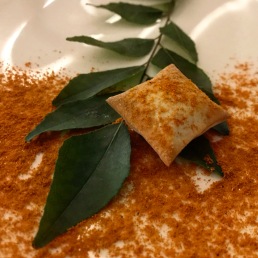 Service at Curate is impeccable, and we were hosted by maitre’d Iza and Victor. Taking the time to introduce us to each item, we started off the evening with Halat’s series of amuse bouches. Literally translated to ‘mouth amusers’, the amuse bouche is a series of tasters meant to introduce diners to the chef’s art of cuisine. From to Iza’s favourite Olive Oil Jelly to Halat’s unique take on our local curry puff, these dishes really tickled all our senses, coming in a diverse range of tastes, textures, spices and flavours. Each item was impeccably plated, including an incredibly creative dish where pieces of marinated tuna sashimi were covered in seaweed and practically camouflaged themselves amongst the bowl of pebbles they were served in, and from the very beginning, we knew dinner was going to be a feast for all the senses.

We began the meal proper with the first dish – the Foie Gras Parfaite. A light start to the meal, the parfaite was topped with finely chopped fresh prawns, and the passion fruit gel complimented the robust flavours of the foie gras, making the dish lighter and an absolute delight to eat.

The next dish was brought out with a real theatrical air. Presented by Chef Halat, the dish began with a bowl of curry leaves, lemongrass, calamansi, ginger and chili as their aroma wafted around the dining table, reminiscent of the scent of a tasty bowl of laksa, and gave the flavourful dish an additional olfactory dimension.

The Braised Oxtail was a feast for the eyes as much as it was for the stomach. Beautifully braised, the oxtail was presented encapsulated in a tender, juicy onion. To top it off, Australian truffles were shaved right at the table to complete the dish, upping the flavour ante by yet another level. The smooth mash base brought the whole dish together, and once one puts it together ox tail, truffles, and onion, was a heavenly spoonful to consume.

Turbot is known as the king of fish, tastier than even cod. But it comes with its challenges. If overcooked, the meat can prove to be tough and dry. But Chef Halat’s treatment of the fish was fantastic, keeping the turbot moist and oily, as the fish sat atop a pig head terrine providing a rich flavour, while the chive puree helped cut through the bold flavour profile beautifully.

Inspired by Bak Kut Teh, this was Chef Halat’s unique take on the humble dish. The Iberico pork used was cooked with absolute accuracy and perfection – moist and pink in the middle while the fat was rendered well to produce a luscious skin, making it probably one of the best Iberico pork chops we’ve ever eaten. Paired with a choux pastry that brought to mind a stick of You Tiao, this was a smart and creative way to pay homage to the traditional dish and was one of our favourites off the menu.

Next up was the Brie de Mauxe. The moment it arrived, we were curious as to what this intriguing looking dish was. Resembling a potato sitting atop a soil patch, there was a playfulness, yet an air of sophistication with the way this dish was presented, proving that Curate is serious about perfection on a plate. At first, these ingredients appear incongruous, but one bite and Chef Halat’s decision to plate them as such becomes clear – this dish contained vast flavour elements and texture, from the sweet, smooth rambutan honey to the crunchy chorizo surrounding the potato, making this dish a delight to eat.

Dessert started off with the Orange, a cold dish that was the brainchild of Chef Alexandre Dionisi, the featured chef from Art at Curate Series 8, who heads the Two-Michelin-Starred La Villa in the Sky in Brussels. A simple yet elegant dish, the Orange was the perfect palate cleanser with its cool mandarin granita, orange segments and saffron infusion, a meticulously prepared dish that was both tangy and readied us for the sweeter dishes to come.

No meal is complete without a sweet dessert, and we loved Chef Halat’s take on popcorn, where he nested a solid, corn shaped puree atop a bed of popcorn dust. The buttery puree reminded us immediately of corn in a cup snacks, and the popcorn dust added an interesting texture to the otherwise smooth dish and reminded us of hours spent eating popcorn at the movies. Served alongside it was a saffron chawanmushi with popcorn, and breaking the shell to mix it with the ‘treasure’ hidden underneath brought a smile to our faces (it helped that they made for a great taste combination as well). Together, these two dishes evoked happy, nostalgic memories of our childhood.

Finally, the meal ended off with what we thought was the most visually stunning and almost oxymoronically delicious desserts of all: the Dark Chocolate Cigar Stuffed with Tobacco-smoked Dark Chocolate Mousse. Realistically resembling actual cigars, these chocolates were served on a bed of Toasted Wild Rice and Icing Sugar charred black, looking exactly like ash in an ashtray. Chef Halat even piped in tobacco smoke using a smoke gun to create the smell of actual charred smoke and ash. This is the perfect dish for anyone who enjoys dark chocolate, and whether you eat the chocolate on its own and taste the smooth, rich chocolate mousse inside, or dip it into the ‘ash’ for that extra crunch, this dish is a great example of Chef Halat’s ability to use sheer creativity to find inspiration in the most unexpected of places, and even turn what initially appears unappetizing into a delectable work of art.

We can safely say that Chef Halat is one of the best, most innovative and bold chefs around for coming up with an unforgettable menu that left our tastebuds tingling and our senses reeling in pleasure from the multi-sensory experience, and maitre’d Iza and Victor for attending to us throughout the fabulous evening. As decadent as it is, we think it’s completely reasonably priced for the decadent experience you’ll be receiving, along with its lush ambience and incomparable service. Without a doubt, dinner at Curate is an event in itself, and Chef Halat’s presence and genius makes it one of the must visit restaurants if you’re thinking of a romantic evening out, or the perfect place to dine at if you’re staying over at Sentosa for a night, and you’d best book your tables early to get a taste of one of the best restaurants at Resorts World Sentosa.

Part of a series where Bakchormeeboy pairs great food with theatre venues to ensure you never go hungry before or after a show.

Curate is located on Level 1 of the Forum at Resorts World Sentosa and is open for dinner from 6.30 – 10.30pm (Tue – Sat), with a special Ladies Night available each Friday. For bookings and menu, visit the RWS website here, or call 6577 7288.

Free valet parking, all-day parking for guests who dine at Curate from 6pm (with every $200 spent). The free valet service is available at the entrance of any hotels in the resort or at the drop-off area in the car park.