Hailed as one of the great musical classics, The Sound of Music has returned to Singapore’s shores to bring back all your favourite songs and more! Last seen here in 2014, Andrew Lloyd Webber’s production of Rodgers and Hammerstein’s unforgettable and arguably, most successful musical features an all new cast with all of the same favourite elements. This is a production that knows exactly what it’s doing, from its cast to its design.

The last time we caught The Sound of Music was in 2014, and a little later on, we actually visited Salzburg in Austria and naturally, went on a Sound of Music tour of the mountains. We now completely understand the charm of the musical’s setting, and in this production, could practically visualize the story unfolding before us in the magnificent Austrian countryside.

Naturally, we appreciated Robert Jones’ dazzling set design, with each scene and environment lovingly rendered in stunningly realistic detail. The Von Trapp mansion feels grand, complete with a working chandelier that casts well-placed shadows, along with verdant green hills Maria sits upon with sunsets so gorgeous you could almost reach out and touch them. In its grand opening, the ensemble of nuns burst out singing in the abbey, kicking off the show with a rousing rendition of “Preludium (Dixit Dominus)”. One felt as if the entire theatre had become a part of the congregation, and we were completely drawn into the play’s world.

Playing the all-important Maria in this production was Carmen Pretorius, a good fit for the ever-optimistic nun. For Pretorius, Maria is a step up from her previous role as Liesl in the same production, and had great enunciation, pushing past technical difficulties such that we could still hear and understand her every word. As caretaker to the Von Trapp children, Pretorius had incredible onstage presence, easily emanating the good chemistry she shared with the younger cast members as she showered them with maternal love. 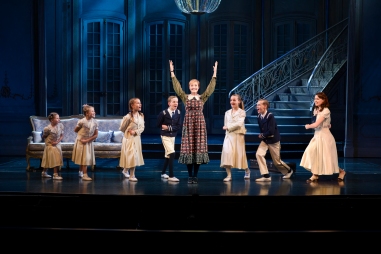 One of the highlights of The Sound of Music is always newly cast Von Trapp children. One imagines it can be quite the struggle to hold auditions in each country the production tours to in order to find the perfect combination of children matching the Von Trapps’ height and maturity, while still possessing strong performance capabilities. In the audience tonight, there were plenty of the local cast members’ families present, and it was evident that the children onstage fed off their fervent energy and cheers as they played their roles. There’s an immense sense of happiness to be gleaned from watching the smiles spread across their faces, knowing that their families were there to support them every step of the way.

Furthermore, The Sound of Music has always been a fantastic and rare opportunity for these kids to work with professional West End cast and crew members. We felt rather proud watching these local talents as they performed “Do-Re-Mi” with Maria, a perfect first number for them to warm up and really get into the groove of the musical. Meanwhile, teenagers Rolf (Michael McMeeking) and Liesl (Zoe Beavon) connected on a deep emotional level onstage, making their rendition of “Sixteen Going on Seventeen” feel sincere and real. As Act 1 ended, there was a palpable lightness in the air as the entire theatre’s spirits were raised by with Janelle Visagie’s uplifting, operatic performance of “Climb Ev’ry Mountain”.

One of the highlights of the night was Nicholas Maude as Captain Von Trapp. An emotional high point for the musical, Maude captured an array of changing emotions as he went from sending Maria away to amazement at his brood of children singing “The Sound of Music”. Maude’s performance feels natural, and resulted in a powerful feel-good moment. Maude later on gets a chance to shine in his solo of “Edelweiss”, showcasing strong vocal control and confident singing. One was also impressed by how committed to realism (within theatrical limits) this production was, and even the ‘talent competition’ the Von Trapps participate in had cast members come in to represent second and third place contestants. 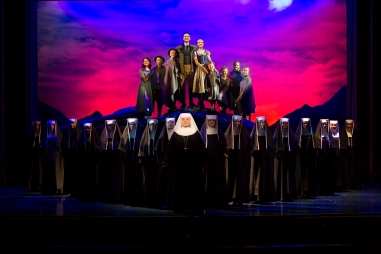 As the ensemble of nuns returned to perform a soaring rendition of “Climb Ev’ry Mountain” to end off the entire musical, we couldn’t help but find a smile emerging across our faces. Walking out of the theatre, there was a new lightness in our step and the hint of the musical’s familiar tunes on the edge of our lips. The Sound of Music proves its point about the sheer power of music to change fate itself – allow yourself to be immersed completely in the lives of Maria and the Von Trapps, and you’ll soon find that there’s no mountain in the world too daunting to be overcome.

0 comments on “Review: The Sound of Music at Mastercard Theatres”