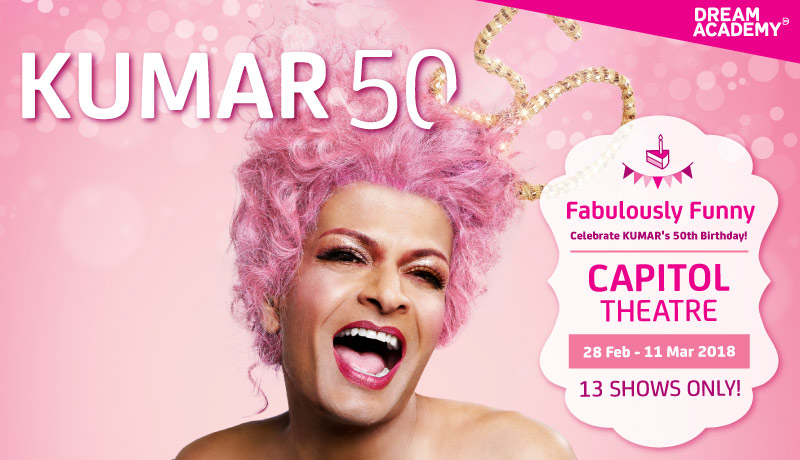 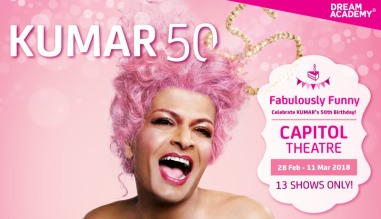 Singapore’s Queen of Comedy shows he’s still no drag at age 50 with a celebration shrouded in joy and laughter.

There is no argument that Kumar is a national icon. Dream Academy artistic director and longtime collaborator and friend Selena Tan has made an absolutely on point decision to stage Kumar 50, giving Singapore’s very own Queen of Comedy a golden jubilee to end all others. Sweeping onto the Capitol Theatre stage dressed in a bubblegum pink wig, a golden ’50’ hair accessory and a gown resembling a multi-tier cake, the diva/drag queen extraordinaire knows exactly how to party it up and celebrate turning 50.

In Kumar 50, the often private comedian does something so rarely seen: he bares it all, stripping away each layer (we’re not kidding, the cake dress is deconstructed to reveal a gorgeous gown only he could pull off) to tell all about his childhood growing up in sunny Singapore, to his hopes, his dreams and even his relationships (and life in NS!). Beyond being a laugh out loud show, Kumar 50 is a moving tribute to his life, recalling his humble beginnings at the Boom Boom Room to his career at Venom Bar. It’s stories like these that resonate with audience members who’ve been following Kumar all their lives, nostalgic for the past alongside him. In one instance, Kumar even compares his life to that of Guanyin – born as a man but becoming a woman (and beyond), a clever comparison that goes over well with the theatre. Audience members even get a chance to ask Kumar anything during the intermission (via email), which he’ll more than gladly answer in the second act.

But of course, beyond the feels, Kumar hasn’t gotten this far without a keen sense of wit and a willingness to tackle literally any and every topic under the sun, showcasing a wide repertoire of material, with assistance from contributing writers Mr Miyagi, Sharul Channa and Joyce Arriola. Armed with great comic timing, he nails each punchline to rapturous laughter. As a queer icon, Kumar also took the opportunity to campaign for acceptance, joined by a posse of fabulous drag queens (showgirls Nina, Helda, Lisa and Sherry) lip syncing to some of the greatest songs you could practically stand up and dance to, including Keala Settle’s ‘This Is Me’ from The Greatest Showman. Frederick Lee must be commended here for his collection of stunning costumes, each more fabulous than the last and perfectly matching the theme and mood of each segment.

Kumar may be raunchy, but he’s also incredibly real. The Capitol Theatre seems the only apt stage to commemorate Kumar’s life and countless grand, golden years in show business, a perfect match of icons, grandeur and class. Dream Academy has made it clear that they’re back in full force this 2018 with a monster hit of a show, and with a full house testament to his staying power, here’s hoping that 50 marks the start of a brand new chapter in Kumar’s life, more colourful and exhilarating than ever before, and 50 more years of laughter and joy galore.

Kumar 50 plays at the Capitol Theatre from 28th February to 11th March 2018. Tickets available from SISTIC