Singapore Repertory Theatre’s Shakespeare in the Park makes a triumphant return after a year’s absence.

In a world filled with crazed presidents and a turbulent political climate, Julius Caesar, Shakespeare’s tale of brutal governors and despotic leaders, takes on more significance than ever. In SRT’s modern take on the play, the script has remained largely loyal to the Bard’s original writing, but director Guy Unsworth has dressed the play in a modern skin, changing the setting of Rome to multi-country organisation R.O.M.E., at the top of which sits a female Julius Caesar, hounded by a relentless team of journalists fighting to get the juiciest quote. 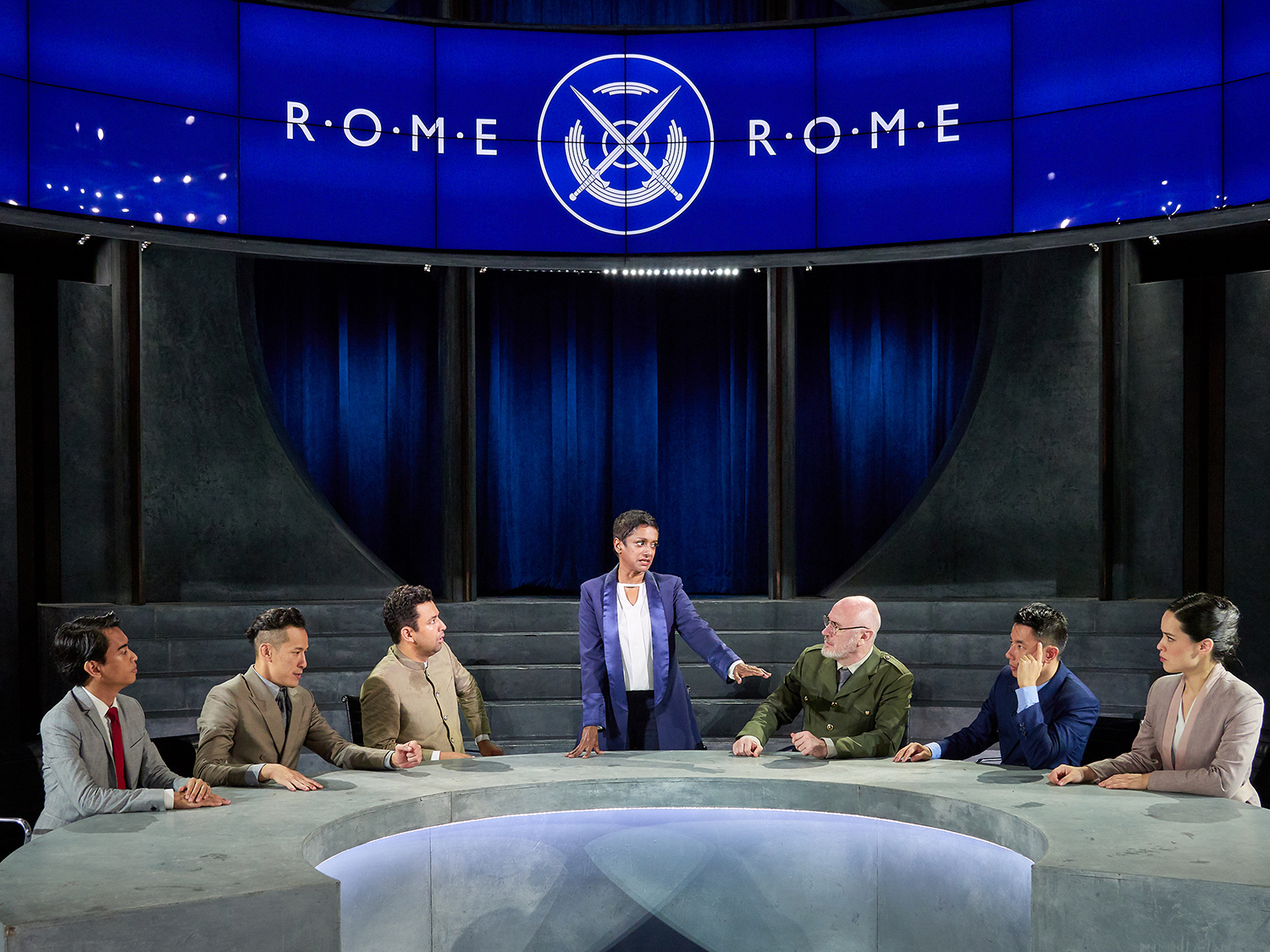 Upon first entering Fort Canning Park, it’s impossible to miss the majestic, towering set designed by Richard Kent, reminiscent of an actual parliamentary chamber. One can practically imagine that we’re inside the building itself, about to witness a parliamentary debate as we observe the various leaders dressed in well-pressed suits, all smiles and receiving accolades and prizes. Beyond its role as a political chamber, the multifaceted set also holds plenty of surprises, completely transforming into an outdoor garden setting in the blink of an eye later on, and allowing for quick and precise set changes. Considering how little space there must be backstage, the amount of effort it takes stage manager Sunitha Nayar and her team to keep everything in check must be phenomenal.

Perhaps the most prominent feature of the set is a flawless giant LED screen that hangs overhead displaying multimedia designed by Koo Chia Meng. At times, it’s a brilliant set element that acts to highlight the increasing importance of political popularity, evidenced by the constantly changing social media numbers displayed onscreen, and at others, it emits an ominous scarlet glow as the R.O.M.E. logo is drenched in red, determining the mood of each scene. 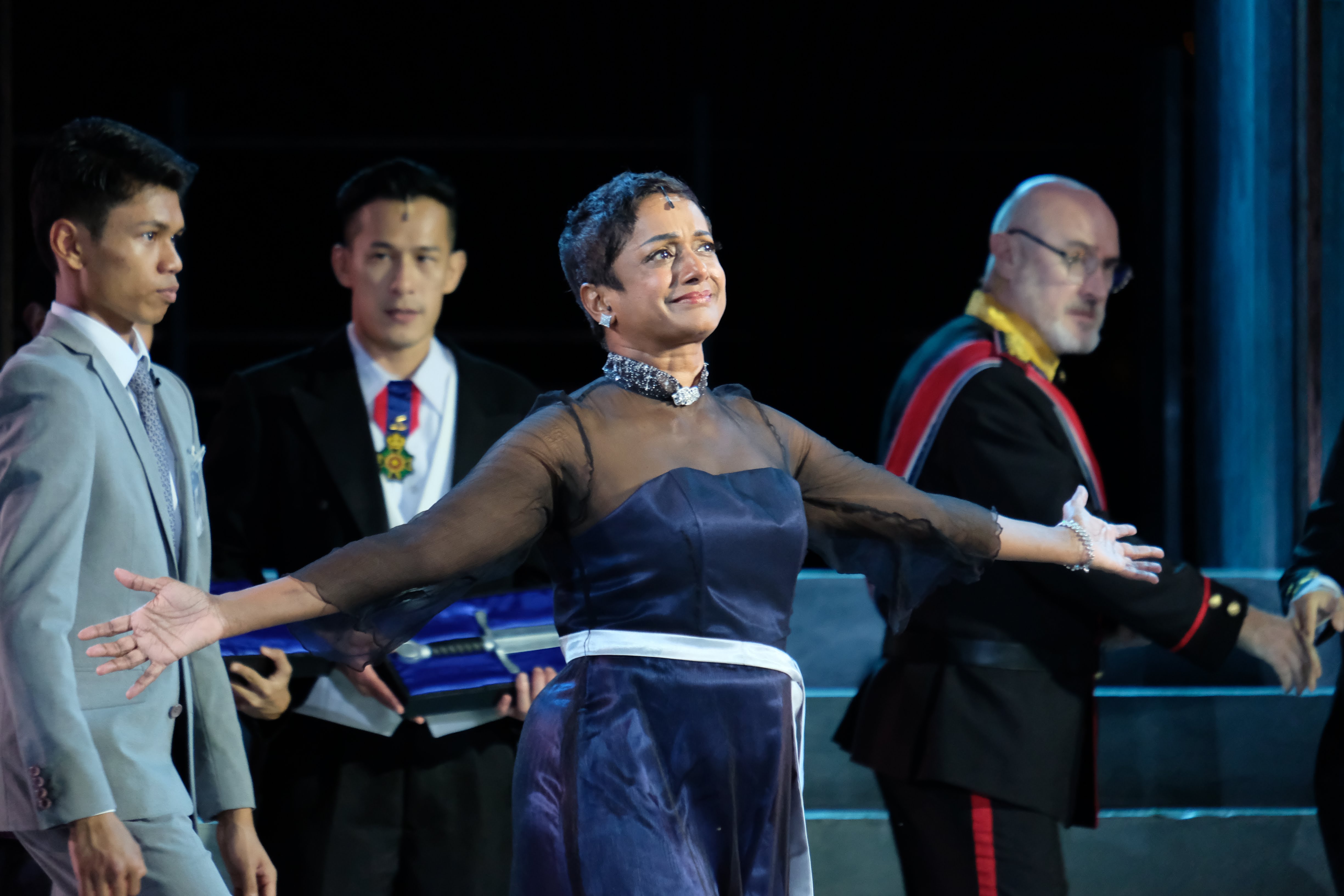 With a cacophony of nosy reporters closing in on the leaders led by Vanessa Ann Vanderstraaten, who fully embodies and commits to her role as Popilius Lena, this version of Julius Caesar highlights the idea of the media circus and political leader as celebrity more than ever. As the stately Jo Kukathas enters (as Caesar) with the rest of the leaders holding hands and standing in a single line, there is a distinct sense of fakery and diplomatic masks they emit, and one imagines the daggers and plots lying beneath each diplomatic smile, and at one point, literal rainwater pours down onto the set, a visual representation of the political storm about to hit the building and its inhabitants. 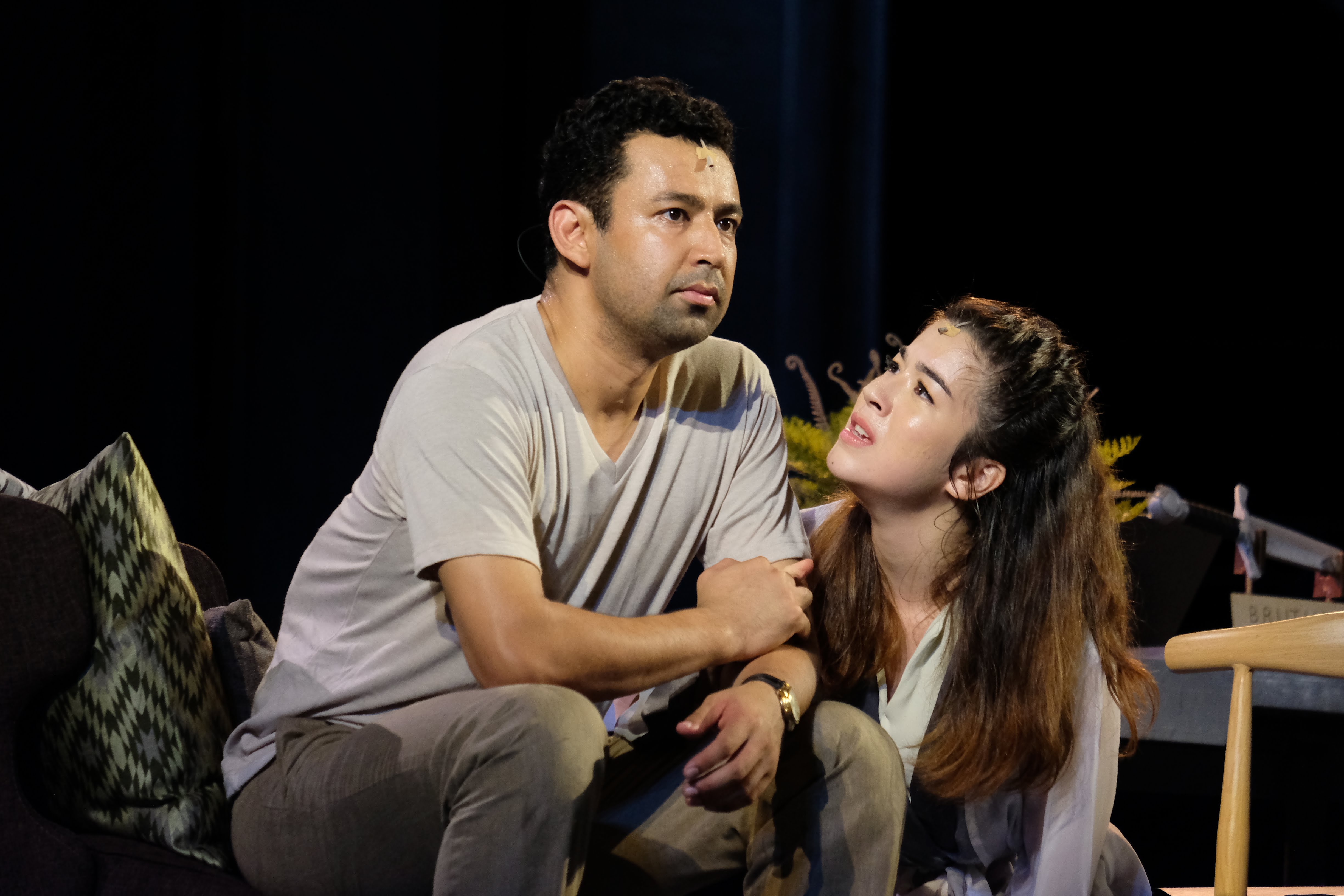 For all its classy design elements and focus on appearances, Julius Caesar comes armed with a capable cast of some of Singapore’s finest actors, with both the main characters and ensemble able to handle Shakespeare’s language with aplomb. Jo Kukathas commands attention with her portrayal of Caesar himself, and proves that power-hungry women in power can be just as authoritative, and a worthy rival to past portrayals of male Julius Caesars. Thomas Pang as gifted orator Mark Antony leaves a memorable impression on audiences despite his brief appearances, convincing as he makes full use of his natural charm to win over the audience, while the conspiratorial fraternity shared between Ghafir Akbar and Julie Wee as Brutus and Cassius is taken to new heights with the strong onstage chemistry and tension both actors shared. 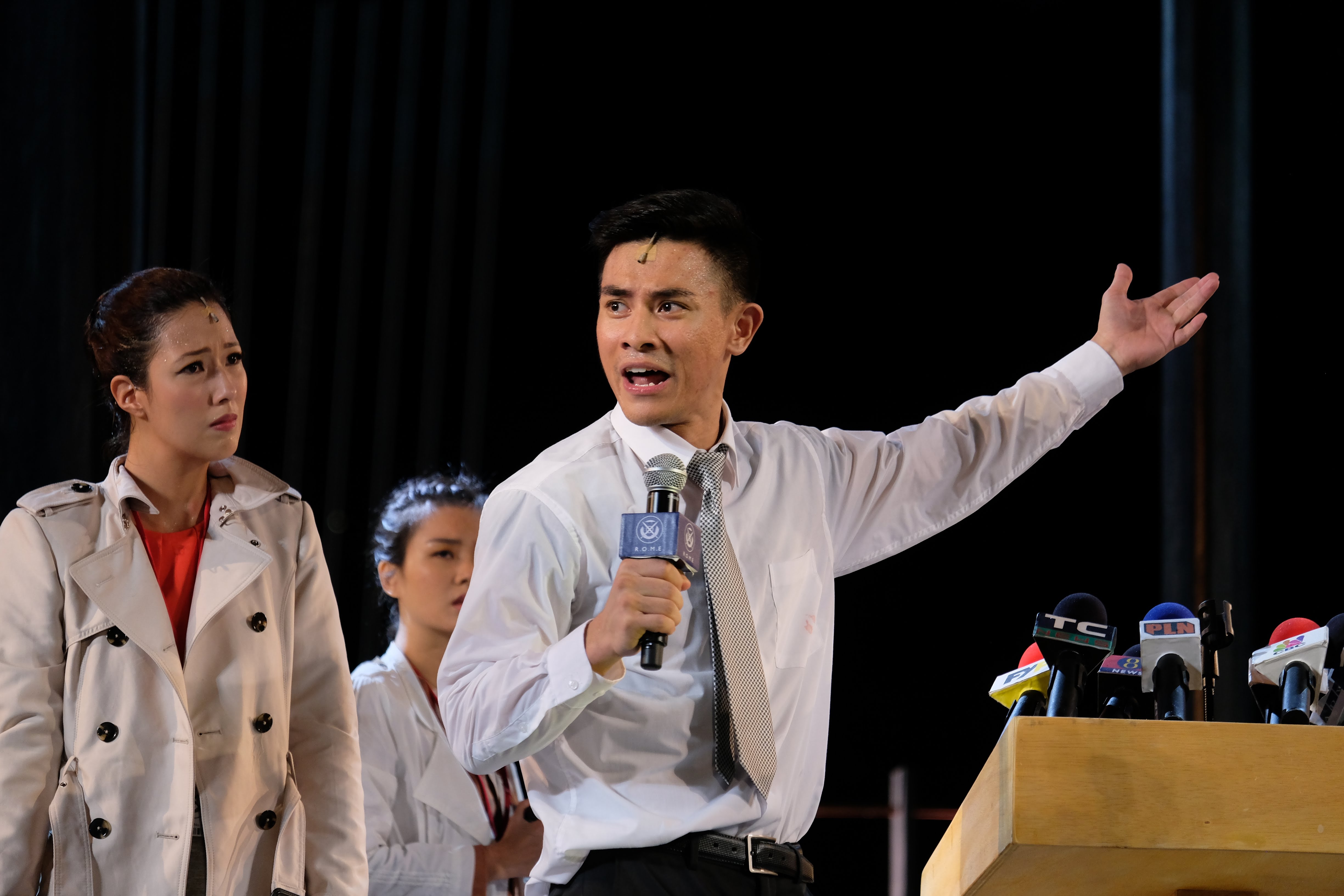 The move to genderbend Cassius’ character is an inspired one too – although not overtly stated, it’s a directorial decision that makes us consider how Cassius’ thirst for power and plot to kill Caesar might now partially informed by the real world media’s focus on pitting females in power against each other. SRT should also be commended on their decision to cast so many young actors in this production, and though their roles were ‘minor’, each of them were key to making the entire show flow and to supporting the main cast. Each of them performed well under the guidance of Guy Unsworth, and showed plenty of potential for greater roles to come. 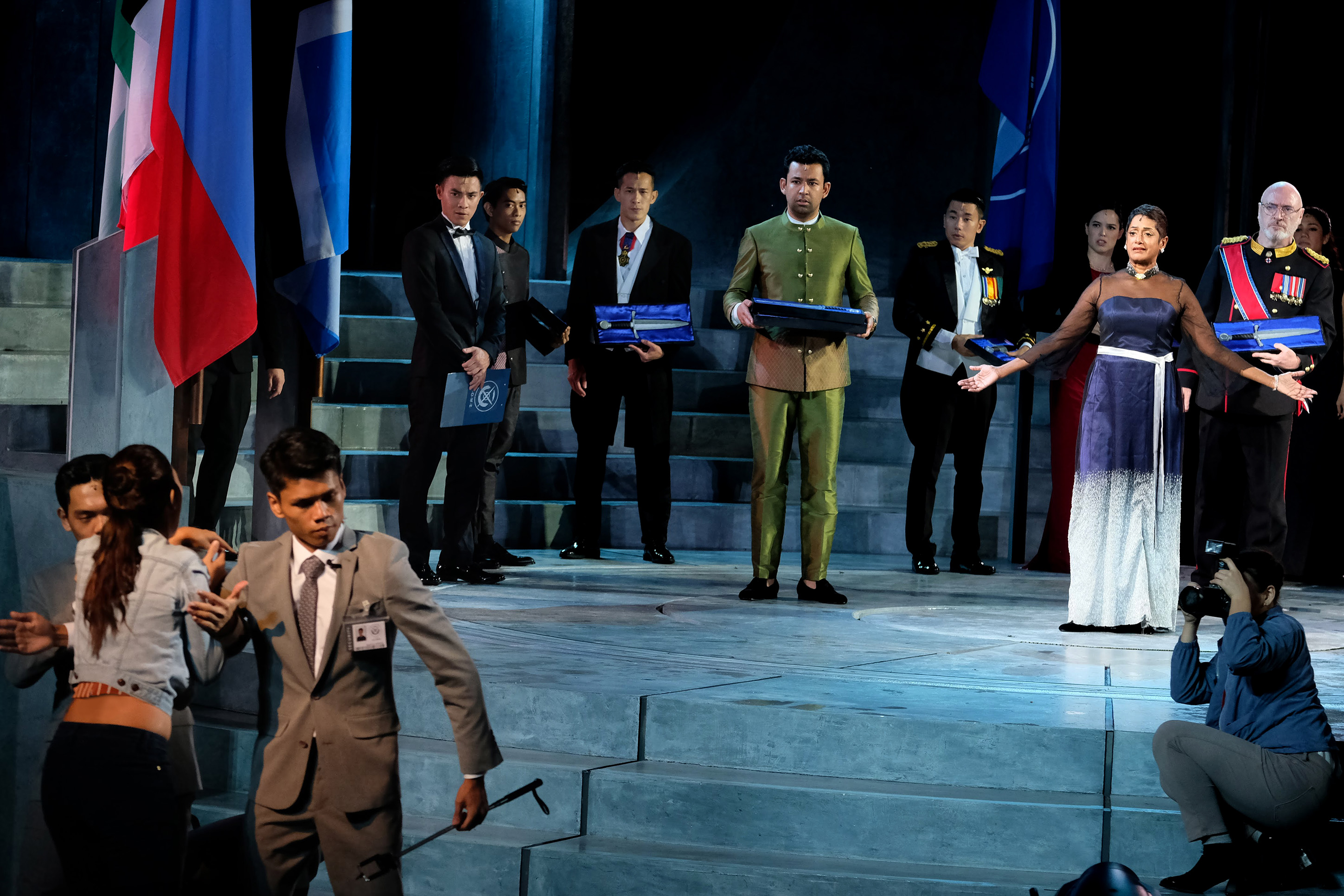 Plenty of care has been taken to ensure that the audience feels fully immersed in the Julius Caesar experience, such as the minor but clever choice to frame the second half as a ‘press conference’, and during the intermission, the screen would count down the time till the presscon begins. Volunteers are also handpicked from the audience to go up and be a part of the show during the presscon, allowing them to soak up the atmosphere and take in the magnificent set up close, further captivating us all and drawing us into the world of R.O.M.E. Jude Obermüller’s original score and soundtrack composed for this production were well done, and added to the tense atmosphere of the setting. 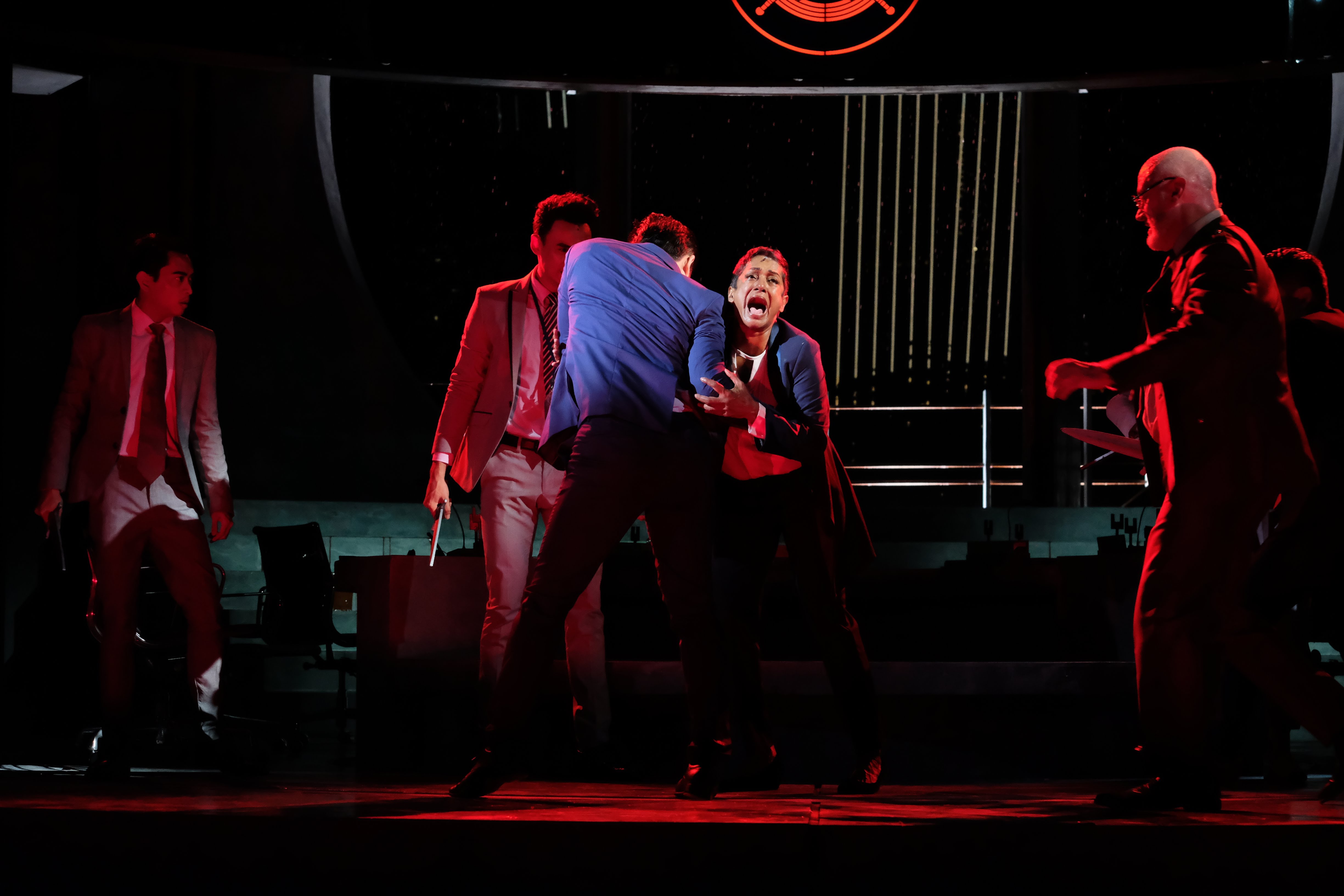 By the time the play reaches its denouement, the audience is on edge with the powerful combination of gripping story mixed with brilliant design elements. The return of Caesar as a haunting, spectral ghost is genuinely horrifying (helped by Gabriel Chan’s lighting design and Obermüller’s music) when she makes her appearance to taunt Brutus, whose shock is clearly broadcast to us from Ghafir Akbar’s expressions. It doesn’t matter that we already know how it all ends in tragedy – one is so captivated by the entire production that there’s an element of surprise we feel watching Brutus and Cassius fall to their deaths, their every regret evident from their dying looks.

SRT’s Julius Caesar is a meticulously crafted play that heralds the triumphant return of Shakespeare in the Park, and in its bold ambition, fully captures the essence of the original script while reinventing it as a fresh, spellbinding play for a contemporary audience. This is a modern political thriller that’s as timely now as it was then, leaving one gasping at its twists and reeling from the action, and without a doubt, one of the finest editions of Shakespeare in the Park to date. Despite the hot and humid weather, everyone left with smiles on their faces, and SRT Managing Director Charlotte Nors even commented: “A little boy came up to me after the show, and told me he thoroughly enjoyed it.” That’s all the testament one needs to convert the sweltering heat to a warmth in our hearts, and to understand what Shakespeare in the Park is all about: creating accessible, enjoyable outdoor theatre, and having an amazing night out at the park with family and friends, regardless of age.

Shakespeare in the Park – Julius Caesar plays at Fort Canning Park from 2nd – 27th May 2018. Tickets available from SISTIC.

2 comments on “Review: Shakespeare In The Park – Julius Caesar by Singapore Repertory Theatre”