The Russians know best how to present a timeless classic.

There are few ballets that have as much staying power, infinite mystery and enchantment as Tchaikovsky’s Swan Lake, and it stands to reason that there must have been something magical in its original staging that’s captured the hearts of so many fans ever since it first opened in Russia in 1877. So it is that the St Petersburg Ballet Theatre has dedicated themselves to presenting the original in all its glory, as they returned for a third time to Singapore this May.

The St Petersburg Ballet Theatre’s version of Swan Lake remains loyal to the original choreography and staging. All it requires is a simple but effective set to clearly demarcate and differentiate scenes, and traditional costumes to signify each character, while giving its dancers the spotlight to show off their skill, finesse, and mastery over the difficult footwork required of Swan Lake. 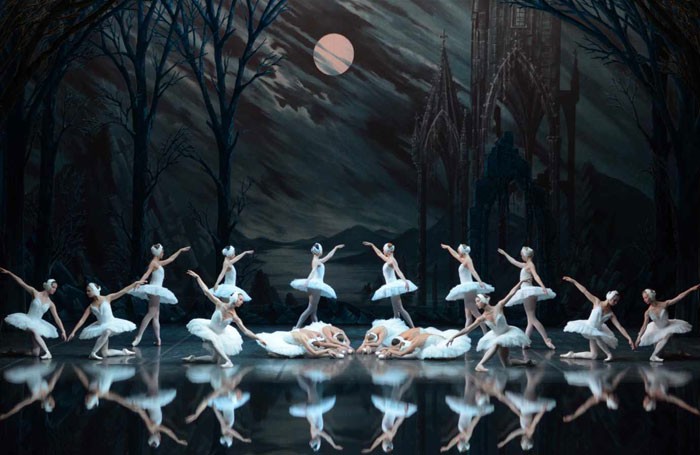 The St Petersburg Ballet Theatre makes it clear from the start that they want to fully immerse audiences in the mystical world of Swan Lake, taking the time to establish the mood and ambience of the piece in the first act. But it is Act 2 of any Swan Lake that begins to truly define its quality with the introduction of von Rothbart (Aleksey Lisitsin) showcasing his control over the domain. The pace was stepped up and all eyes were riveted on the stage as the plot began to unfold. As the court Jester, dressed in iconic harlequin costume, Seiyu Ogasawara’s role becomes integral in his portrayal, emanating a strong presence as he articulated simple but powerful nuances in the few scenes he appears in. 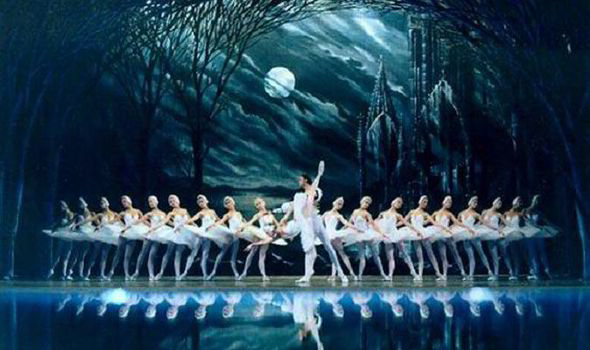 One of the main highlight of any Swan Lake is to witness the teamwork, finesse and synchronised movements of the corps de ballet – with 20 members, the creative team did a good job of choreographing them onstage and ensuring balance and elegance in each scene. One particular scene sees swan princess Odette in the middle, while 10 members flank either side of her, and as they awakend, left a powerful visual impact onstage. Four little swans Svetlana Zezyulina, Elizaveta Pishchik, Daria Tsygantsova and Tama Fokina also showcased a lot of confidence in a precarious sequence where all four of them were connected and supported only at the hands while they performed complicated, precision footwork – this is testament to the countless rehearsals and hours that no doubt went into training these ballerinas. 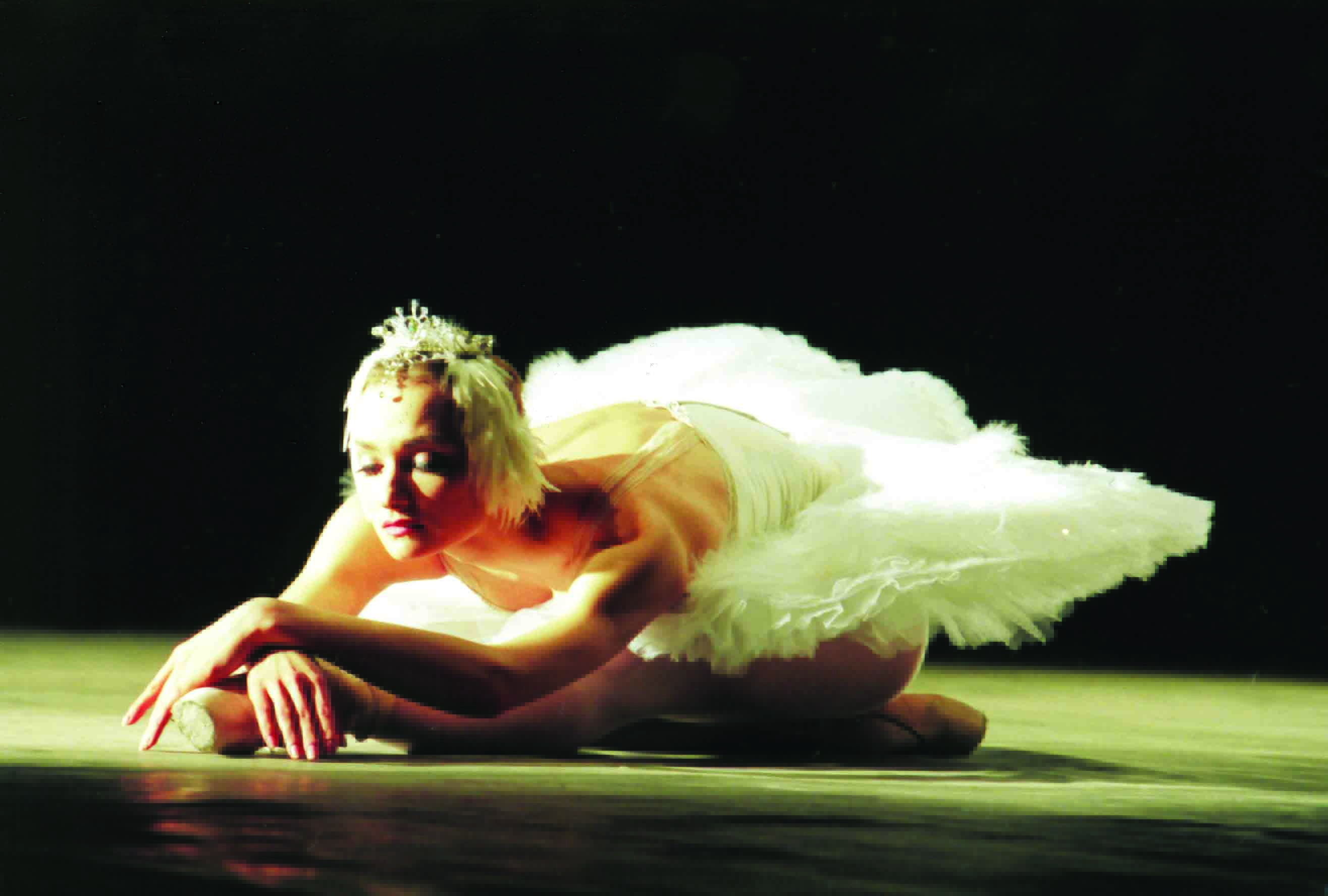 Although we did not get to see Prima Ballerina Irina Kolesnikova in action, Diana Kosyreva of the Bolshoi Ballet was a strong performer performer in her own right in taking on the lead role of Odette, showcasing a wealth of poise and good form in her portrayal and her precise style, each movement capturing the grace and beauty of her character. Over the length of the performance, Kosyreva develops Odette into a well-defined character, and her signature 32 fouettés is landed with a grace and lightness that well represents the full extent of her skillset and professionalism. In addition, when performing as black swan Odile, she showcases a polar contrast with forceful movements that felt like hostile attacks as opposed to Odette’s care and tenderness. As Odile, her movements are fiercer, almost as if possessed by an otherworldly spirit as she pushes Prince Siegfried away. It is not an easy task to perform both white swan and black swan personas, but Kosyreva’s performance showcased complete mastery. 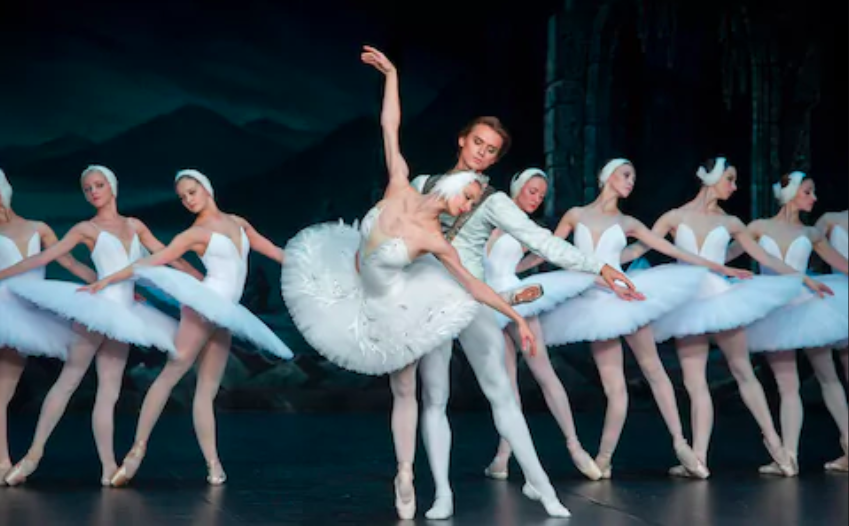 Kosyreva shares a strong onstage chemistry with Dimitry Akulinin as Prince Siegfried, vital to believing and investing in their grand romance, and the many solos they each performed between them was no doubt the highlight of the entire performance as they executed each sequence with class. It’s a pity then that the production could have been elevated further still should they have had the means to bring in a live orchestra.

Ultimately, director Konstantin Tachkin’s decision to keep his version authentic and true to the original is a wise one that showcases and preserves the longevity of such a classic. In choosing to end with the triumphant finale of good over evil with a twist, as opposed to modern versions where both Odette and Siegfried ascend to the heavens, it’s an interpretation that makes it special and remembered. With the high calibre performance presented by St Petersburg Ballet Theatre, this is a Swan Lake assured to leave centuries of audiences in awe at the sheer beauty of this classic work.

Swan Lake plays at the MES Theatre from 8th – 13th May 2018. Tickets available from SISTIC