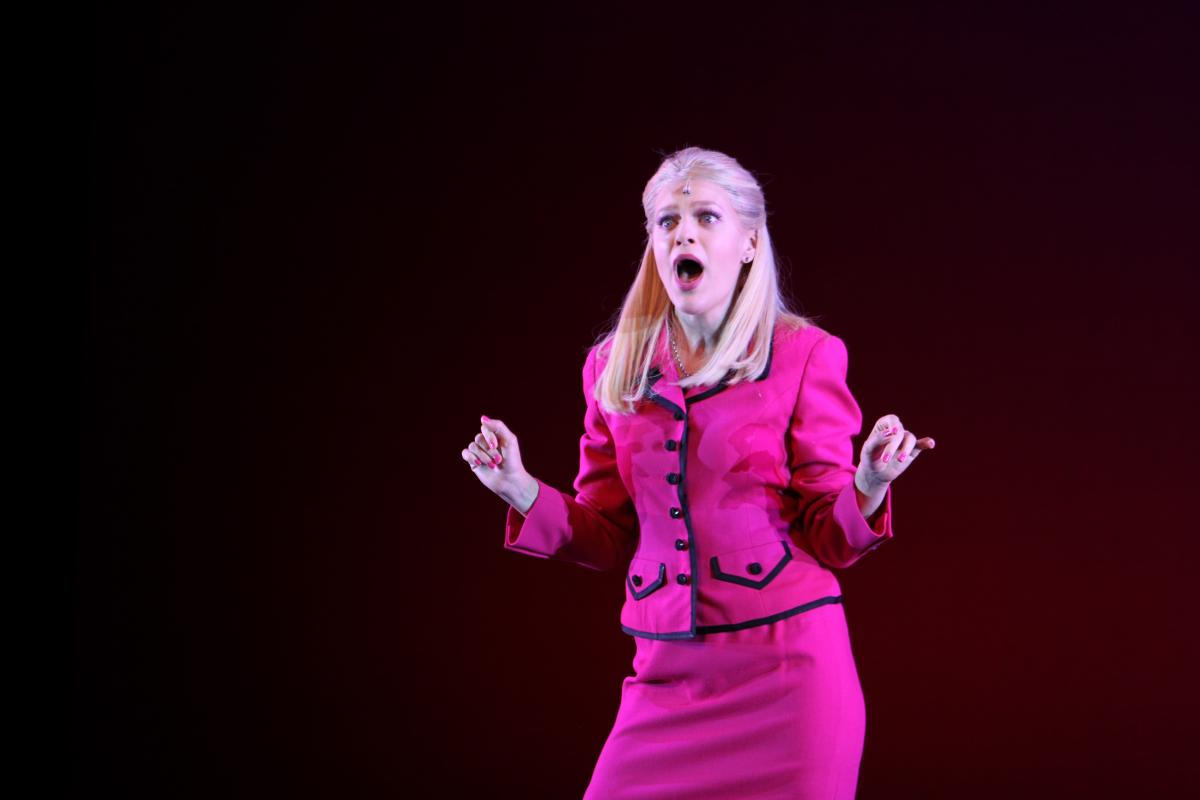 For all its giddy pinkness and improbable plot, there’s something special at the heart of Legally Blonde that makes it such a fantastic watch from start to finish. First opening on Broadway over 10 years ago, there’s a surprising relevance to this show about a sorority president turned lawyer that elevates it far beyond its chick flick roots into a soaring modern fable of being true to one’s self and female empowerment, echoing more than ever before in an era of #MeToo and #HeForShe. 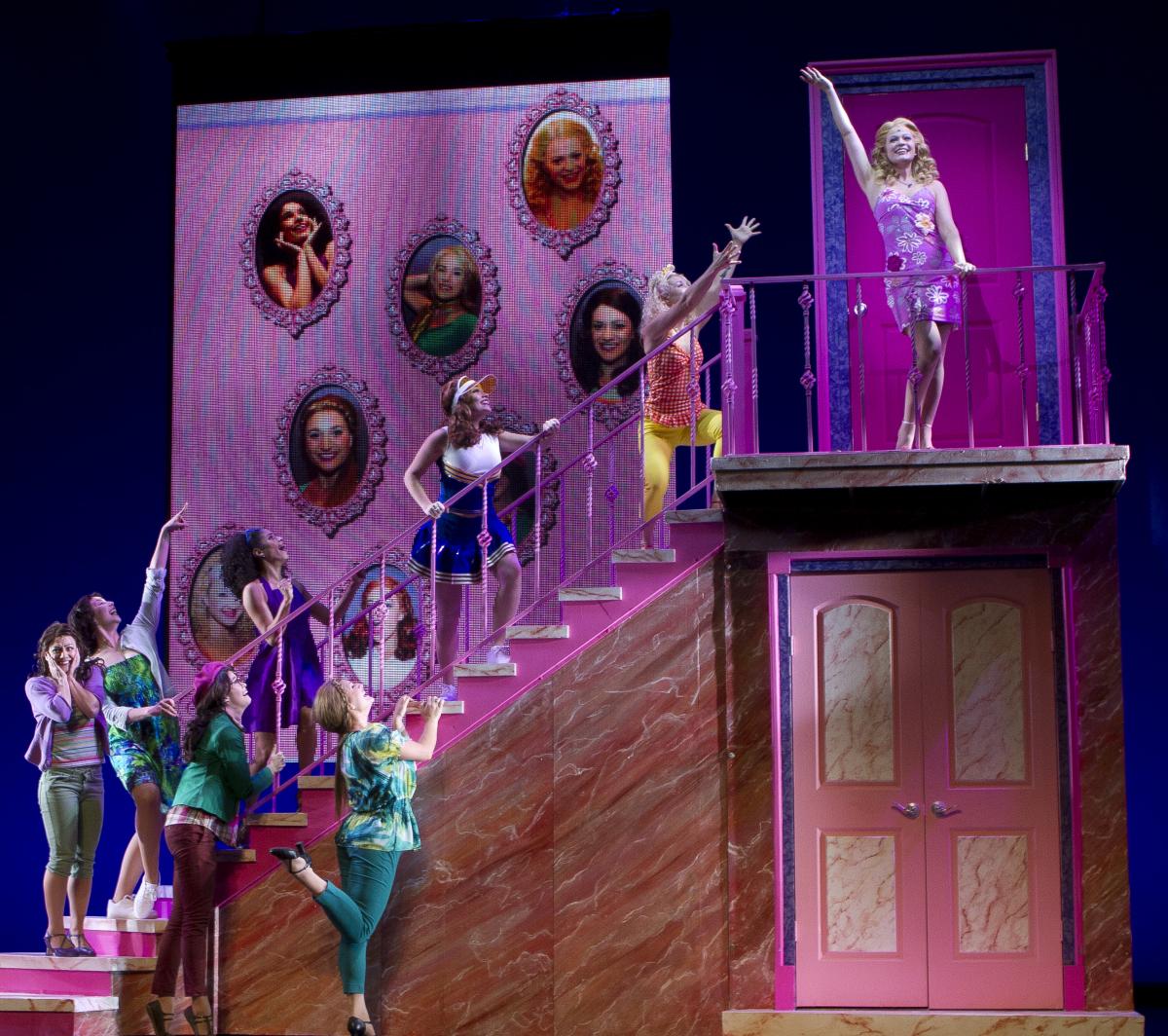 In brief, Legally Blonde follows fabulous, pink-loving sorority president Elle Woods as she finds herself suddenly dumped by her boyfriend Warner as he leaves for Harvard Law School, finding her not ‘serious’ enough. In chasing him, she works hard, finds her way into Harvard Law School herself, and with the help of a hairdresser, a teaching assistant and a Greek Chorus of sorority sisters, she finds that her true calling goes far beyond Warren, and is bigger than she could even begin to imagine.

Much of the musical’s success can be attributed to Laurence O’Keefe and Neal Benjamin’s impossibly catchy score and witty lyrics, capturing the spirit of sorority and university life while remaining unabashedly pop, created for the MTV generation of the time with its cast members yelling ‘Omigod you guys’ and featuring plenty of big, over the top moments – the incomparable ‘Greek chorus’ of sorority sisters is particularly endearing, whether they’re suggesting starting a catfight with a romantic rival or teaching the intricacies of a surefire flirting move in ‘Bend and Snap’. Coupled with Heather Hach’s book, the world of Legally Blonde becomes a madcap, high energy bullet train of boundless energy that is equal times laugh out loud and visually arresting, each number stunningly well choreographed by Bob Richard and performed snappily and precisely by the well-rehearsed cast. 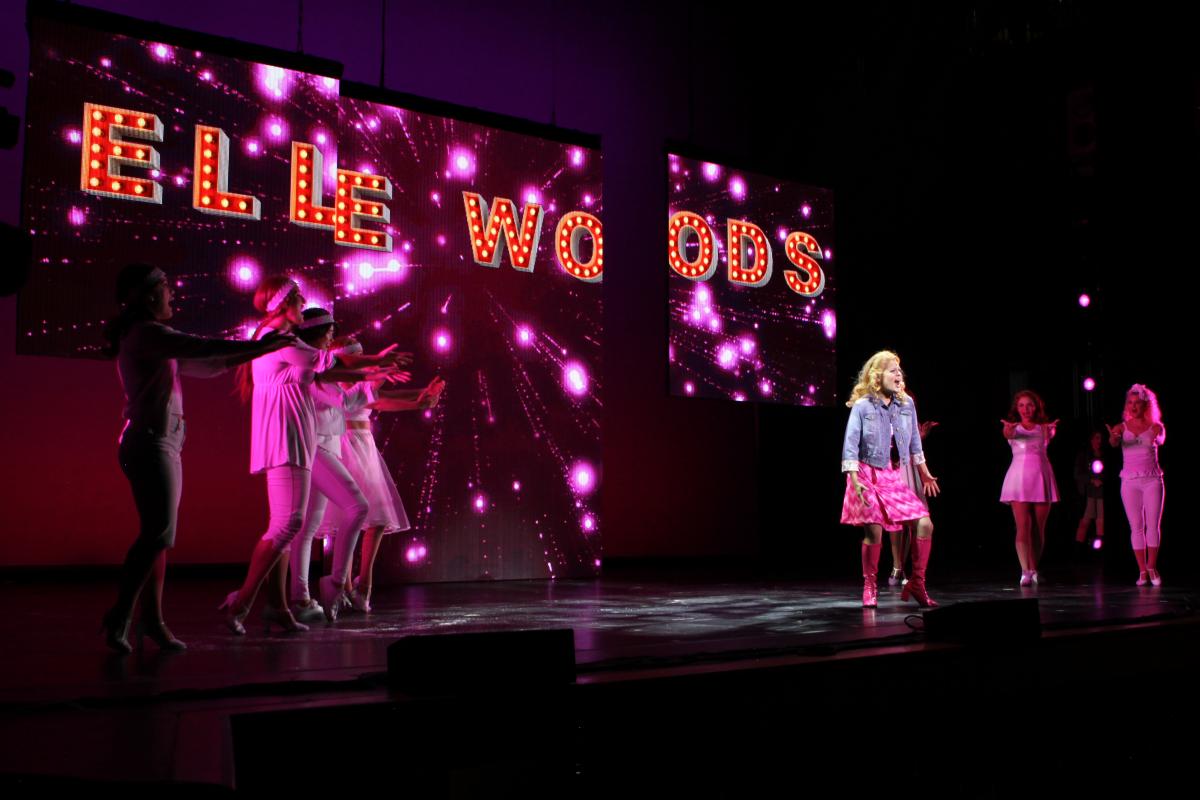 But beyond its cotton candy veneer and larger than life world, Legally Blonde is a show that’s also full of heart, with its characters lined with an edge of truth that makes them incredibly relatable. Leading the cast as Elle Woods is Maris McCulley, clear-voiced and bringing her own unique spunk and unerring strength to the character. McCulley is the kind of person who commands attention the moment she steps onstage, a born leader as she beats to the sound of her own drum, endlessly optimistic and a pillar of perseverance. 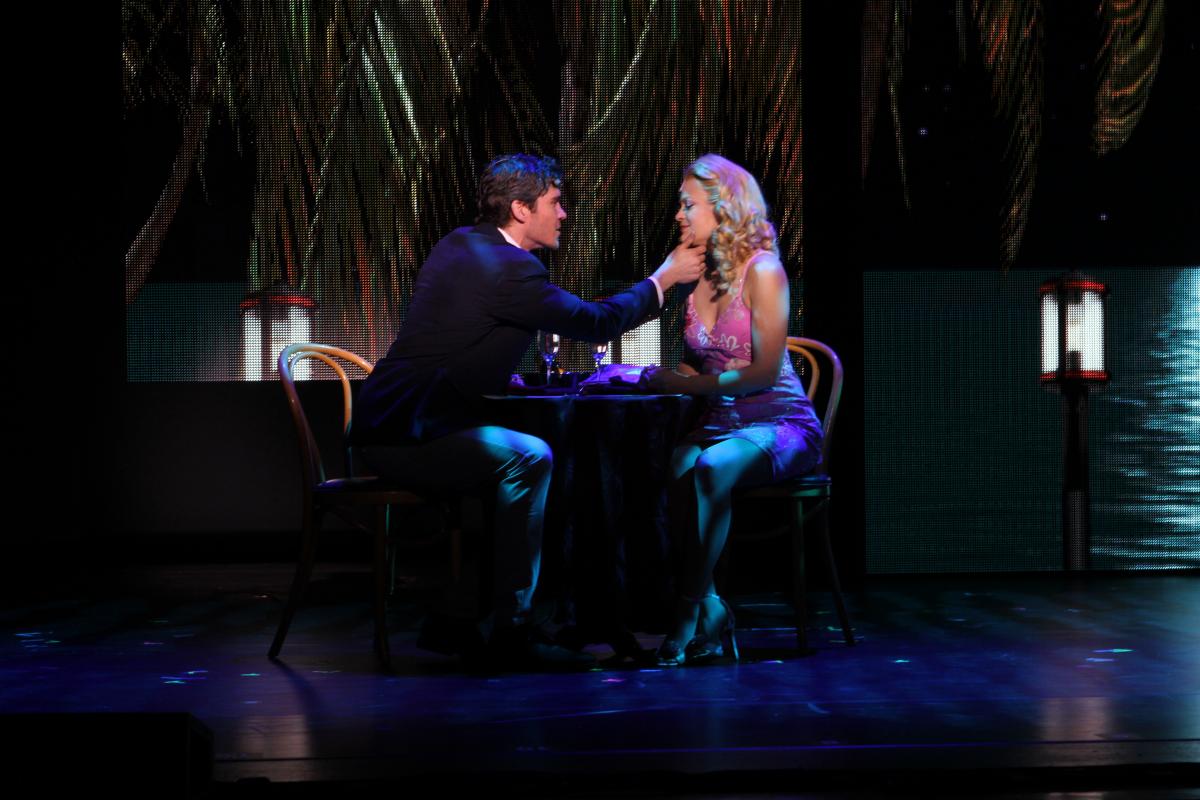 Being onstage for almost the entire musical isn’t an easy feat, and McCulley does this with aplomb, maintaining that limitless, Red Bull-powered energy throughout. McCulley simultaneously captures the blonde stereotype while completely subverting it with her natural charm and full commitment to the character. McCulley excels in high energy numbers such as ‘So Much Better’, bringing an earnest, can-do spirit to her character that forged a connection with the audience, making us immediately want to root for this unlikely, underdog heroine every step of the way. Meanwhile, McCulley also showcases genuine emotion in ballads such as ‘Legally Blonde’, and her performance alone is one of the biggest reasons this production of Legally Blonde is as good as it is.

Always true to herself and going her own way, Elle Woods becomes a modern poster girl for female empowerment and Legally Blonde celebrates both that and the importance of having support from both male and female counterparts. Naturally then, McCulley herself is supported by an equally talented supporting cast – besides the aforementioned Greek Chorus, love interests Warner and Emmett are played by Mark LaDuke and Jayson Speters respectively, each one possessing strong, confident voices that provide a strong contrast between arrogant Warner and ‘Chip on My Shoulder’ Emmett. Speters especially is given plenty of opportunity to balance both the serious and spontaneous aspects of his character, making for a loveable man we can truly get behind. 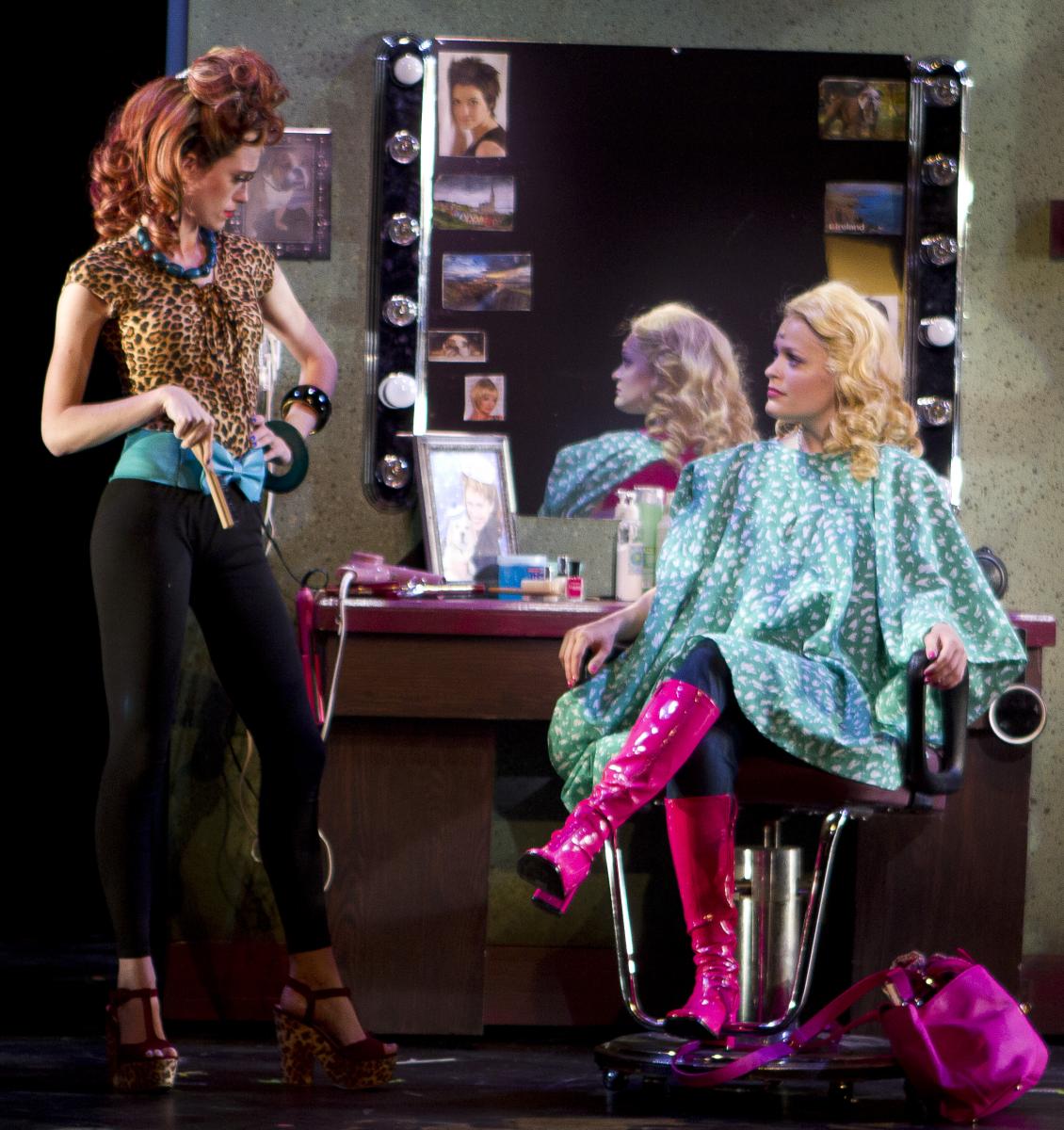 As for hairdresser turned sassy confidante Paulette, Mychal Phillips is a riot every step of the way, from her unexplained obsession with ‘Ireland’ to her flustered state when flirting incorrigibly with the UPS guy, a joy to witness each time she steps onstage. Finally, as ‘serious’ romantic rival Vivienne, Anna Landy initially poses as a formidable foe to Elle, tripping her up at every opportunity. When she finally comes around to rooting for Elle, we hear her vocal range and strength come through in ‘Legally Blonde Remix’, and it’s testament to Landy’s acting prowess for us to do a 180 degree turn and applaud at her show of genuine sisterhood. 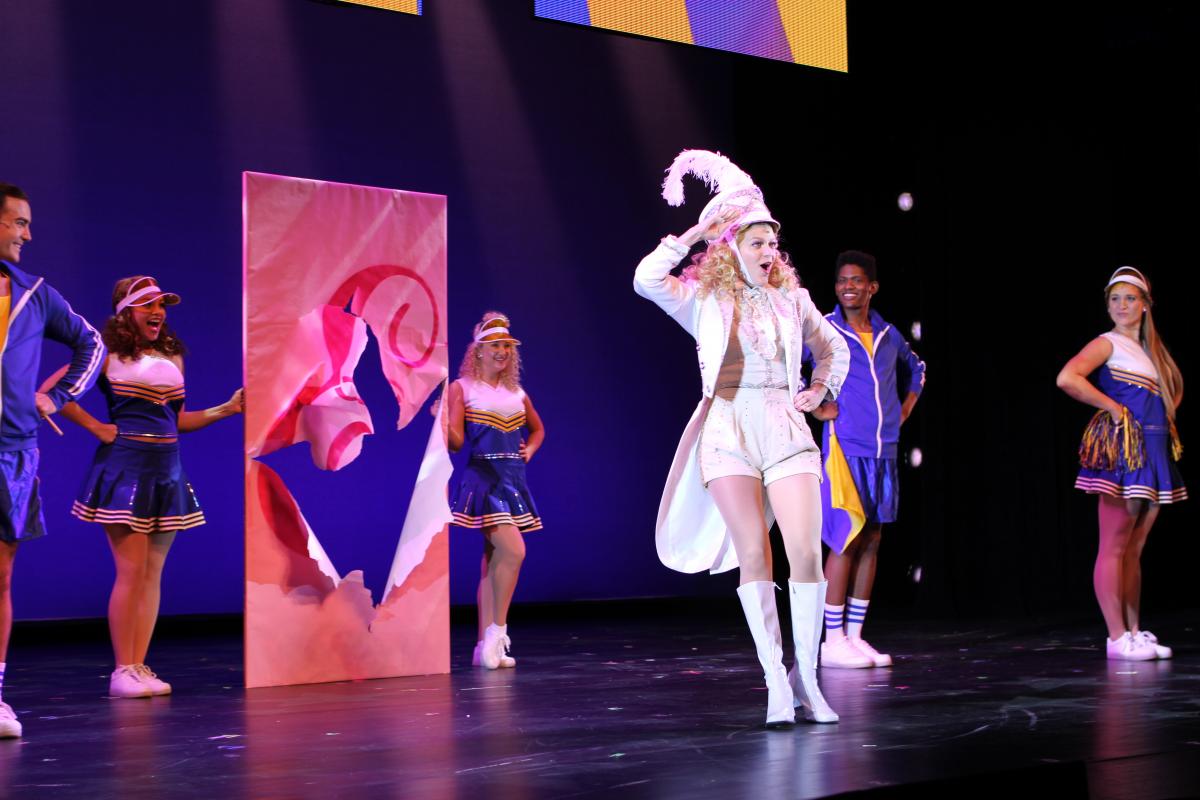 For a touring cast, despite the small size of the band, the sound quality feels full and much larger than its 8-man strength would suggest, effectively catching each and every one of the fast paced and surprisingly complicated songs featured on the score. From standard keyboard and guitar pieces to even playing the Irish bag-pipes, there’s a lot of versatility on show with this very capable band. Having listened to the soundtrack in its entirety multiple times in our younger years, it felt like a dream come true to be able to hear it finally performed and sung live in all its enthusiasm. In addition, the Sands Theatre’s sound system has seen a vast improvement from some past productions, coming through crisp and clear for the entirety of Act 1. 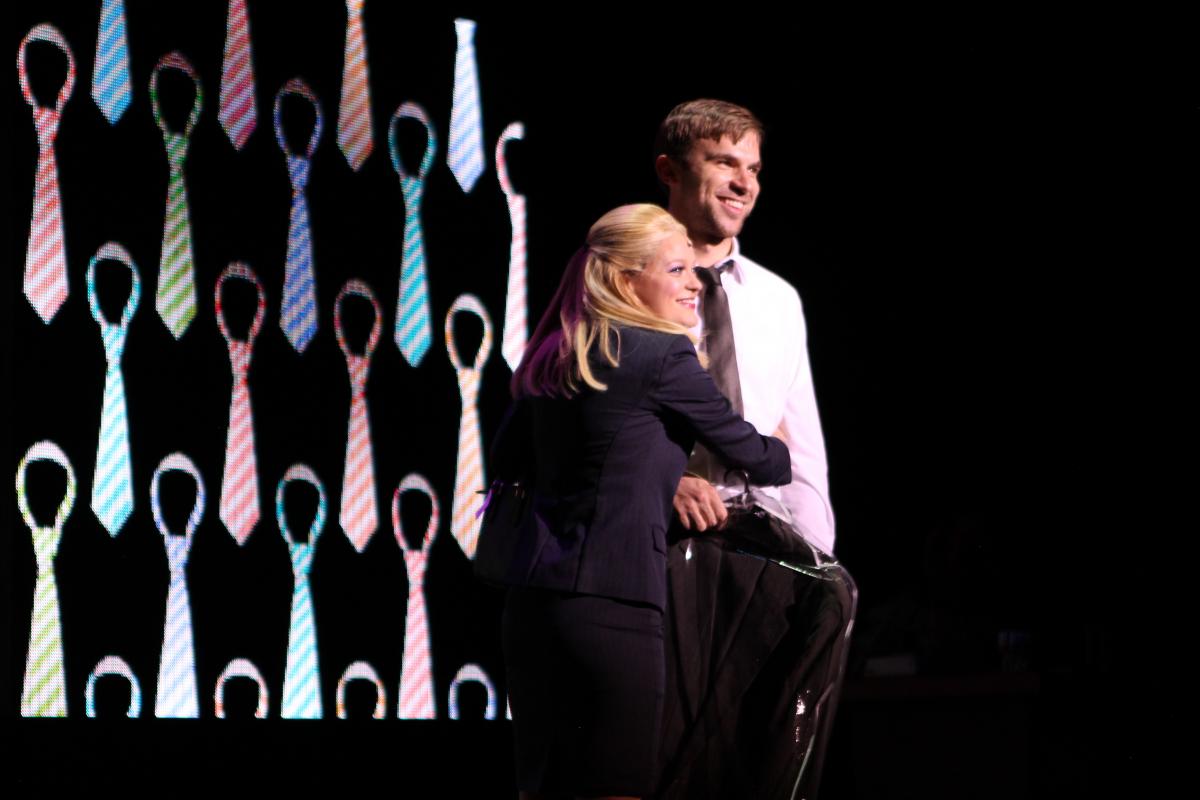 There’s no effort spared by the team to work in plenty of detail into Legally Blonde, from seeing through the entire act of paying at the department store, including producing a credit card to signing on a credit card machine, to the fact that even the clothes in the department stores have price tags attached to them. Randel Wright’s clever scenic design allows set pieces to have multiple uses, such as a court room doubling up as a bathroom with a single swivel, while Jonathan Infante’s video design is an especially smart new touch to the musical – the videos depicted on each LED screen are surprisingly realistic, and help create the illusion of depth in each scene while hiding a couple of fun elements during certain numbers, such as transforming an ordinary Harvard classroom into a much more sinister environment during ‘Blood in the Water’ with a simple transition and palette swap.

You can’t help but feel the pure, unbridled joy of this musical phenomenon as it strides confidently into your heart with all the subtlety of a sledgehammer. But that’s not a bad thing at all – this is a team that knows how to appeal and bring out the right mix of no holds barred fun and honest sincerity from Legally Blonde to keep a smile on every audience member’s face during the entirety of its run. Overflowing with positivity, a simple yet pertinent message of empowerment, and a cast that revels in it all, Legally Blonde is the musical anyone and everyone needs this season that assures you of coming out of the theatre feeling so much better than before.

Legally Blonde plays at Sands Theatres at Marina Bay Sands from 10th – 20th May 2018. Tickets available from SISTIC, but just for our readers, there’s a special 50% off if you visit the MBS website here!

3 comments on “Review: Legally Blonde The Musical presented by BASE Entertainment Asia”