A visually spectacular journey into the world of Pandora.

Director James Cameron’s sci-fi film Avatar was a hit when it first premiered in 2009, with a completely new world built around his vision, from an extraterrestrial environment all the way to an entire new language for these iconic, giant blue humanoids. The dedication to creation was as evident then as it is now in Cirque du Soleil’s spin-off arena spectacular based off Avatar, which had Cameron himself involved in the creative process, and Toruk features all new characters and a new story, while cleverly incorporating Cirque’s signature technical mastery and acrobatic feats.

Set 3,000 years before the film on the Avatar planet of Pandora, Toruk is a look into the first Na’vi who dared ride the fearsome, dragon-like Toruk as it flew over the skies as the survival of the sacred Tree of Souls hangs in the balance. Taking on the form of a giant, winged puppet, the Toruk goes from becoming a source of primal fear to one of affectionate reverence, as it transforms into a symbol of hope and unity for Pandora’s five tribes, leading to Toruk’s stunning, moving end scene. 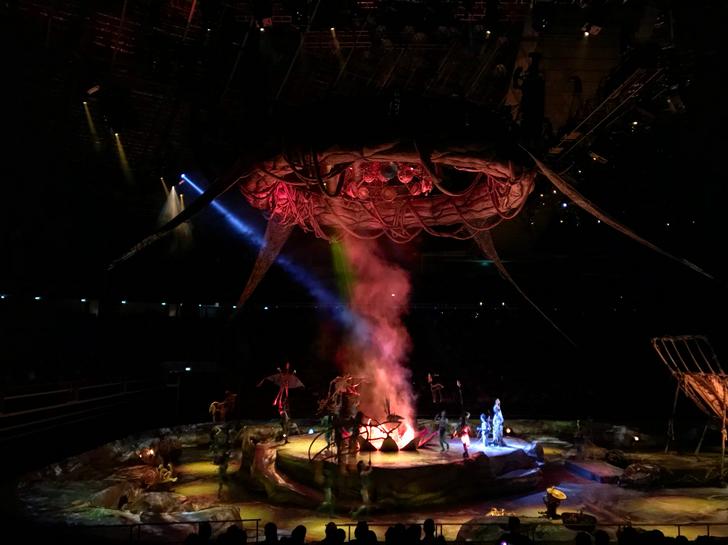 Stepping into the Indoor Stadium, there is a sense of mystery and anticipation as we await for the massive set to be completely unveiled. As a Na’vi shaman steps onto stage, blowing a puff of smoke and beginning to tell the story of how it all began, the seemingly ordinary set becomes awash in colourful light and projection mapping, and coupled with Guy Dubuc and Marc Lessard’s mesmerising music, one is immersed into the fantastic planet Cirque has created. 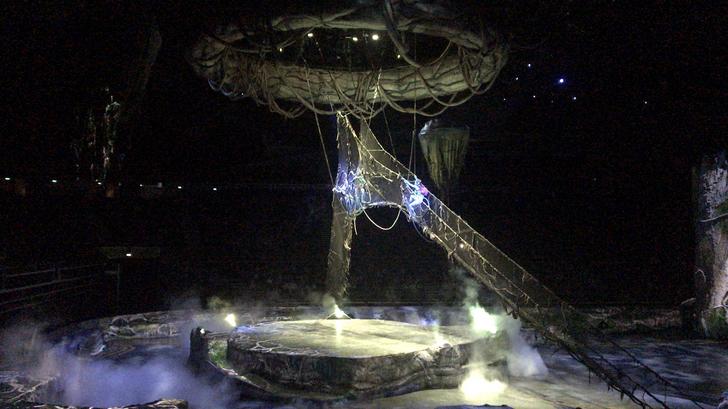 One feels transported to Pandora itself, and this is primarily due to the brilliant set, with projection mapping giving audiences a strong sense of location as the world ebbs, flows and shifts with each scene. One feels close to the action as cast members swing on ‘vines’ and run through the aisles across the area of the entire Indoor Stadium, while chanting and singing in Na’vi all around the audience, and it is almost as if we are one with these people. 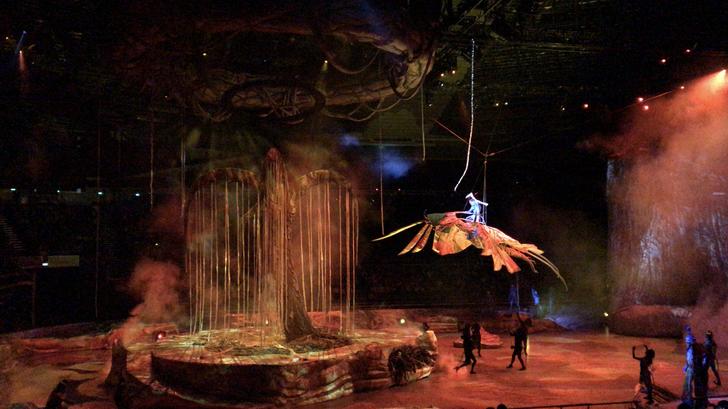 The effort that has gone into the detailing and world building is evident from every single design element. Kym Barrett’s costuming and makeup allows the actors to look like natural blue-skinned Na’vi, standing tall and moving cat-like as they handle their alien bodies like a second skin: tail, lengthy ponytail and all. Patrick Martel’s giant animal puppets, from the film’s Direhorses to the all new chicken-like Austrapedes, are piloted by performers within the puppets themselves as they move with grace and a degree of realism across the stage, while Carl Fillion’s set keeps one constantly on their toes with the sheer number of unexpected elements popping out of the trapdoors and coming down from the ceiling in each scene.

The emphasis on Toruk ultimately remains on its simple but accessible story, and how easily it flows throughout the show. As our protagonists wander through the world of Pandora, each of the five tribes they visit is clearly defined and demarcated by the projection and set changes. Whether it’s the appearance of a waterfall on the walls or lush greenery growing around you, scene transitions are seamless and professionally handled. Even during intermission, one never feels taken out of Pandora, as the house lights do not fully come on, and it becomes easy to return to your seat and join this world once again. Despite Na’vi being a completely foreign, alien language, it is through the actions and commitment of the cast that helps us understand and connect to the story in spite of the ‘language barrier’.

Even with overall less circus acts than most Cirque du Soleil shows, it was fascinating to see those that did come out creatively worked into the show. Pierre Masse has designed a particularly unique piece of equipment specially for Toruk, coming in the form of a skeletal platform, as four acrobats showcase their balancing skills upon it and carefully shift their weight around while it spins and wobbles on a single pivot.

The traditional ‘Chinese Pole’ act is given context when the poles become sharpened spears the tribe specialises in, while the ‘aerial silk’ act has its performer using it as a narrative element, climbing to the top to received a sacred item as opposed to performing for performance’s sake. Every act, imbued with the Avatar aesthetic, brings plot significance to it, making it feel all the more meaningful when executed. 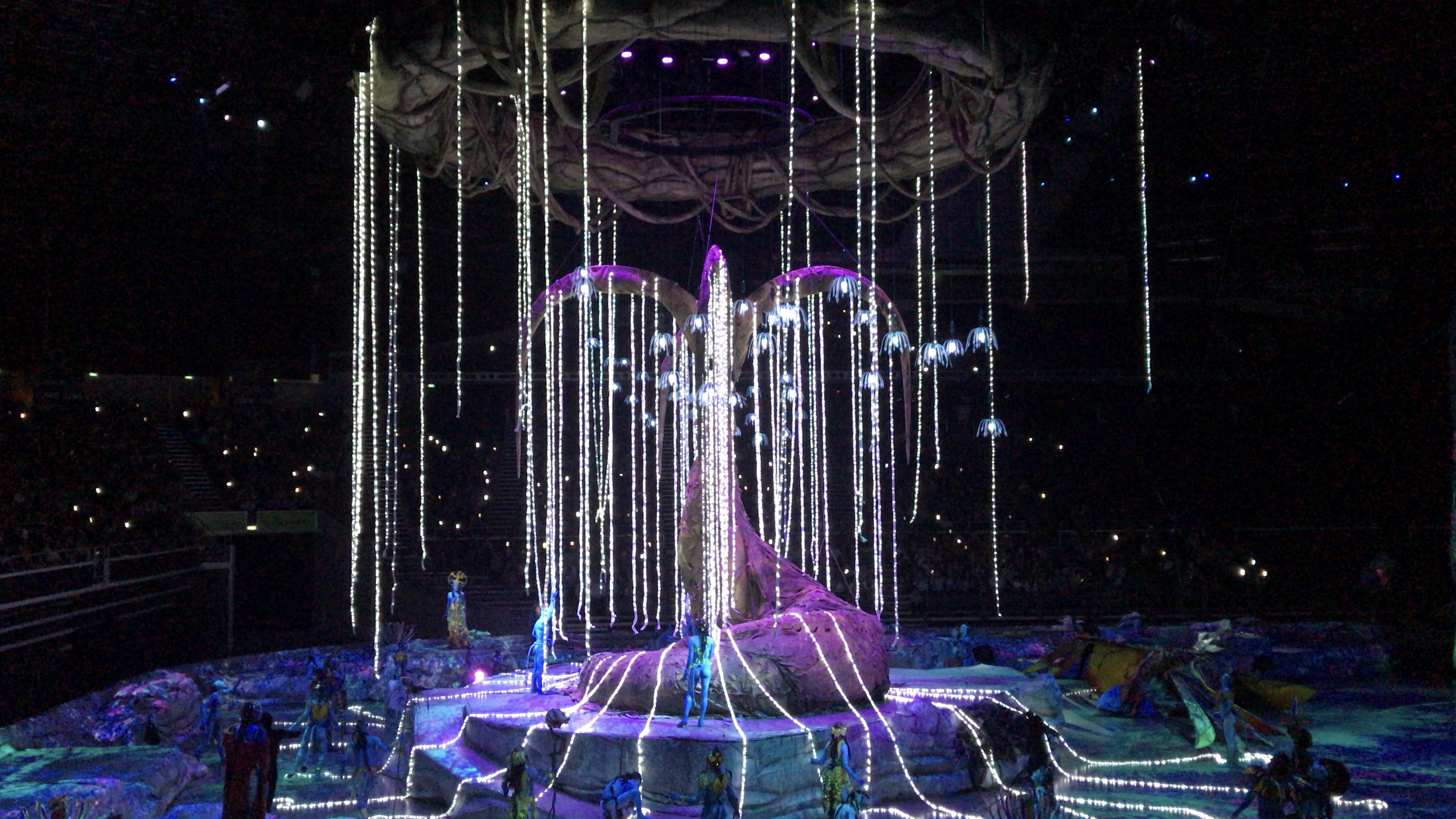 Toruk – The First Flight is a theatrical, visually stunning extravaganza of design that will please any Avatar fan and wow even those being introduced to Pandora for the first time. Cirque du Soleil’s professionalism, inventiveness and showmanship is what makes this production fly, and makes for a satisfying, magical standalone filler while waiting for the film sequel set for release in 2020.

You can listen to the full sound track from Toruk – The First Flight right here on Spotify.