A surreal, horror take on a classic Japanese legend.

Growing up listening to various folktales and legends from around the world, the Japanese legend of Urashima Taro has never struck me as particularly haunting or horrific. In the legend, the eponymous Urashima Taro is a poor fisherman who saves a turtle in trouble. As a reward for his heroic deed, the turtle invites him for a journey under the sea, where he meets the beautiful Otohime and is promised a life of eternal pleasure. When he returns to the surface, he finds that everything and everyone he once knew has disappeared, and that he has become an old man, akin to the Western tale of Rip Van Winkle. 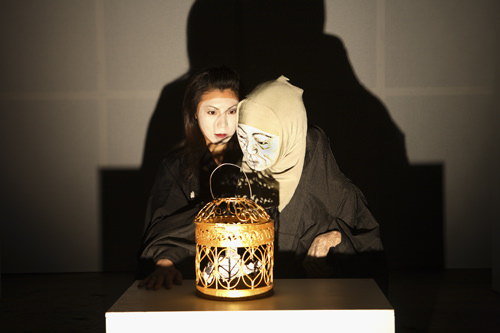 In Rouge28 Theatre’s version, solo artist Aya Nakamura has manipulated the tale to bring out far darker elements than the tale initially lets on. Otohime is no longer a neutral presence, instead, she has become succubus-like, tricking innocent men to their doom as she lures them into her her dark, murky and lonesome underwater dwelling, helped by the bare set, save for a single tiny table backgrounded by translucent, ghostly screens. The children Otohime births with her human victims become shelled, half-turtle monstrosities, filled with petulant rage and demonic, inhuman faces. Urashima Taro himself (in puppet form) holds an unchanging expression of a man who has lost his soul, haunted by regret for the life he has left behind and fear at this new reality he has found himself in. 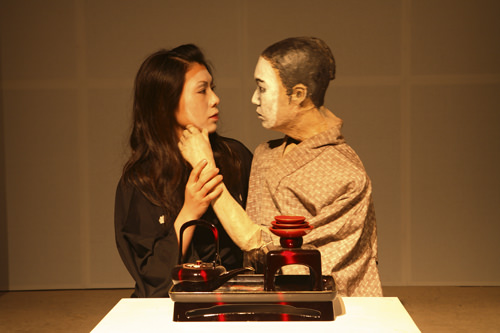 Nakamura uses a range of puppetry methods to bring all this out – she is a master of manipulation, and her arms no longer belong to herself as they transform into that of her depressed looking, facially realistic puppets. Nakamura herself plays Otohime, face painted ghostly white as she expresses both innocence and seduction while interacting with various puppets. She uses video projection with paper miniatures to tell the main crux of the story, linking the show to traditional puppet theatre. 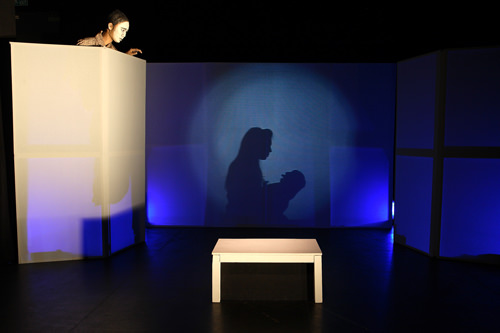 Meanwhile, she uses shadow puppetry and her own silhouette to showcase the darker elements of the play, adding an air of mystery as she takes Urashima Taro to her bedside behind the screens, a projection of grey waves playing to add atmosphere to the scene. One is reminded of vintage German expressionist horror films like The Cabinet of Dr. Caligari upon witnessing these scenes. There are multiple instances where it becomes impossible to tell reality from nightmare, and one feels a sense of entrapment and claustrophobia watching Urashima Taro struggle with his own conscience and listening to the creeping soundtrack that plays alongside each scene.

Aya Nakamura’s surreal, contemporary take on the classic legend showcases the visual impact good puppetry can have on breathing new life into an old tale, a skilful performance that haunts with its atmosphere and left us disturbed by the horror elements it introduces into this piece of folklore, effectively delivering its message of the lethal consequences of shirking one’s responsibilities.