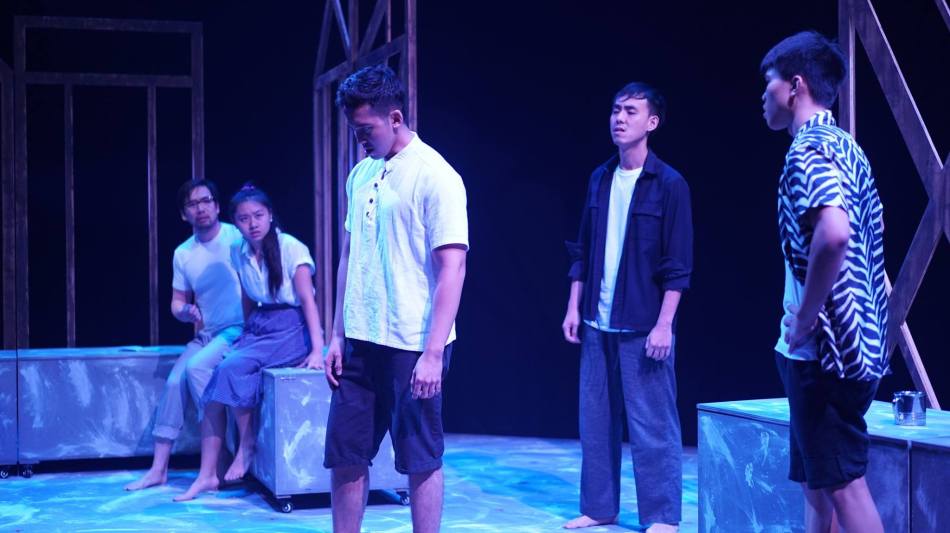 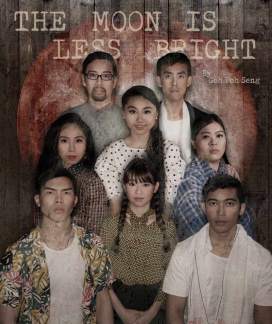 First staged over 50 years ago, Goh Poh Seng’s The Moon Is Less Bright is a classic of the Singapore literary canon. Set in a small farmhouse on the outskirts of Singapore, worlds collide when a shopkeeper brother who lives in town has to stay with his farmer brother in the country to escape from the danger caused by invading Japanese. Over conversation and through their interactions, tensions rise as the two families’ difference in class and attitudes clash, building to a fever pitch as the Japanese Occupation too reaches its peak, irrevocably changing their lives forever. 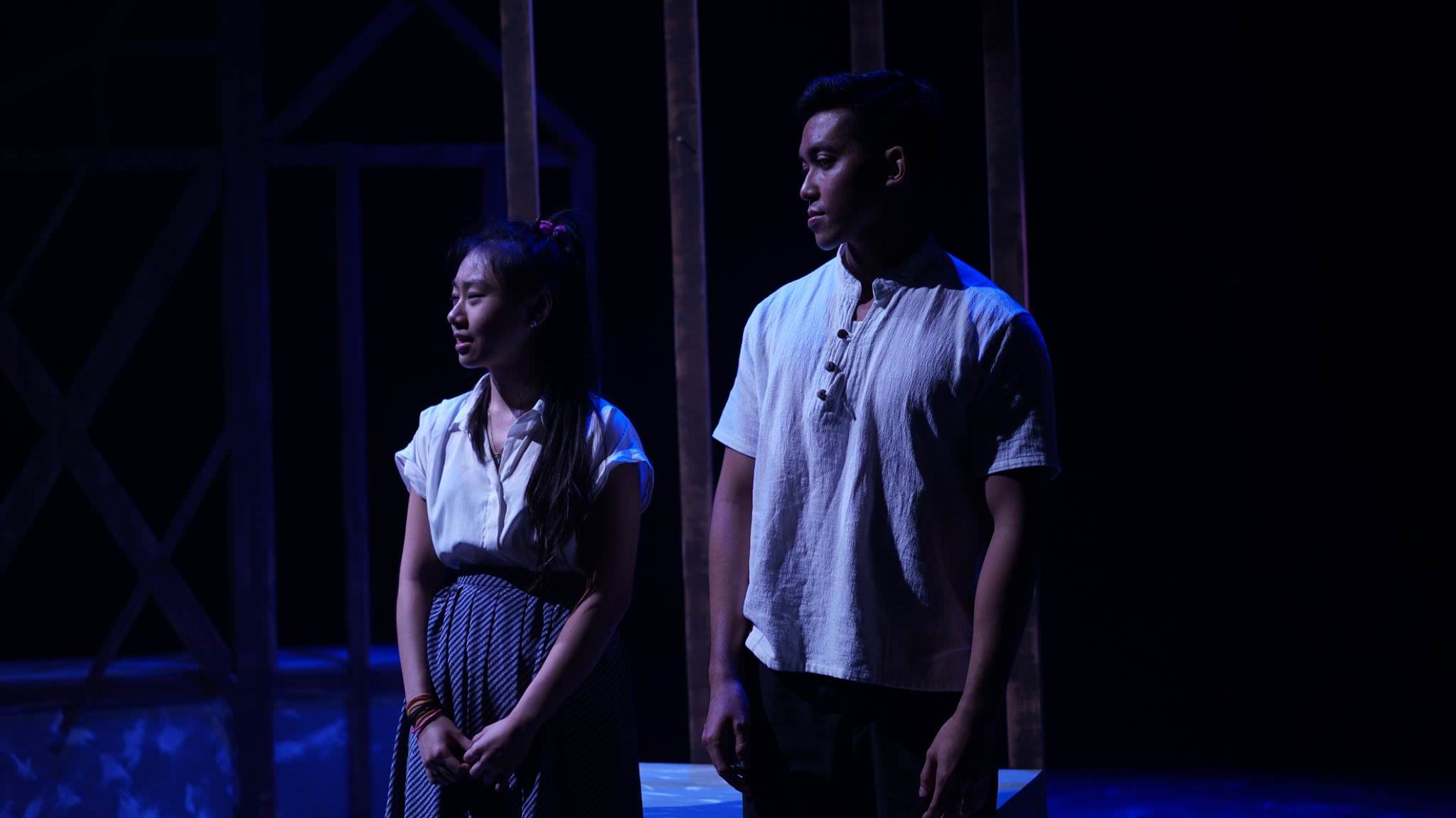 Despite its age, Goh Poh Seng’s script holds up even today, its poetic language remaining one of its strongest elements as it brings out the air of fear and uncertainty all around Singapore, with angry farmers speaking of a revolution on its way, its fierce criticism of classism, and the fervent belief that change and understanding can happen in the next generation. It’s a play that’s heavily reliant on the capabilities of its cast to bring out the full impact of its language, and requires strong chemistry on their part to make clear these entrenched beliefs in class differences, and to feel the strain and antagonism that build over the course of the performance. 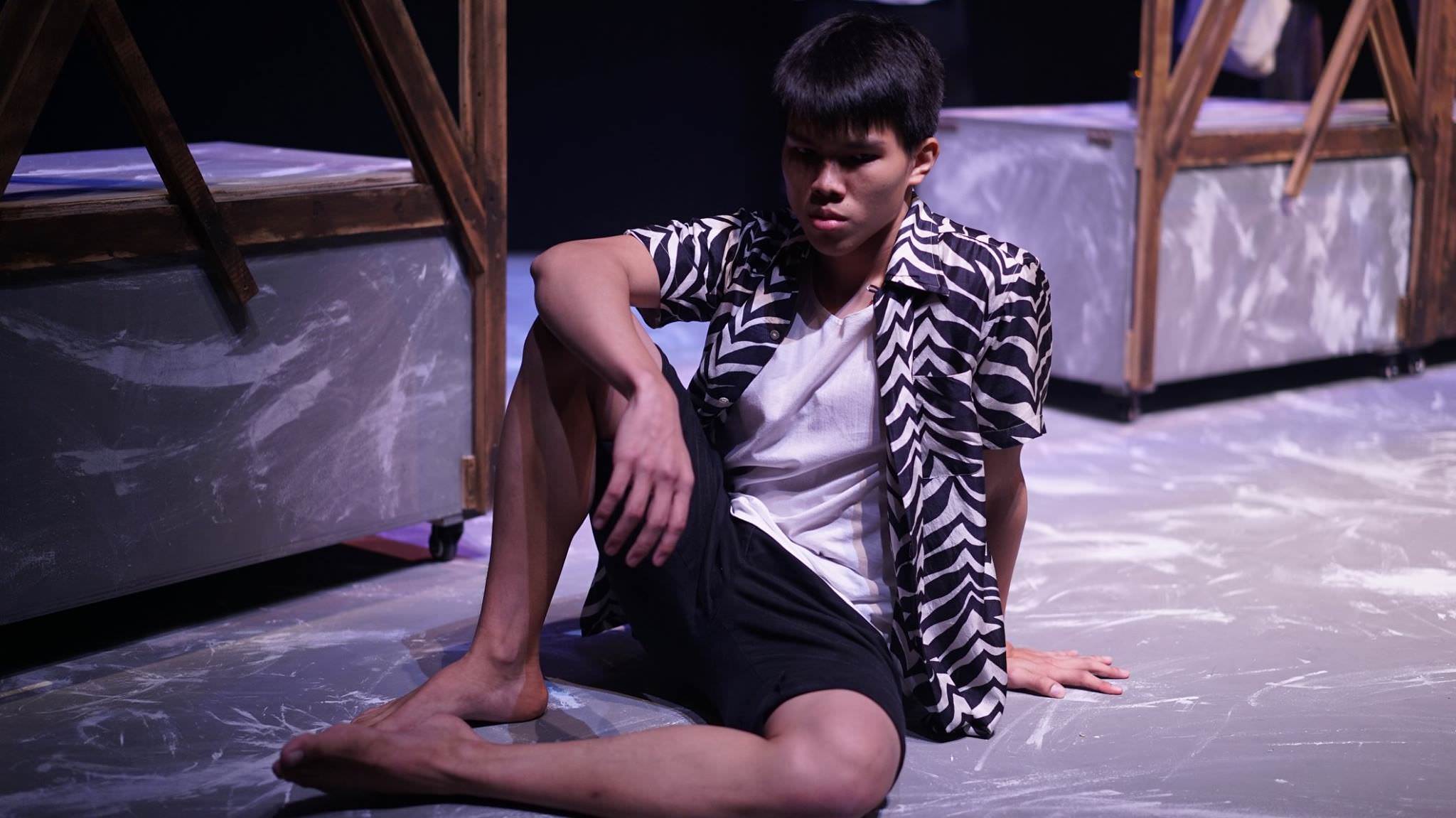 In the Second Breakfast Company’s (2BCo) staging, they’ve gutsily gathered a group of young actors to take on the challenge. Directed by 2BCo artistic director Adeeb Fazah, the revival of The Moon Is Less Bright has its heart in the right place, aiming to make clear its themes of class in a world where social stratification is becoming increasingly rampant across the country. There has been a good effort at casting actors who can easily adapt to the core personalities of each role – Cheryl Tan as Choo Leng, a young ingenue willing to learn from the farmers, Lynn Chia as Lian, a headstrong country girl, Benjamin Koh as perpetually angry upstart Ah Seng, Fadhil Daud as languorous, romantic brother Ah Huat and Xie Shangbin as tired, laboured father Kim Hong. 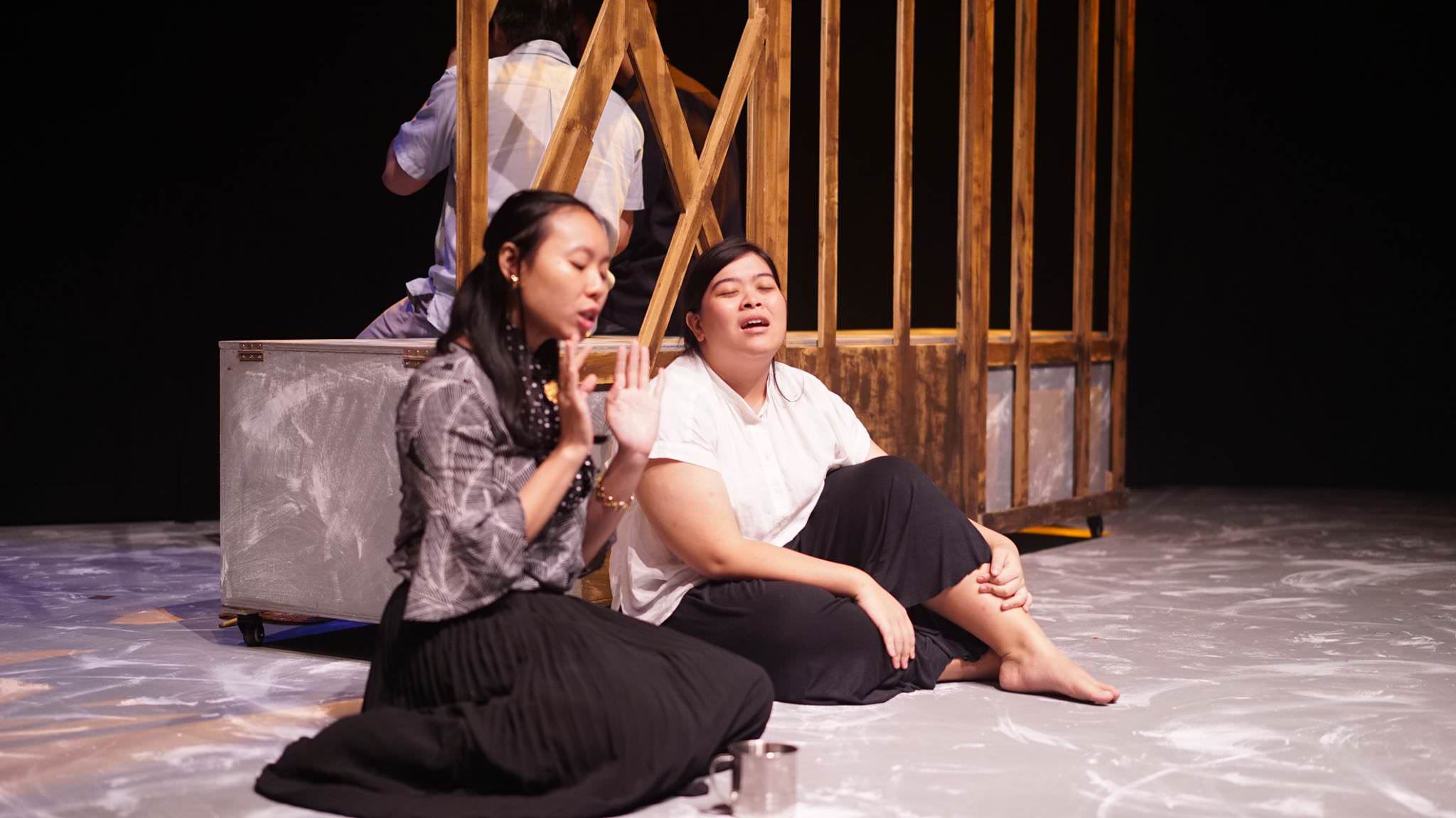 Of the cast, Miriam Cheong and Qotn Van S.Y. especially stand out as particularly committed to their roles, both playing contrasting maternal figures – the former as Poh Suan, a simple farmer’s wife who believes in letting her children figure out their own relationships, and the latter as sister-in-law Chee Hoon, a stubborn, haughty middle class woman, steadfast in her belief in division along class lines and the importance of family background when engaging in a relationship. These opposing beliefs comes to a head when they tackle the issue head on, with Qotn attempting to shout to no avail over the sound of Miriam loudly, angrily pounding away at a mortar and pestle. Qotn also shares good onstage chemistry with Ivan Choong (playing her husband Kim Chuan), and the two share an uneasy, unequal relationship that’s plain to see from their bickering. 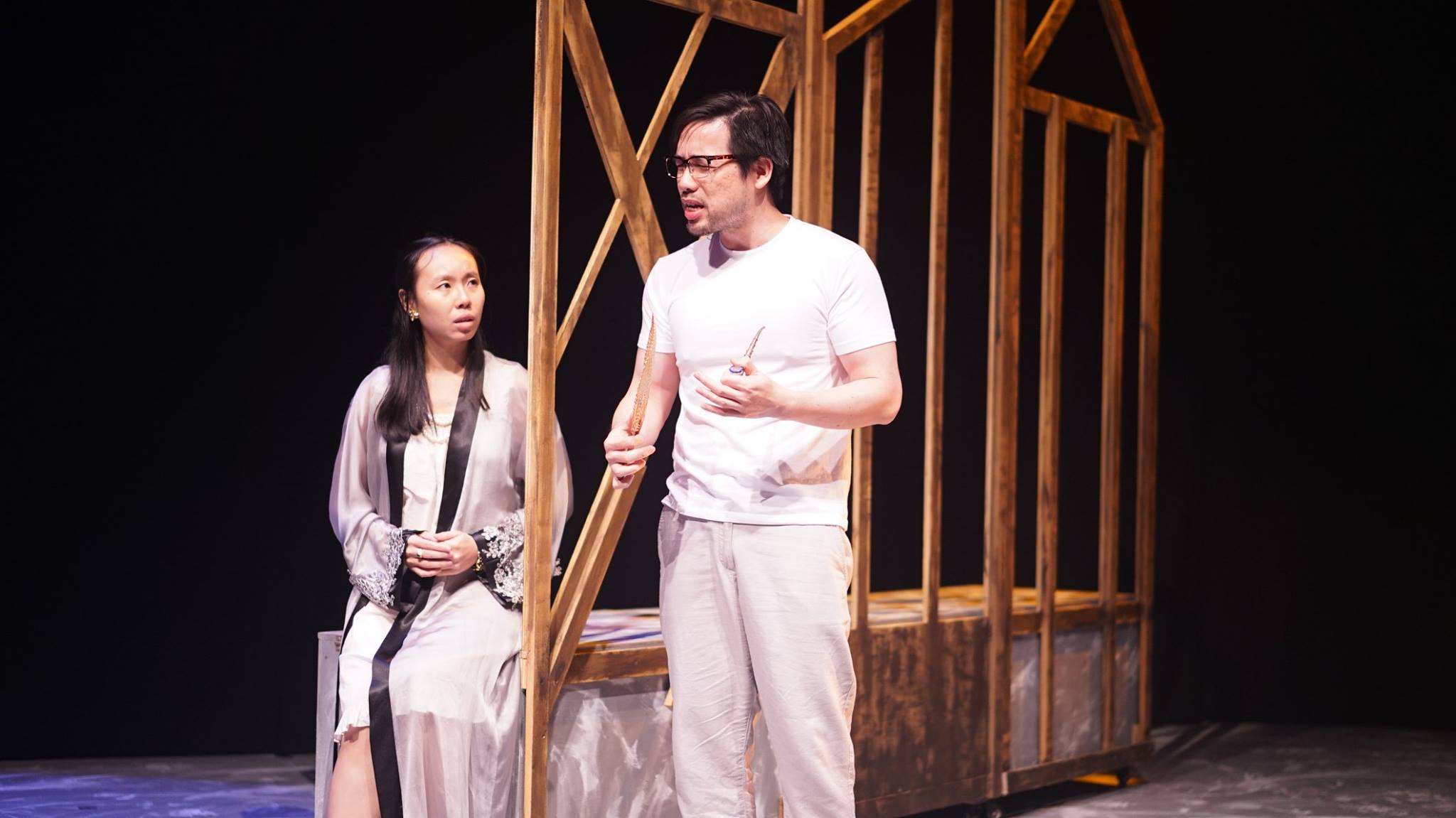 Jim Chan’s lighting is effective at recreating the difference in night and day onstage, and helps bring out the mood of each scene, in conjunction with Mark Cheong’s unnerving soundscape leaving one feeling uneasy each time it crackles and plays. This creates the constant sense that something is about to go horribly wrong, and there is an ominous mood that is hanging in the air in almost every scene, alongside the grey, craggy flooring used, resembling a barren lunar landscape. The Moon Is Less Bright also adopts a minimalist set (also by Mark Cheong), comprising a movable six piece set of rearrangeable wooden, gate-like structures; though abstract, their height (almost double of most cast members) and variation in arrangement were sufficient for us to imagine the cast moving through various locations within the farmhouse. 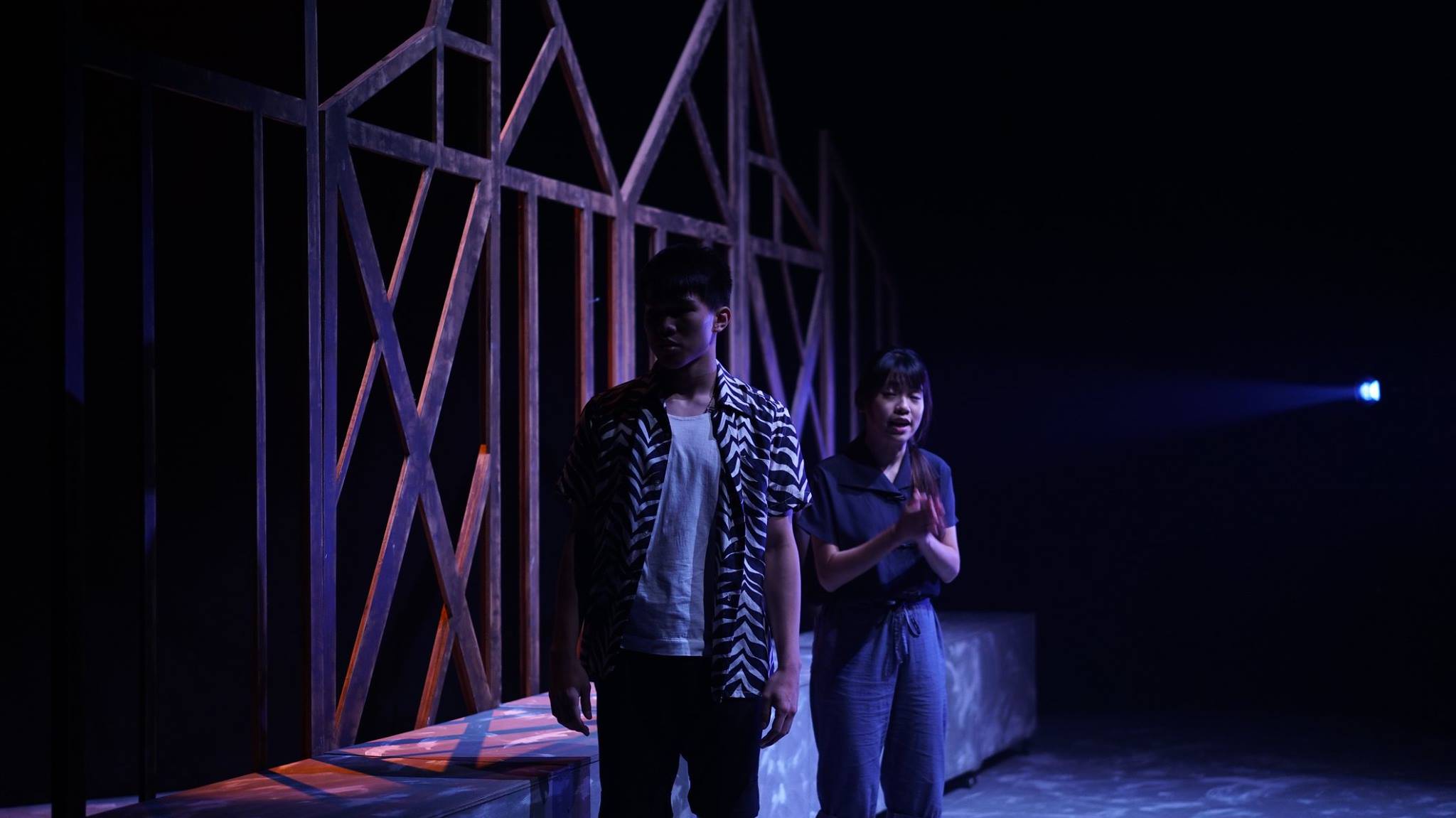 However, as bold and well-meaning as it was to stage this piece, it was difficult to feel the emotional nuances from some of the cast members, whose performances were of varying consistency and lacked the ensemble chemistry required to bring out the full weight of The Moon Is Less Bright’s overarching tragedy. The performance ends up lacking, feeling simply like execution of the script as opposed to wringing the audience through a gauntlet of emotional trauma and truly convincing us to stand by these characters, leading to its eventual tragic ending feeling far less impactful than it could have been. 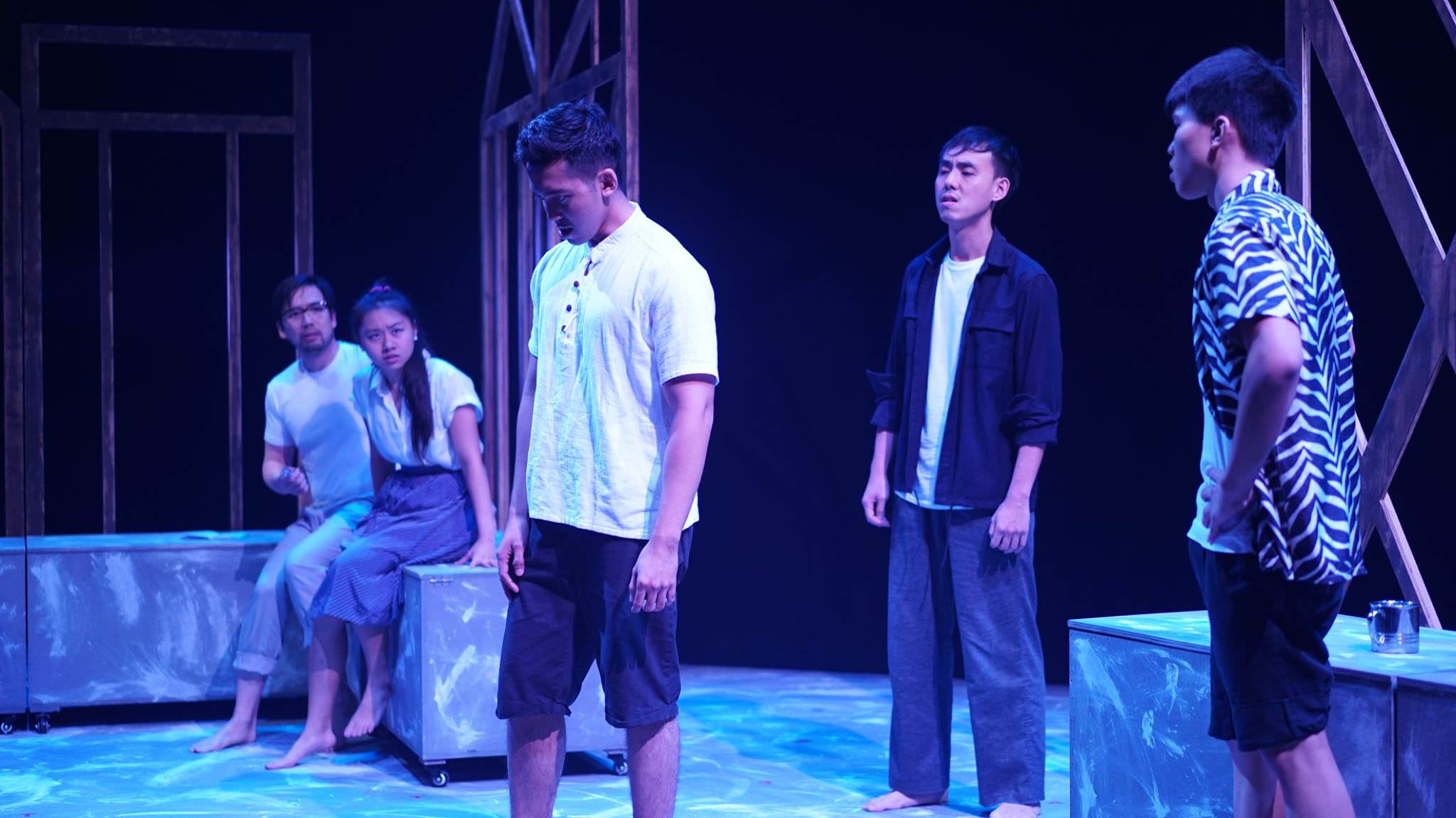 As they celebrate their second year, 2BCo is making a commendable effort at growing increasingly professional with each production, and it’s heartening to see this young company’s ambition in staging a full revival of such a classic work. One hopes that come November, their production of new original work The Old Woman and the Ox by Isaiah Lee will attempt to push them to further heights.

The Moon Is Less Bright plays at the Drama Centre Black Box from 31st May – 3rd June. Tickets available from SISTIC

1 comment on “Review: The Moon Is Less Bright by The Second Breakfast Company”