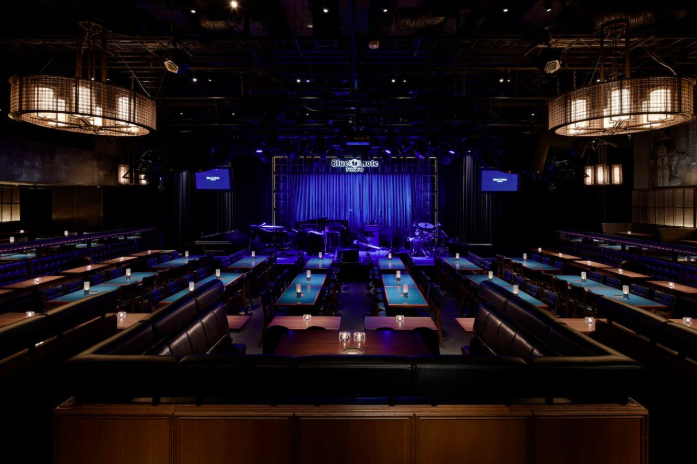 I’m convinced Tokyo is one of the most magical megalopolises to exist on the face of the earth. Beyond being situated in Japan (no doubt a favourite country of ours), there’s life all about the city from the crack of dawn to the fading of the last sunbeams. And in particular, Roppongi comes out tops when it comes to the king of Tokyo nightlife.

But edge away a little from the stereotypical tourist traps and off the beaten track. Over at the Minato district, it’s oddly quiet while the surrounding areas buzz with noise and activity. The is a place that actually sleeps, save for a single building – the one that houses the super high-end, classy jazz joint Blue Note Tokyo.

If there’s any Asian country that knows how to do and appreciate jazz, it’s Japan. Kindred spirits and distant cousin with its counterpart Blue Note New York in NYC,Blue Note Tokyo was first opened in November 1988 and currently seats about 280 people in this cosy but classy establishment. Over the years, Blue Note Tokyo has hosted multiple international jazz musicians ranging from Sarah Vaughan to Tony Bennett, Chick Corea to the Jim Hall Quartet. Multiple time Grammy Award nominated jazz musician and composer Toshiko Akiyoshi has even performed and released several albums of live recordings in the club, and Blue Note Tokyo has since established itself as the place to be seen and to catch a glimpse of the hottest jazz acts of today and tomorrow.

Stepping into the club, one immediately gets a sense of old school New York charm mixed with modern furnishings to create a stunning atmosphere perfectly suited for a jazzy night out. You’ll be welcomed by spiffily dressed front of house staff, who greet you with respect and utmost courtesy, and there’s this immediate blast of energy and fervent excitement that emerges from the club’s interior as you enter. When we visited in January, we got a chance to catch Hannah Williams and the Affirmations, who were then recently featured on Jay-Z’s 4:44. Flaunting scarlet hair and strutting out confidently onstage, Hannah’s powerful, soulful vocals rocked the stage while the Affirmations backed her up with some unforgettable tunes to jive to, making for an evening to remember.

Blue Note Tokyo will be celebrating their 30th Anniversary this year, and as part of their celebrations, have invited bands such as Ray Charles tribute band “This Is Ray Charles” last week to legendary French composer Michael Legrand in July. Other highlights in the summer season include Brazilian-Japanese bossa nova darling Lisa Ono as she and guests Paulo and Daniel Jobim celebrate the 60th anniversary of bossa nova, while American singer Stacey Kent will grace the club in September. While the cover charge may seem higher than usua, the performances are divine, and are sure to leave a lasting impression no matter who you see. Just make sure you visit their website and refer to their schedule so you can plan your visit around the performance nights, and you’ll be in for a classy, jazzy, wild ride of a night.

0 comments on “Blue Note Tokyo: A Touch of Class In The Heart of Tokyo”