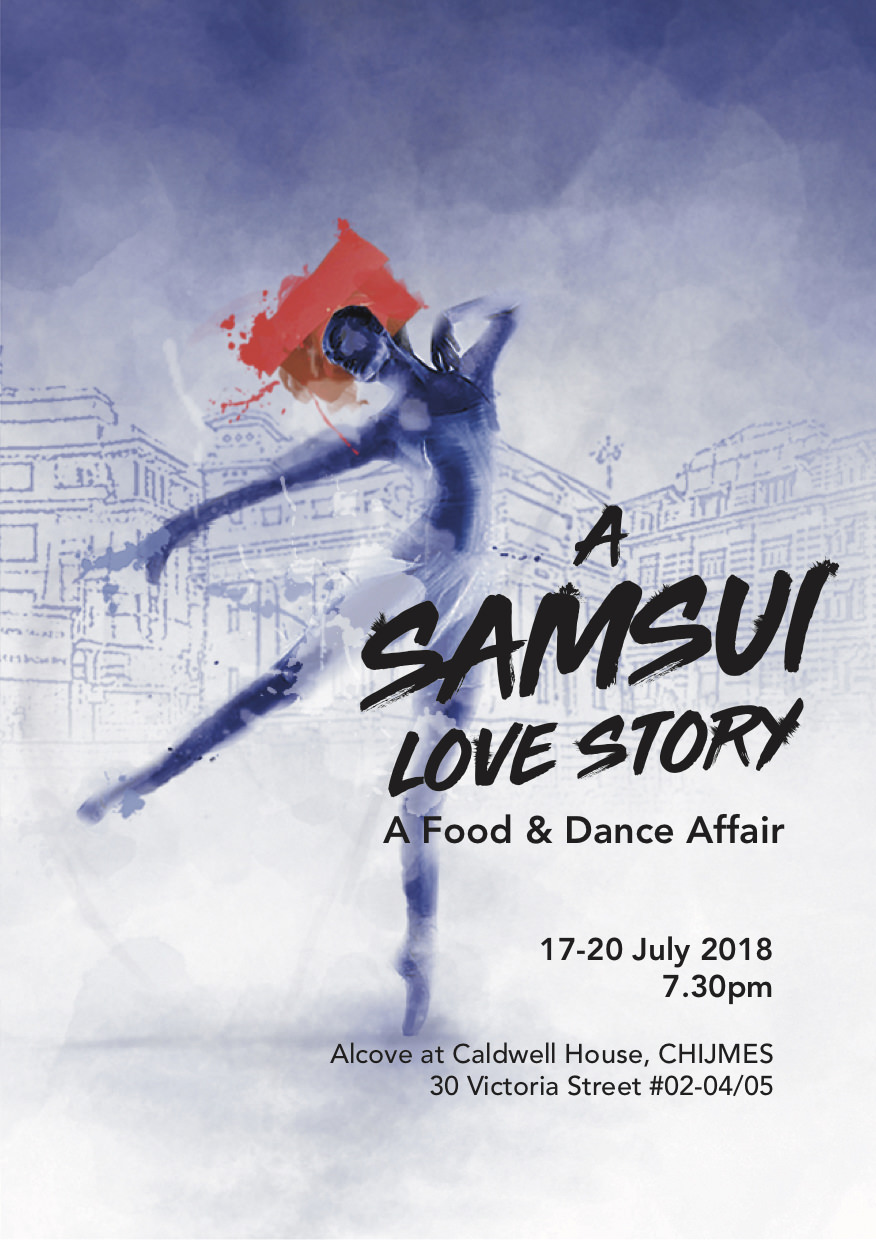 While theatrical dining experiences have become increasingly popular in the last few years, mixing dance and dining is a road far less travelled, perhaps owing to how abstract contemporary dance can be, making it difficult to form an immediate link to the menu at hand. But with years of experience under their belt, Project Plait has managed to craft this multidisciplinary performance style into an incredibly palatable one, presenting both a five course meal and a worthy dance performance into a single, cohesive show in A Samsui Love Story. 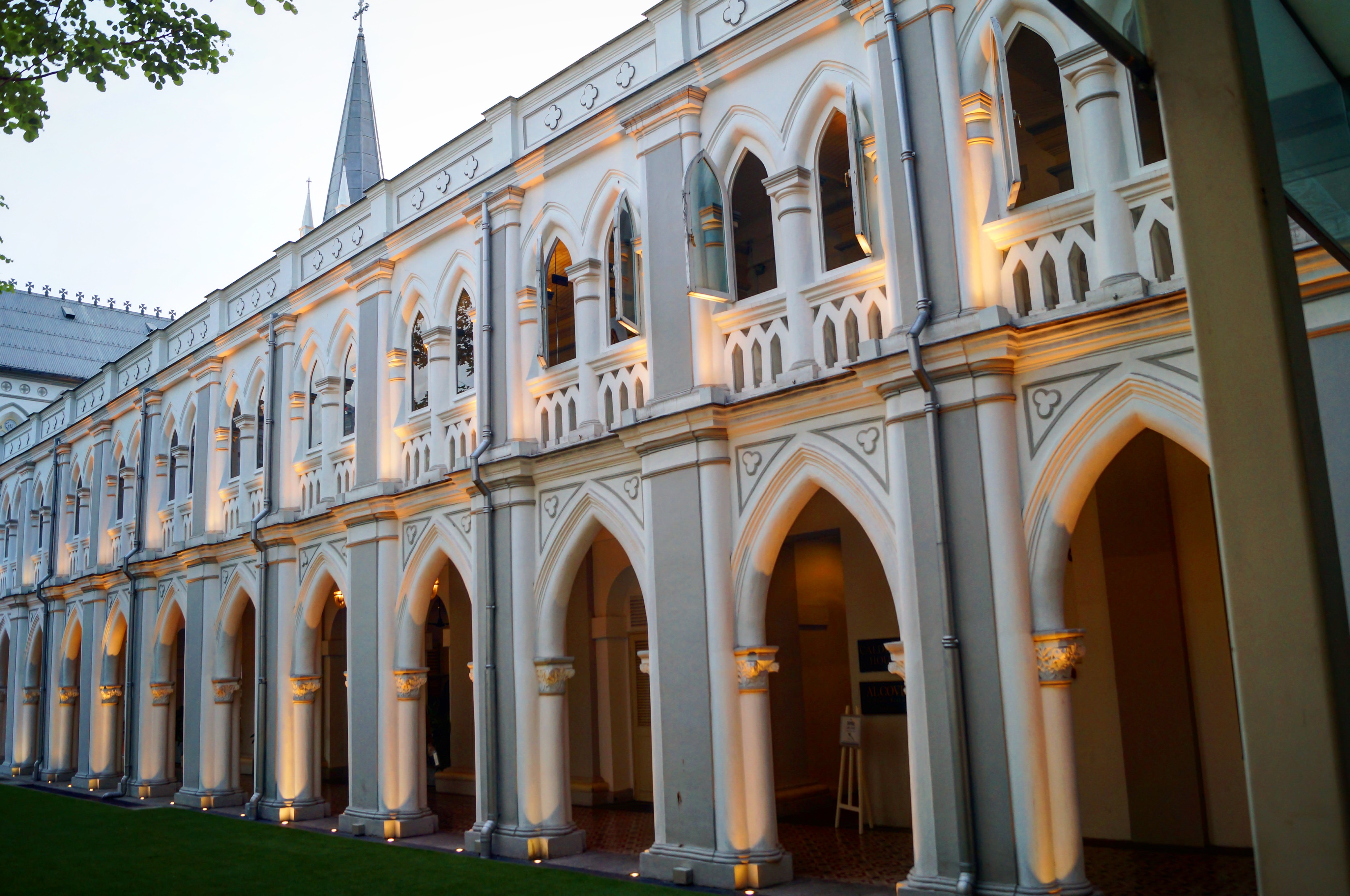 CHIJMES is undoubtedly one of the most beautiful and iconic buildings in Singapore and a perfect location to host an event as this. Climbing up the stairs to reach Alcove, we were immediately drawn to just how well its colonial aesthetic has held up over the years. and perfectly suits A Samsui Love Story’s epic story set during World War II about two star crossed lovers. In addition, by presenting a quintessentially Singaporean story (the two lovers are a Samsui woman and a ‘satay seller’), this gives Project Plait the perfect opportunity to craft an equally Singaporean menu (by Chef Nixon), tying in well with being part of the Singapore Food Festival. 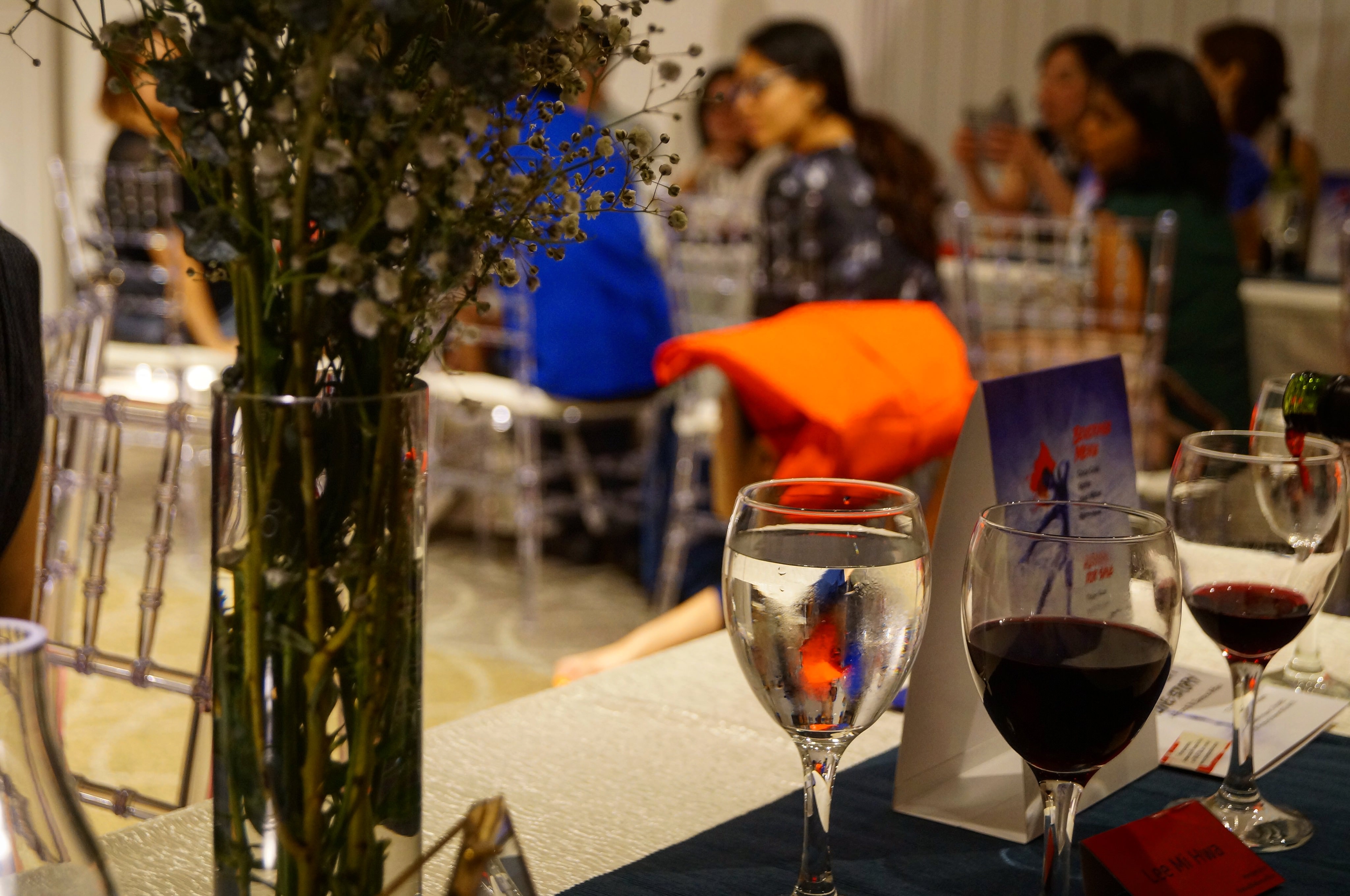 A Samsui Love Story began our food and dance affair with a set of appetizers: tuna served atop watermelon. and kuih salat, a pressed glutinous rice cake with kaya. While seemingly simple, these were served with much class, alongside a comfortable and elegant the table setting. While we got settled in our seats, we gazed upon the video landscape that took us straight back to 1937 where our story began, setting the tone and immersing us in the time and place where the performance was set. 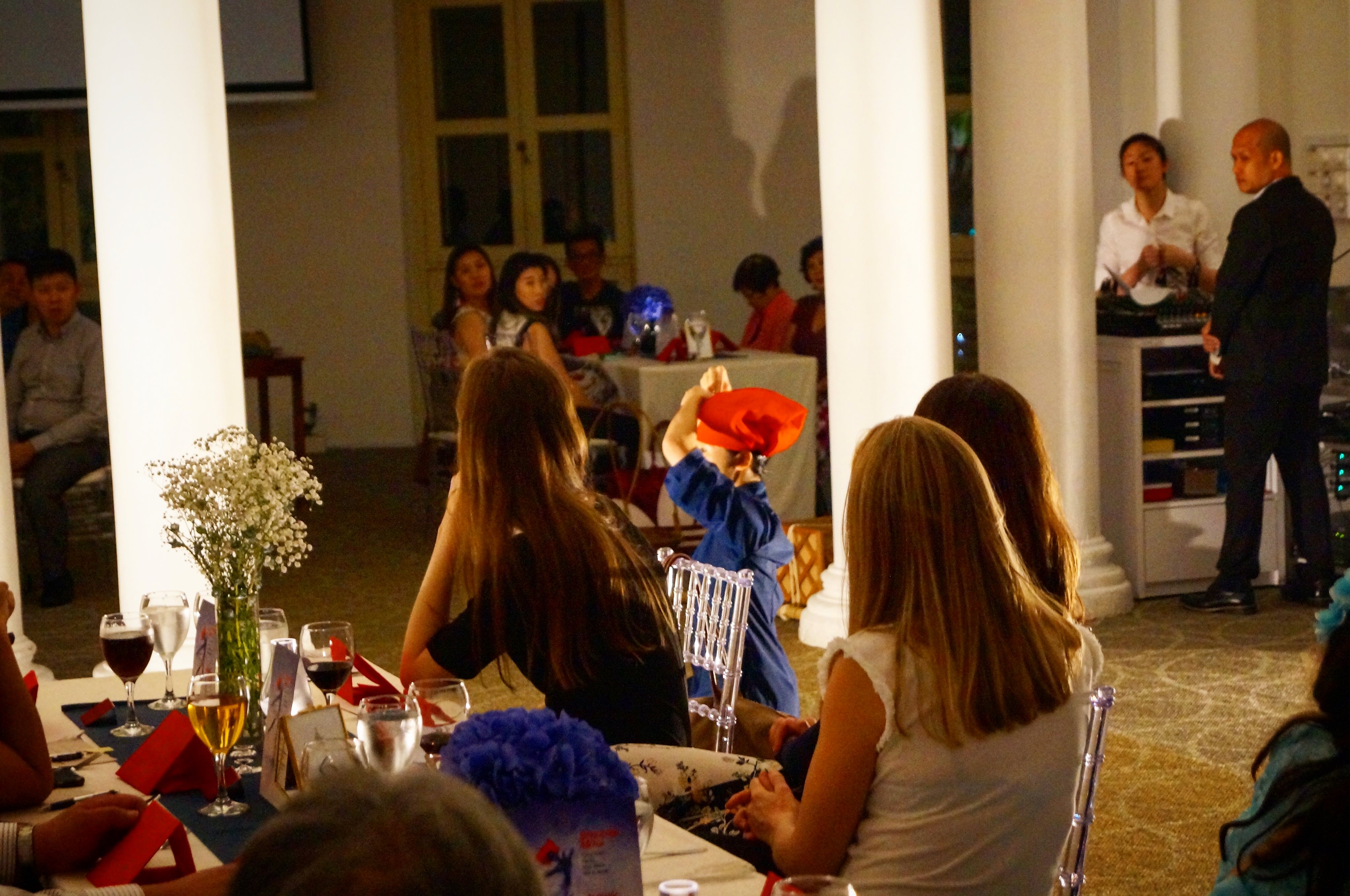 The performance itself began with the eponymous Samsui Woman known only as Her (Natalie Lin). Natalie began by tying the iconic hat, or hong tou jin (literally red head scarf) around her head, doing it with so much precision and care that the act seemed to take on a ritualistic quality, elevating it to a work of art. While well choreographed by Naomi Tan, there were certain restrictions the unusual space provided that made it difficult for audiences to catch what was happening, due to our higher seating obscuring our ability to see the abundance of floor work Natalie performed. We were then introduced to the ‘satay man’ (Alvin Toh), in reality an undercover lieutenant of the police force to gain a better understanding of the situation on the ground. 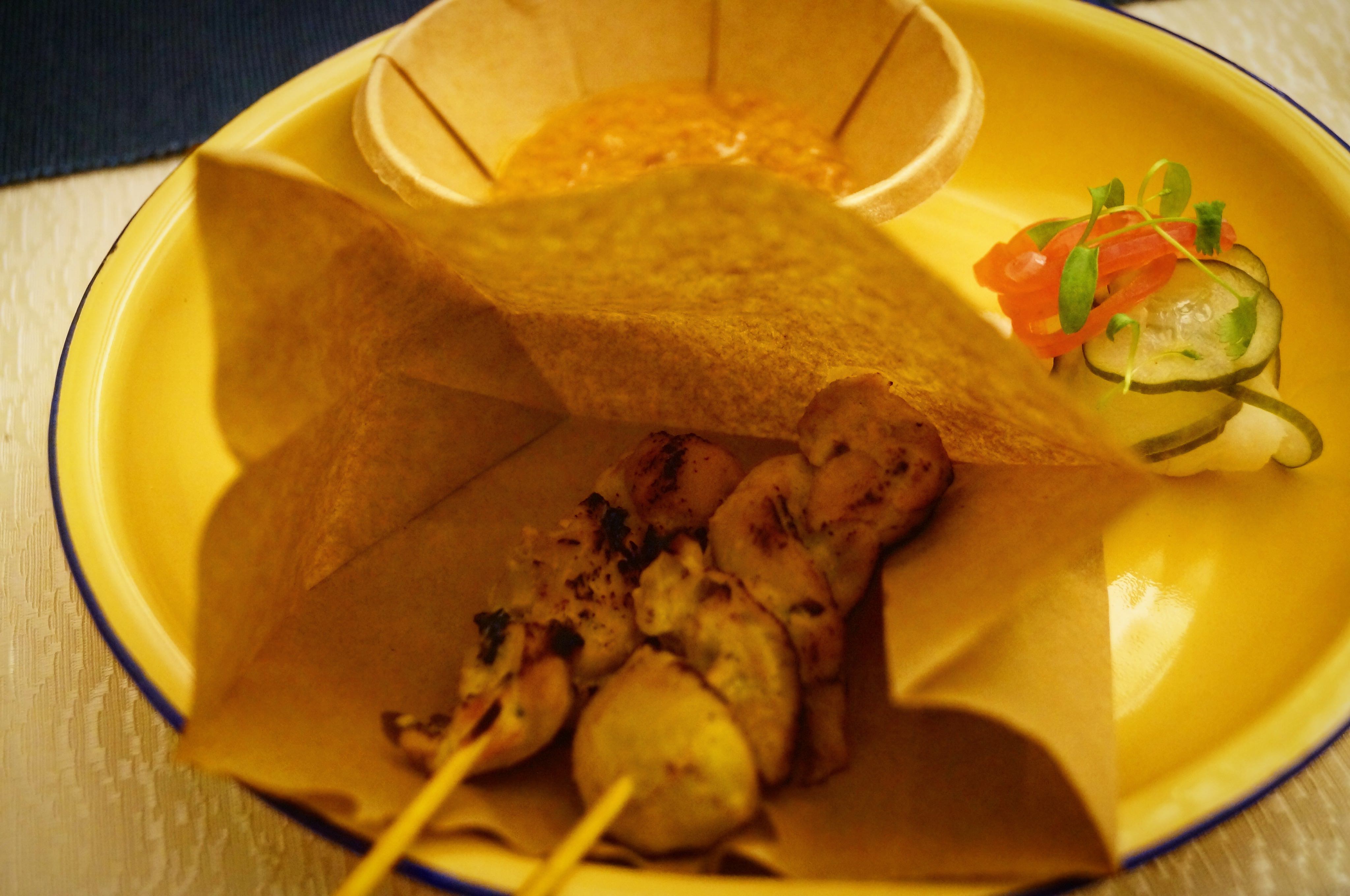 Naturally, with the introduction of the ‘satay man’, we were then presented with the first dish of the night – satay. This was a well-seasoned, well-grilled satay, and even had a hint of ‘char’. This was served with a soft, luscious ketupat, while the dish also replaced the usual cucumber and onions with pickled radish and pickles, giving it a unique flavor profile. 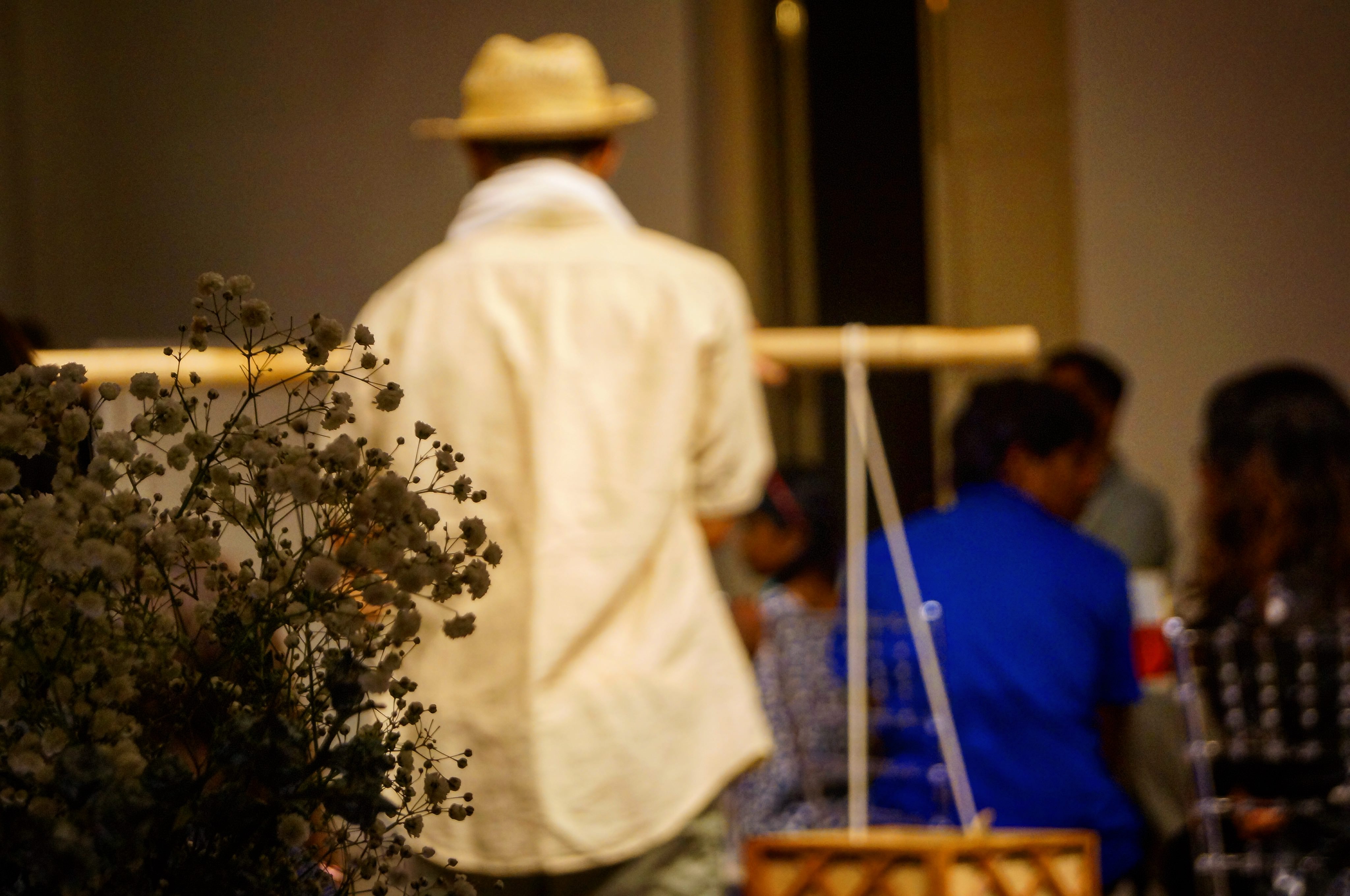 There’s a sweet believability to the romance built up over the course of the performance – while Natalie eats her lunch (porridge in a tingkat, a nice traditional touch), Alvin tries and fails to light his stove with matches. In going over to help him, this leads to yet another dance sequence, as we witnessed both dancers moving gracefully across the space and fully bringing out the emotions within the scene. As rain begins to fall, both dancers find themselves in each others arms under an umbrella, before he offers her a stick of satay he has prepared, cementing the sweet love the two share. 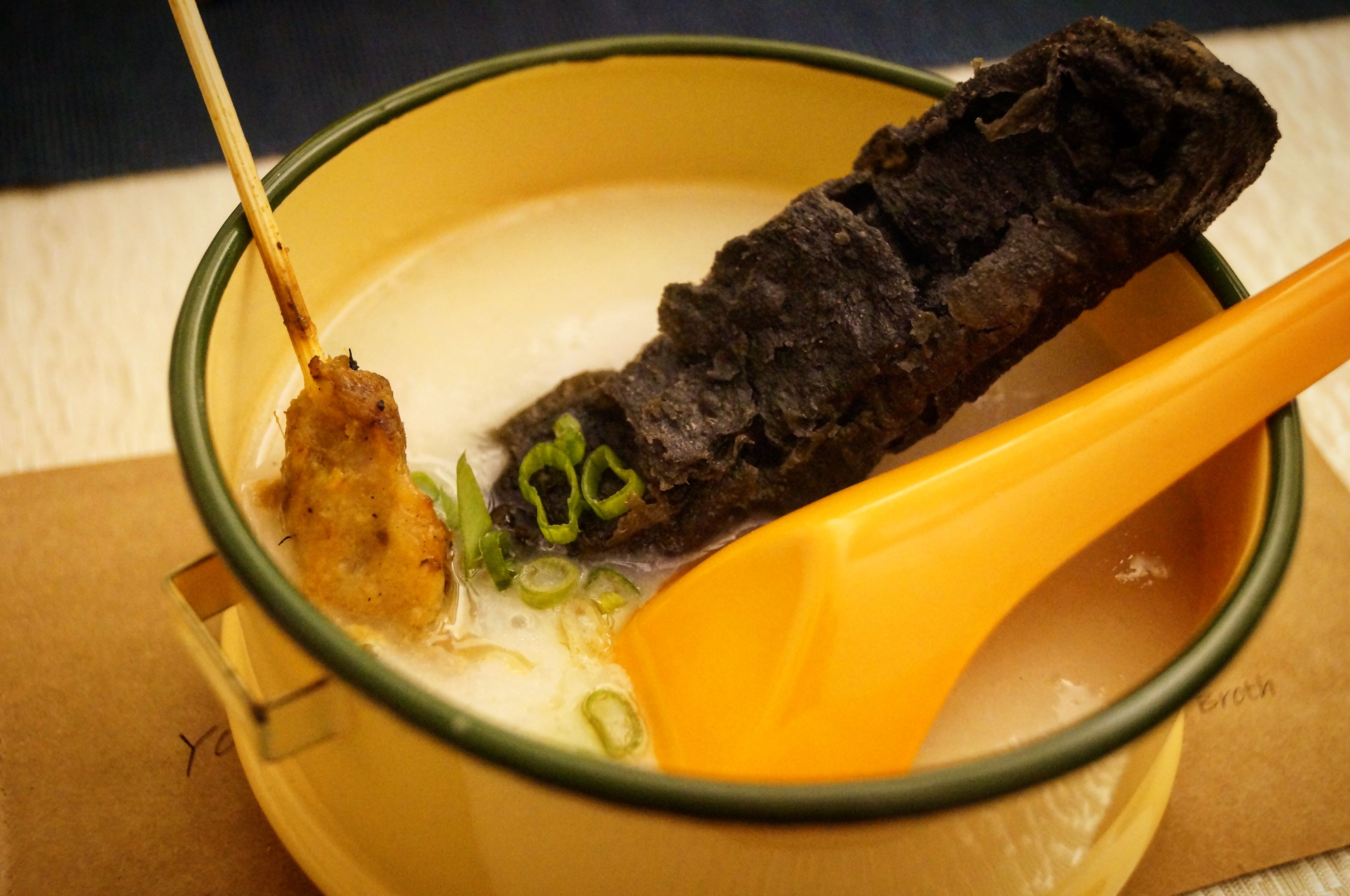 Aptly enough then, to warm our hearts and tummy, our next dish was porridge served in a tingkat, alongside a charcoal youtiao and complete with a stick of satay to match the scene. This dish was named “You made the simplest porridge taste heavenly”, and indeed this ‘plain porridge’ was incredibly rich, filled with scallops, abalone and shrimps, brought together with a superior seafood broth. The fresh seafood taste shines through in the porridge, and tied in perfectly with the story while also being delicious. 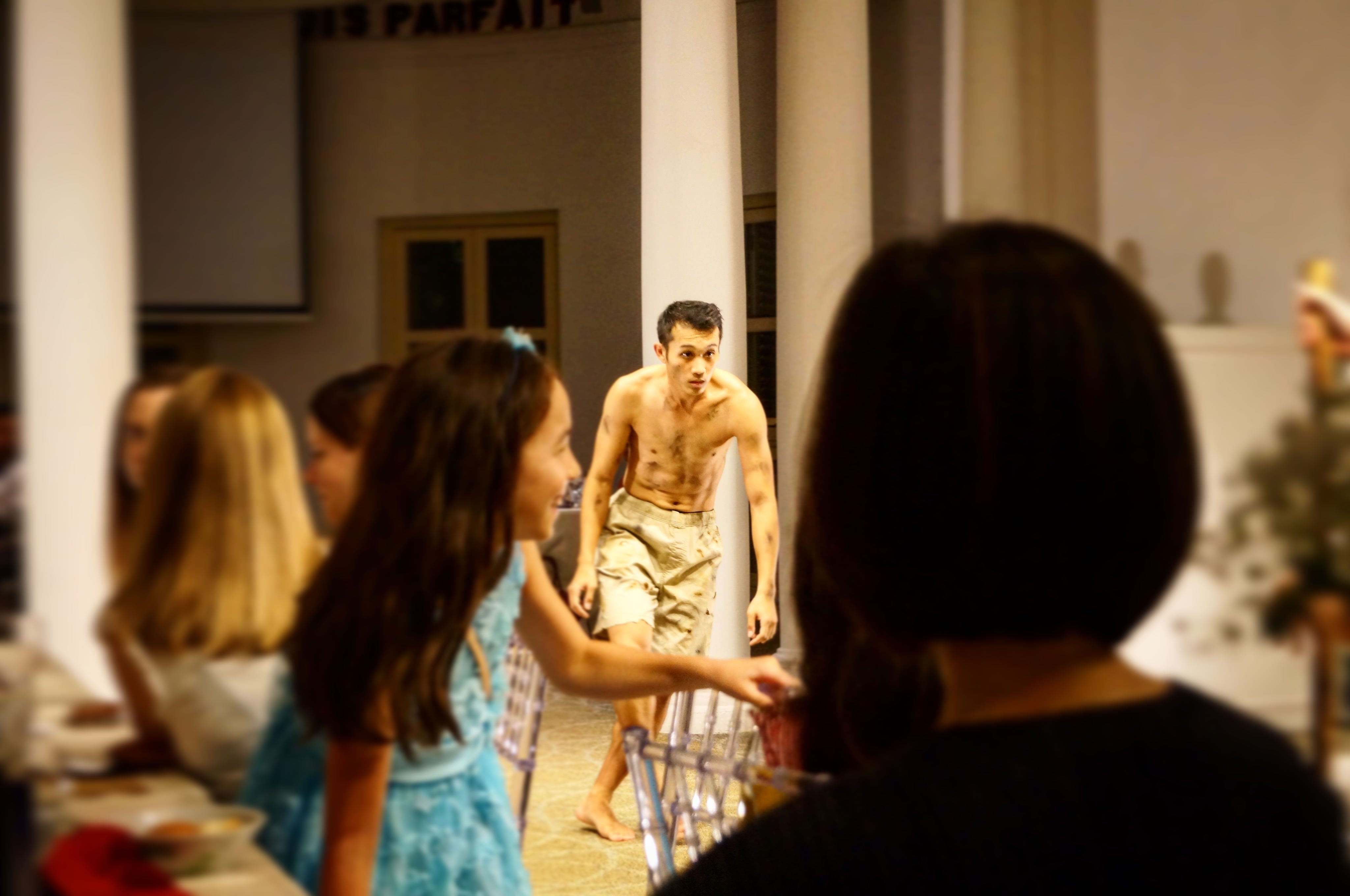 Throughout the performance, the dancers managed to create a keen sense of playfulness, as if they were continuing to discover each other each time. As the satay man reaches out to hold the Samsui woman’s hand, she turns away embarrassed. There was plenty of push and pull movements from either dancer as they grappled with each other, flirting and teasing with every step, eventually resulting in an embrace we could believe in and paid off emotionally after such a big buildup. 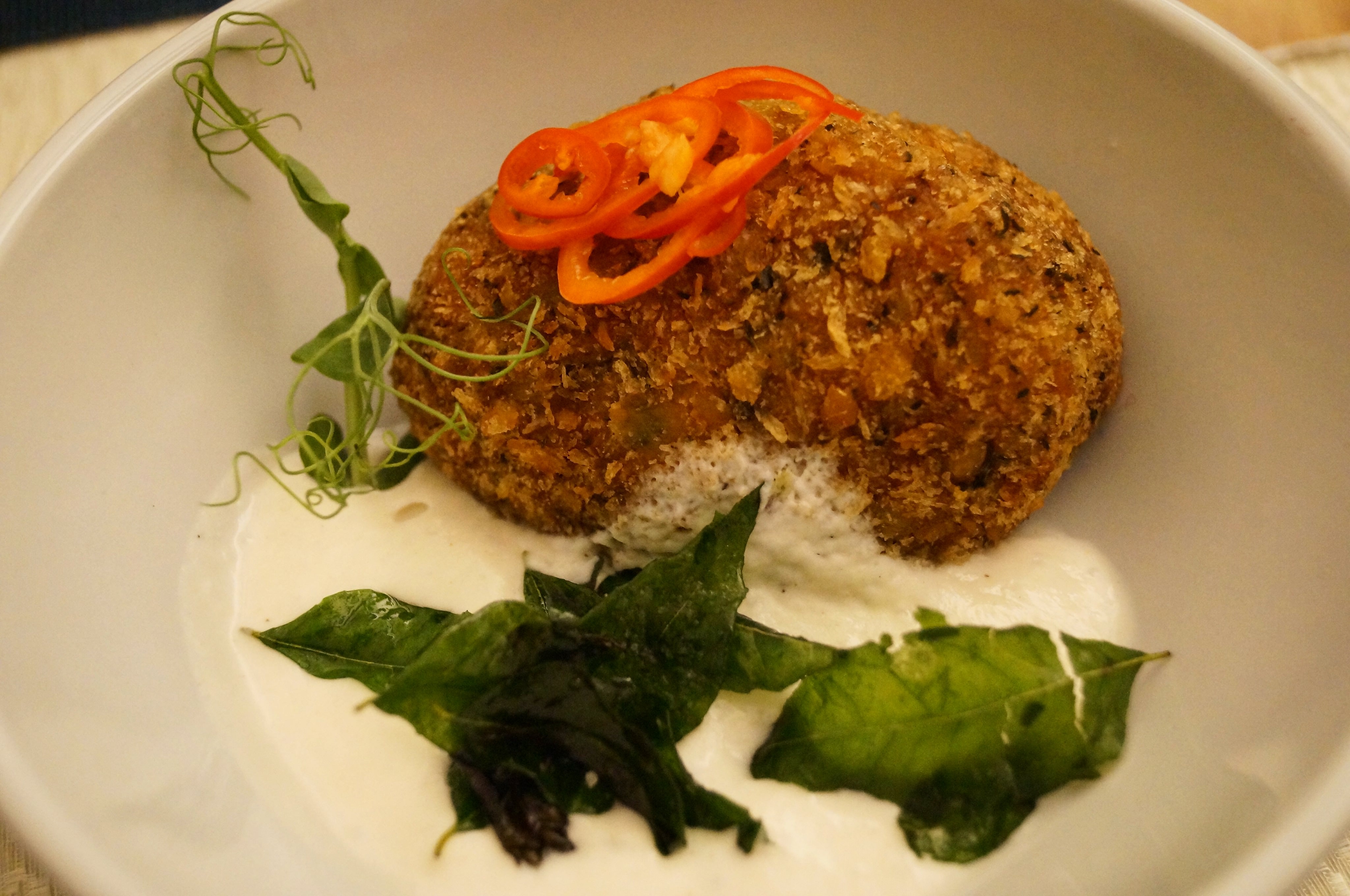 We were then served our next dish for the night – nyonya otah scotch eggs with coconut foam. Scotch eggs make sense in the context due to the overarching British influence and constitution in Singapore, and this fusion of a Western dish meets Eastern flavours worked surprisingly well. Pairing the strong flavours together on the plate seemed almost in response to how the unlikely onstage couple themselves came together, with the tastes of the well prepared nyonya otah scotch egg and coconut foam coming together and dancing on our tongues. 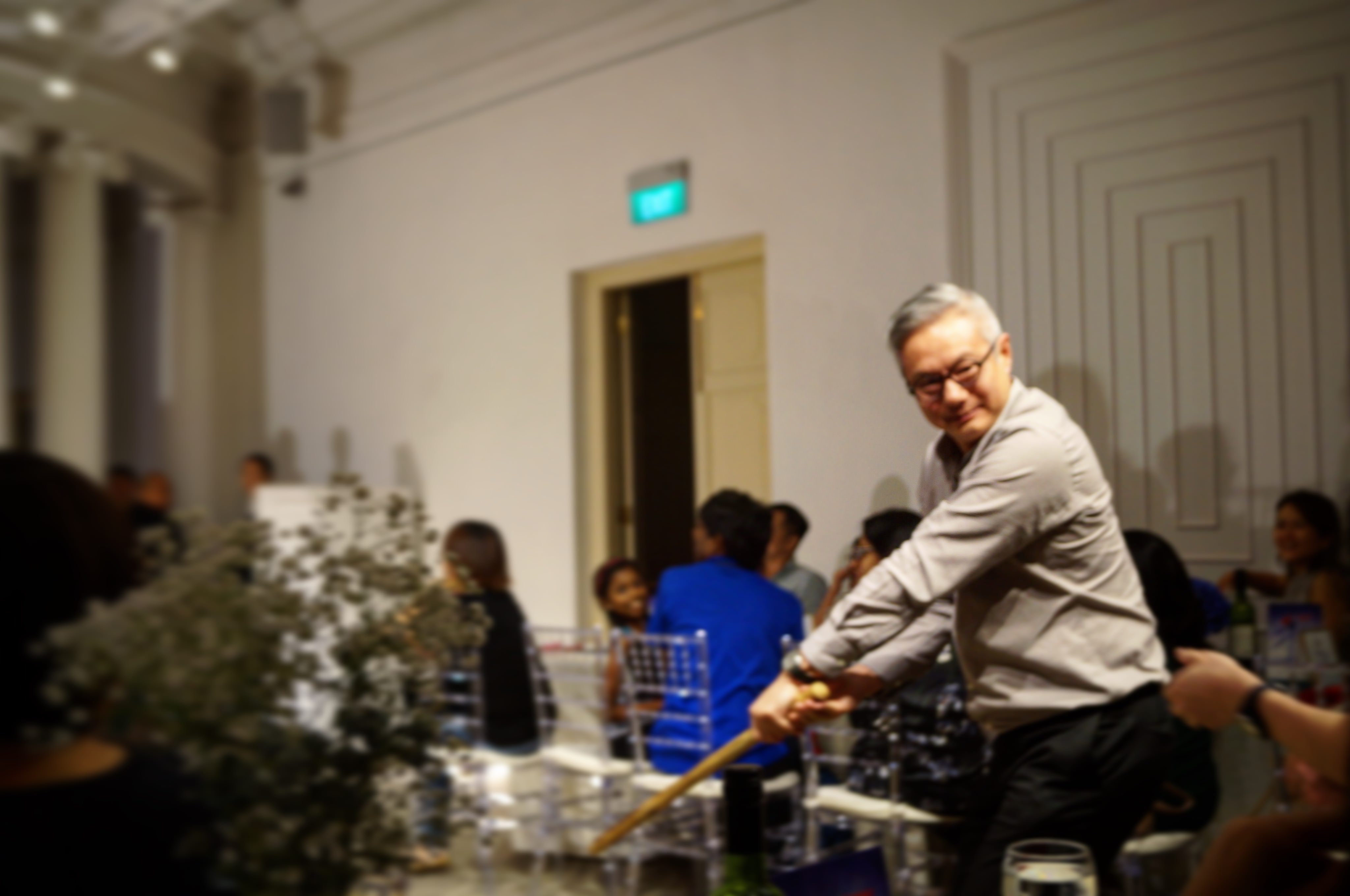 In the next segment, the scene depicted when the British surrendered to the Japanese, featuring an eerie arrangement of Louis Armstrong’s ‘What A Wonderful World’. Alvin physically tosses himself around the dance floor to represent his character being ‘tortured’, while audience members are then invited to ‘tekkan’ him as well. After having built up a bond with the characters onstage during the performance, it felt like a wrong choice to invite audience members onstage to perform such a distasteful act, and we wondered if there might have been a better way to encourage audience interaction instead. 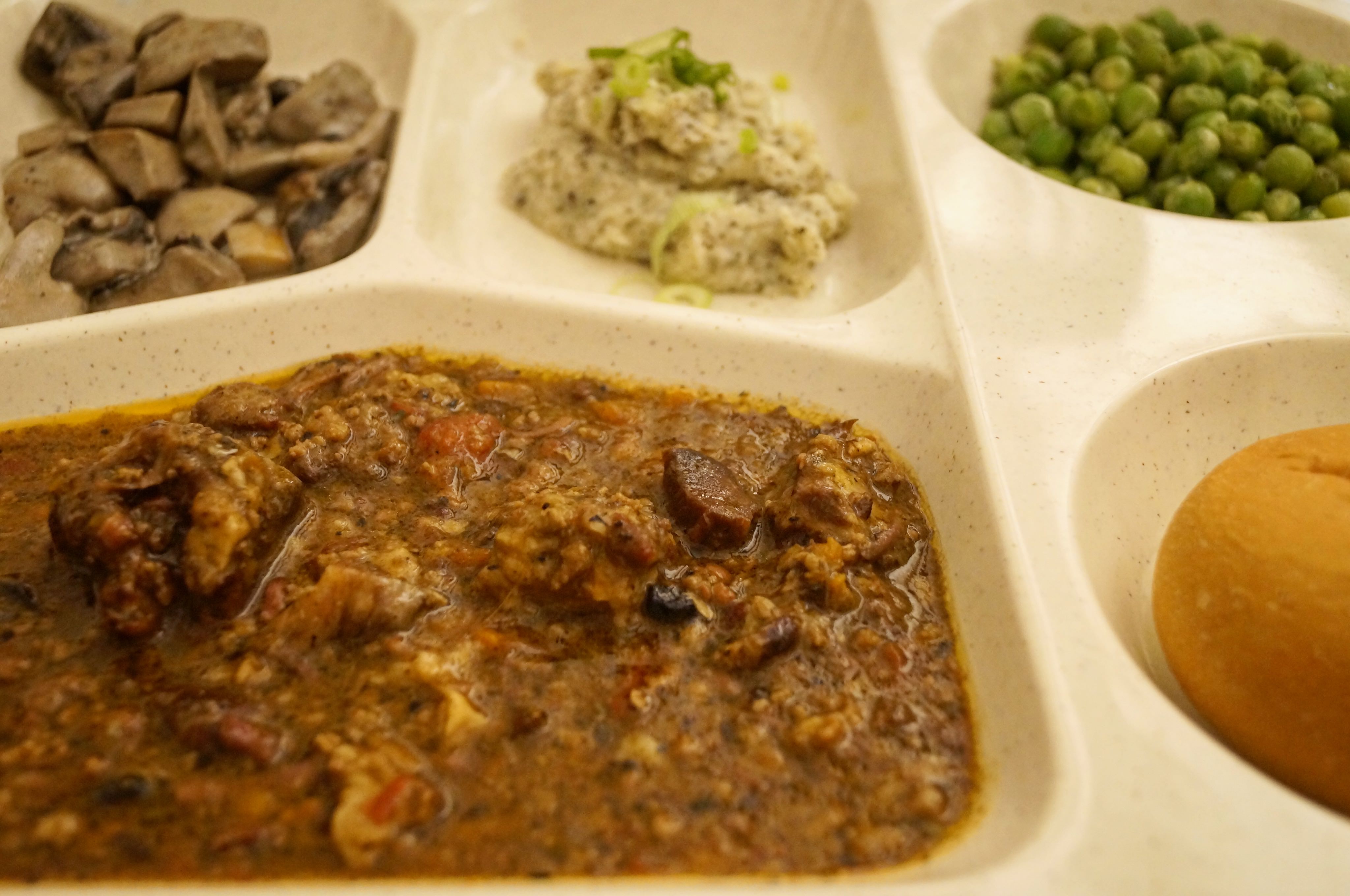 As Alvin was imprisoned for his role as a spy, we were then presented with our penultimate dish of the night, appropriately served in a simple tray that resembled a last meal. Meant to be the inmate’s favourite dish they would have before being sent to the gallows, for all its plain appearance, this was in fact a really well prepared meal. We were served a rich beef stew, sauteed mushrooms with cream (that still managed to retain the integrity of the mushroom’s texture), a smooth and delicious truffle mash and green peas with mint even the British would be proud of. 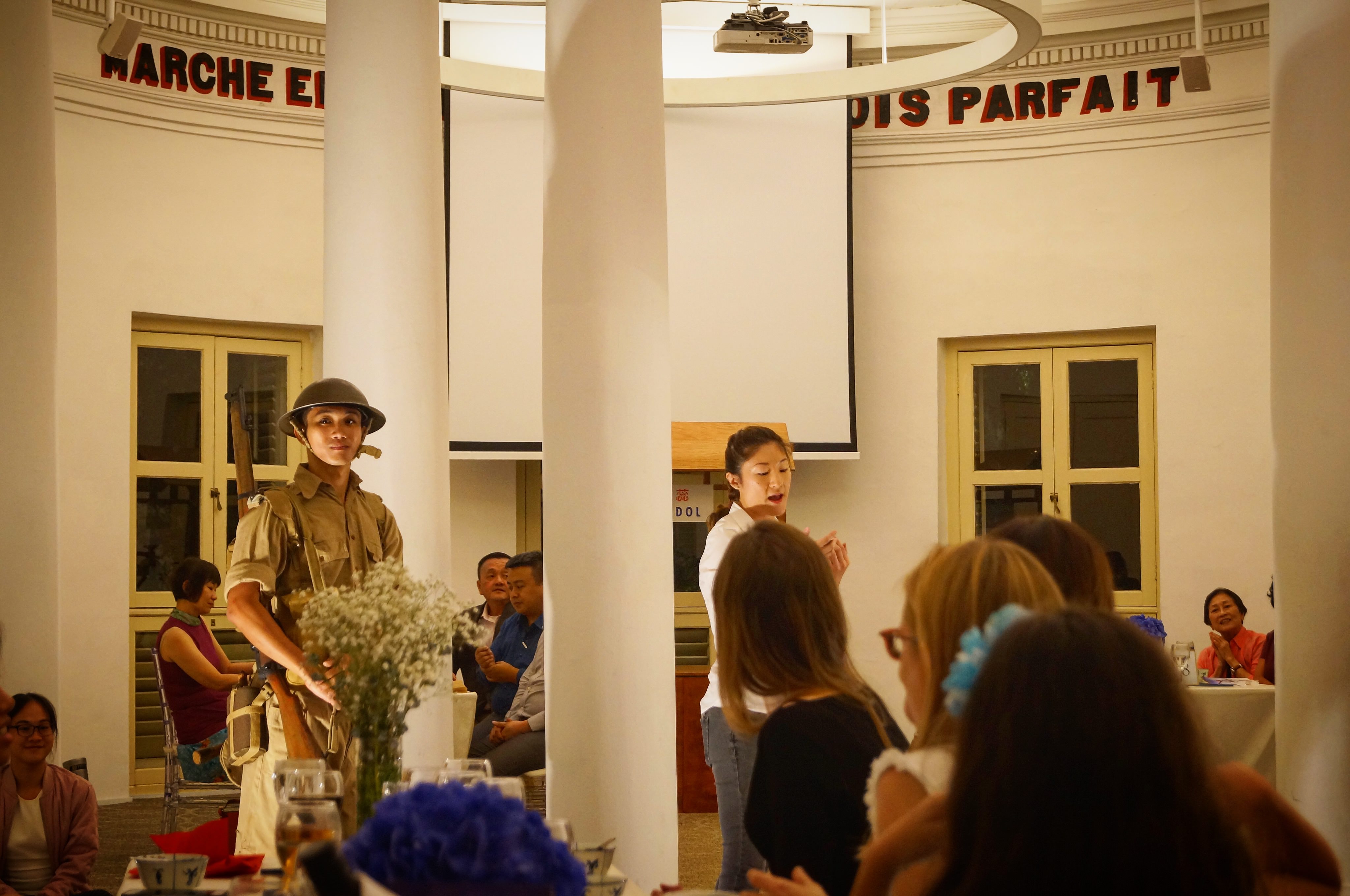 As the show drew to a close, we watch the onscreen visuals display the nuclear bombs falling upon Hiroshima, marking the end of the war as the Japanese surrendered at City Hall. While peace was finally upon Singapore, things would never be the same again. As we watched Natalie read a letter penned by the ‘satay man’, we see her eyes well up, her facial expression a pained combination of anguish, loss and sorrow as she wonders how she can move on from here, a sadness we feel emanating from her every movement. Ending on a poignant, sombre note, we were then left with the question: what would we say to our lost loved ones? 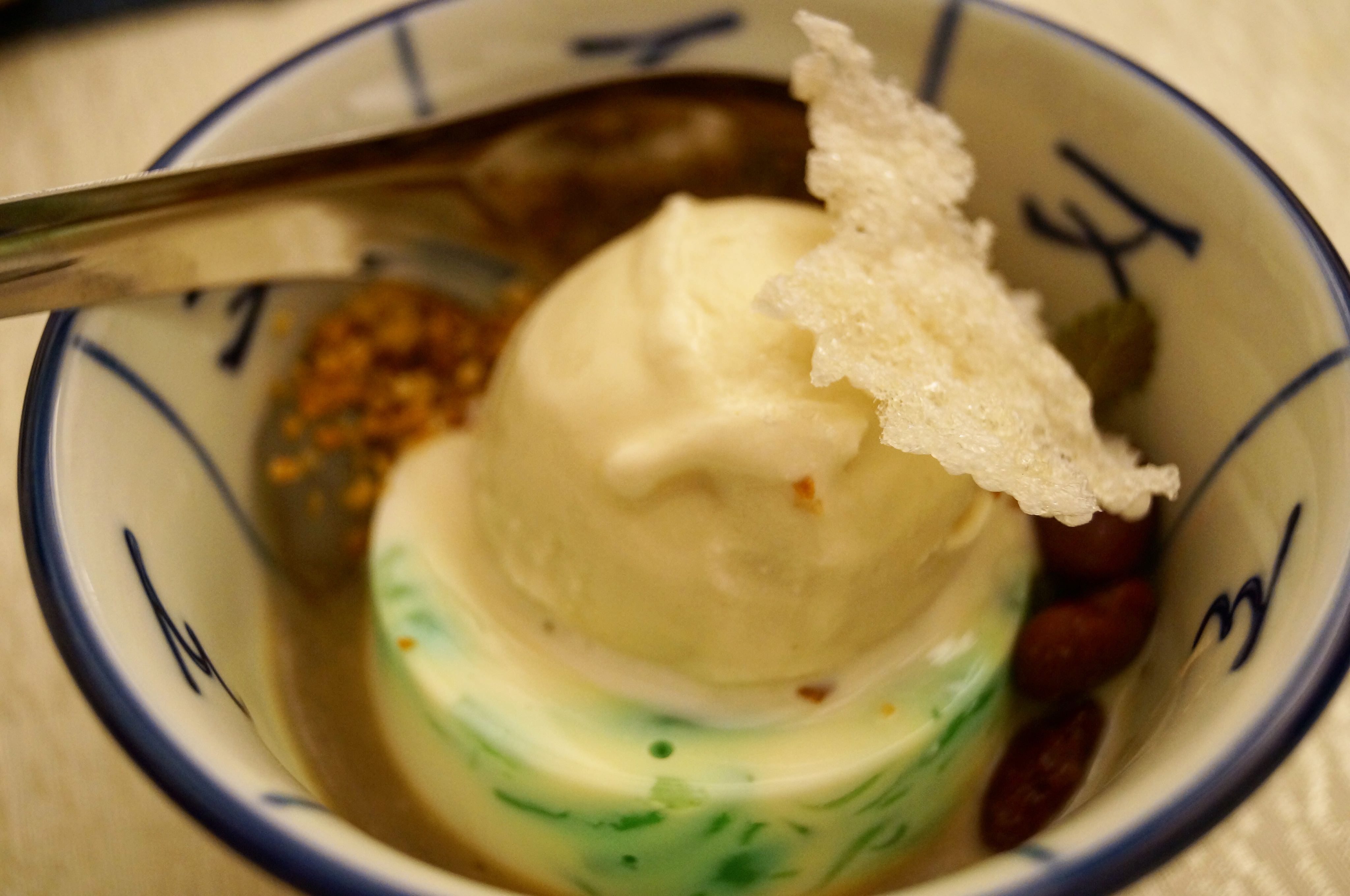 With such a heavy ending, it made sense to lighten the mood with a sweet dessert, comprising a chendol panna cotta with a gula melaka sauce, coconut cream ice cream, brown sugar toasted granolas and topped with a baked then fried lightly sago. A smart take on the traditional chendol dessert, this dish made for a satisfying and innovative finish to the entire meal with its complementary mix of flavours and textures. 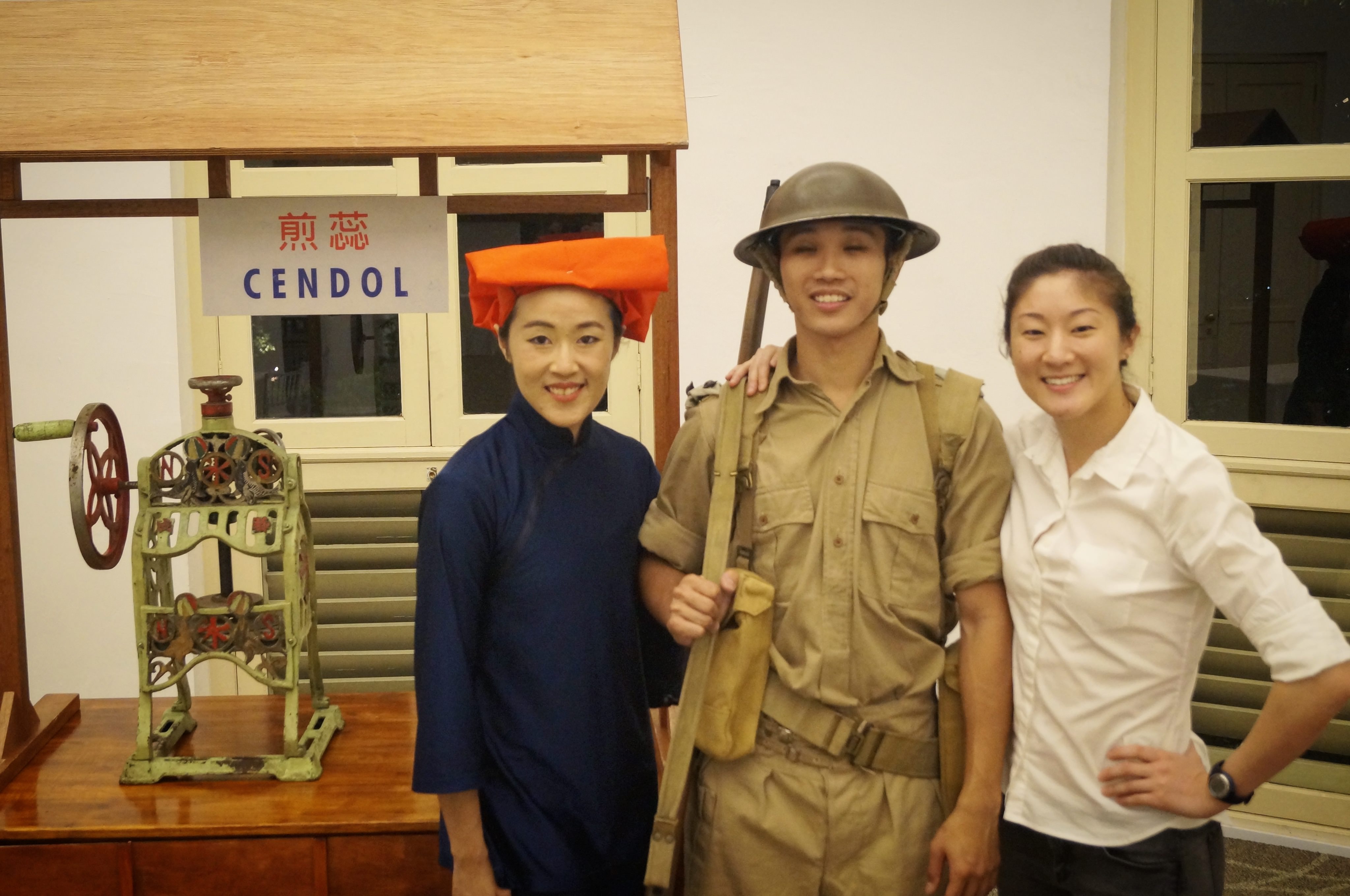 All in all, A Samsui Love Story was a slick, well-choreographed show that made full use of its storyline to bring out a full range of emotions. Choreographer Naomi Tan and Chef Nixon have forged a strong connection and understanding after years of working together, and it shows in how the menu matches up perfectly with the scenes at hand, feeling classy yet playful, innovative yet quintessentially Singaporean in its flavours. A Samsui Love Story is a prime example of immersive dining done right, with a creative streak that runs through both performance and menu, elegant execution and having crafted an experience we would be more than happy to return to in future.