GEORGE TOWN, MALAYSIA – Based off the experiences of soldiers who have fought on the frontline, KaBooM is a moving and often disturbing series of interlocking performance vignettes, as told by a single woman (Deborah Leiser-Moore, also director) performing each of these stories.

Registering and gathering at Art Lane before the performance began, we were then led a short distance away to a steel factory where the performance would be held. As a piece of site specific theatre, the slightly run down building seemed like the perfect location to stage a piece about the horrors of war, with bits of steel and shrapnel lying around in an organised, deliberate looking mess, while gravel on the floor crunched underfoot, giving us the real sense that we were walking on wartorn battlegrounds. 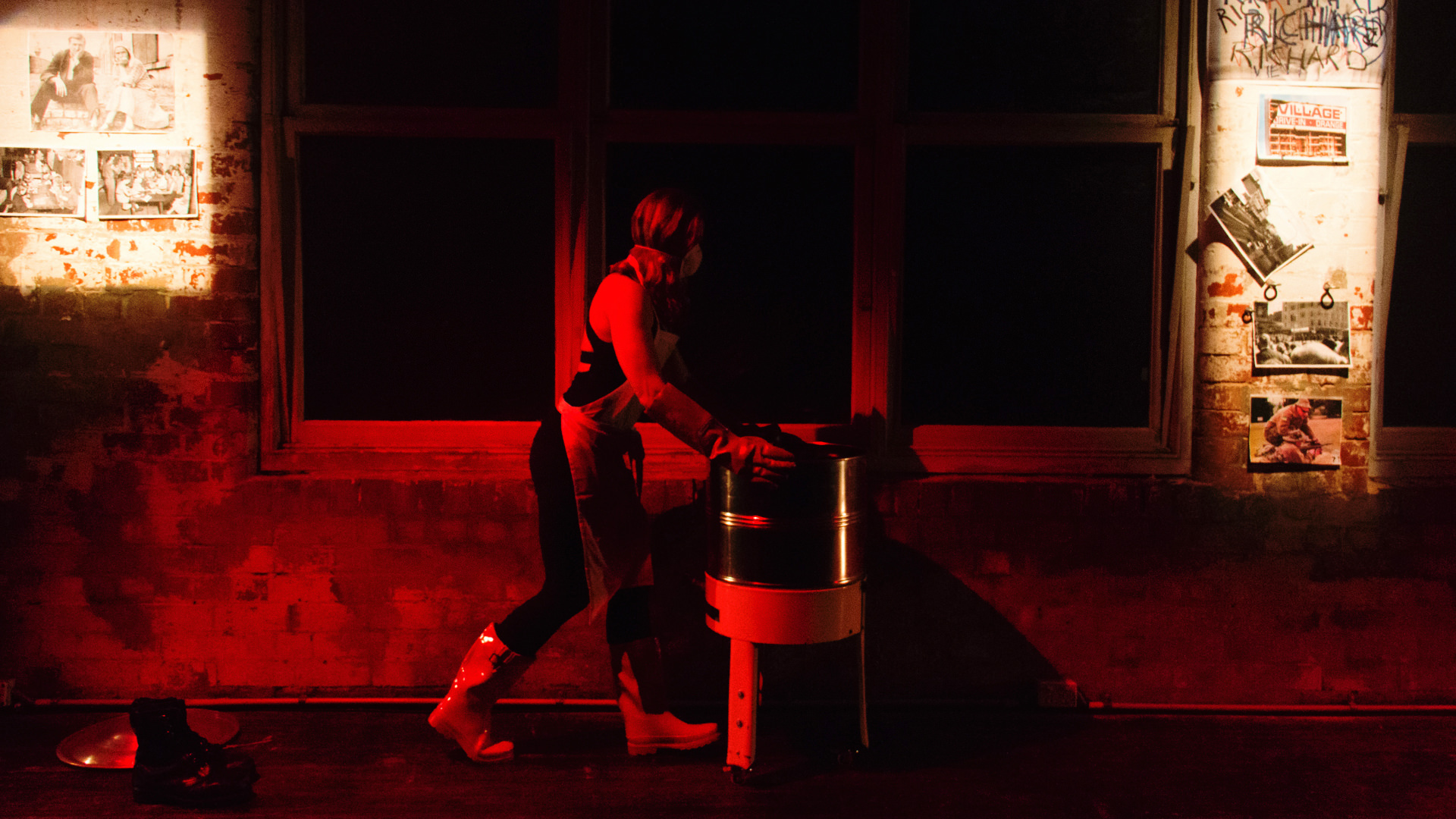 The performance opened with a projection of words giving audiences an insight into what the show would be about, before we walked into a room resembling a war torn bunker. Here, we watched a video projection to display war footage narrated by a male voice recalling the memory of war, while our sole actress emerged to give us her interpretation of the war, hugging and caressing a ‘corpse’. With tears in her eyes, one then realises that she is a loved one this male narrator had left behind after falling in war, and there was a spooky sense of something deathly real about it all, especially when he was recounting being shot at, where he describes the heat and the searing pain felt throughout his arms before blood gushes out. The performer then reveals a razor, attempting to cut herself free from this plastic cocoon, but does so seething with anger, pain and rage. 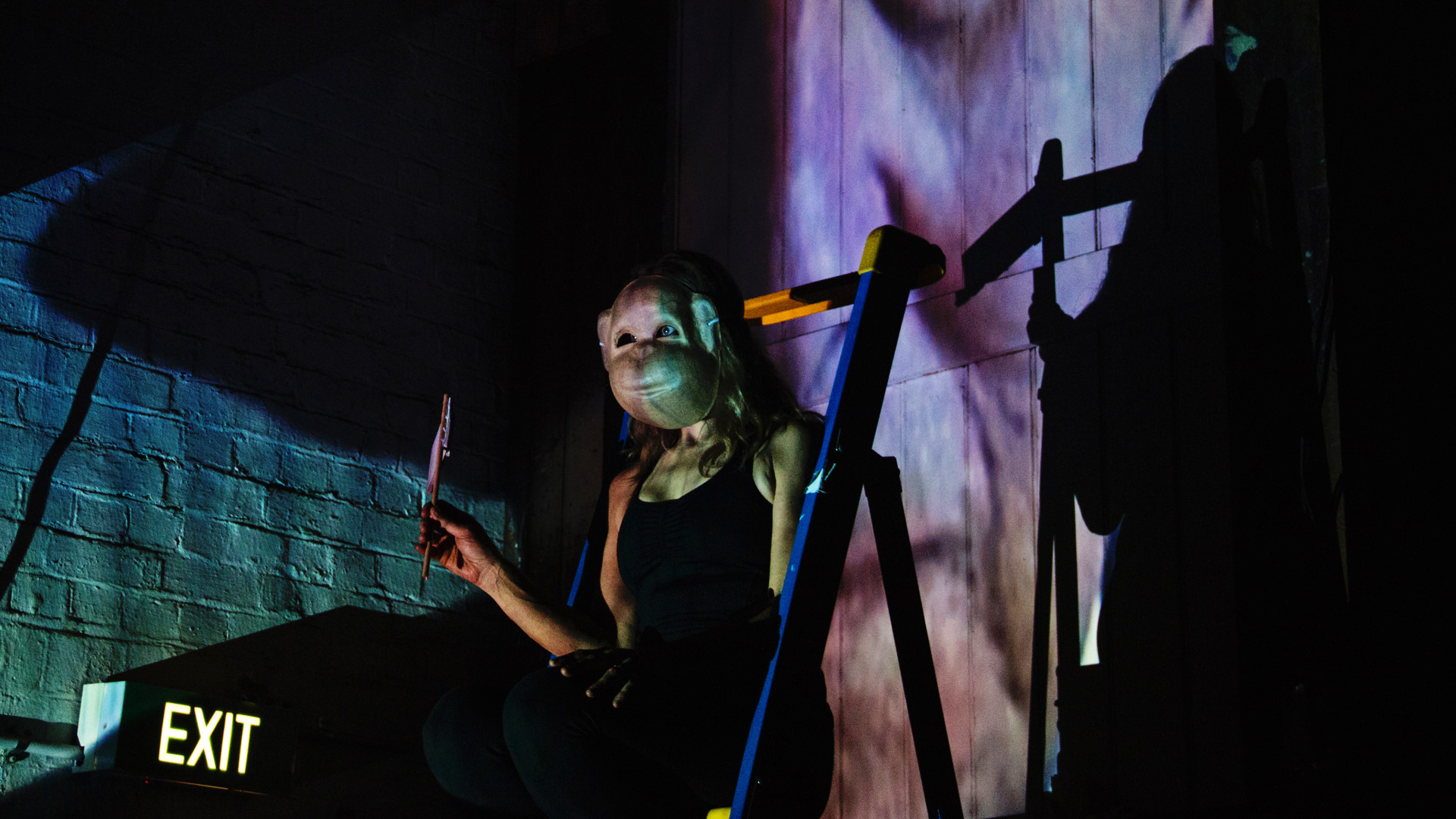 We are then introduced to a woman who appears to be in an apron resembling a doctor, or more sinisterly, one who handles body in a morgue, almost as if she is attempting to avoid infection from the dead bodies. Filling a bucket with different pairs of shoes, each representing a single body, one thinks of body disposal methods and how much people lose their humanity in death, before she begins arranging these shoes in a path, leading us to the next room. Here, we are introduced to Ivor, a survivor who is continually haunted by survivor’s guilt over his friend’s death, emphasised by the soundscape and the visuals. Having fought in the war for Australia, it was was apt then that the scene ended with an unfurling of the Australian flag in the air, reminding one of the Australian national anthem “Advance Australia Fair”.

The woman returns in the next scene with her bucket of shoes, this time scaling a wall with a rope. Displaying the shoes on the wall, it almost transforms it into an altar to remember the dead by. We are then led upstairs to another room, with a completely different atmosphere. Here, a woman sits at the dining table alone eating, while a television in the background morbidly plays footage of citizens dying. Going to the bathroom to fetch a pail of water, she turns her attention to the utensils before crying. As an audience member, one feels her pain and distress, a war widow grieving for her dead husband. We are then led to the bathroom, far more airy, and was less of a performance than an exhibition, with phrases projected on the screen like Killer Instinct, Two Dead Birds, Opening old wounds, shotgun wedding, words that seem to be magnified in meaning and impact through the lens of war.

In the final, provocative scene, an army of silhouettes of what feel like ghosts appears on a plastic sheet, and one is reminded of wayang kulit style shadow puppetry. Hearing an explosion, water is then splashed onto the sheet while red light is projected onto it, looking as if blood is being spilled all over,  leaving only a single survivor. Yet even in life, this single survivor cannot escape the horrors of war, literally dragged down by the dead ‘souls’ into the depths of hell. Eventually managing to escape, she crawls to the front of the scene, scattering gravel and other reminders of war torn items to resemble a fallout zone, following an explosion (displayed on the plastic screen) She is visibly traumatised, and explaining her story, puts everything into perspective.

With the doctor-figure returning for one last time, one notices a change to the shoes she’s carrying: in each one there is a light, a light of hope and safety as she leads the audiences out on this newly illuminated path, in spite of the sorrow and pain associated with it. KaBooM uses a combination of visceral imagery, thorough research and the sheer discomfort and atmosphere of the site-specific location to bring audiences on a haunting journey through the darkest, most mind-numbingly horrific aspects of war, leaving one sweating and emotionally battered by the end of the performance, with plenty to reflect on on the way home.