Brilliant, emotive violin playing backed up by a worthy orchestra makes for a stunning concert.

There’s a saying that of all the instruments, it is the violin that best represents and resembles the human speaking voice. When an expert violinist takes to the stage then, one can only expect a performance that moves with its humanity, and its ability to produce music that comes alive with a singular, unique spirituality.

It’s no surprise then that critically-acclaimed, Grammy Award-winning violinist Joshua Bell does all that and more, particularly when backed up by the Singapore Chinese Orchestra (SCO). Last seen in Singapore in 2016, also playing with his ‘new favourite orchestra’, Joshua Bell returned last week to play with the orchestra in a public performance at the Esplanade Concert Hall and in a private, invite only concert at the Singapore Conference Hall.

Conducted by SCO Music Director Tsung Yeh, the concert opened with a strong start, with the SCO performing Tan Dun’s ‘Yellow Earth’, a high energy introduction with their shouts of determination as they brought to the stage the lives of the folks living on the Huangtu Plateau through their music. One is introduced to the astounding acoustics of the Singapore Conference Hall, a perfect venue to showcase Chinese Orchestra music at its most optimal with a unique structure that allows sound to reverberate upwards and for every audience member to take in the entire experience. 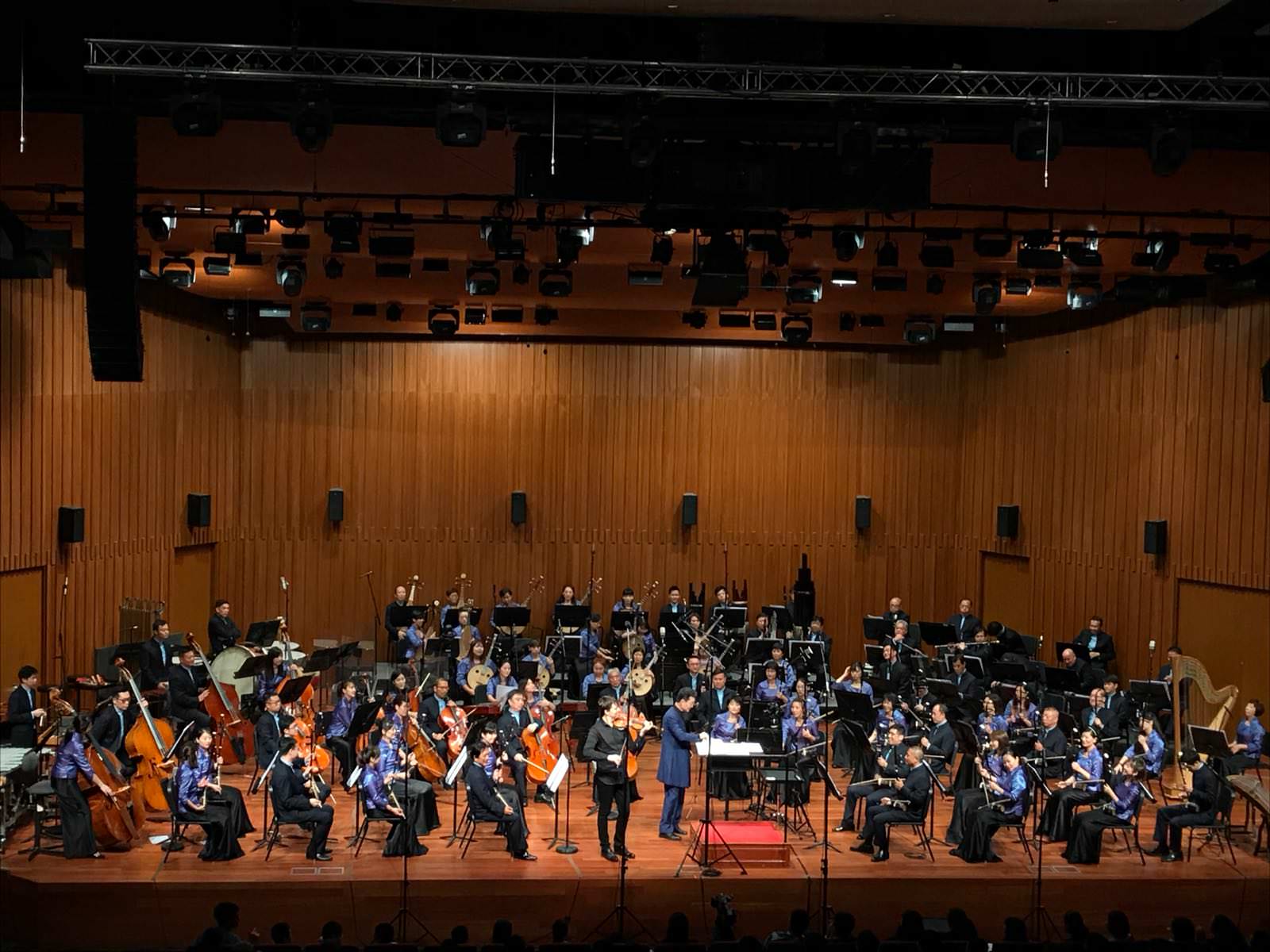 By now, the audience was all warmed up and eagerly anticipating Joshua Bell’s appearance, their excitement translating into fervent applause as he walked confidently, charmingly onstage to perform Camille Saint-Saens’ ‘Introduction et Rondeo Capriccioso, Op. 28′. While initially poised as a violin ‘solo’, showing off the crisp and precise playing style associated with Bell as he nimbly reached impossibly high notes, the orchestra eventually enters subtly, coming in to support Bell’s playing. Conductor Tsung Yeh here displays strong leadership in keeping an eye on every section, including Bell himself to ensure quality performances from each musician. One feels as if there is a constant conversation between Bell and the orchestra, a sublime performance that offers strength and support to each other and shows off their skills and repertoire. 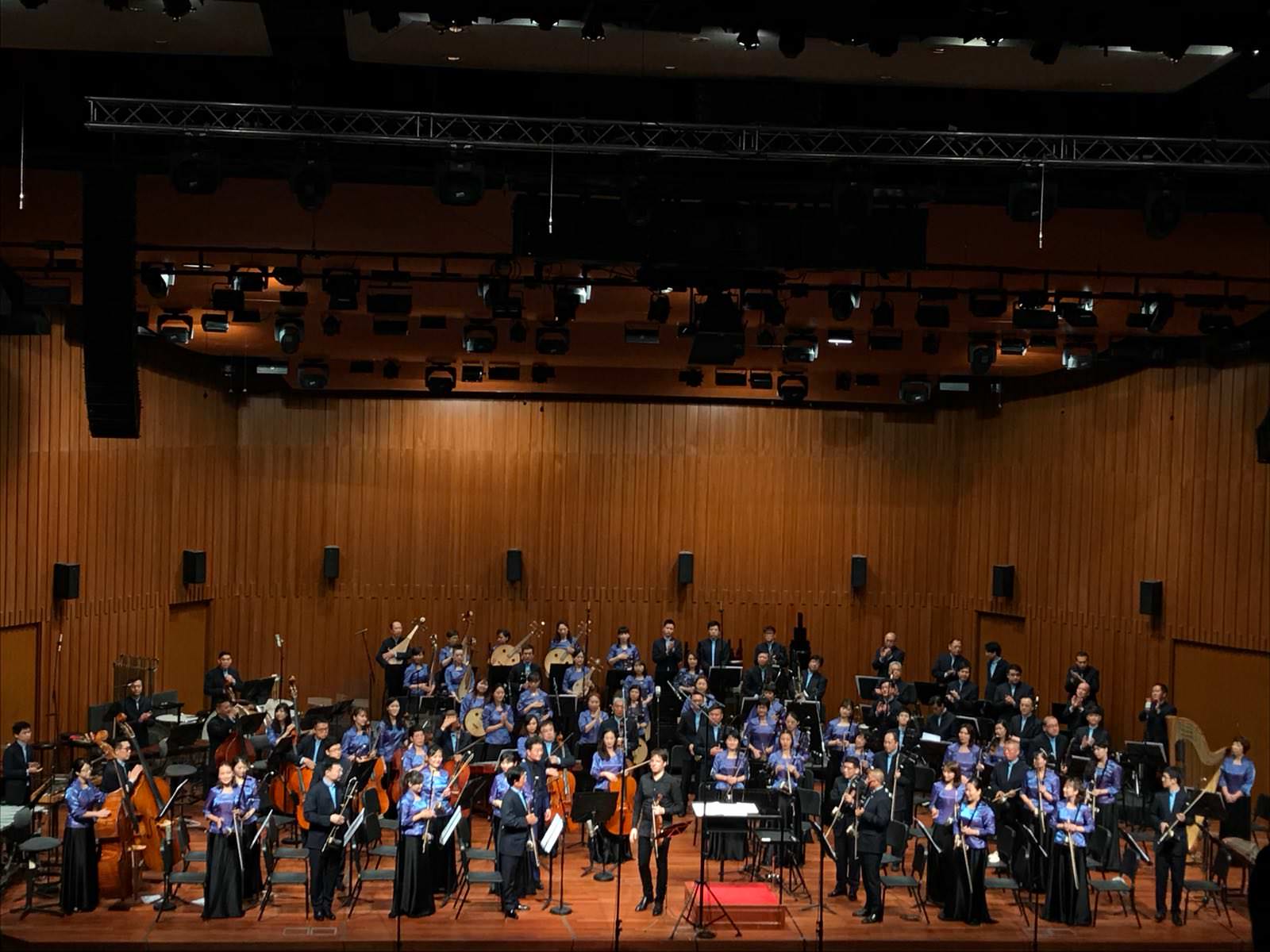 Throughout the night, violin and orchestra worked in tandem, syncing up and allowing each other the space to shine in every piece. With Jules Massenet’s ‘Thais: Meditation’, Bell’s playing immediately lulls audiences into a state of ease, allowing the music to waft and wash over them with pure emotion,  portraying a shift from earthly hedonism to devotion to religious purity. In stark contrast, Bell then moves into the final piece of the first half, Sarasate’s ‘Zigeunerweisen (Gypsy Airs), Op. 20′ (adapted by Law Wai Lun). The familiar piece opens with the orchestra tackling the fast-paced gypsy melodies before Bell enters to play rapid pizzicatos and sharp high notes, holding his bow with finesse as almost trance-like as he plucks away at the strings. Moving deftly from movement to movement, Bell and the orchestra display strong chemistry as they work together to bring the work to new heights with their combined efforts. 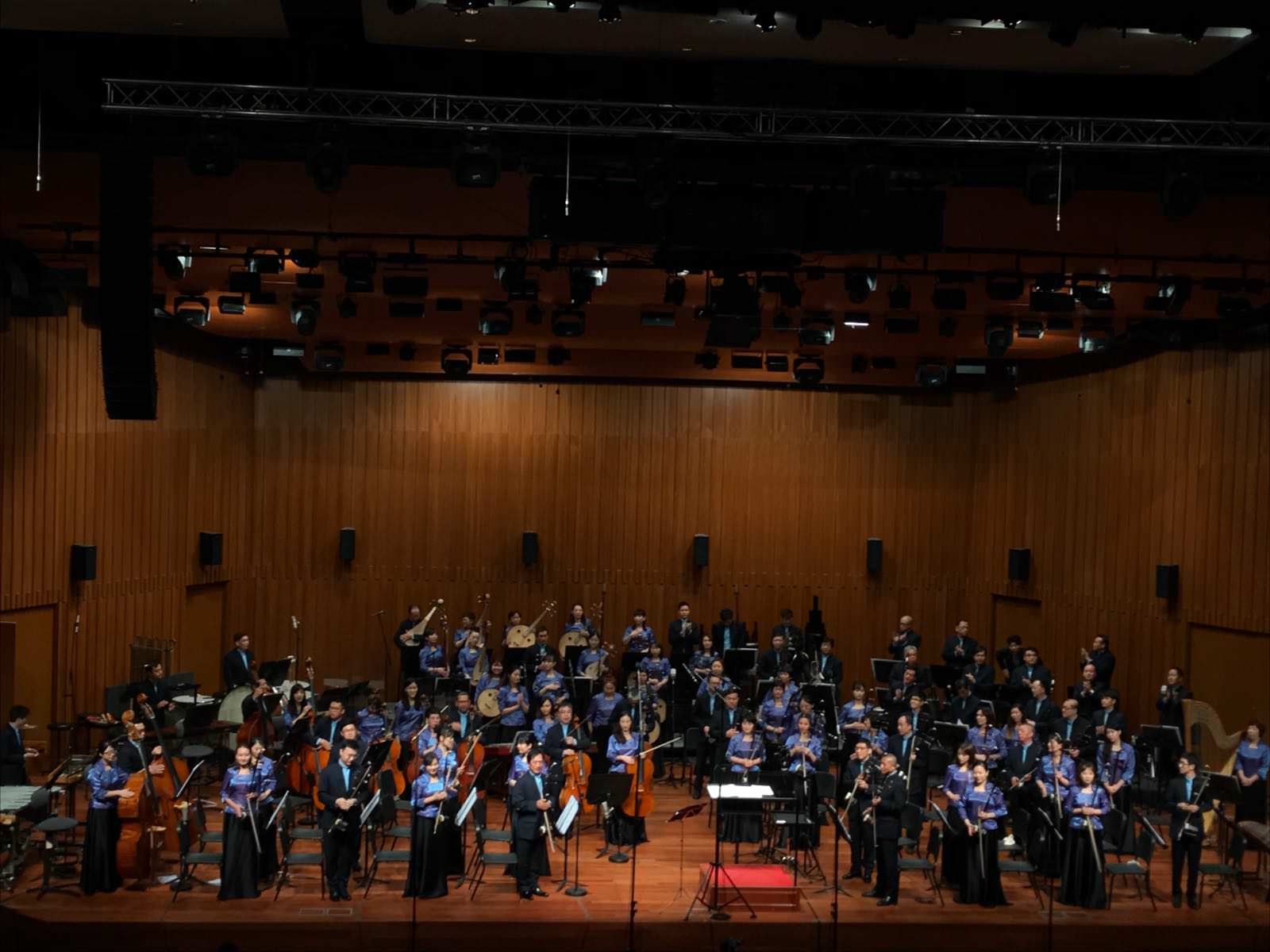 After a brief intermission, the orchestra was given a chance once again to show off the full extent of their capabilities and prepare audiences for the latter half of the evening. Playing the grandiose first movement of Guo Wen Jing’s ‘Dianxi Folk Tunes’. one can practically imagine the Va people depicted in the song going through the trials and tribulations of climbing a treacherous mountain. One is filled with trepidation as one sees the hardships they go through, with the orchestra playing clashing notes that included many sharps and naturals, almost as if countless Va people had fallen along the way up. By the end of the piece, one is filled with a sense of uneasy relief as the villagers finally reach the summit, filled with suspenseful notes from the erhu as they figure out how to rebuild their lives again from scratch. 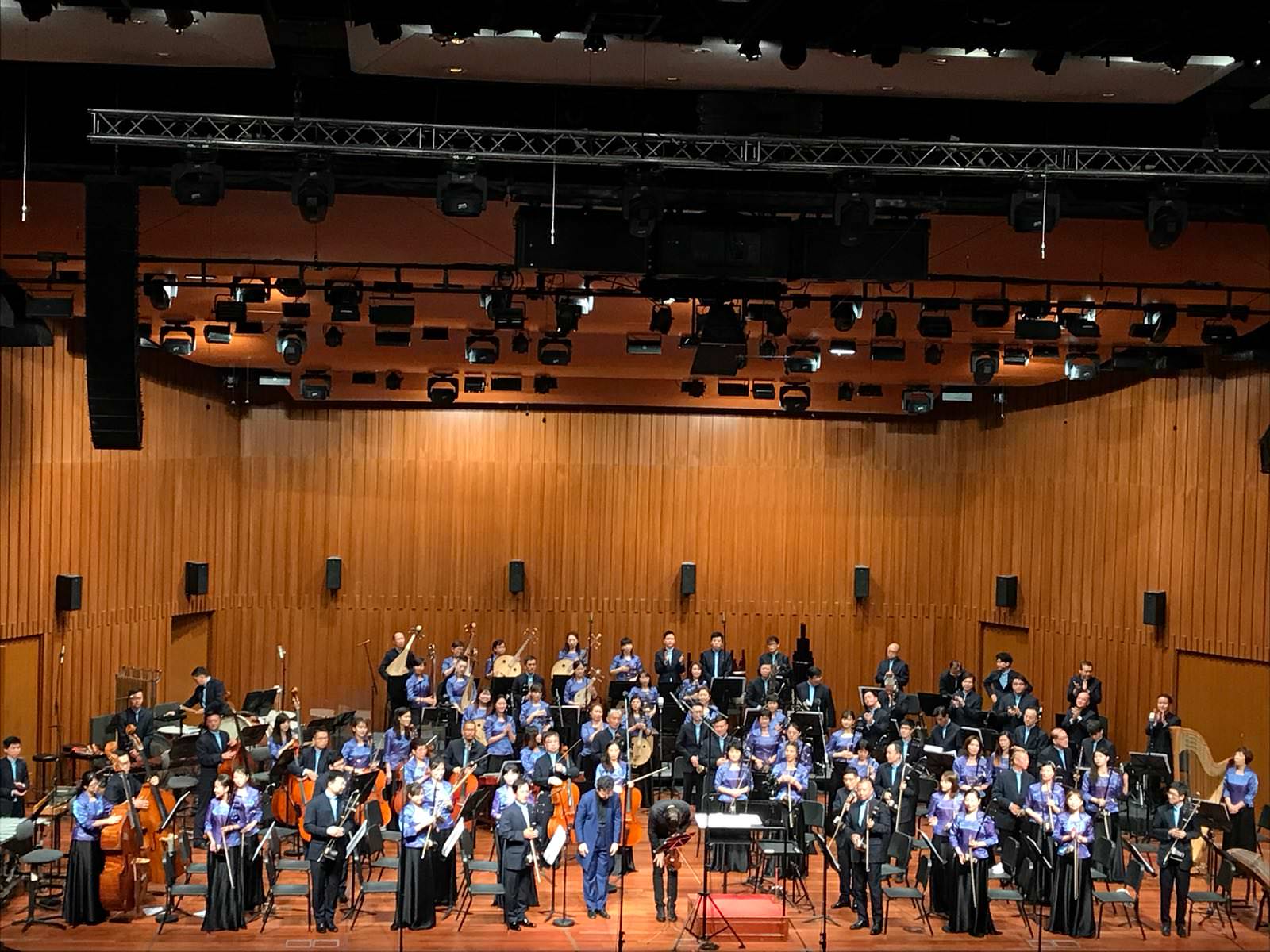 Finally, the concert ended off with the much anticipated pièce de résistance: ‘The Butterfly Lovers’. The highlight of the concert and also the longest, ‘The Butterfly Lovers’ violin concerto brings the classic Chinese romance of star-crossed lovers to life. When the piece begins, it sounds almost as if one hears tiny wingbeats of butterflies fluttering in a verdant green paradise, each note building into a vivid aural image, such as the flutes bringing out a melodious mimicry of the wind. In a sense, conductor Tsung Yeh is almost ensuring that the butterflies are on the right path, as Bell’s playing is in perfect harmony with the rousing orchestra, both getting equal limelight and sharing strong chemistry onstage.

One can practically hear the laughter and joy emanating from the lovers as the violins, erhus, flutes and trumpets come together, while the mood abruptly shifts to a far stormier one as the timpanis emerge in the second half. As Bell performs a countermelody to the cellos, one can almost hear the conversation between lovers as each laments their cruel fates and untimely separation. But there is a note of hope at the end as the flutes and guzhengs return to bring the scene back to the beginning notes of paradise: both lovers have died and become butterflies, fated to be together forever as they start life anew in a heavenly afterlife.

For Joshua Bell to come in to play with the SCO truly shows how much dedication there is towards understanding each other, with Tsung Yeh at the forefront galvanising the entire performance into what it is, showing off his leadership in being able to manage these varied instruments while bringing out the best of all of them. As such a renowned performer, Bell could easily have taken the spotlight for himself, but instead chooses to work collaboratively with the SCO and harmonising their sound. This was a concert that allowed Bell to fully show off his renown as a modern violin maestro at his finest, but only with the keen support and understanding granted from the brilliant SCO, showing just how much respect each has for the other to elevate them to the next level.

Joshua Bell and SCO: Butterfly Lovers played at the Esplanade Concert Hall on 30th August 2018, and the Singapore Conference Hall on 31st August 2018. His 31st August performance is set to be released by Sony in 2019. For the full SCO 2018/19 season, visit their website here