Bullying comes in all forms, and at times, in the most surprising of ways.

Far too often, it is children and teenagers who are crueler than adults, not realising the extent of their actions done ‘because it’s fun’. New theatre company The Fool Theatre (TFT) debuts onto our local scene with a brand new, original play that tackles precisely this issue, as the dangers and difficulties of dealing with bullying are brought into the light. 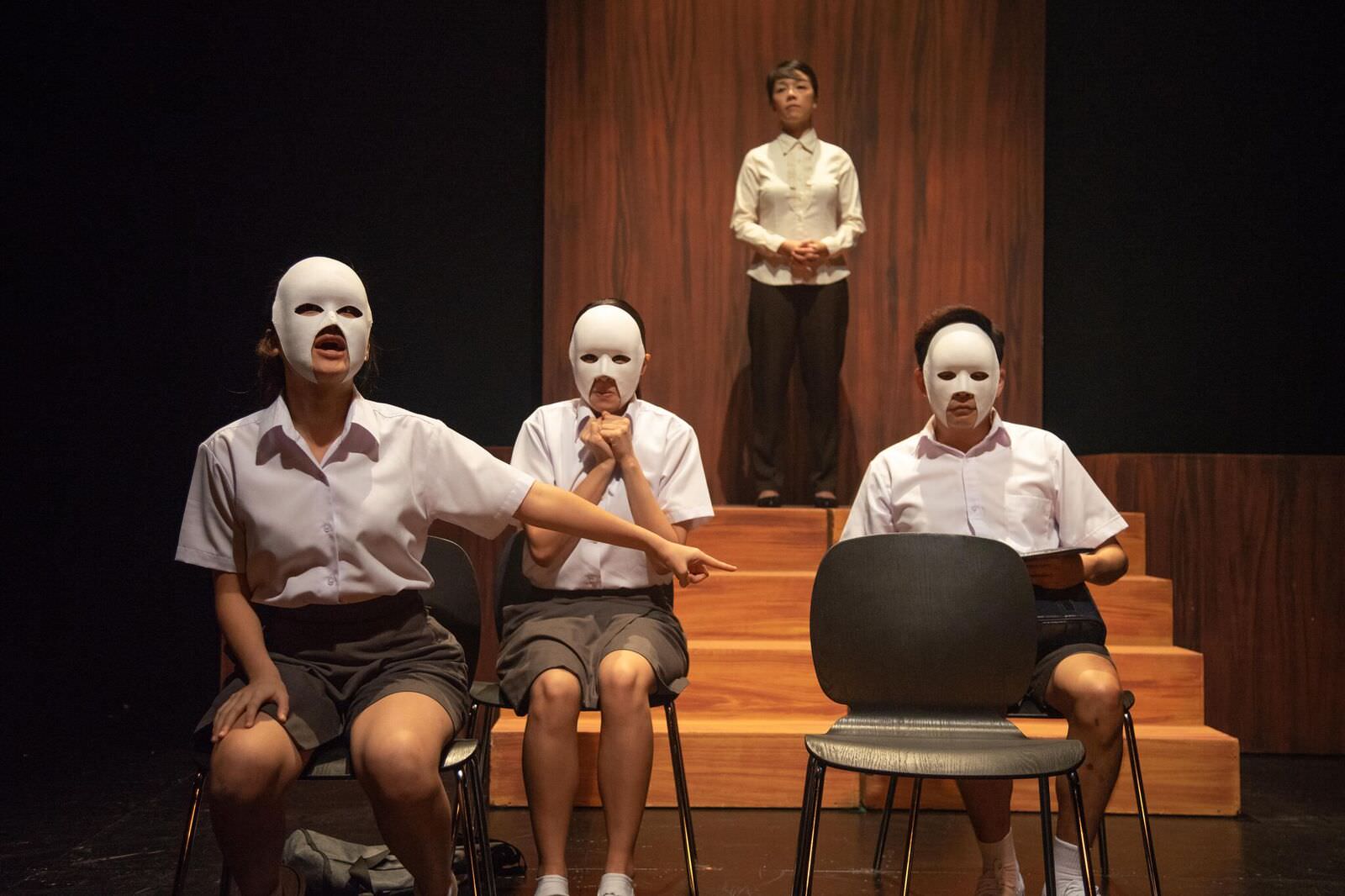 Written by Tung Ka Wai and directed by Xavier Kang (both co-founders of TFT), Because It’s Fun is set in a typical Singaporean secondary school, focusing on a class led by Chinese teacher Ms Lim (Audrey Luo). Things get tricky when the class troublemaker Weicheng (Terry Tan) is the sole witness to an accident where fellow classmate Jasmine (Pearl Hoo) falls from the school rooftop, and Ms Lim becomes the only one who seems to believe in Weicheng’s innocence, as the rest of the students, parents and even principal (Abby Lai) begin to spread malicious rumours and paint him as guilty. 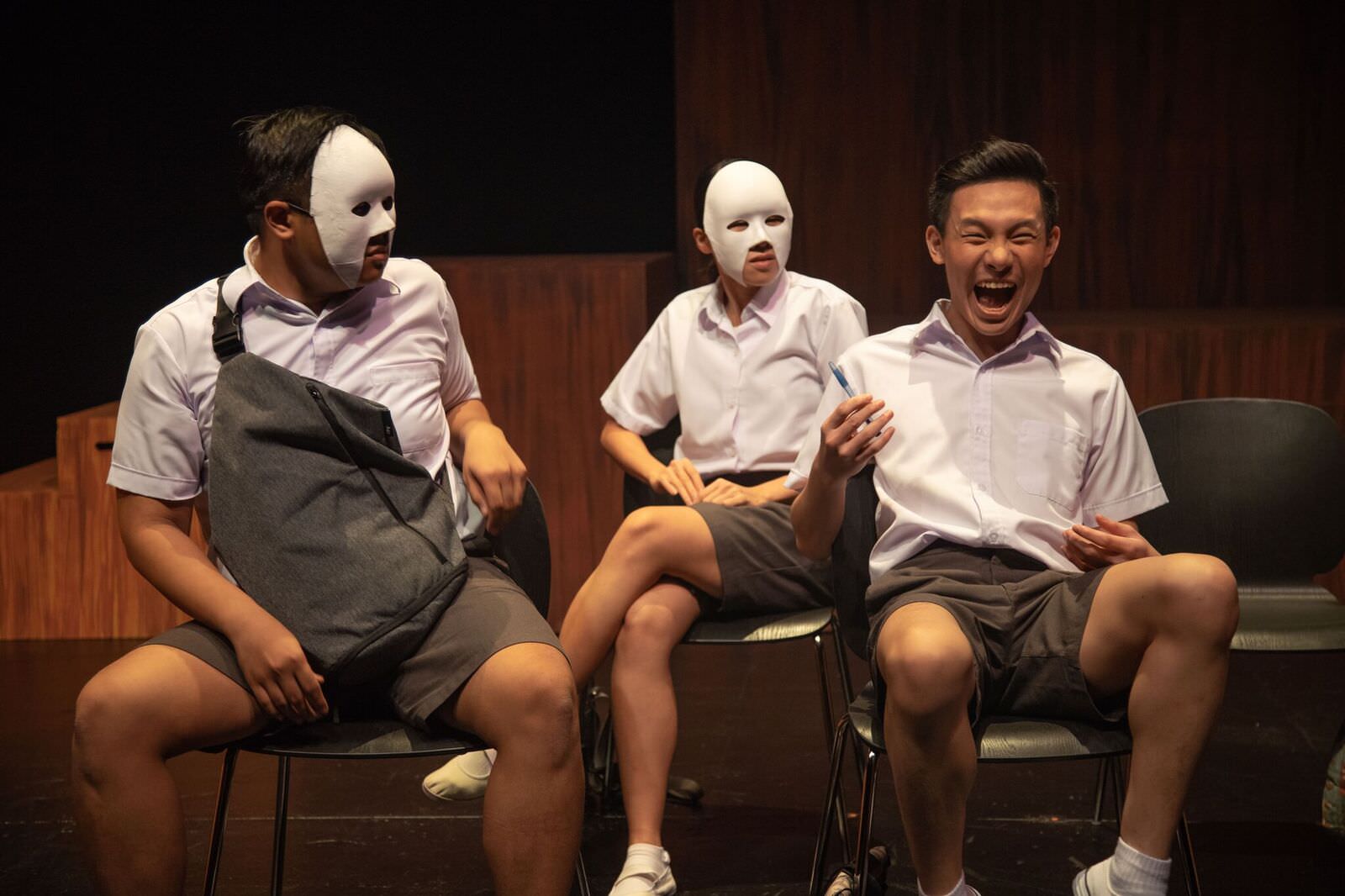 While at times feeling like it tries to achieve too much with a simple, familiar storyline, there are various elements of Because It’s Fun that keep it watchable throughout its duration. Throughout Because It’s Fun, Xavier Kang adopts different styles to portray various scenes. Characters open the performance with definitions of their titles and positions as students and teachers, highlighting the hierarchy and labels we put on ourselves that serve only to divide. 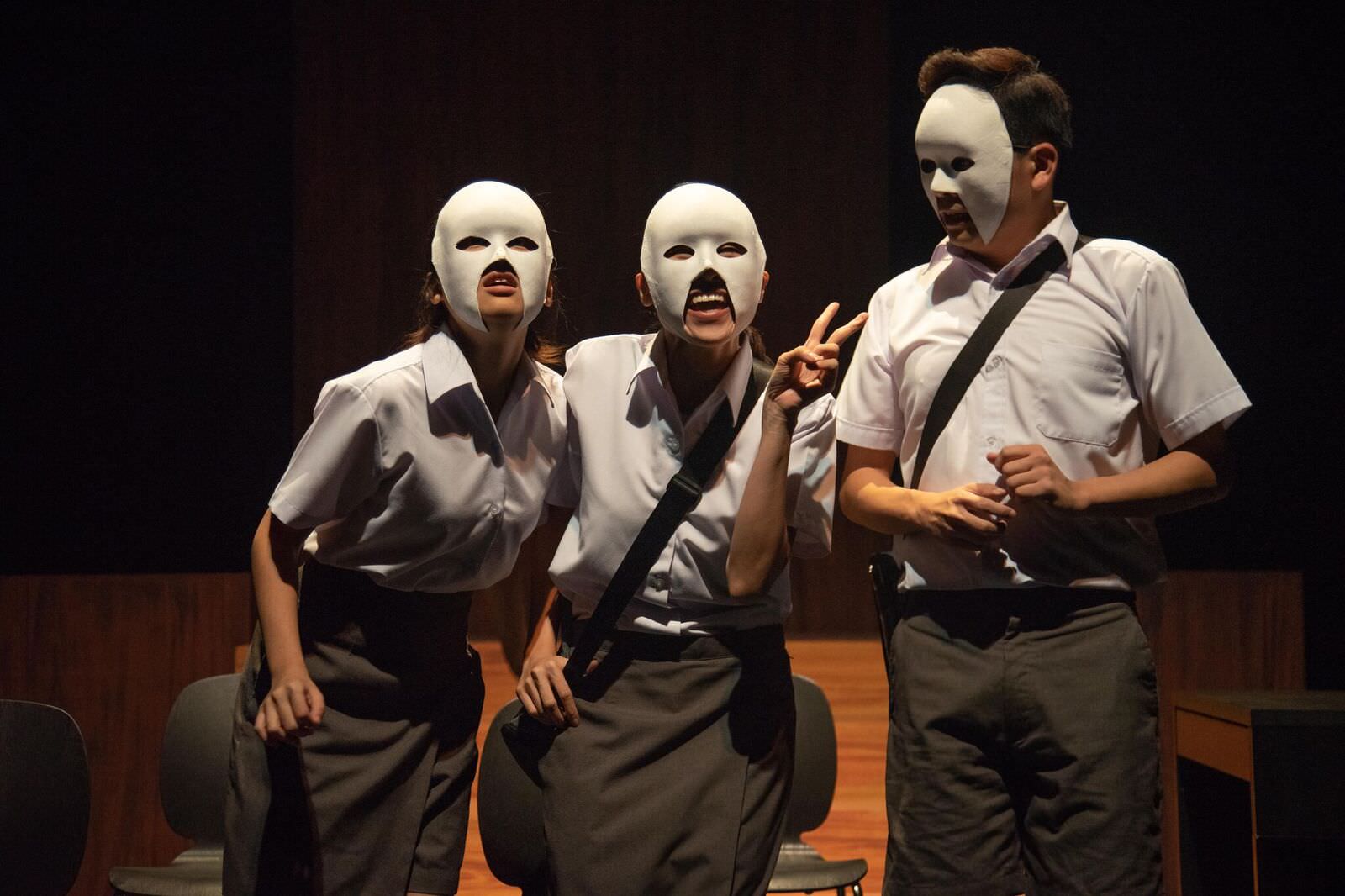 Meanwhile Weicheng and Jasmine’s classmates are always portrayed as anonymous figures, donning full face masks that obscure that identities and add a chilling sense of the sinister to their ‘playful’ laughter and jokes. One particularly enjoyed how these sequences allowed the actors to perform more exaggerated, stylised roles, breaking from the otherwise naturalistic style seen throughout the play. At the same time, these masks are representative of the ones we put on each day, as we hide our true intentions beneath a veneer of play. 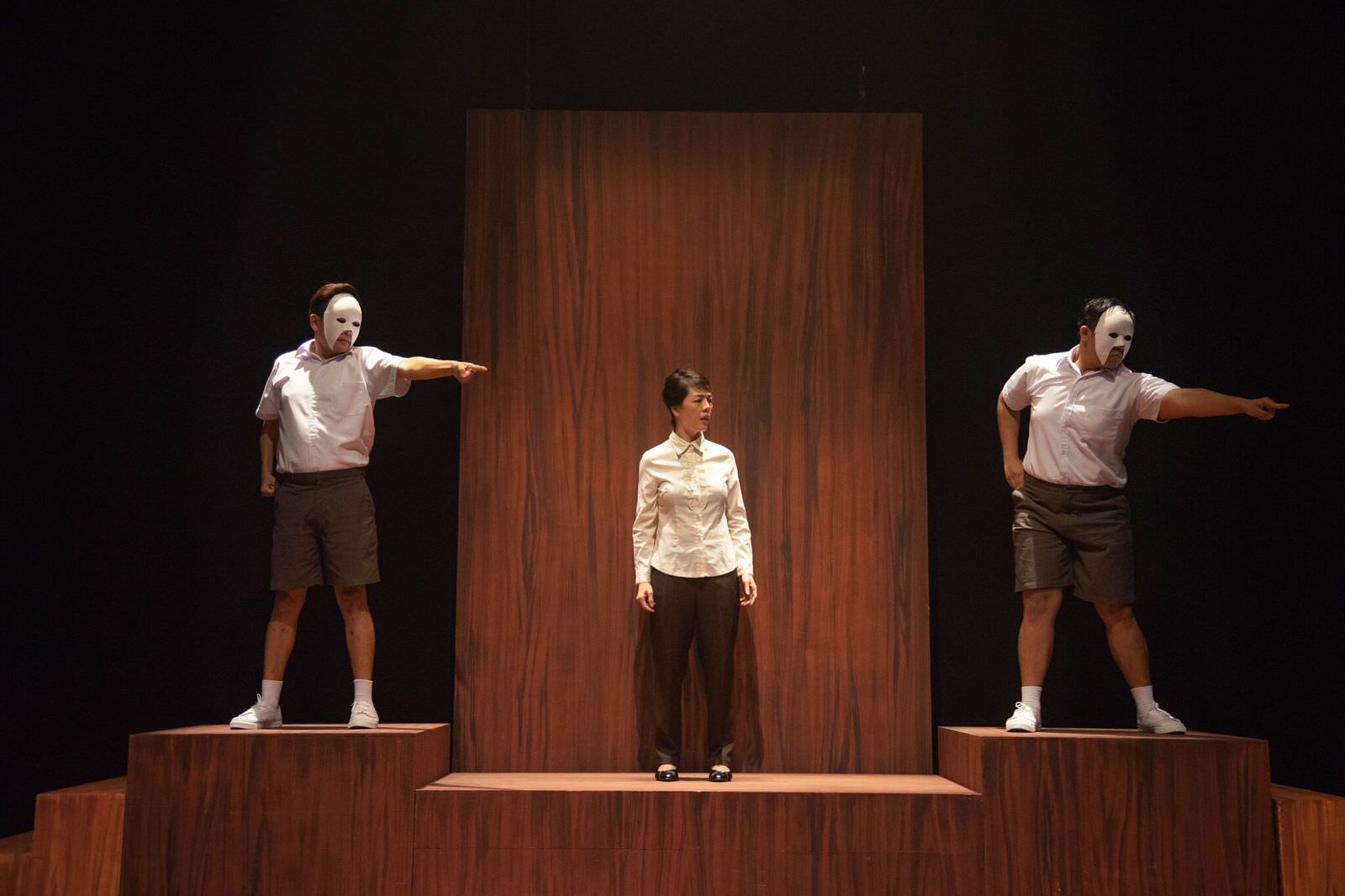 With an imposing wooden set by Petrina Dawn Tan, Because It’s Fun feels more like a courtroom than a school, with the threat of accusation and punishment never too far from our minds. This of course, is the crux of the entire play, as we question Weicheng’s innocence after the damning character he’s initially painted with, utterly disregarding classroom etiquette and playing increasingly vicious pranks. One feels for the modern student, where bullying goes beyond pure physical violence, and in fact, might have only gotten worse with the advent of social media and using it to assassinate one’s character in an instant. 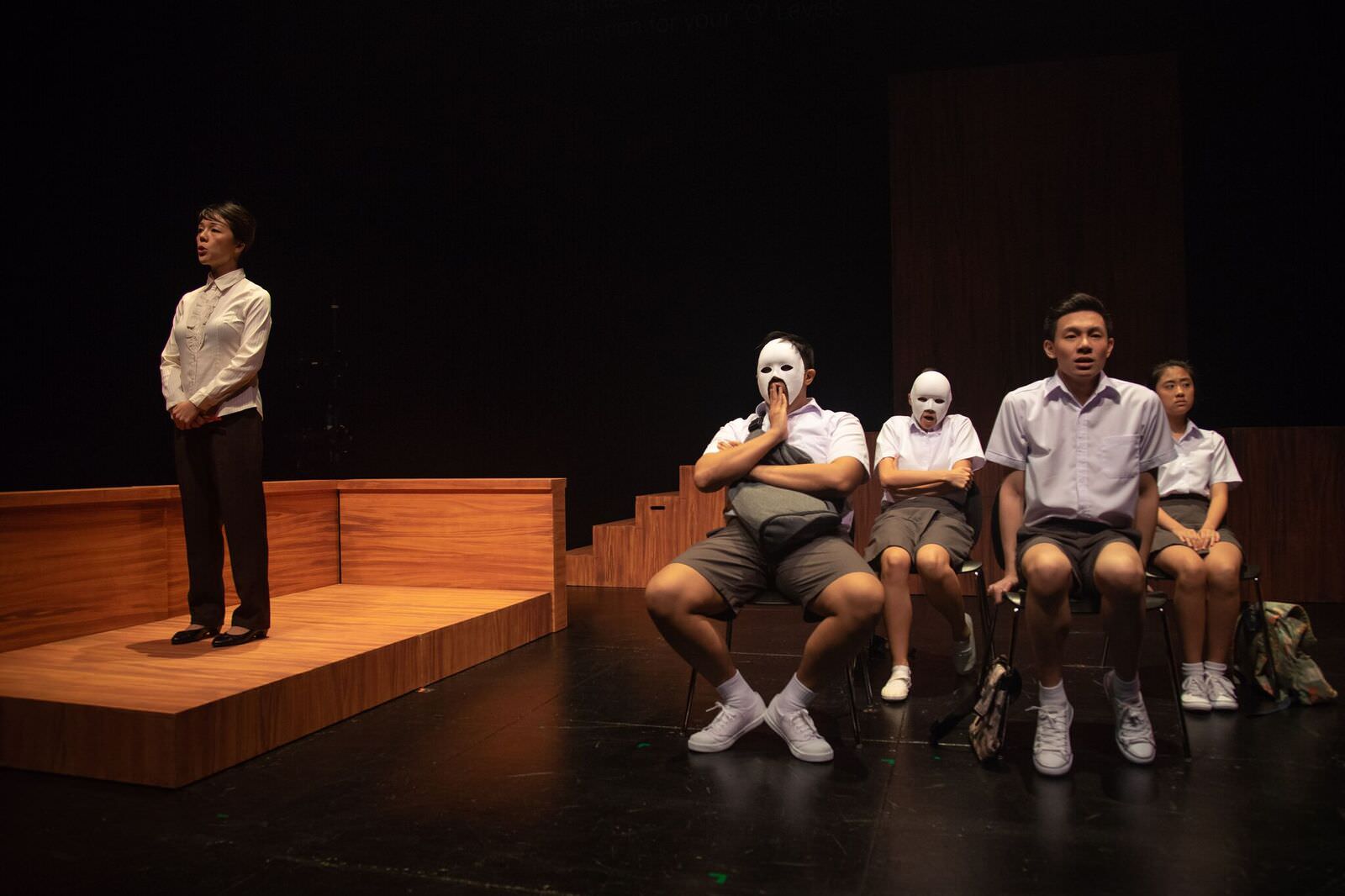 Praise should also go to the cast for portraying their characters well. As Weicheng, Terry Tan brings his character on a journey, from utter annoyance to one where we begin to feel sorry for him, as his classmates do a vicious about turn on him, while as Jasmine, Pearl Hoo captures the character’s naivete and fears in the dreamy lines she is given. 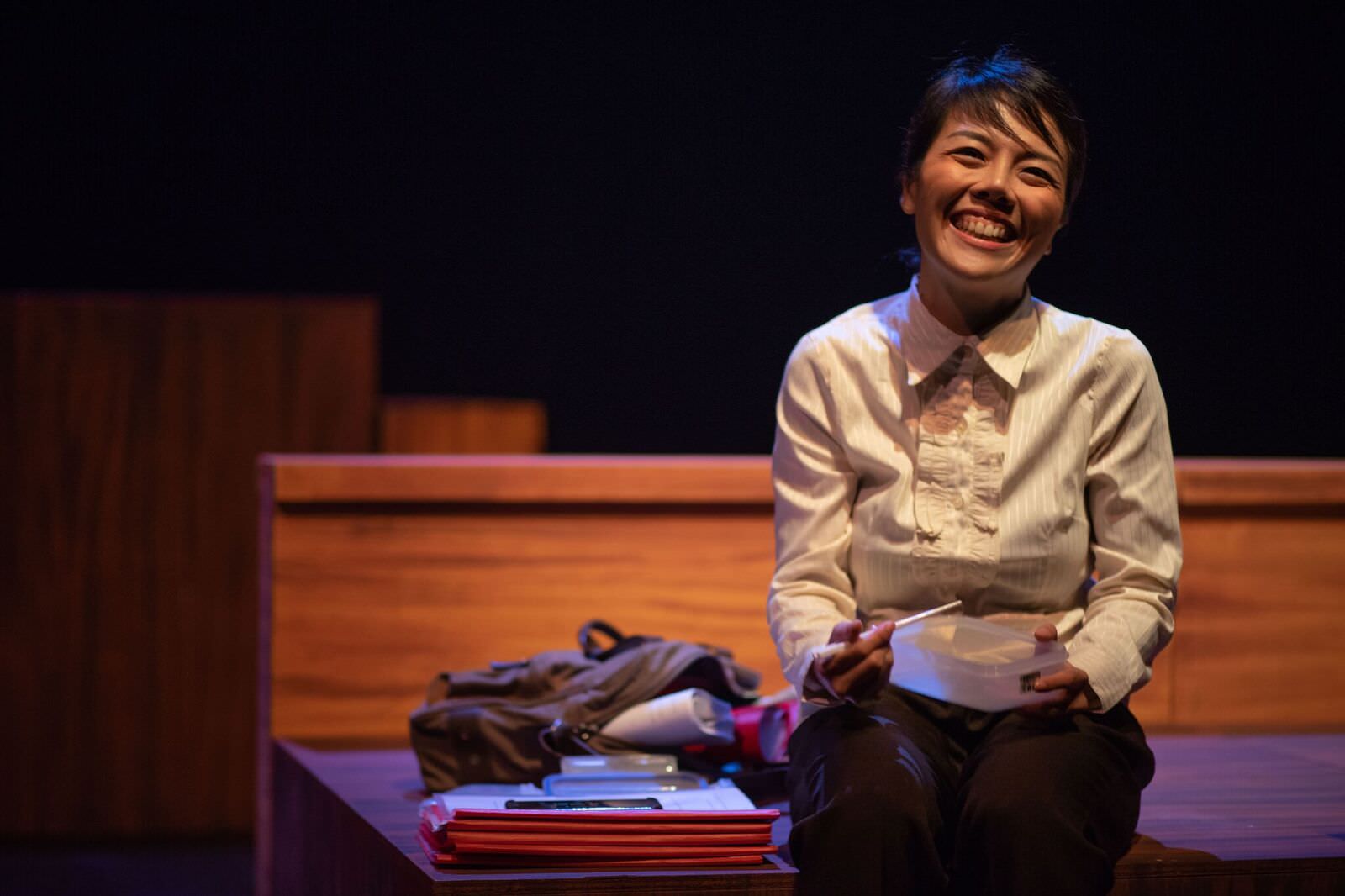 Audrey Luo, as our lead Ms Lim, portrays the strict severity of a typical Chinese teacher, while giving her character depth in small moments, from finding herself lost in quirky fantasies a natural, dark devolution of that, as she eats her dinner alone while watching inane television shows on her screen, her hopelessness and pessimism increasing with each repetition and highlighting the often unseen plight of teachers that go on behind the scenes. In addition, Ms Lim is herself bullied by the bureaucracy of the school system, and one felt that it was important to highlight how even though teachers are adults, they themselves lead their own lives and come with their own set of problems, yet are still expected to remain role models to their students. 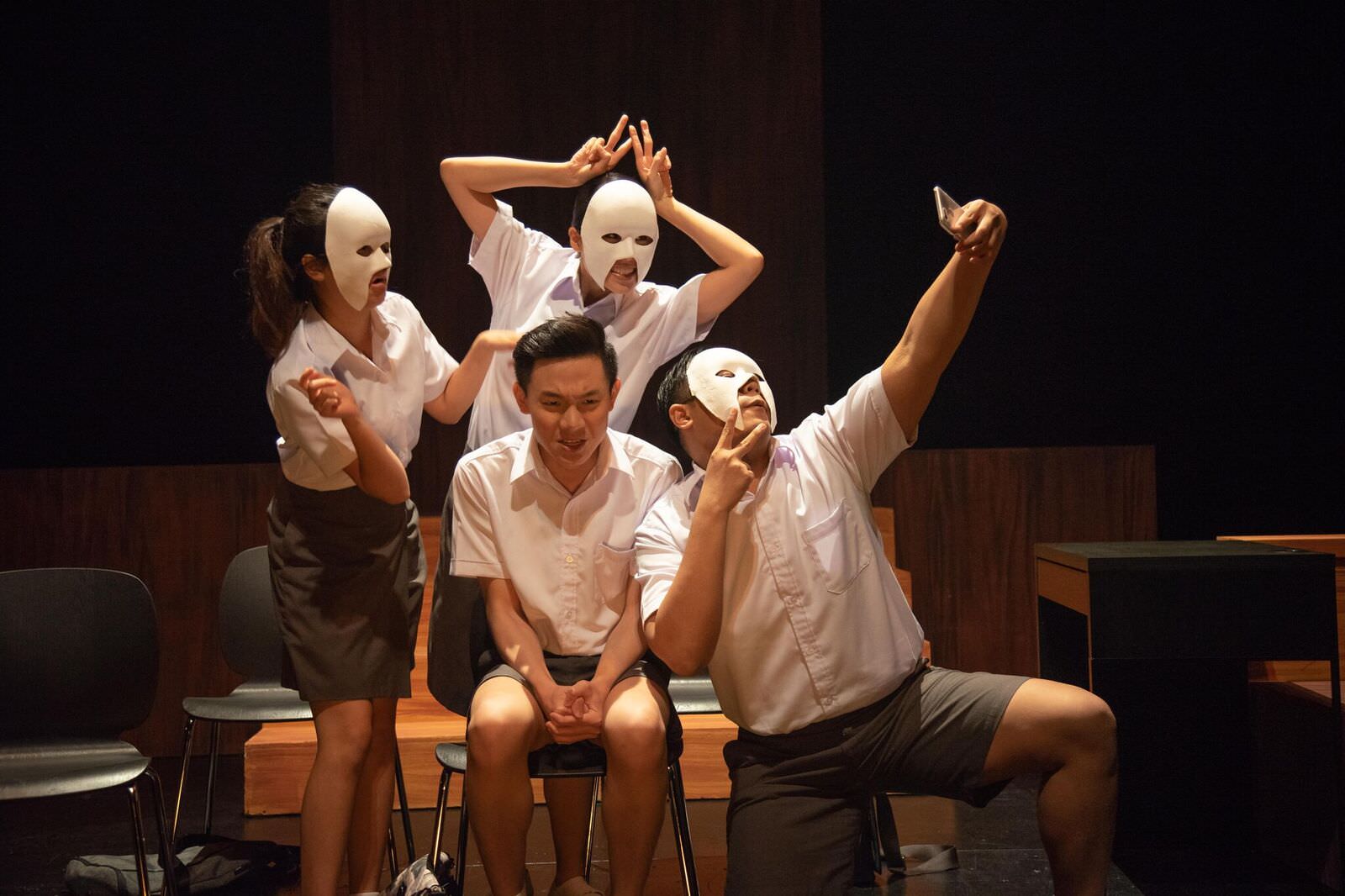 Anchored by a pertinent theme that remains fiercely relevant even today, Because It’s Fun is a good attempt at showcasing The Fool Theatre’s ethos of bringing together multiple languages and performance styles to craft a quintessentially ‘rojak’ Singaporean show. While it does end on a rather pessimistic note, Because It’s Fun is a timely reminder that leaves its audiences questions of morality, and if perhaps we ourselves might be guilty of ‘blood’ on our hands as bystanders who did not intervene when the time called for it.

Because It’s Fun plays at the Drama Centre Black Box from 12th to 21st October 2018. Tickets available from SISTIC

0 comments on “Review: Because it’s Fun by The Fool Theatre”