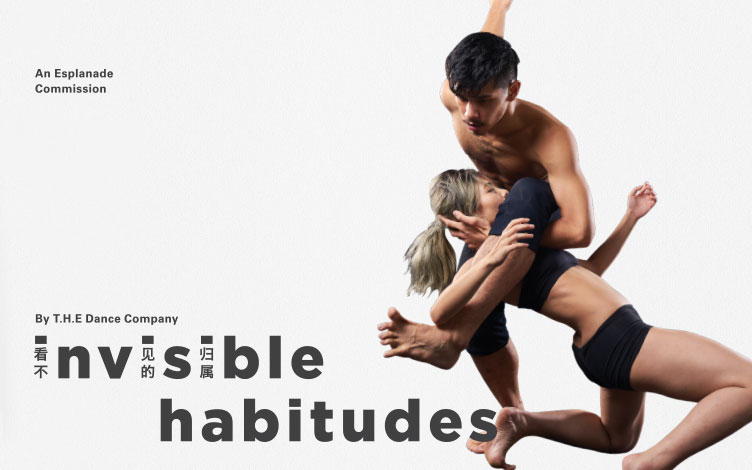 Exploring interpersonal relationships through the most primal facets of the human condition and intense choreography.

While often associated with free performances, for da:ns Festival 2018, T.H.E Dance Company has premiered the very first full-length ticketed dance performance at the Esplanade Outdoor Theatre, beautifully set against the backdrop of the Marina Bay skyline. Choreographed by T.H.E artistic director Kuik Swee Boon, Invisible Habitudes’ creation was born from T.H.E’s methodology of “hollow body”, a form of improvisation that links mind, body and heart into one. In the performance, T.H.E’s dancers take on the concept of finding a fluid, comfortable identity in a world of noise and wildly differing opinions, in an attempt to express and reaffirm one’s individuality through memory, childhood, culture and ethnicity.

Before the performance begin, all six dancers were already onstage, exploring and navigating the space, while composer Wang Yujun created a live ambient soundscape, an atmospheric experience enhanced by the pitter-patter of light rain falling all around us. On the stage, two similar set pieces were set up, with an unconventional structure and a mirrored ‘lid’, almost like giant jewellery boxes. When they open, not only do they reflect the dancers onstage, but as audience members, we too caught glimpses of ourselves metaphorically forming part of the performance as we are reflected in them.

Throughout Invisible Habitudes, the overarching themes of the individual versus society are clearly seen in the way the dancers move and interact or break away from each other, emphasising the ensuing confusion and fear born of the rapid political and social changes happening each day. How then can we promote inclusivity and compassion to counteract these forces?

In one instance, we see dancers interlocking their hands and moving as one, while a lone dancer (Brandon Khoo) breaks away and stands apart from this group. These sequences are as beautiful as they are excruciating to watch, the effort and energy expended by these dancers keenly felt by the audience as they focused all their concentration on the movements at hand, maintaining their poise, balance and strength in every stride, stretch and crawl.

There is a sense of fear and solitude running throughout the performance; one sees this in sequences such as when Lynette Lim looks straight into one of the mirrors before it suddenly flips open to reveal Anthea Seah hiding within. This leads to a solo from Lynette as she enters a trance-like state, the music only increasing in both volume and tempo as she paces and whirls faster and more frenetically than before. The dancers then begin to surround and dance around and with the box, their coordinated movements causing a curious effect to take place, and it feels as if the box itself, as it swirls and spins, is a source of emotion, each dancer swallowed by these feelings as they become enraptured and entranced by unknown forces.

These movements only become more chaotic before Brandon returns to the group, now bare-chested and fighting back against the roar of social conformity to assert his individuality. Dancers exchange positions, moving in and out of the boxes, which seems to be a source of hindrance, as they struggle and shout. Eventually, Billy Keohavong manages to escape the fold, with a triumphant burst of energy that resonates with and encourages Ng Zu You and Klievert Jon Mendoza to follow suit. As this happens, the dancers seem to address each other and now adapt to it as they move with new understanding, sussing each other out in an attempt to recover through compassion, having broken away from the phalanx and pressures of greater society.

Back in the box, Brandon and Lynette continue to struggle, their bodies vibrating and shuddering along with the soundscape, while Billy and Anthea return onstage, both showcasing immense strength as they take courage, one leading the other into the great unknown as their bodies become intertwined with one another, supportive in their combined might. Towards the end of the performance, Brandon returns once more and looks into the distance as if wondering what comes next. Without fear, taking small but measured steps, he musters up the courage to move forward and the others soon follow. While the dancers finally begin to calm down, Billy decides at last to shift the mirror box aside, ‘speaking’ and sharing his story through his own native language and interpretive dance, as they begin the process of understanding in the hopes of better days to come, finding their own private group as they choose to assert their own identities and recover in the aftermath of the chaos.

With strong direction and choreography from Kuik Swee Boon, Invisible Habitudes pushes T.H.E’s dancers to the very limits of their abilities, resulting in an abstract but determined work of pure self expression, emphasising the need for greater connection and compassion in today’s world. Collectively, the T.H.E dancers have given their all, the amount of physical and mental strain clearly written on their faces by the end of the performance. Yet it is this energy that amazes audiences as they watch on in awe at the boundaries of the human body T.H.E brings them to, resulting in a powerful performance and perfect way to end off T.H.E’s 10th Anniversary and final show of 2018.