What is it about Singapore that captures our local spirit in its entirety? In L’arietta’s latest production, the local chamber opera company attempts to do just that in their own way as they presents A Singapore Trilogy.

Comprising of three chamber operas composed by Dr Chen Zhangyi and with libretto by Jack Lin, A Singapore Trilogy examines three groups of Singaporeans at different stages of their lives as they engage in quintessentially local pastimes – eating, shopping, and even drinking kopi. While two of the works have previously been staged, a brand new work has found its way into the trio to complete the trilogy, and was presented alongside the other two works at The Arts House in their entirety over this weekend. Each of these chamber operas have appropriately enough, been directed by theatre veteran Nora Samosir, who has seen this production through from its inception to now, her knowledge and experience no doubt an asset to delivering L’arietta’s message and key to training the younger artists involved, leading to a strong working partnership. 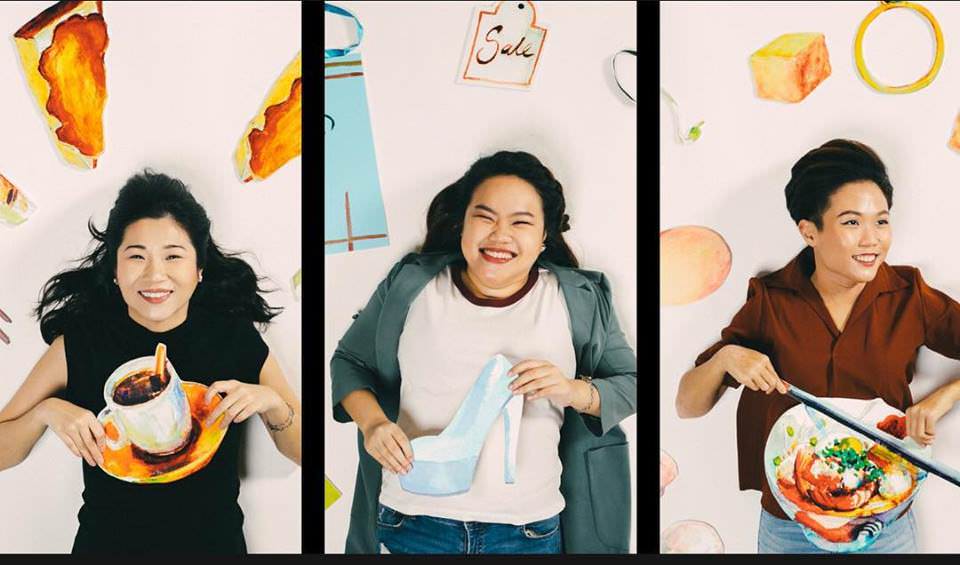 Playing across the Living Room and Blue Room, we started with the trilogy’s latest work, Kopi For One. Accompanied by a piano, flute, clarinet, violin and cello, this piece, while armed only with a minimal set of a table, two chairs, and coffee paraphernalia on a shelf, we are thrust right into the kopitiam setting with a kopitiam aunty (Ee-ping), complete with ‘good morning’ towel, who arrives onto the scene to begin cleaning the tables (well summarised in a opening number, full of typical groans and aunty banter). It is at this point that a woman (Akiko Otao) makes her appearance, catching the aunty by surprise as they reunite with a smile over a song. Though simple, one appreciated little details such as how the woman declines a milo dinosaur of her childhood to order a black kopi o instead, showing her maturity from child to adult with her change in tastes. 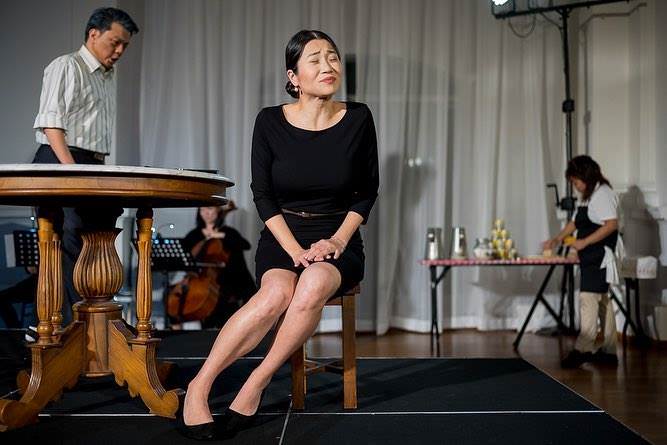 While it is true that music takes precedence in an opera, there are times that the ‘conversation’ is somewhat drowned out by the instruments, which hampers the clarity of the words a little. Still, it is to the credit of the performers that they push past that limitation and exude enough energy and expression to bring out the emotions in every scene. With the plucking of the cello’s string, an air of mystery fills the air and an older gentleman (Jonathan Charles Tay) makes an appearance.

Dressed in comfortable clothes suited for just sitting down and enjoying a cup of coffee at his favourite coffeeshop, Jonathan Charles Tay embodies his role and hits every note perfectly in his entrance, both technically and emotionally, filling the air with his voice and capturing our attention from start to end. But something seems amiss – while the coffeeshop aunty sees him, even offering him his usual drink, Akiko does not, distracted by her own thoughts. Jonathan moves over and joins her at the table, and when the two of them begin a duet, it becomes clear that they are father and daughter, as they sing of memories, the good times spent with each other and a twinge of regret that they didn’t do it more. As Jonathan then leaves the coffeeshop, the coffeeshop aunty returns with his drink, setting it down at Akiko’s table and asking where her father has gone. Akiko appears slightly shocked, as she reveals that she has just returned from her father’s funeral. Ultimately though, whether or not it was a ghost no longer matters, but what happens after, as Akiko and the aunty share an embrace over their loss, before sitting down to have a conversation over a cup of kopi, remember her father and reminiscing about better days as they work through this grief together. 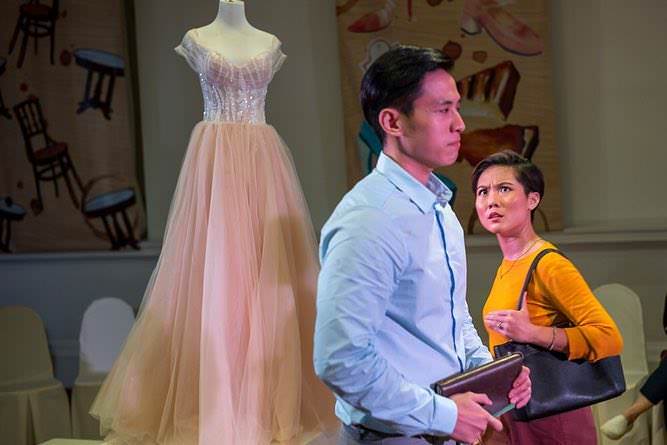 Kopi For One was followed by an intermission and change in room, where L’arietta also served up kueh, tea and kopi, in line both with the new work, and adding a nice homely touch on a cold, rainy day before we entered the next room for Laksa Cantata. Music beings playing from the moment we step in, and all it takes is 3 wedding dresses on display to make us realise it is set in a bridal shop. Here, Ng Jingyun and Samuel Ng play a young couple preparing for wedding day, the former a spunky, fun young woman with a fire inside of her, while the latter very much wanting to please his fiancee, yet can’t help his straying eyes. But it’s not another woman he’s eyeing – it’s a piping hot bowl of delicious laksa.

Samuel’s titillating description of the laksa left the audience tickled, with its velvety gravy and tantalising taste leaving him drooling hitting a familiar note with many members. Samuel and Jingyun are both fully committed to their roles as they confront each other and speak about what they want or are willing to lose in the relationship, making the gap between audience and performer feel nonexistent as they spoke and sang with sincerity and truth. As they decide to come to a compromise, they break out into a dance, reconciling their differences by agreeing to disagree, and reminding us all of how wonderful it is to fall in love again, and how many stories and journeys these two will have together there are still to come. 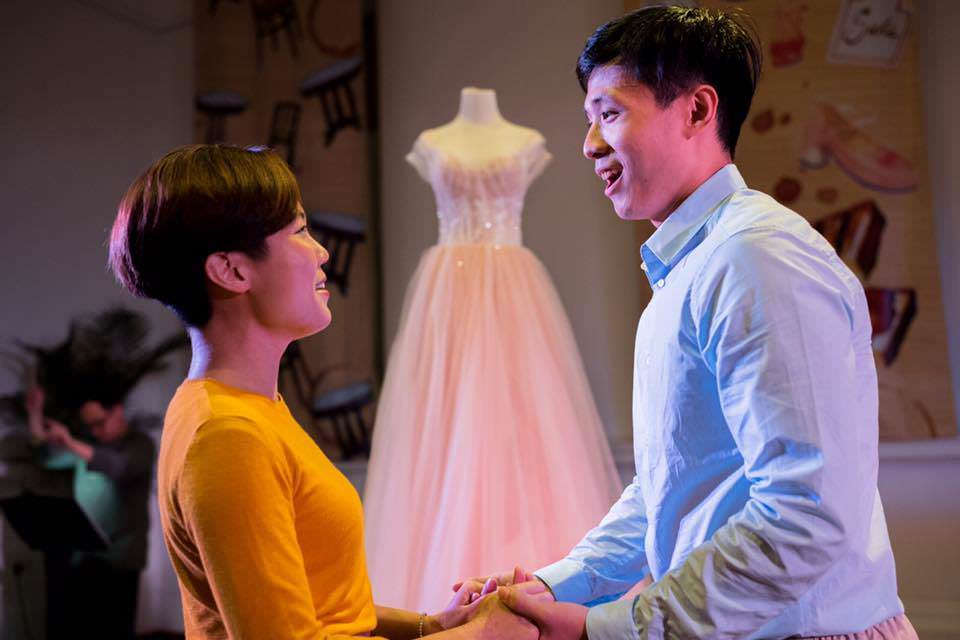 In the final chamber opera, we remained in the same room as a quick set change introduced us to Window Shopping, begging the question ‘just how many shoes can one possibly own’? We feel immediately as if we’ve been put on a shopping adventure as we are tasked to find the perfect shoe, with Phoebe Chee and Felicia Teo playing the younger and older version of the same woman respectively and showcasing how different their approach towards money has become. The excitable younger self played by Phoebe is fresh from the excitement of her first pay check, willing to spend it all in a burst of joy, while the older self played by Felicia has long passed that, worried instead of the other financial burdens she has to bear, embodying a sense of newfound class as she delivers her lines effortlessly amidst her emotional struggle. As they end their shopping journey, one sees the stark difference a few years can have on a person as Felicia walks away empty handed, while Phoebe tries on a shoe. Life isn’t about the product you buy, but the journey one takes that enriches us to become better people. 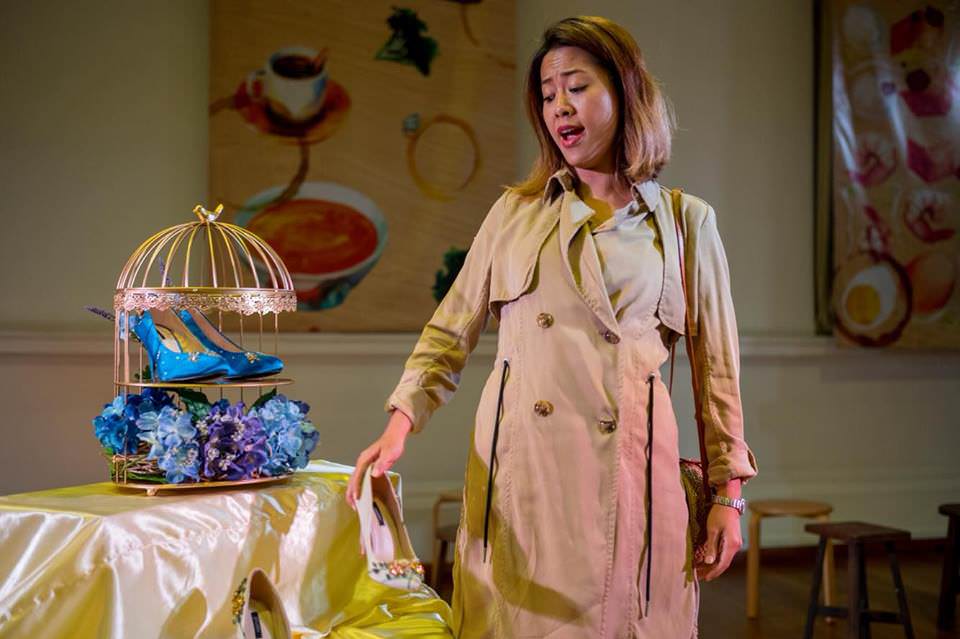 While certainly a bold statement to title it A Singapore Trilogy, L’arietta pushes past the limitations of their space to produce not one but three complete works that adhere to their ethos of cosy, accessible opera just about anyone can appreciate, showcasing a good mix of both veteran singers and young talents. It takes a lot of work to get to where they are today, and we can only look forward to their next performance as they continue to mould the scene and groom the talents of tomorrow. What one is left with is how all of these pastimes, whichever one we choose to indulge in, there is something in each that speaks to us profoundly about what it means to be Singaporean, connecting us as one people; we love and laugh with our culture of food, crave the thrill and adrenaline rush of window shopping,  and making us very much crave sitting down at the end of it all for a nice cup of kopi, and just letting the world pass us by.

A Singapore Trilogy played the Blue Room and Living Room at the Arts House from 12th – 14th October 2018.

0 comments on “Review: A Singapore Trilogy by L’Arietta Productions”