With a theme like 界(Jie): The World(s) We Live In, it’s impossible for the Singapore Writers Festival not to fill itself with programmes and events that discuss the state of affairs surrounding the world today. At times horrifying with the increasingly dismal state of politics and disasters, at times completely absurd with the odd news we come across, and at times even hopeful, from finding inspiration in the ordinary to endless imaginations, the writers featured this year have some truly varied views on how we should come to engage with the world today. 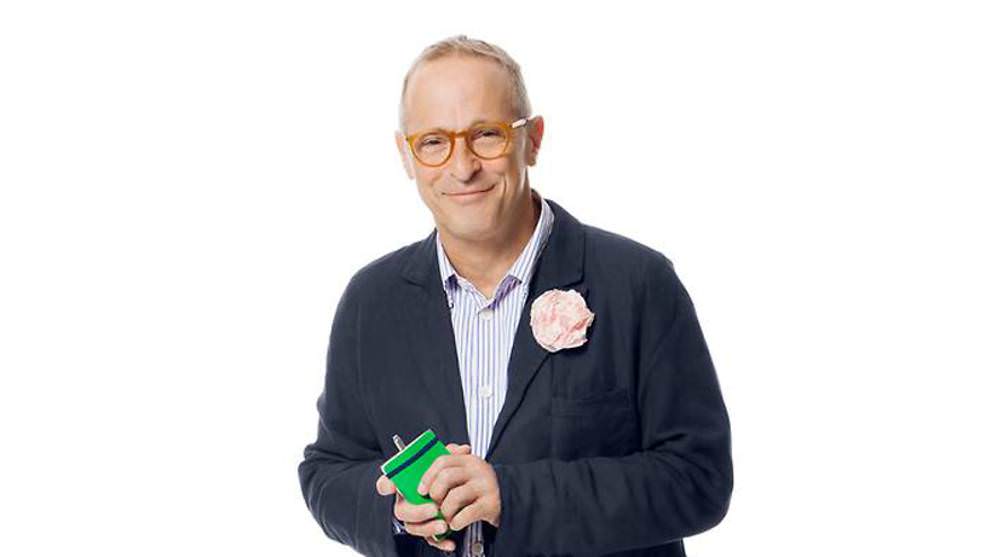 New York Times bestselling humorist David Sedaris is essentially the king of self-deprecating humour. Playing to a sold out house at the Victoria Theatre last Saturday, the 61-year old author of 10 collections of essays proclaims that he is a peddler of ‘the laziest form of stand-up comedy’, choosing to spend the better part of his hour reading aloud selected essays, including his latest collection Calypso (2018). But there’s something special about the human voice that adds a new dimension to his already hilarious essays – hearing him speak, it adds a distinct character to the Sedaris of the written word, we hear his cantankerous tone, his umbrage and his oftentimes absurdist experiences, and there’s an entirely new way we see his work, bursting with more humour than ever. It helps, of course, that his unique voice only adds to the the absurdity of it all (he recalls a woman whose mother listened to his audiobooks mistook him for a woman).

Sedaris’s work is singular, and he is a man who has mastered the art of finding humour in the ordinary. The simplest of acts – waiting in line for a coffee, for example, is given a new lease on life with his exaggerated displeasure at the couple in front of him. He knows exactly how to pace a story (“I have a 12-page attention span,” he declares), moving from a simple, observational recount to a far larger story, spanning minutes to a sudden jump a few months later. He is an expert at linking the unexpected, and making it all come together with surprisingly simple but powerful language that gets to the point, brutal but dramatic, making his work ideal for reading aloud. Sedaris is naturally gifted at finding the funny in things, his attitude and verve with which he makes his points and delivers his punchlines so solid, it hits you right in the chest, a laughter you cannot control that erupts from the very bowels of your being, and certainly, one of the biggest highlights of the Singapore Writers Festival this year.

Over at the Asian Civilisations Museum, authors Mariko Tamaki and Margaret Stohl came together for a discussion on The Power of Superheroines. This is, of course, incredibly appropriate, as both Mariko and Margaret have written for big time comic giants such as Marvel and DC (Mariko on She-Hulk and Harley Quinn, and Margaret on Captain Marvel), and are independent writers in their own right as well (Mariko on one of our favourite graphic novels This One Summer, and Margaret on Beautiful Creatures). The crowd present at the talk was decidedly far less expat-y than at David Sedaris, and certainly, far younger, perhaps owing to the medium which Tamaki and Stohl specialise in. Tamaki and Stohl have an easy chemistry with each other that makes them feel like old friends, both knowing the indie and mainstream industry extremely well, and presenting their voices as females (a minority) within the industry. From the concept of women being ‘afraid’ of power, to simply thinking about stories that go beyond gender, quintessentially human stories about identity, it’s evident that both women are incredibly intelligent and informed.

As fans themselves of the characters and stories they write for, there is plenty of joy in seeing and hearing them speak about topics that are so close to their hearts. Being a fan of comics ourselves, it’s of course wonderful to hear them namedropping authors and works such as Gene Luen Yang and his work on New Super Man (set in China) and Noelle Stevenson and her entry into the industry with Nimona to her upcoming work on Netflix’s She-Ra reboot.We live in an age of change, where literally anything is possible as the industry opens itself up to new voices, new writing, and new faces. While certainly we are nowhere near perfect, Tamaki and Stohl’s voices brim with hope as they filled the room with possibility, two women who are doing the best they can to tell the stories they want to in the writers’ rooms, and absolutely, authors whose work is important, exciting, entertaining, and deserves to be read.

We ended off our weekend at the Singapore Writers Festival with a talk by Scottish author Irvine Welsh, famous, of course for his bestselling debut 1993 novel Trainspotting. Welsh spoke about the state of governance and how we ought to live in light of divisive politics in this “age of assholes”, appropriately enough at the Arts House Chamber, the former Parliament chamber. It is fascinating to us how a man who uses the vernacular of the working class has become so enamoured and beloved by members of the middle class, for having “elevated filth to high art”, his words brash but always well thought out, perhaps, one of the seminal examples of a model modern man who occupies transient spaces in terms of class. Welsh, from a working class background himself, speaks intelligently about the failure of power structures, and how the mess of situations like Brexit has led to him half-jokingly suggesting a lottery system in lieu of our current one. Darkly humorous, exciting in his speculations and earnest in his speech, Welsh proves his work is not merely for shock value alone, but depicts bleak worlds that are at times all too real, touching on facets of humanity that go beyond class, beyond background to remind readers, much like his talk, that we must go on despite this divided world. 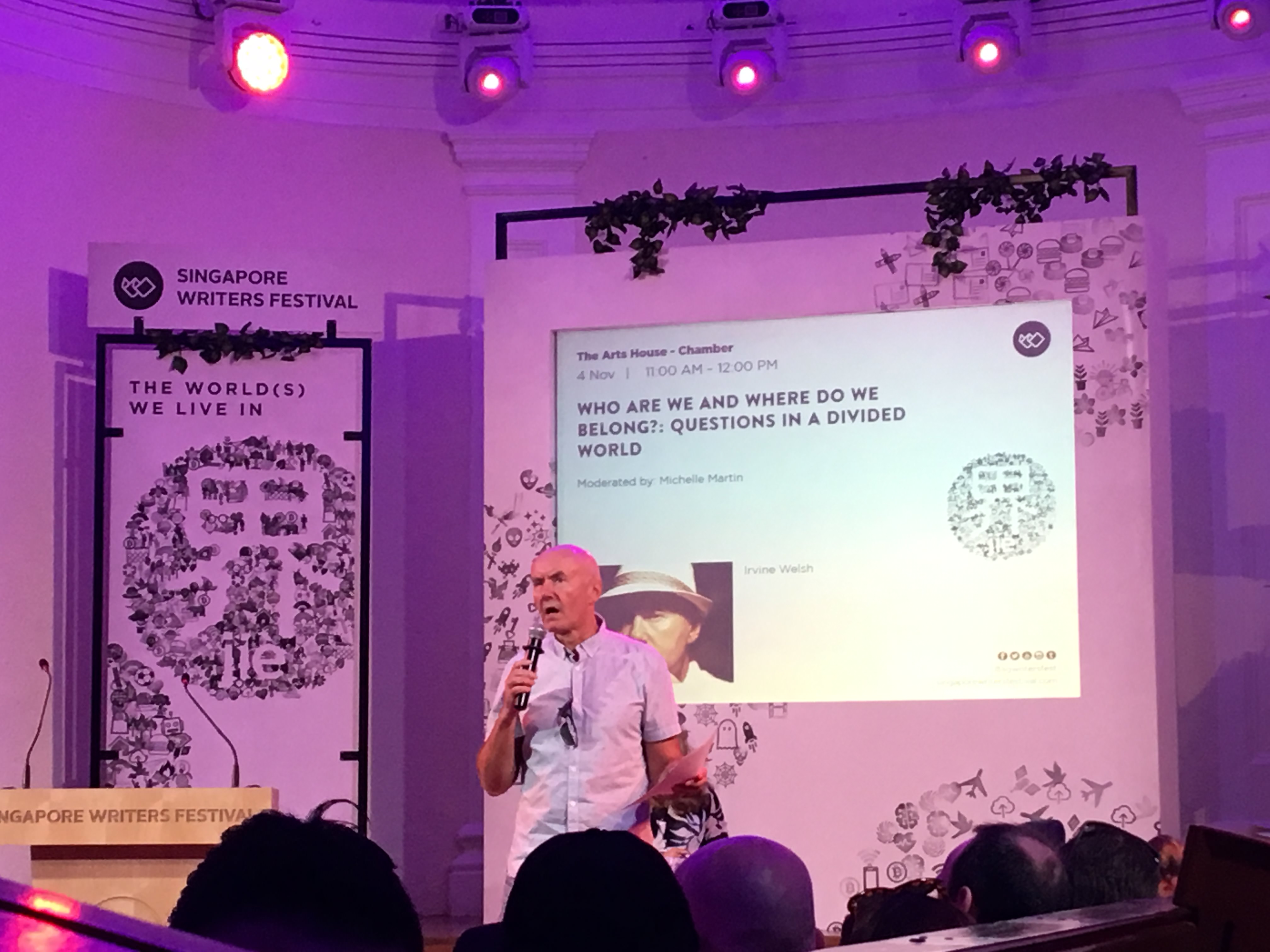 The Singapore Writers Festival 2018 takes place from 2nd – 11th November at the Arts House. To attend events, visitors must either purchase a festival pass, allowing access to over 100 events, or purchase separate tickets for specific events. For full ticketing details, check out the SWF website here, or their Facebook

0 comments on “Singapore Writers Festival 2018: The State of The World According To David Sedaris, Irvine Welsh, Mariko Tamaki and Margaret Stohl”